A healthy recipe for rich dark chocolate brownies with a creamy cheesecake layer swirled on top. So decadent, so good—and just 80 calories! 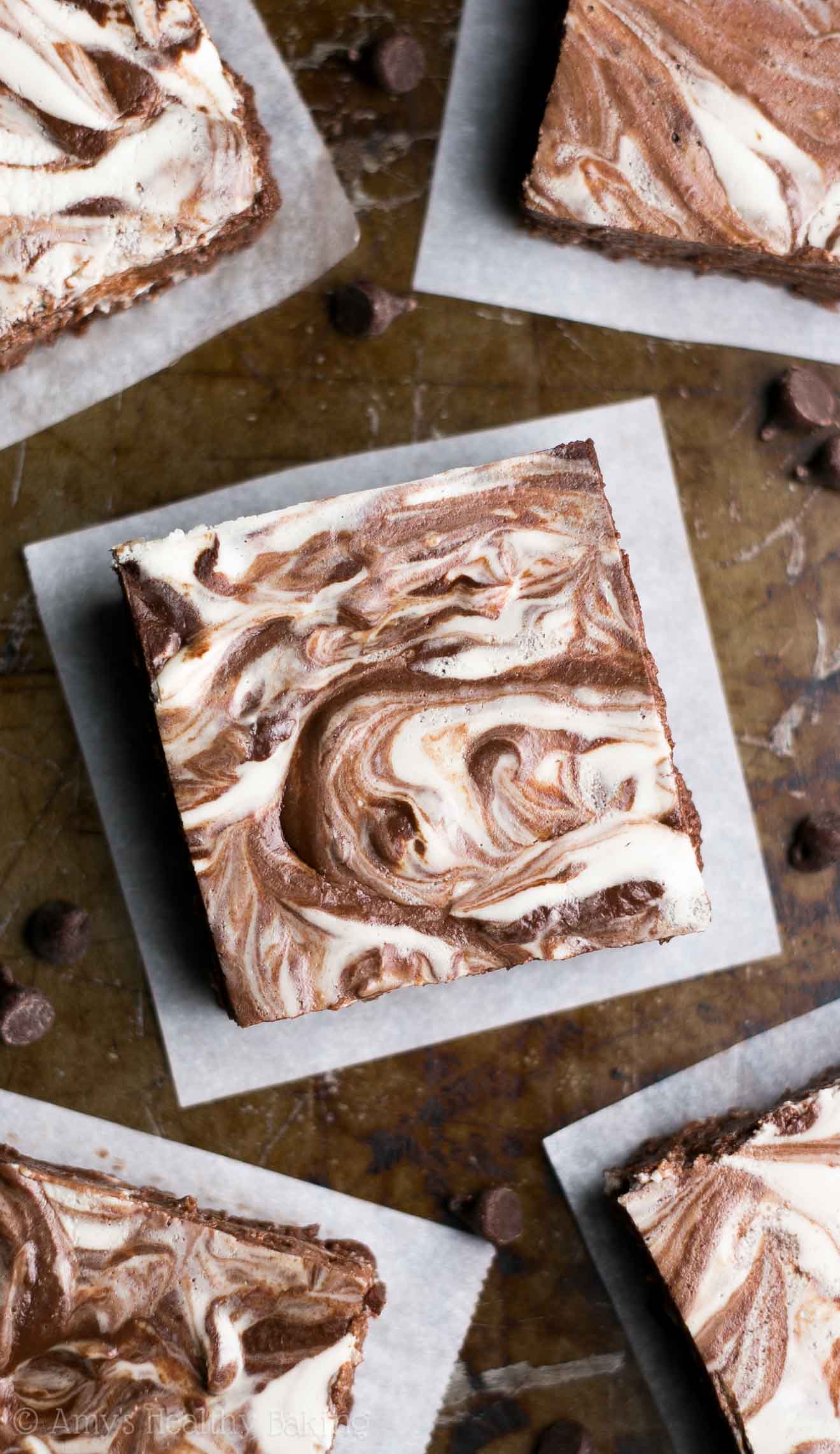 When I was in 6th grade, my grandparents brought my dad and me along on one of their trips to Manhattan. Since my grandma grew up in the Bronx, they flew back east at least once or twice each year to catch up with old friends, soak up the culture, and visit their favorite museums and restaurants.

They reserved a suite for the four of us at an upscale hotel, located just a few blocks away from Central Park, and the bedroom windows overlooked the bright blue awnings of a market where we purchased fresh fruit and jumbo-sized muffins for breakfast each morning. (Although we never went, there was even a theater attached to the hotel!)

Because Grandma loves to research and plan, she printed out a detailed itinerary for me outlining our week-long vacation, along with a binder packed full of informational printouts and brochures for all of the activities on our list. Two Broadway shows, a ballet performance, the Natural History Museum, a ferry ride to Staten Island, the Empire State Building, lunch at Tavern on the Green, a trip to Bloomingdale’s, an afternoon Yankee game (she’s the one who helped ignite my love of baseball and taught me how to meticulously record ballgames in a scorecard!)… And more. 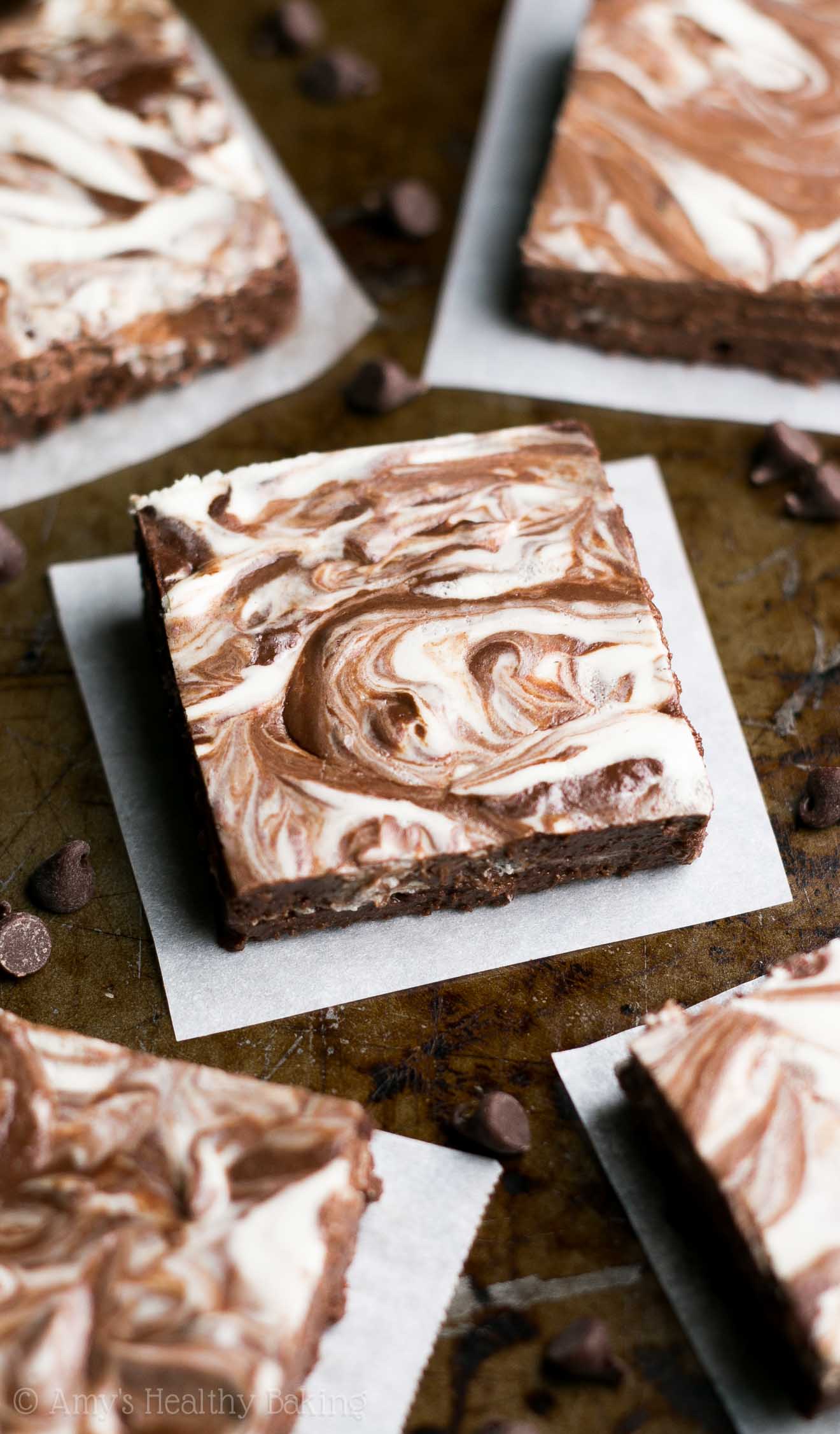 Since my grandparents also passed along their love of food to my dad and me, we dined at plenty of delicious places, too. For lunch on one of our first few days, we stopped by one of their favorite delis, and although I stuck with simple ham and cheese, Grandpa insisted that I sampled his humongous classic pastrami sandwich with meat stacked so high that I could barely open my mouth wide enough to take a bite!

And after one of the musicals, we visited a dimly lit restaurant nearby, one of their preferred spots to sit and sip coffee after a show. At only 11 years old and with no need for caffeine, I planned on sitting politely with the grown-ups while we relived our favorite moments from the performance, but Grandpa sneakily ordered dessert so I’d have something in front of me other than ice water. 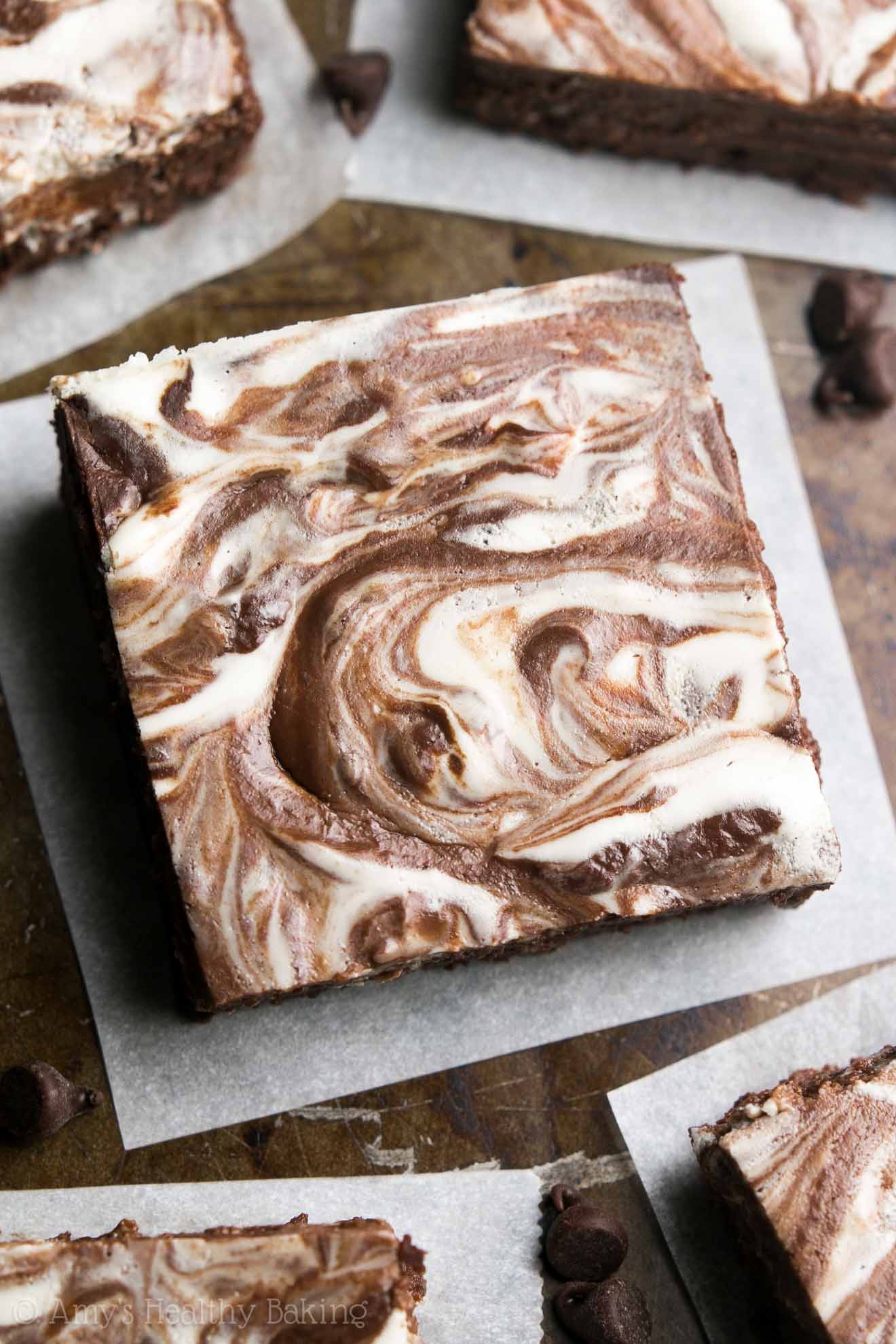 The waiter brought over a generous slice of New York cheesecake, along with a fork for each of us. As my first time trying cheesecake, Grandpa insisted that I took the first bite, so I slide my fork into the creamy dessert and brought it to my mouth.

Since nobody had explained what a New York cheesecake actually was—a rich dessert made from cream cheese, sour cream, and heavy cream—the tangy taste completely surprised me! I took a few more small bites along with everyone else before setting down my fork to give them the rest. At that age, I definitely preferred my desserts on the sweeter side! 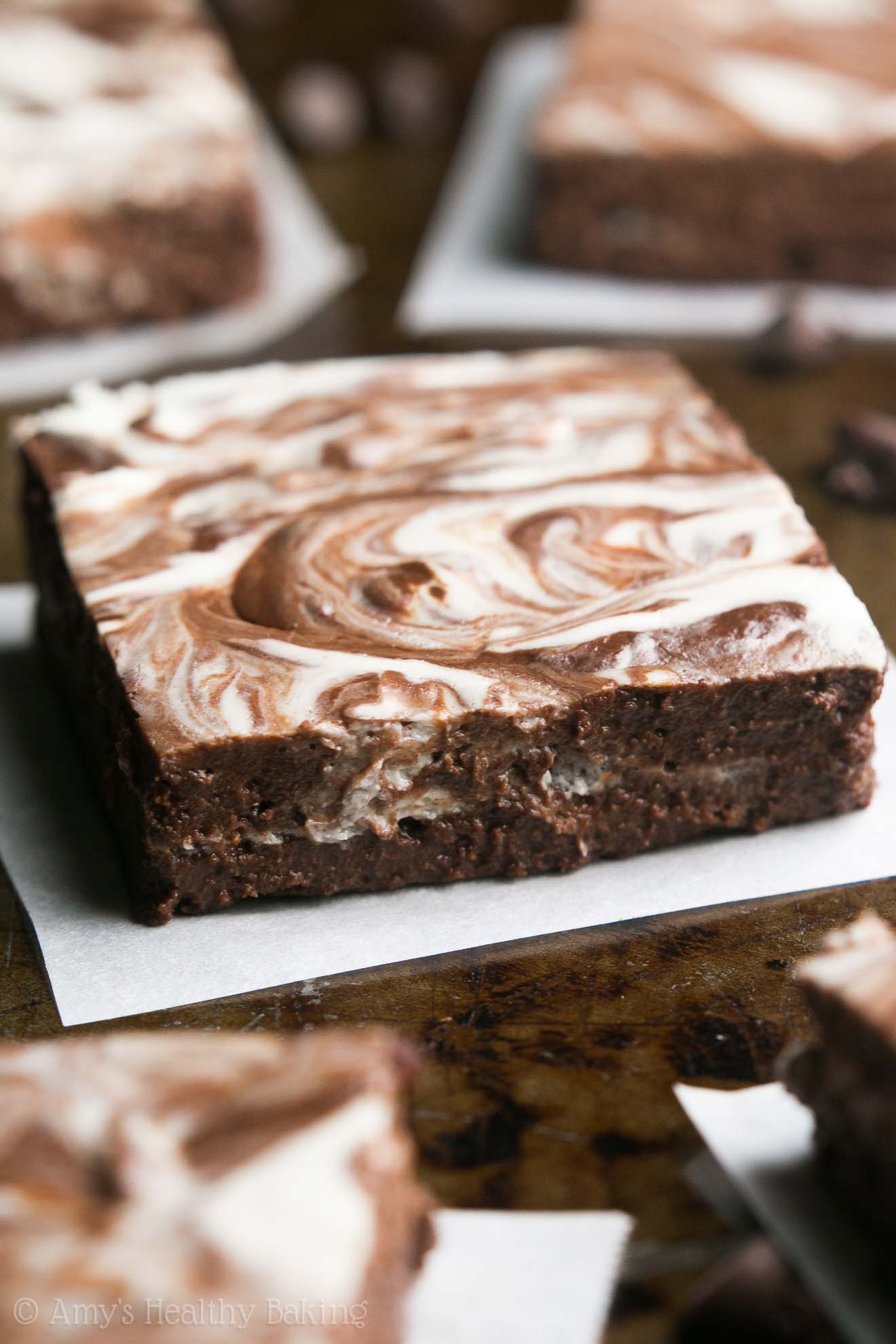 Since I’ve been thinking a lot about my grandparents lately, I decided to bake a dessert I knew they’d love and that reminded me of that incredible trip to NYC… Which resulted in these Fudgy Dark Chocolate Cheesecake Swirled Brownies! Since that vacation, I figured out that I really enjoy cheesecake when it’s mixed with another flavor—fruity, pumpkiny, or chocolaty—and because brownies are my all-time favorite dessert, it just seemed natural to pair them together. Almost too natural… The entire pan barely lasted a few hours! 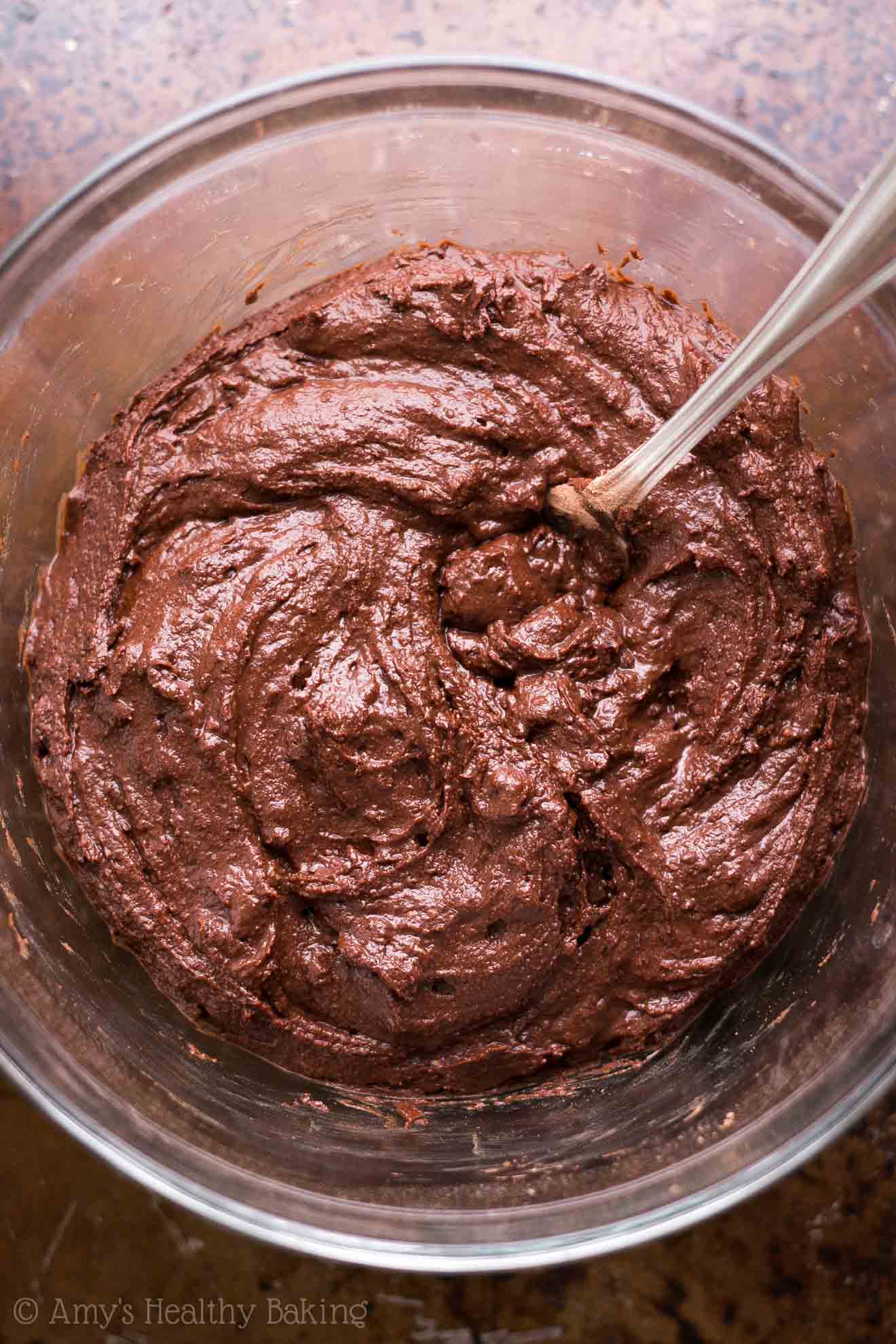 Note: Whole wheat pastry flour would be the perfect substitute!

As for the latter ingredient, you just need regular ol’ unsweetened cocoa powder. Because you’ll use a full ¾ cup, the brownies will already taste really dark, so need for Dutched or special dark cocoa!

However, it’s extremely important that you measure both the flour and cocoa powder correctly, using either the spoon and level method or a kitchen scale. Too much of either will dry out the brownies, and too much cocoa powder will make the brownies taste very bitter. So I highly recommend a kitchen scale! This is the inexpensive one that I own, and I use it every day. It ensures that all of my recipes turn out with the perfect taste and texture—and it’s the best $20 that I ever spent! 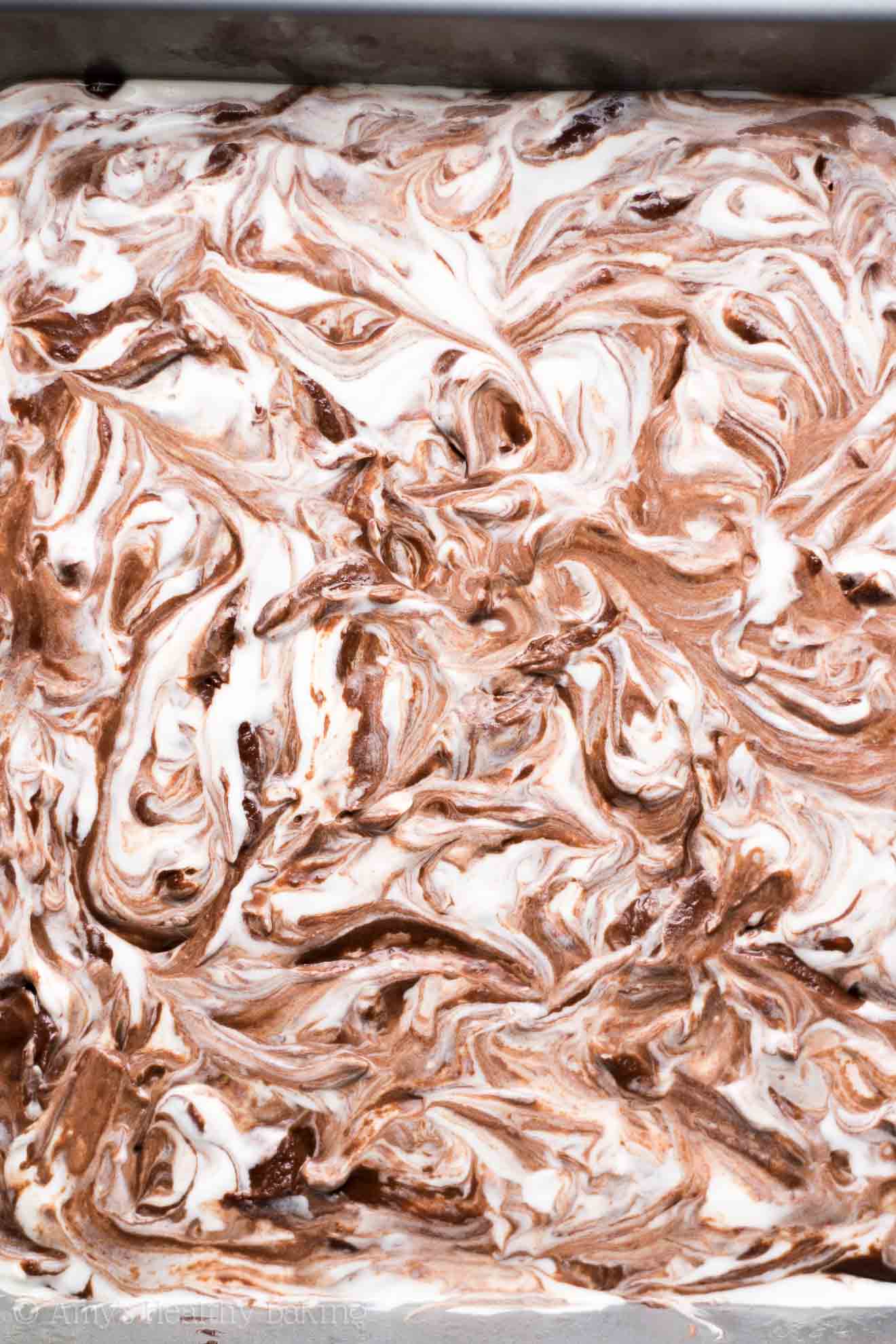 Instead of ample amounts of butter, melted chocolate, or heavy cream to make these brownies extra fudgy, you’ll only use 2 tablespoons of butter. Yes, that’s right! The rest of their amazing texture comes from my favorite ingredient in healthier baking… Greek yogurt! Greek yogurt provides the same moisture as extra butter or heavy cream for a fraction of the calories, and it gives these brownies a protein boost, too!

Then instead of granulated sugar, you’ll use pure maple syrup to sweeten these brownies and keep them clean eating friendly. Be sure to use the good stuff! Avoid pancake syrup or artificial syrup; those contain corn syrup and artificial ingredients. The only ingredient on the bottle should be “pure maple syrup!” You can find it in thin glass bottles or squat plastic jugs near the oats at the grocery store, and I’ve also bought it online. 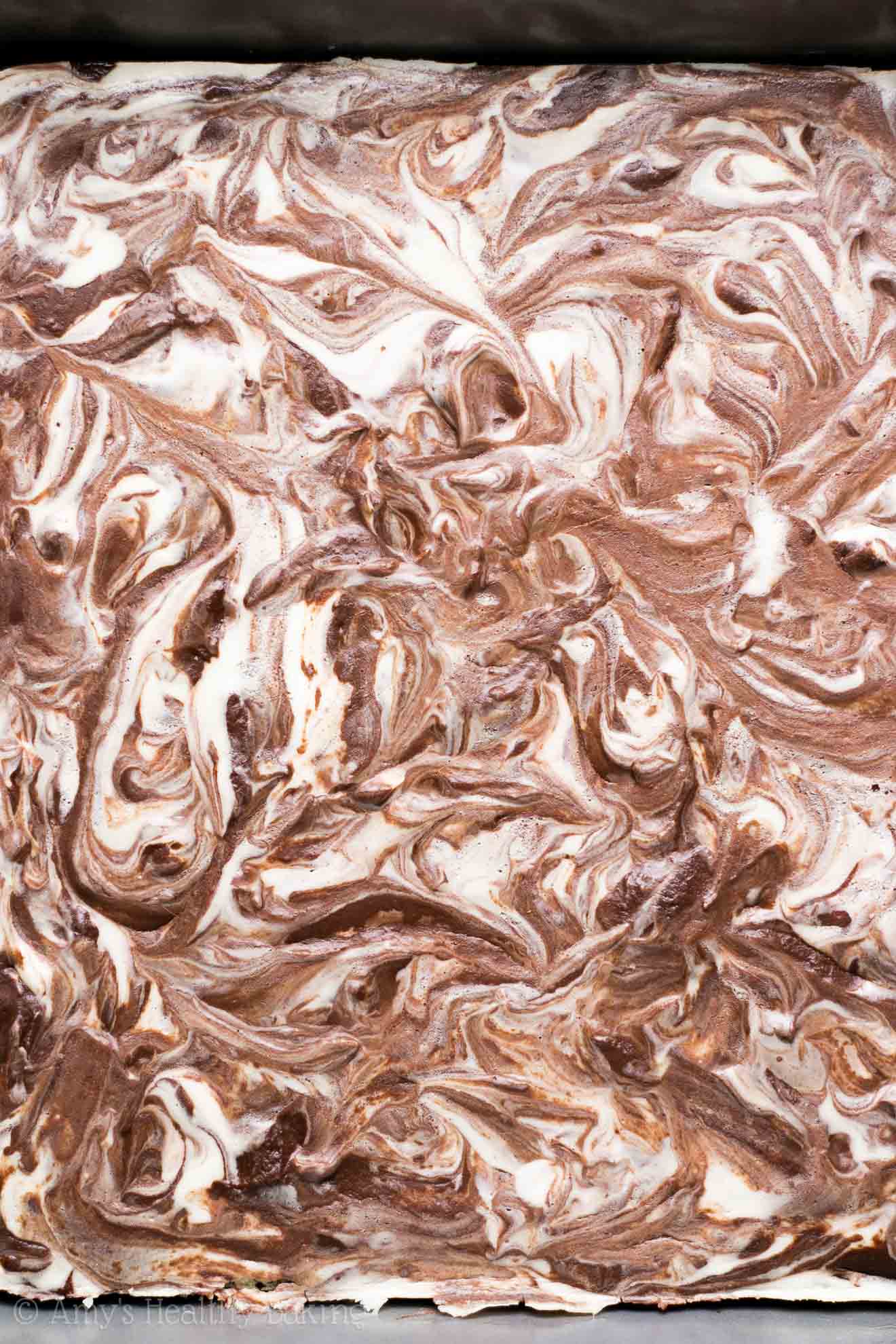 You’ll sweeten that cheesecake mixture with one of my new favorite ingredients, vanilla crème stevia. Stevia is a plant-based, no-calorie sweetener that’s clean eating friendly, and it’s very concentrated. A little goes a long way—you’ll only need ⅜ teaspoon! This is the kind that I buy, and I love its warm vanilla flavor with no noticeable aftertaste. You can find it at many health-oriented grocery stores, as well as online. (And you’ll use it in all of these recipes of mine, too!)

To bake these brownies, you’ll spread the brownie batter into the pan first. Dollop spoonfuls of the cheesecake mixture on top, and spread it out into a thin layer with a spatula. Then, using a butter knife, dip the tip through both layers, and gently lift while turning the knife over (a full 180°) to reveal some of the brownie batter from below. Let both mixtures fall off of the knife; then dip a teensy tiny bit of the tip back into the revealed brownie batter, and swirl it around to spread it out. 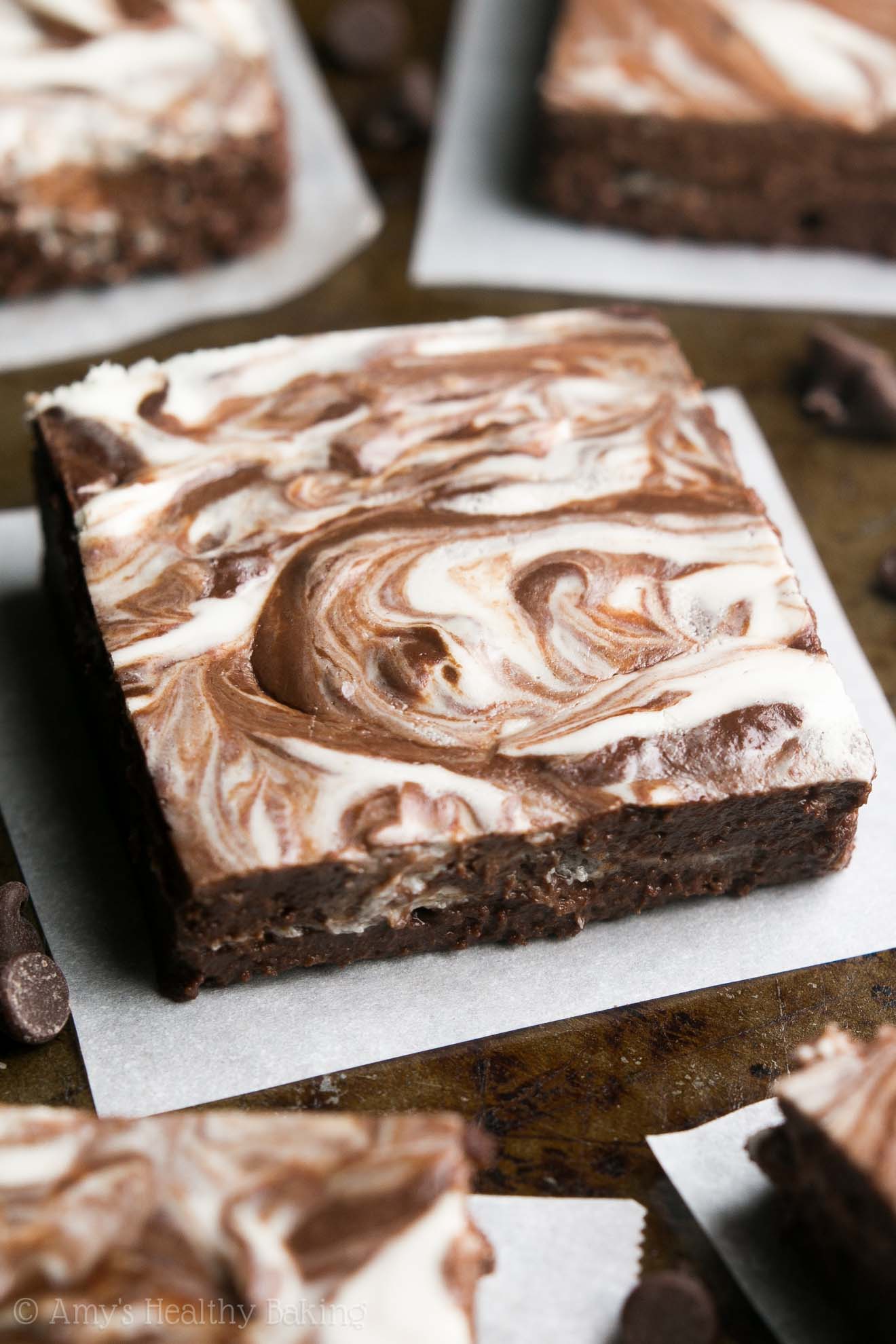 Now… Who’s ready for dessert?? And when you make these, remember to snap a picture and share it on Instagram using #amyshealthybaking! I’d love to see your brownies!

Click here to PIN the recipe and save it for later!
Yields: 16 brownies
These rich brownies are a chocoholic cheesecake-lover’s dream come true! They’re really decadent, similar to the taste of 72% dark chocolate, and the creamy cheesecake takes them over the top. The brownies will keep for at least 5 days, if not longer, if stored in an airtight container in the refrigerator.
Notes: Neufchâtel (⅓-less fat) cream cheese may be substituted for the Greek yogurt cream cheese.

Stevia powder (1 ⅛ teaspoon) may be substituted for the vanilla crème stevia. Alternatively, 3 tablespoons of granulated sugar, brown sugar, or coconut sugar may be substituted. I do not recommend substituting another liquid sweetener (i.e. honey, maple syrup, etc.) because it will make the mixture too runny.

The Healthier Chocolate Treats cookbook is perfect for any and all chocolate lovers. Whether you enjoy chocolate occasionally or every single day (that’d be me!), there are plenty of goodies inside for you! Healthier Chocolate Treats contains 50+ brand new healthier recipes. These recipes have never been seen before or appeared on my blog. You won’t find them anywhere else! And yes—every single one contains some form of chocolate. Whether you prefer milk, dark or white, there are lots of treats inside for you!     What Inspired You to Write Healthier Chocolate Treats? I have always loved chocolate. Every Halloween throughout my childhood, I inverted the entire contents of my bright … END_OF_DOCUMENT_TOKEN_TO_BE_REPLACED