An easy recipe for guilt-free chocolate chip cookies made in the crockpot! Sweet, chocolaty, almost-fudgy-like-brownies bliss… Nobody ever believes these are healthy! 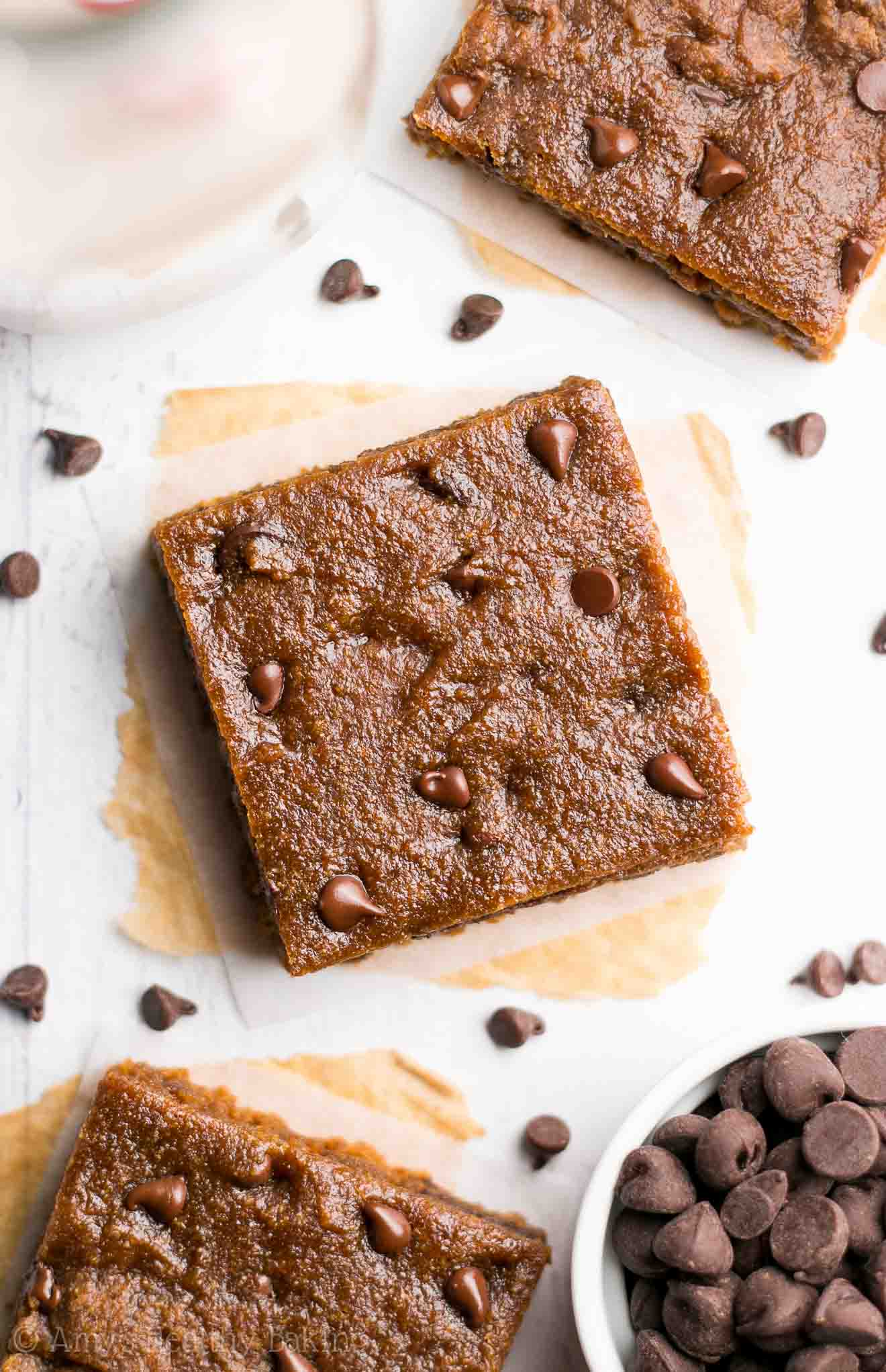 Although most people scattered as soon as finals week finished, I stayed in my college town after my sophomore year and worked in an organic chemistry research lab. Every weekday after exercising, showering, and savoring a bowl of my favorite Trader Joe’s cereal, I hopped on my black-and-teal road bike, pedaled two miles through city streets and half of the campus, and locked it to one of the many racks outside of the chemistry building, along with about a hundred other bikes, before climbing the two sets of stairs to the third floor.

Once inside, I tugged off my backpack and flipped through my notebook, skimming over my notes from the previous day, to scribble down a schedule for that morning and afternoon. After setting down my pencil, I slid on my stiff white lab coat, a set of safety glasses, and a stretchy pair of bright purple nitrile gloves, then began measuring out chemicals on our highly sensitive scale, mixing them together in small round glassware, and analyzing the results a few hours later.

As one of only two undergraduates in the lab, I spent the majority of my free time in between experiments and during lunch breaks talking with the many graduate students about anything and everything: chemistry, reaction mechanisms, baking, baseball, life in general… We arrived before 9 am and stayed until dinner, or sometimes even until after the sun disappeared, so we had lots of time to chat—and with temperatures consistently around 100°F outside, we only half-joked about enjoying the “free” air conditioning and keeping our apartments’ electricity bills low every day!

But since we each possessed a huge sweet tooth, my roommates and I still baked a few times during that summer. (No, they weren’t chemistry majors too—just me!) We tried to turn on the oven during the “cooler” days where the temperature barely reached 90°F to avoid turning the entire apartment into a sweltering sauna, and we almost always picked something quick and classic. Chocolate chip cookies appeared on the cooling racks the most, and paired with a tall frosty glass of milk, we slowly savored every warm, gooey bite of those treats while sitting in front of our portable fans! 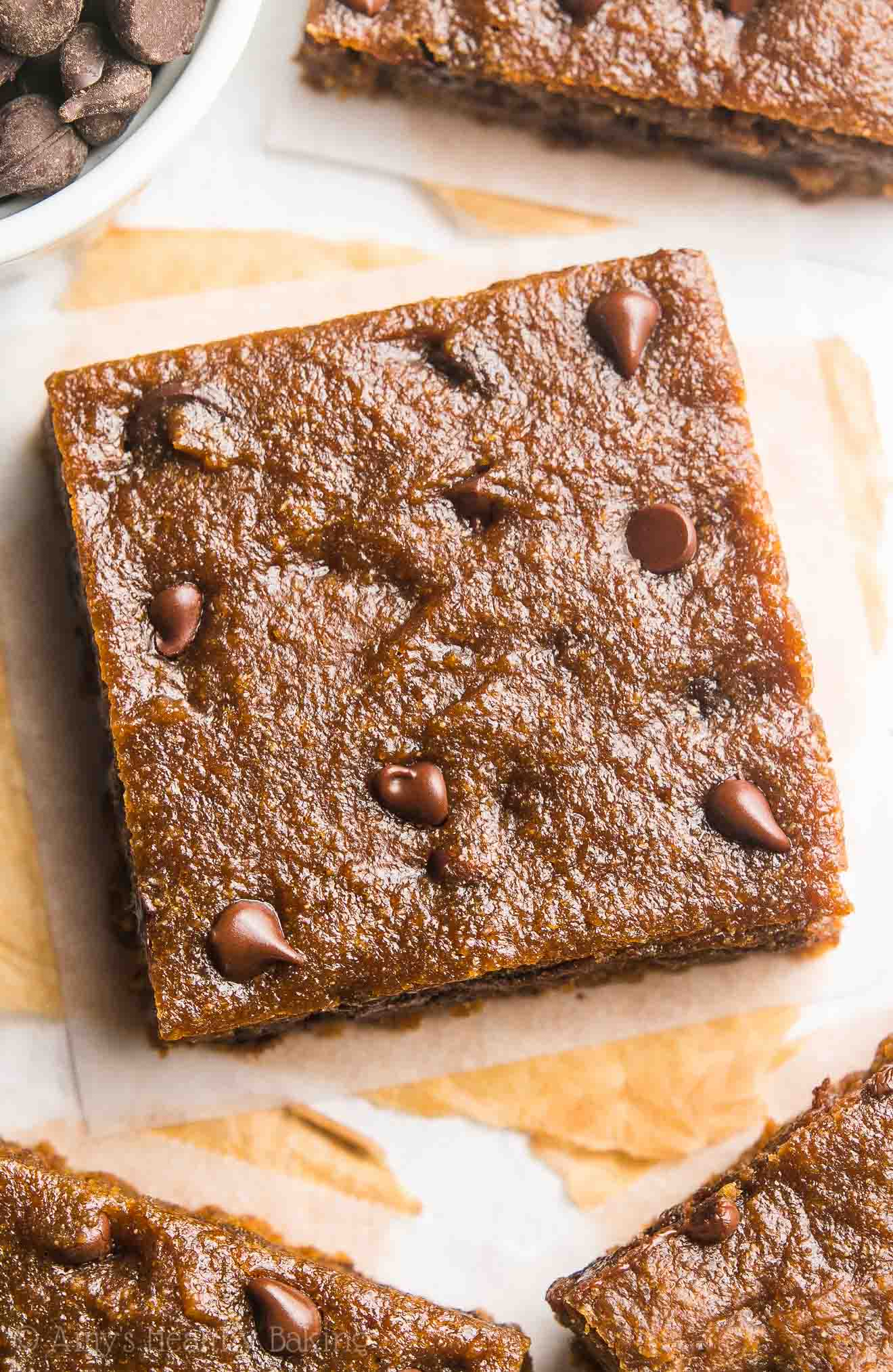 If only I had thought to create this recipe for Skinny Slow Cooker Chocolate Chip Cookie Bars back then… That would’ve been a lifesaver! The same sweet dough and rich melty chocolate, warm and gooey and oh-so-irresistible… Made guilt-free with no oven and no butter, refined flour or sugar! 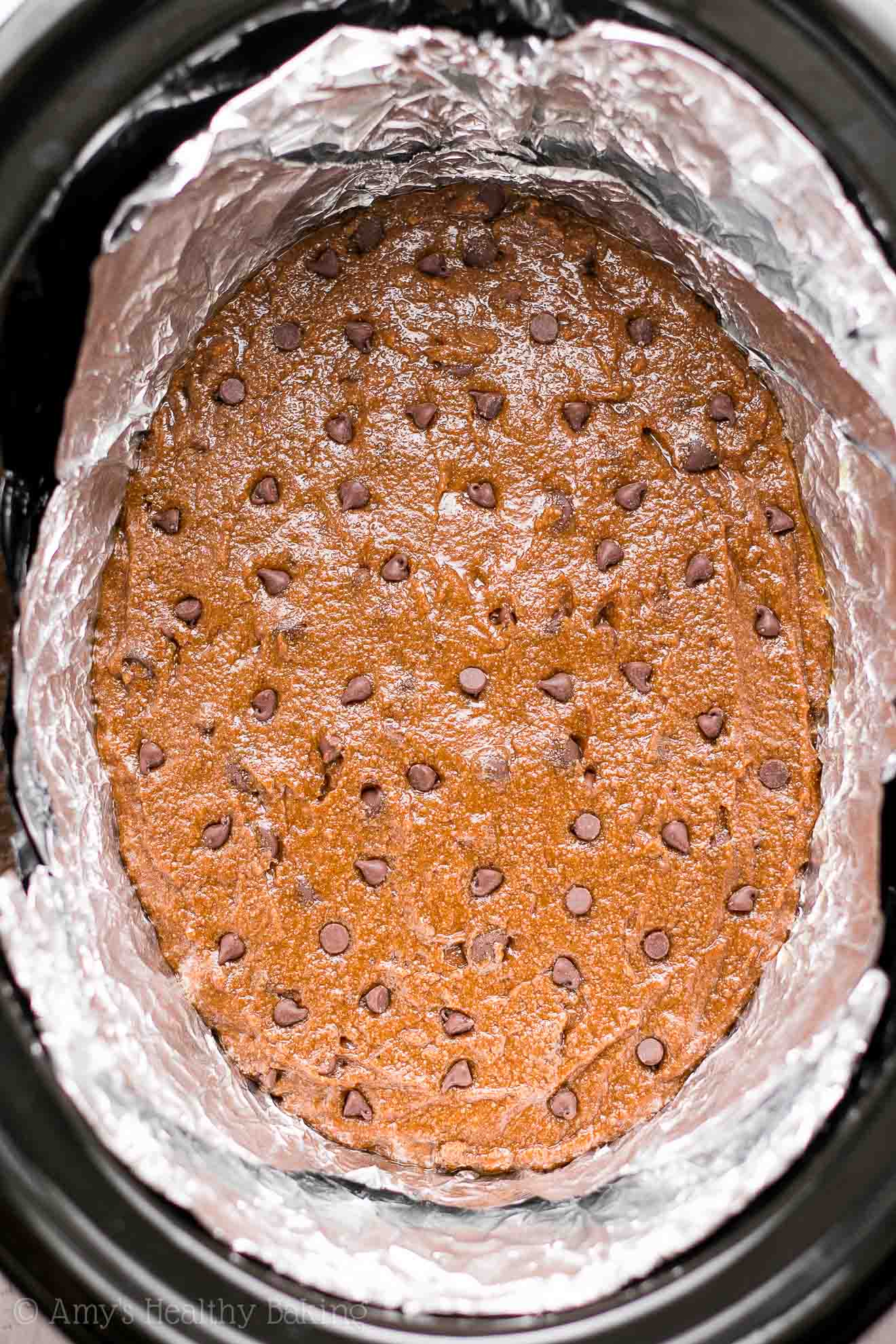 To start, you’ll need—you guessed it!—a slow cooker. This is the one that I own. It’s an oval-shaped five-quart model by Hamilton Beach. A six-quart slow cooker should work (just keep an eye on the bars since they’ll finish baking in less time!), but I highly recommend against using any other size.

To make clean-up a breeze, you’ll line the slow cooker with foil first, then lightly coat that with cooking spray. This little trick also makes it much easier to lift the cookie bars out of the slow cooker once they’ve cooled! 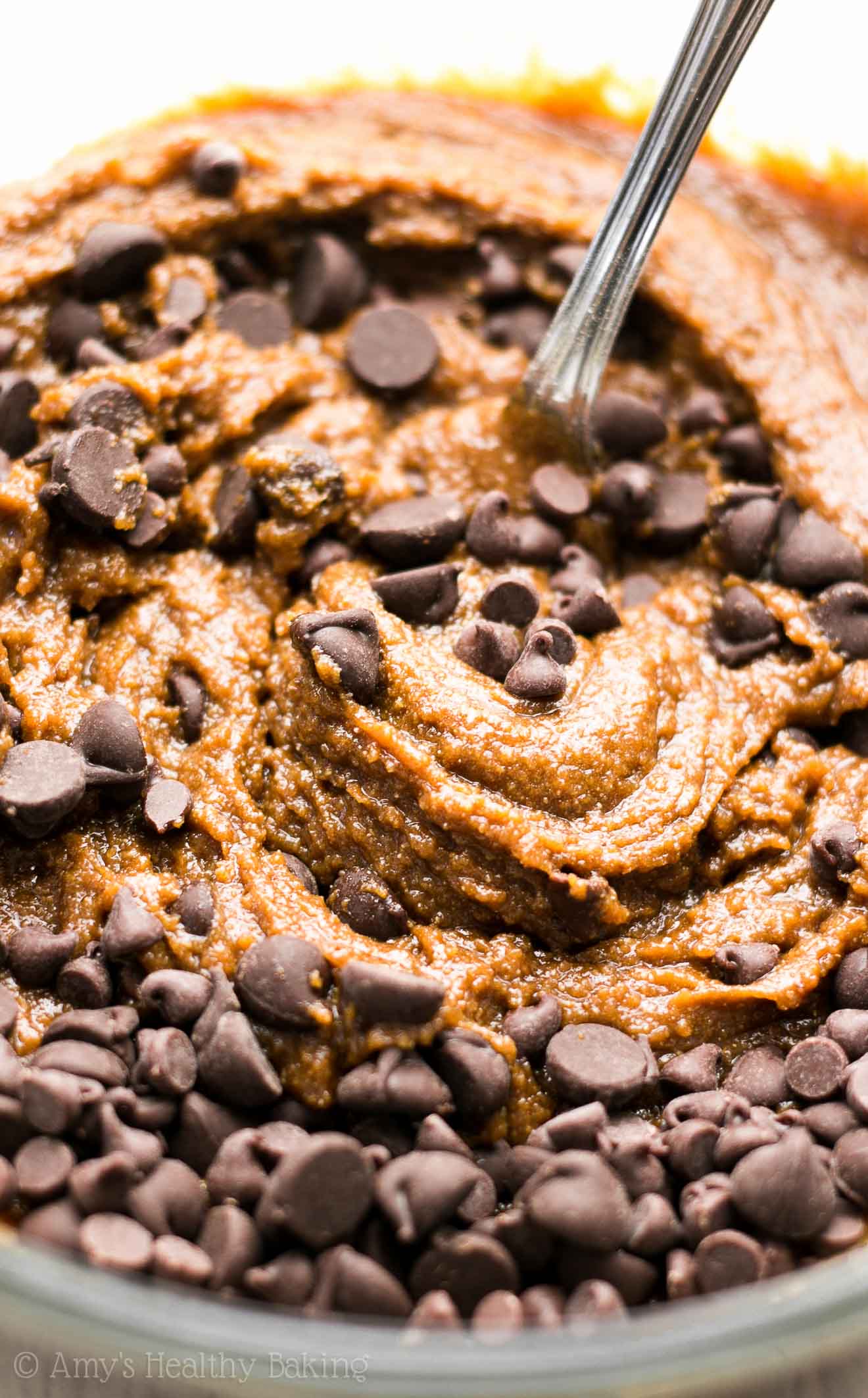 Note: Whole wheat pastry flour would be a great substitute, and I’ve included my preferred gluten-free flour in the Notes section as well.

To sweeten the cookies, you’ll mix in coconut sugar instead of refined sugar. Coconut sugar is exactly what it sounds like: sweetener that comes from coconuts. But no, it doesn’t actually taste like coconuts! Coconut sugar has a slight caramel-like flavor, very similar to the taste of brown sugar, but it pours like granulated sugar. Its deep brown color is the reason these bars look so dark, but that hint of a caramel taste makes them out-of-this-world amazing! 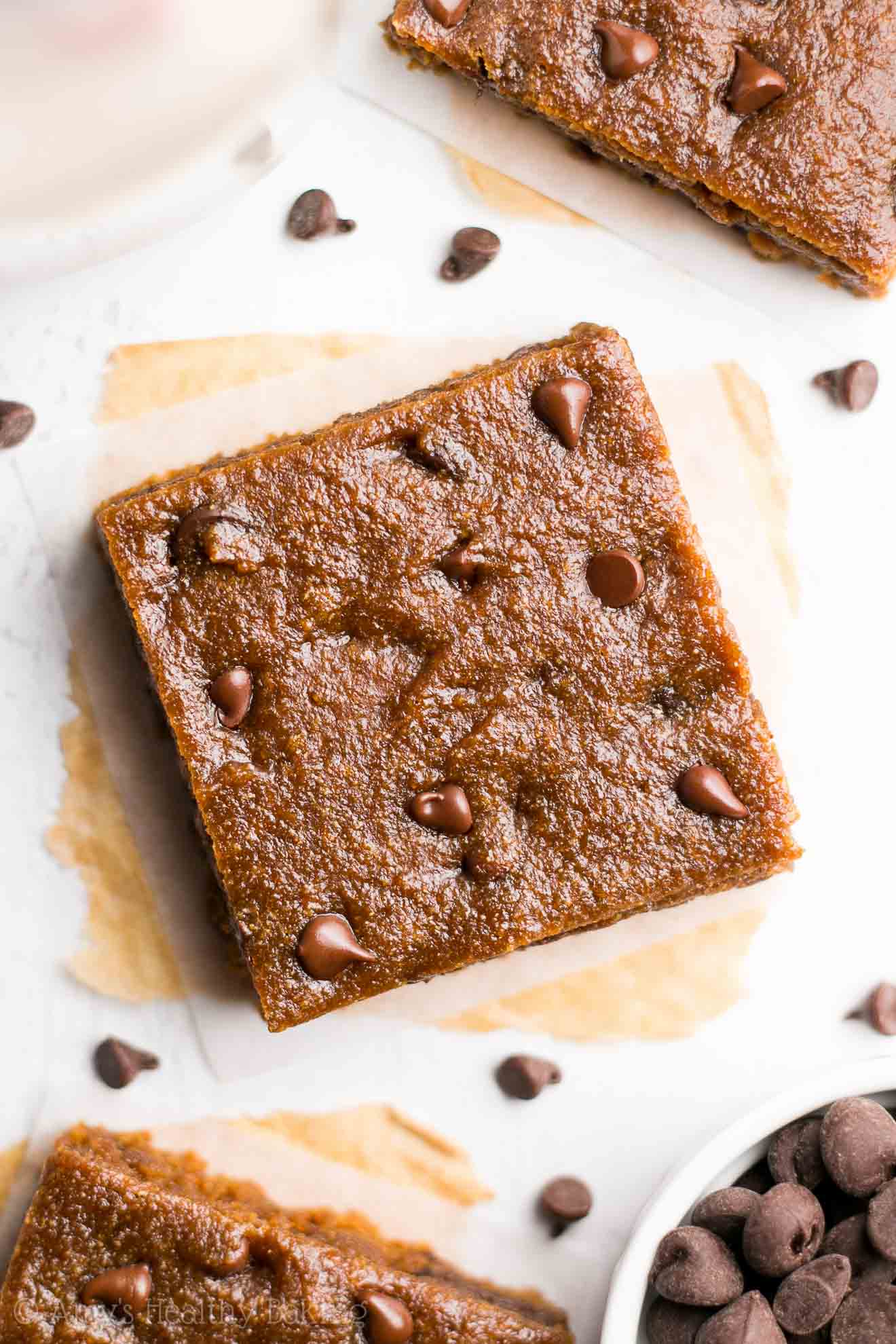 You’ll “bake” the cookie bars on the slow cooker’s low setting for a couple of hours. They’ll be done when the sides look set and firm but the center still looks slightly moist and gooey. You’ll let the bars cool completely to room temperature in the slow cooker, and the heat from the slow cooker will continue to cook the center during that time. When they’ve finished cooling and have set, they’ll have almost the same texture as fudgy brownies—absolutely irresistible! 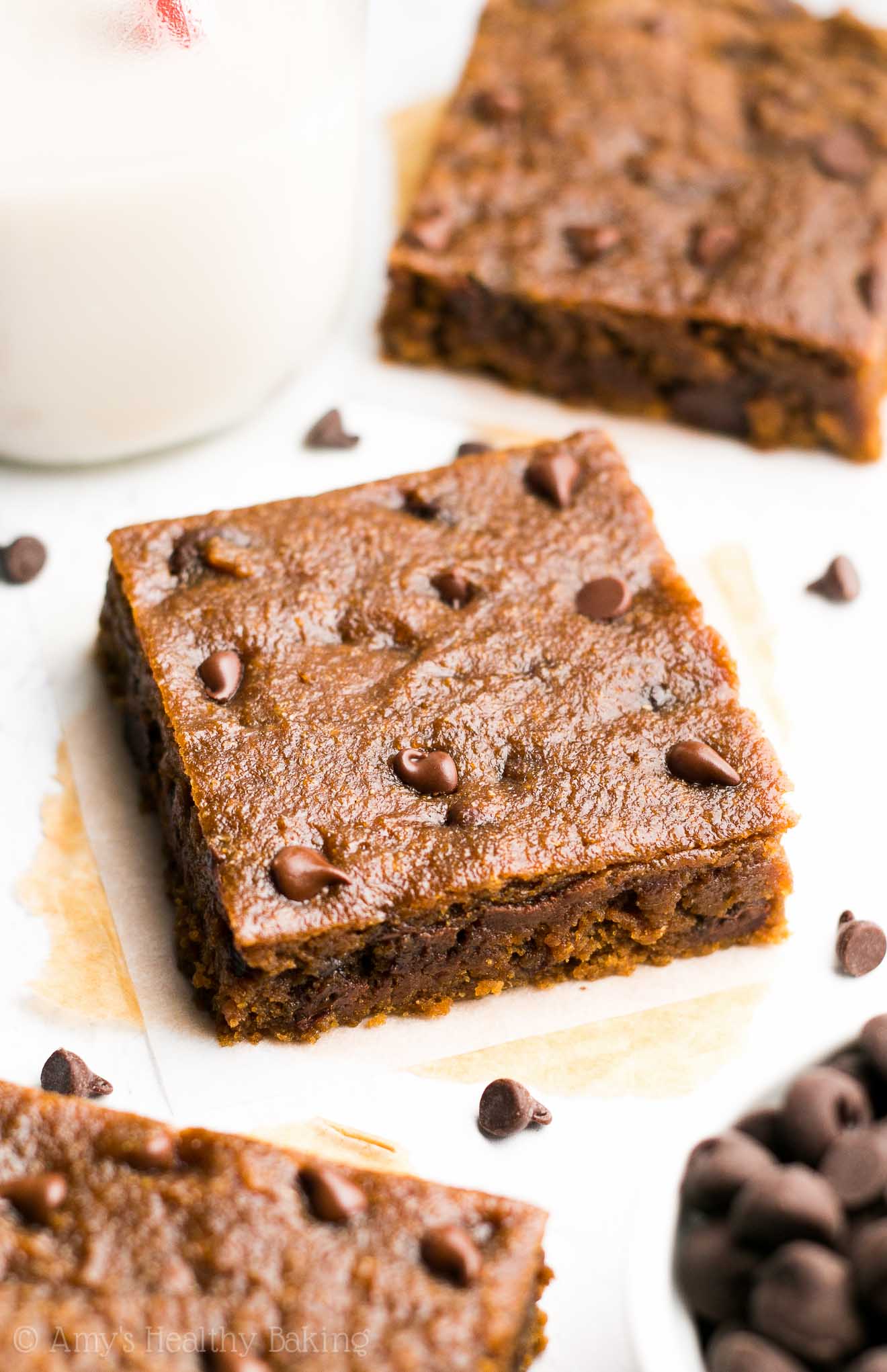 Who’s ready for dessert? And when you make your own, remember to snap a picture and share it on Instagram using #amyshealthybaking and tagging @amyshealthybaking IN the photo itself! (That guarantees that I’ll see the notification from you! ?) I’d love to see your cookie bars and feature them in my Sunday Spotlight series!

Click here to PIN the recipe and save it for later!
Yields: 18 bars
These chocolate chip cookie bars are a dream come true, especially when it’s too hot to turn on the oven! They’re full of rich chocolate, a hint of caramel-like flavor from the coconut sugar, and have almost the same fudgy texture as brownies. They’ll keep for at least 5 days if stored in an airtight container. (To make them last longer, place that container in the refrigerator!)
Notes: This is the 5-quart oval-shaped slow cooker that I used. A 6-quart slow cooker may be used instead, but the cookie bars will be thinner and will most likely finish cooking in less time. Do not use any other size slow cooker.

If you prefer to use 2 full eggs, decrease the butter or coconut oil to 2 ½ tablespoons (35g).

If you prefer to bake the cookies in the oven, use this recipe of mine (it’s very similar!), and press the cookie dough into a 13x9” rectangular cake pan coated with cooking spray. Bake at 350°F. Although I’m not entirely sure how long they’ll take to bake, the cookie bars will be done when the sides look fully cooked through and the center looks mostly set.

The Healthier Chocolate Treats cookbook is perfect for any and all chocolate lovers. Whether you enjoy chocolate occasionally or every single day (that’d be me!), there are plenty of goodies inside for you! Healthier Chocolate Treats contains 50+ brand new healthier recipes. These recipes have never been seen before or appeared on my blog. You won’t find them anywhere else! And yes—every single one contains some form of chocolate. Whether you prefer milk, dark or white, there are lots of treats inside for you!     What Inspired You to Write Healthier Chocolate Treats? I have always loved chocolate. Every Halloween throughout my childhood, I inverted the entire contents of my bright … END_OF_DOCUMENT_TOKEN_TO_BE_REPLACED