An easy recipe for extra fudgy brownies with very few leftovers to tempt you! Deliciously rich, even with no butter, refined flour or sugar & only 67 calories!
Click here to PIN the recipe and save it for later! 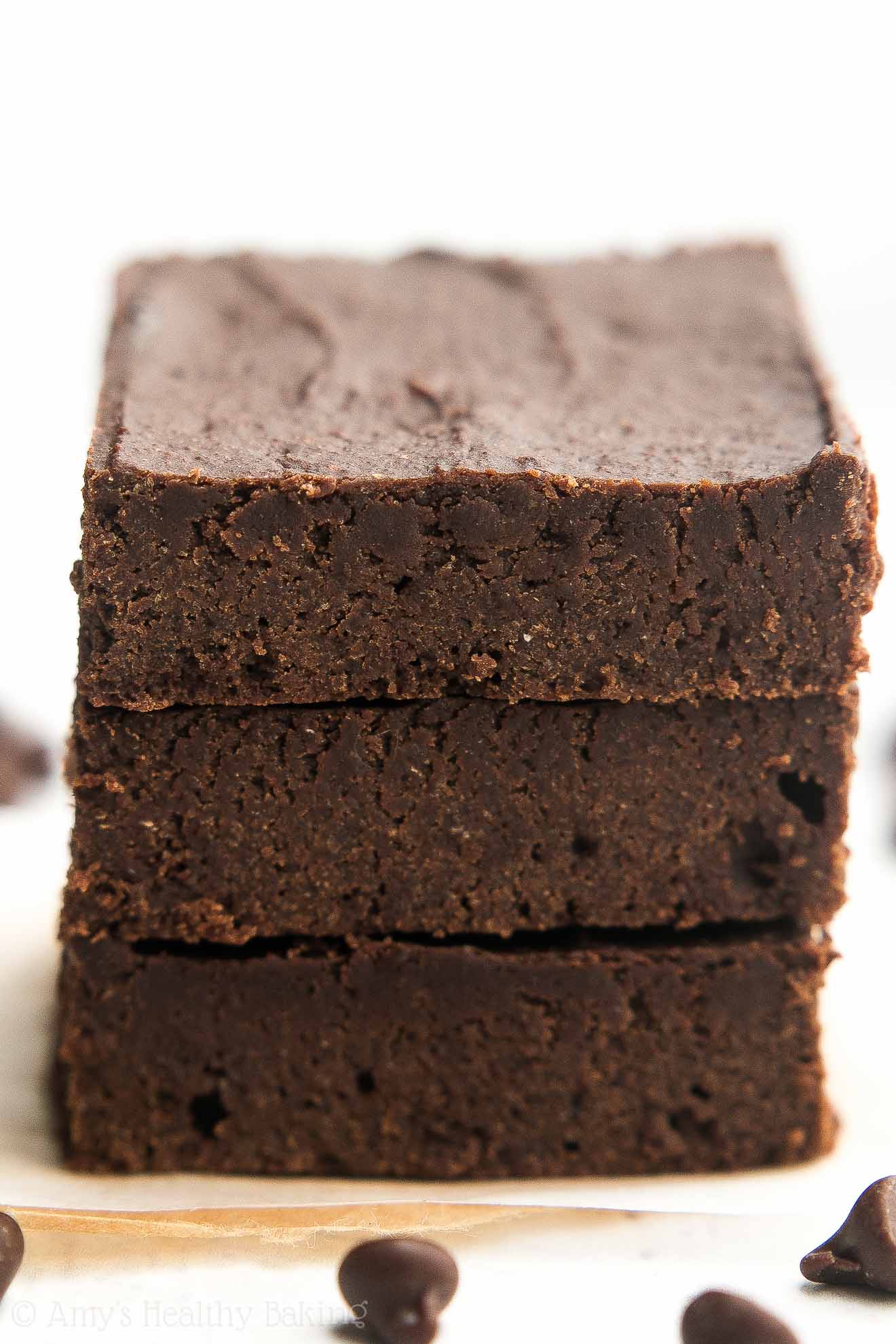 In high school since my birthday fell the day after one of my best friend’s, we always celebrated together at TGI Fridays, a favorite restaurant of ours. We tried to arrive before the dinner crowd, and after the hostess seated us at a cozy booth, we each handed the other person a gift bag with tissue paper poking out of the top before opening the menu.

As creatures of habit, we both ordered the same thing on every visit: a light salad with chicken for protein, water for me, and iced tea for her. While waiting for our entrées to appear, we opened our birthday presents. Since she put together scrapbooks in her spare time (and still does!), I often gave her fun stickers or pretty patterned paper for her to use. 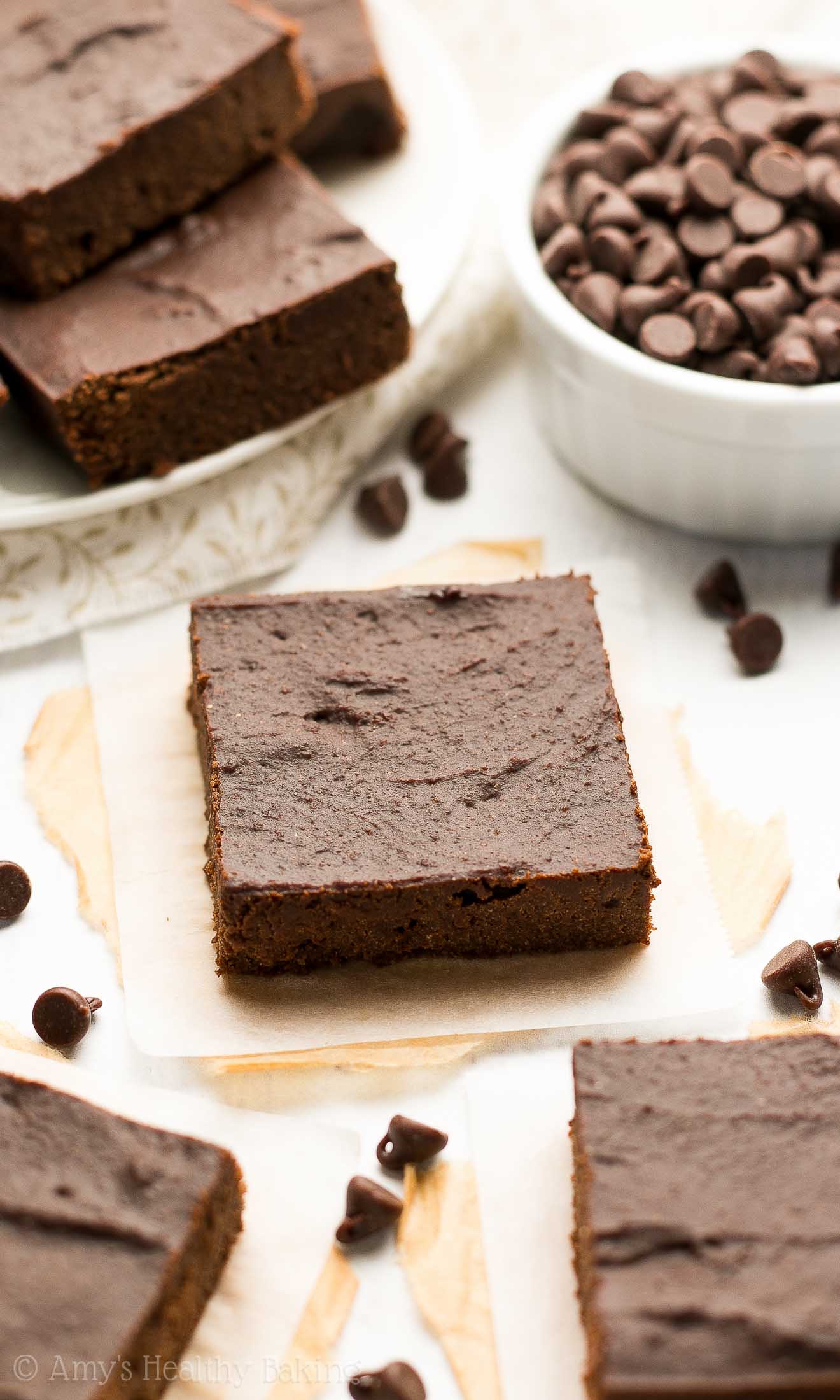 Although we both enjoyed our entrées, we always asked for a to-go box to take home at least half because… We mainly went for dessert! Specifically the Brownie Obsession: a warm, thick, extra fudgy brownie topped with a big scoop of vanilla ice cream, caramel and chocolate sauces, and chopped pecans. (But we requested extra chocolate sauce and no pecans on ours!)

We slowly savored every bite of that decadent dessert, scraping up the last lingering brownie crumbs and chocolate drips with our spoons before the waiter took the plate back to the kitchen. As a chocoholic with a huge sweet tooth, I never wanted to leave a single morsel behind… But that meant I often walked out with the waistband of my jeans feeling a little too tight! 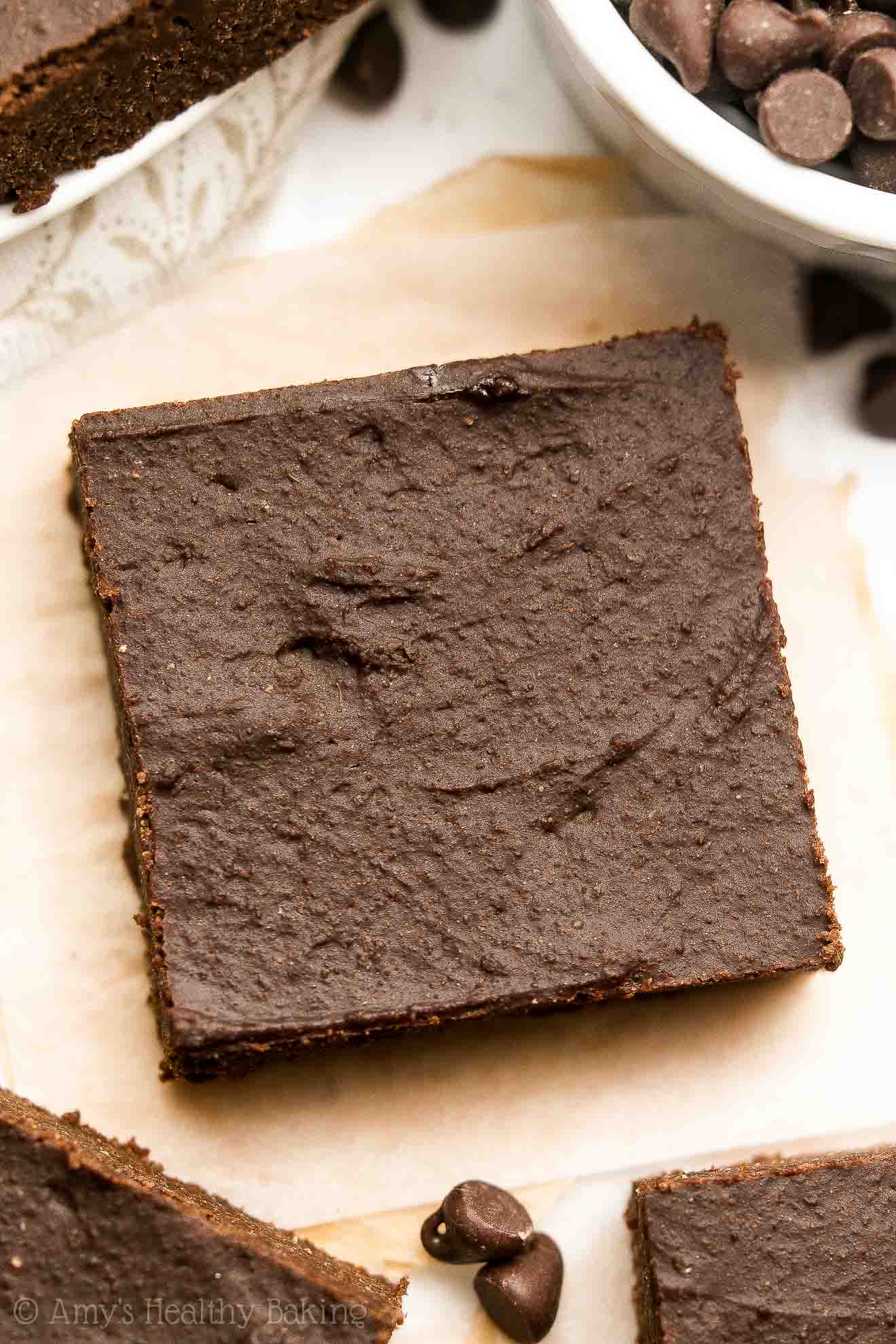 Which is why I ♡ this recipe for Healthy Small Batch Fudgy Dark Chocolate Brownies! With so few servings, it’s nearly impossible to over-indulge, even for a brownie-obsessed girl like me. Plus they contain no butter, refined flour or sugar and only 67 calories!

Even better? If you devoured the entire pan in one sitting, and topped it with ice cream and caramel and chocolate sauce… You’d still eat fewer calories than if you had one of those Brownie Obsessions from the restaurant! ??

It’s extremely important to measure the flour and cocoa powder correctly, using this method or a kitchen scale. Too much of either will dry out the batter and make your brownies cakey, and too much cocoa powder will make them taste bitter, rather than perfectly rich and decadent. This is the kitchen scale I own, and I highly recommend it! I use it to make every recipe I share with you because it ensures my treats turn out with the perfect taste and texture every time. 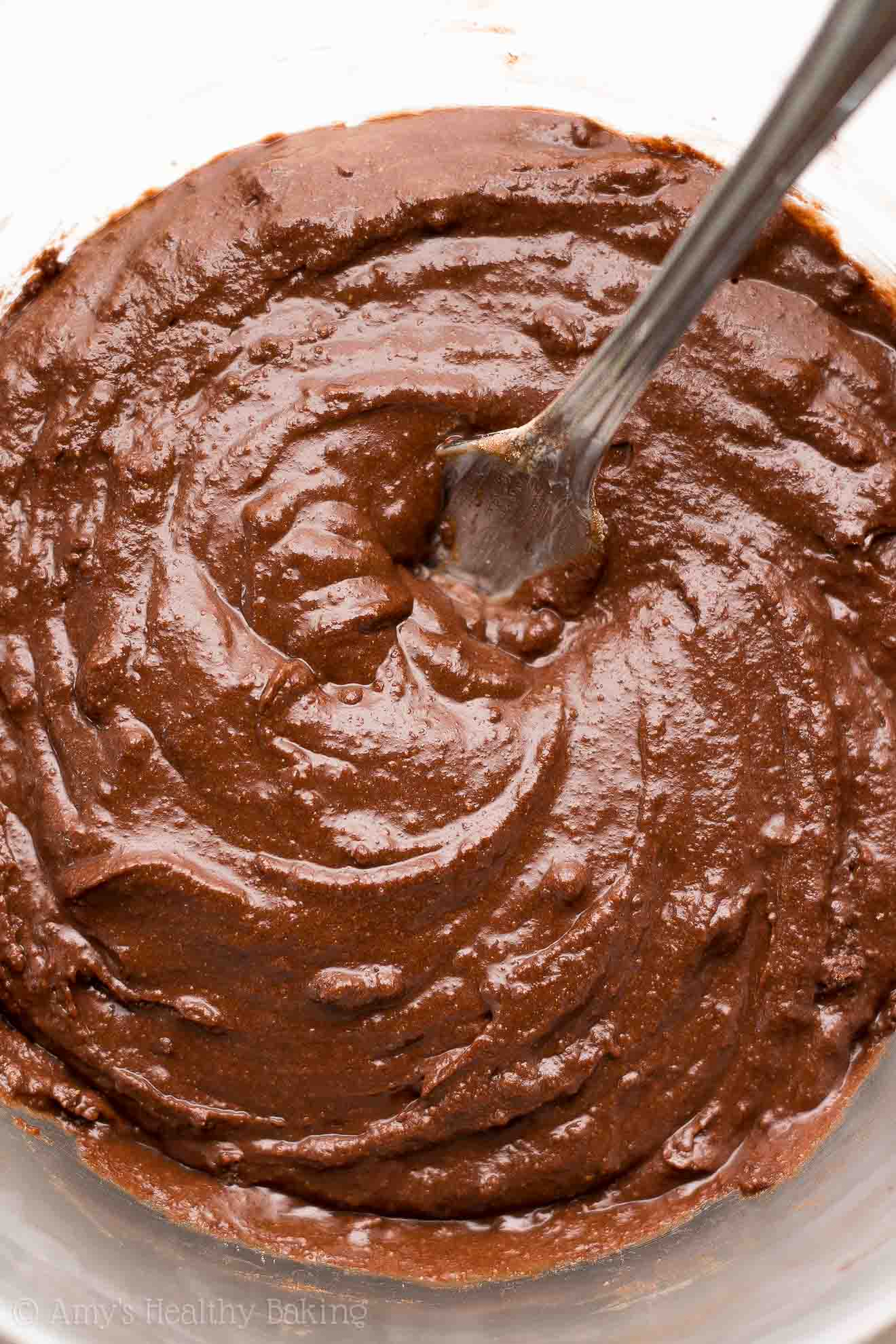 Instead of refined sugar, you’ll sweeten these brownies with pure maple syrup, like this! Make sure you buy the real kind! Skip the pancake syrup and sugar-free syrup because those contain corn syrup or artificial ingredients, which we’re avoiding in this healthy recipe. The only ingredient on the label should be “maple syrup,” and it generally comes in thin glass bottles or squat plastic jugs. 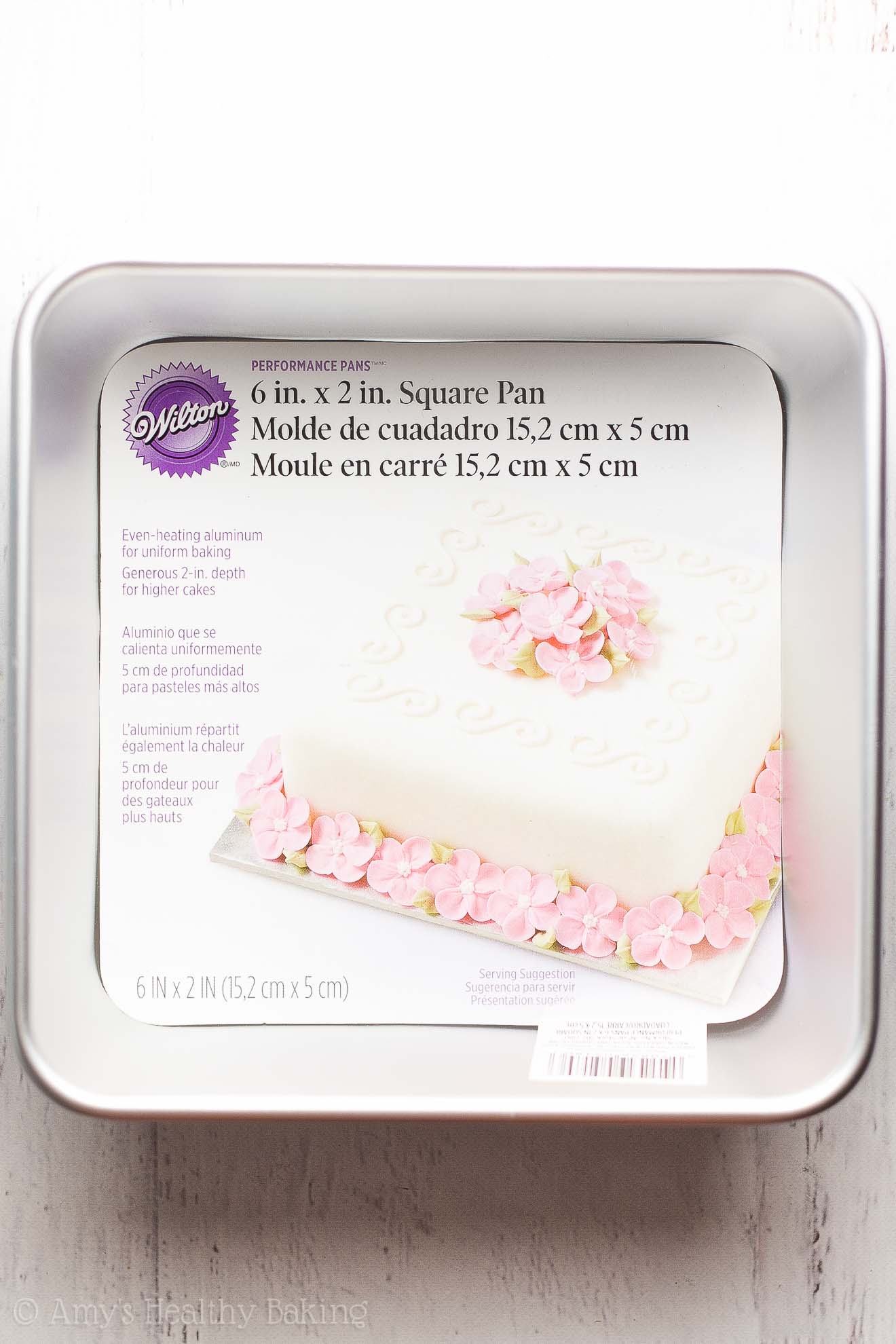 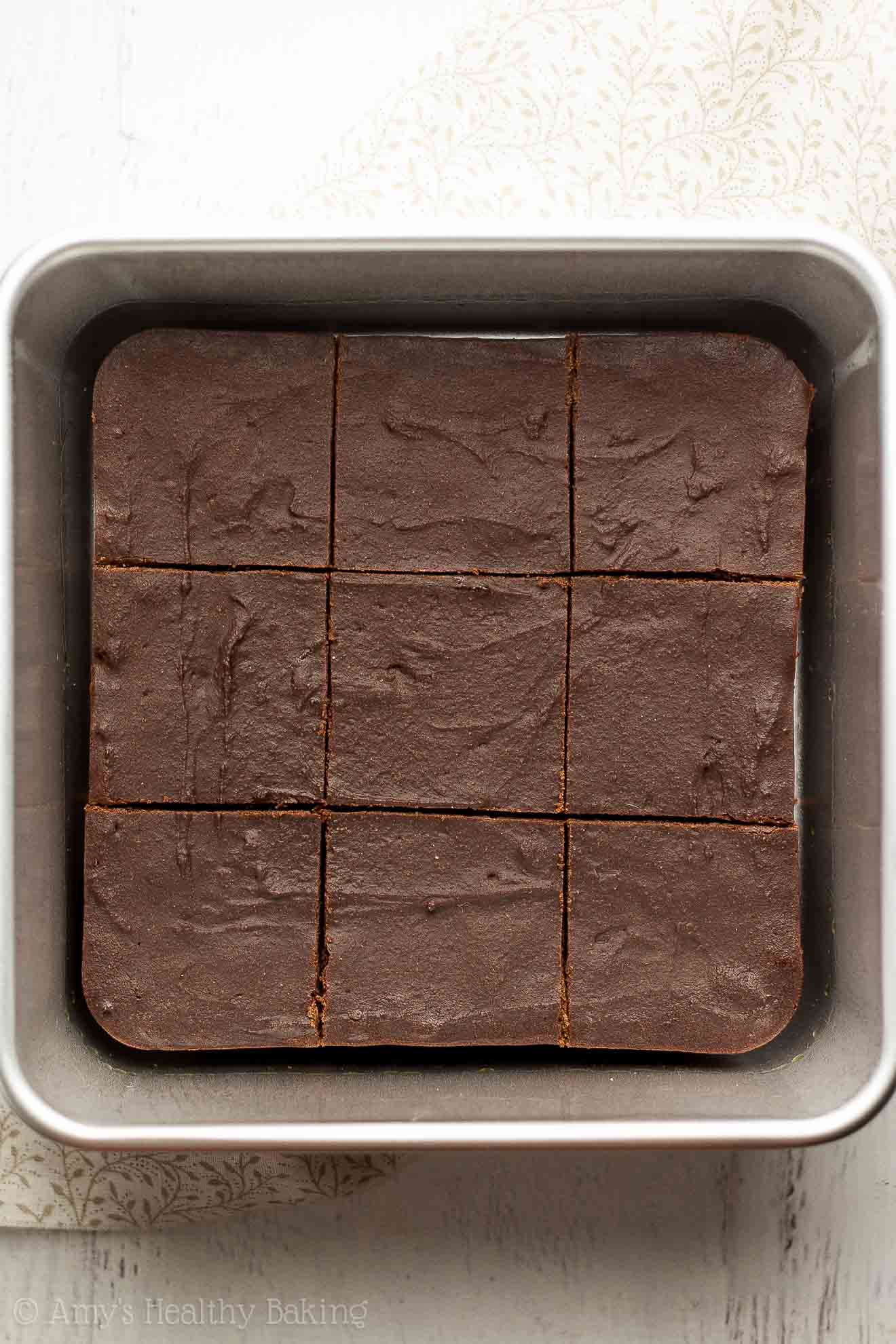 Because you’re making so little batter, you’ll need a small 6”-square pan to bake it in. I found these at Walmart on the wedding aisle, and they last for ages and work perfectly! Isn’t that size adorable?? In a pinch, you can use a 8×4” loaf pan or two mini loaf pans. 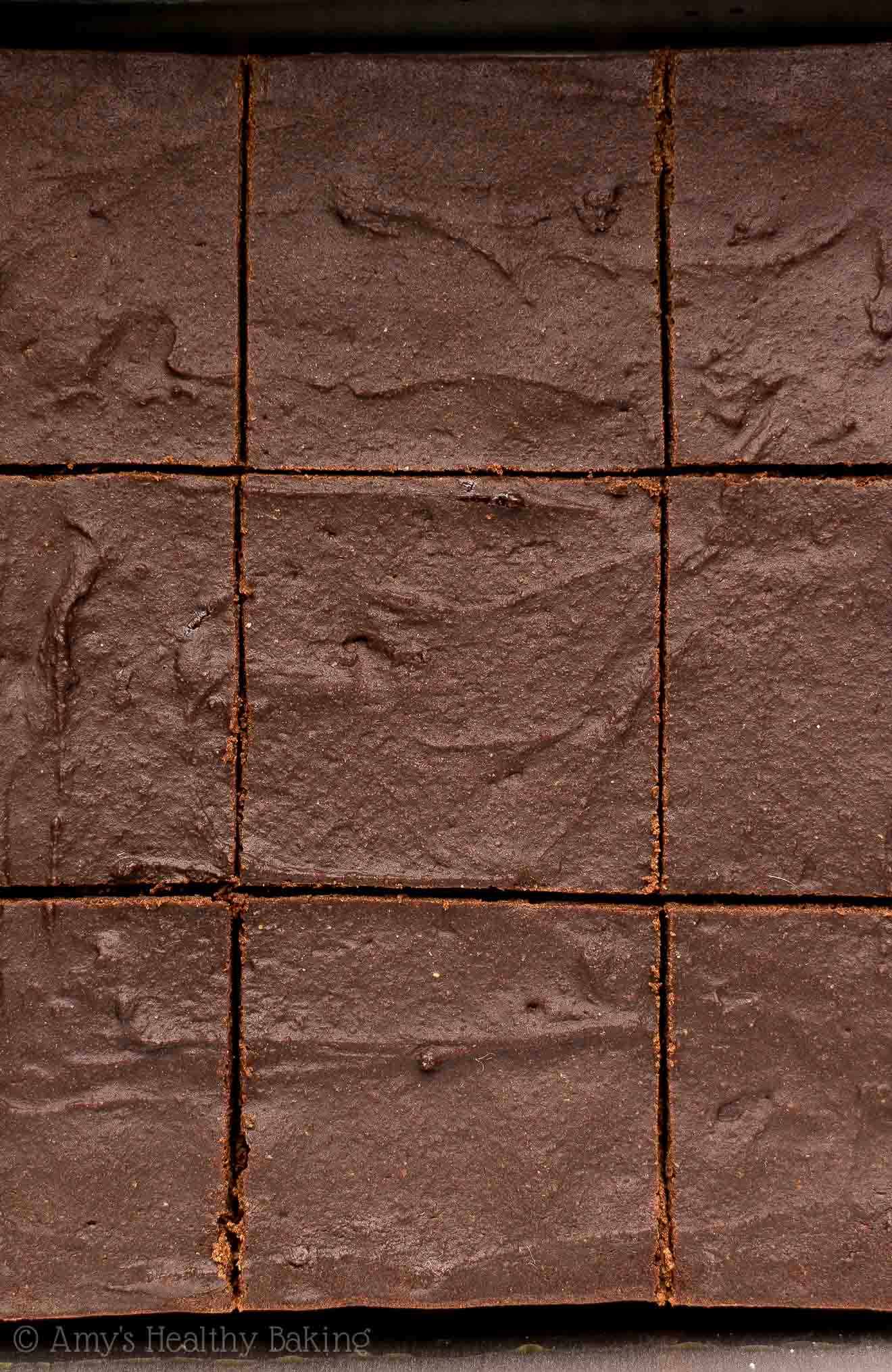 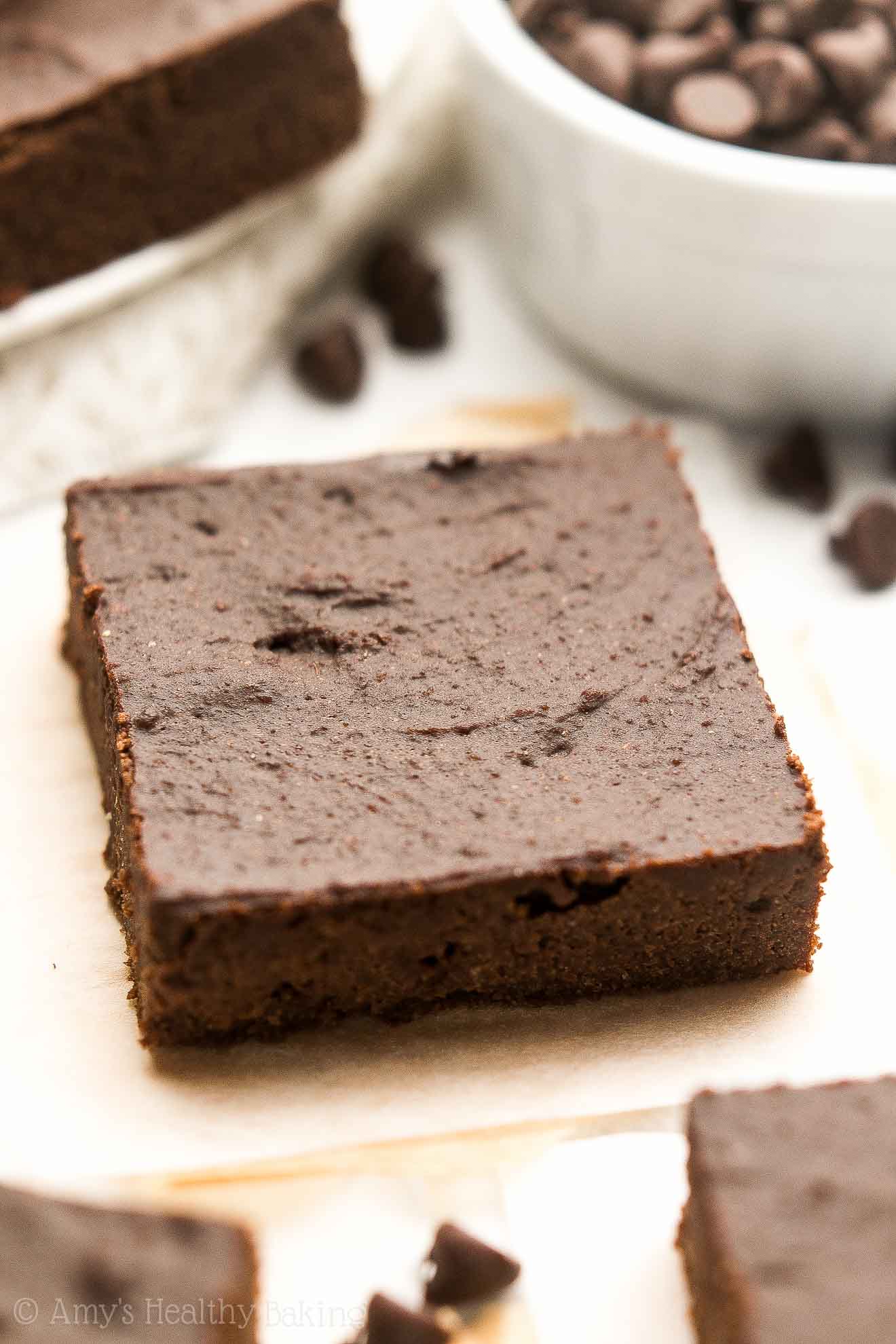 So, my fellow brownie lover, how perfect does that look?? ? And when you make your own, remember to snap a picture and share it on Instagram using #amyshealthybaking and tagging @amyshealthybaking IN the photo itself! (That guarantees I’ll see your picture! ?) I’d love to see your brownies and feature them in my Sunday Spotlight series!

Click here to PIN the recipe and save it for later!
Yields: 9 brownies
These fudgy brownies are perfect for any chocoholic! They taste very rich, similar to 72% dark chocolate. Leftovers will keep for at least 5 days if stored in an airtight container in the refrigerator.
Notes: This is the 6”-square baking pan that I use. I found mine at Walmart on their wedding aisle! If you can’t find one (and they’re really handy to have!), then substitute an 8x4” loaf pan –OR– divide the batter between two mini loaf pans (they should be 5¾x3” in size).

I don’t recommend using Dutched or special dark cocoa powder. The brownies already taste very rich and dark chocolaty without it! Be very careful when measuring the cocoa powder, using this method or a kitchen scale. (That's the one I own and love!) Too much cocoa powder will make your brownies dry and taste bitter.

Want to make a regular-sized pan of brownies instead? Then follow this recipe of mine!

The Healthier Chocolate Treats cookbook is perfect for any and all chocolate lovers. Whether you enjoy chocolate occasionally or every single day (that’d be me!), there are plenty of goodies inside for you! Healthier Chocolate Treats contains 50+ brand new healthier recipes. These recipes have never been seen before or appeared on my blog. You won’t find them anywhere else! And yes—every single one contains some form of chocolate. Whether you prefer milk, dark or white, there are lots of treats inside for you!     What Inspired You to Write Healthier Chocolate Treats? I have always loved chocolate. Every Halloween throughout my childhood, I inverted the entire contents of my bright … END_OF_DOCUMENT_TOKEN_TO_BE_REPLACED