A guilt-free recipe for cinnamon rolls that taste like the iconic autumn drink! Tender pumpkin dough flavored with a kiss of coffee & filled with gooey cinnamon spirals. Only 109 calories!
Click here to PIN the recipe and save it for later! 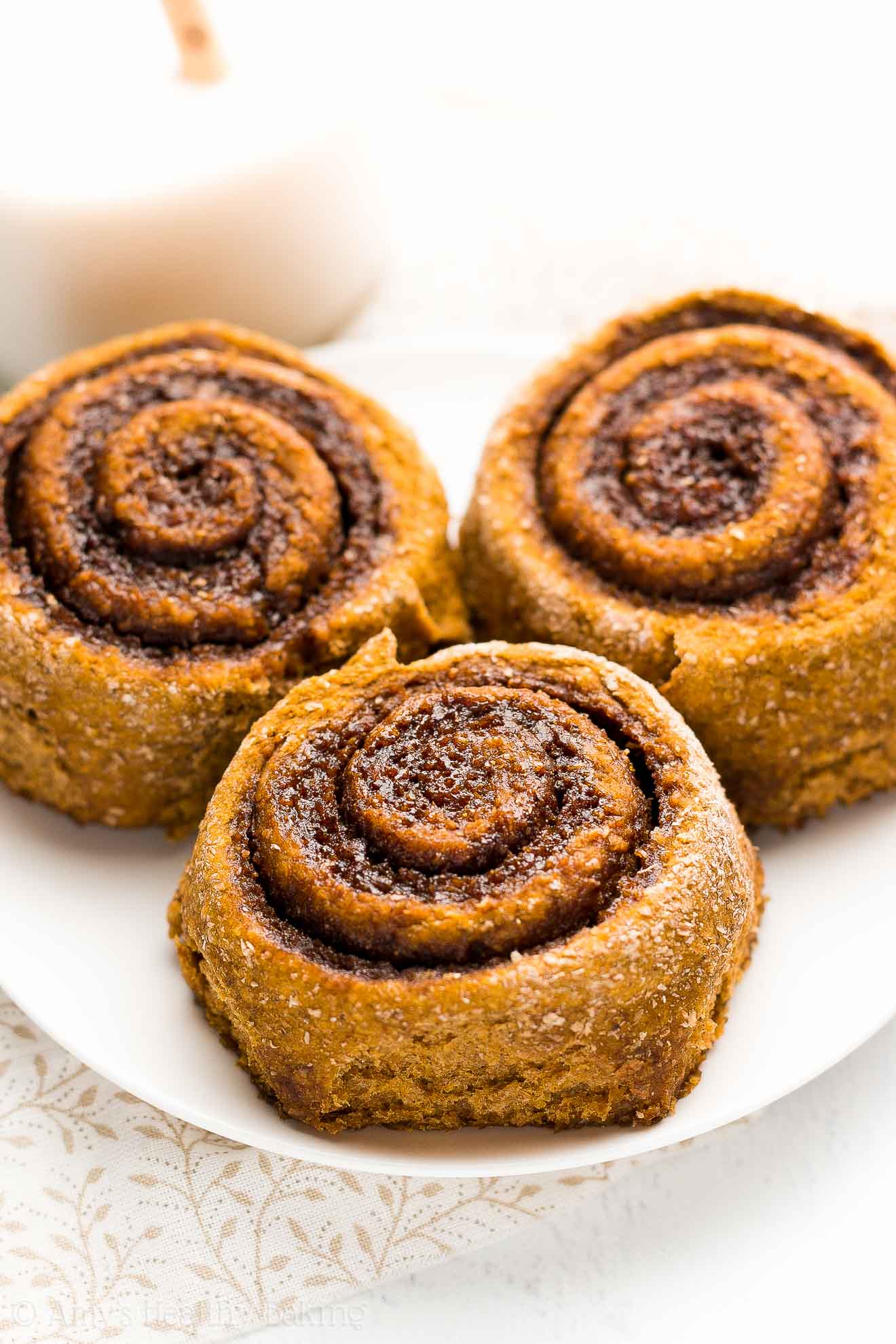 I’m so excited to team up with Red Star Yeast® to bring you today’s recipe! I’m the biggest fan of their yeast products. They’re the only yeast products I use in my baking!

Shortly after I started food blogging full time, I came across Sally’s blog the same week she posted a recipe for fluffy breakfast sweet rolls. Like any overly excited fan, I tweeted about how much I wanted to devour her gorgeous treats made with Red Star Yeast. 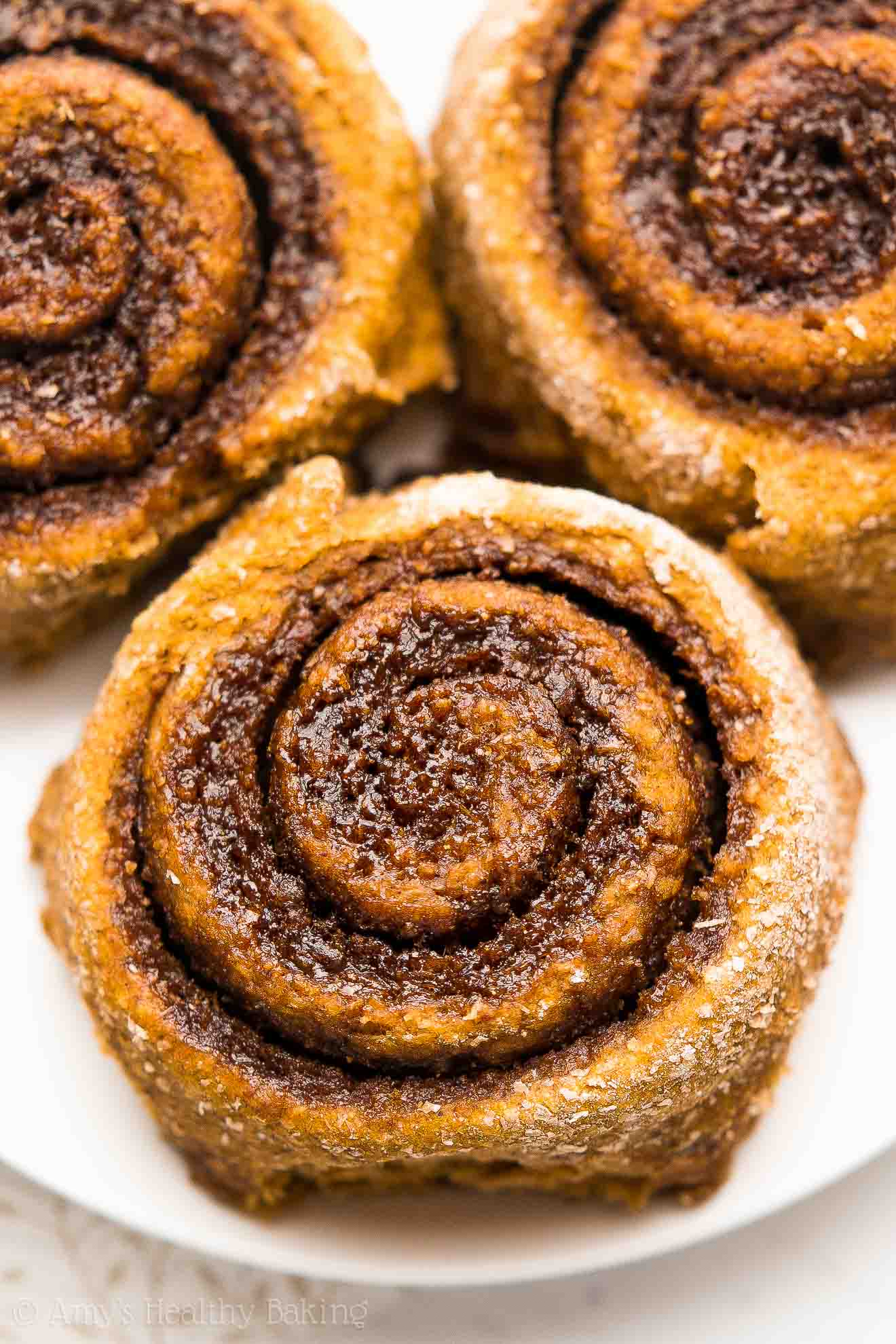 The next day, I received a tweet in response… Not from Sally, but from Red Star Yeast! They kindly offered to send me product samples, and I nearly fell out of my office chair in sheer shock. I felt like a mini celebrity!

With shaking fingers, I tweeted back my address, and the following week, the mailman delivered a special package with a variety of yeast packets tucked inside. I immediately cancelled all of my plans for the day and dashed into the kitchen instead to bake a batch of my favorite cinnamon rolls. 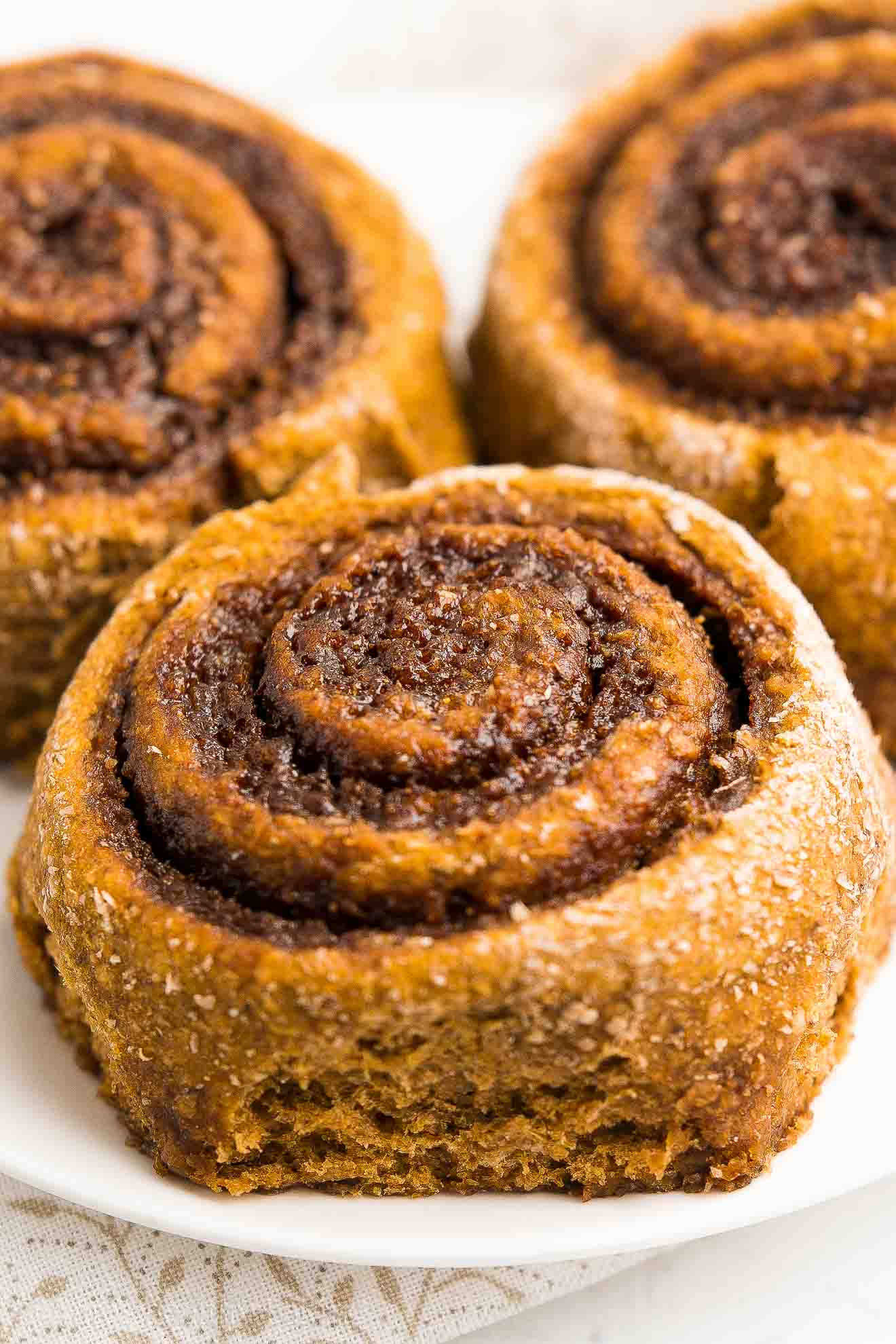 A couple hours later, I gasped as I peeked underneath the towel after letting the rolls rise in the pan. They were nearly double their usual size—and all I had changed was the yeast I used! Once they finished baking and cooled for a few minutes, just long enough that I wouldn’t burn my tongue on their ooey gooey cinnamon spirals, I tried my first bite.

Since then, I’ve kept a constant stash of Red Star Yeast products in my kitchen. The individual packets, glass jars… You name it. I’m obsessed and never bake with anything else! 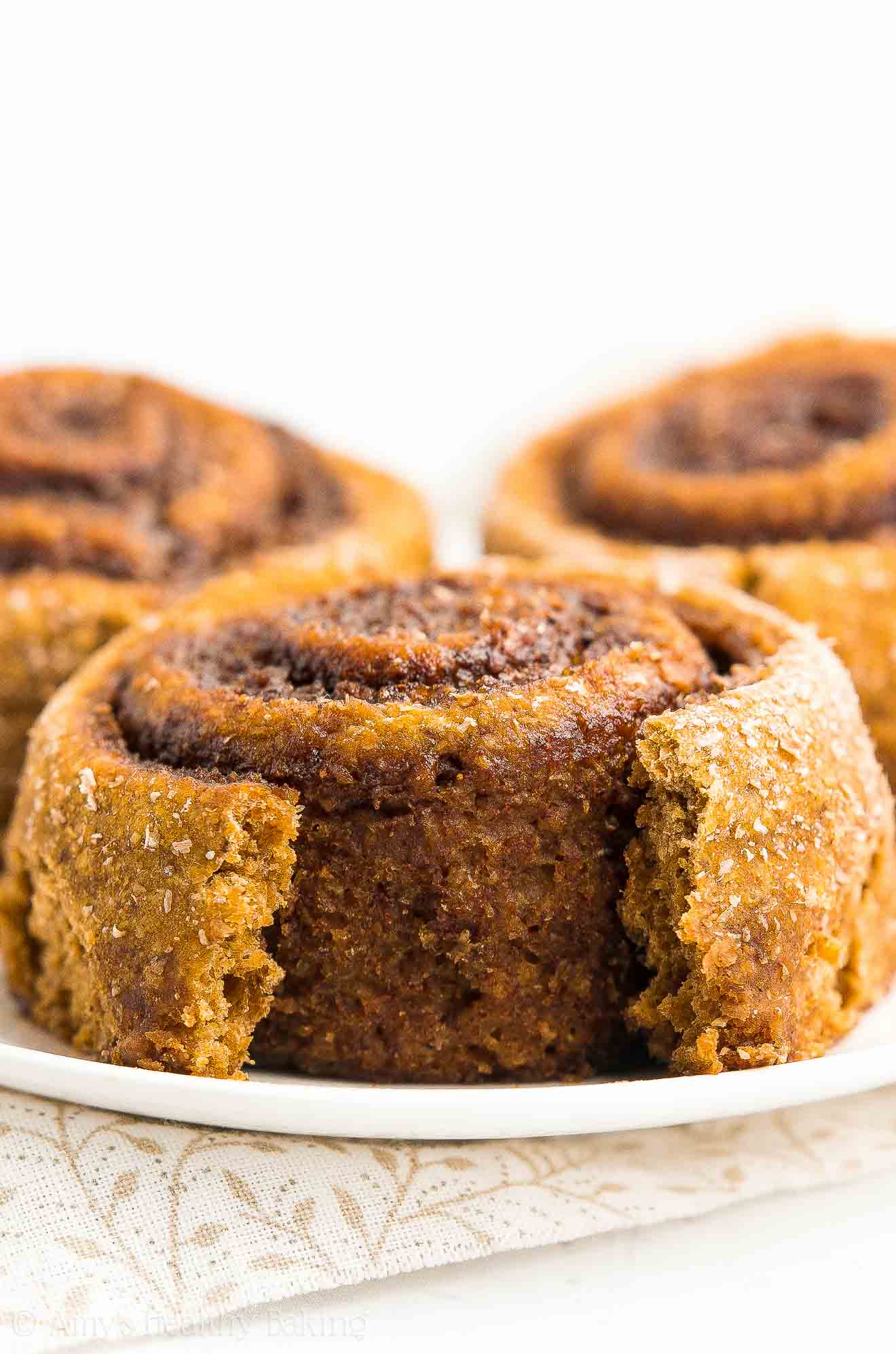 With chilly fall weather just around the corner, I decided to whip up a batch of these Healthy Pumpkin Spice Latte Cinnamon Rolls to celebrate! (Pumpkin season is my favorite time of the “food” year!) They taste just like the iconic autumn drink, a warm hug full of festive pumpkin and earthy coffee and cozy spices… The perfect way to start your day!

So let’s talk about how to make them! 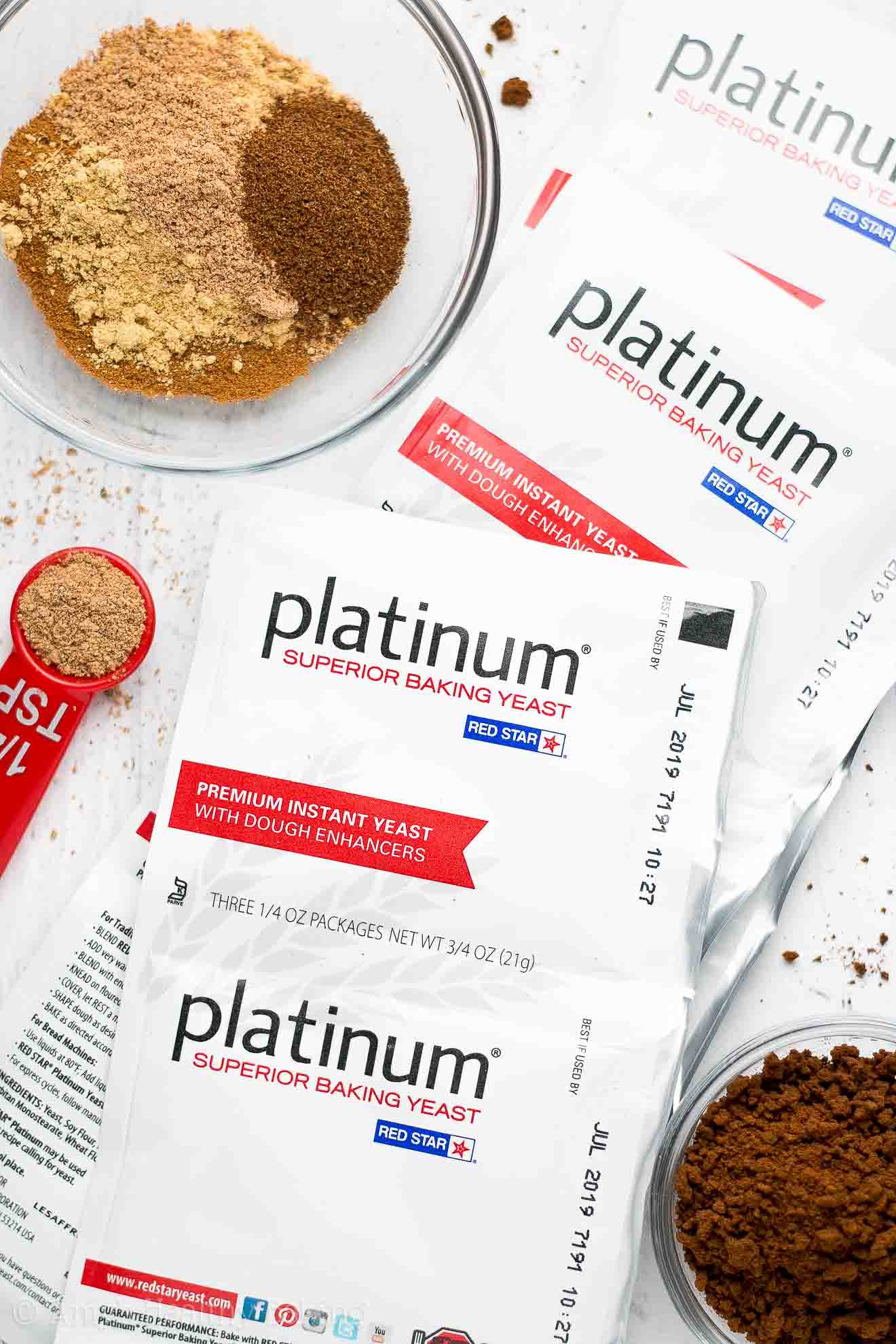 You’ll start by mixing together warm milk, coconut sugar, salt, a tiny bit of melted butter, and Platinum® Red Star Yeast. It’s a special yeast with dough enhancers. I feel like a baking rock star every time I work with RSY’s Platinum yeast because (a) it’s so easy to use and (b) it makes my cinnamon rolls rise as high and look as professional as any bakery’s! Totally awesome feeling.

Even better, Red Star Yeast is offering you an exclusive coupon here! Buy one, get one FREE! ??

Next comes instant coffee (like this!) and pumpkin purée (not pumpkin pie mix!) for that iconic pumpkin spice latte flavor. Don’t use regular coffee grounds or brewed coffee! The former will make your dough taste gritty, while the latter will add too much liquid… Which means you’ll need a lot more flour, and you won’t taste the pumpkin. Boo! 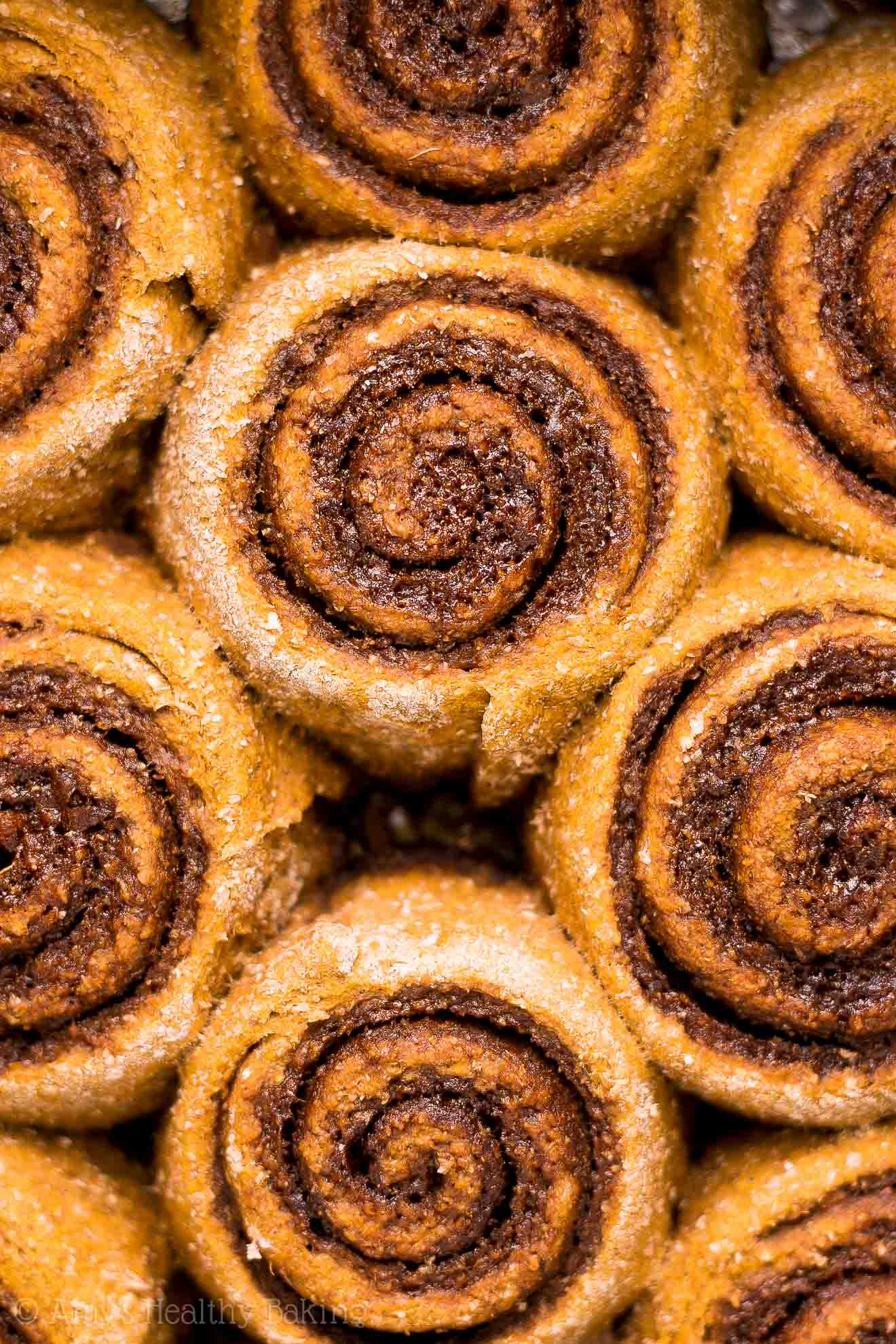 And of course, we can’t forget the pumpkin spice! I made my own from cinnamon, ginger, nutmeg, and cloves. My spice cabinet is already bursting at the seams and can’t hold another bottle, so I skipped the store-bought blends!

To keep these cinnamon rolls on the healthy side, you’ll use whole wheat flour. Not all brands work equally well. Some rise higher than others, and from my personal experience, this is the one I’ve found works the best with Red Star Yeast in my recipes! 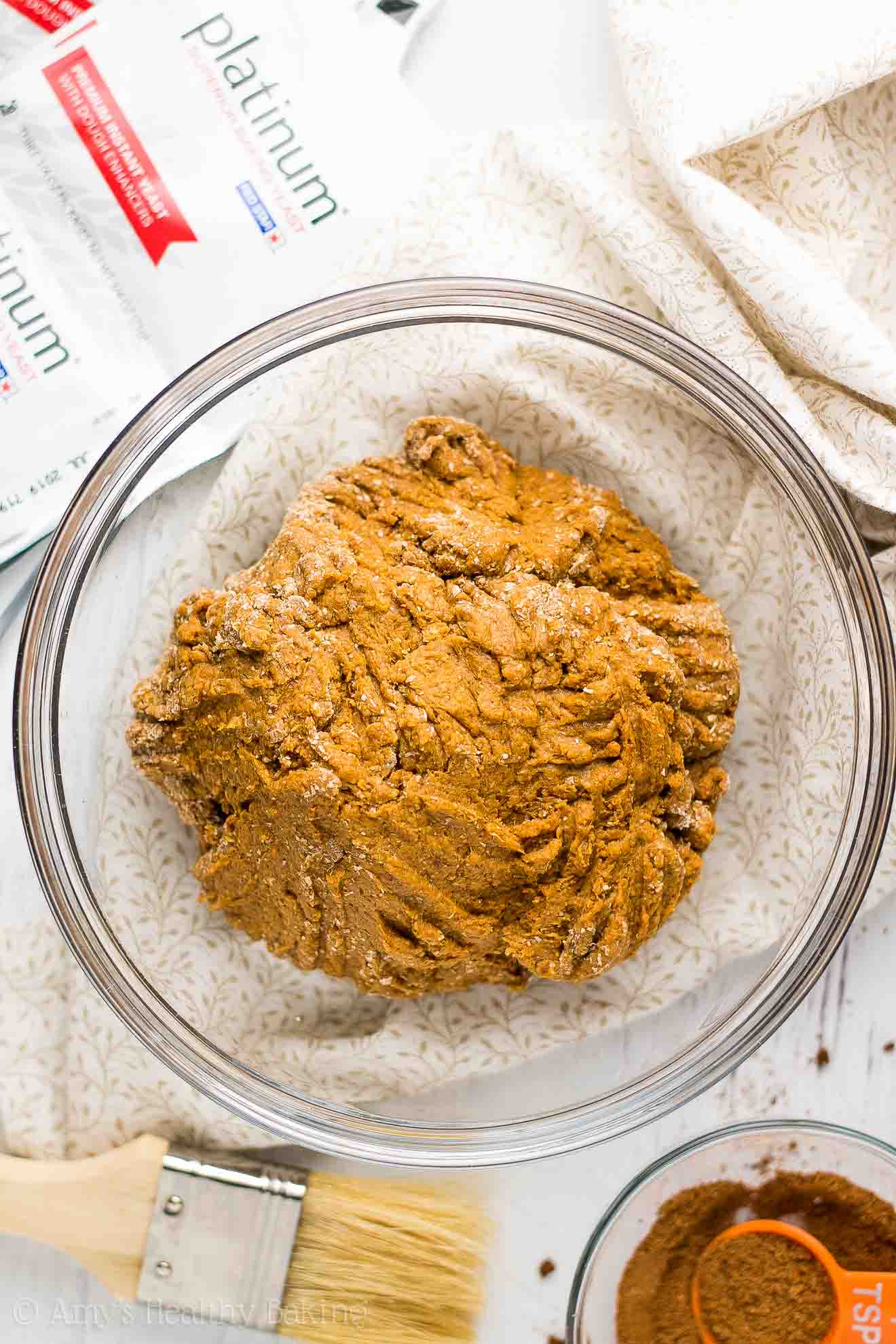 Now it’s time to knead the dough! I always do this by hand. Kneading dough is my most favorite part of baking… It’s so soothing and therapeutic, especially when it results in supremely tender cinnamon rolls at the end!

Just gently press your well-floured palm into the dough, fold in half, and continue to repeat those motions. Add more flour as needed—you don’t want it sticking to your hands! Once the dough bounces back when you lightly press your finger into it, you’re ready to prepare the filling. (Watch my video here for a visual!)

This is where the magic of gooey cinnamon filling spirals begins… You’ll combine coconut sugar (like this) and pumpkin spice (again, I used homemade!). Super simple! Then roll out the dough into a large rectangle, brush with an itty bitty amount of melted butter, and sprinkle that filling evenly over the top.

Once you’ve rolled up the dough, it’s time for my secret trick to cutting perfect cinnamon rolls! Ready?? You use… Dental floss! Crazy, isn’t it? Watch my video here on how to do it! 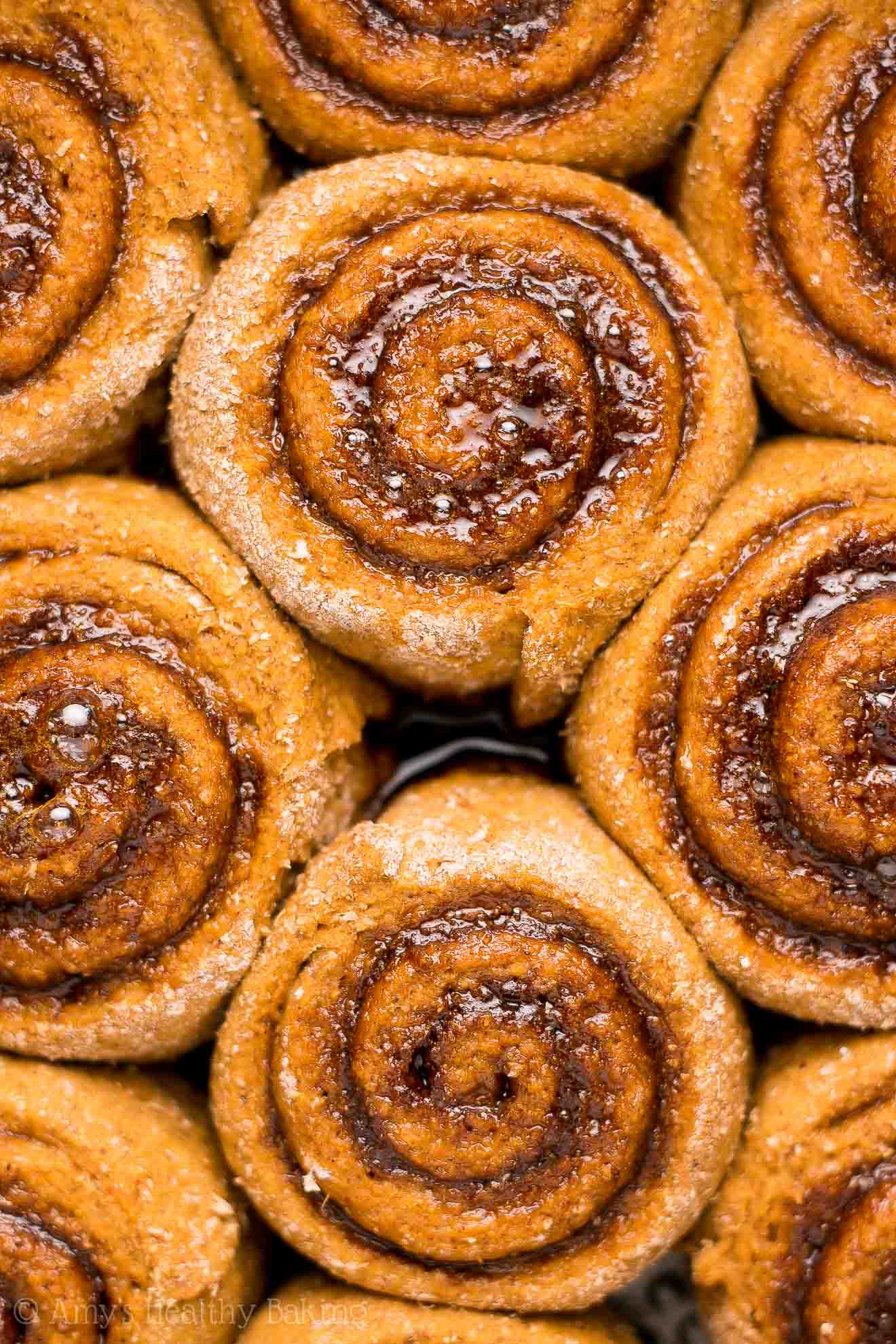 How amazing do those cinnamon rolls look after rising?? They’re so tall and puffy, thanks to Red Star’s awesome yeast! ♡ Now all that’s left is to preheat the oven, pop your pan inside, and… 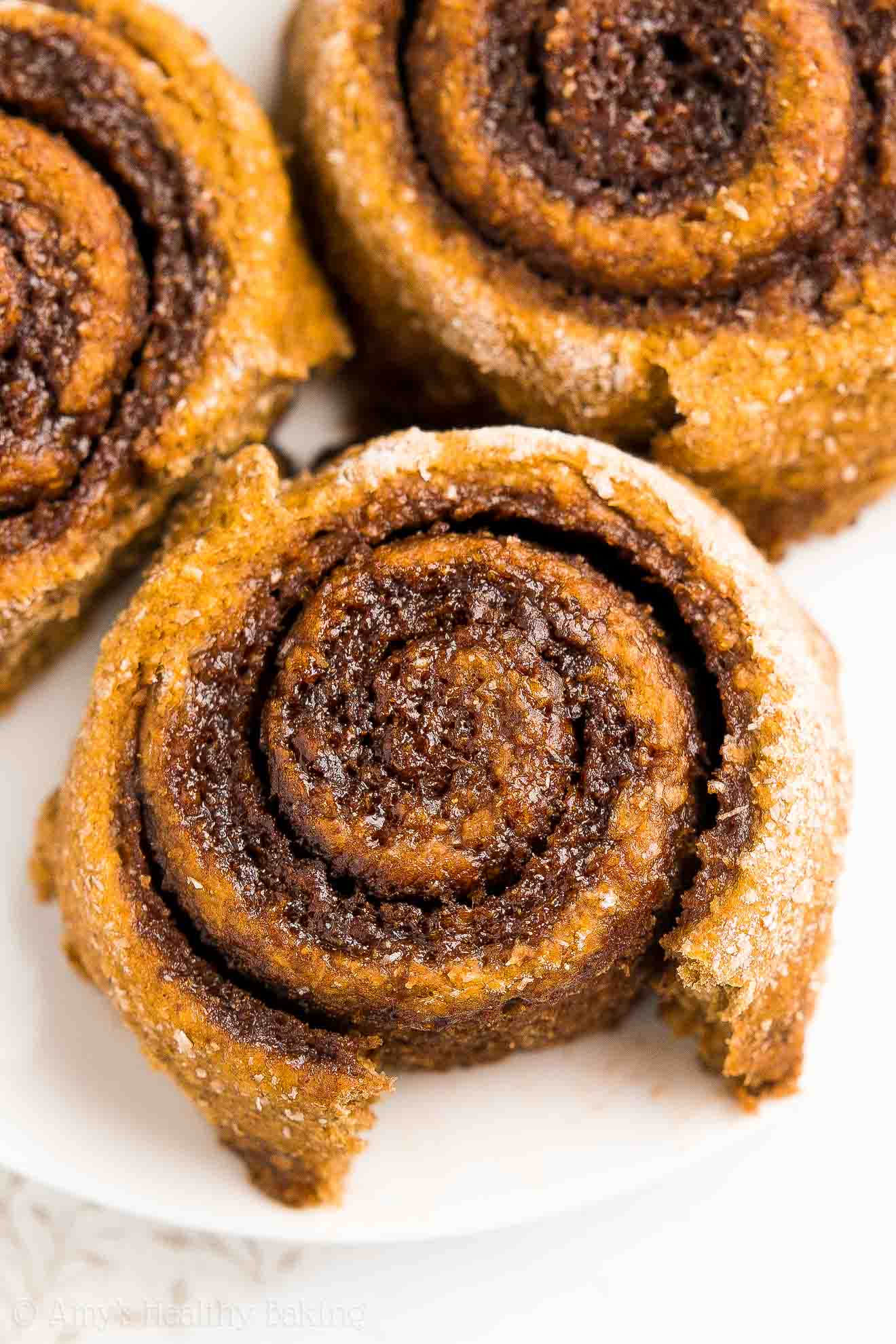 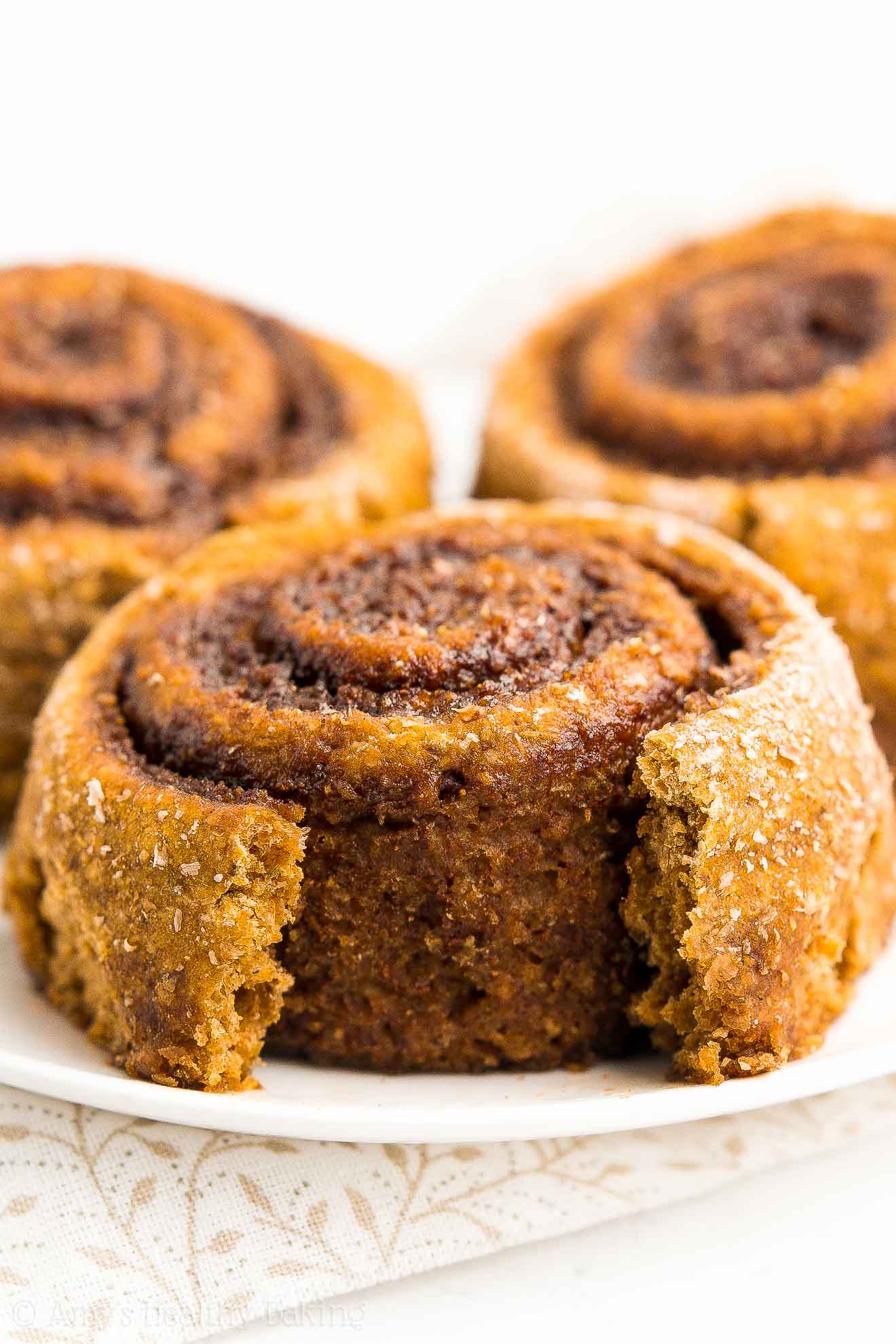 Devour these blissfully cozy and oh-so-irresistible treats! ?? And when you make your own, remember to snap a picture and share it on Instagram using #amyshealthybaking and tagging @amyshealthybaking and @redstaryeast IN the photo itself! (That guarantees I’ll see your picture! ?) I’d love to see your cinnamon rolls and feature them in my Sunday Spotlight series!

I highly recommend using a 9”-round springform pan, like this! Springform pans have taller sides than most traditional cake pans, so this allows your cinnamon rolls to rise properly without touching the top of the towel in Step 6.

For the whole wheat flour, I highly recommend this kind. In my kitchen, is has performed the best out of any brand I’ve tried, and it ensures your cinnamon rolls fully double in size while rising in Step 6. (Other brands of whole wheat flour haven’t risen nearly as high for me!)

I’ve had great luck with Red Star Yeast’s® Quick Rise and Active Dry Yeast products in this recipe too! (Don’t forget to get your coupon for them here!)

For a vegan version, substitute your favorite non-dairy milk and stick-style margarine in place of the butter. (You may substitute coconut oil, but the cinnamon rolls will taste different, and the yeast won’t turn frothy in Step 2.)

Do not substitute regular coffee grounds or brewed coffee! The former will make your cinnamon rolls gritty, while the latter will add too much liquid. (This means you’ll need a lot more flour, and you won’t taste the pumpkin!)

The Healthier Chocolate Treats cookbook is perfect for any and all chocolate lovers. Whether you enjoy chocolate occasionally or every single day (that’d be me!), there are plenty of goodies inside for you! Healthier Chocolate Treats contains 50+ brand new healthier recipes. These recipes have never been seen before or appeared on my blog. You won’t find them anywhere else! And yes—every single one contains some form of chocolate. Whether you prefer milk, dark or white, there are lots of treats inside for you!     What Inspired You to Write Healthier Chocolate Treats? I have always loved chocolate. Every Halloween throughout my childhood, I inverted the entire contents of my bright … END_OF_DOCUMENT_TOKEN_TO_BE_REPLACED