The BEST guilt-free red velvet cupcakes! They’re supremely tender, full of flavor & topped with sweet cream cheese frosting. Easy to make & only 124 calories!
Click here to PIN the recipe and save it for later! 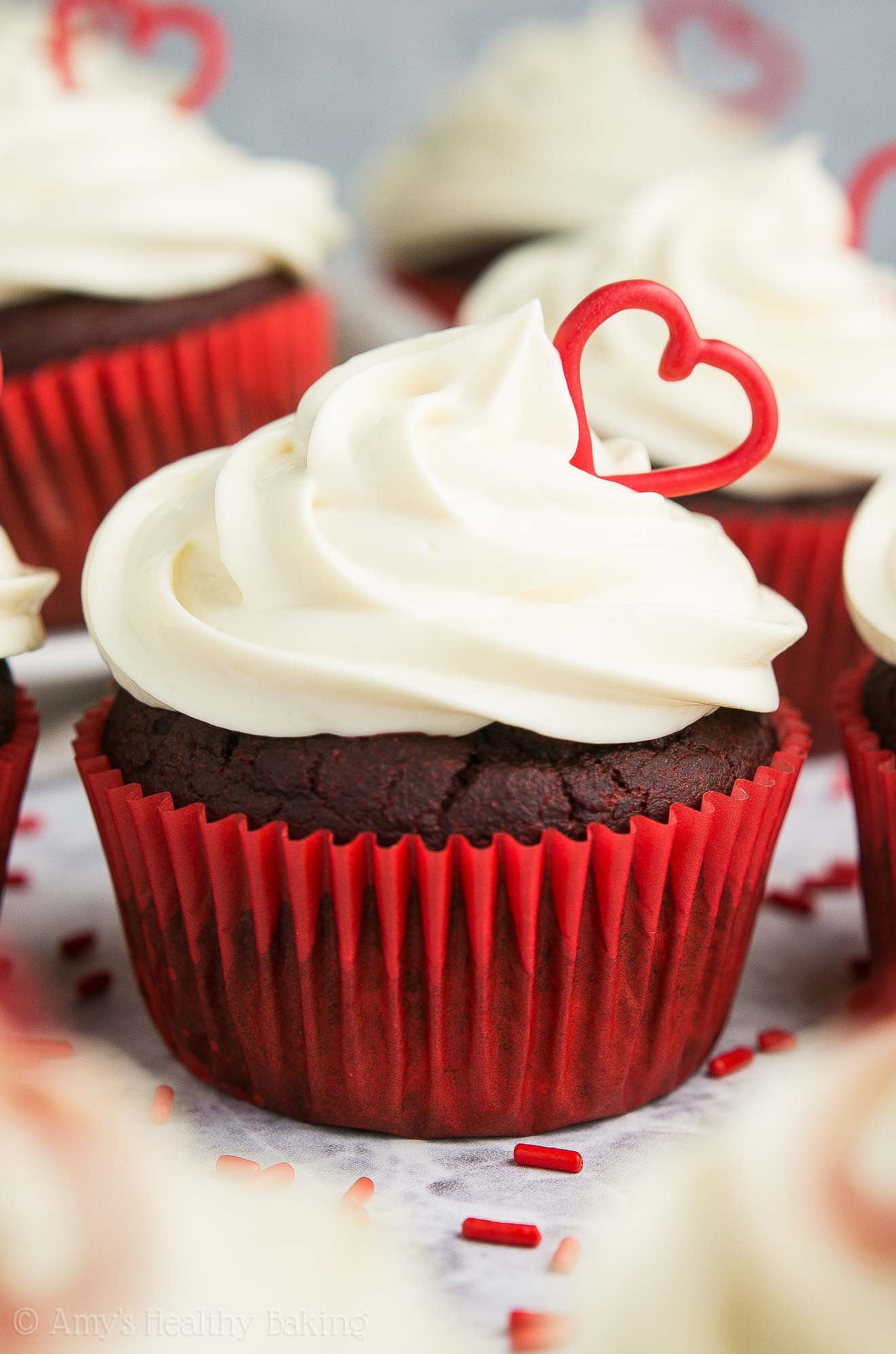 As a huge chocoholic, even as a little girl, I always gravitated towards that cake flavor at birthdays, class parties, and other celebrations, so I tried my very first red velvet cupcake much later in life while at college. It was a gift from my law student neighbors, a thank you for all of the homemade goodies I dropped off for them throughout the year, purchased from a gourmet bakery in town.

When I tried my first bite, I felt surprise and intrigue and excitement all at the same time. Was it chocolaty vanilla? Vanilla-y chocolate? I slowly savored the dessert, a deep crimson red color with rich brown undertones, but as I licked the crumbs from my fingers, I still hadn’t figured out how to define its flavor.

I’ve tried many more red velvet cupcakes since then, and most have tasted rather flat and bland compared to that first one. Garishly red, the same hue as maraschino cherries, instead of that beautiful darker almost mahogany color; rather oily; and cavity-inducing sweet without any chocolate notes… Basically vehicles for the sugary cream cheese frosting on top, more than anything else!

So I set out to create a healthier version, one full of flavor (and not just color!). I’ve tested and tweaked and retested some more… You should see how many iterations of red velvet cupcakes are currently in my fridge and freezer! 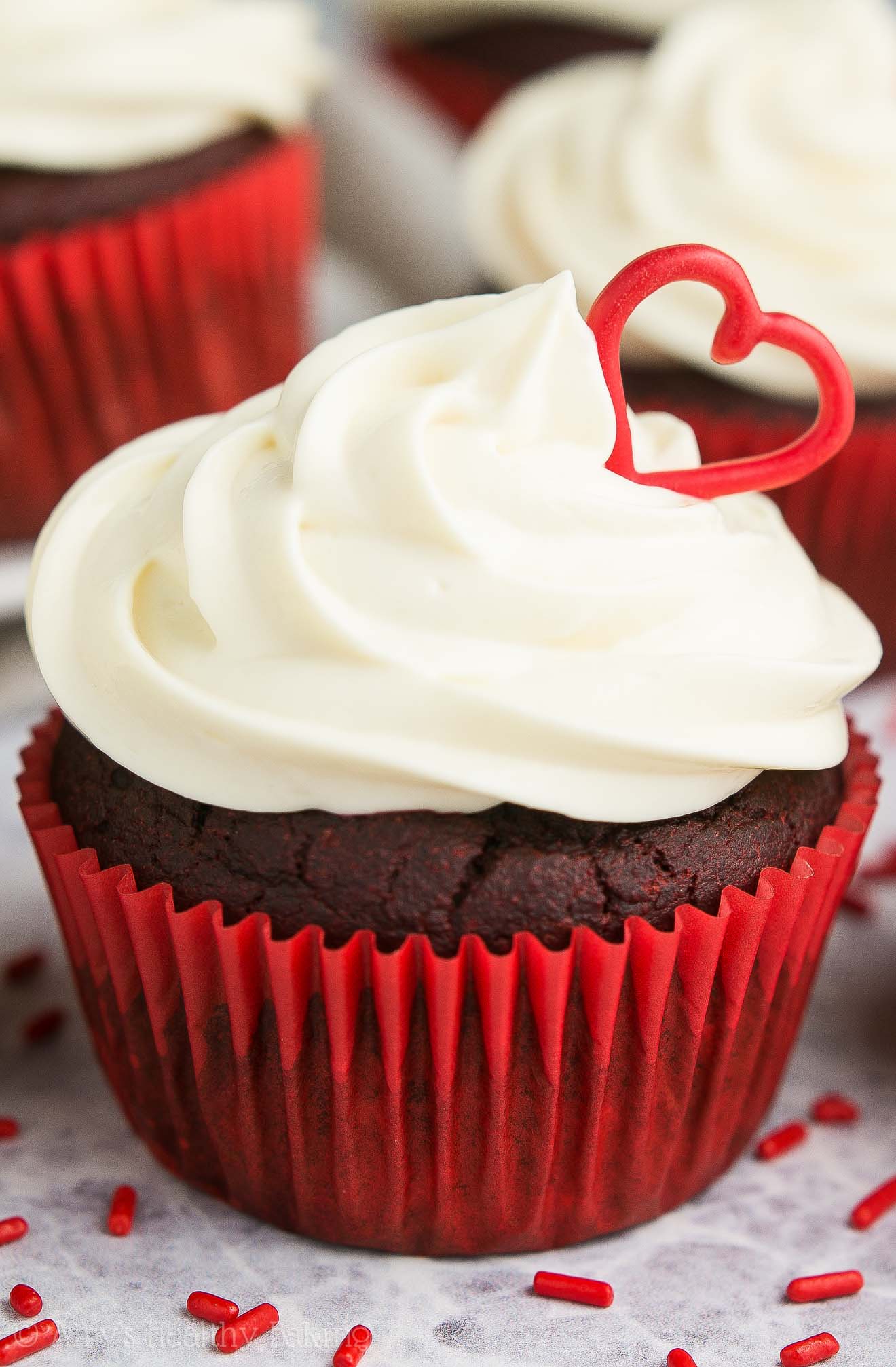 But I finally did it with these Ultimate Healthy Red Velvet Cupcakes! They’re supremely tender with lots of chocolaty vanilla flavor (that’s the definition I finally settled on!). These cupcakes are also surprisingly simple to make and just 124 calories, including the gorgeous swirls of cream cheese frosting! 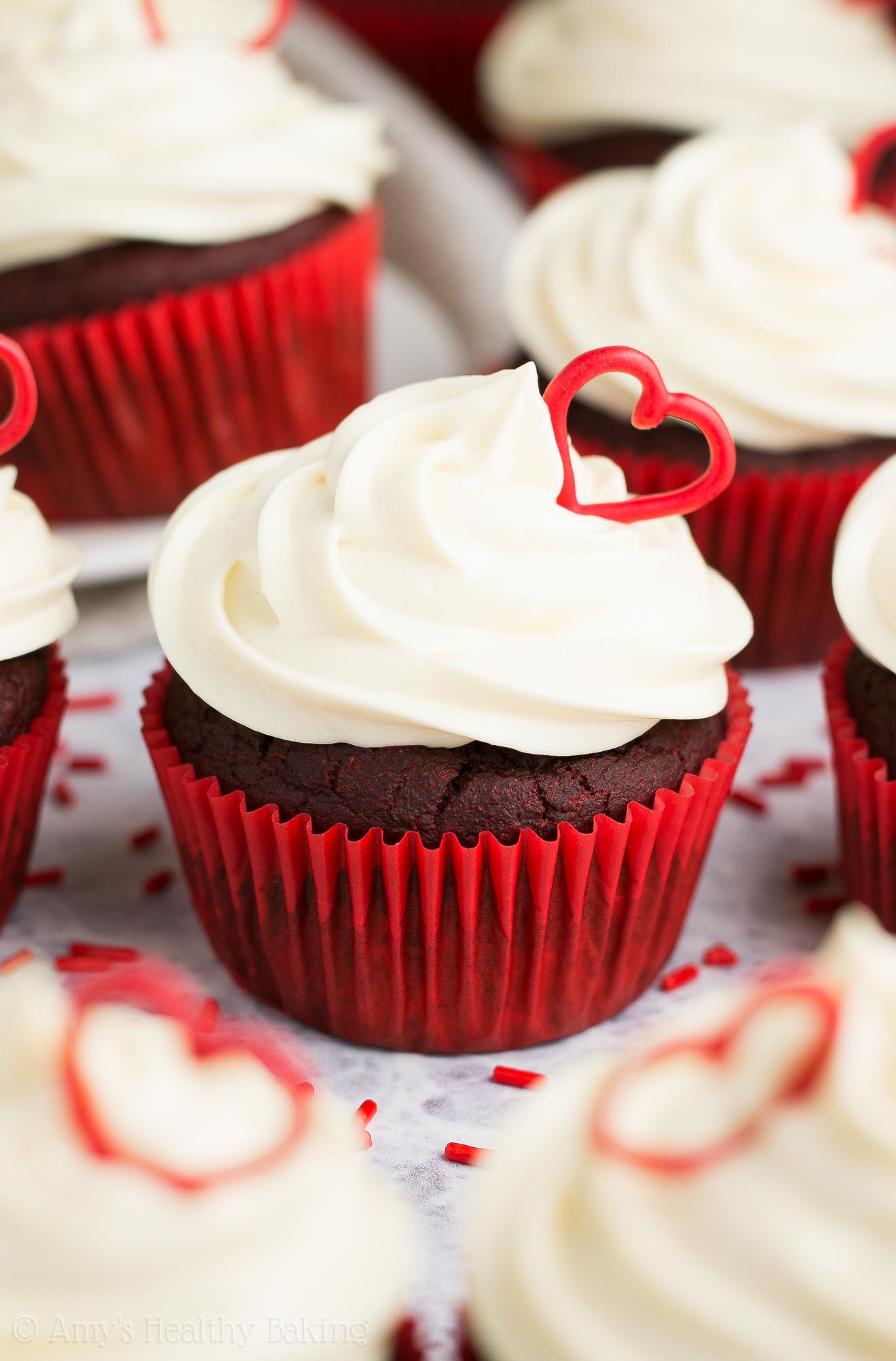 Pretty pretty please, read through this blog post before beginning the recipe!

From what I’ve gathered, red velvet cake became popular in the first half of the 20th century, around the Great Depression and World Wars. During this time, ingredients were more scarce and expensive, so bakers began to get creative to make their cakes moist and tender.

Around then, “velvet” cakes gained popularity (and not just the red variety!). They were named because of their velvety texture, which was achieved with two ways. The first was using baking soda (a base) and vinegar (an acid) to create air bubbles—thus making the cakes rise and giving them a lighter texture, compared to their dense pound cake cousins.

The second was adding something to the regular all-purpose flour to make it behave more like cake flour, which has a lighter texture that’s better suited for cakes. These ingredients varied from cornstarch to potato starch to cocoa powder… But when cocoa powder was used, it reacted with the baking soda and vinegar to create a reddish hue.

However! That was cocoa powder back then. Nowadays, cocoa powder is less acidic because of the process it goes through at the manufacturing facilities. This is especially true of Dutched or “special dark” cocoa powder, so do NOT use that kind! We’re using regular unsweetened cocoa powder (like this!). Even so, it isn’t enough to turn your cupcakes red like those cocoa powders from the early 20th century…

So most modern-day bakers depend on food coloring to give red velvet cake its characteristic color! Both synthetic and natural options are available, but the former typically provides the brightest shade. 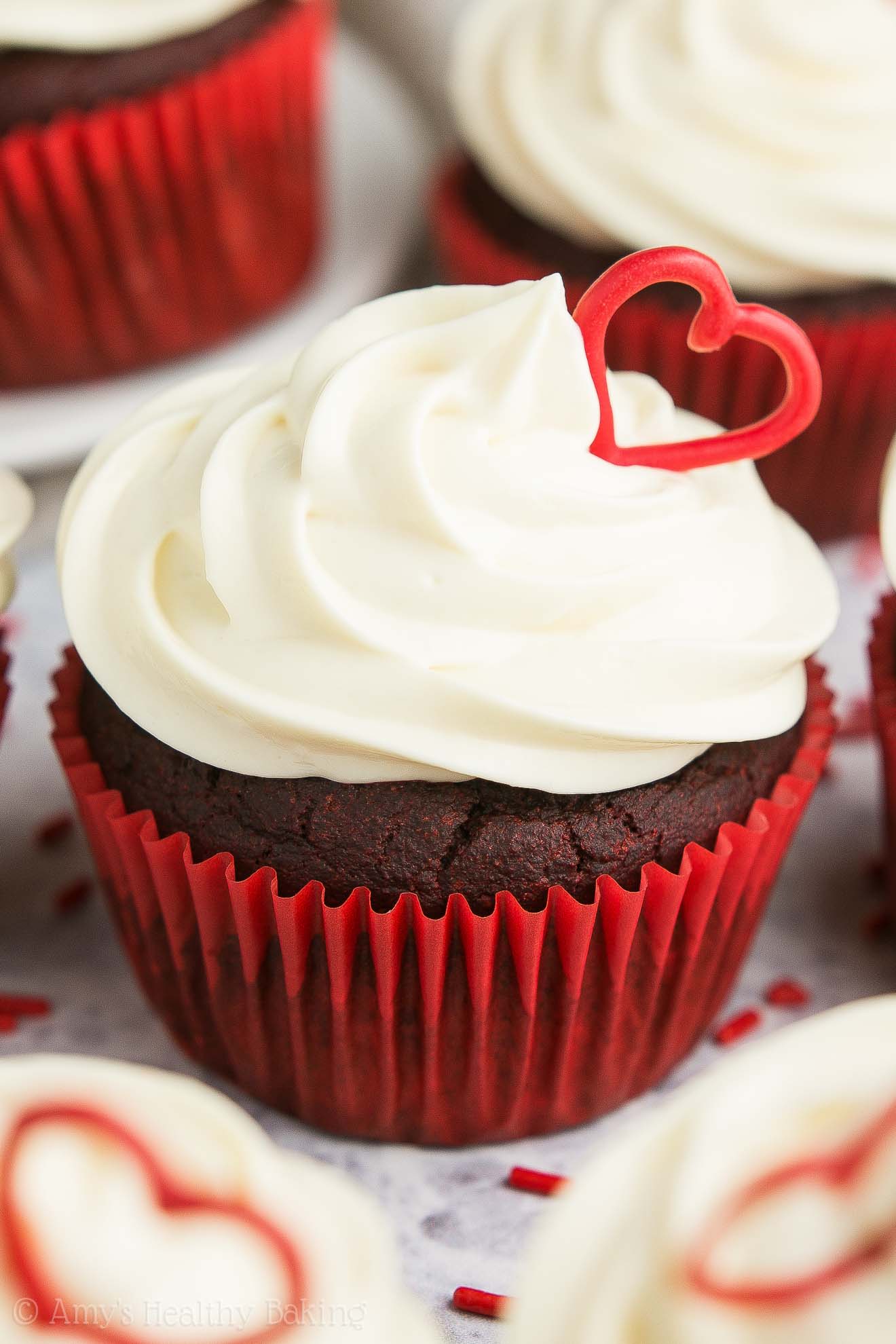 Whew! Still with me?? The history lesson is over… So let’s cover the other ingredients you’ll need for these “skinny” red velvet cupcakes!

Many traditional red velvet recipes only require 2 tablespoons of cocoa powder… But those are the ones that taste rather flat and bland to me. That little cocoa powder may provide a more tender texture, but the resulting cakes’ flavors are rather mediocre.

Instead, I suggest adding ½ cup of cocoa powder! Remember, we’re using the regular unsweetened kind (like this!), not Dutched or special dark. That creates the rich chocolaty vanilla flavor that I absolutely love! But if you aren’t a fan—or you’re more of a traditionalist—you can absolutely replace some of that cocoa powder with white whole wheat flour.

I won’t even get mad. I’ll just each your chocolaty vanilla red velvet cupcake instead—more for me! ? 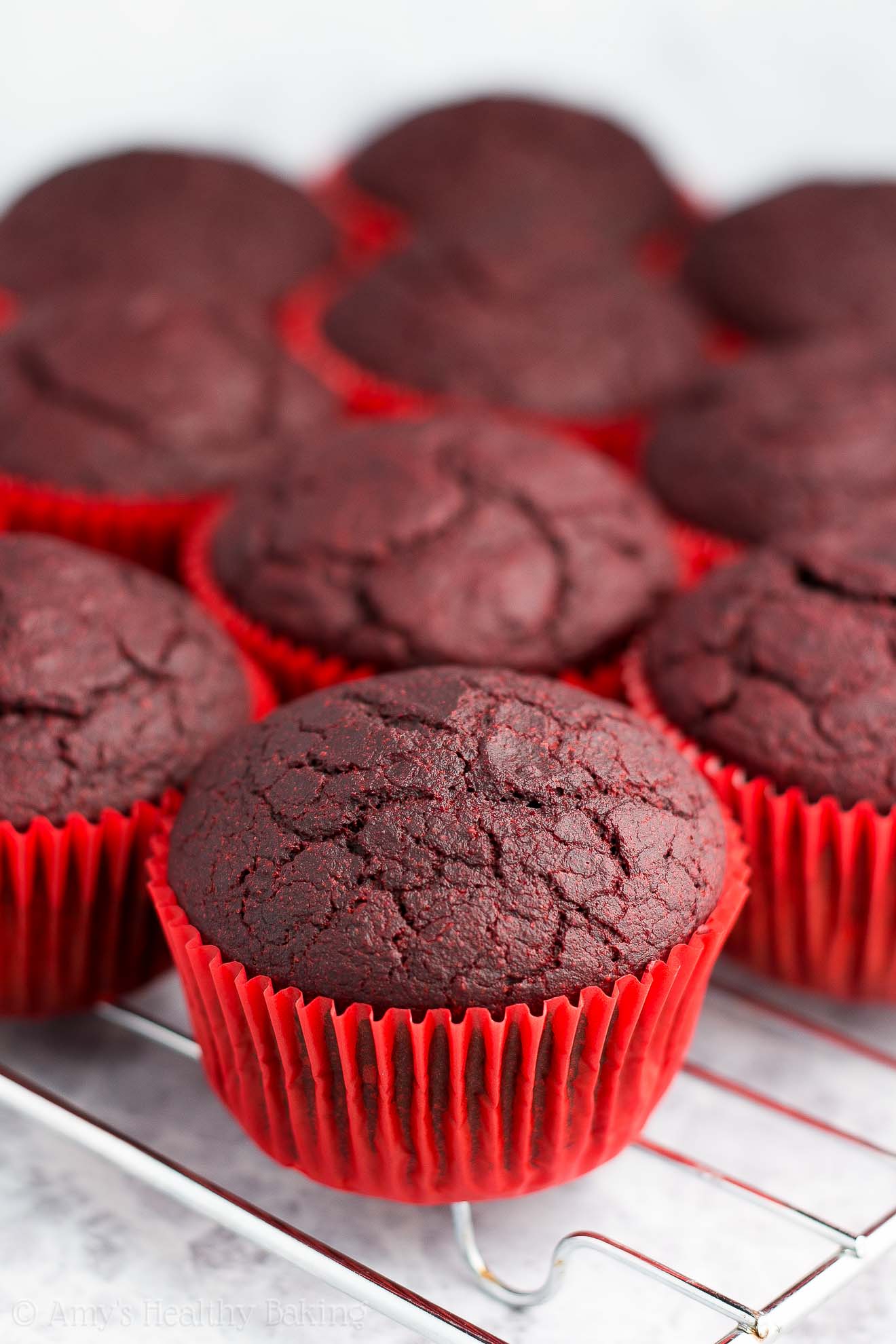 To make these red velvet cupcakes healthier and low-calorie, you’re just using 1 tablespoon of butter. Yes, that’s it! We’re definitely deviating from the traditional recipes here… ? Then you’ll also add in a touch more vanilla extract and butter extract (like this!) to enhance that buttery flavor. Butter extract is shelf-stable and keeps for ages. You can typically find it on the baking aisle right next to the vanilla extract!

Instead of depending on butter or oil, the majority of their tender texture comes from Greek yogurt, one of my favorite ingredients in healthier baking! Greek yogurt adds the same moisture to the cupcake batter as extra butter or oil for a fraction of the calories, and it gives your cupcakes a protein boost, too!

To create that last little bit of tender texture, you’ll use baking soda and vinegar. Again, many traditional recipes call for acidic buttermilk as well, but I almost never keep that on hand and end up making “homemade” buttermilk with vinegar + milk. I’m assuming you’re the same way… So you’ll actually use regular milk and add more vinegar than in most traditional recipes to compensate. No need for buttermilk or a special trip to the grocery store! I’m trying to make life easier for you! ? 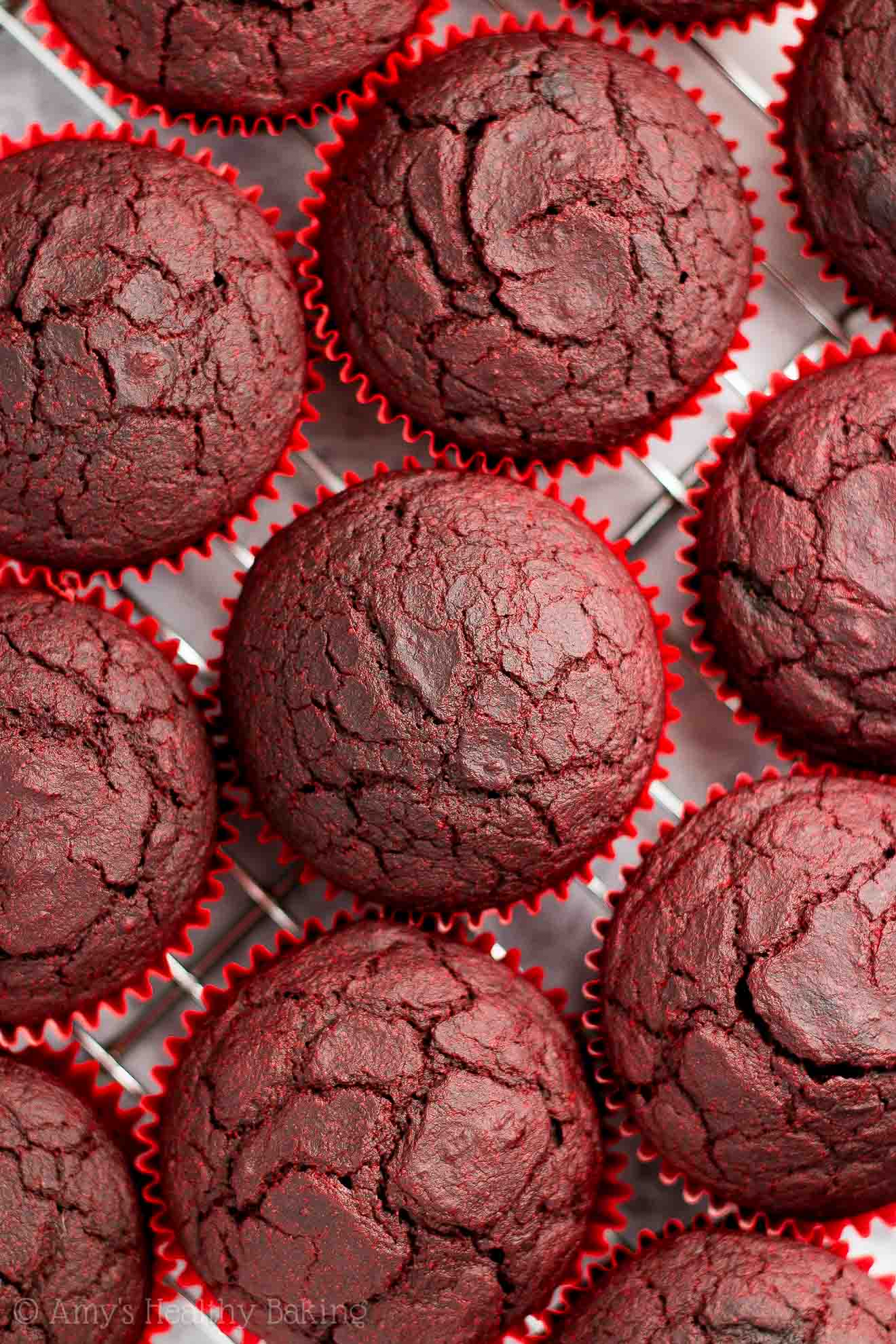 To sweeten these healthy red velvet cupcakes, you’ll use a combination of liquid vanilla stevia (like this!) and granulated stevia (this kind!). Stevia is a plant-based, no-calorie sweetener, and it contains nothing refined or artificial (aka it’s clean-eating friendly!). I tried really hard to only use my favorite vanilla stevia… But the cupcakes just weren’t sweet enough until I added that granulated stevia. I promise these cupcakes are totally worth buying both!

I buy my vanilla stevia online here because that’s the cheapest price I’ve found. You can also find it at many health-oriented grocery stores. The granulated stevia is online here, but many Target stores and regular grocery stores also carry it! Look for it on the baking aisle near the granulated sugar and sugar substitutes. I love both stevia products because I don’t notice any strange aftertastes like with some other brands. (And you’ll use the stevia products in all of these recipes of mine, too!) 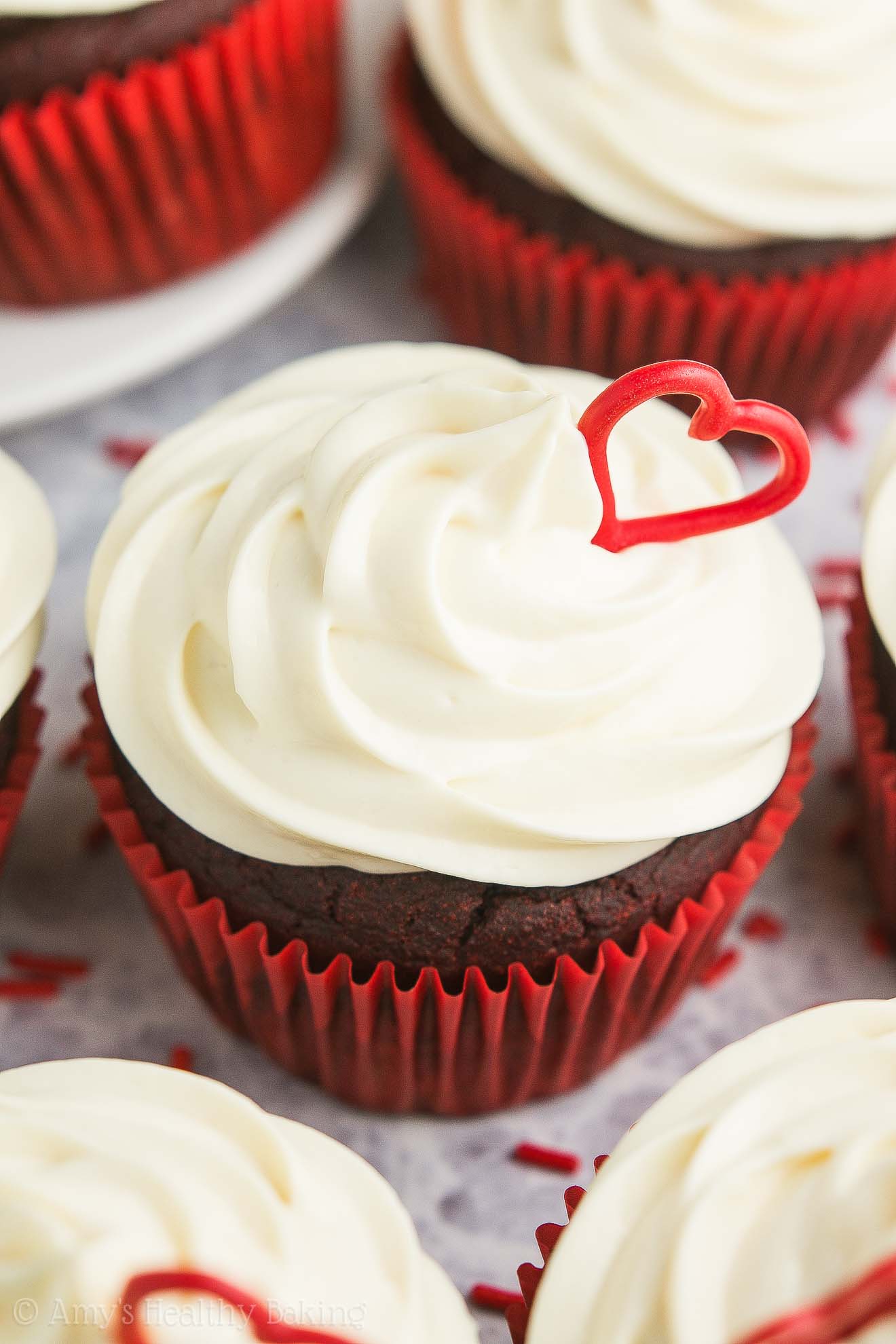 Time for the sweet cream cheese frosting! It’s super simple to make. Just beat Greek yogurt, light cream cheese, more vanilla stevia (like this!), and instant cheesecake pudding mix (like this!) with a mixer for 2 minutes… Then pop the bowl in the fridge to chill for 2 hours. That thickens the frosting and makes it stiff enough to pipe into those beautiful swirls!

Hint: Can’t find instant pudding mix? Or just not a fan? Then use this cream cheese frosting recipe of mine instead! It’s not pipe-able, but it still tastes delicious! 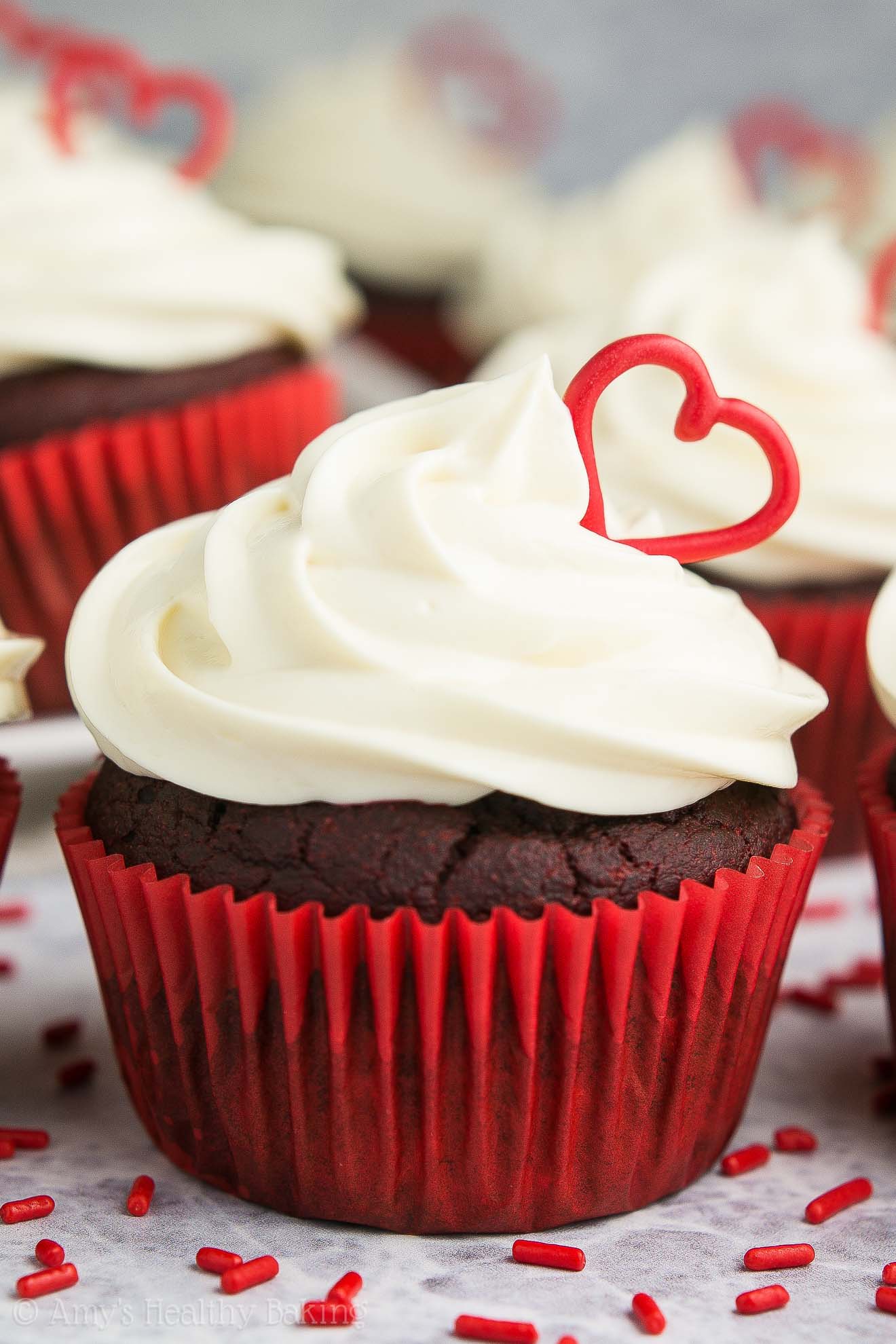 Just look at those gorgeous guilt-free red velvet cupcakes! Truly perfect for any occasion… Birthdays, Valentine’s Day, Christmas, the 4th of July… Or anytime you’re craving a cupcake! ?? And when you make your own, remember to snap a picture and share it on Instagram using #amyshealthybaking and tagging @amyshealthybaking IN the photo itself! (That guarantees I’ll see your picture! ?) I’d love to see your cupcakes!

Click here to PIN the recipe and save it for later!
Yields: 12 cupcakes
These truly are the BEST healthy red velvet cupcakes! They’re supremely tender, full of rich flavor, and topped with an irresistible sweet cream cheese frosting. The cupcakes are best if eaten the same day they’re made, but they’ll keep for at least three days if stored in an airtight container in the refrigerator.
Notes: For the gluten-free flour, use the following blend: 1 cup (120g) millet flour, ½ cup (60g) tapioca flour, ½ cup (60g) brown rice flour, and 1 ½ teaspoons xanthan gum. Most store-bought gluten-free flour blends (like this one!) should work as well, if measured like this.

Do no use Dutched or special dark cocoa powder! They’re much less acidic than regular cocoa powder (like this), so the texture and flavor of these cupcakes won’t be the same.

Remember to measure the flour and cocoa powder correctly, using this method or a kitchen scale. (← That’s the one I own and love!) Too much of either will dry out your cupcake batter, and too much cocoa powder may make your cupcakes taste bitter.

I highly recommend using the vanilla stevia and granulated stevia! They’re some of my favorite ingredients (you’ll use them in all of these recipes of mine!). I buy my vanilla stevia online here because that’s the cheapest price I’ve found. I’ve bought the granulated stevia online here, and I’ve also found it in many Target and regular grocery stores on the baking aisle.

For sweeter cupcakes, increase the granulated stevia by an additional 2 tablespoons (12g). The baking time will increase by about 1-2 minutes.

If you prefer not to use stevia in the cupcakes, substitute 1 ½ cups (288g) of coconut sugar (or brown sugar or granulated sugar, if you’re not concerned about making the cupcakes “clean-eating friendly!”), and reduce the milk to 7-8 tablespoons (105-120mL). The baking time may vary with this substitution. If you prefer not to use the vanilla stevia in the frosting, then substitute ¼ cup of Truvia or granulated sugar.

You just need the dry instant pudding mix—don’t prepare it according to the package directions! For a more classic spreadable (not pipe-able) cream cheese frosting that does NOT use instant pudding (and is clean-eating friendly), use this recipe of mine.

For red velvet cupcakes that have more vanilla flavor (and less of the “chocolaty vanilla” flavor that my taste testers and I preferred!), use 2 cups + 6 tablespoons (285) of white whole wheat flour and 2 tablespoons (10g) of cocoa powder instead.

For more information about the ingredients and why they’re required to create the best healthy red velvet cupcakes, please read my blog post above this recipe!

The Healthier Chocolate Treats cookbook is perfect for any and all chocolate lovers. Whether you enjoy chocolate occasionally or every single day (that’d be me!), there are plenty of goodies inside for you! Healthier Chocolate Treats contains 50+ brand new healthier recipes. These recipes have never been seen before or appeared on my blog. You won’t find them anywhere else! And yes—every single one contains some form of chocolate. Whether you prefer milk, dark or white, there are lots of treats inside for you!     What Inspired You to Write Healthier Chocolate Treats? I have always loved chocolate. Every Halloween throughout my childhood, I inverted the entire contents of my bright … END_OF_DOCUMENT_TOKEN_TO_BE_REPLACED