Learn how to make tender spice cupcakes with fresh apples & topped with cinnamon frosting—all from scratch! They’re just 114 calories & contain no refined flour or sugar!
Click here to PIN the recipe and save it for later! 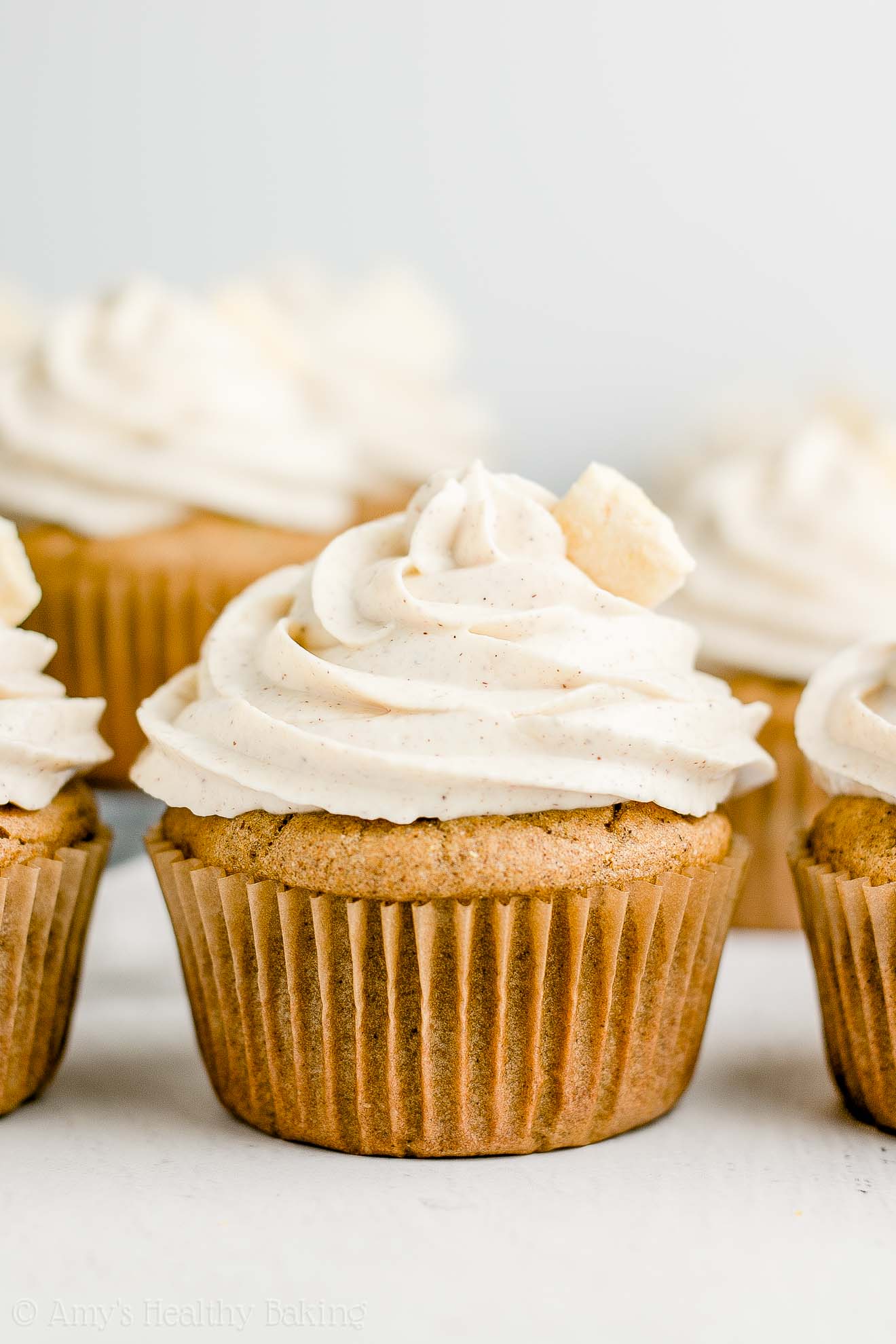 Just a few days after I moved into my house last summer, I knocked on a few of my new neighbors’ doors with plates of these, these, and these… Although slightly surprised, they were still extremely welcoming and gracious as they accepted my homemade treats. They couldn’t believe that I was the one baking for them—usually it’s the other way around when a new person moves to the neighborhood!

I quickly explained how Amy’s Healthy Baking was my full-time job, and I reassured them that they were doing me a favor by taking all of those sweets off my hands. While I eat some of everything that I bake, I don’t exactly want to polish off an entire pan of brownies or two dozen cookies by myself… Especially knowing how many new recipes I test each week!

Over the winter, one of the families knocked on my door and gave me a brown paper bag with a thank-you present inside. “It’s for your dog!” they actually revealed, and when I peeked inside… 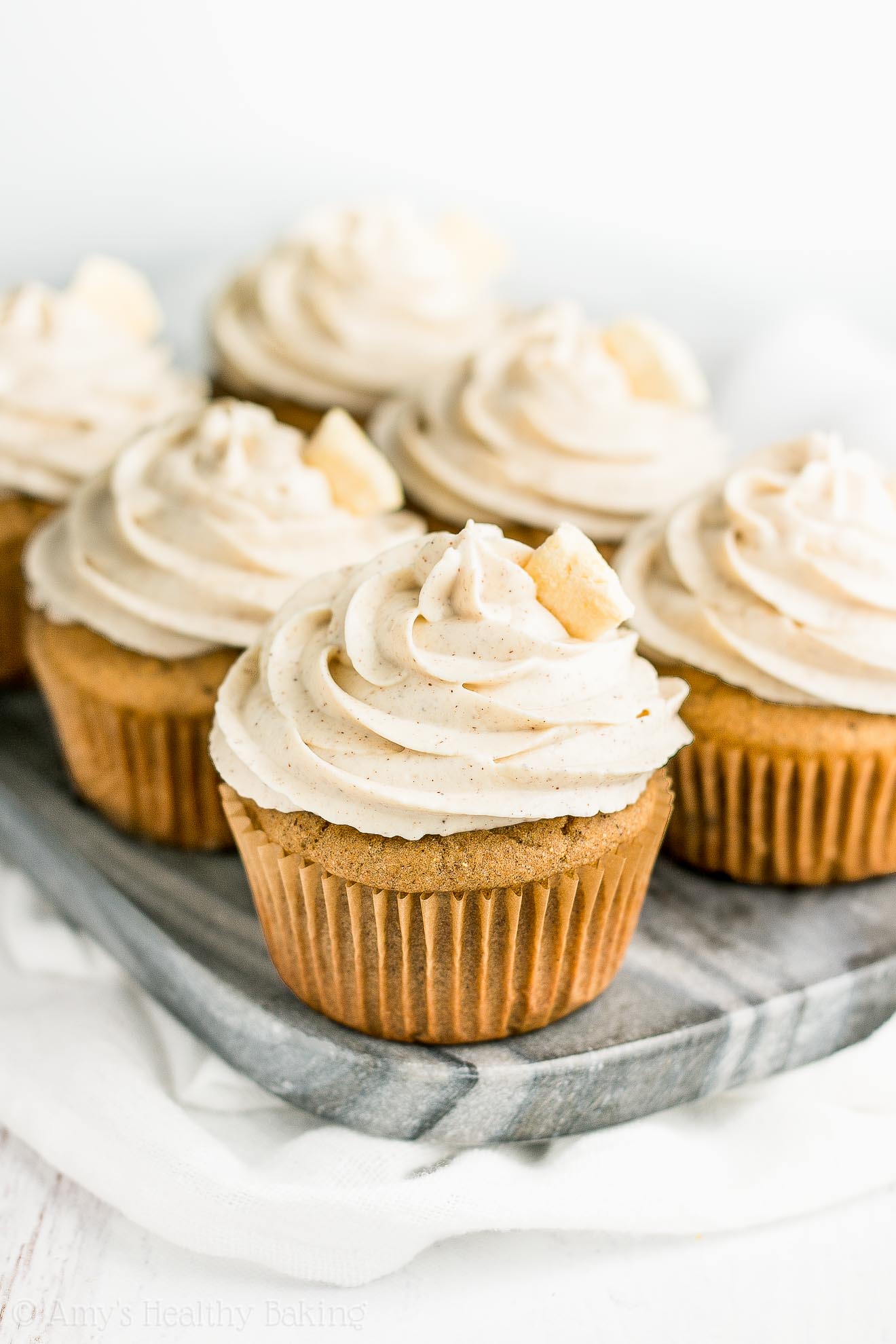 I saw two small “pup-cakes” from the nearest gourmet Sprinkles cupcake bakery! How sweet was that?? (No pun intended…)

Back inside, I unwrapped one of them and called over my little dog. I let her sniff the pup-cake, and she looked up at me with questioning eyes, as if to ask, “Is that really for me? It looks like a human treat…” I laughed as I gave it to her, and she immediately dashed over to her bed to devour it. Not a single crumb was left! 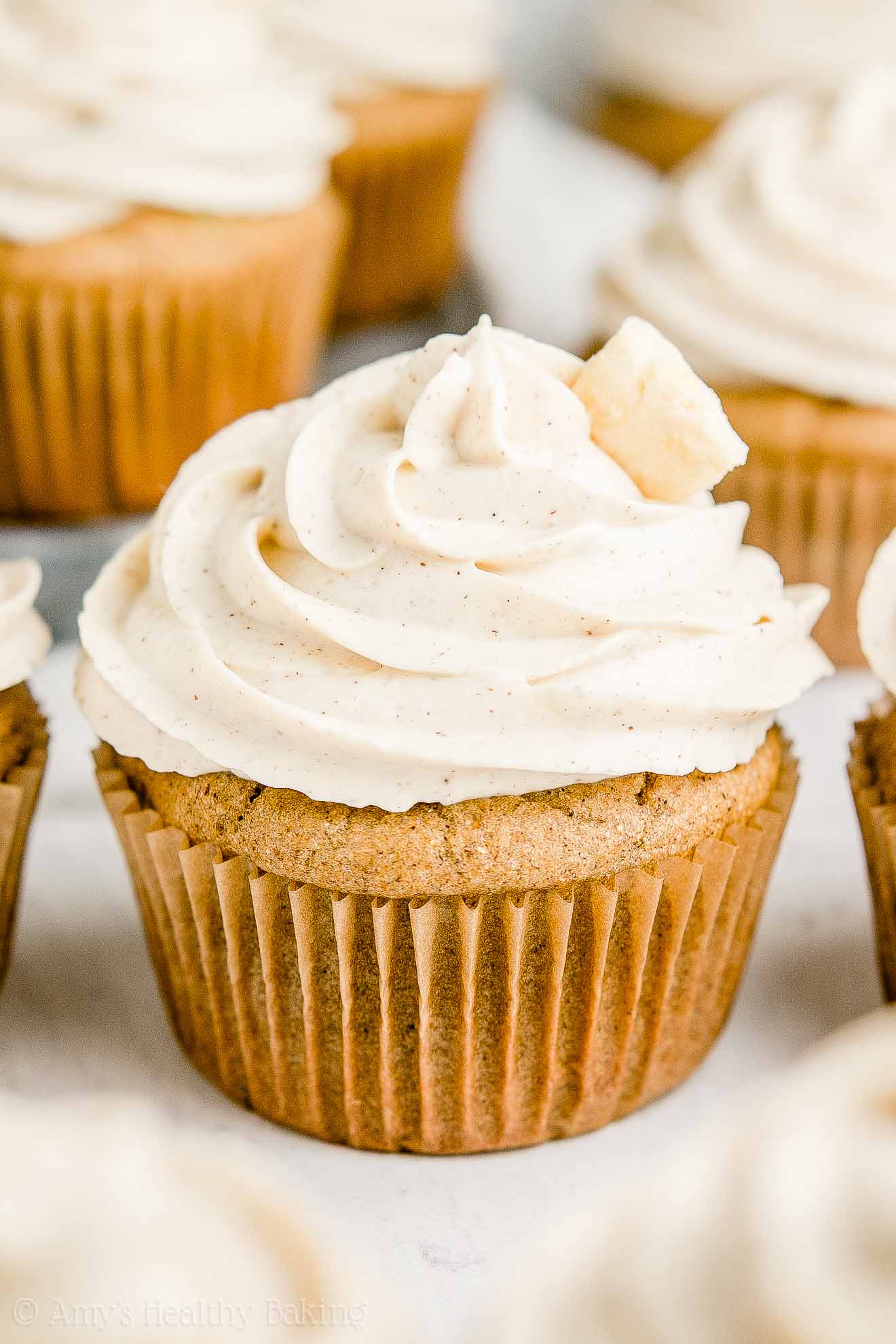 Yet now, my little dog comes running into the kitchen any time I bake cupcakes, including these Healthy Cinnamon Apple Cupcakes… She thinks they’re for her! Instead, I gave her a couple leftover apple slices and saved these cupcakes for us humans!

These healthy cupcakes are supremely tender and full of cozy spice flavor. They basically taste like apple pie, just in cupcake form! Yet unlike traditional apple pie with its calorie-laden crust and sugary filling, these cupcakes contain no refined flour or sugar and only 114 calories! 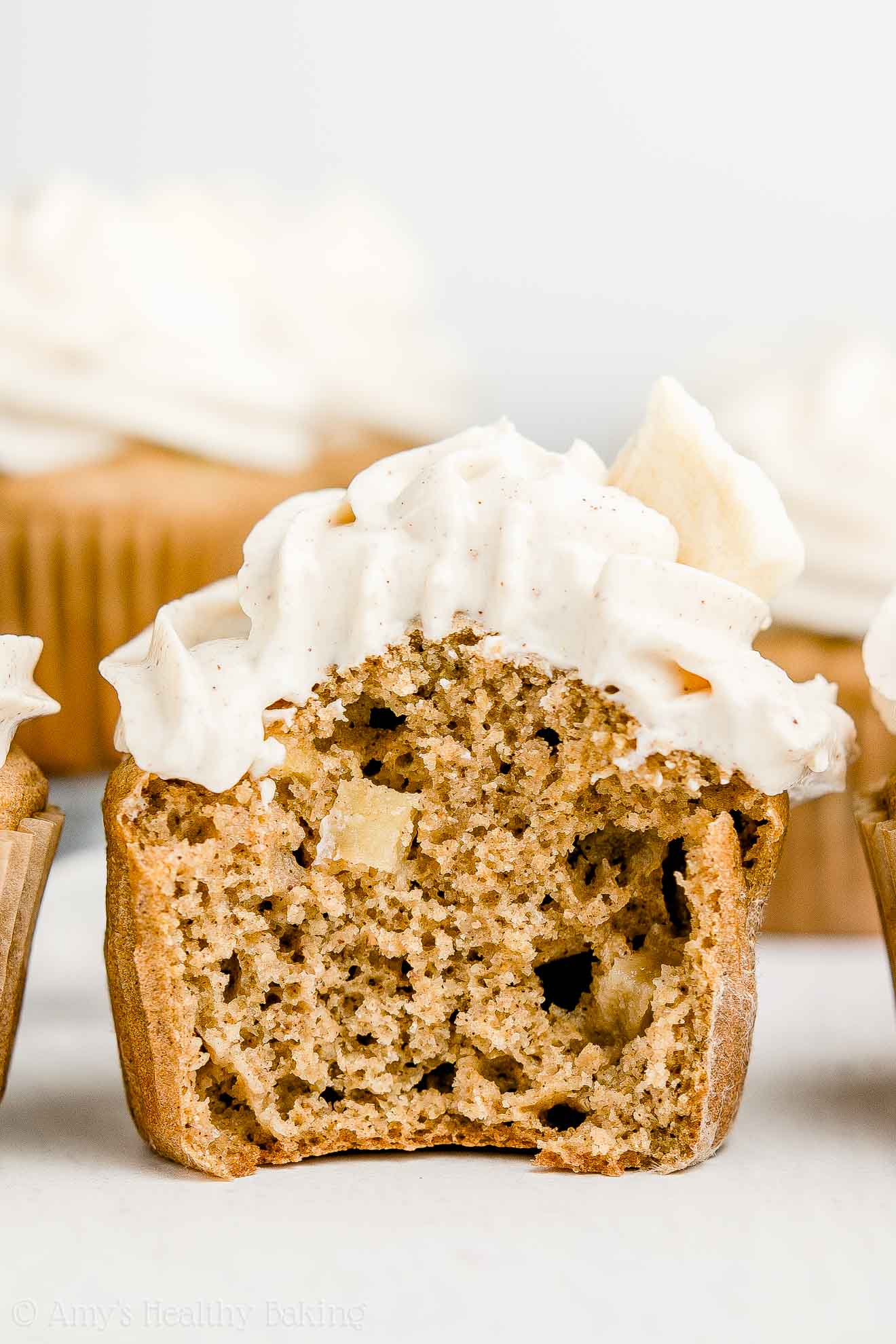 Let’s talk about how to make these healthy apple cupcakes! 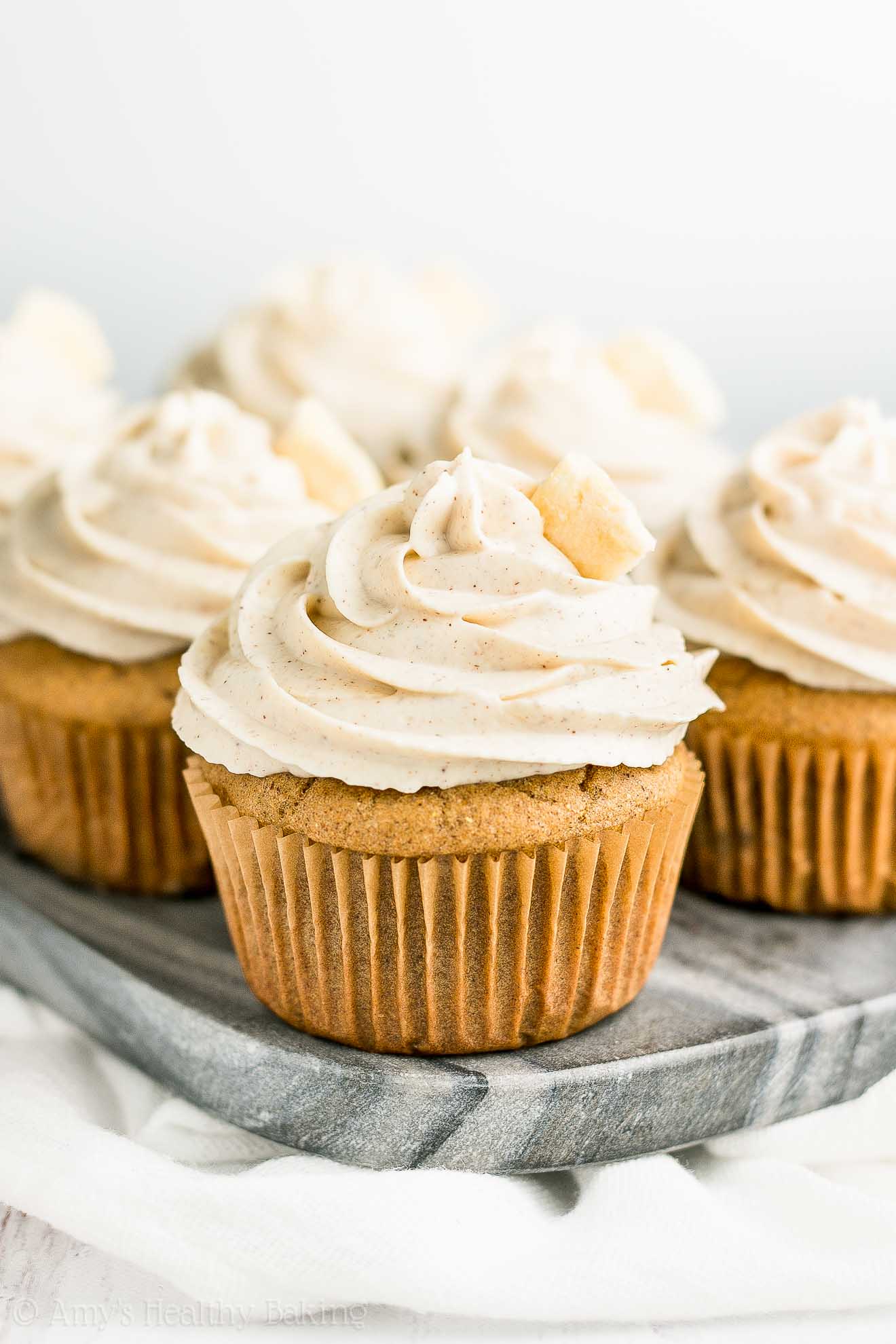 Then you’ll mix a trio of spices into the flour: cinnamon (I’m obsessed with this kind!), allspice (like this!), and nutmeg (like this!). Allspice is actually a single spice, not a mix of spices! Its name can be confusing… But allspice is named because it tastes like a combination of cinnamon, nutmeg, and cloves.

The allspice and nutmeg give a richness and added depth to the spice flavor, so don’t skip them!

Unlike traditional cupcake recipes (or even traditional apple pie recipes!), these healthy apple cupcakes only contain ½ tablespoon of butter. Yes, that’s it! The rest of their tender texture comes from… Do you know? 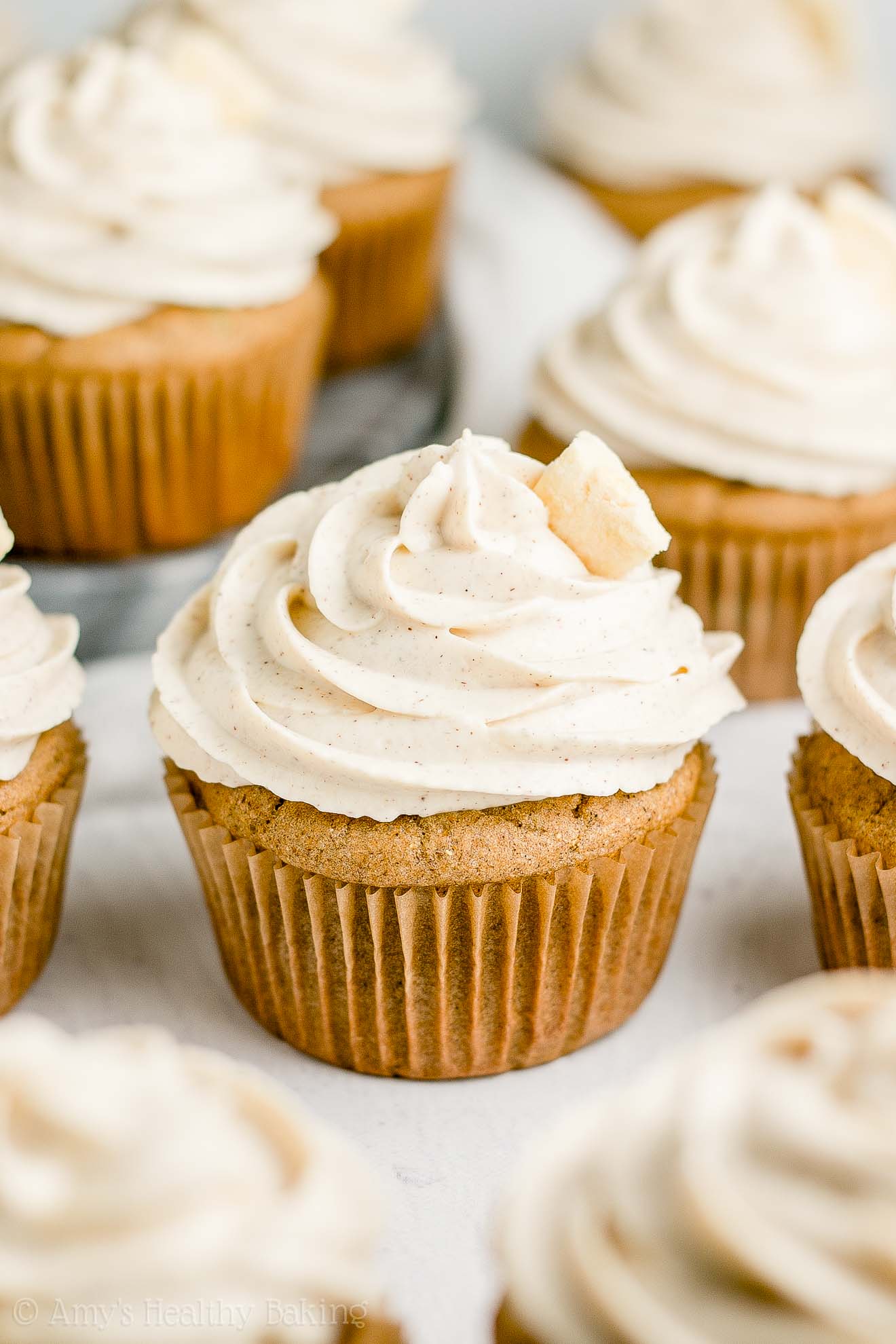 If you’ve been around my blog for a while, I’m sure you do. It’s Greek yogurt! Greek yogurt adds the same moisture to your cupcake batter as extra butter or oil, and it gives your healthy cupcakes a big protein boost, too!

You’ll skip the refined granulated sugar and sweeten your cinnamon apple cupcakes with another one of my favorite ingredients: liquid stevia (I love this one!). Stevia is a plant-based, no-calorie sweetener that contains nothing refined or artificial (aka it’s clean eating friendly!). It’s also highly concentrated. You just need 3 ½ teaspoons to sweeten this entire batch of cupcakes!

This is the liquid stevia that I buy because I love its sweet flavor and don’t notice any strange aftertaste, like with some other stevia products. Although you can find it at many health-oriented grocery stores, I buy mine online here because that’s the cheapest price I’ve found. (And you’ll use it in all of these recipes of mine, too!) 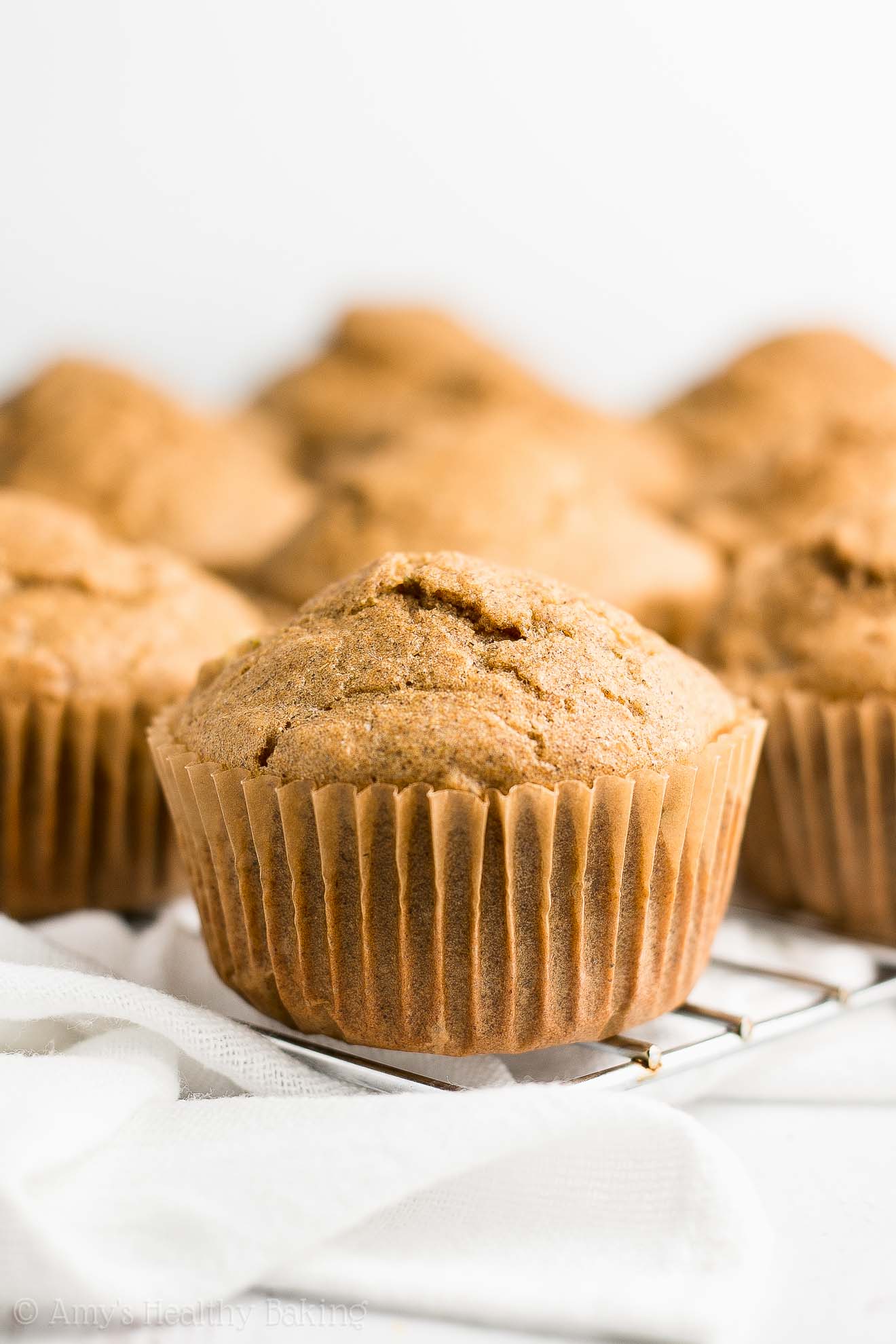 Time for the most important part… The diced apple! I use red Fuji apples because they have a perfect texture for baking (nice and firm!), and they also have lots of natural sweetness. Remember to dice them finely, no larger than the size of chocolate chips, to ensure they full cook through and soften while your cupcakes bake!

But before you dollop your batter into the pan, remember to coat your cupcake liners with cooking spray! Low-fat batters like this one stick to liners like superglue, so coating them with cooking spray first ensures that the liners easily peel away. 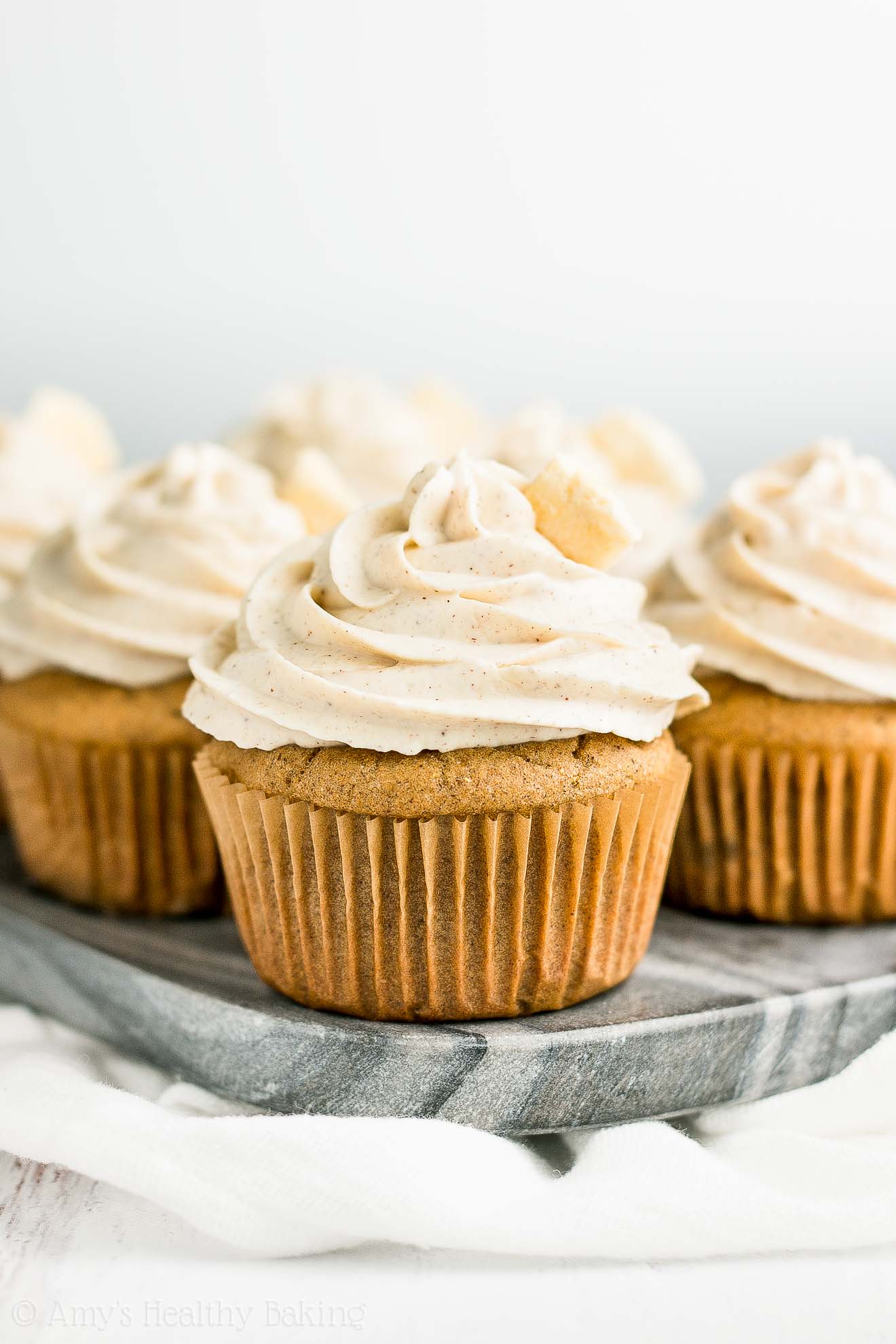 Ready to make the healthy cinnamon frosting? It actually starts with more Greek yogurt! This is my favorite Greek yogurt for frosting because it’s much thicker than any other brand I’ve tried… And thick frosting holds its shape after piping it onto the cupcakes!

And of course, we can’t forget the cinnamon (remember, this is my favorite!) and a bit more liquid stevia (I use this one!) for that sweet and cozy flavor. In all honesty… I could eat a bowl of this frosting for breakfast! 😉 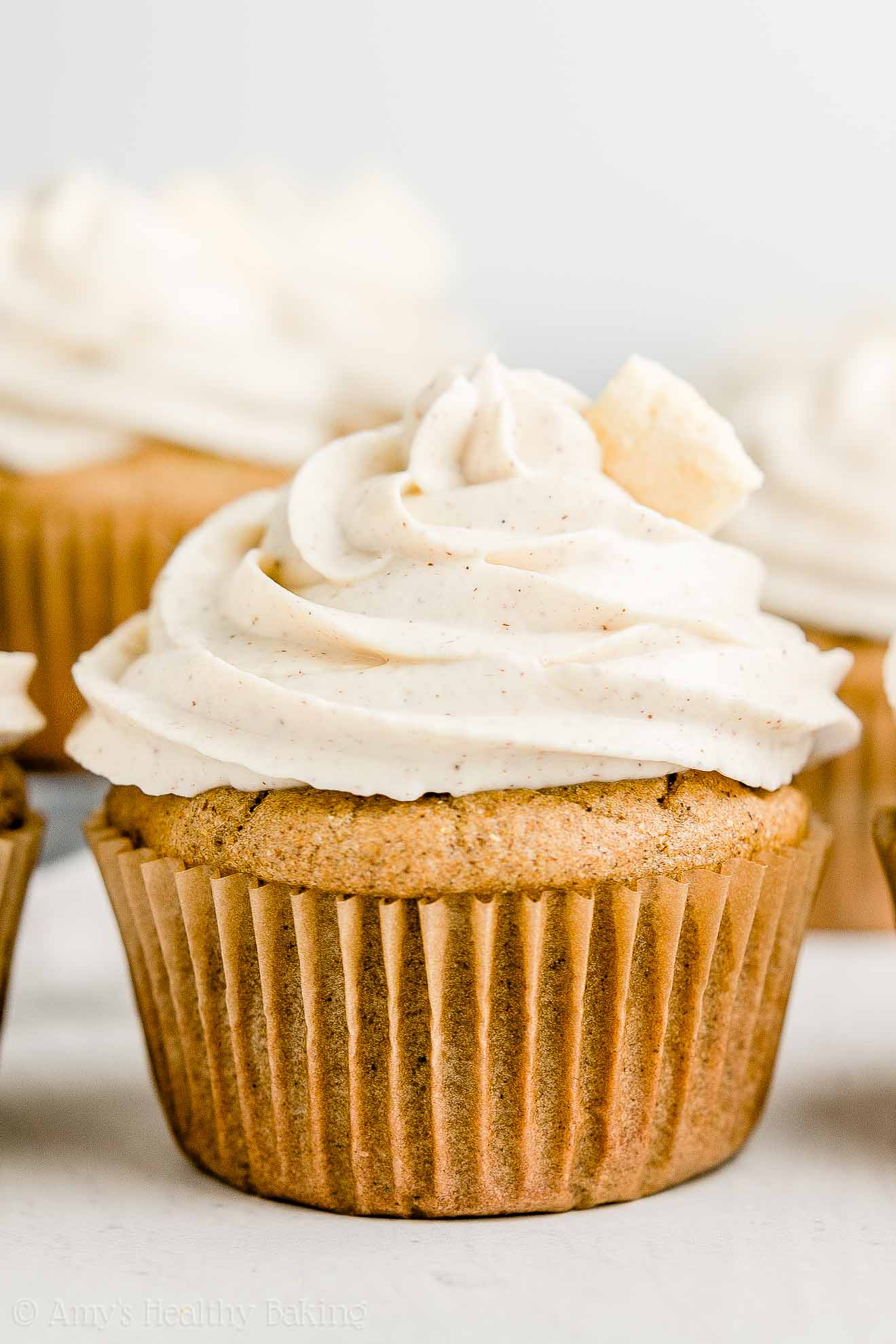 How tempting do these healthy cinnamon apple cupcakes look?? They’re perfect for the 4th of July, Memorial Day, Labor Day, fall days… Or any day you’re craving a cupcake!

And when you make your own, remember to snap a picture and share it on Instagram using #amyshealthybaking and tagging @amyshealthybaking IN the photo itself! (That guarantees I’ll see your picture! 🙂 ) I’d love to see your healthy cupcakes!

Click here to PIN the recipe and save it for later!
Yields: 12 cupcakes
These cupcakes practically taste like apple pie, just in cupcake form! They’re supremely tender with lots of cozy spice flavor, both in the batter and in the frosting. They’re perfect for the 4th of July, Memorial or Labor Day, or any day you’re craving spice cake! Leftovers will keep for at least 3 days (if not longer) if stored in an airtight container in the refrigerator.
Notes: For the gluten-free flour, use the following blend: 1 cup (120g) millet flour, ½ cup (60g) tapioca flour, ½ cup (60g) brown rice flour, and 1 ¼ teaspoon xanthan gum. Most store-bought gluten-free flour blends (like this one!) should work as well, if measured like this.

I highly recommend using the liquid stevia! It’s one of my favorite ingredients (you’ll use it in all of these recipes of mine!), and I buy it online here because that’s the cheapest price I’ve found. For sweeter cupcakes, increase the liquid stevia by ½ teaspoon (for 4 teaspoons total).

If you prefer not to use stevia in the cupcakes, substitute ¾ cup + 2 tablespoons (210mL) of agave, honey, or pure maple syrup for the liquid stevia. Omit the milk if using any of those liquid sweeteners. (The batter should be fairly thick, similar to muffin batter.) If you prefer not to use the liquid stevia in the frosting, then substitute 1 ½ teaspoons of this powdered stevia OR ¼ cup of Truvia or granulated sugar.

I use Fuji apples because they have a great texture for baking and lots of natural sweetness. Make sure to cut them to be no larger than chocolate chips to ensure your cupcakes bake evenly.

This is my preferred Greek yogurt for the frosting because it's extremely thick!

You just need the dry instant pudding mix (I use this one!)—don’t prepare it according to the package directions! You may omit it, but you’ll need to increase the liquid stevia. Also, do NOT beat it for 2 minutes! Simply mix until all of the ingredients are just barely combined. Without the instant pudding mix, the frosting will no longer be stiff enough to pipe, so you’ll need to spread it on the cupcakes instead.

The Healthier Chocolate Treats cookbook is perfect for any and all chocolate lovers. Whether you enjoy chocolate occasionally or every single day (that’d be me!), there are plenty of goodies inside for you! Healthier Chocolate Treats contains 50+ brand new healthier recipes. These recipes have never been seen before or appeared on my blog. You won’t find them anywhere else! And yes—every single one contains some form of chocolate. Whether you prefer milk, dark or white, there are lots of treats inside for you!     What Inspired You to Write Healthier Chocolate Treats? I have always loved chocolate. Every Halloween throughout my childhood, I inverted the entire contents of my bright orange jack-o-lantern bucket … END_OF_DOCUMENT_TOKEN_TO_BE_REPLACED