Learn how to make low-calorie zucchini brownies with this easy recipe! They’re extremely rich & fudgy with just 63 calories! They don’t taste healthy at all!
Click here to PIN the recipe and save it for later! 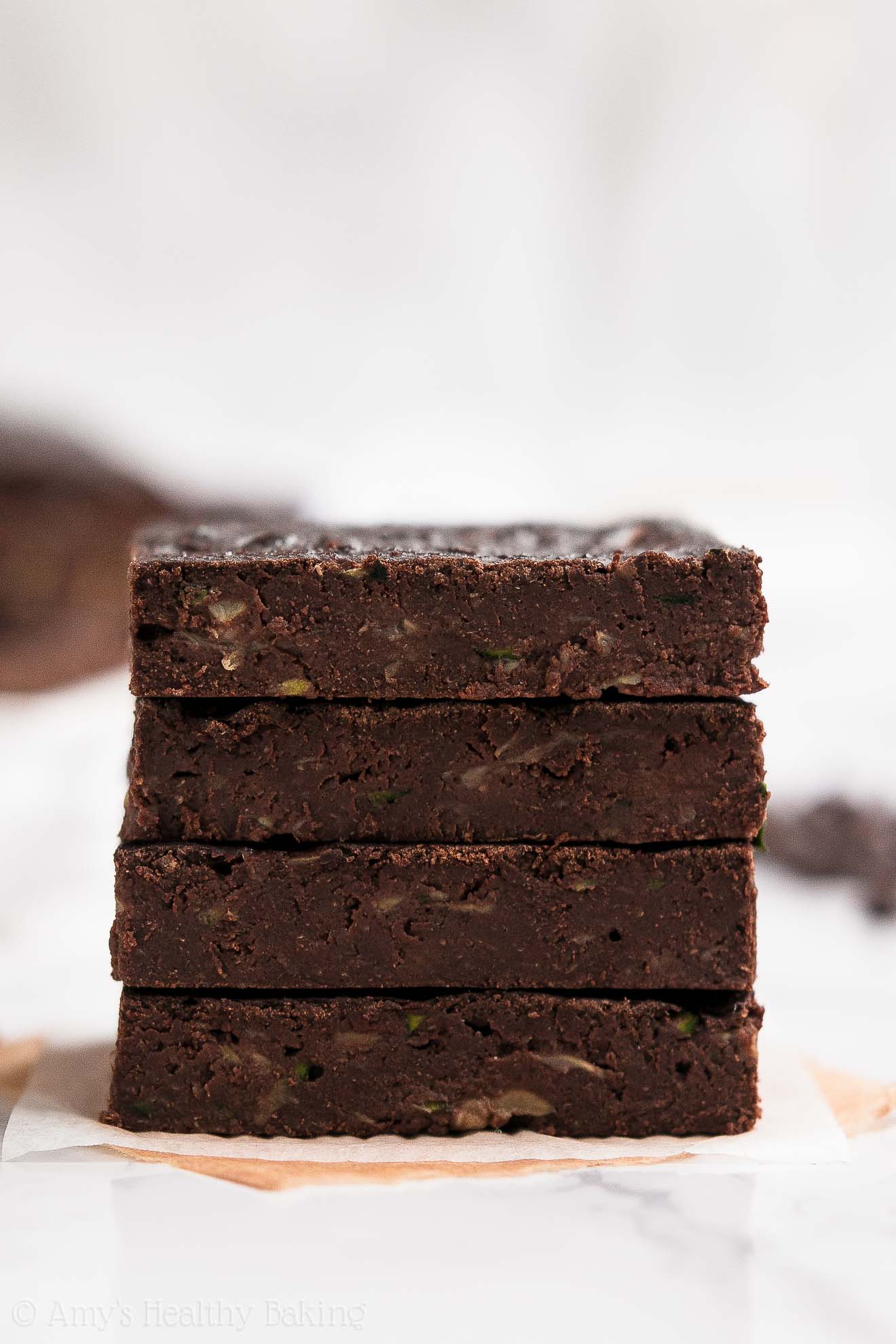 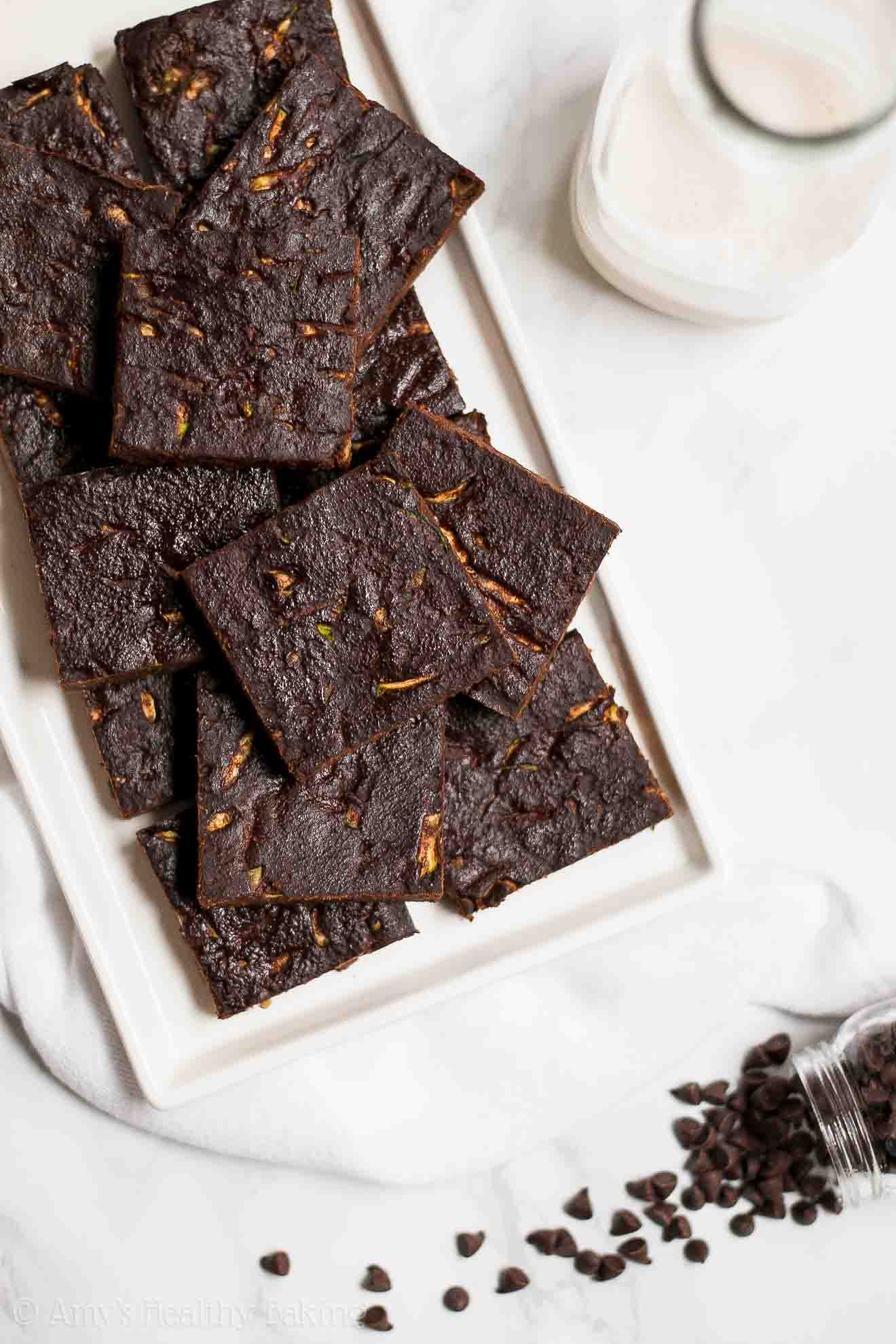 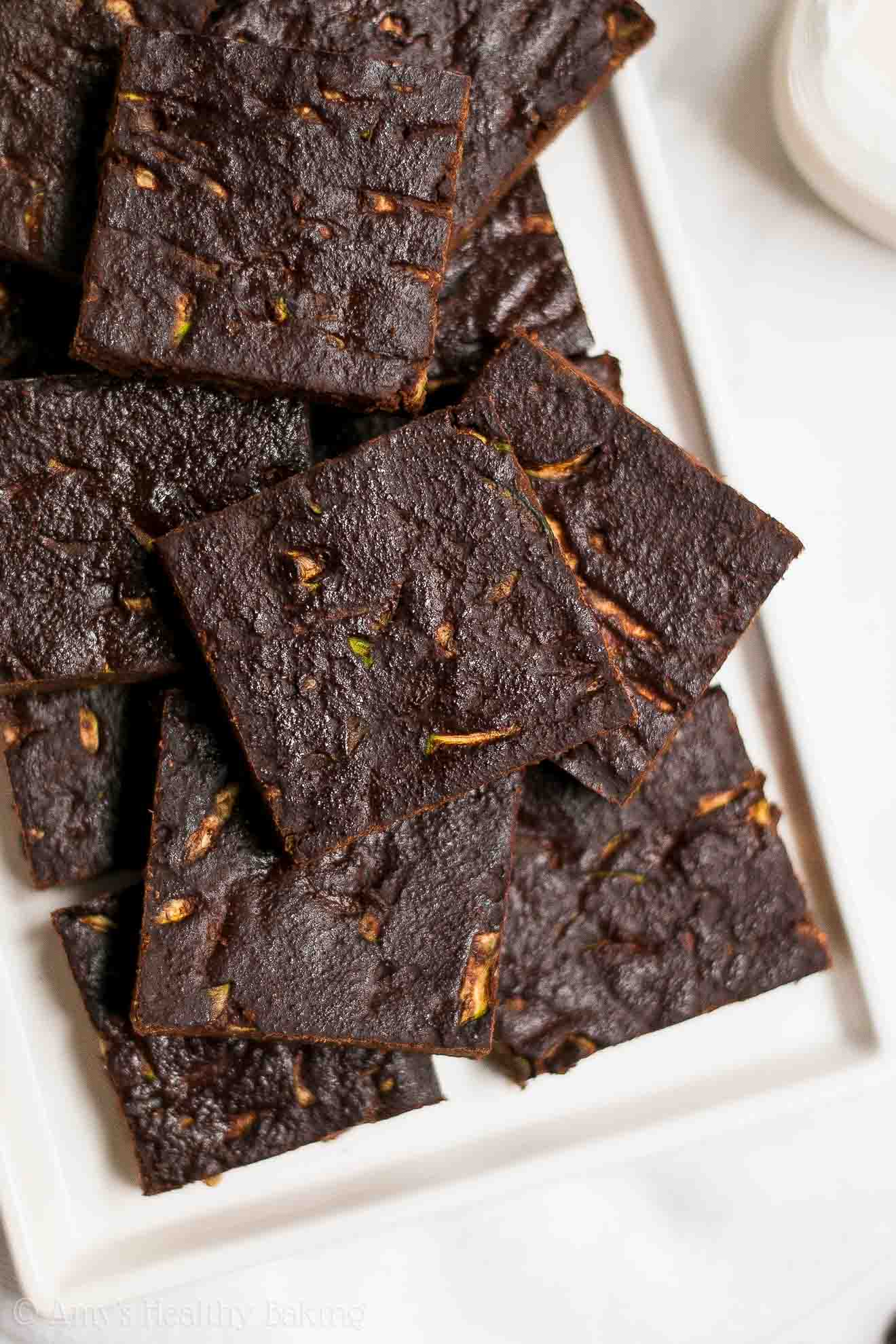 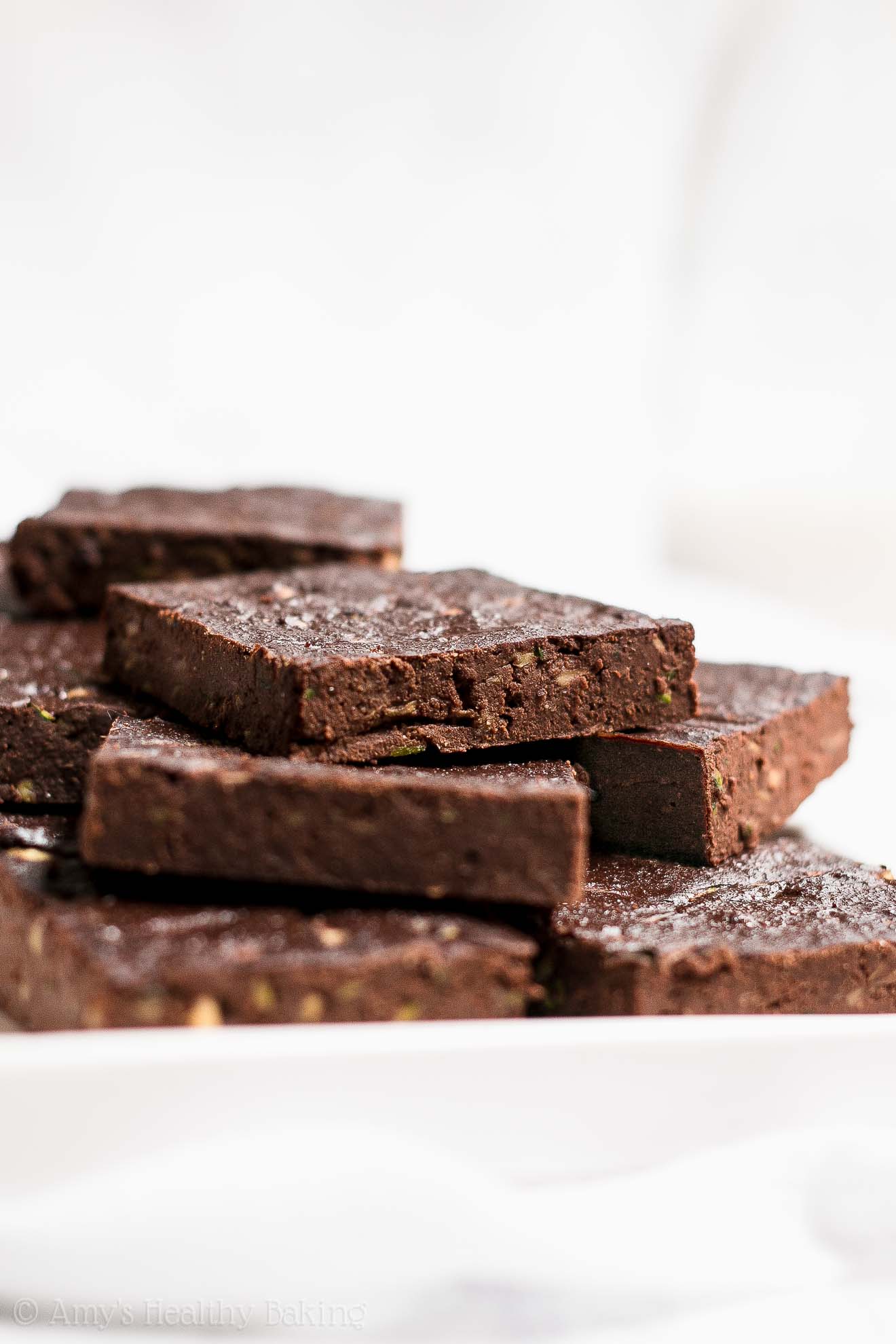 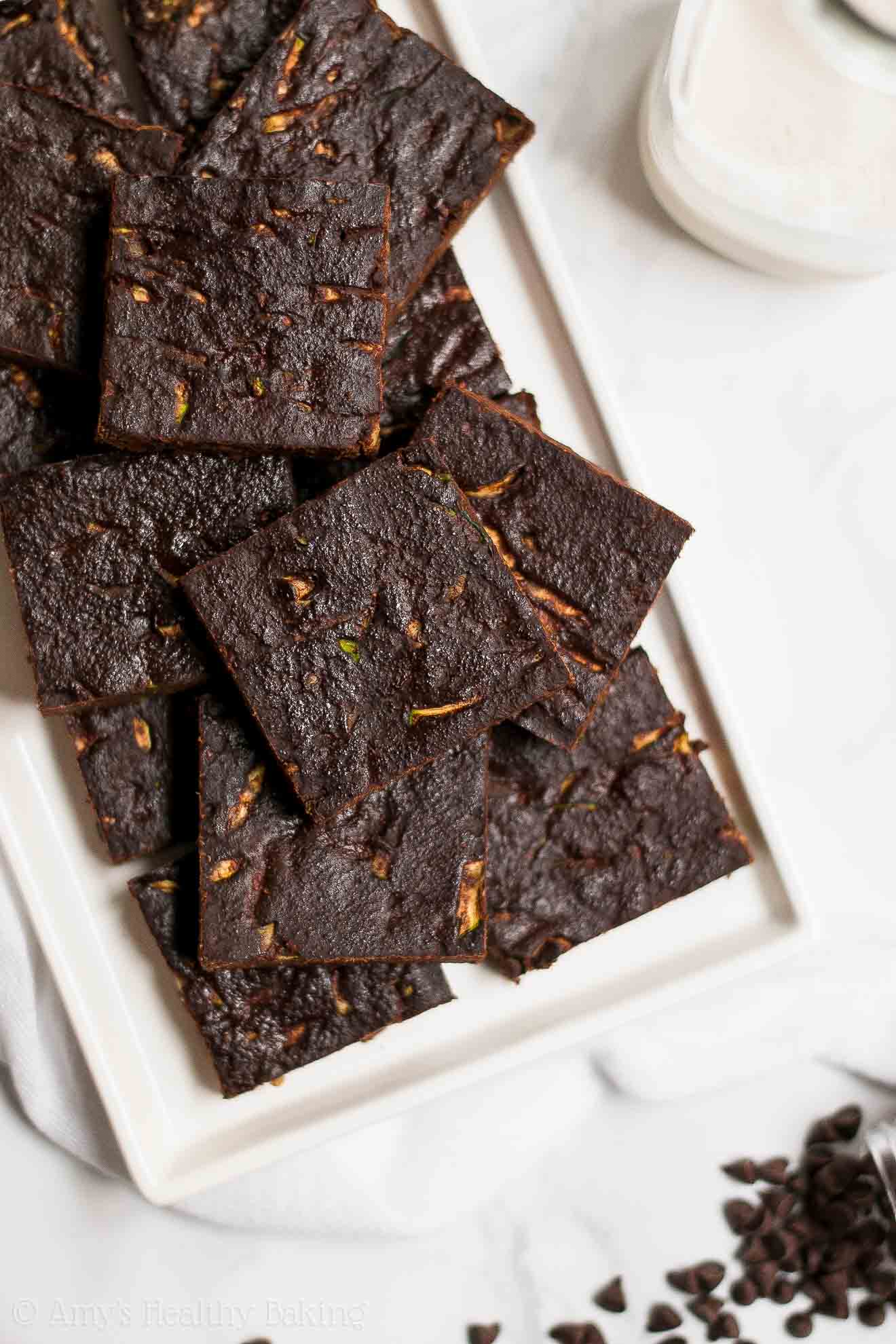 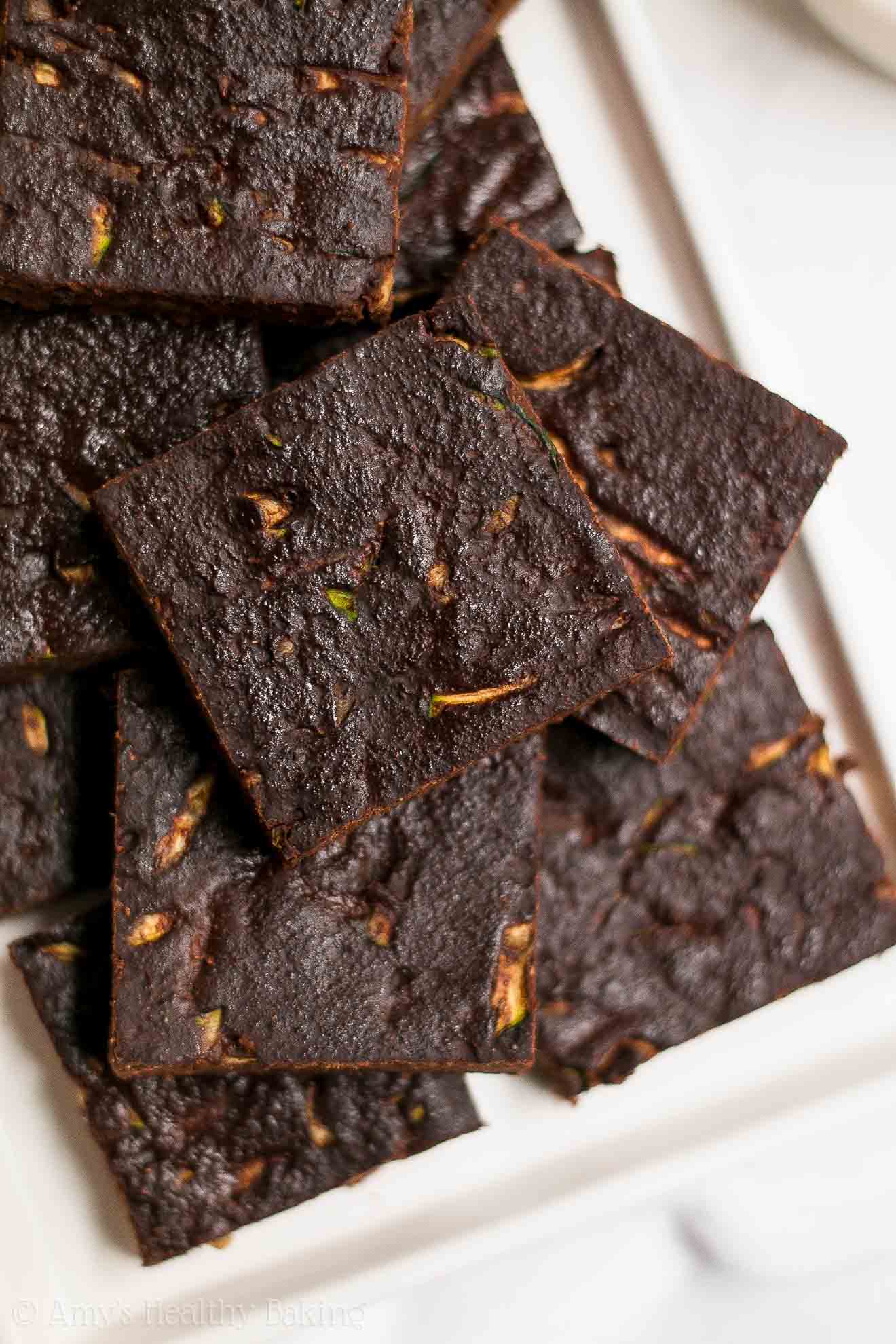 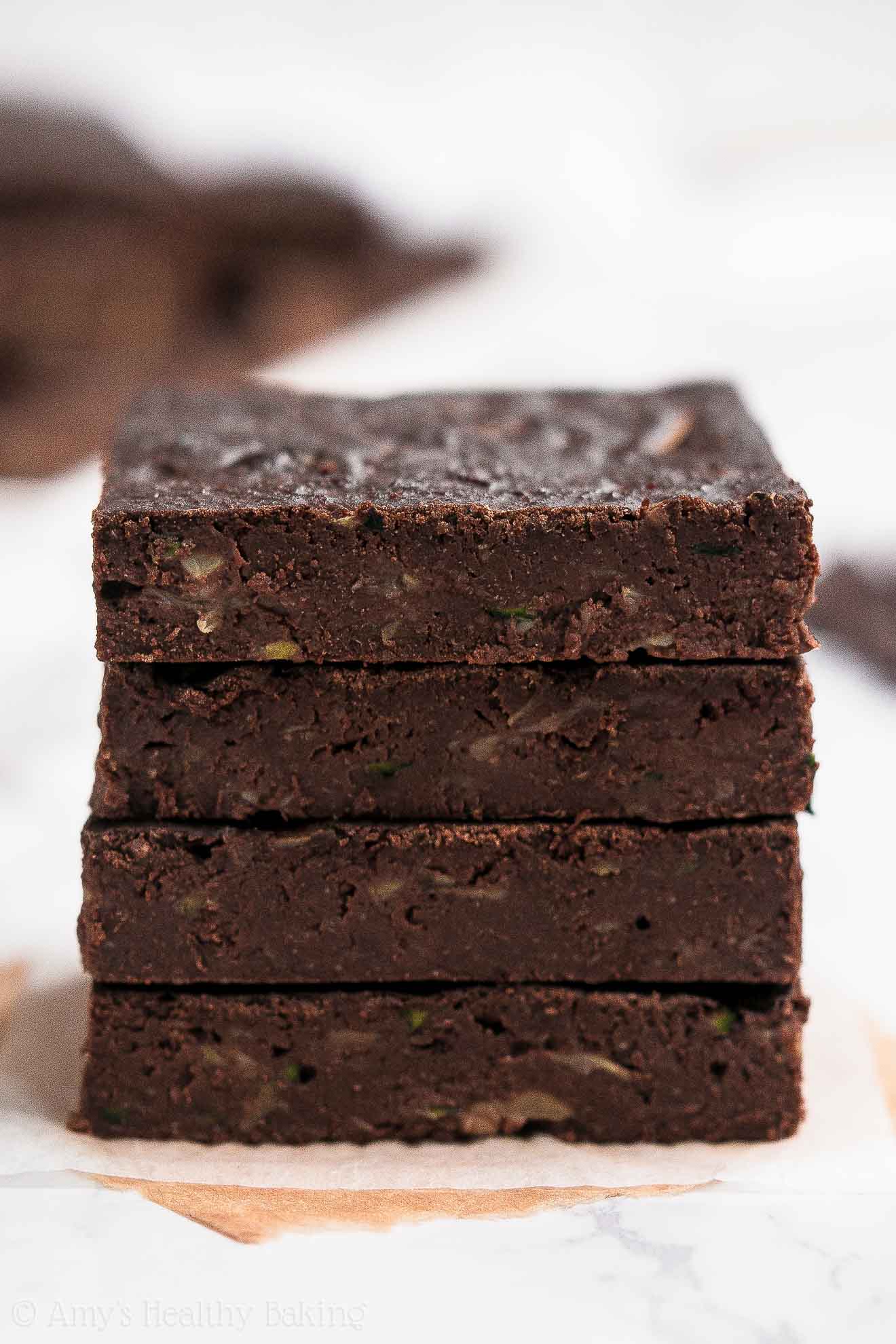 Seriously, how amazing do these look?? And when you make your own, remember to snap a picture and share it on Instagram using #amyshealthybaking and tagging @amyshealthybaking IN the photo itself! (That guarantees I’ll see your picture! ?) I’d love to see your healthy zucchini brownies!

Click here to PIN the recipe and save it for later!
Yields: 16 brownies
These brownies are such a great way to use the zucchini in your garden during the summer—or any time of year that you’re craving brownies! They’re really rich and fudgy, with lots of decadent flavor, and just a hint of coziness from cinnamon. Leftover brownies will keep for at least one week if stored in an airtight container in the refrigerator.
Notes: For the gluten-free flour, use as follows: ½ cup (60g) millet flour, 2 tablespoons (15g) brown rice flour, 2 tablespoons (15g) tapioca flour, and ½ teaspoon xanthan gum. Most store-bought gluten-free flour blends (like this one!) will work as well, if measured like this.

Measure the zucchini before patting it dry. You must pat it dry to remove the excess moisture because that excess moisture will cause the brownies to have too much liquid and turn out more on the cakey side, rather than fudgy. To pat the zucchini dry, lay a double-thick layer of paper towels onto a cutting board, and arrange the freshly shredded zucchini on top. Place another double-thick layer of paper towels on the zucchini, and firmly press down until the top towel turns completely wet.

You must wait 8+ hours before slicing and serving! If you cut into them while warm, they’ll taste cakey instead of crunchy, and the zucchini will be on the “al dente” side. The brownies turn fudgier the longer they rest on the counter, and the zucchini softens more as well. I promise it’s worth the wait!

The Healthier Chocolate Treats cookbook is perfect for any and all chocolate lovers. Whether you enjoy chocolate occasionally or every single day (that’d be me!), there are plenty of goodies inside for you! Healthier Chocolate Treats contains 50+ brand new healthier recipes. These recipes have never been seen before or appeared on my blog. You won’t find them anywhere else! And yes—every single one contains some form of chocolate. Whether you prefer milk, dark or white, there are lots of treats inside for you!     What Inspired You to Write Healthier Chocolate Treats? I have always loved chocolate. Every Halloween throughout my childhood, I inverted the entire contents of my bright … END_OF_DOCUMENT_TOKEN_TO_BE_REPLACED