JUMP TO RECIPE PRINT RECIPE
Learn how to make these supremely rich and fudgy brownies from scratch! They’re so simple to make, and you just need one bowl. These brownies literally taste like big squares of fudge, even with no butter, eggs, dairy, refined sugar or flour — and they’re 72 calories! 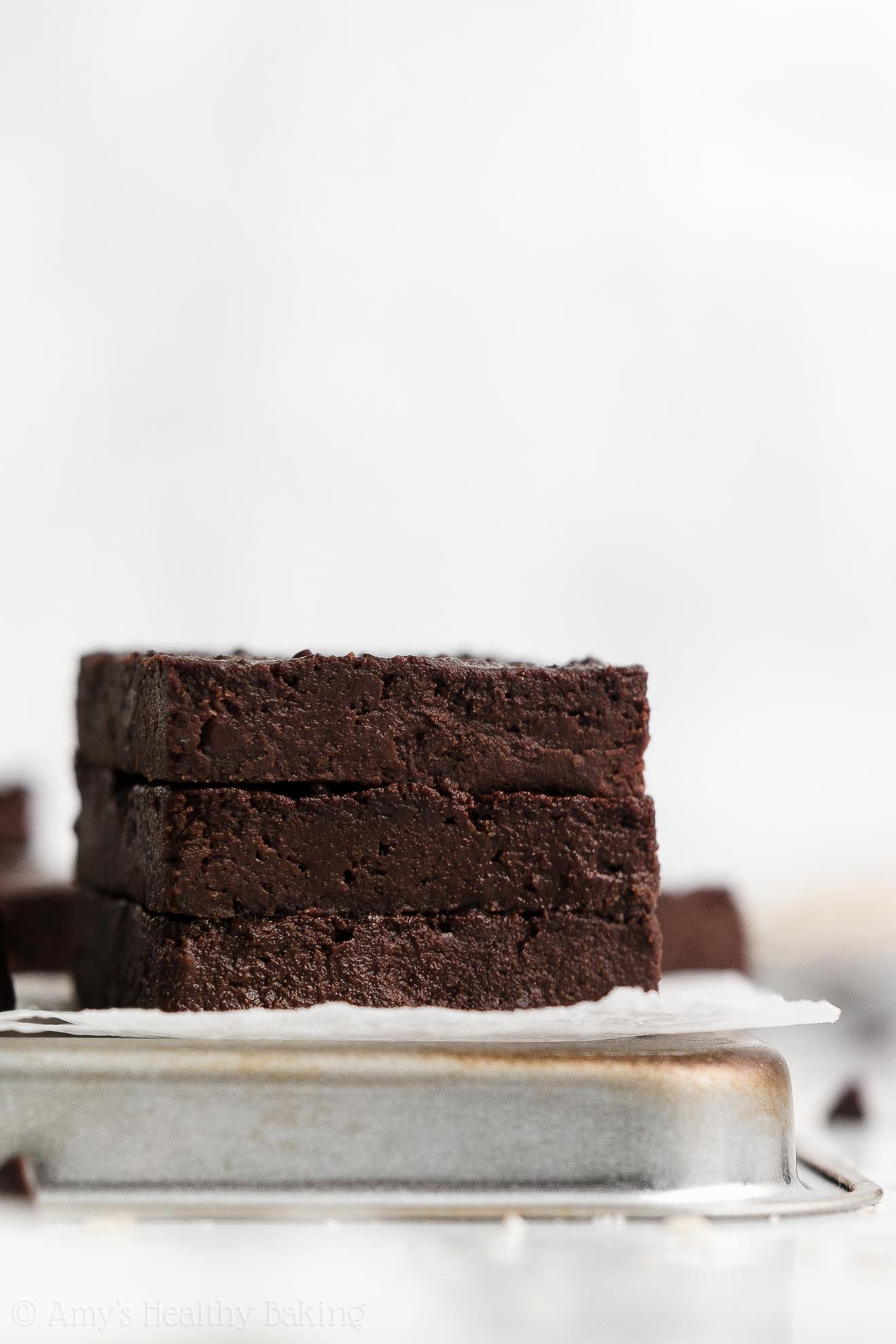 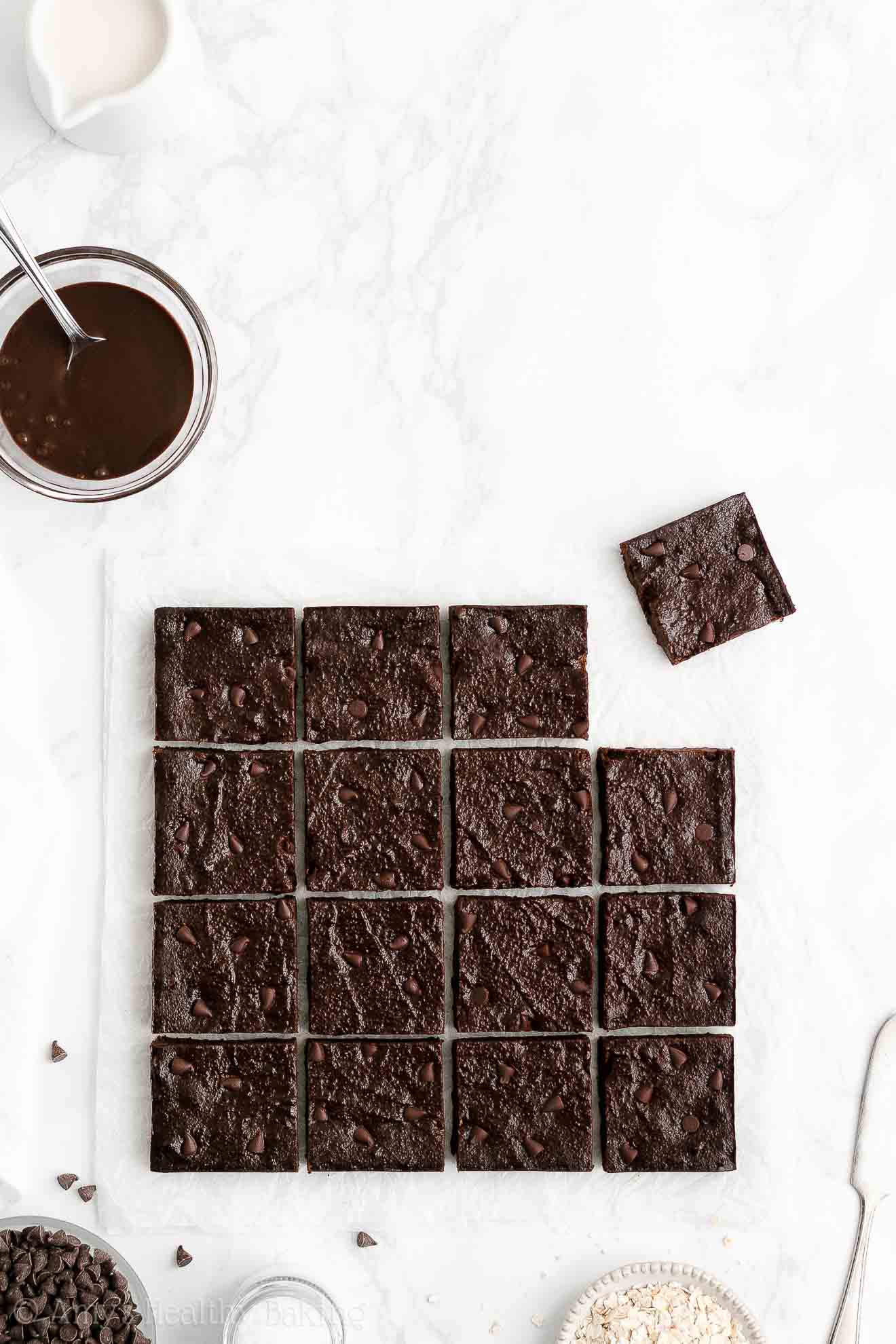 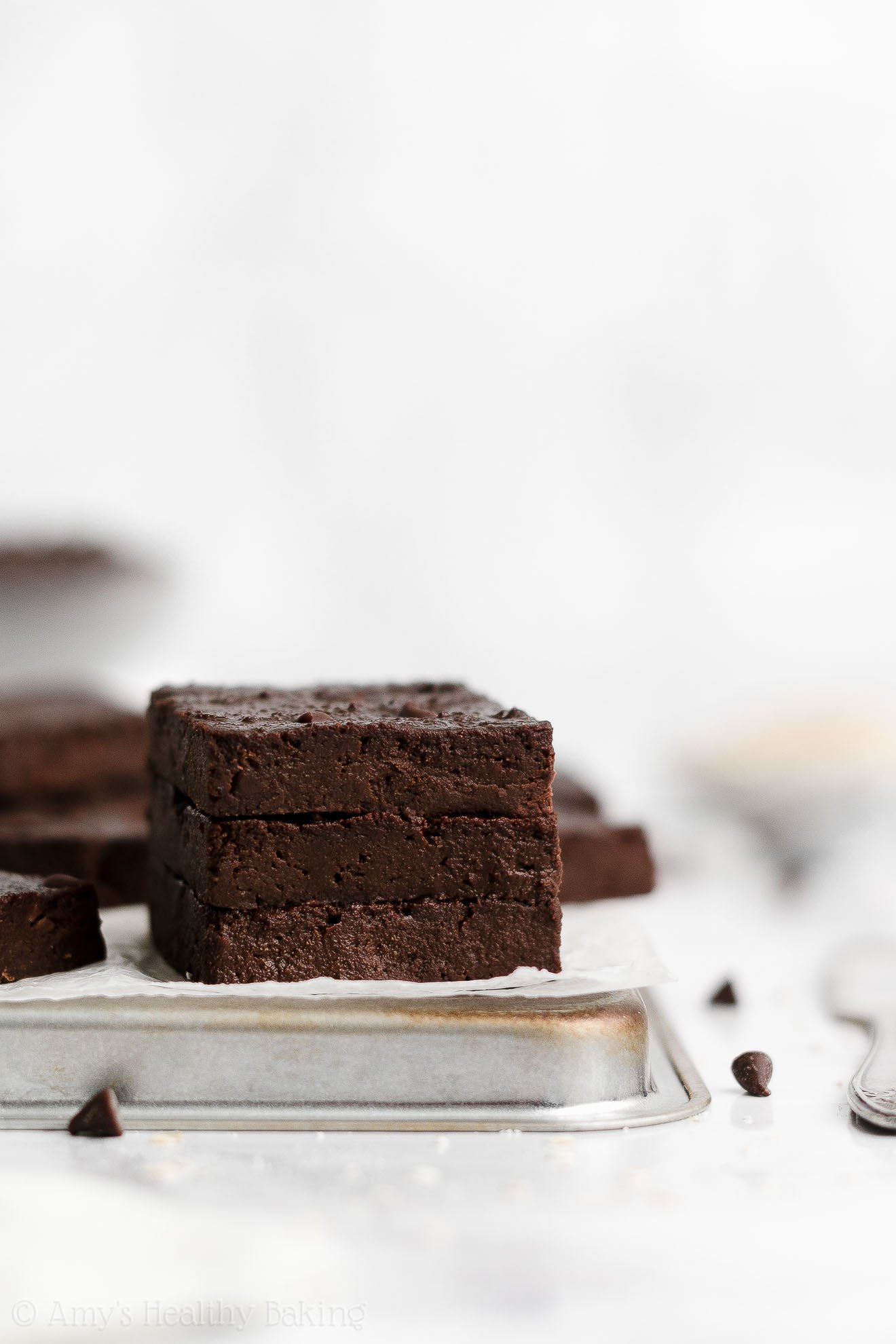 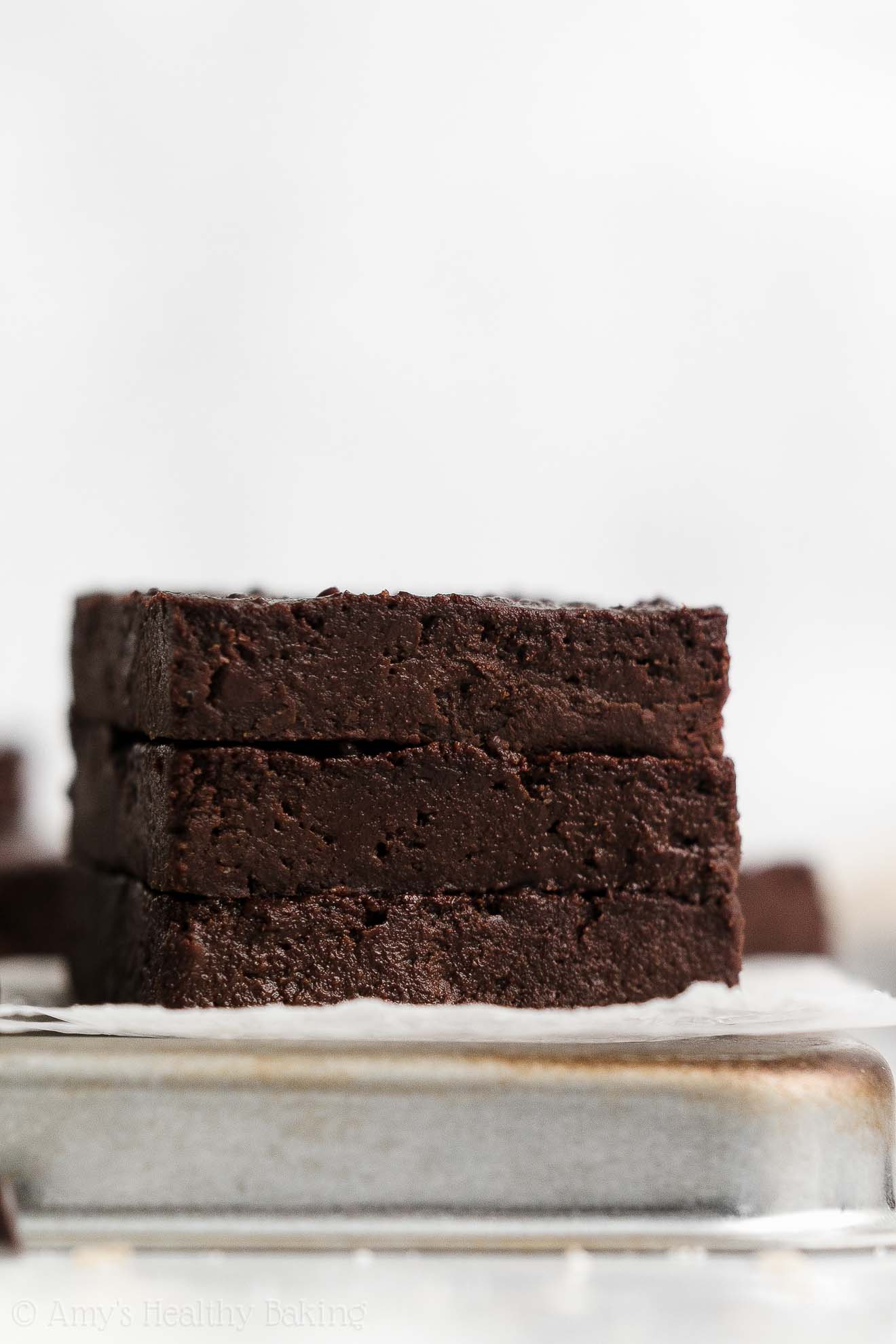 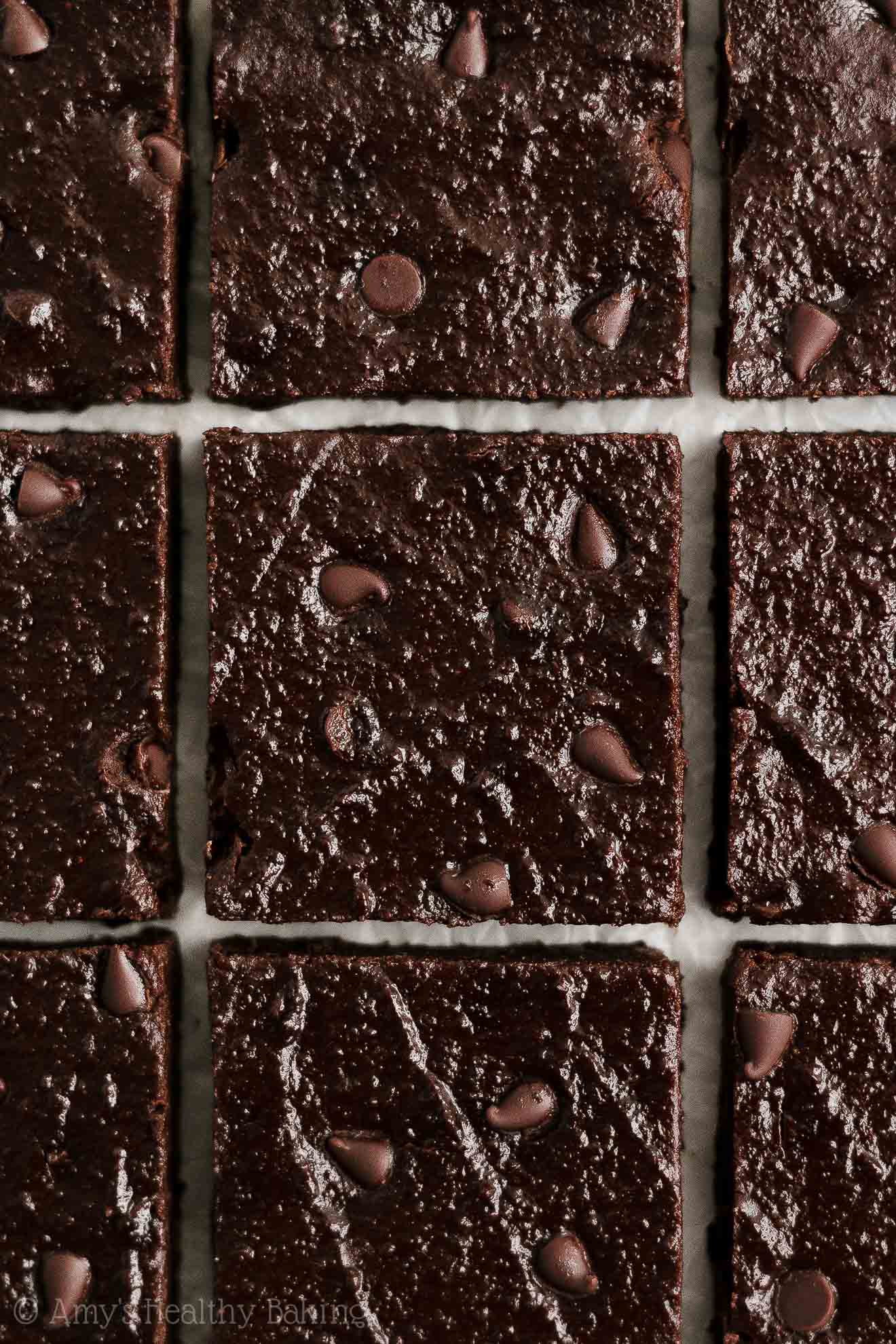 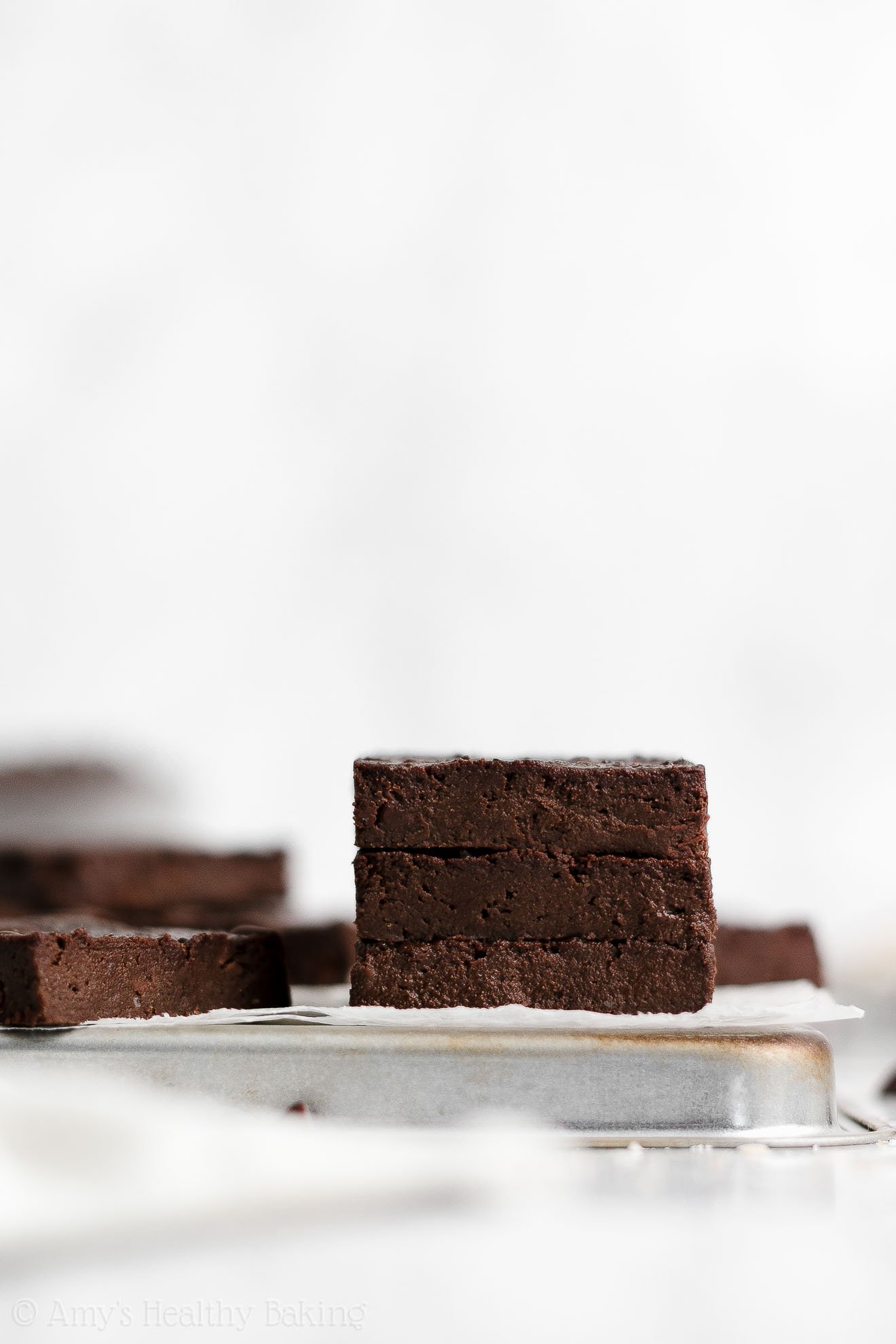 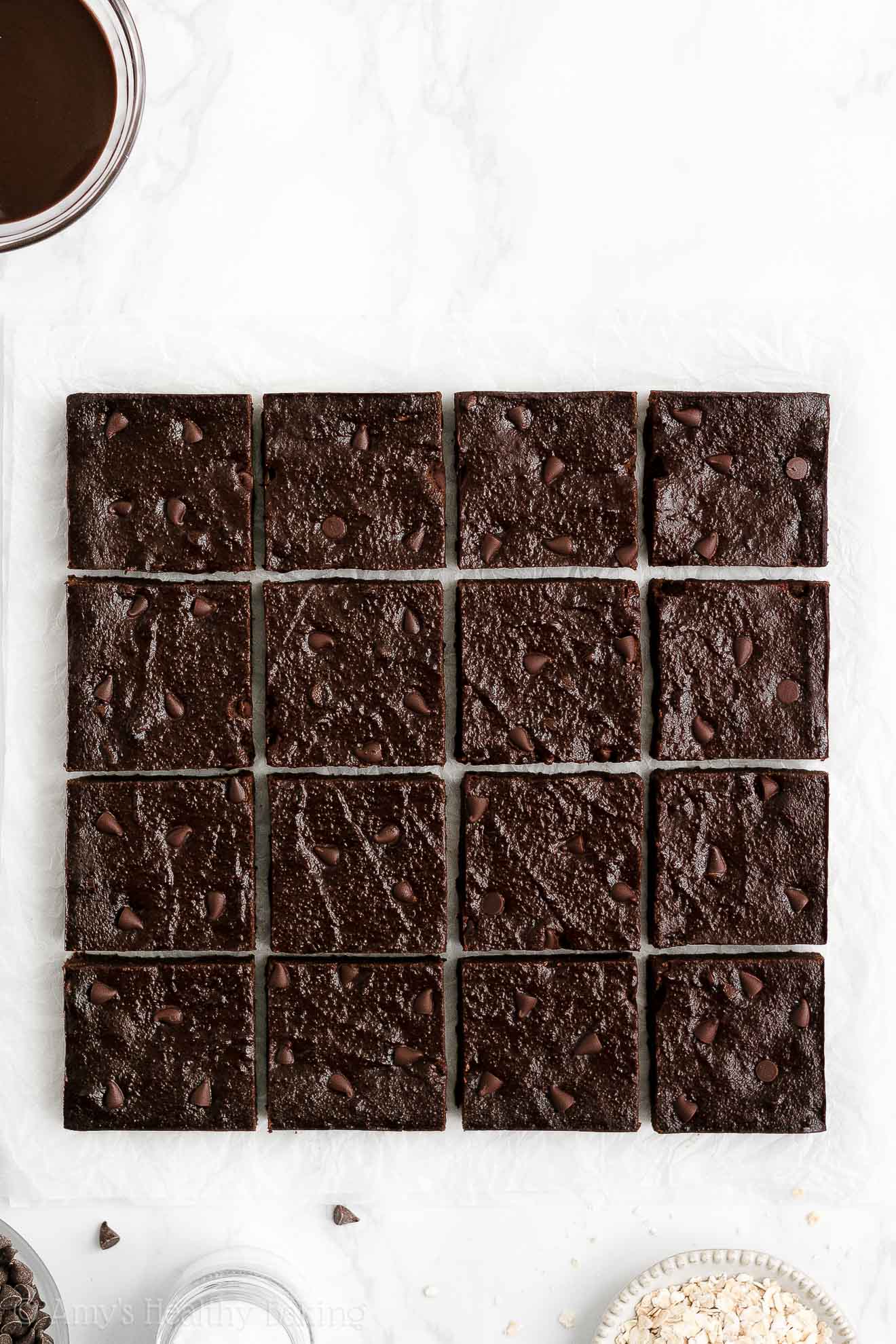 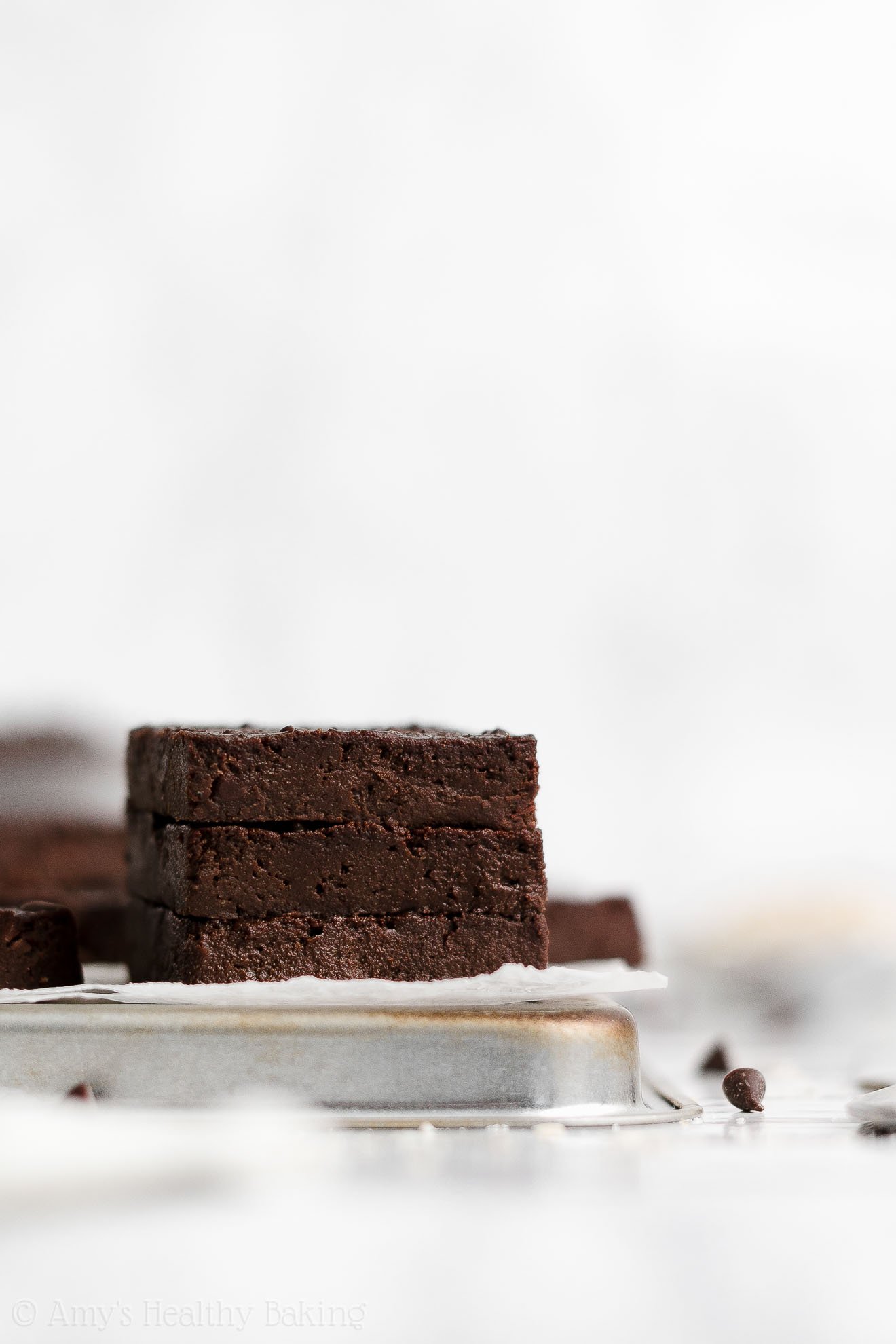 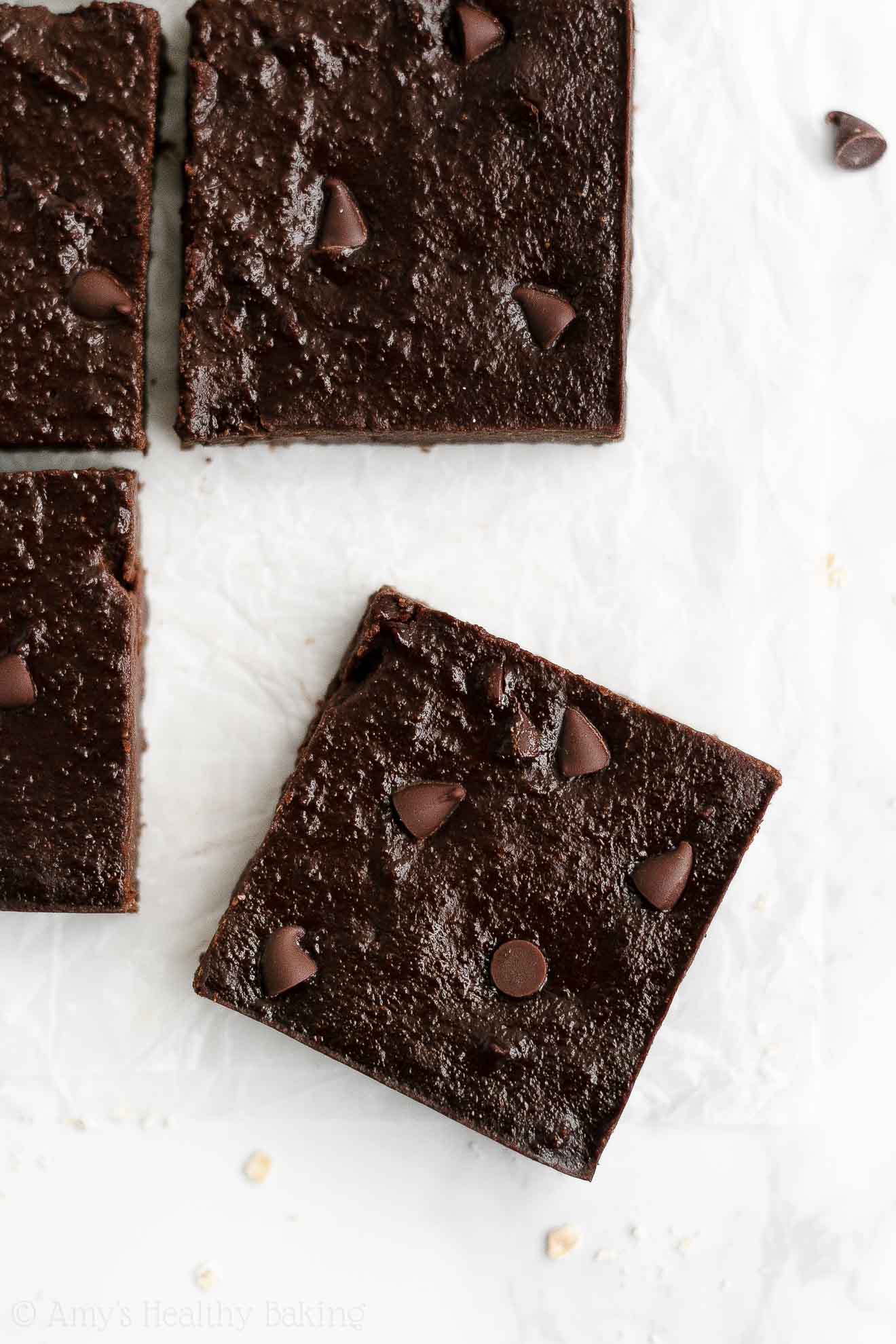 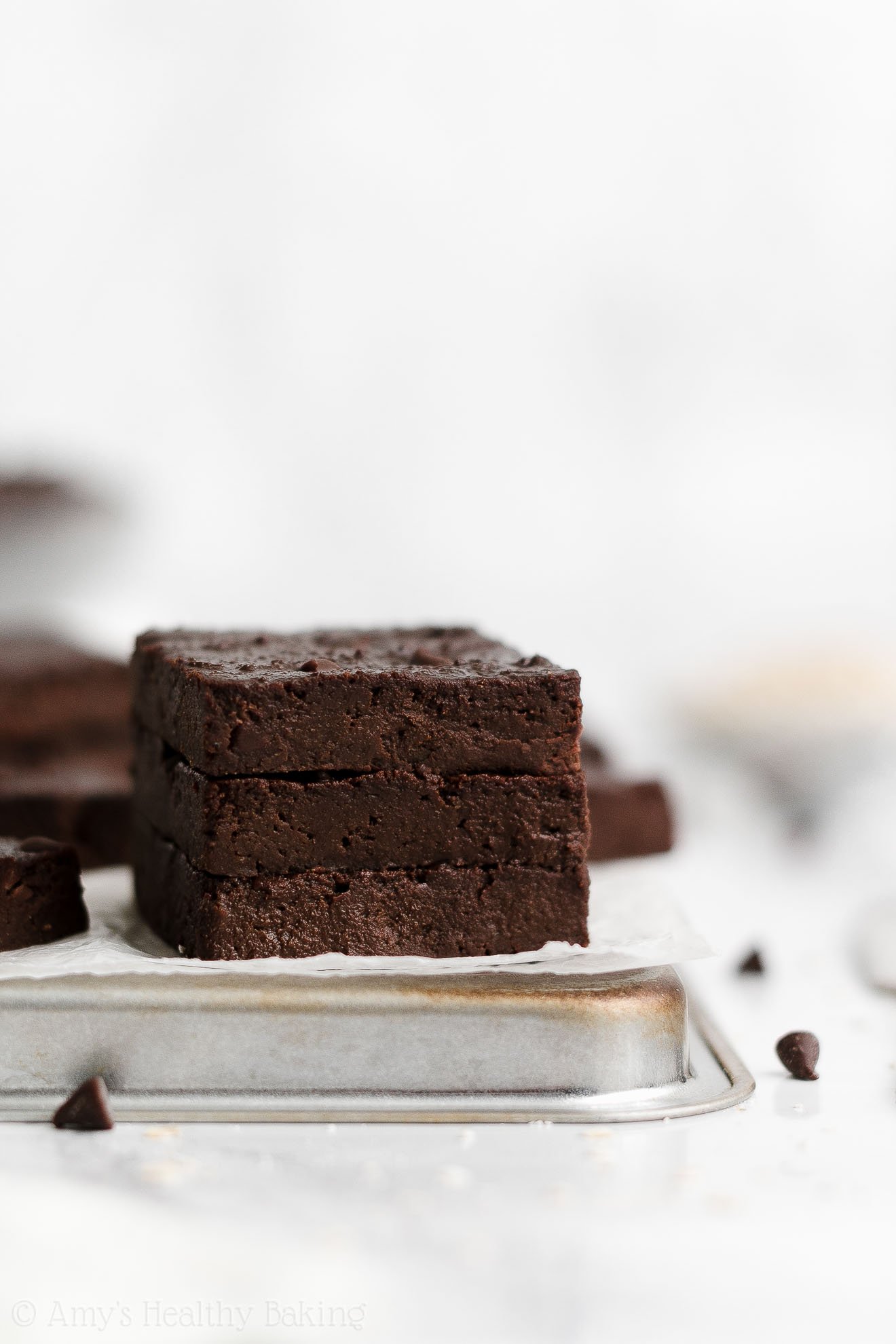 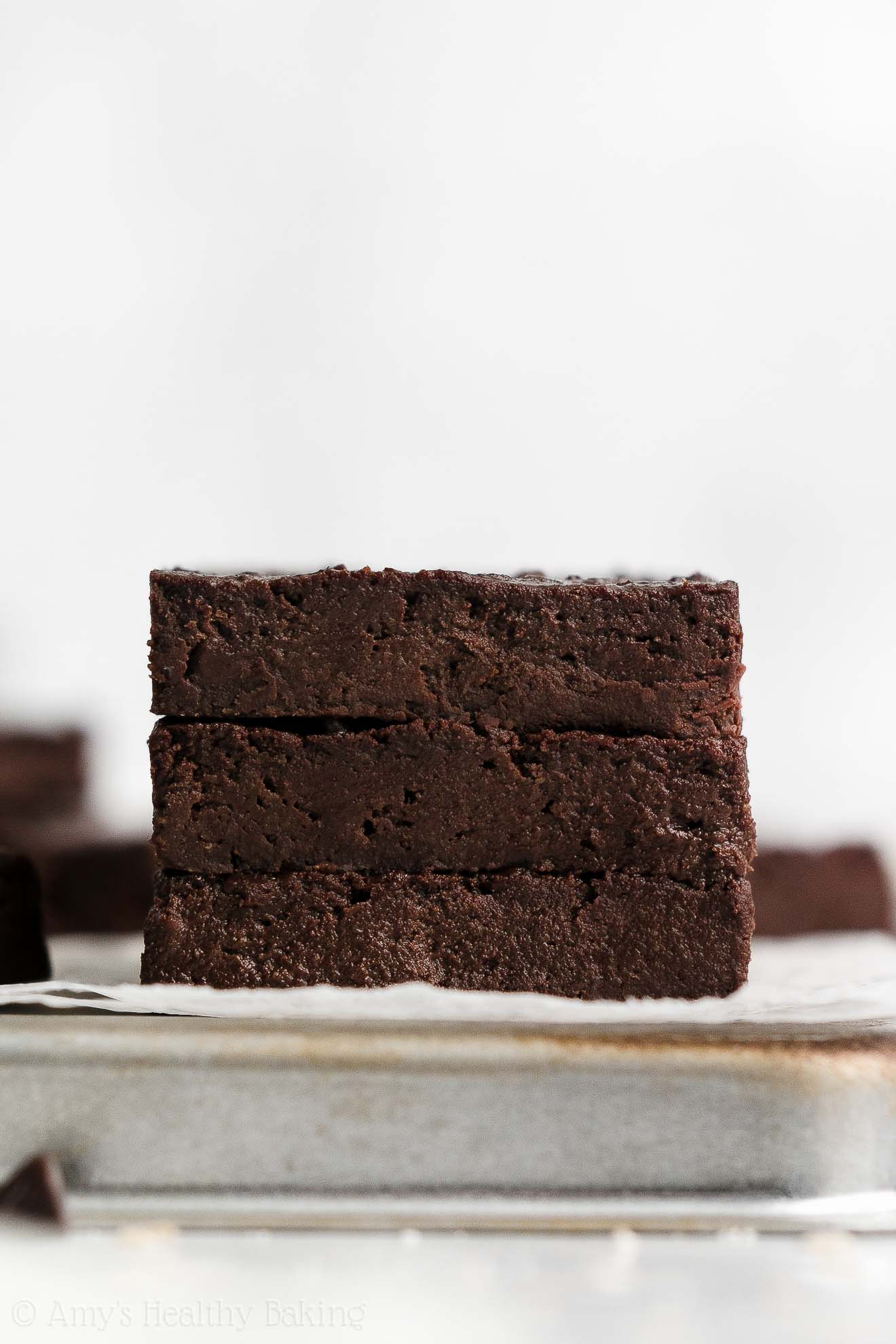 And if you’re anything like me… You just might reach for a second! 😉 And when you make your own, remember to snap a picture and share it on Instagram using #amyshealthybaking and tagging @amyshealthybaking IN the photo itself! (That guarantees I’ll see your picture! 🙂 ) I’d love to see your healthy fudgy flourless vegan chocolate chip brownies! 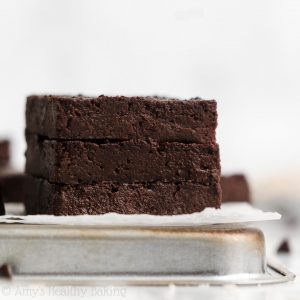 © Amy's Healthy Baking
Yields: 16 brownies
These brownies are absolutely incredible! They’re incredibly rich, similar to 72% dark chocolate, and they literally taste like giant squares of fudge. These brownies are so quick and easy to make too! Leftovers will keep for at least 5 days if stored in an airtight container in the refrigerator (if not longer!), and they freeze really well too!
4.74 from 15 votes
Print Recipe Pin Recipe

This is my favorite store-bought oat flour (or this for a gluten-free version!). I also show you how to make your own here.   Remember to measure the flour and cocoa powder correctly, using this method or a kitchen scale. (← That’s the one I own and love!) Too much oat flour and cocoa powder in the brownie batter will make your brownies dry and crumbly, rather than chewy and fudgy. Too much cocoa powder will also make your brownies taste bitter, rather than rich and chocolaty.   White whole wheat flour, whole wheat pastry flour, regular whole wheat flour, and all-purpose flour can all be substituted for the oat flour.   For a non-oat-flour gluten-free option, I recommend the following: ½ cup (60g) millet flour, 2 tablespoons (15g) tapioca flour, 2 tablespoons (15g) brown rice flour, and ¼ teaspoon xanthan gum. Many store-bought gluten-free flour blends (like this!) will also work, if measured like this.   I do not recommend substituting Dutched or special dark cocoa powder for the regular unsweetened cocoa powder (this kind). Both Dutched and special dark cocoa powder have a different acidity level, which can affect the taste and texture of your brownies.   Any oil may be substituted for the olive oil. (If using coconut oil, make sure to melt it first!) Regular butter and vegan butter that have been melted will also work.   To make life as easy as possible for you, I designed this recipe to use exactly one single-serving sized container of unsweetened applesauce (like this!). That’s why the tablespoon + teaspoon measurement is so weird! If you only have sweetened applesauce, that will also work.   Brown sugar may be substituted for the coconut sugar.   Any milk may be substituted for the unsweetened vanilla almond milk.   These are my favorite vegan miniature chocolate chips!   The brownies are ready to come out of the oven when the edges look firm but the center still looks glossy and underdone! The heat from the pan continues to cook the center while they cool. If the edges of the brownies pull away from the edges of your baking pan within 10 minutes of pulling them out of the oven, then you’ve baked them for long enough!   If you’re too impatient to wait for 8 hours once your brownies are at room temperature, then you can stick the pan in the refrigerator for 1-2 hours once they’ve reached room temperature to speed up the process!   {gluten-free, vegan, dairy-free, egg-free, clean eating, low fat}
DID YOU MAKE THIS RECIPE?I'd love to hear what you think of it in a comment below! If you take a picture, tag @amyshealthybaking on Instagram or use the hashtag #amyshealthybaking.

The Healthier Chocolate Treats cookbook is perfect for any and all chocolate lovers. Whether you enjoy chocolate occasionally or every single day (that’d be me!), there are plenty of goodies inside for you! Healthier Chocolate Treats contains 50+ brand new healthier recipes. These recipes have never been seen before or appeared on my blog. You won’t find them anywhere else! And yes—every single one contains some form of chocolate. Whether you prefer milk, dark or white, there are lots of treats inside for you!     What Inspired You to Write Healthier Chocolate Treats? I have always loved chocolate. Every Halloween throughout my childhood, I inverted the entire contents of my bright orange jack-o-lantern bucket … END_OF_DOCUMENT_TOKEN_TO_BE_REPLACED