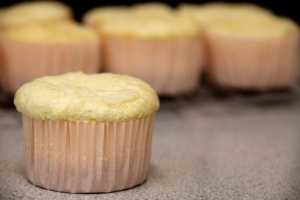 Betcha can’t make your cupcake rise half an inch away from the wrapper! Yes folks, that’s right, these cupcakes are quite literally floating on air. It’s no optical illusion; you can tell by the little dark stripe around the base of the pink paper liner. How’d I do it?

It defies physics. I carefully beat the egg whites, but just with a regular ol’ hand-held electric mixer. I very gently folded in the flour so that the batter didn’t deflate, but I still had to scoop out portions to fill the muffin cups. And I even opened the oven door to take a sneak peak, which should have made them sink even more!

So there you have it. Life’s newest little mystery. Magical levitating cupcakes… Can you bake a batch yourself? 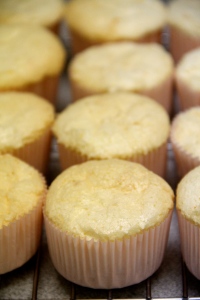 The cupcakes tasted delicious plain, but they’d be scrumptious with a simple glaze or a light and fluffy frosting. Substitute lemon zest for the orange if you prefer. Any citrus, really, would do!

« The Sunshine in My Kitchen
Have a Heart: The Vegan Challenge »

The Healthier Chocolate Treats cookbook is perfect for any and all chocolate lovers. Whether you enjoy chocolate occasionally or every single day (that’d be me!), there are plenty of goodies inside for you! Healthier Chocolate Treats contains 50+ brand new healthier recipes. These recipes have never been seen before or appeared on my blog. You won’t find them anywhere else! And yes—every single one contains some form of chocolate. Whether you prefer milk, dark or white, there are lots of treats inside for you!     What Inspired You to Write Healthier Chocolate Treats? I have always loved chocolate. Every Halloween throughout my childhood, I inverted the entire contents of my bright … END_OF_DOCUMENT_TOKEN_TO_BE_REPLACED