I first shared this recipe years ago, but these are still my absolute FAVORITE classic cinnamon rolls! So I’ve updated the photos and included even more nerdy tips and tricks to make sure you end up with the best ever, absolutely perfect cinnamon rolls. They’re fluffy, moist, have a sweet and irresistible cinnamon filling… Yet they contain no eggs, refined flour or sugar (and have a dairy-free option!), and they’re 112 calories! 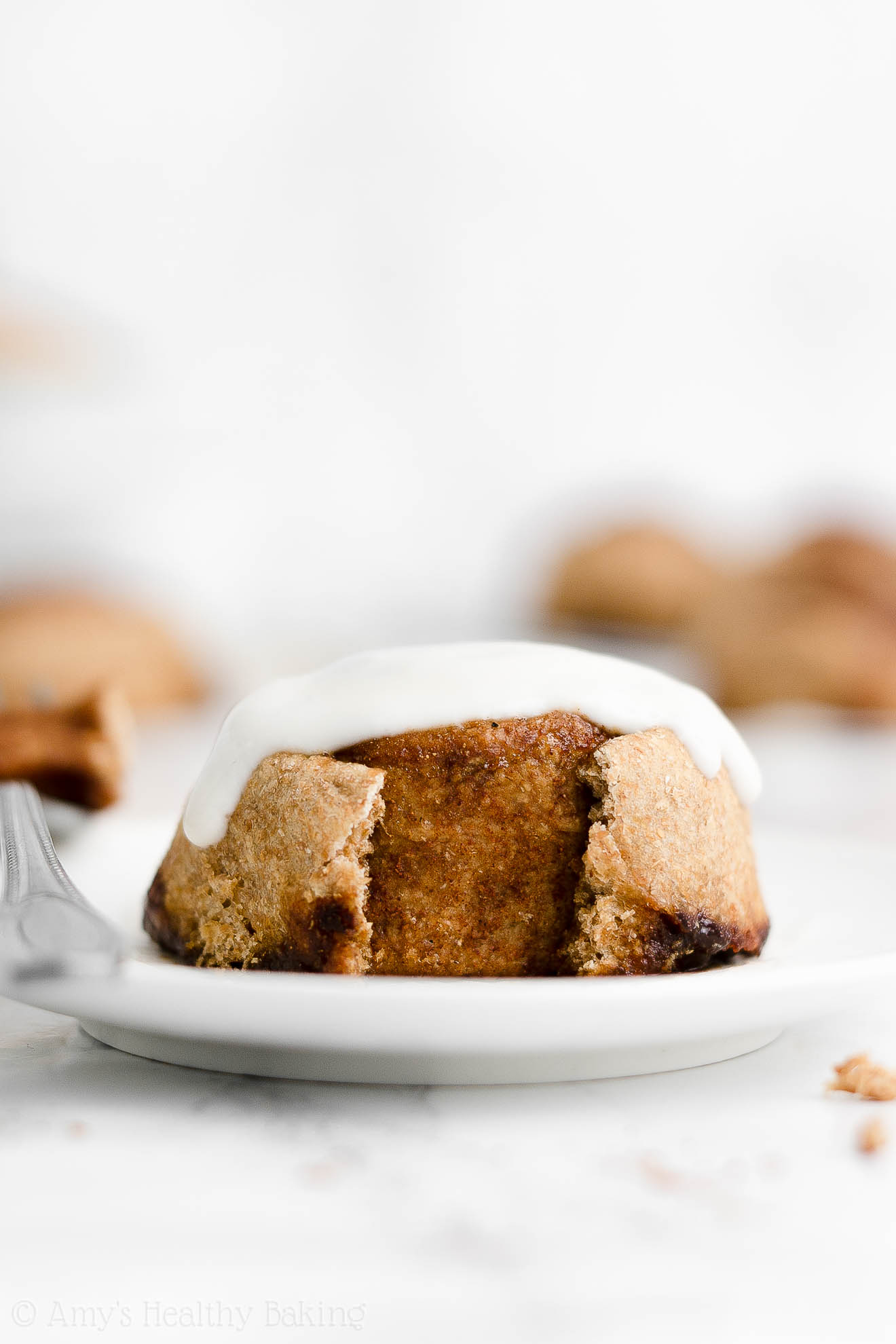 Throughout our childhood, my brother and I usually ate cold cereal for breakfast before school during the week. Life, Corn Flakes, Cheerios, Raisin Bran, Rice Krispies, Fruity Pebbles, occasionally Lucky Charms… We weren’t too picky!

On the weekends, Mom sometimes prepared something special for us while we watched Blue’s Clues and Gullah Gullah Island. She often picked pancakes, made completely from scratch and dolloped into the pan in the shape of Mickey Mouse silhouettes, since they were so quick and easy.

Yet every once in a while, she baked a batch of cinnamon rolls. Those came from a can, not from scratch, but my brother and I didn’t mind one bit. We loved cracking open the tube by thwacking it against the counter and helping arrange the dough into the cake pan! And when the oven timer buzzed…

We eagerly dashed into the kitchen, excitedly watching Mom pour the thick glaze over the tops before we reached for the cinnamon rolls with the most icing. Within just a few minutes, every crumb, drip, and drizzle had disappeared from the pan… And we were licking our fingers to hide the evidence!

As I grew up, I realized that not all cinnamon rolls came from a can… And as I started baking more, I discovered how much I love making them from scratch — and how it’s entirely possible to make healthy cinnamon rolls that actually taste amazing! 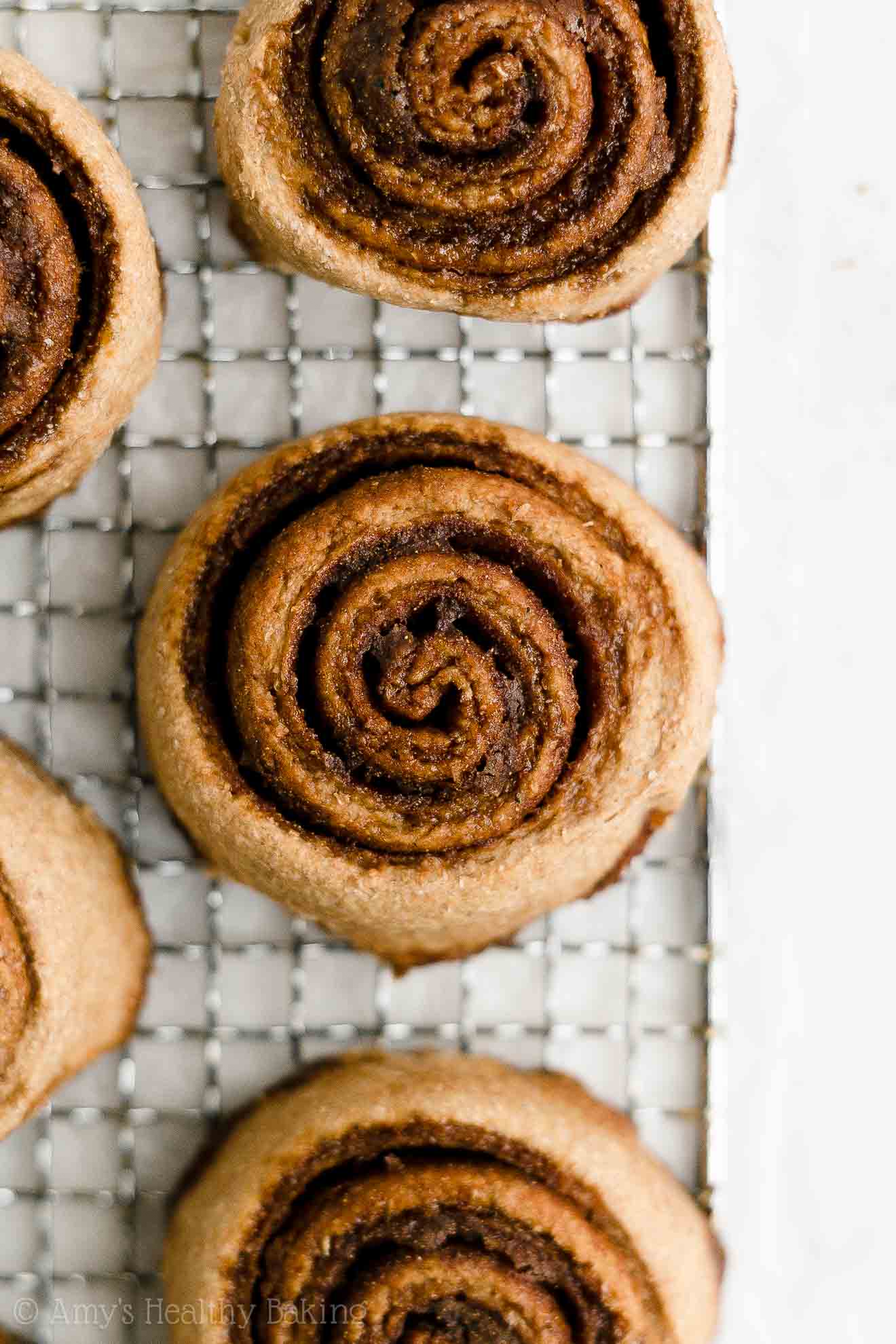 So after lots of testing and practice, I’m incredibly excited to reshare this recipe for the Ultimate Healthy Cinnamon Rolls with you! They’re fluffy and moist, exactly the way cinnamon rolls should be, with mesmerizing spirals of irresistible sweet and gooey cinnamon filling.

Yet unlike traditional recipes… This healthy cinnamon roll recipe contains no eggs, refined flour or sugar (along with a dairy-free option!) — and 112 calories in each one!

You can find my updated recipe for the Ultimate Healthy Cinnamon Rolls here! (Along with a step-by-step video and lots of tips!)

The Healthier Chocolate Treats cookbook is perfect for any and all chocolate lovers. Whether you enjoy chocolate occasionally or every single day (that’d be me!), there are plenty of goodies inside for you! Healthier Chocolate Treats contains 50+ brand new healthier recipes. These recipes have never been seen before or appeared on my blog. You won’t find them anywhere else! And yes—every single one contains some form of chocolate. Whether you prefer milk, dark or white, there are lots of treats inside for you!     What Inspired You to Write Healthier Chocolate Treats? I have always loved chocolate. Every Halloween throughout my childhood, I inverted the entire contents of my bright orange jack-o-lantern bucket … END_OF_DOCUMENT_TOKEN_TO_BE_REPLACED