The BEST sweet, tender & gooey cinnamon rolls made from scratch! Completely guilt-free with only 112 calories and no refined flour or sugar!
Click here to PIN the recipe and save it for later! 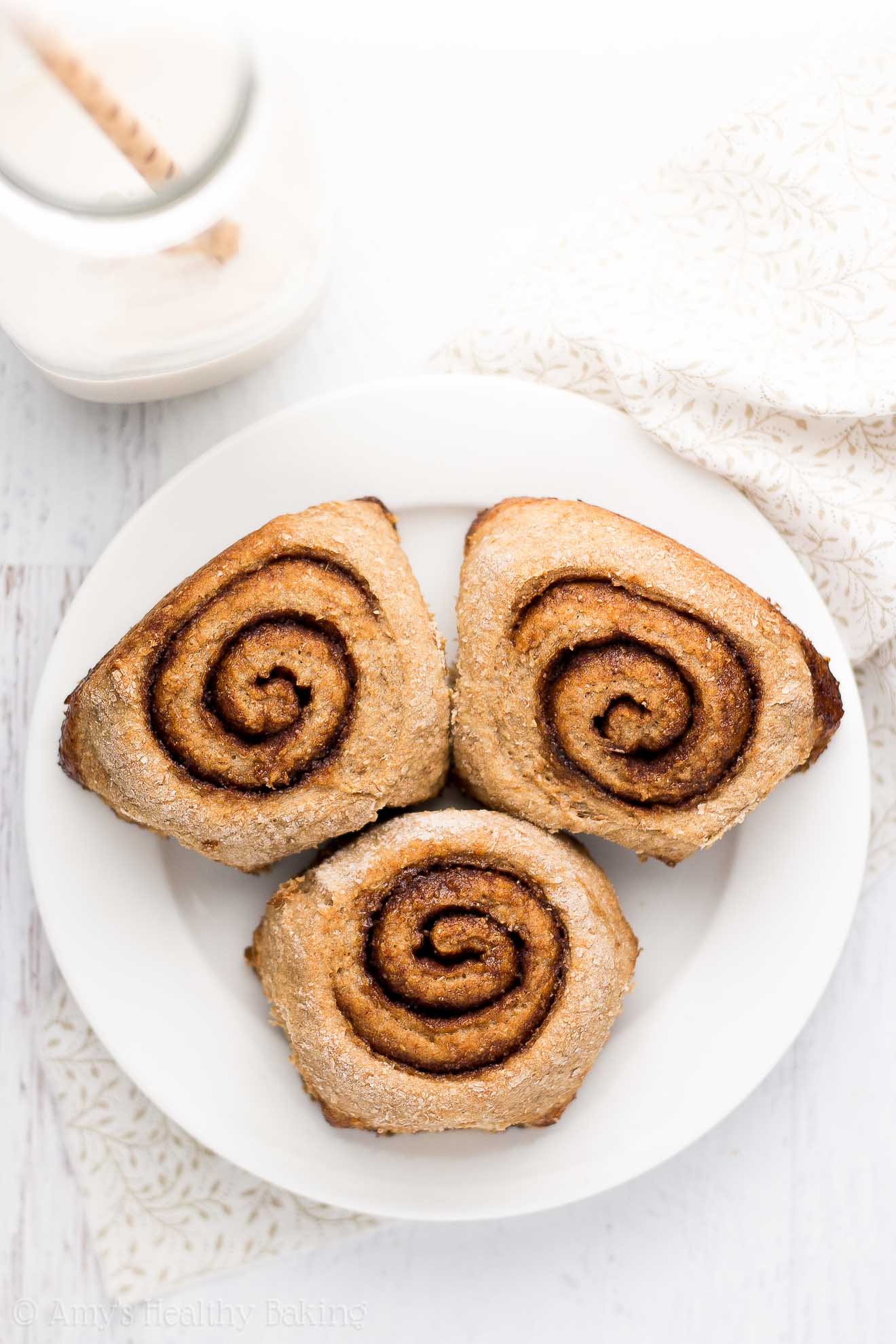 Partway through the school year in 8th grade, my best friend moved to Australia because of her father’s job. A few months later as a surprise, my parents bought me a round-trip ticket to visit her, so I boarded a plane on the first day of Spring Break.

When the flight landed 14 hours later, my best friend and her mom stood waiting at the baggage claim with a bunch of brightly colored helium balloons. After plenty of hugs, we loaded my suitcase into their car, and her mom drove us around Sydney, pointing out their favorite shops and restaurants. 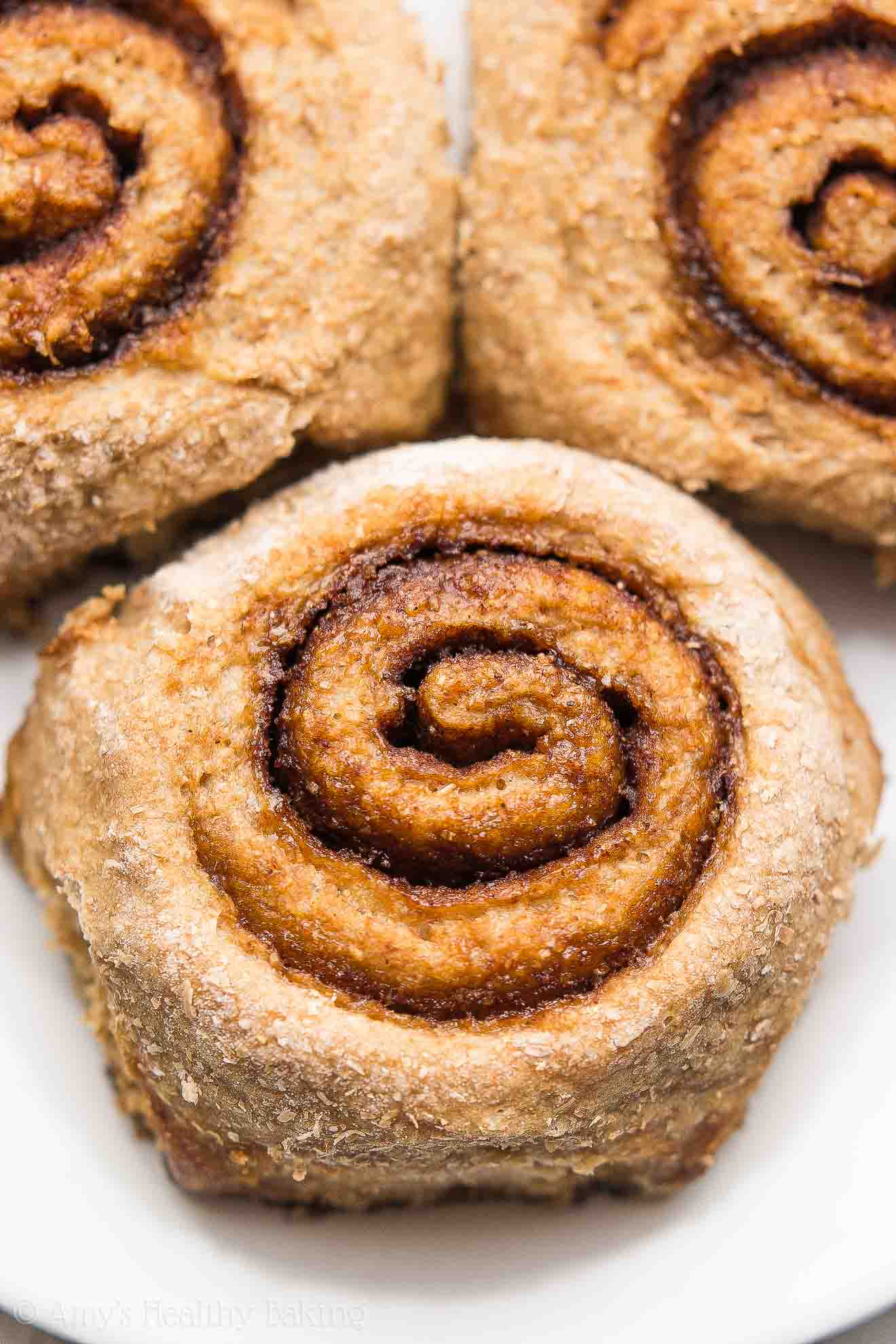 Upon arriving at their house, her mom put us to work making homemade cinnamon rolls—mainly to make sure I didn’t take a nap and would quickly adjust to the time change! We mixed up the dough, adding plenty of butter like the recipe called for, and after kneading and letting it rest, we rolled it out in a rectangle, brushed it with even more butter, and sprinkled the filling on top.

As an overnight recipe, we popped the pan of cinnamon rolls into the refrigerator that evening, and we preheated the oven as soon as we woke up the following morning. Once the timer rang, we eagerly waited next to the counter, waiting just barely long enough to avoid burning our fingers and tongues on the hot, gooey treats. With how incredible they smelled—and they tasted even better!—we completely forgot to make any icing to drizzle on top! 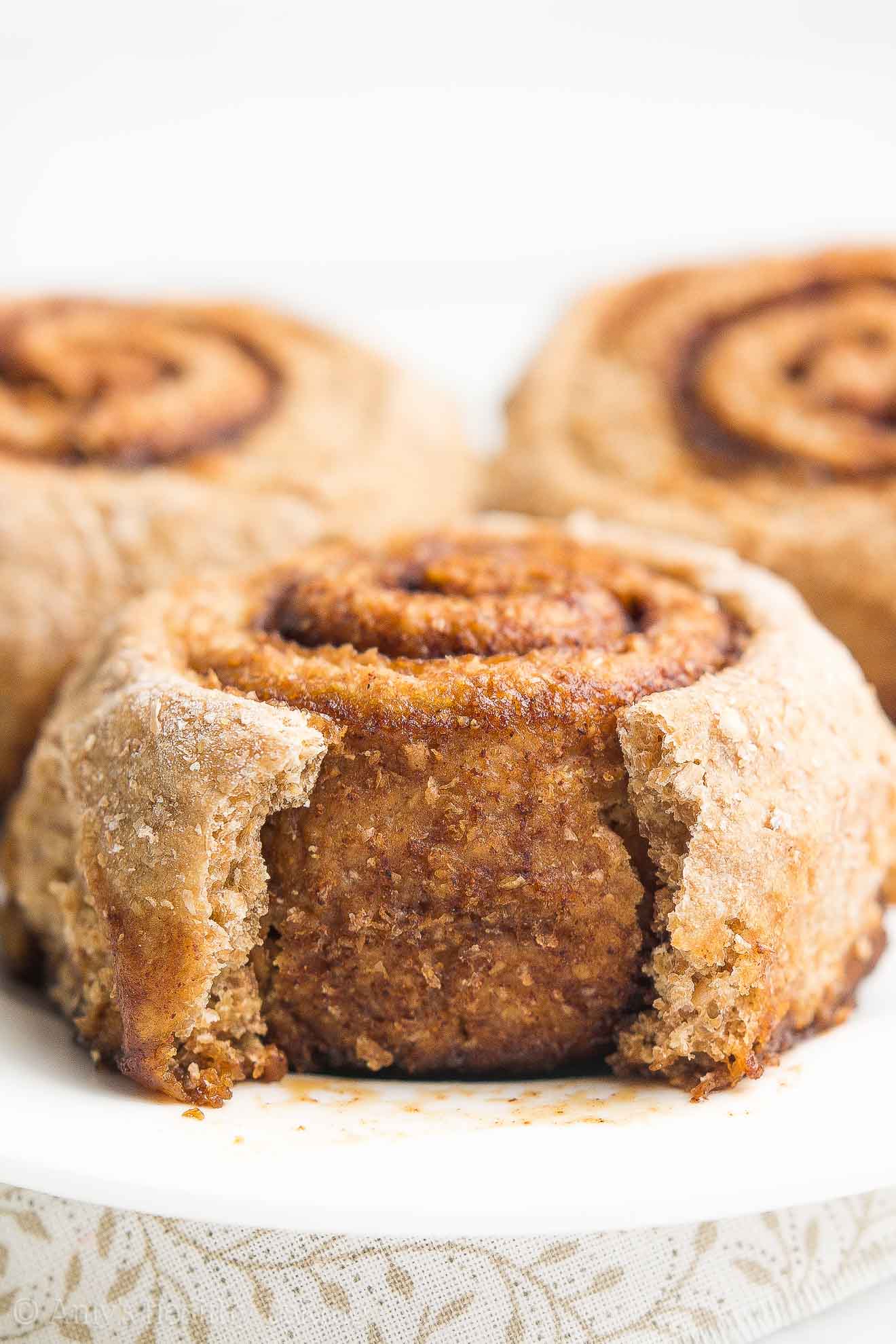 With that as my first homemade cinnamon roll experience, I thought that all cinnamon rolls required that much butter and effort to make… But now, many years and rounds of recipe testing later, I can confidently state that isn’t true—and these Ultimate Healthy Cinnamon Rolls prove it!

They’re soft, tender, fluffy, sweet, cozy, gooey, sticky… Everything a good cinnamon roll should be! But unlike traditional recipes, this one has no refined flour or sugar and just 1 tablespoon of butter—in all 12 cinnamon rolls! And they’re just 112 calories! 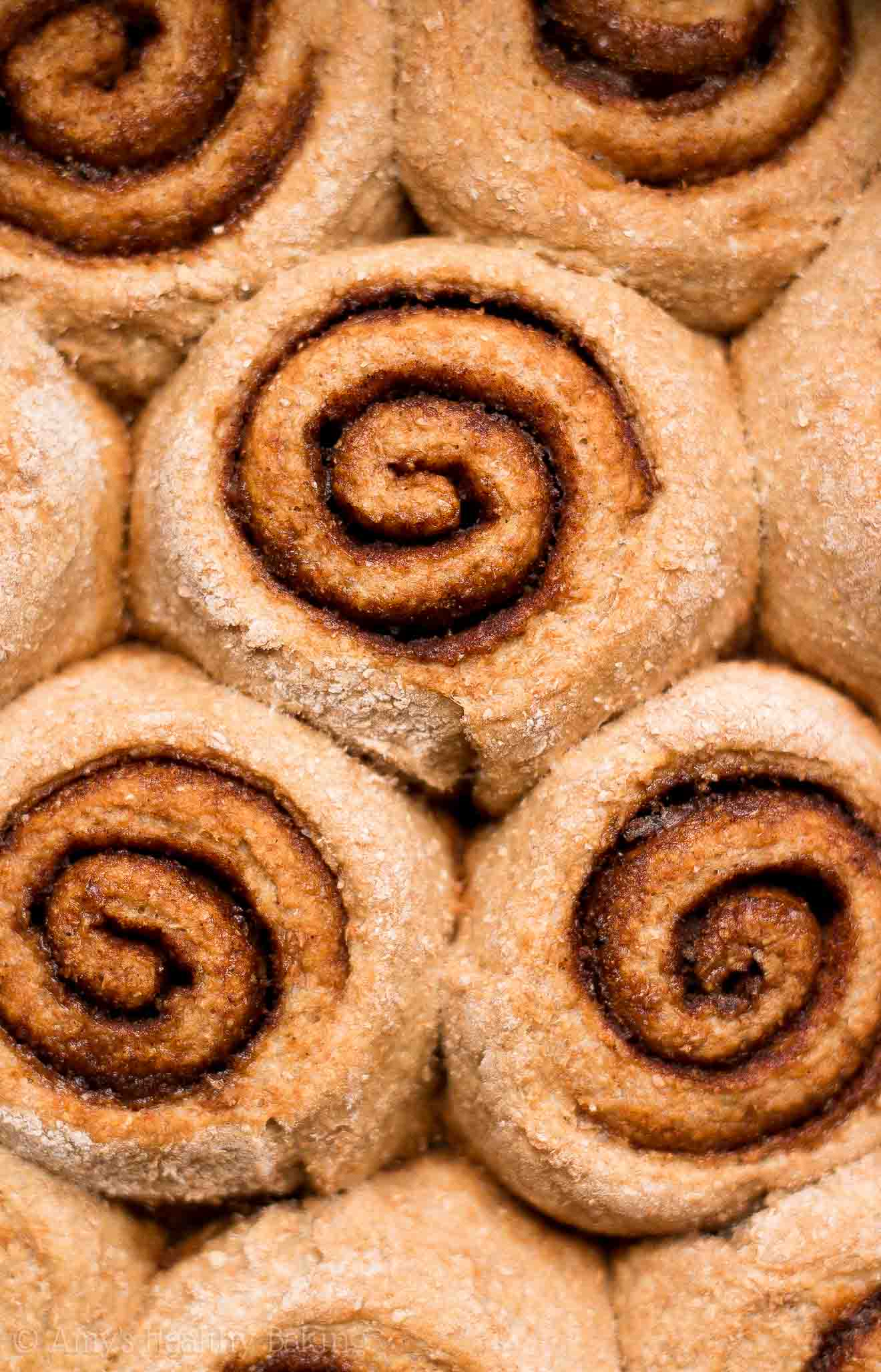 I promise these cinnamon rolls aren’t that hard to make! And to help you, I’m sharing a video right above the recipe that walks you through every single step. Nothing to be nervous about or afraid of!

But before you watch that video, let’s go over a few key things to ensure your cinnamon rolls turn out perfectly! To start, you’ll need whole wheat flour and yeast. In my rounds and rounds of recipe testing, I’ve found that Gold Medal whole wheat flour and Red Star Yeast work the best. (Red Star’s rapid-rise or classic yeast both work equally well!). This combination of flour and yeast makes your cinnamon rolls rise to at least double in size!

Other brands, especially of flour, don’t rise nearly as well, so if you’re in the US, I highly recommend using Gold Medal’s flour. It’s available at nearly every grocery store I’ve been to, as well as Target and Walmart! As for the Red Star Yeast, I can’t always find it in every grocery store, so I buy it online here. 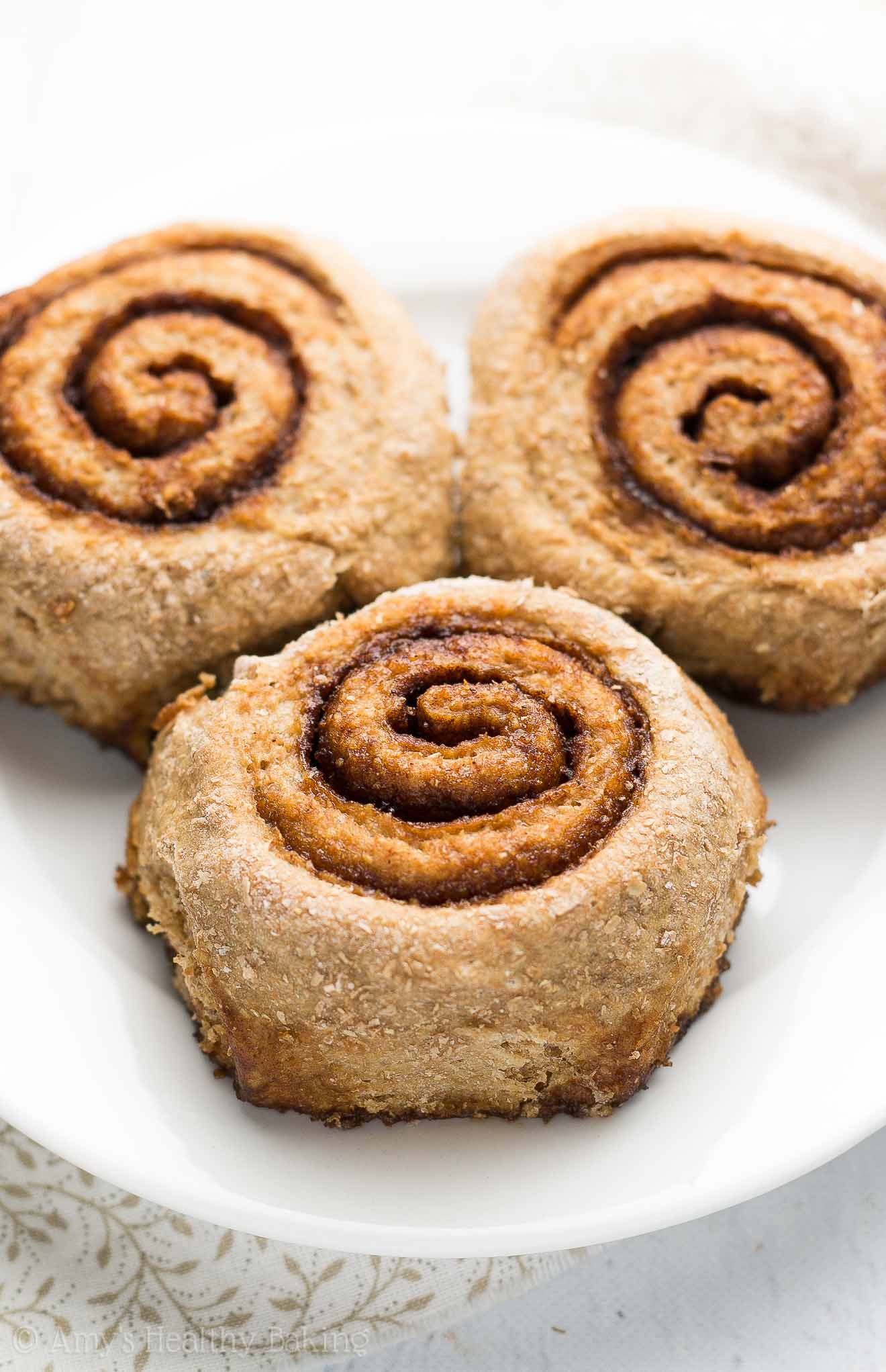 To make the dough, you’ll also need warm milk, a bit of salt, and small amount of melted butter. It’s important to use warm milk—not hot!—to activate the yeast. (Or as my dad calls it, “The yeasties!”) Hot milk will kill those little yeasties! So aim for the temperature of a really warm bath water… And if you get the temperature just right, the yeasties will make their own “bubbles,” just like a bubble bath!

Note: You may substitute coconut oil for the butter, but your yeast won’t turn frothy or bubbly if you do. For a vegan substitute, I recommend using Earth Balance instead! 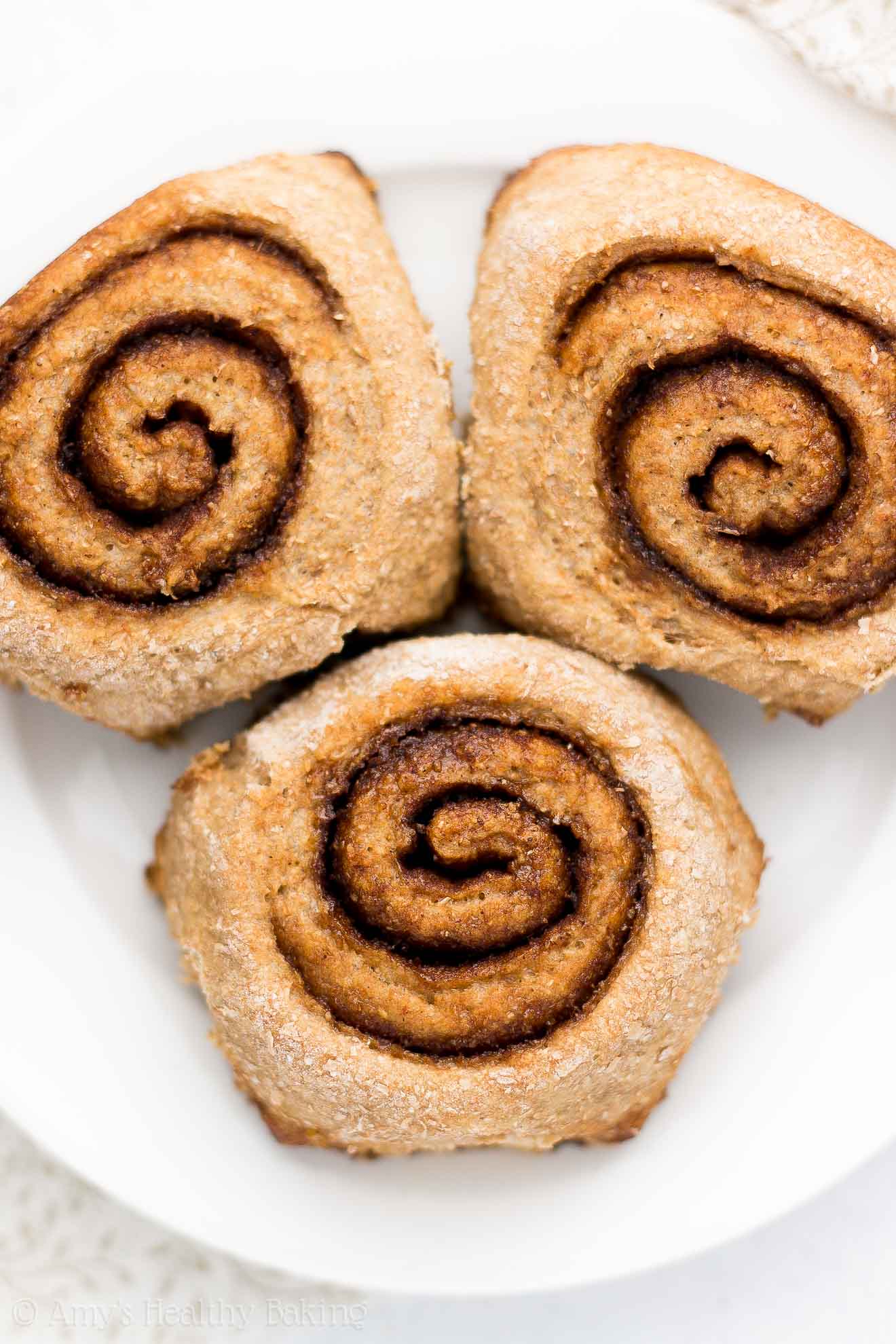 Once you’ve made the dough, you’ll knead it (watch my video below—I always do it by hand!), roll it out, brush it with a teensy tiny bit more melted butter, and sprinkle the filling on top. The filling is simple! Just coconut sugar (like this) and cinnamon (this is my current favorite!). Coconut sugar is exactly what it sounds like: an unrefined sweetener that comes from coconuts! It tastes rich and caramel-like, just like brown sugar, and doesn’t have any real “coconut” flavor. Plus it turns sticky and gooey while it bakes, which makes these cinnamon rolls oh-so-irresistible, just like their indulgent cousins!

To make this recipe easier, you only need to let the dough rise once, right after you’ve placed your cinnamon rolls in the pan. Most traditional recipes require a second rise after mixing up the dough, but I’m impatient and want to eat cinnamon rolls ASAP—and I’ve found that second rise is completely unnecessary in this recipe!

So once your cinnamon rolls turn big and puffy, about twice their initial size, pop the pan in the oven and… 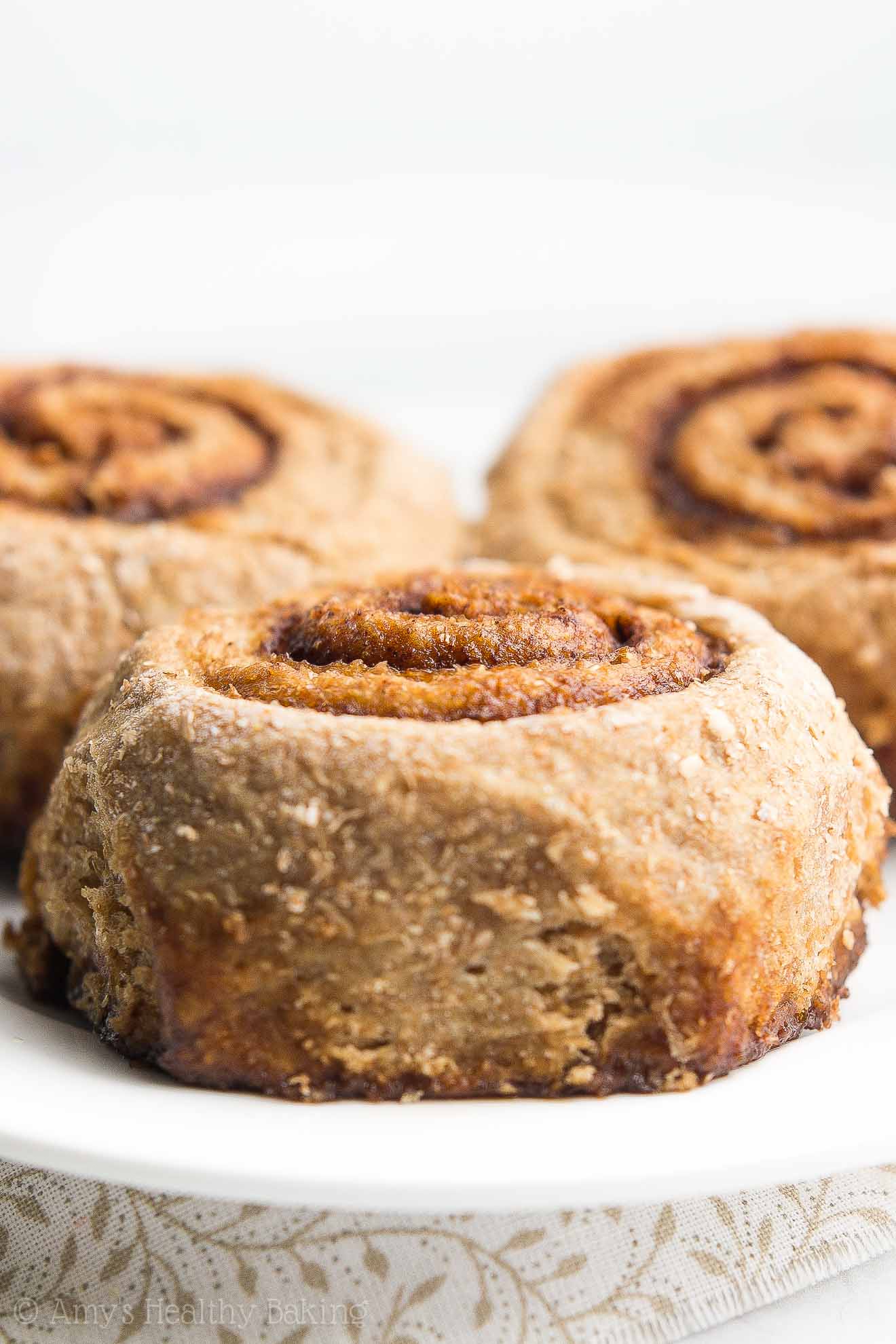 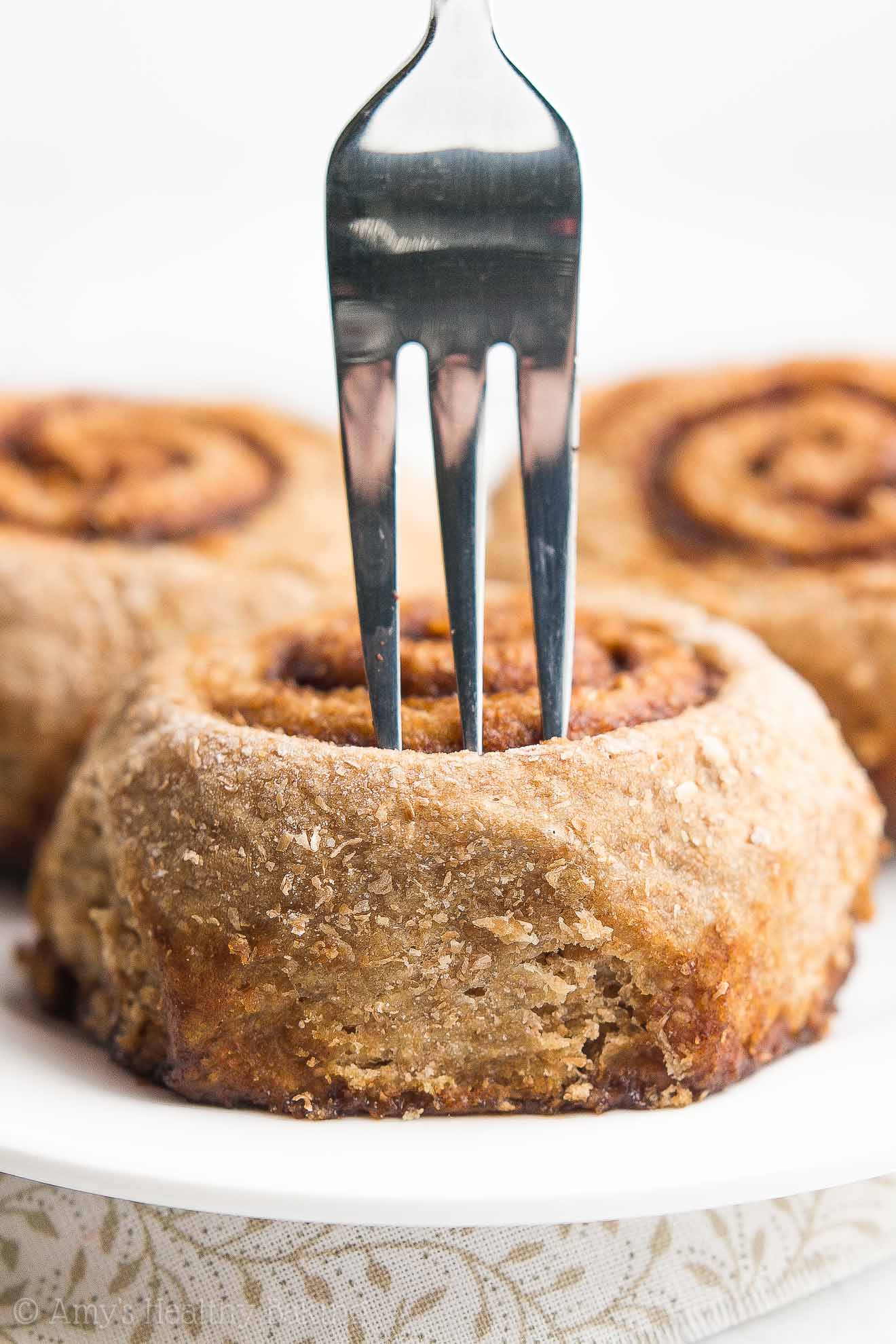 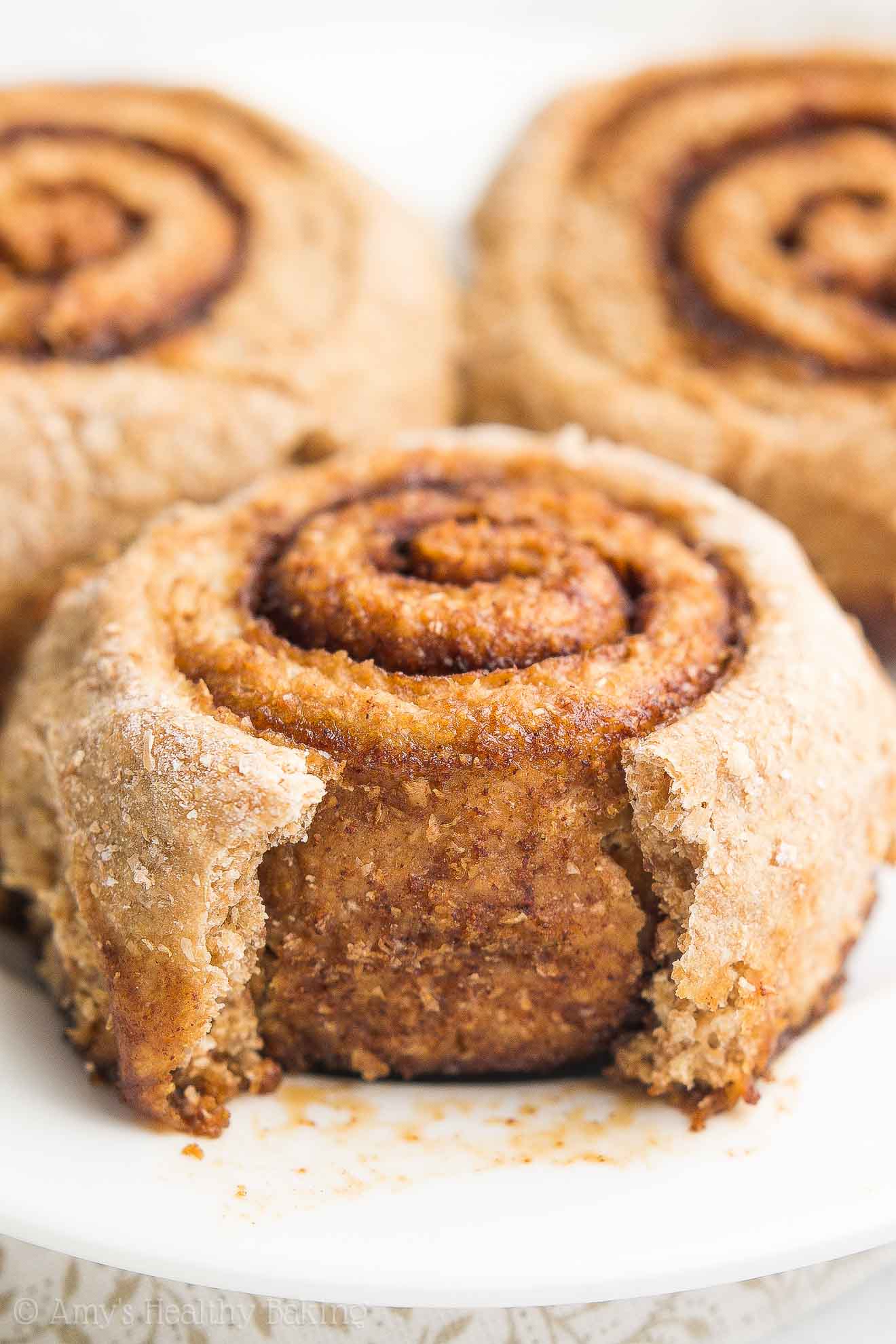 Enjoy your sweet, gooey, finger-licking-good cinnamon rolls! ?? And when you make your own, remember to snap a picture and share it on Instagram using #amyshealthybaking and tagging @amyshealthybaking IN the photo itself! (That guarantees I’ll see your picture! ?) I’d love to see your cinnamon rolls and feature them in my Sunday Spotlight series!

Click here to PIN the recipe and save it for later!
Yields: 12 cinnamon rolls
These truly are the BEST healthy cinnamon rolls I’ve ever had! Sweet, tender, cozy, gooey, oh so irresistible… Everybody always raves about them! They’ll keep for at least one week if stored in an airtight container in the refrigerator—if they last that long! (And I highly recommend reheating individual cinnamon rolls to make the filling turn melty and gooey again. Pure bliss!)
Notes: I highly recommend using a 9”-round springform pan, like this! Springform pans have taller sides than most traditional cake pans, so this allows your cinnamon rolls to rise properly without touching the top of the towel in Step 6.

For the yeast, I used Red Star® Quick Rise Yeast. It performs the best out of any yeast I’ve used, so I highly recommend it! It always easy to find in grocery stores, so I buy mine online here. (Their regular active dry yeast works equally well!)

The Healthier Chocolate Treats cookbook is perfect for any and all chocolate lovers. Whether you enjoy chocolate occasionally or every single day (that’d be me!), there are plenty of goodies inside for you! Healthier Chocolate Treats contains 50+ brand new healthier recipes. These recipes have never been seen before or appeared on my blog. You won’t find them anywhere else! And yes—every single one contains some form of chocolate. Whether you prefer milk, dark or white, there are lots of treats inside for you!     What Inspired You to Write Healthier Chocolate Treats? I have always loved chocolate. Every Halloween throughout my childhood, I inverted the entire contents of my bright … END_OF_DOCUMENT_TOKEN_TO_BE_REPLACED