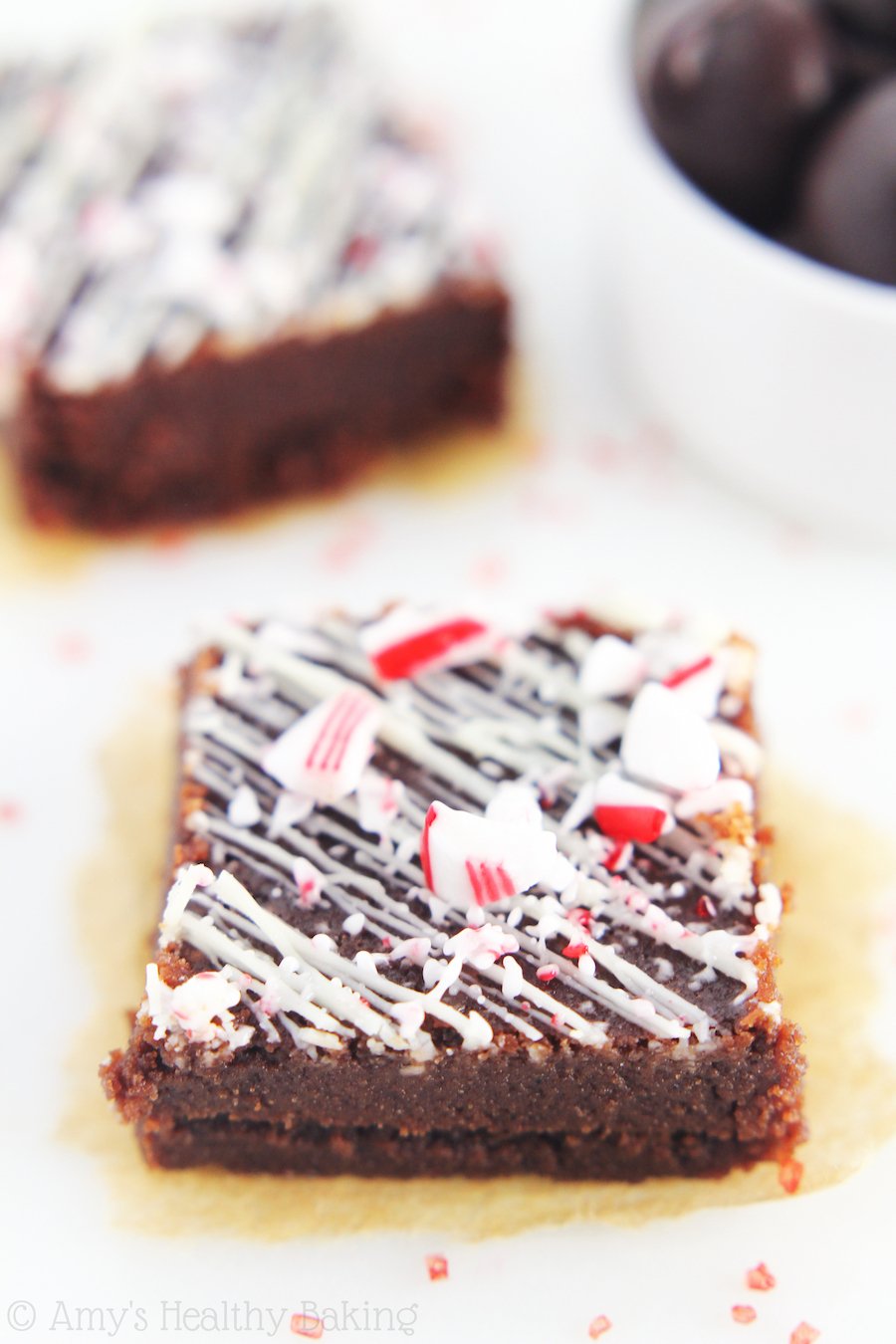 Last December, I enlisted my guy to help me make fudge. I created recipes for skinny eggnog and skinny mocha flavors, but instead of going the easy route by adding in corn syrup or marshmallow crème, we went the traditional 4-ingredient path: just sugar, milk, butter, and chocolate.

My guy immediately got the hang of it and made better fudge than I did! Smooth, creamy, luxurious… Plus his bigger muscles helped for stirring. 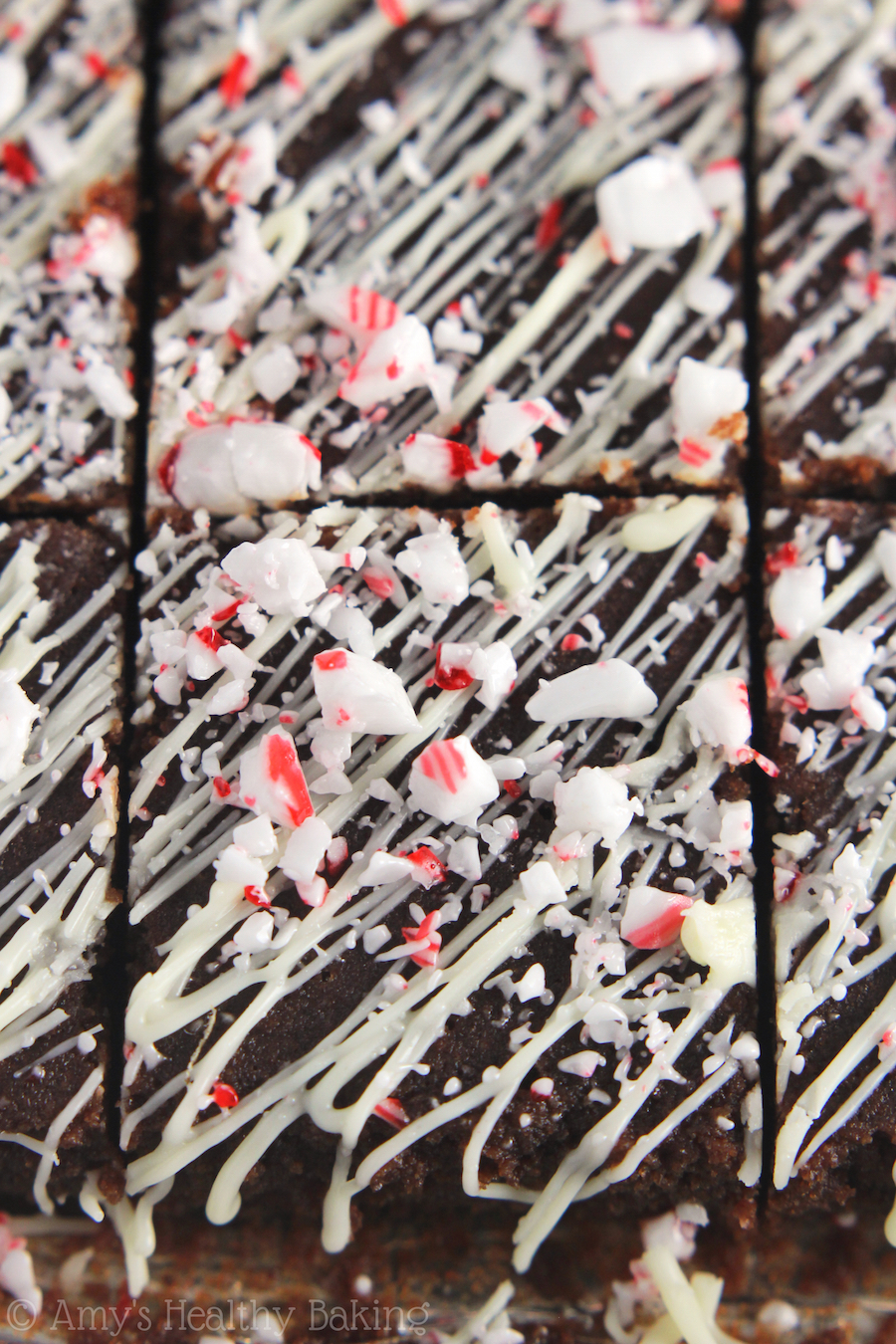 So this year, when the brilliant idea for Skinny Peppermint Bark Fudge popped into my head, I asked him for help again. I wanted it to be the soft and fudgy version of the popular holiday treat: rich dark chocolate on the bottom, white chocolate on top, and crushed peppermint candy showered over the squares.

Five batches later, we finally perfected the recipe! As big chemistry nerds (yes, I was an organic chemist before a blogger!), we learned a lot about the science of making fudge, so I’ve included our tips below so yours turns out perfectly too. 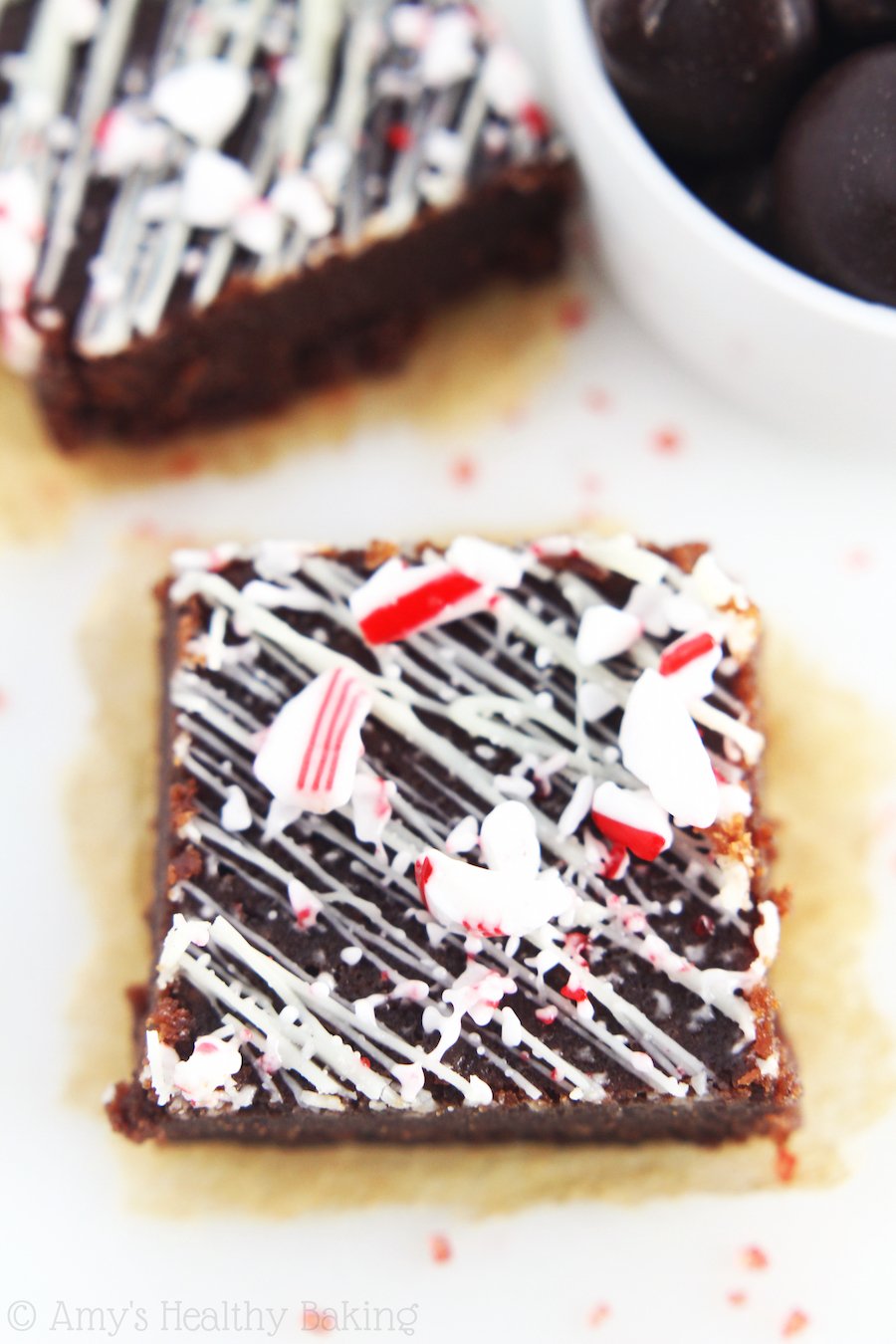 I prefer either Ghirardelli or Baker’s brands. They’re sold in 4-ounce bars on the baking aisle, usually above the shelves with the chocolate chips, and you’ll use 3 ounces in this fudge.

Note: Do not substitute chocolate chips! They contain a stabilizer that prevents them from melting as readily. That’s great for baking cookies, when you’d prefer the pockets of chocolate to stay intact instead of oozing all over the place, but for fudge, bars of chocolate are much better.

2) Dissolve the sugar before heating the pot. This prevents the sugar from burning on the bottom of the pot. Just give the milk and sugar a few quick stirs, and you’re good to go! 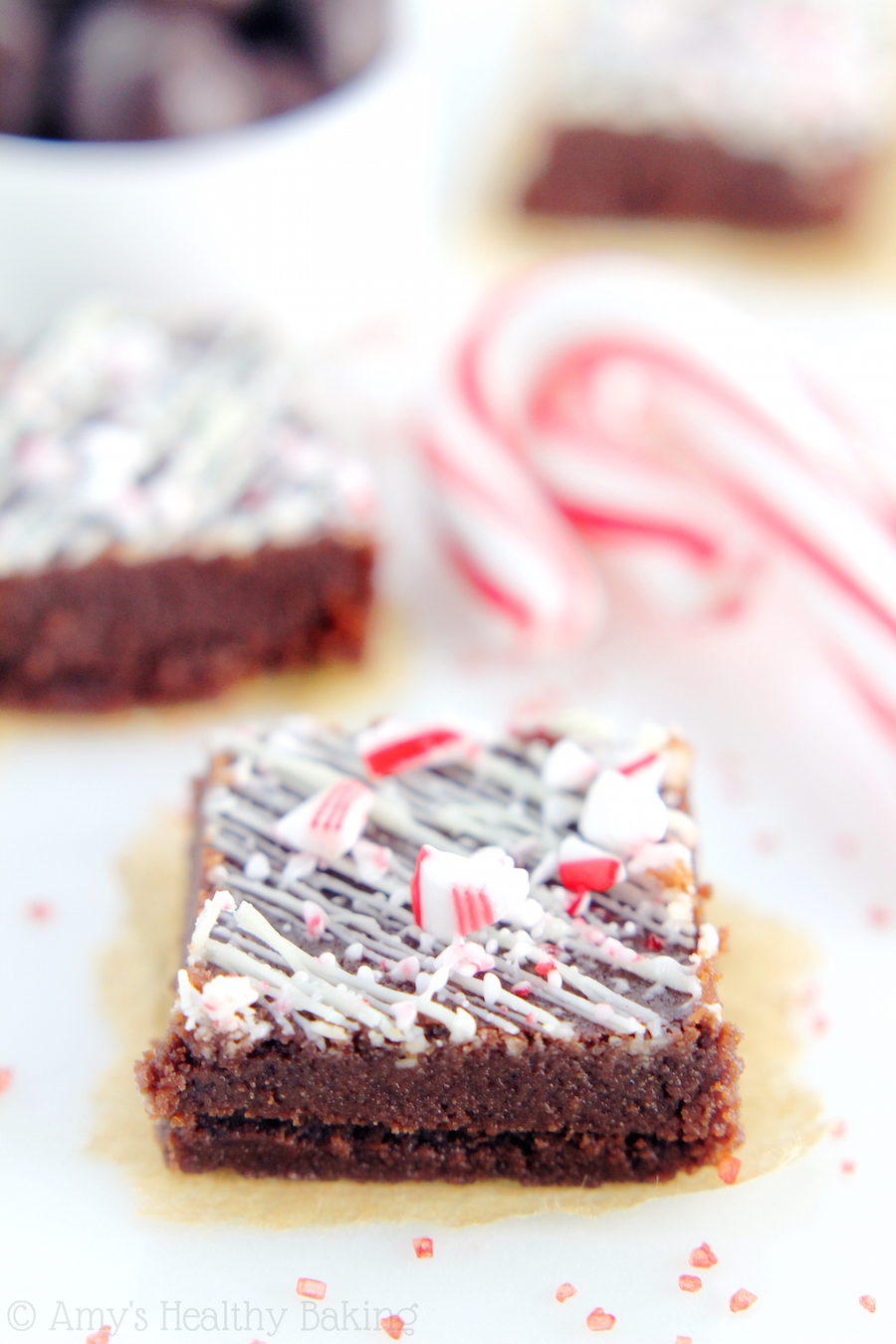 3) Cook the mixture to 238-240°F. This is called the soft-ball stage. In Batch #1, we pulled the dark chocolate fudge off of the burner at about 236°F. This was a few degrees too short of the soft-ball stage, so the fudge never set. It was closer to the texture of my favorite fudgy frosting instead! (I was very tempted to scrape off the white chocolate and spread the “fudge” on brownies…)

However, do NOT go above 240°F. This is too close to the firm-ball stage, which is what happened with Batch #2. This higher temperature leads to brittle fudge that’s crumbly and as a hard as a rock.

Note: It’s very important to use a candy thermometer. They’re relatively inexpensive, but they ensure smooth and cream fudge every time. This is the one I own, but if you can, splurge a little on a digital one instead. They’re much more precise! 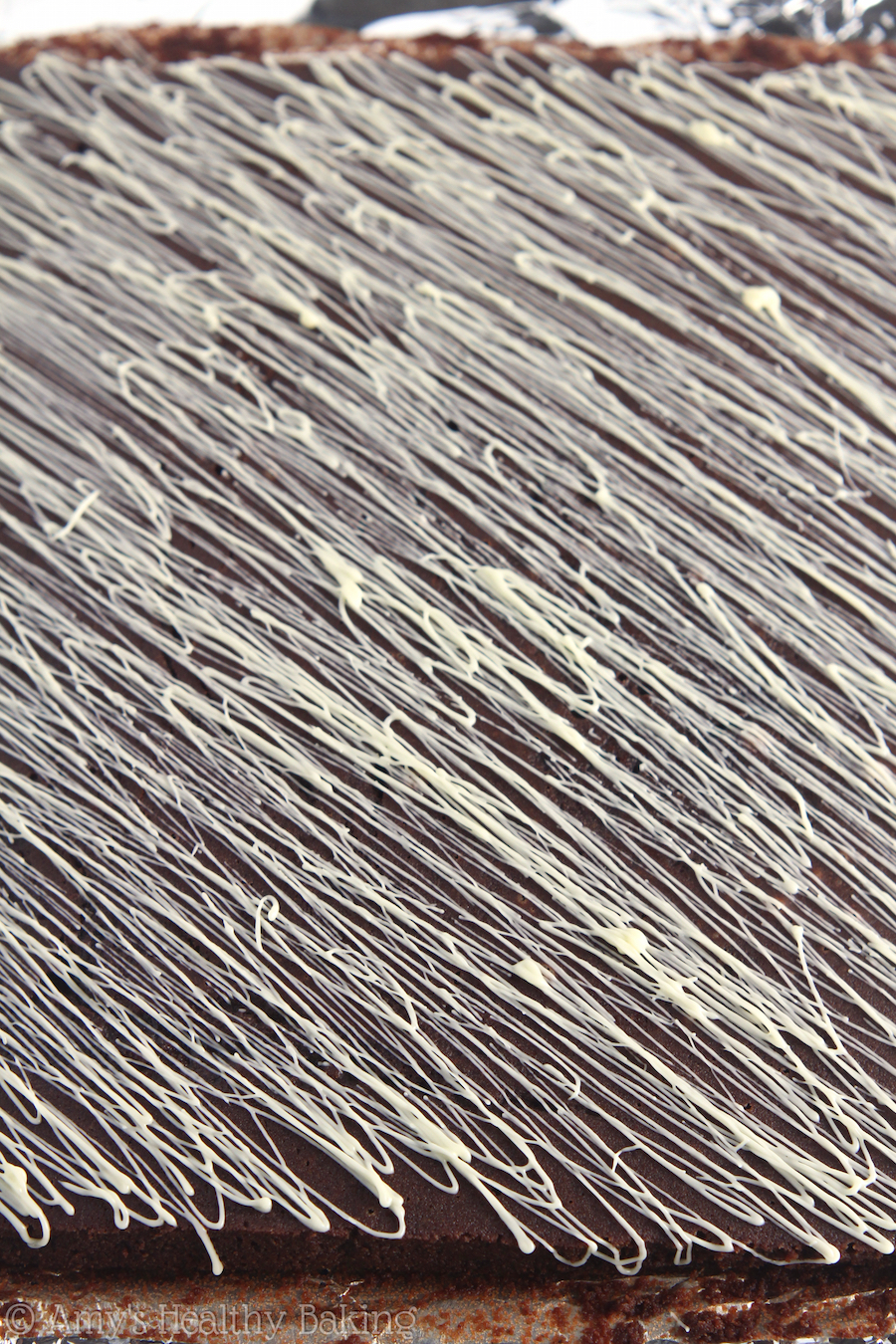 Be patient! Depending on the size of your pot, this could take up to 25-30 minutes.

5) Use fresh milk. Okay, this sounds obvious, but I wanted to include it just in case. We tried making Batch #4 about five days after Batch #1, and somehow during that time period, our freshly opened milk went bad. Once all of the chocolate and butter had melted, a few off-white chunks started to form… Then more… And more… And more. Ew. So check your milk before pouring it in! 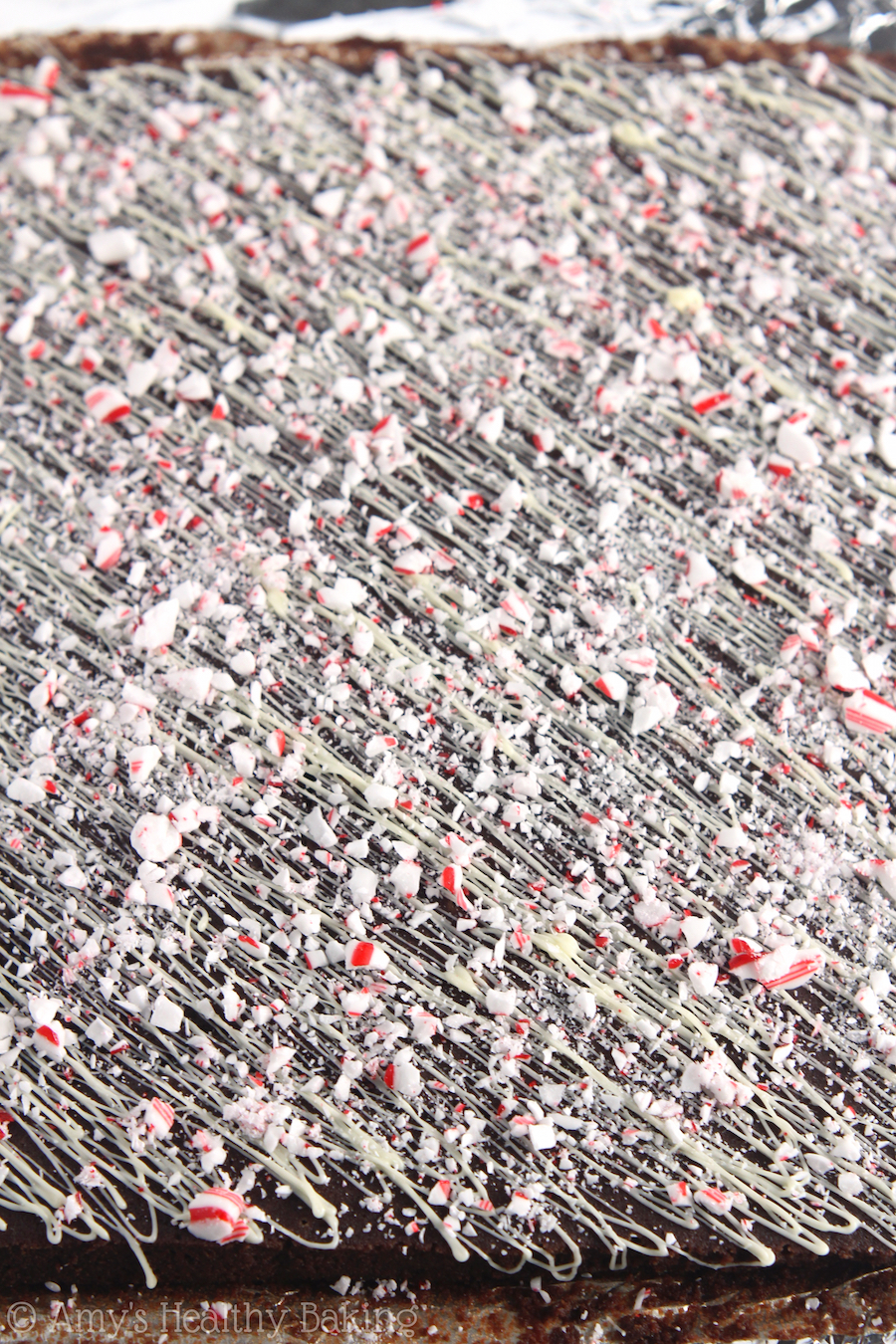 7) Eat the fudge within a few hours! Okay, so not exactly a tip to making perfect fudge, but… The moisture in the air will cause the crushed candy canes to melt and turn gooey. If you plan on making this and serving it a day or two later, mix the candy canes into the dark chocolate fudge just before pouring it into the pan instead. It won’t look like cute red and white snow fell on top, but it’ll still have that light peppermint taste throughout! 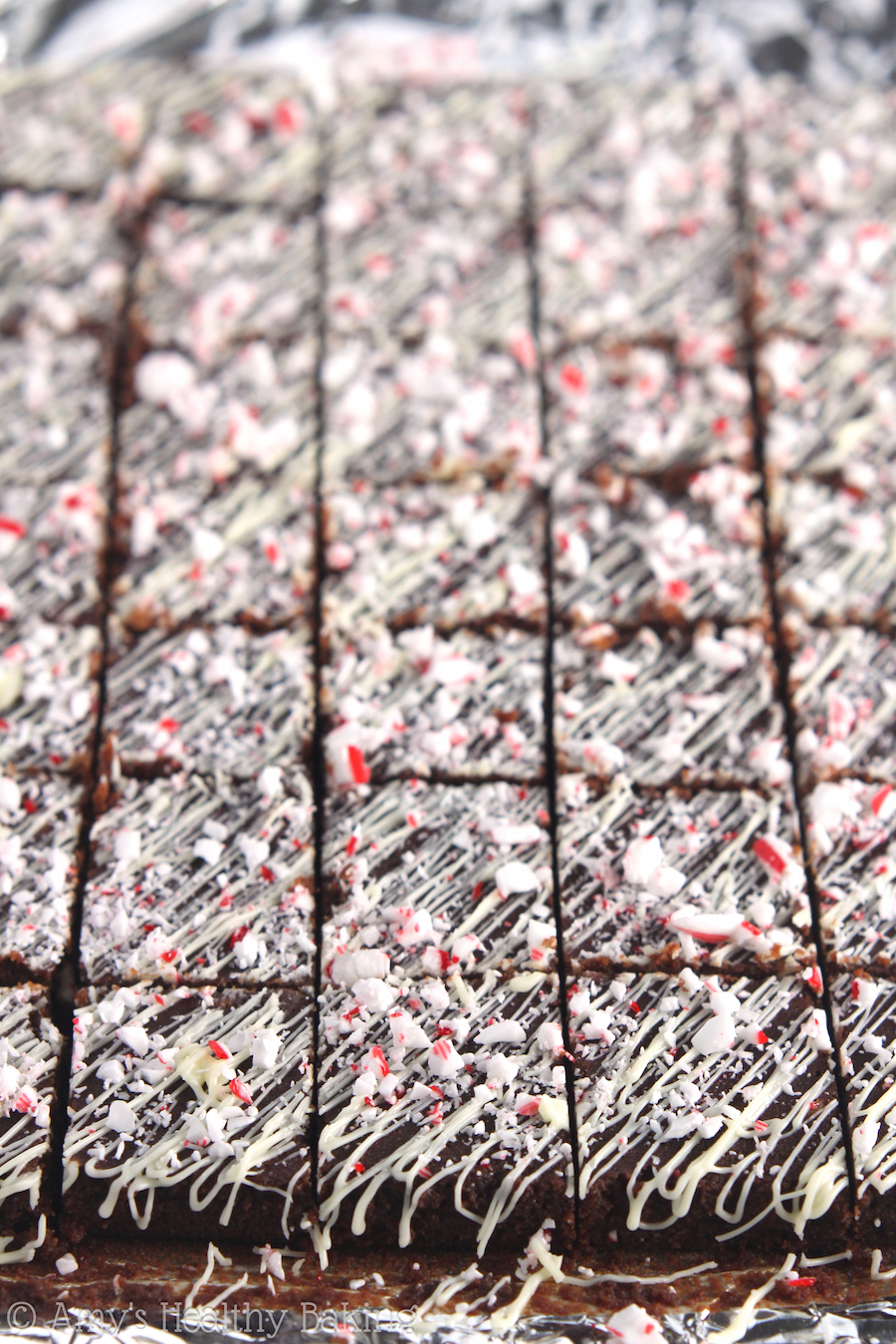 The morning after we I ate my weight in this Skinny Peppermint Bark Fudge, my guy already wanted to make more! But this time, he proposed a new flavor… So tonight, we’re off to make that—and probably another batch of this peppermint bark variety. Our friends and family may be swimming in festively decadent fudge on Christmas Day! 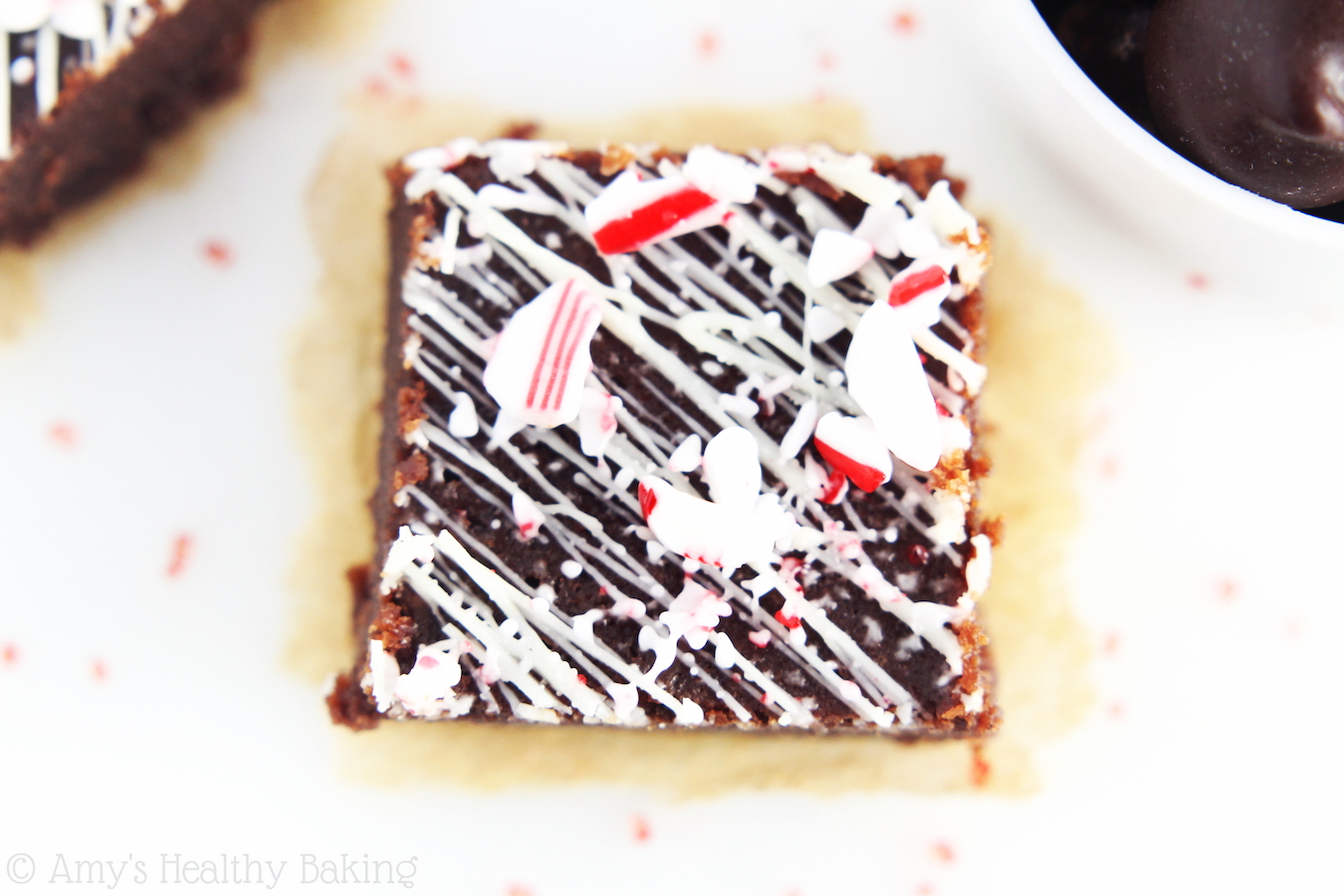 I highly recommend a candy thermometer. It will ensure your fudge turns out smooth and creamy every time. If you cook the mixture above 240°F, the fudge will be brittle and hard as a rock. If you begin stirring before it cools to 110°F, the fudge will be much grainier and have a sandy texture. This is the one I own, but if you can buy a digital thermometer like this one, it will ensure more accurate results.

This fudge is best if eaten the same day it’s made because the candy canes begin to “melt” from the moisture in the air. If you’d rather serve it a day or two later, stir the crushed candy canes into the dark chocolate fudge just before pouring it into the pan. This ensures a peppermint taste throughout without the gooey/sticky melted candy canes on top. 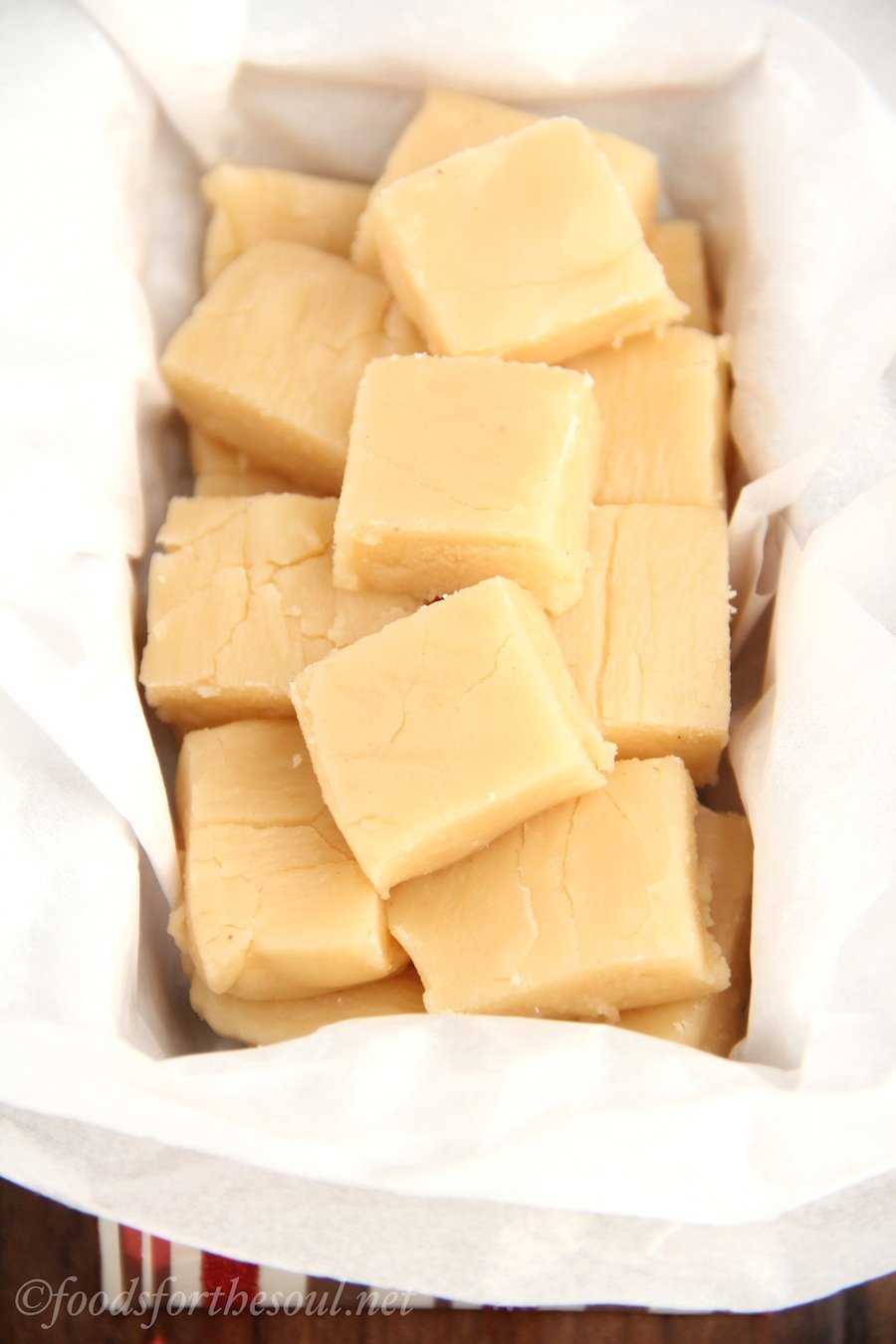 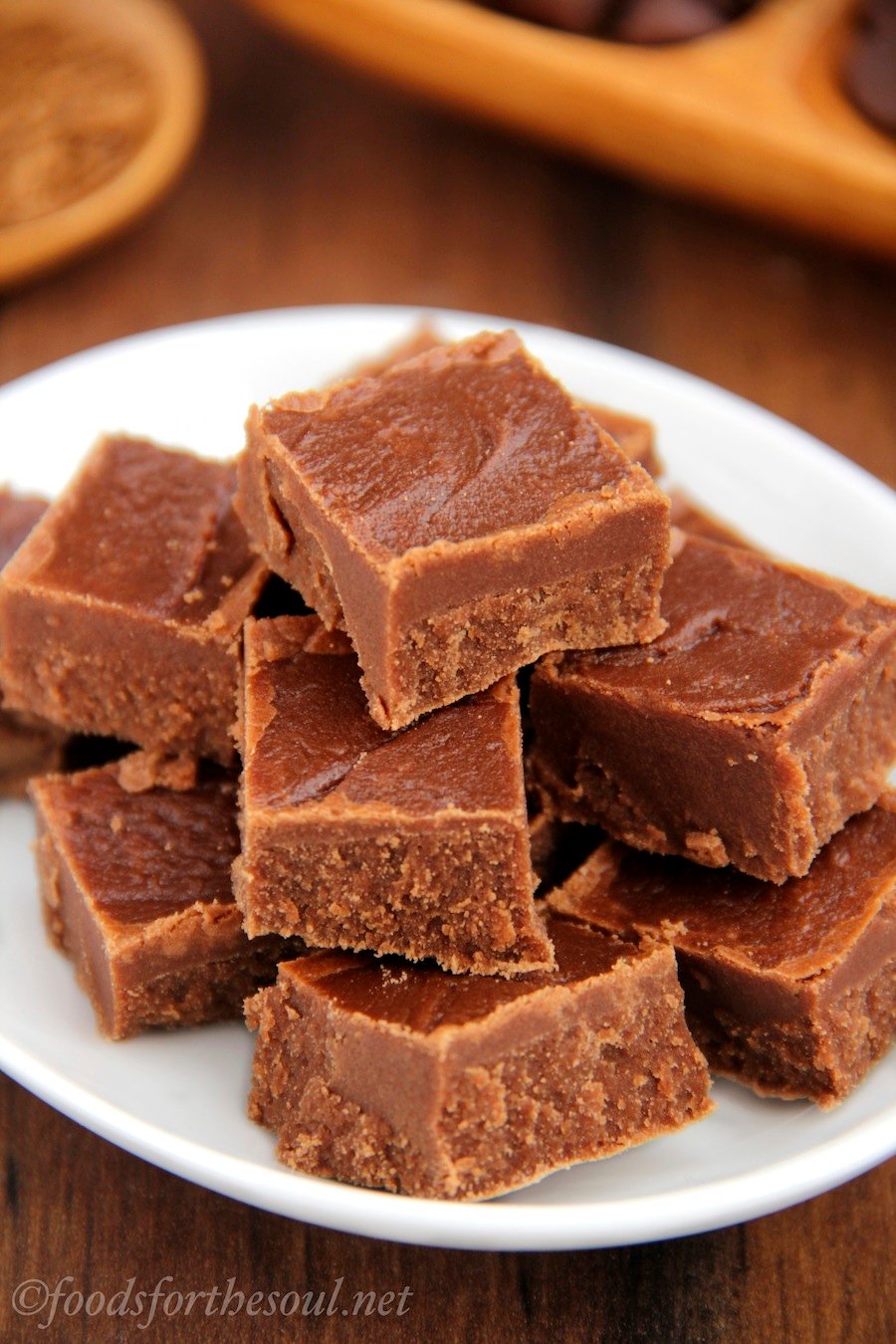 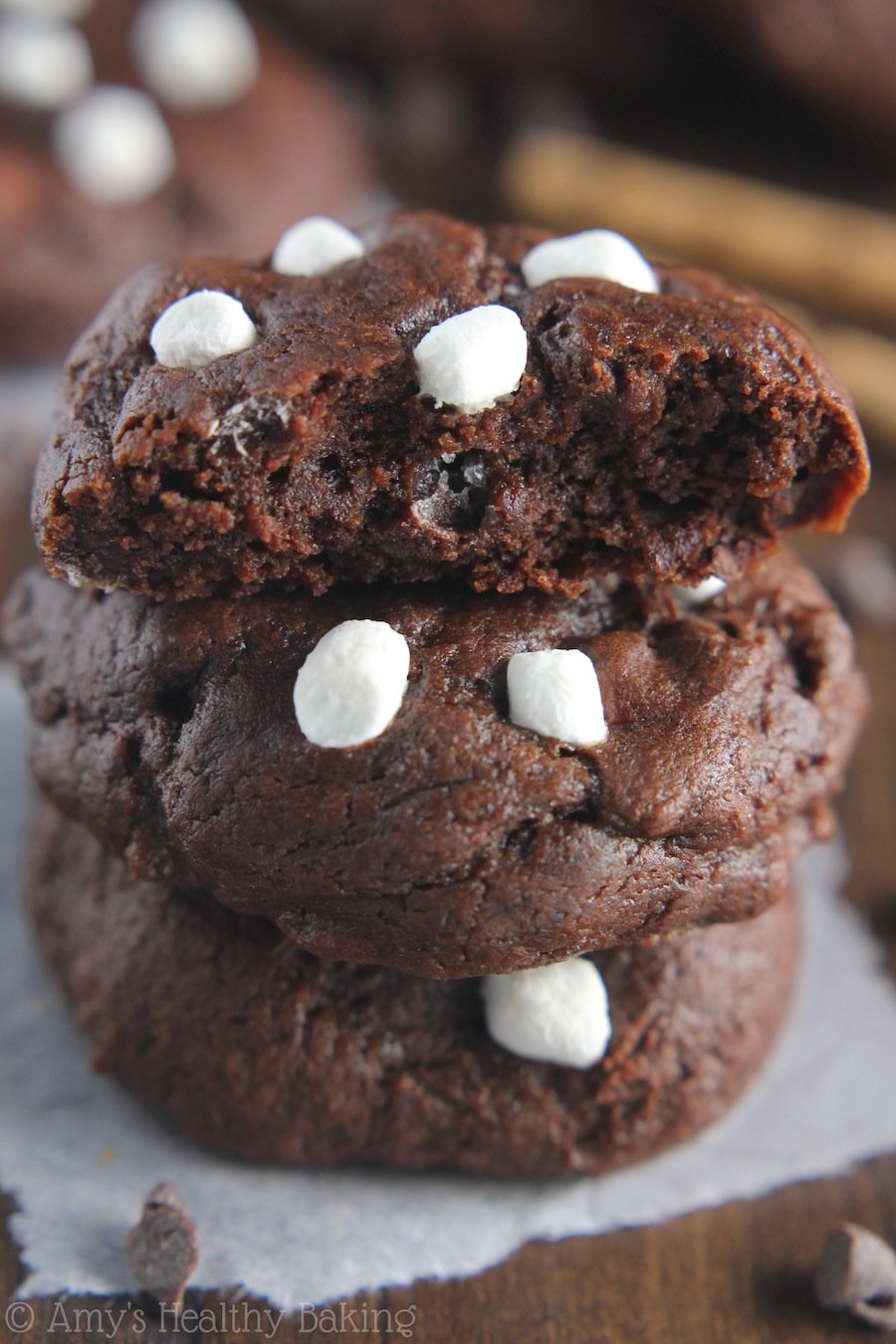 Peppermint Bark Puppy Chow by Your Cup of Cake

Peppermint Bark Milkshake by Two Peas and Their Pod

The Healthier Chocolate Treats cookbook is perfect for any and all chocolate lovers. Whether you enjoy chocolate occasionally or every single day (that’d be me!), there are plenty of goodies inside for you! Healthier Chocolate Treats contains 50+ brand new healthier recipes. These recipes have never been seen before or appeared on my blog. You won’t find them anywhere else! And yes—every single one contains some form of chocolate. Whether you prefer milk, dark or white, there are lots of treats inside for you!     What Inspired You to Write Healthier Chocolate Treats? I have always loved chocolate. Every Halloween throughout my childhood, I inverted the entire contents of my bright … END_OF_DOCUMENT_TOKEN_TO_BE_REPLACED