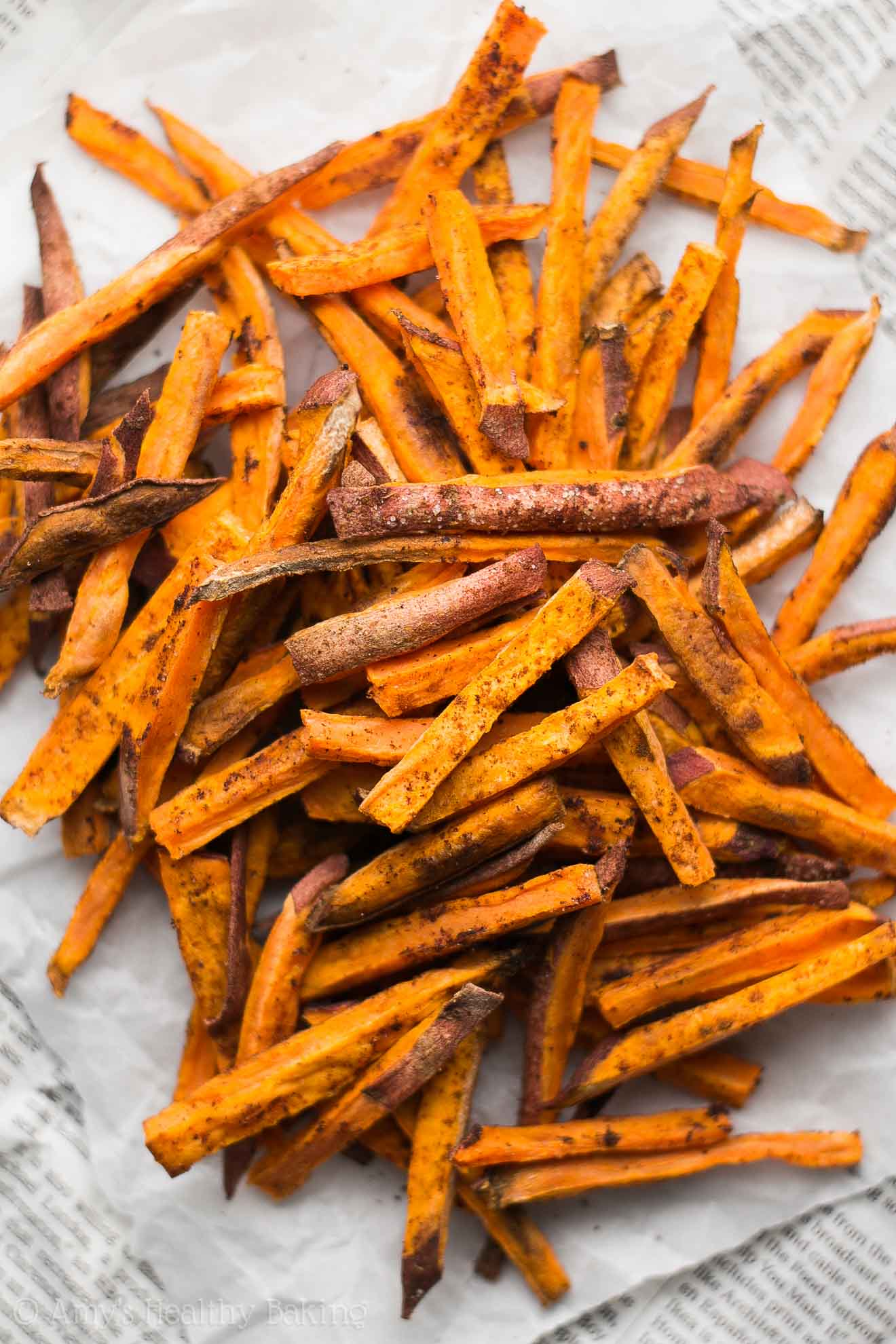 This past September, one of my best friends, my mom, and I drove into the city on a Saturday evening to watch the St. Louis Cardinals play the San Francisco Giants. We arrived shortly before the baseball game began, just in time to see the national anthem and ceremonial first pitch (thrown out by US Olympian Aly Raisman!), and settled into our seats along the right field line as the players ran onto the field.

After the first inning, Mom stood up to stretch her legs and walk around the stadium in search of dinner. When she reached the food stalls behind the left field bleachers, she found something that sounded incredibly tempting, and she returned to our seats with a freshly carved brisket sandwich and… 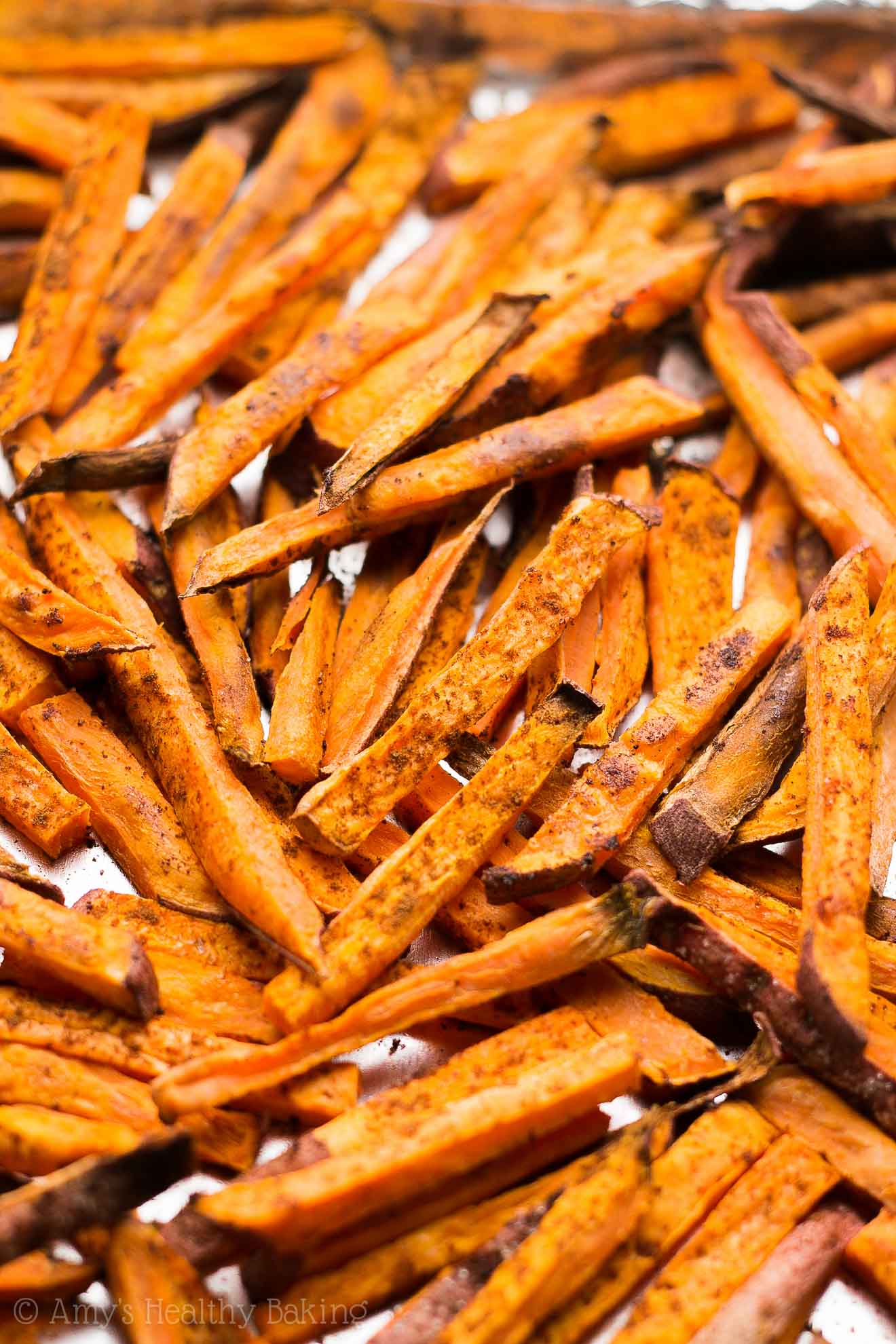 A basket of sweet potato fries. Hot, crispy, and showered with cozy cinnamon and spicy cayenne, according to the menu board. Since she knew how much I adore fries (I’ve made an entire meal out of them too many times to count!), she immediately offered me everything that was left in the small red and white checkered cardboard tray.

In between pitches and plays, I slowly savored those sweet potato fries, but when I bit into the final one, I glanced down at the basket. Although that warm cinnamon paired perfectly with the sweet potato, I never tasted a single bit of heat. The cook in charge must’ve forgotten to sprinkle the cayenne on that batch!

Now that the Chicago Cubs won the World Series and this year’s baseball season is officially over, I’ve started to go through withdrawals. I listened to a game on the radio nearly every day from March through October while baking, photographing, and washing the dishes, so my afternoons and evenings have been strangely silent! While waiting for Spring Training to start, I’ve pulled out my stack of baseball-themed movies to watch on DVD, and… 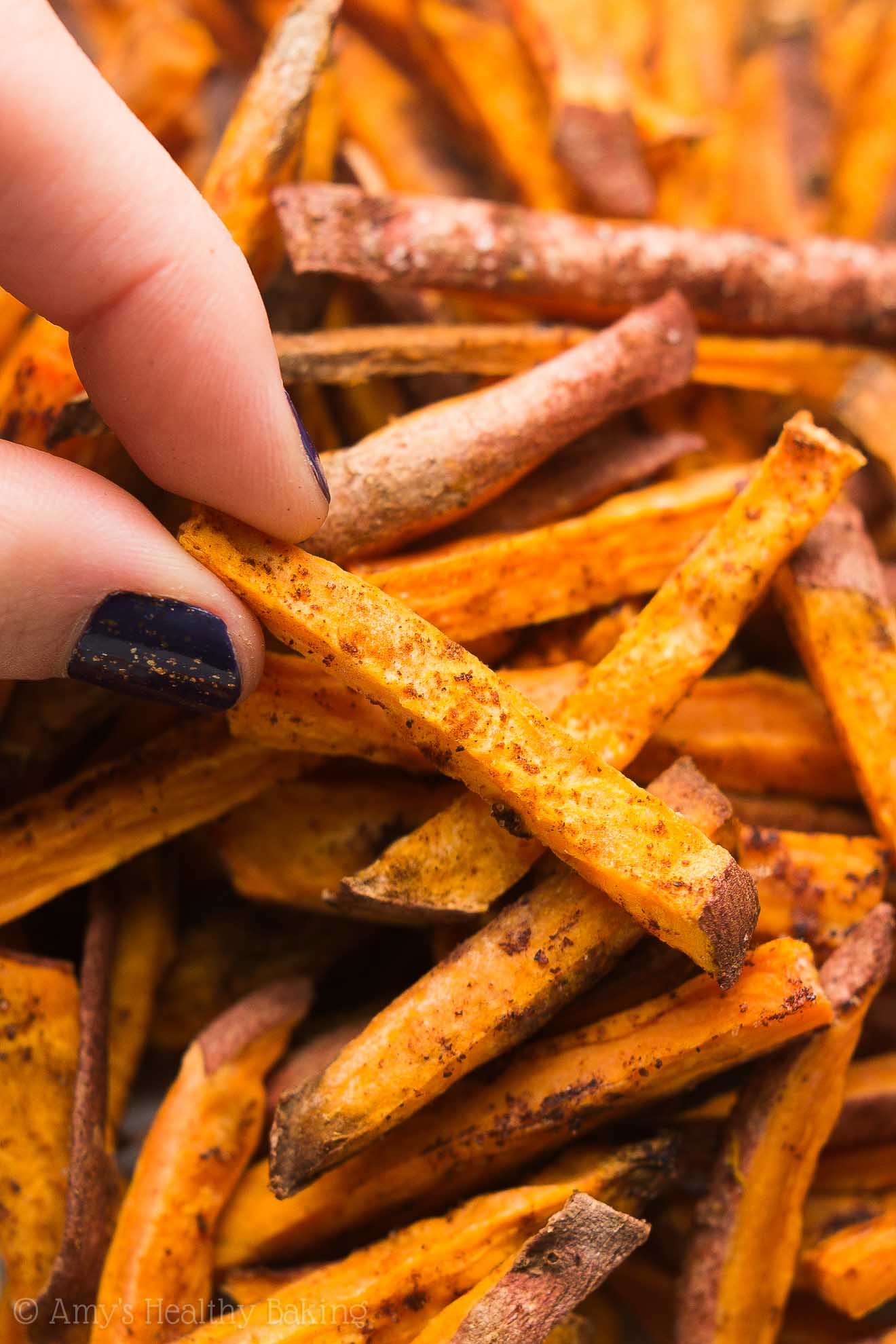 I’m making batches of these Spicy Cinnamon Baked Sweet Potato Fries to go with them! They’re the perfect combination of sweet and cozy, and since they’re baked (not fried!), they’re much healthier than those ballpark originals. Just be warned…

They’re highly addictive, especially with how easy they are to make! 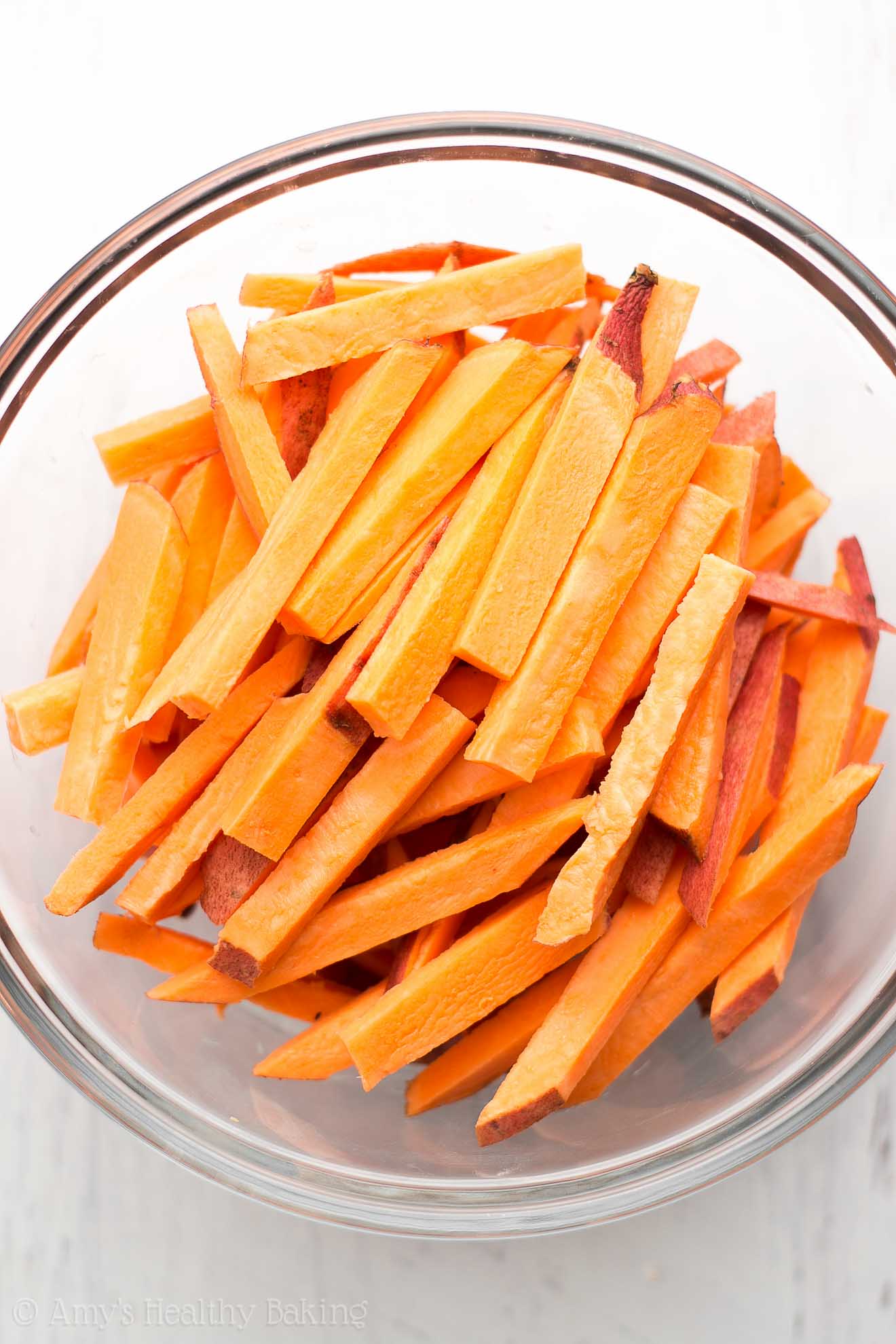 Whenever I stop by the grocery store’s produce section during the fall, I usually feel a tiny bit confused by the vegetable display. I can always identify the classic white russet potatoes. Yet half the time, the orange things sitting next to them are labeled as “sweet potatoes,” and the rest of the time, they’re called “yams!” But the good news? Both will work!

And since the recipe itself is so simple, let’s go over a few quick tips on how to make the best oven-baked fries. 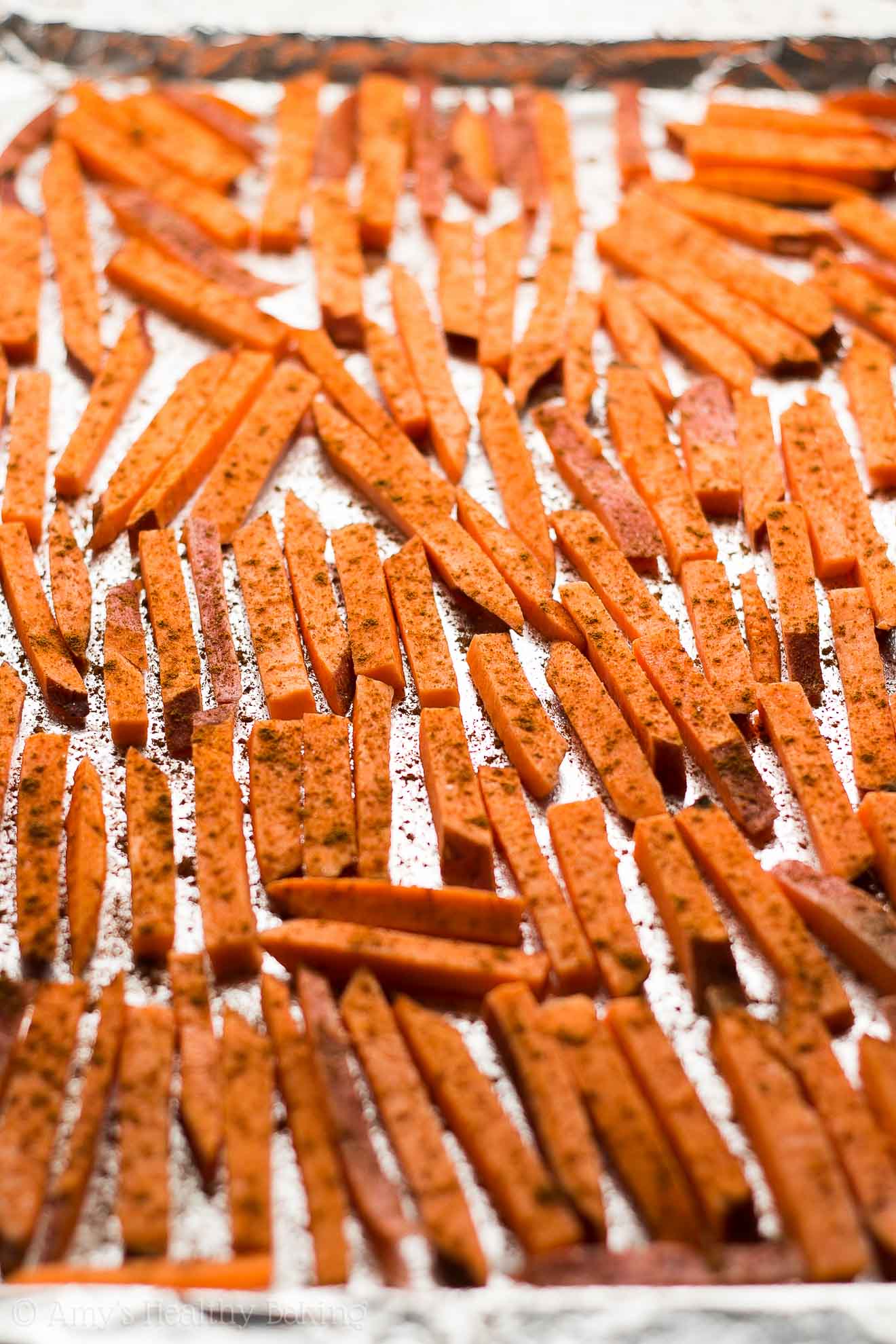 1) Cut the sweet potatoes into small, equal-sized strips. Aim for no more than ¼” thick! Thinner strips are much more likely to turn out crispy, and if they’re all about the same size, they’ll bake evenly too.

2) Soak those strips in water for 10-15 minutes. Then just before arranging them on the baking tray, drain and pat them dry to remove excess moisture. Soaking the sweet potatoes in water removes some of their starch (you’ll see the water turn slightly opaque). The starch is the main thing that prevents your fries from turning crispy while baking, so soaking the sweet potatoes really helps with your fries’ texture.

3) Mist the fries with cooking spray, and bake at a high heat. The combination of a tiny bit of oil and a higher oven temperature helps turn their outsides slightly crispier than if you baked them at a traditional temperature of 350°F. 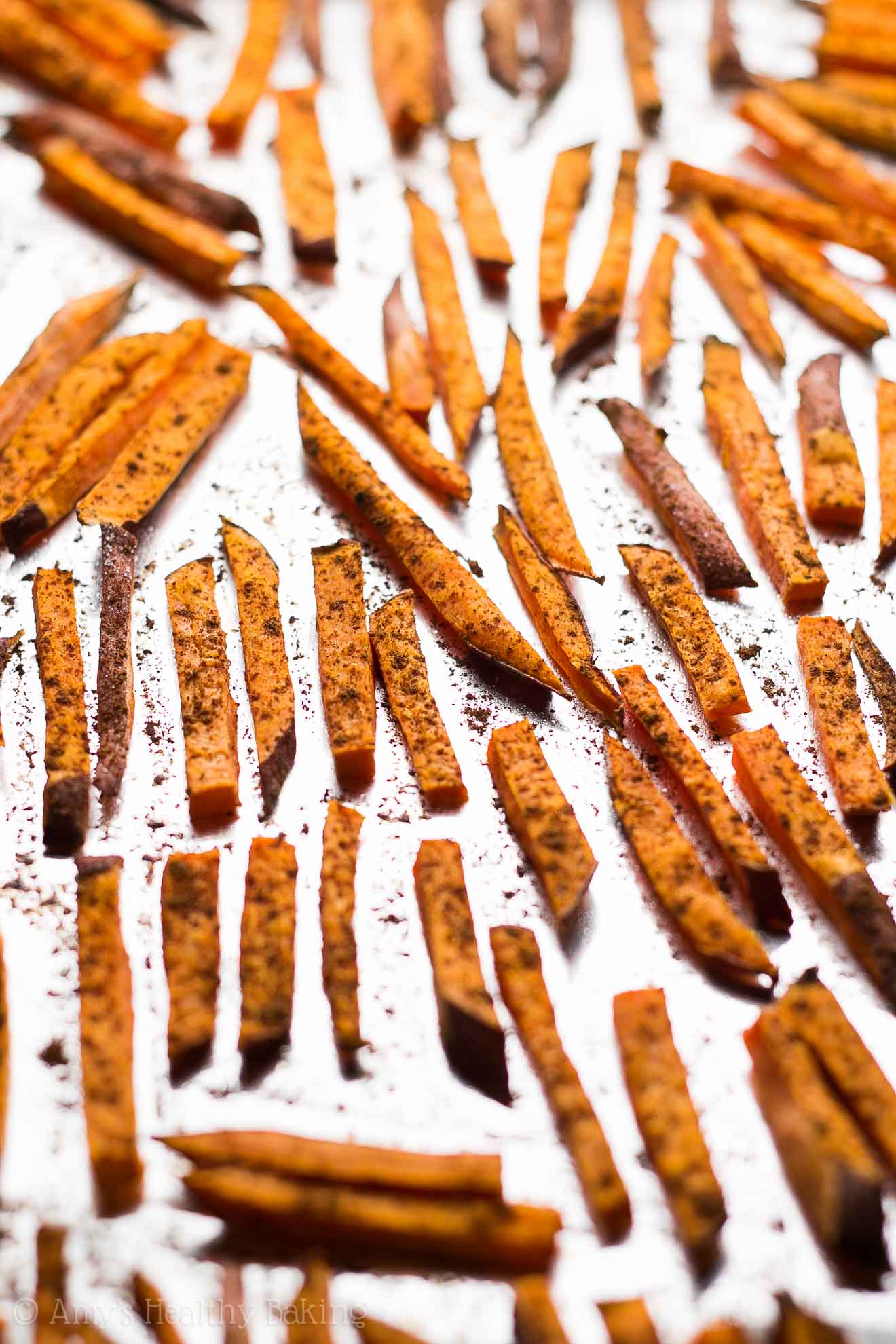 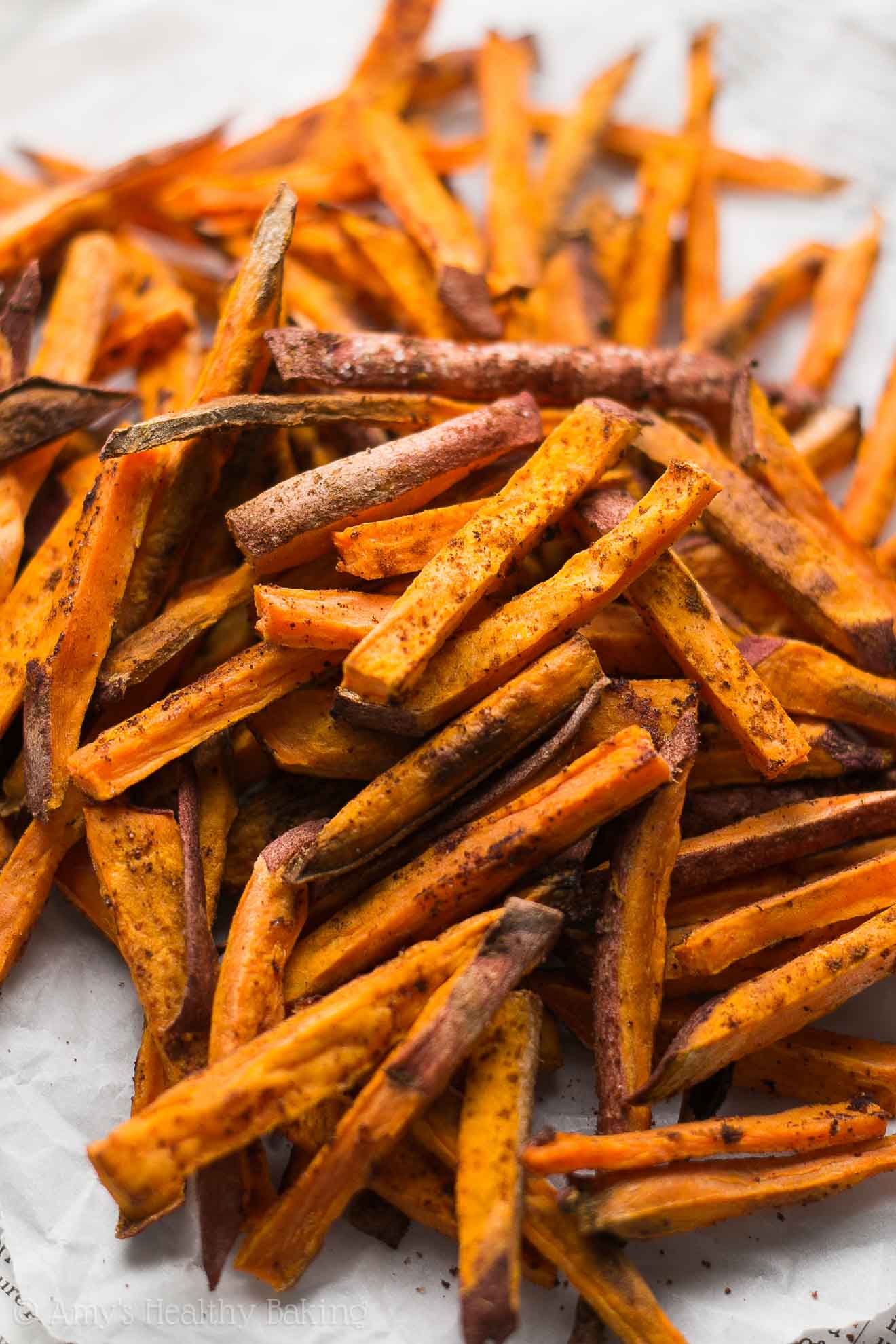 P.S. I always leave the skin on my sweet potatoes! Because (a) it contains lots of nutrients, (b) it generally turns crispier than the orange flesh, and (c) I’m lazy. {But mostly the last reason!}

Now all that’s left to do is sprinkle them with the cayenne and cinnamon, set your timer, and… 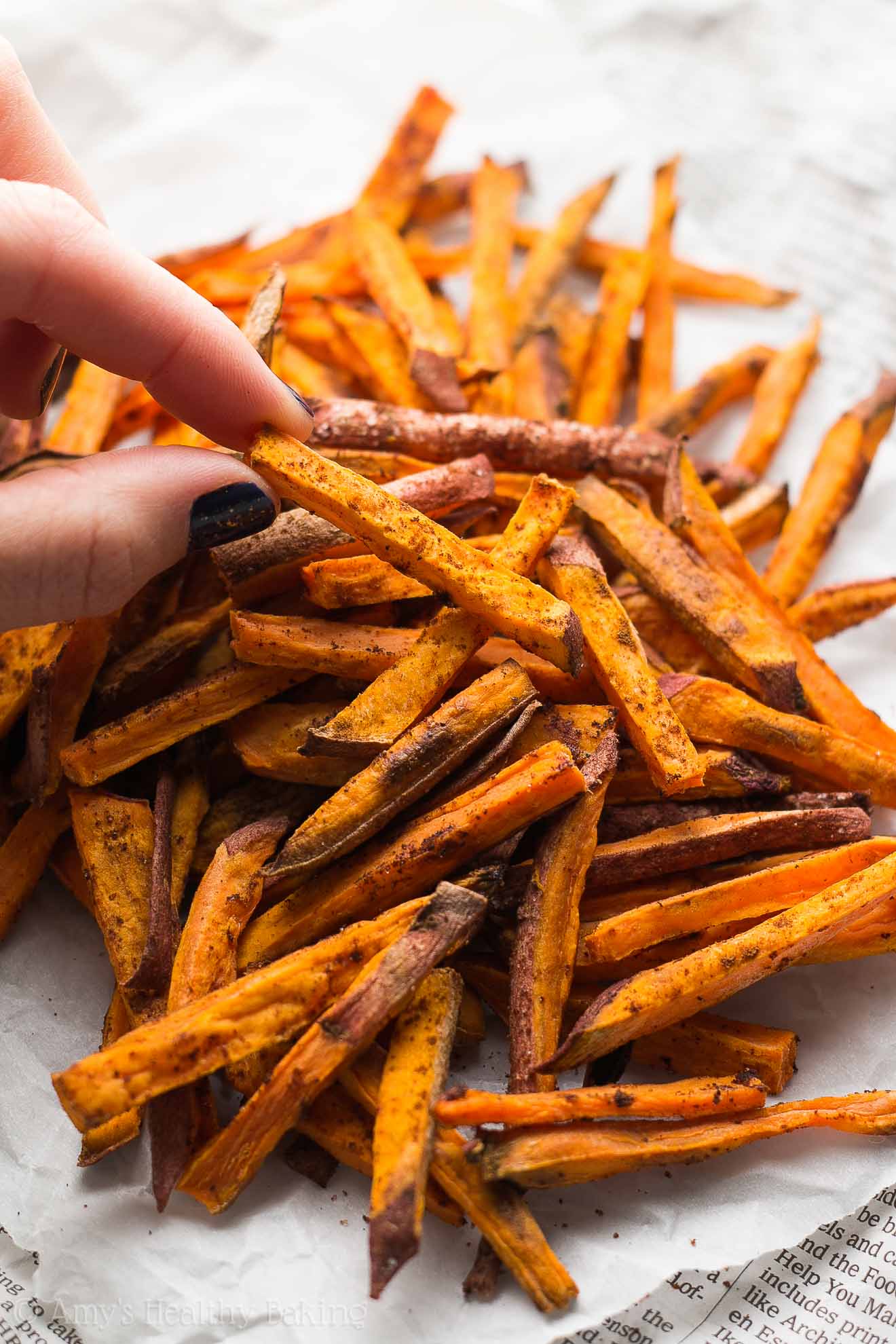 Dig in! ??? After sharing a batch with my parents, my dad immediately asked if we could make them again… And that wasn’t just because I ate over half the tray. They’re that good!

And when you make your own, remember to snap a picture and share it on Instagram using #amyshealthybaking and tagging @amyshealthybaking IN the photo itself! (That guarantees I’ll see your picture! ?) I’d love to see your sweet potato fries and feature them in my Sunday Spotlight series!

Click here to PIN the recipe and save it for later!
Yields: 4 servings
This easy recipe is perfect for any french fry lover! The combination of sweetness from the potatoes, a hint of heat from cayenne, and cozy cinnamon is absolutely addictive. They’re best if eaten immediately after they’re made, and the recipe is easily doubled to serve more!
Notes: I leave the skin on my sweet potatoes because (a) it contains lots of nutrients, (b) it generally turns crispier than the orange flesh, and (c) I’m lazy. {But mostly the last reason!}

It’s important to cut the sweet potatoes into thin strips no more than ¼” thick in diameter. Thinner strips are much more likely to turn out crispy, and if they’re all about the same size, they’ll bake evenly too.

Soaking the sweet potatoes in water removes some of their starch (you’ll see the water turn slightly opaque). The starch is the main thing that prevents your fries from turning crispy while baking.

Adjust the amount of cayenne to suit your tastes. I prefer these on the spicy side, so I use the full ¼ teaspoon.

The Healthier Chocolate Treats cookbook is perfect for any and all chocolate lovers. Whether you enjoy chocolate occasionally or every single day (that’d be me!), there are plenty of goodies inside for you! Healthier Chocolate Treats contains 50+ brand new healthier recipes. These recipes have never been seen before or appeared on my blog. You won’t find them anywhere else! And yes—every single one contains some form of chocolate. Whether you prefer milk, dark or white, there are lots of treats inside for you!     What Inspired You to Write Healthier Chocolate Treats? I have always loved chocolate. Every Halloween throughout my childhood, I inverted the entire contents of my bright … END_OF_DOCUMENT_TOKEN_TO_BE_REPLACED