An easy recipe for rich chocolate muffins full of Greek yogurt, hearty bran, and chocolate chips! Only 105 calories & no refined flour or sugar! (And no mixer required either!)
Click here to PIN the recipe and save it for later! 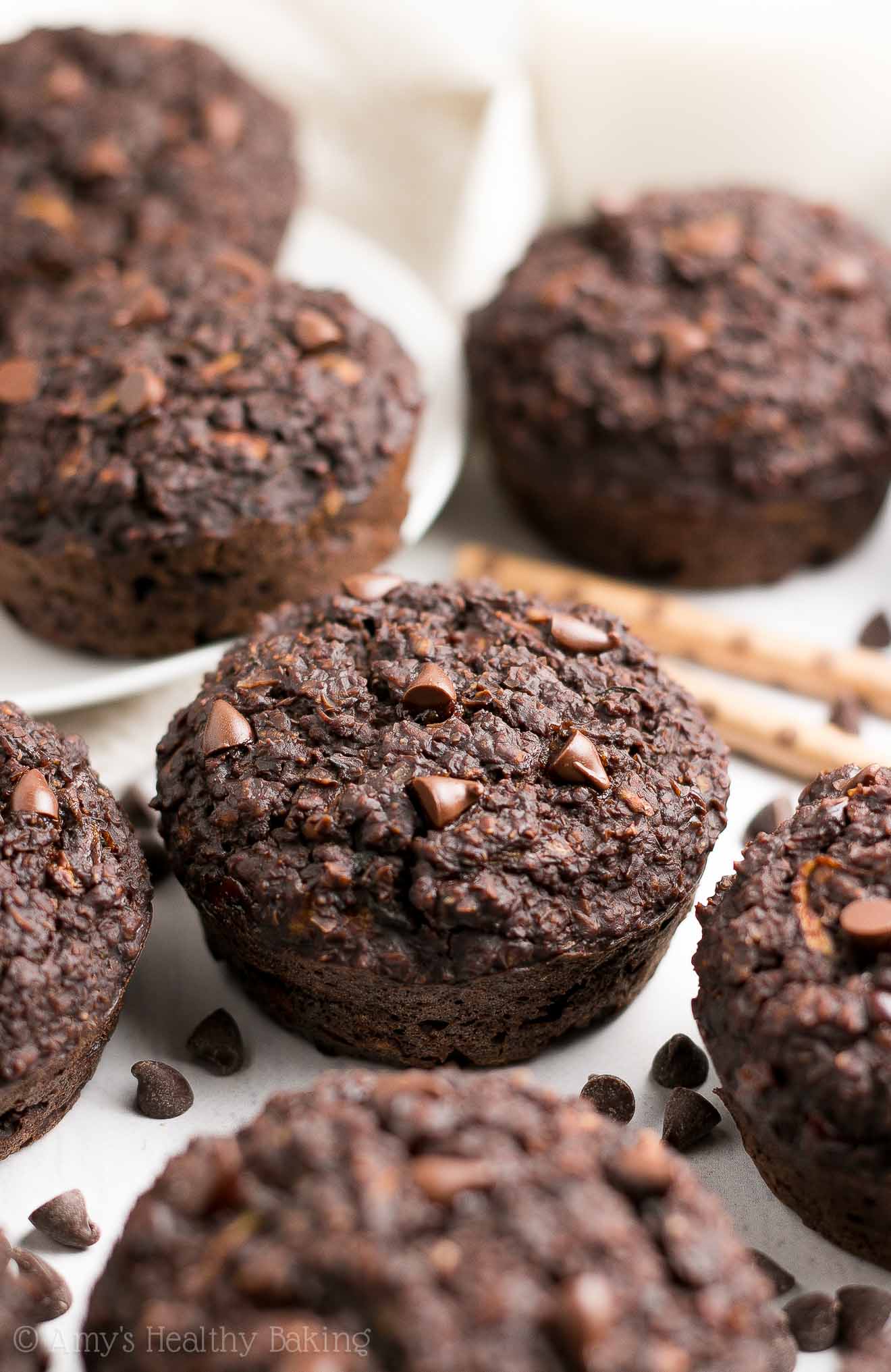 During the winter quarter of my first year in graduate school, I enrolled in a mandatory spectroscopy lab, which met once a week at 7:30 am. By the time the sun rose, about a dozen of my classmates and I were sitting in the Chemistry Building basement, ready for our three-hour session.

We took turns setting up and running the special magnetic machines. They looked like shiny metal cylinders, standing six to ten feet tall and three to five feet wide, and if we manipulated them properly, they would create a printout that looked like a random spiky mountain range… And from the peaks in that graph, we could determine the exact spatial arrangement of atoms in small molecules. 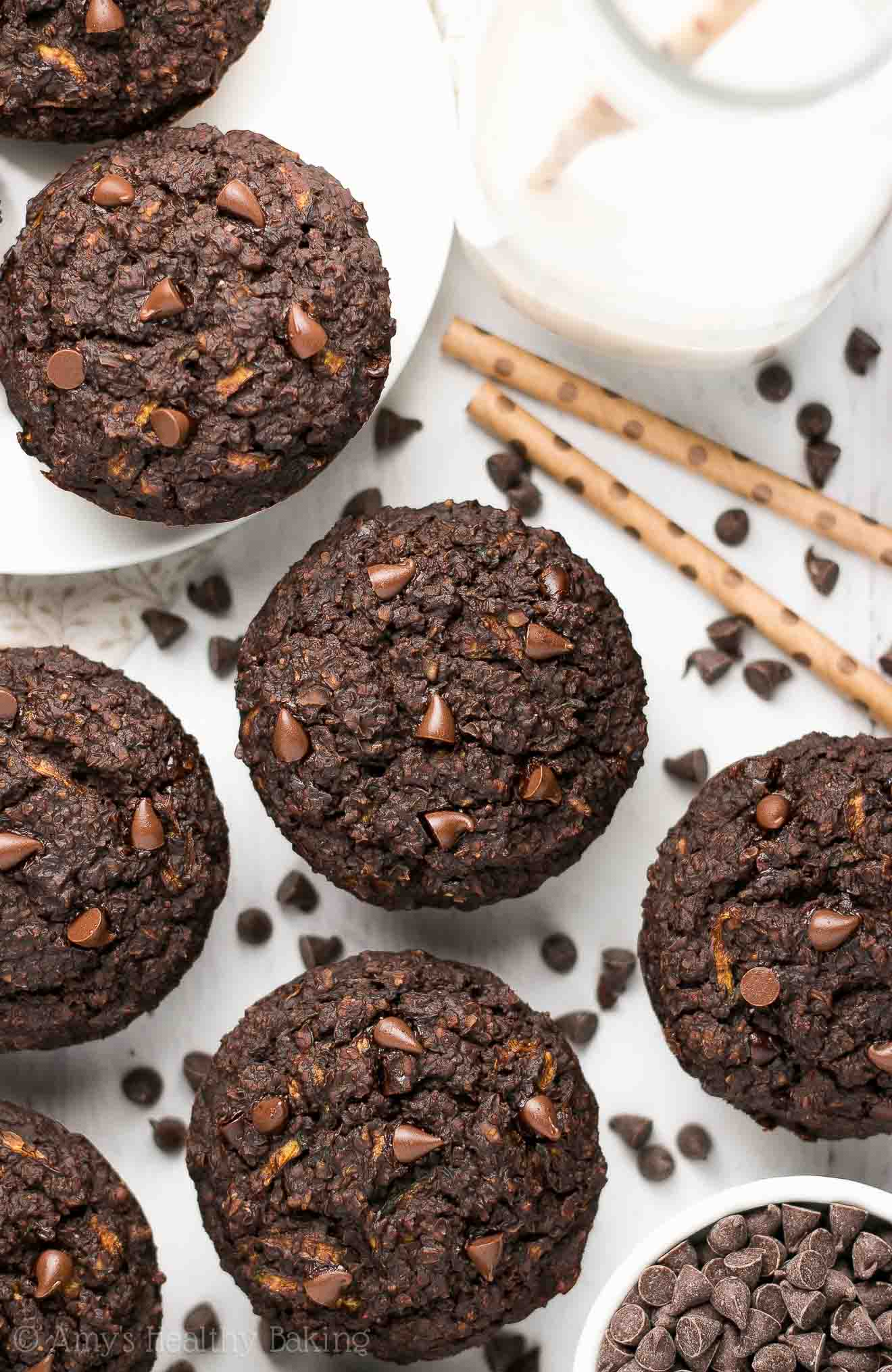 Towards the end of the quarter, the professor held a special session in a different lab on the other side of campus, which housed magnetic machines twice as big—close to two stories tall!—and nearly ten times as sensitive as the ones in the Chemistry Building basement. As a result, they took almost an hour to produce each graph, so we ended up with lots of free time to chat while we waited.

I learned a lot about my classmates during that session, and it turned out that one girl’s parents owned a popular local coffee shop in her Oregon hometown. She explained how she grew up grinding beans and whipping up lattes for the somewhat hipster clientele… 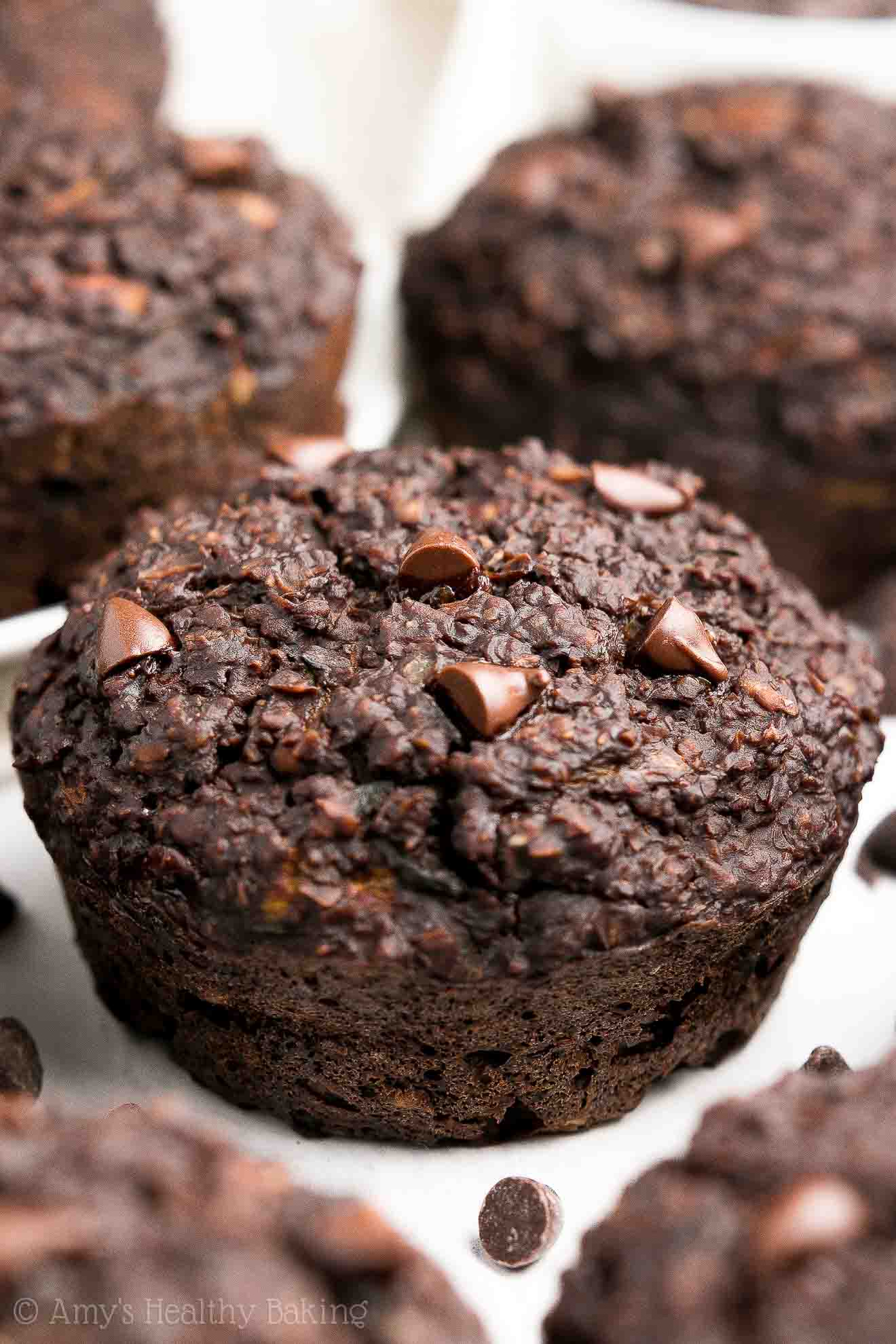 But according to her, none of the bakery items her parents sold were made in-house! They bought all of their bagels, croissants, and jumbo Costco-style muffins from wholesale distributors, but their customers never knew. And the most popular item?

The gigantic double chocolate muffins… With nearly half a day’s worth of calories! 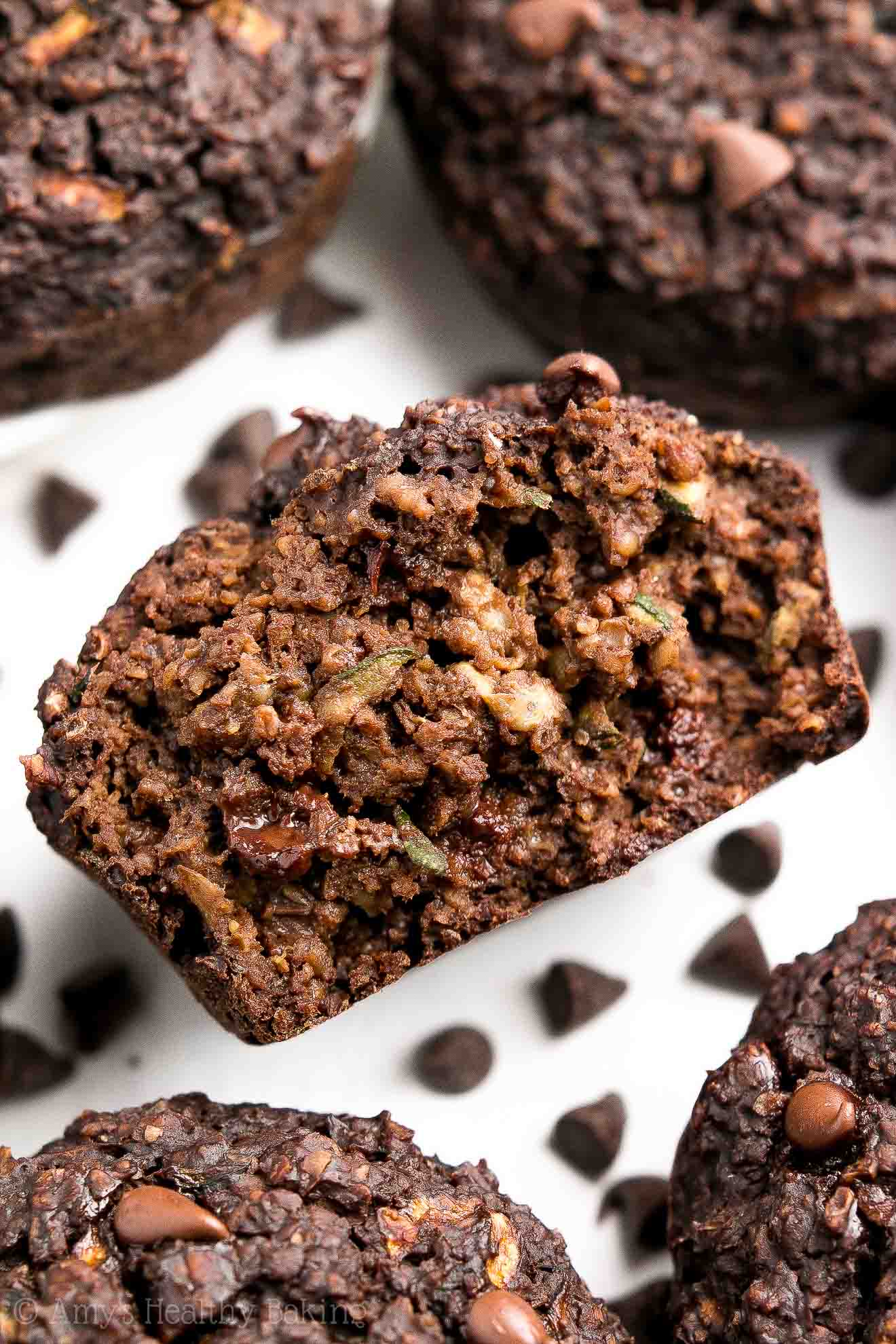 As a huge chocoholic, I completely approved of that flavor as the patrons’ favorite… But in their health-oriented town, I have a feeling these Healthy Double Chocolate Zucchini Bran Muffins would have been an even more popular choice! They’re supremely rich and chocolaty, with a hint of fudginess (like my favorite fudgy brownies!), but they contain no refined flour or sugar and only 105 calories!

To make these healthy muffins, you’ll need a few key ingredients, starting with whole wheat flour (or gluten-free!), oat bran (like this, or the gluten-free version if necessary!), and cocoa powder (this kind!). Just use regular ol’ unsweetened cocoa powder! You’re adding more cocoa powder than flour, so your muffins will already taste extra rich and chocolaty without Dutched or special dark cocoa powder.

However, it’s extremely important that you measure the flour, oat bran, and cocoa powder correctly, using this method or a kitchen scale. (← That’s the one I own and love!) Too much of any of those three will dry out your muffins, especially the oat bran. It acts like a sponge and soaks up tons of liquid from your batter! Too much cocoa powder will also make your muffins taste bitter, rather than rich and dark. 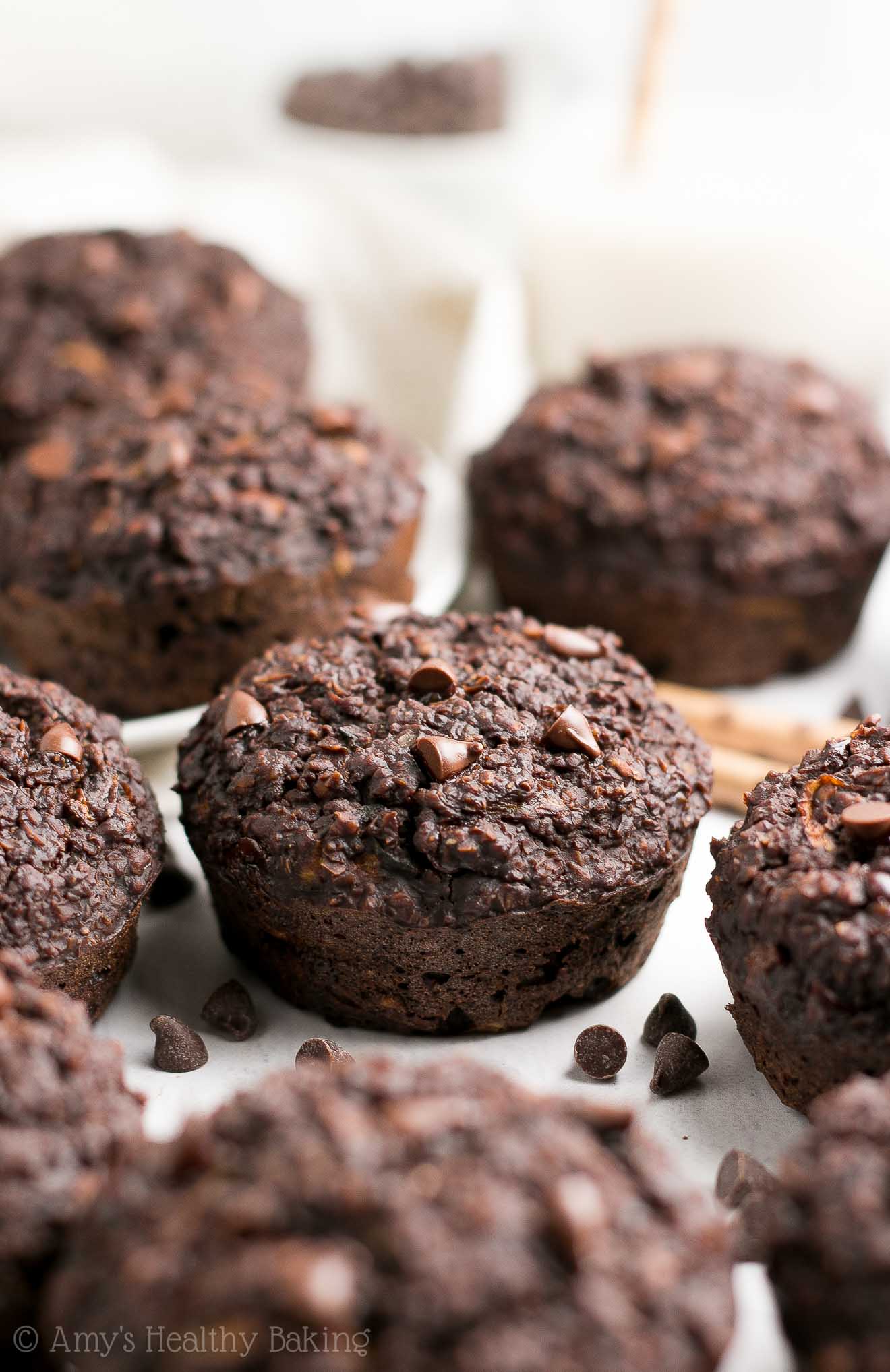 To make these bran muffins really soft and tender without lots of oil or butter (like in traditional recipes!), I have a special trick… You’ll soak the oat bran in some Greek yogurt and milk while measuring and mixing together the rest of the ingredients! This softens the oat bran, just like how my overnight oats recipes work, which makes your muffins perfectly moist. It’s such a great trick!

Bonus: The Greek yogurt adds lots of protein to your muffins, too! It has around 21g per cup! 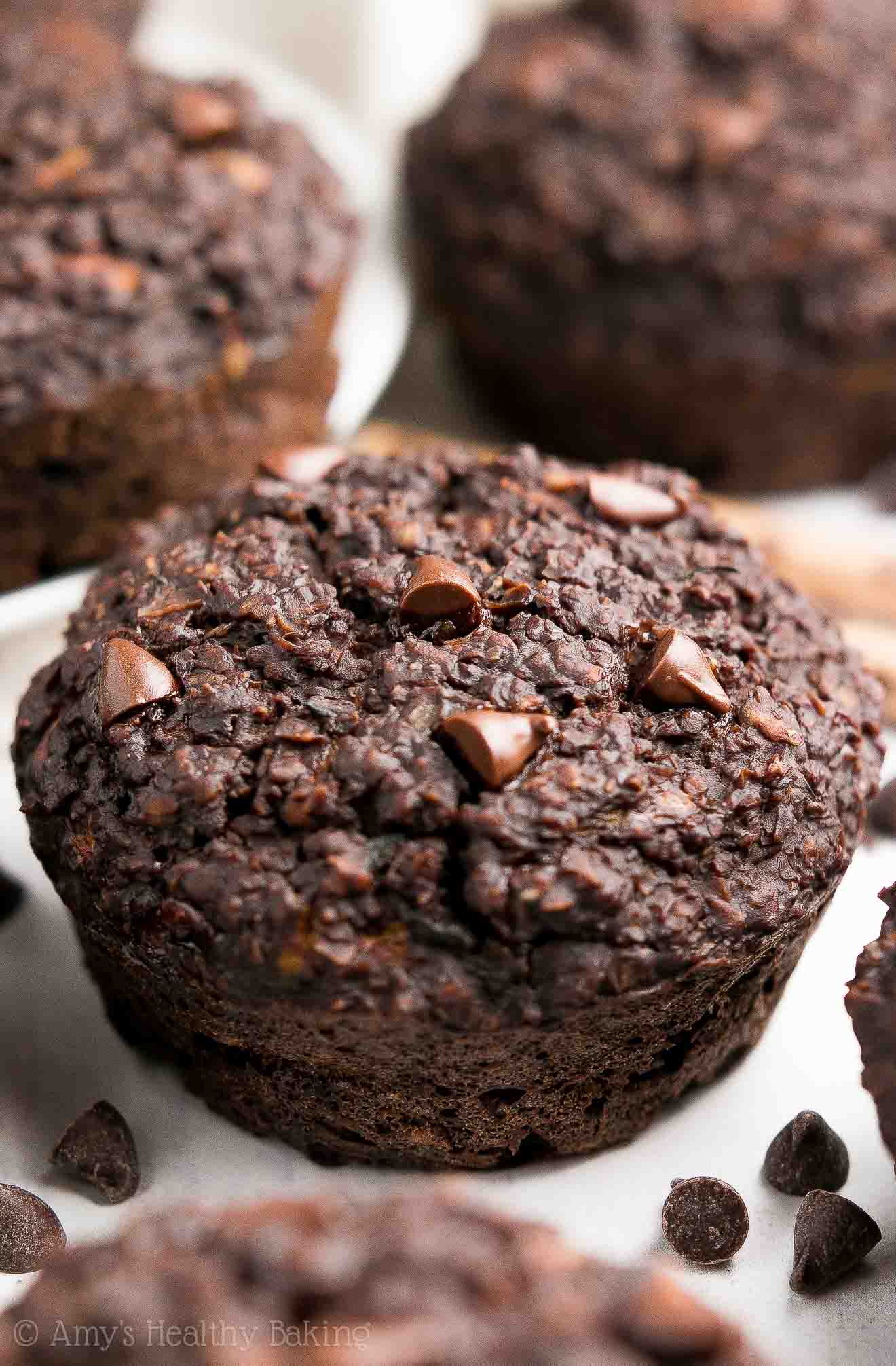 Instead of refined sugar, you’ll sweeten your muffins with a combination of pure maple syrup (like this!) and molasses (this kind!). Molasses is actually what gives bran muffins their iconic taste—cozy, comforting, and a teensy bit earthy—so I don’t recommend substituting anything for it! Molasses is shelf-stable and keeps for ages, and you’ll use it in all of these recipes of mine, too! (This is the kind that I use!)

Of course, we can’t forget the zucchini and mini chocolate chips! (I’m obsessed with these!) Remember to thoroughly pat your zucchini dry with paper towels before stirring it into the batter. This removes the excess moisture. If you skipped this step, the zucchini would release all of that moisture into the muffin batter while baking… And that would cause your muffins to completely collapse while cooling!

Then for a finishing touch, I always press more mini chocolate chips into the tops of the batter before popping my trays in the oven. How cute and irresistible does that make them look?? 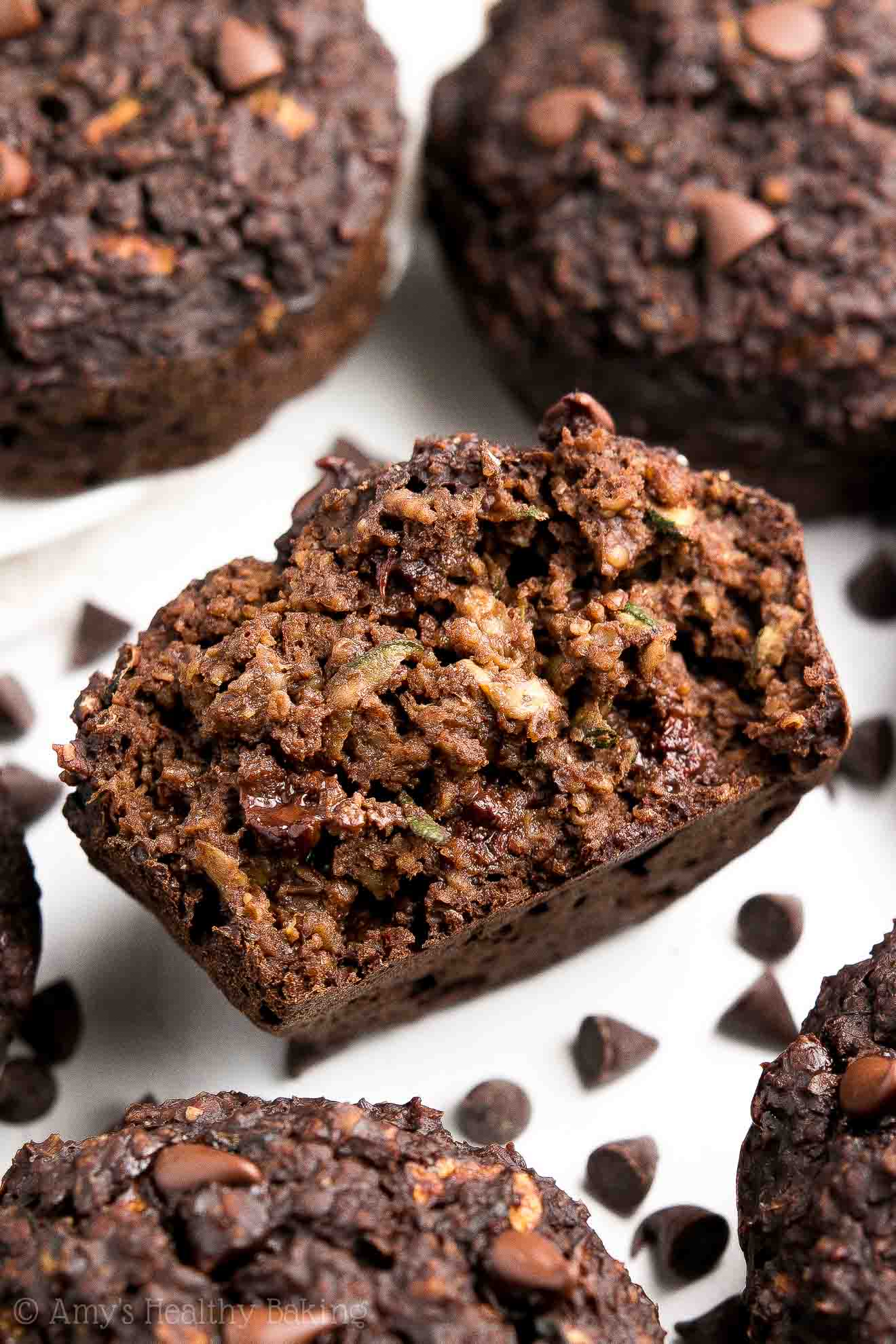 As a huge chocoholic, these are definitely going in my regular breakfast rotation! ♡ And when you make your own, remember to snap a picture and share it on Instagram using #amyshealthybaking and tagging @amyshealthybaking IN the photo itself! (That guarantees I’ll see your picture! ?) I’d love to see your muffins!

Click here to PIN the recipe and save it for later!
Yields: 12 muffins
As a family of chocoholics, these muffins are always a huge hit at my house! They’re full of rich chocolate flavor, similar to 70% dark chocolate, thanks to cocoa powder and mini chocolate chips… And the hearty oats combined with lots of Greek yogurt give them a slight fudgy texture, just like my favorite fudgy brownies! Leftovers will keep for at least one week if stored in an airtight container in the refrigerator, and they also freeze really well.
Notes: Other readers have had success substituting wheat bran for the oat bran. I have not tried that myself and cannot personally vouch for that substitution. If you decide to try substituting wheat bran, measure by volume (cups) not weight (grams).

Remember to measure the oat bran, cocoa powder, and flour correctly with this method or a kitchen scale. (← That’s the one I own and love!) Too much of any of these ingredients will make your muffins dry (especially the oat bran; it acts like a sponge and soaks up so much liquid!). Too much cocoa powder will also make your muffins taste bitter, rather than rich and chocolaty.

Additional cinnamon may be substituted for the allspice, if you don’t have allspice.

Honey or agave may be substituted for the maple syrup. Do not substitute pancake syrup because it will not produce the same taste or texture. I don’t recommend substituting anything for the molasses; it’s required to produce the iconic bran muffin flavor. (This is the kind I use, and you'll use it in all of these recipes of mine, too!)

Measure the zucchini before patting it dry. You must pat it dry to remove the excess moisture because that excess moisture will cause the muffins to collapse while cooling. To pat the zucchini dry, lay a double-thick layer of paper towels onto a cutting board, and arrange the freshly shredded zucchini on top. Place another double-thick layer of paper towels on the zucchini, and gently press down until the top towel turns completely wet.

The Healthier Chocolate Treats cookbook is perfect for any and all chocolate lovers. Whether you enjoy chocolate occasionally or every single day (that’d be me!), there are plenty of goodies inside for you! Healthier Chocolate Treats contains 50+ brand new healthier recipes. These recipes have never been seen before or appeared on my blog. You won’t find them anywhere else! And yes—every single one contains some form of chocolate. Whether you prefer milk, dark or white, there are lots of treats inside for you!     What Inspired You to Write Healthier Chocolate Treats? I have always loved chocolate. Every Halloween throughout my childhood, I inverted the entire contents of my bright … END_OF_DOCUMENT_TOKEN_TO_BE_REPLACED