Learn how to make this easy healthy breakfast quick bread that tastes like oatmeal raisin cookies! It’s really tender with lots of cozy spices & just 121 calories!
Click here to PIN the recipe and save it for later! 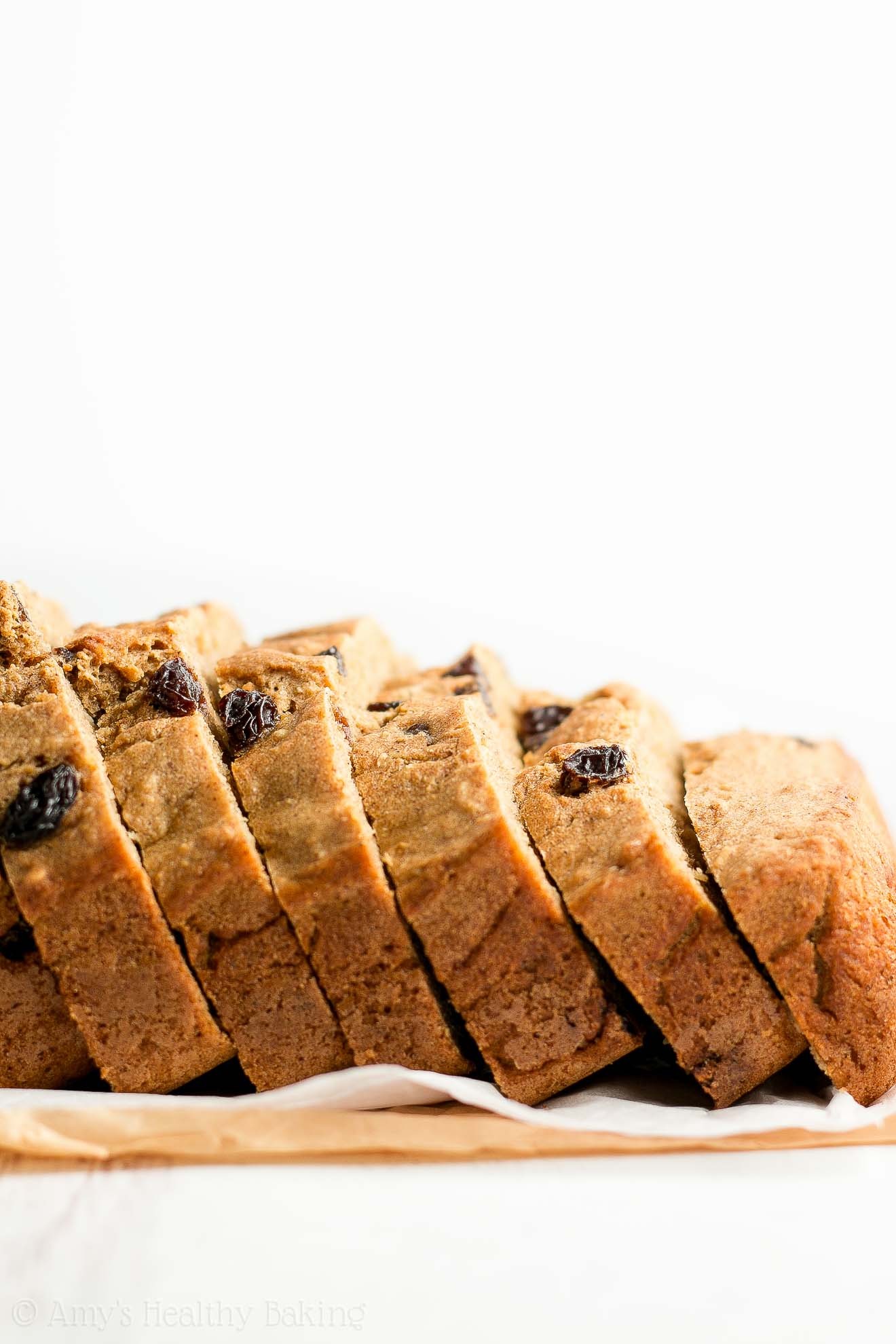 During my first year of graduate school, I started making oatmeal for breakfast when the weather turned cooler. There was something that felt so cozy and satisfying about enjoying a hot breakfast after returning from a run in the brisk autumn air… Especially when it took barely any effort to make!

I’d pour quick-cooking oats and water into a bowl, along with a little sweetener, and pop that in the microwave. Less than two minutes later when the timer rang, I’d stir in a generous amount of cinnamon (I love it as much as chocolate!), and sometimes I added in some fresh fruit or raisins. 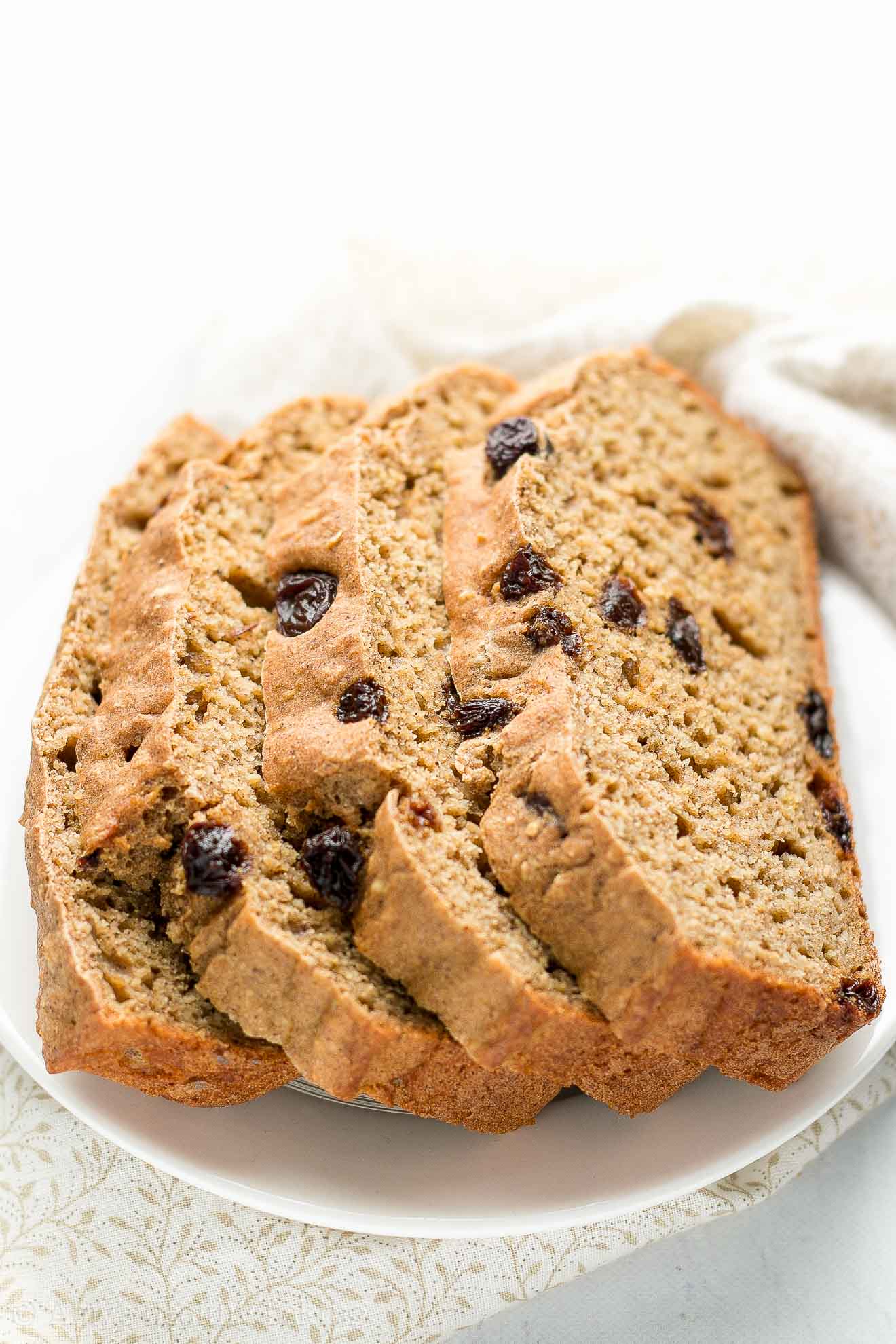 When the next term began, I had to sign up for classes that started between 7:30 and 8 am nearly ever day of the week, which barely gave me enough time to exercise and shower before running out the door. As a result, I traded my bowls of oatmeal for a banana and a tupperware of dry cereal or an English muffin with peanut butter.

I needed something portable that I could easily take to campus, and back then, I just couldn’t figure out a way to do that with my “oatmeal cookie” breakfast bowl! 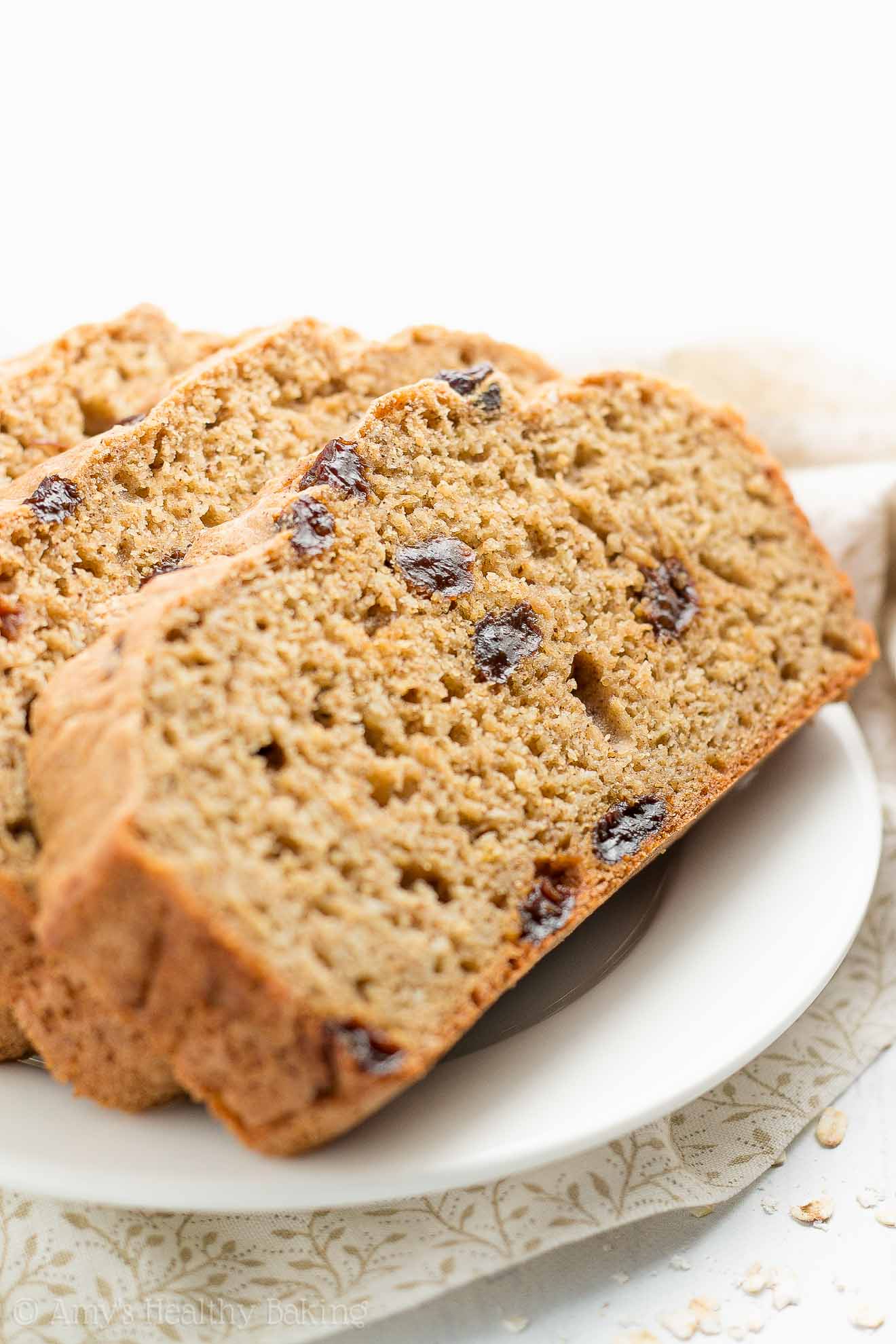 Finally, too many years later, I came up with a solution… This Healthy Oatmeal Raisin Breakfast Quick Bread! With its tender texture and lots of cozy spices, it still tastes like oatmeal raisin cookies (hooray!), and it’s really easy to cut a slice or two as a healthy-yet-portable breakfast. This quick bread is also perfect for make-ahead breakfast meal prepping, if your schedule is as busy as mine was during that second term! 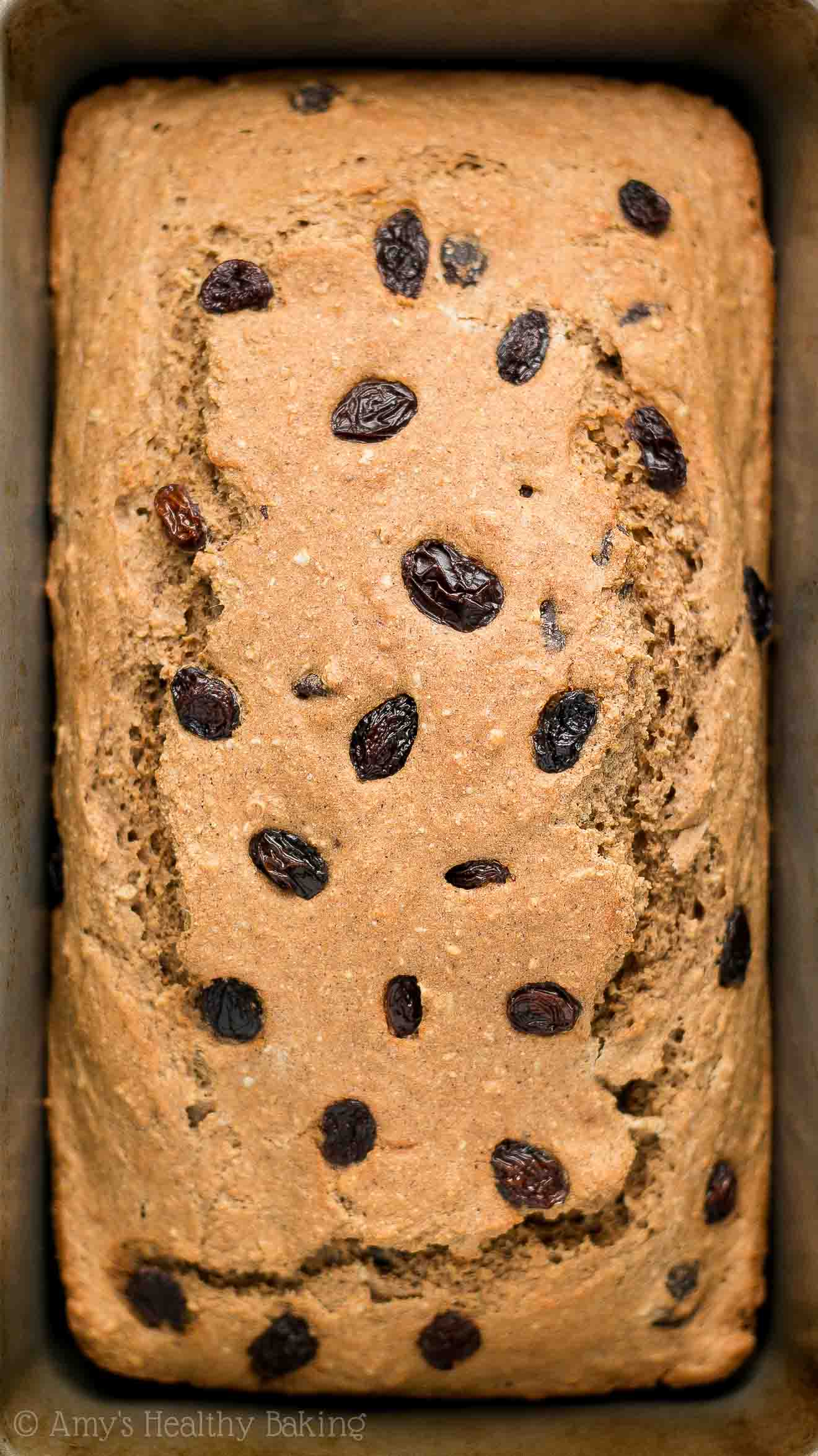 Let’s go over how to make this healthy breakfast quick bread!

You’ll start by stirring together instant oats (this kind!), Greek yogurt, some milk, and vanilla extract. Instant oats are also called quick-cooking or one-minute oats, and they’re thinner and smaller than old-fashioned oats. You can find them in canisters right next to the regular rolled oats at the grocery store.

Nerd alert! It’s really important to soak your oats in that mixture of Greek yogurt, milk, and vanilla. This step softens the oats ahead of time to give your healthy breakfast bread a more tender texture. It’s the same trick I use in all of my bran muffin recipes, too! 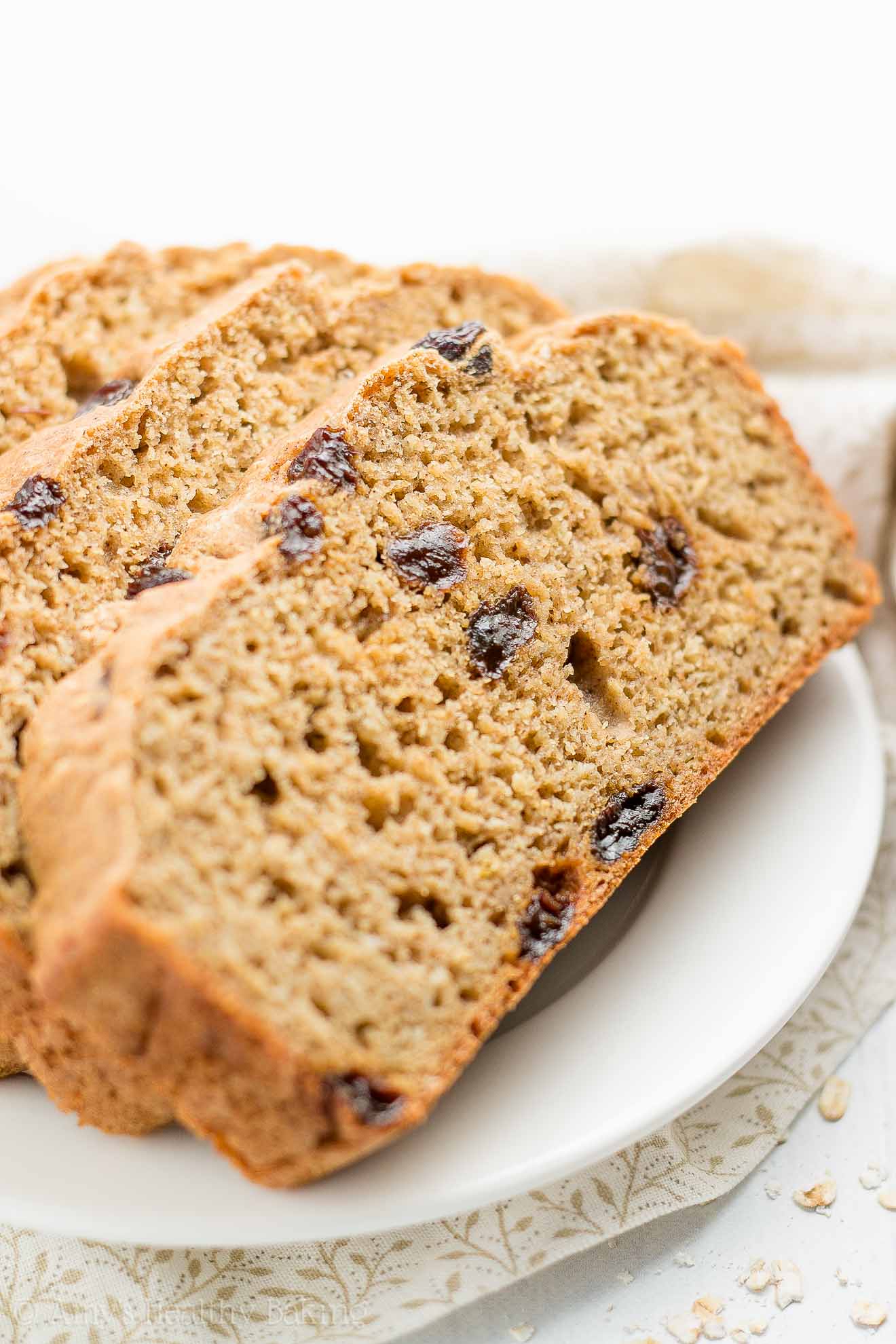 While the oat mixture sits, you’ll prepare the rest of the ingredients. In the second bowl, you’ll whisk together white whole wheat flour (like this!), cinnamon (this is my favorite kind!), nutmeg (like this!), baking powder, baking soda, and salt. The combination of those two spices adds a deep richness and comfort food flavor to this healthy breakfast quick bread—much more so that cinnamon alone would—so don’t skip the nutmeg! 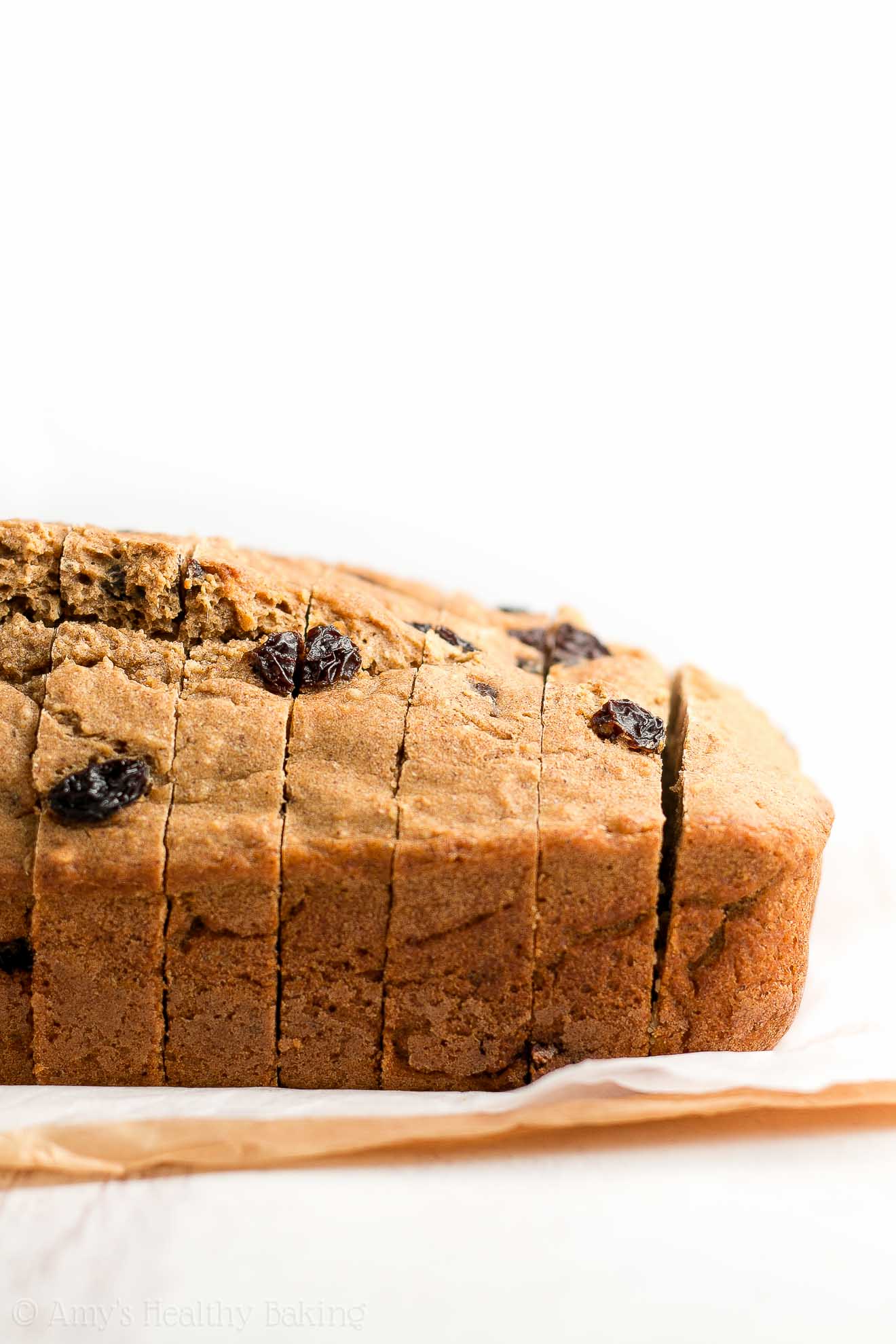 You’ll sweeten your breakfast loaf with one of my favorite ingredients: vanilla stevia. Stevia is a plant-based, no-calorie sweetener that contains nothing refined or artificial (aka it’s clean-eating friendly!), and it’s very concentrated. You just need 1 ½ teaspoons for this entire quick bread! This is the kind I use because I love its warm flavor and don’t notice any strange aftertaste. Although you can find it at many health-oriented grocery stores, I buy mine online here because that’s the best price I’ve found. (And you’ll use it in all of these recipes of mine, too!)

Still with me?? Only one last thing to talk about… The raisins! Unless you bought your raisins yesterday, there’s a very good chance they’ve been sitting in your pantry for a while… And the longer raisins sit, the stiffer and drier they get. Yes—dried fruit often continues to dry out at your house! 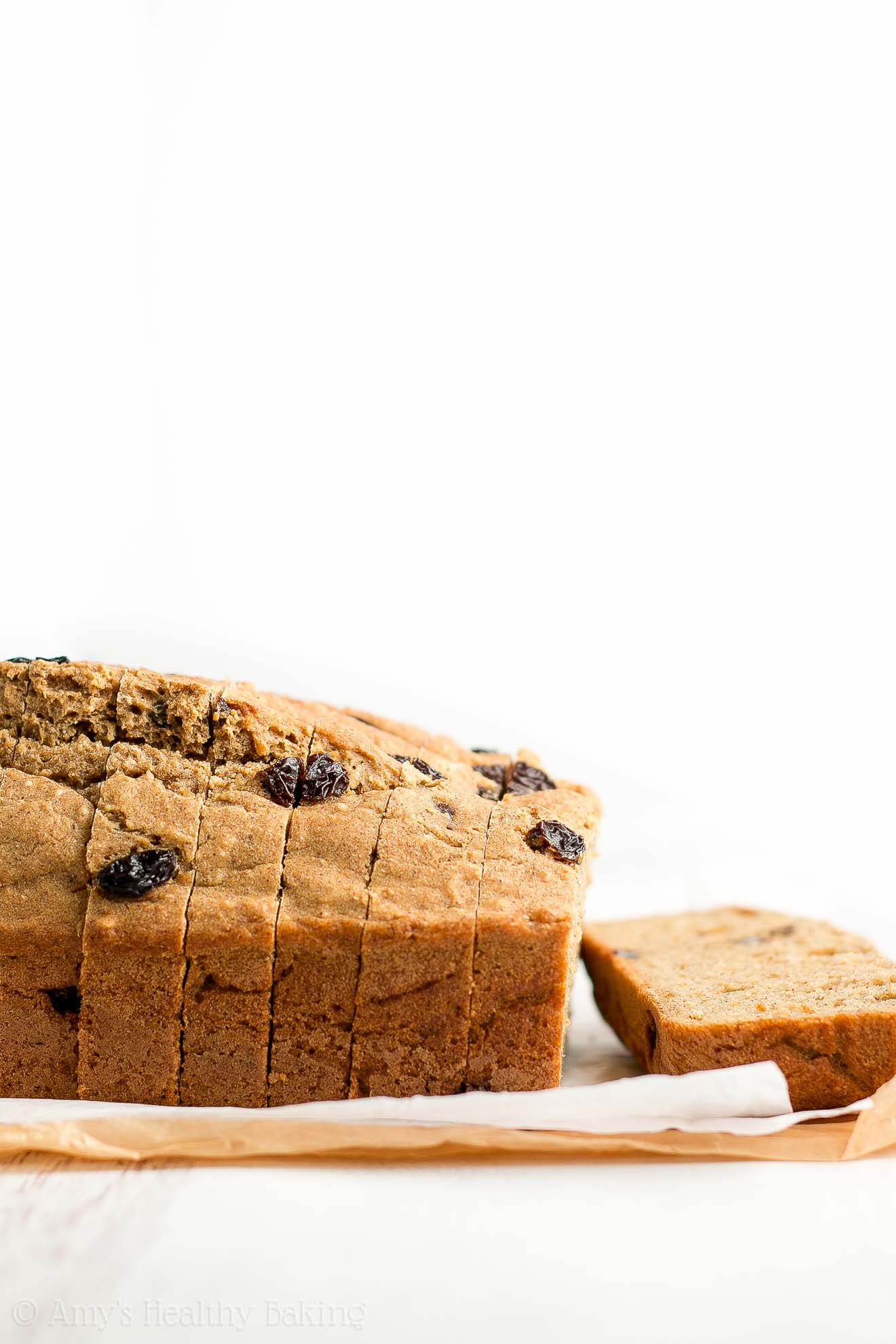 So before you mix them into your batter, hydrate your raisins! This is super easy to do. Add them to a microwave-safe bowl, pour in water until the raisins are fully submerged, tightly cover the top with plastic wrap, and pop that in the microwave for 1 minute. Let the raisins sit for at least 10 minutes while you prepare the rest of the ingredients. Just before adding them to your mixing bowl, drain them—and voila! Really juicy, exceptionally sweet, absolutely irresistible raisins!

There’s a reason the raisins are my favorite part of this healthy breakfast loaf… ? 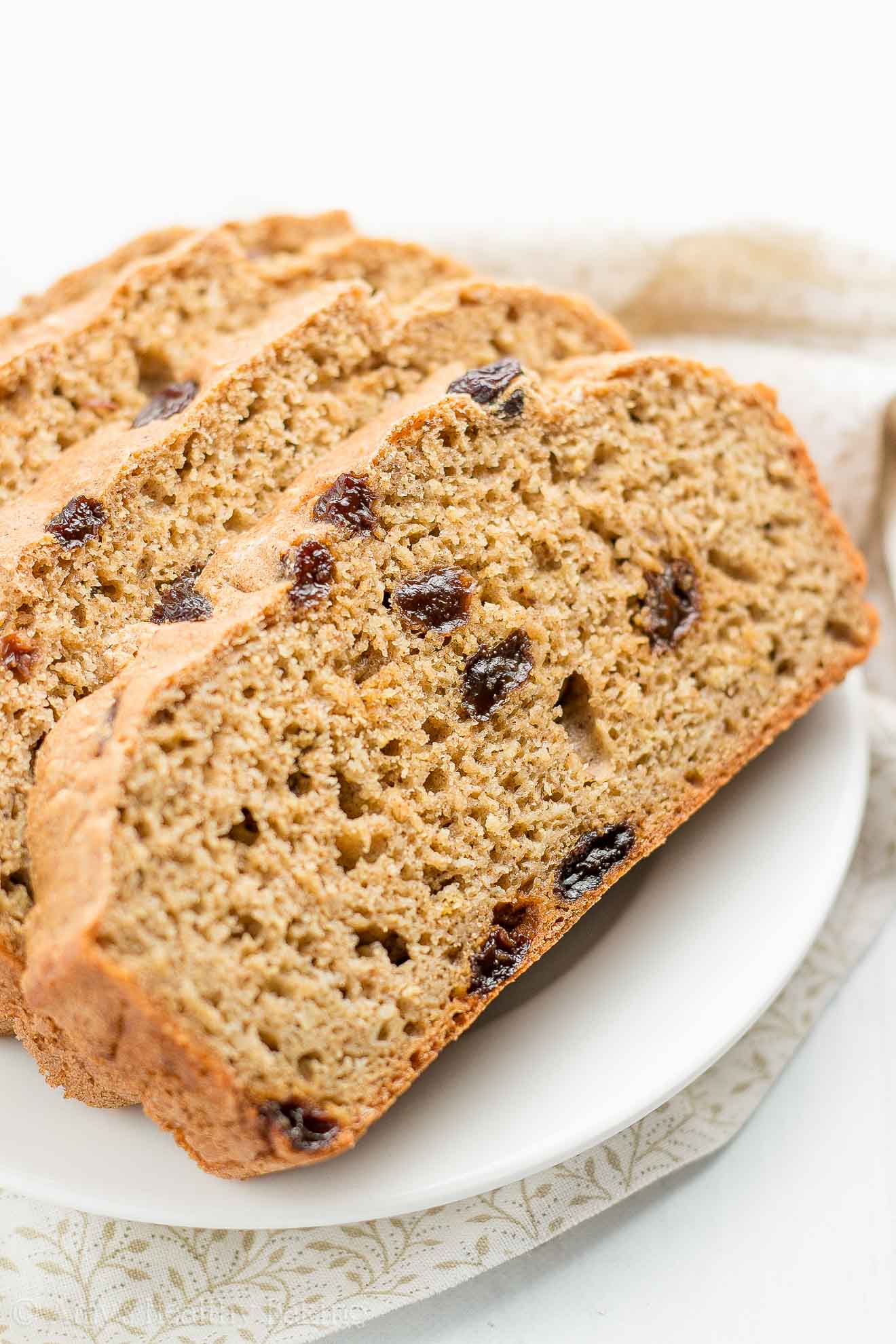 Click here to PIN the recipe and save it for later!
Yields: 1 loaf, 12 slices
This healthy breakfast loaf tastes like oatmeal raisin cookies! It’s really tender with lots of cozy spices, and the raisins add big bursts of sweetness. The quick bread will keep for at least one week if stored in the refrigerator in an airtight container or tightly wrapped in plastic wrap, and individual slices also freeze well.
Notes: Instant oats are also known as “quick-cooking” or “one-minute” oats. They’re smaller and thinner than old-fashioned oats. To make your own out of old-fashioned oats, add ¾ cup (75g) of old-fashioned oats to a blender or food processor, and pulse until they’re ⅛ to ¼ of their original size.

Remember to measure your oats and flour correctly, using this method or a kitchen scale. (← That’s the one I own and love!) Too much of either will make your quick bread turn out dry. This is especially true of the oats because they act like sponges and soak up lots of moisture from the batter.

The quick bread requires 2 full egg whites. The whites contain the majority of the protein in eggs, and that protein is required to ensure the loaf maintains its shape and texture while cooling. Without both egg whites, the loaf will collapse while cooling and turn out much denser.

I do not recommend substituting for the vanilla stevia, if at all possible. (It’s one of my favorite ingredients, and you’ll use it in all of these recipes of mine, too!) I buy mine online here because that's the best price I've found. However, if you really prefer to omit the vanilla stevia from the cake, substitute ¾ cup + 2 tablespoons (120g) granulated sugar, brown sugar, or coconut sugar and reduce the milk to ¾ cup + 1 tablespoon (195mL). You may also substitute ½ cup + 2 tablespoons (150mL) pure maple syrup, honey, or agave and reduce the milk to ½ cup (120mL) instead. The baking time may vary with either of those substitutions as well.

To hydrate the raisins, add them to a microwave-safe bowl, and pour water on top until they’re completely covered. Seal plastic wrap over the top, and microwave the bowl on high for 1 minute. Let the raisins sit while mixing together the batter (at least 10 minutes). Drain the raisins right before mixing them into the batter. This little trick hydrates them so they’re really soft and juicy!

Do not use an electric mixer to mix up the batter. This will result in a dense or tough cake. Use a whisk where instructed, and use a fork for everything else.

The Healthier Chocolate Treats cookbook is perfect for any and all chocolate lovers. Whether you enjoy chocolate occasionally or every single day (that’d be me!), there are plenty of goodies inside for you! Healthier Chocolate Treats contains 50+ brand new healthier recipes. These recipes have never been seen before or appeared on my blog. You won’t find them anywhere else! And yes—every single one contains some form of chocolate. Whether you prefer milk, dark or white, there are lots of treats inside for you!     What Inspired You to Write Healthier Chocolate Treats? I have always loved chocolate. Every Halloween throughout my childhood, I inverted the entire contents of my bright … END_OF_DOCUMENT_TOKEN_TO_BE_REPLACED