Learn how to make these elegant eggnog cupcakes from scratch! It’s easier than you think! They’re only 130 calories with no refined flour or added sugar too!
Click here to PIN the recipe and save it for later! 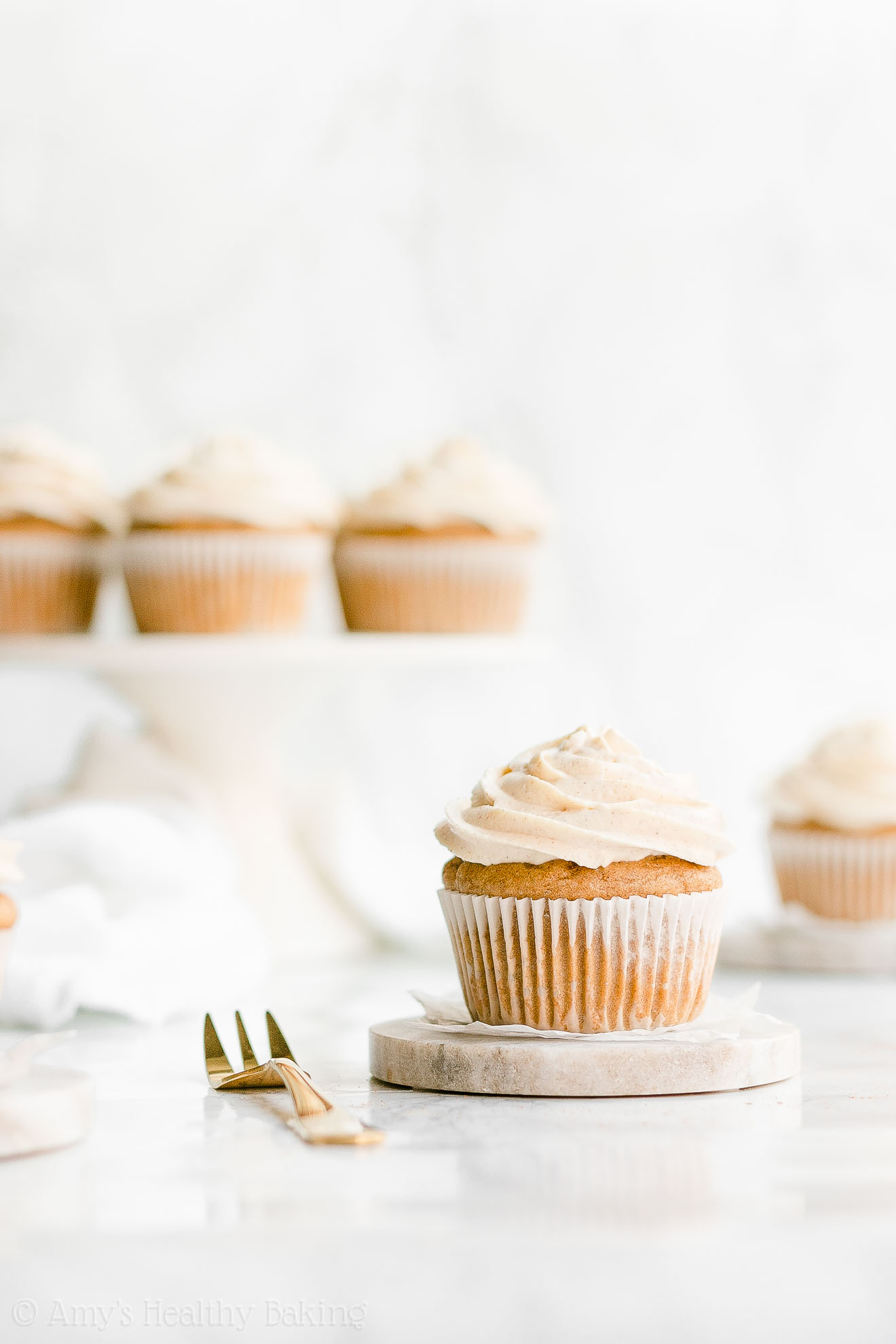 A few years ago in early December, my mom’s birthday landed on a Saturday, so my dad and I treated her to an afternoon and evening of fun. We let her pick out the activities she wanted to do, which led us to the neighboring town.

We started by walking around “the house with a bazillion lights” (as my brother and I called it during our childhood!), one of the most impressively decorated houses during the holidays in our area. Afterward, we drove downtown for birthday dessert.

A couple of weeks earlier, I had walked past a little French patisserie a few doors down from the movie theater, and after browsing through their menu online, I suggested it to Mom. I know how much she loves Paris and thought it’d be the perfect dessert place for her! 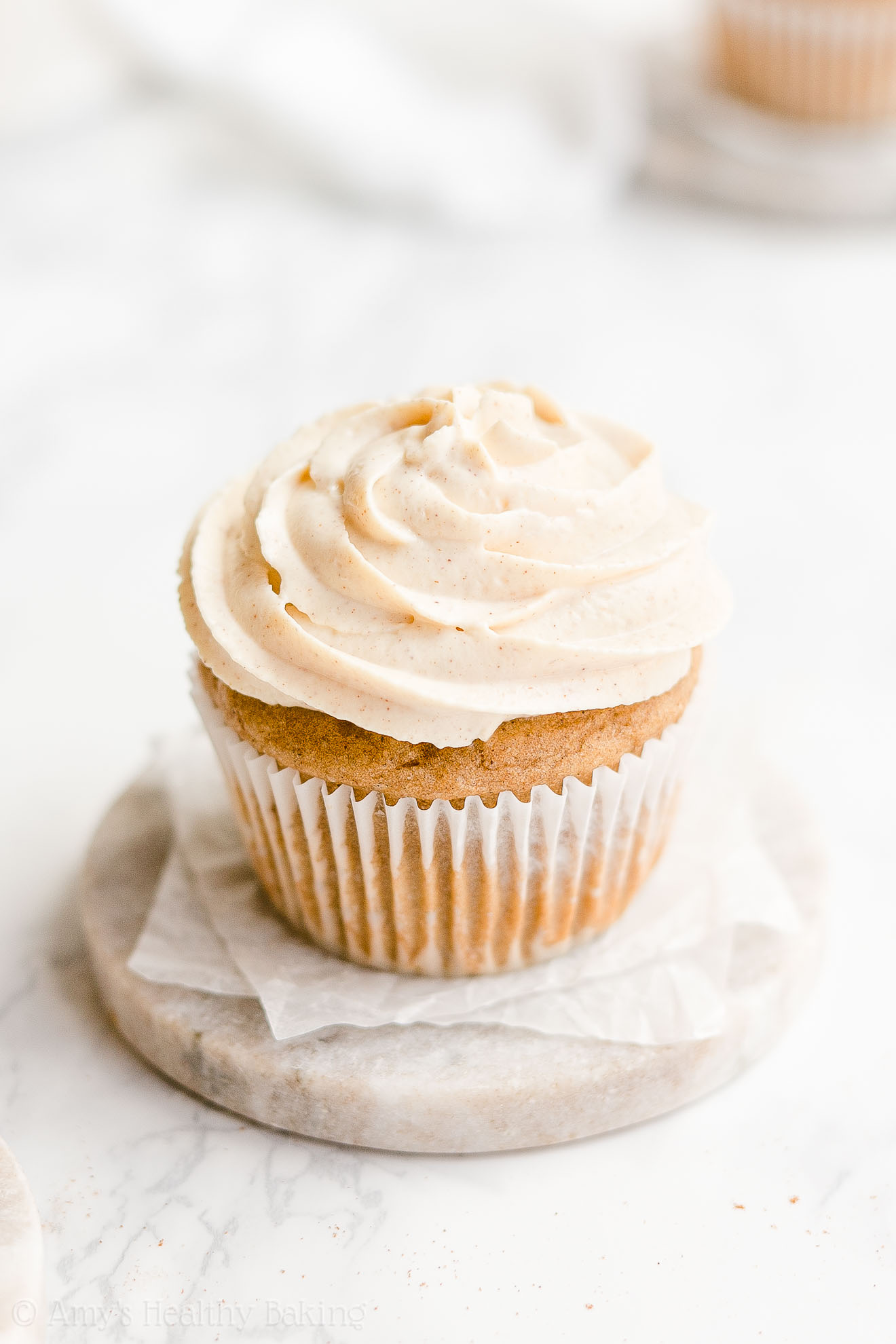 Once inside, we took our time looking through their glass display cases full of sweets, strolling back and forth at least three times before picking out some treats. We settled on five small desserts to split between the three of us, and after paying at the register, we carried our plates over to one of the dainty white tables and chairs to enjoy.

As two big chocoholics, Mom and I both selected a really rich and chocolaty treat, and Dad actually did the same too. We also purchased two others with fruit and caramel flavors, and none of us could pick a favorite between all five. They all tasted amazing… And made us want to take another Paris vacation!

Because I moved to Southern California last year, I won’t be able to simply drop by for my mom’s birthday this year, but I still wanted to do something sweet in honor her. So I turned her favorite holiday flavor into a special birthday dessert… 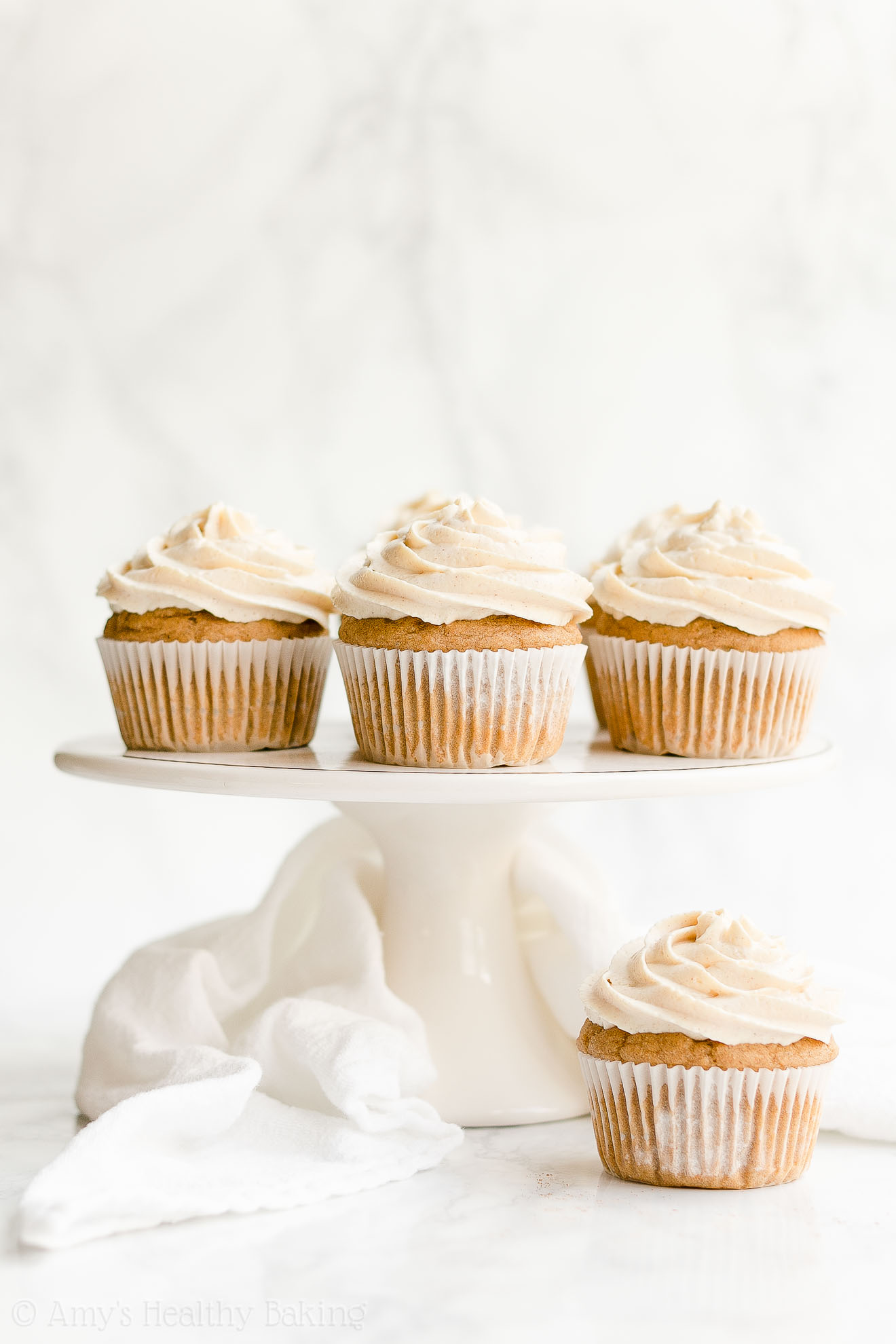 These Healthy Eggnog Cupcakes! They’re really moist and tender, and they taste just like the holidays with lots of sweet eggnog and warm spice flavors. Yet unlike traditional cupcakes, these contain no refined flour or added sugar and just 130 calories!

I think that would make Mom really happy!

(And don’t worry! I actually planned ahead and gave her an early birthday card and present when my family visited for Thanksgiving. ?) 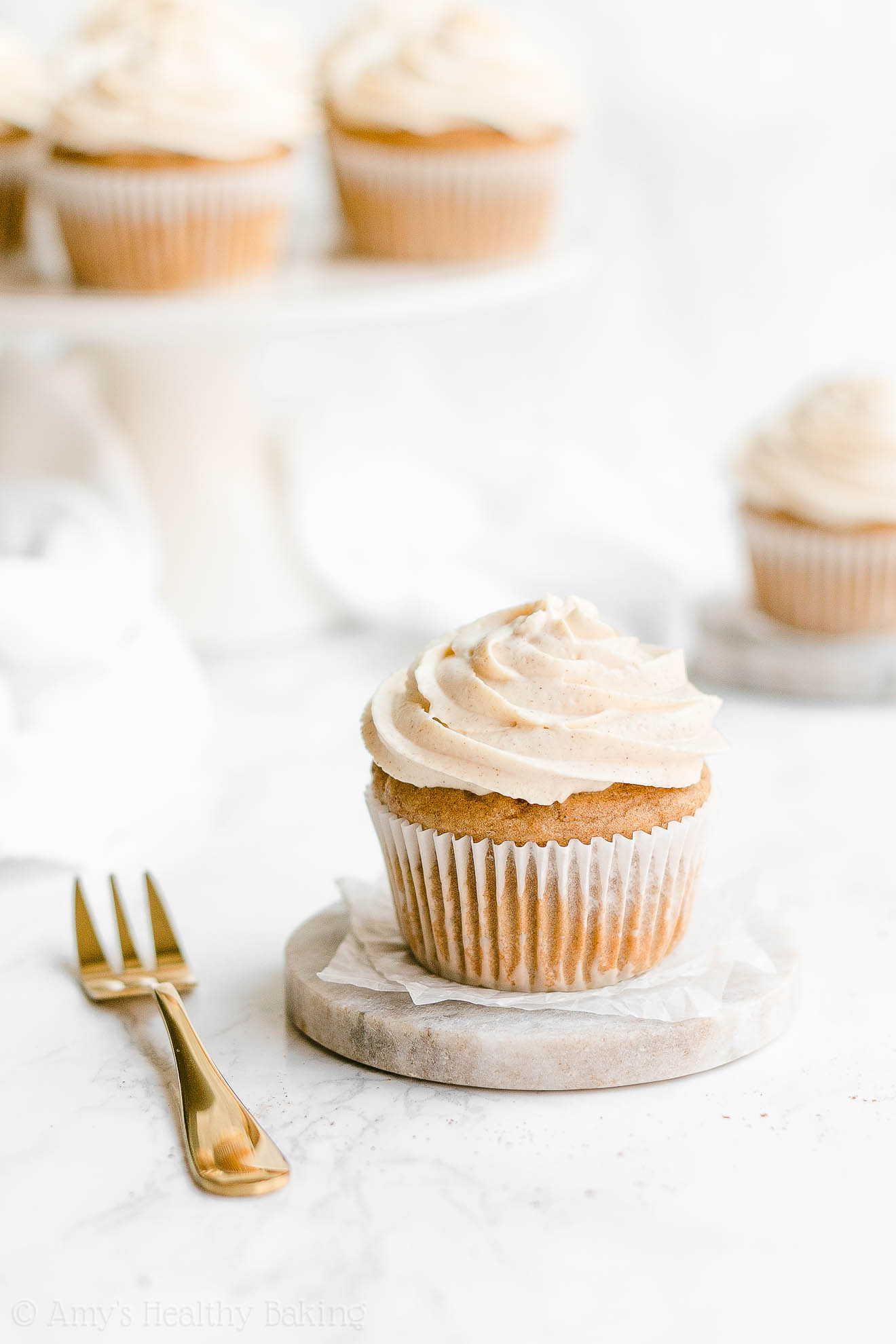 So let’s go over how to make these healthy eggnog cupcakes!

To make the batter, you’ll start with white whole wheat flour and two spices, cinnamon and nutmeg. It’s nearly impossible to make eggnog-flavored treats without nutmeg, and Mom always sprinkles a bit into each small glass she drinks during the holidays. Such a perfect pair! 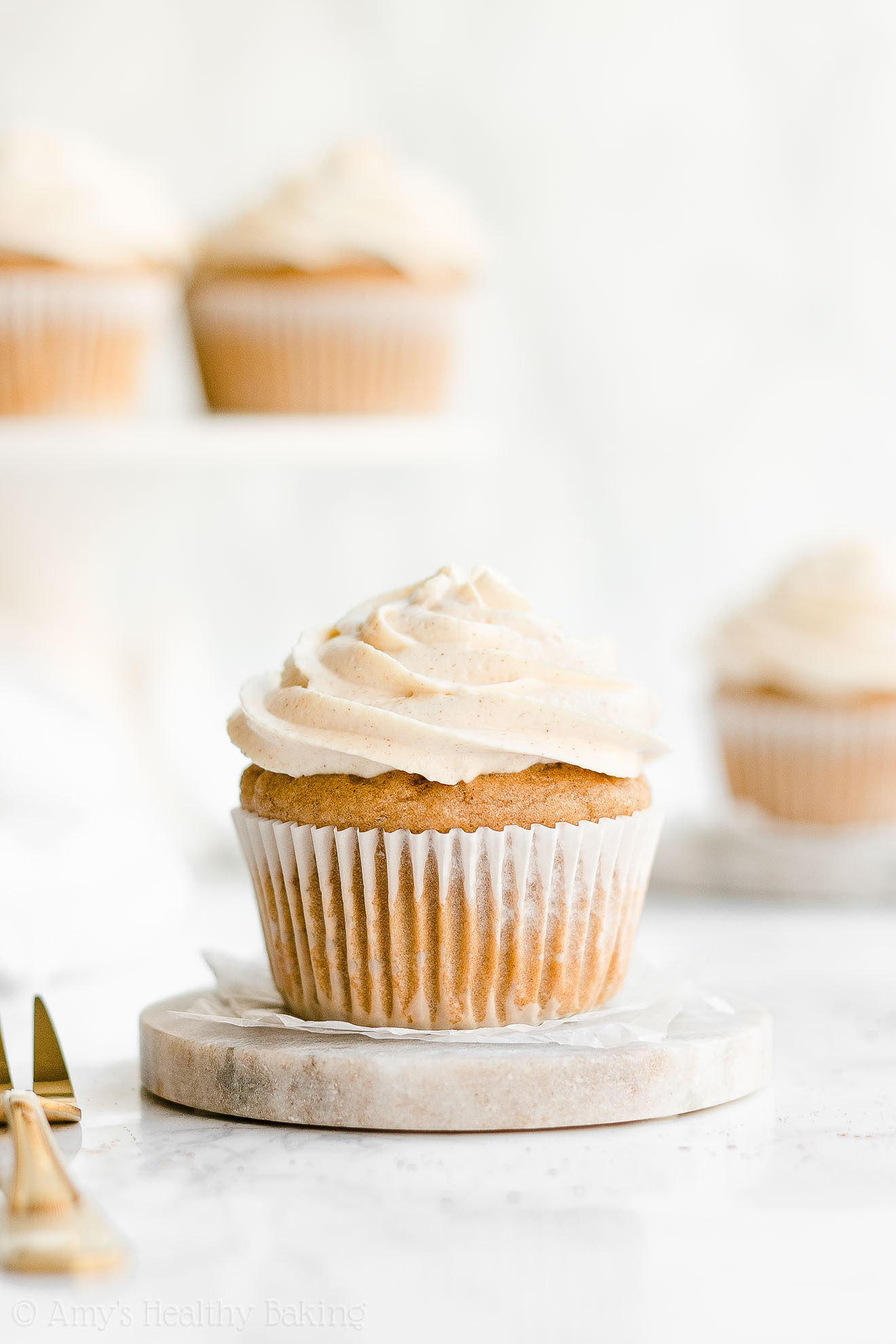 Then they get the rest of their moist and tender texture from one of my favorite baking ingredients! If you’ve browsed through my recipes before, then you probably know what it is…

Greek yogurt! It adds the same moisture to your cupcake batter as extra butter or oil but for a fraction of the calories, and it also gives your healthy eggnog cupcakes protein boost. I call that a win-win! 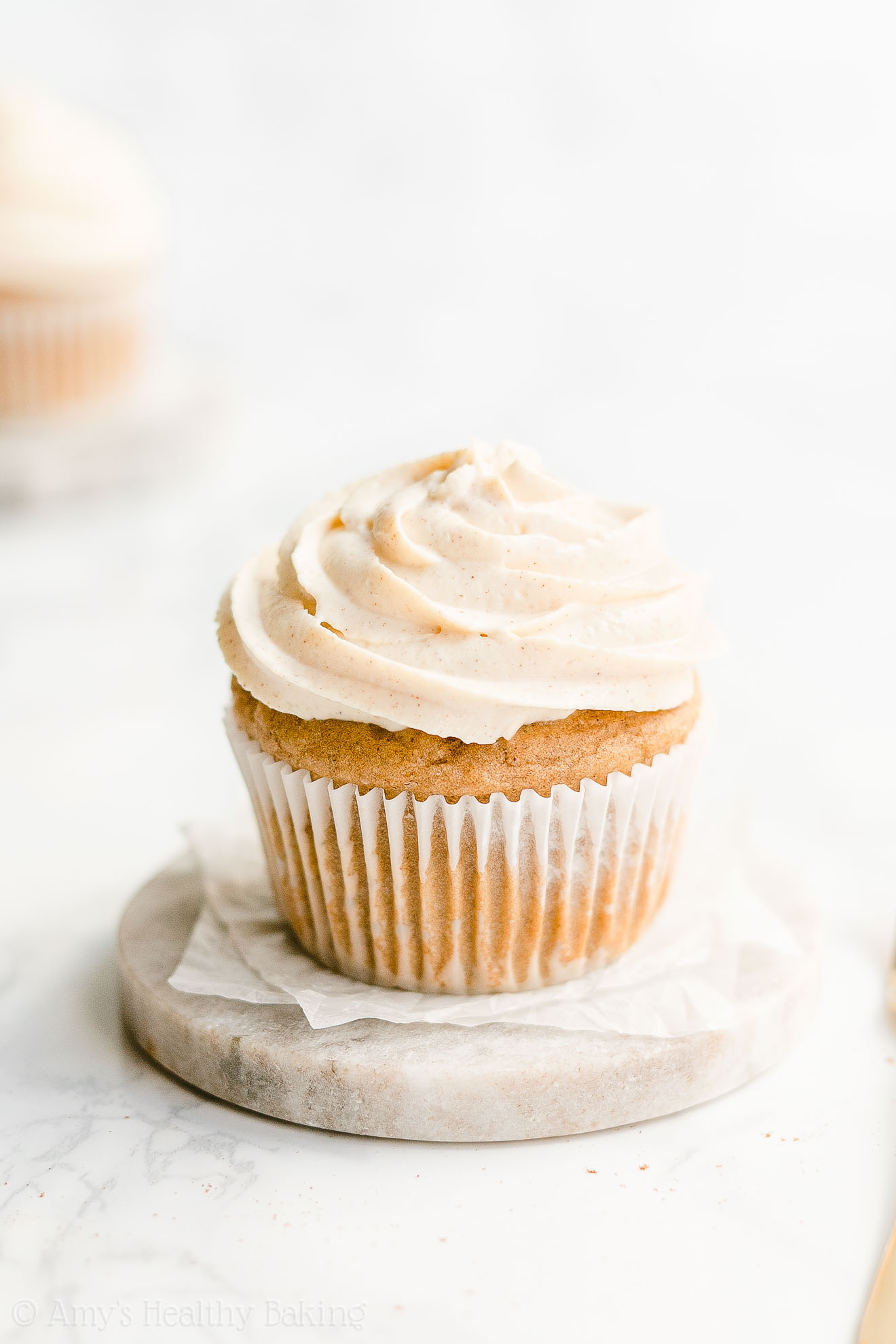 Time to sweeten the batter! You’ll actually use a combination of two sweeteners: liquid stevia and granulated erythritol.

Stevia is a plant-based, no-calorie sweetener that contains nothing refined or artificial (aka it’s clean eating friendly!). It’s also highly concentrated. You just need 4 teaspoons for these cupcakes! This is the kind I use because I don’t notice any strange aftertaste, and I buy it online here because that’s the cheapest price I’ve found. (And you’ll use it in all of these recipes of mine, too!)

Just like stevia, erythritol is also a sweetener that comes from plants. It generally sweetens cup-for-cup like granulated sugar, so you’ll add more than the concentrated liquid stevia. This is the one I use!

I try really hard to only use one sweetener in my recipes to keep things simple, but I found that using just liquid stevia didn’t work. Even when I added more than 4 teaspoons, I couldn’t get the cupcakes to taste sweet enough, but using the erythritol completely solved that issue. Instead of tasting like muffins, these healthy eggnog cupcakes definitely taste like sweet bakery-style cupcakes!

So pretty pretty please… Use both sweeteners! 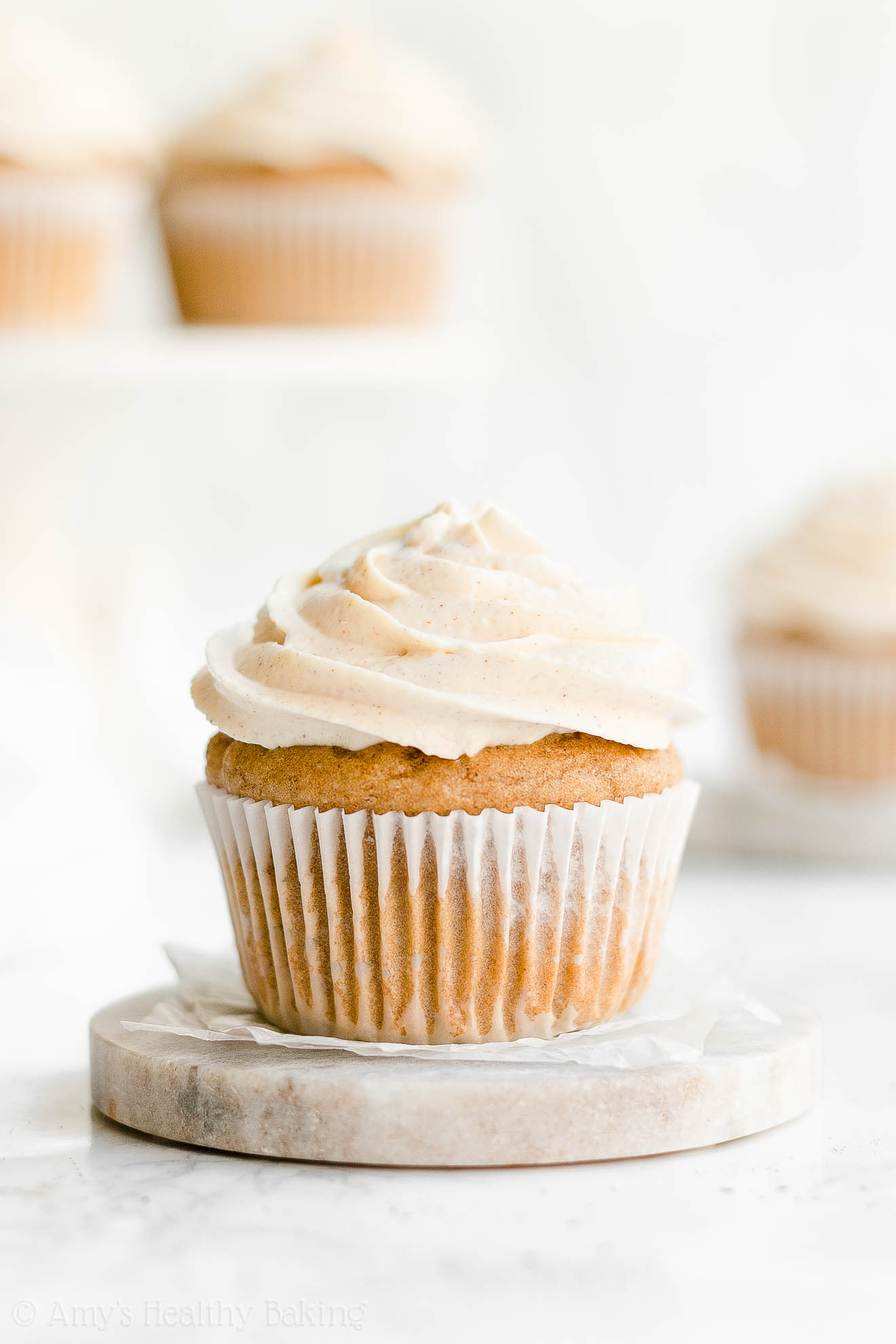 Of course, it’d be impossible to make these without another key ingredient… The eggnog! I actually prefer almond milk “eggnog” (like this one!) compared to traditional eggnog. It has the same iconic flavors but far fewer calories! (And if you still feel a bit weird about drinking eggs like me, it doesn’t actually contain any eggs—just almond milk!)

One last tip about these healthy eggnog cupcakes before we move on to the frosting! Because low fat batters like this one tend to stick to cupcake liners like superglue, you must coat your cupcake liners with cooking spray. This little trick allows the liners to peel away much more easily! Pretty nifty, right? 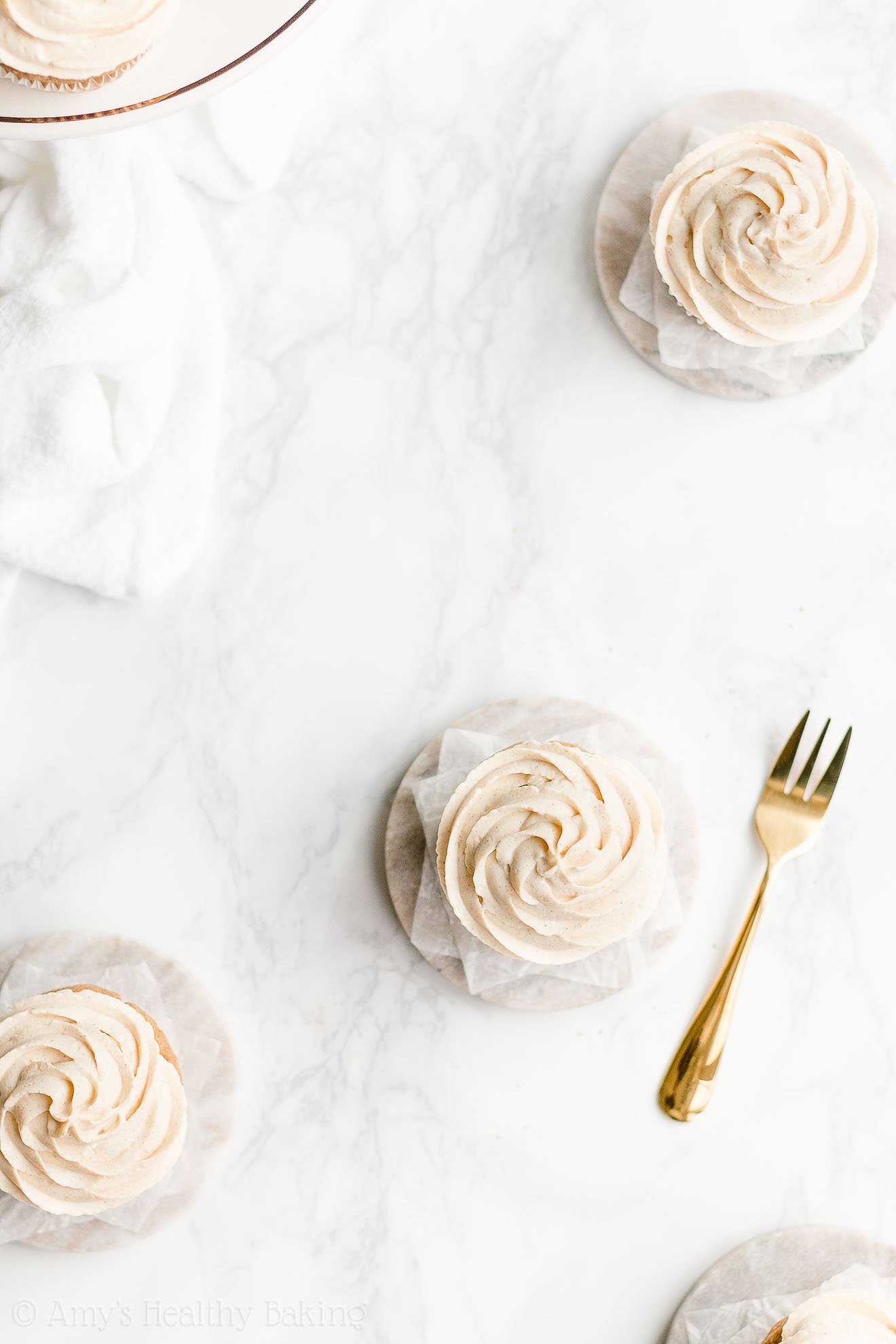 So now that your healthy eggnog cupcakes are in the oven, it’s time to make the healthy cinnamon frosting! Yup, cinnamon. Because eggnog cupcakes + spiced frosting = YUM.

And you’ll start with… More Greek yogurt! Protein-packed frosting is one of my favorite things. ? Then you’ll mix the Greek yogurt with cinnamon, more liquid stevia, and instant pudding mix.

Now all that’s left to do is transfer your creamy cinnamon Greek yogurt frosting to a bag, pipe those gorgeous swirls on top of your healthy eggnog cupcakes… 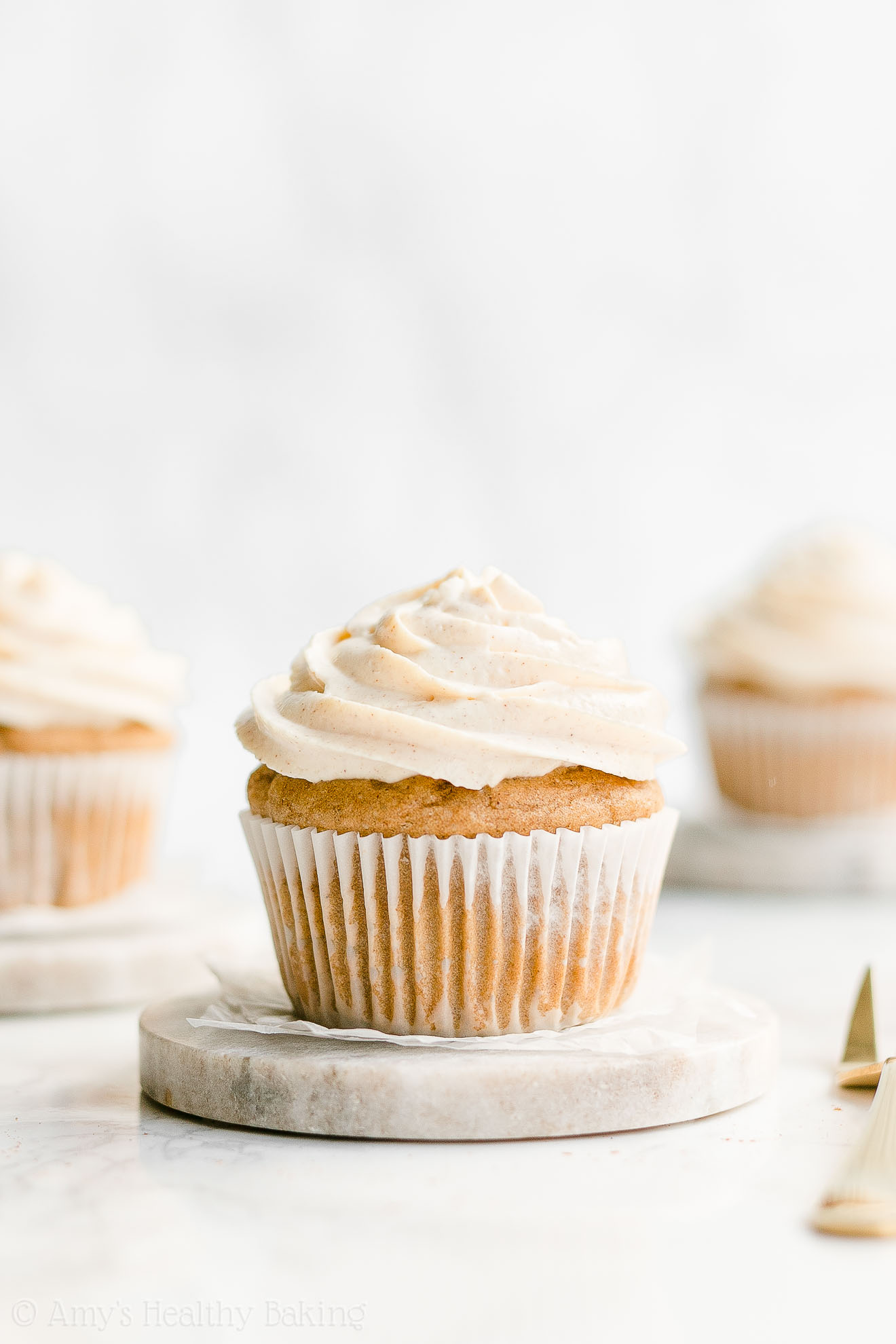 And try to stop after eating just one! (If you can figure out how, let me know… I always seem to reach for seconds!) ? And when you make your own, remember to snap a picture and share it on Instagram using #amyshealthybaking and tagging @amyshealthybaking IN the photo itself! (That guarantees I’ll see your picture! ????) I’d love to see your healthy eggnog cupcakes!

Click here to PIN the recipe and save it for later!
Yields: 12 cupcakes
These cupcakes are such a fun treat for the holidays! They’re full of sweet eggnog and warm spice flavors, and the creamy cinnamon frosting is a lovely finishing touch. The cupcakes are best if eaten the same day they’re frosted, but leftovers will keep for at least three days (if not longer!) if stored in an airtight container in the refrigerator.
Notes: For the gluten-free flour, use the following blend: 1 cup (120g) millet flour, ¾ cup (90g) tapioca flour, ¾ cup (90g) brown rice flour, and 1 ½ teaspoons xanthan gum. Most store-bought gluten-free flour blends (like this one!) should work as well, if measured like this.

I highly recommend using the liquid stevia! It’s one of my favorite ingredients (you’ll use it in all of these recipes of mine!), and I buy it online here because that’s the cheapest price I’ve found. I do not recommend substituting for it in the cupcake batter. If you do, you’ll need to reduce the amount of eggnog to compensate, and your cupcakes won’t taste like eggnog as a result. If you prefer not to use the liquid stevia in the frosting, then substitute 1 ½ teaspoons of this powdered stevia OR ¼ cup of granulated sugar.

I buy my erythritol online here. If you prefer not to use erythritol in the cupcakes, substitute 6 tablespoons (72g) of granulated, brown, or coconut sugar.

I actually prefer using vegan almond milk nog in these cookies! This is the one I found at Target, and it tastes just like regular eggnog. Both vegan eggnog and light eggnog work equally well, so use whatever you prefer!

The Healthier Chocolate Treats cookbook is perfect for any and all chocolate lovers. Whether you enjoy chocolate occasionally or every single day (that’d be me!), there are plenty of goodies inside for you! Healthier Chocolate Treats contains 50+ brand new healthier recipes. These recipes have never been seen before or appeared on my blog. You won’t find them anywhere else! And yes—every single one contains some form of chocolate. Whether you prefer milk, dark or white, there are lots of treats inside for you!     What Inspired You to Write Healthier Chocolate Treats? I have always loved chocolate. Every Halloween throughout my childhood, I inverted the entire contents of my bright orange jack-o-lantern bucket … END_OF_DOCUMENT_TOKEN_TO_BE_REPLACED