Learn how to make these traditional Irish soda bread scones from scratch! This is the easiest homemade bread recipe you’ll ever make! Only five ingredients and 77 calories with no butter, oil, eggs, refined flour or sugar!
Click here to PIN the recipe and save it for later! 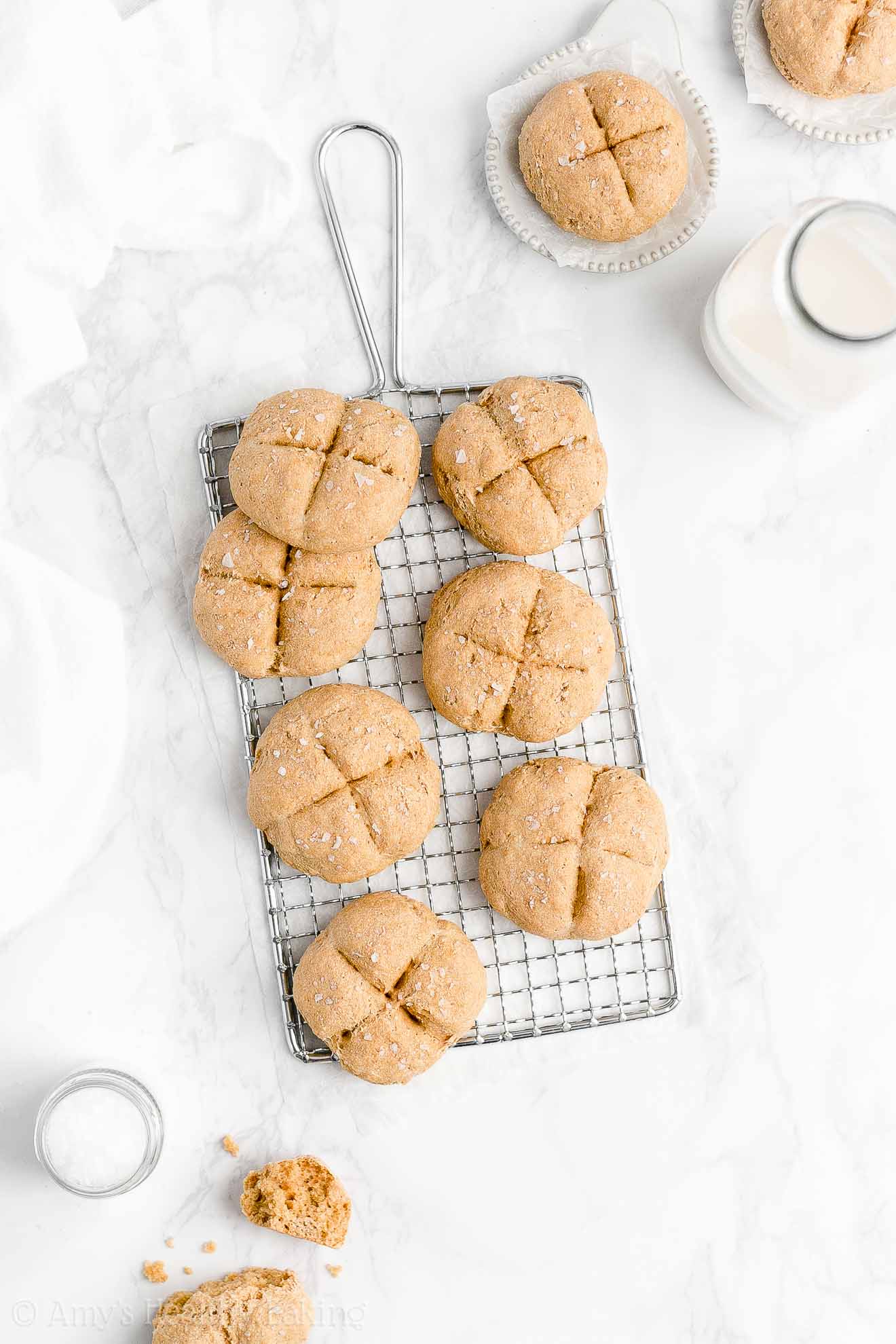 In January, an email from my friend Lindsay (she runs Veggie Balance!) popped up in my inbox. Since I hadn’t seen her for nearly three years, I eagerly opened it, and after a few quick exchanges, we decided to set up a virtual coffee date to properly catch up. 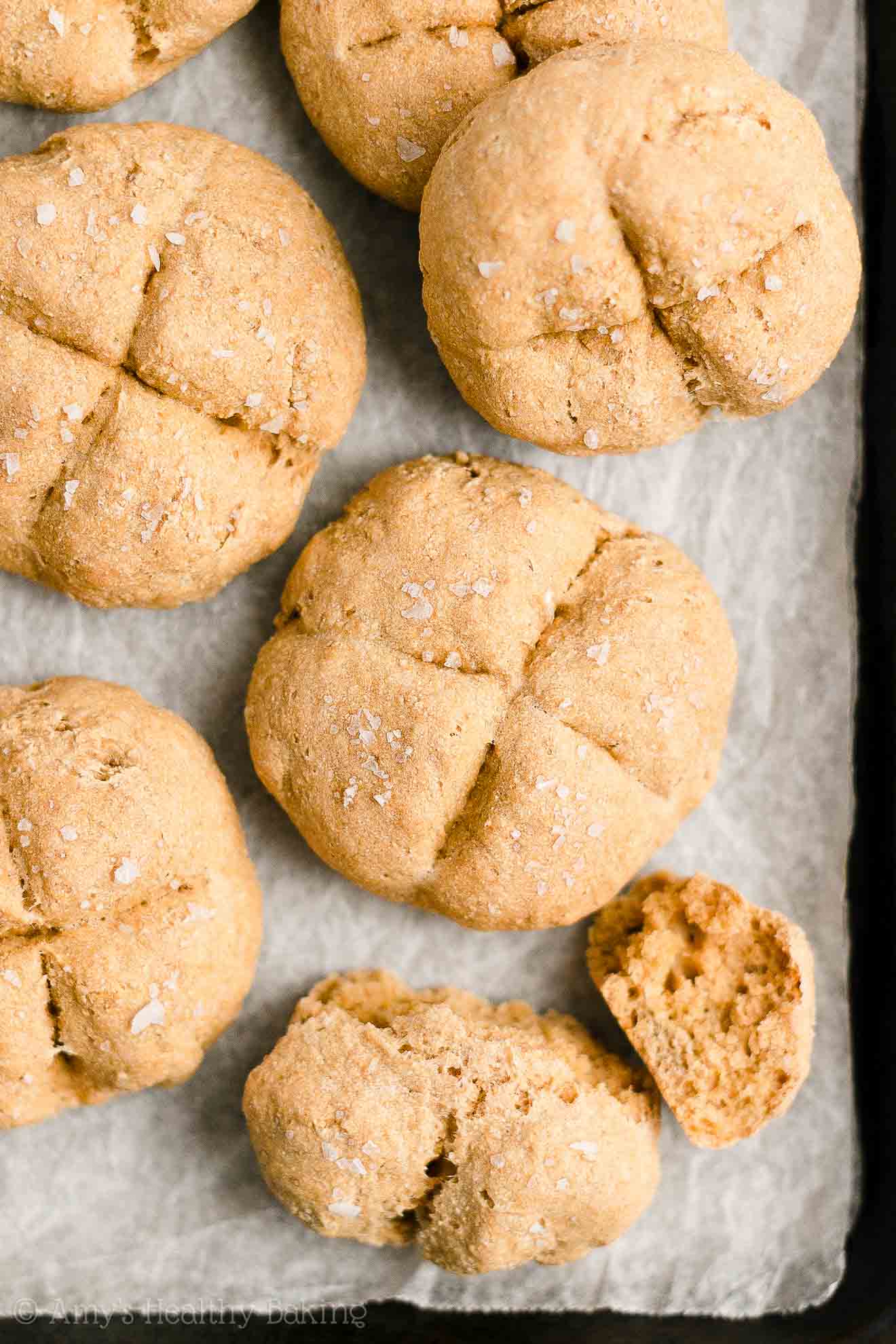 She had moved from the eastern US to Ireland, which meant an eight-hour time difference between her new home and mine in Southern California!

Once we figured out a day that worked for both of us, we hopped onto our computers. It took a few minutes for technology to start working, but then time flew by and we ended up talking for over two hours. It felt like only a few days had passed since we last spent time together, not almost three years! 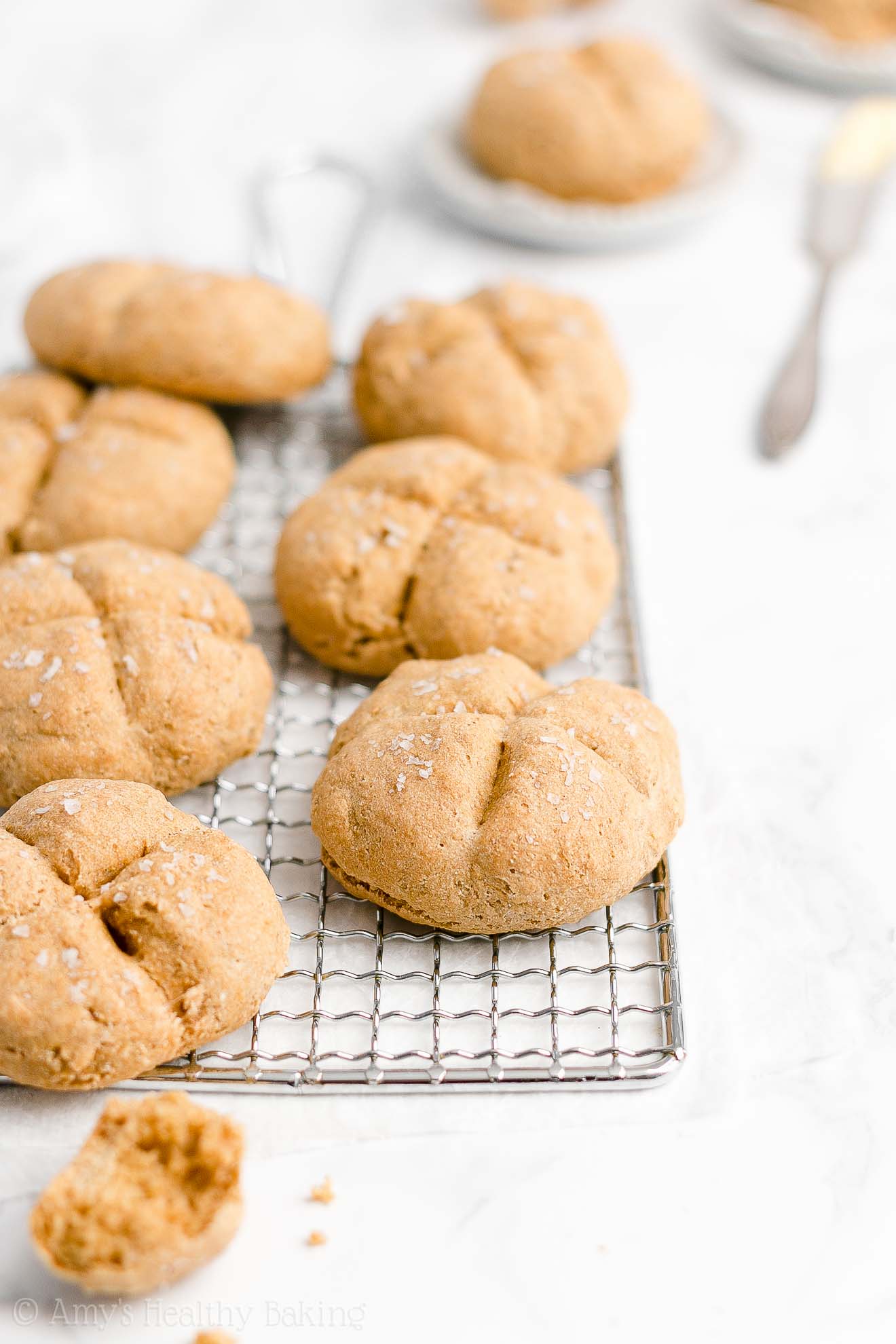 She filled me in on everything going on in Ireland, along with the major culture and food differences they had noticed: public transportation was prevalent everywhere, so they didn’t need a car; people bicycled all the time, even in many of the major cities; winters were warmer and rarely experienced snow, a drastic difference from their winters up north in the US; and while she didn’t mind giving up most American food, she occasionally missed ranch dressing on her salads (the Irish version tasted nothing like the original!).

However… I completely forgot to ask about the Irish food she did enjoy! I know very little about their cultural dishes, other than what people cook for St. Patrick’s Day, and I assume most of what I’ve seen for that March holiday here in California is fairly Americanized. 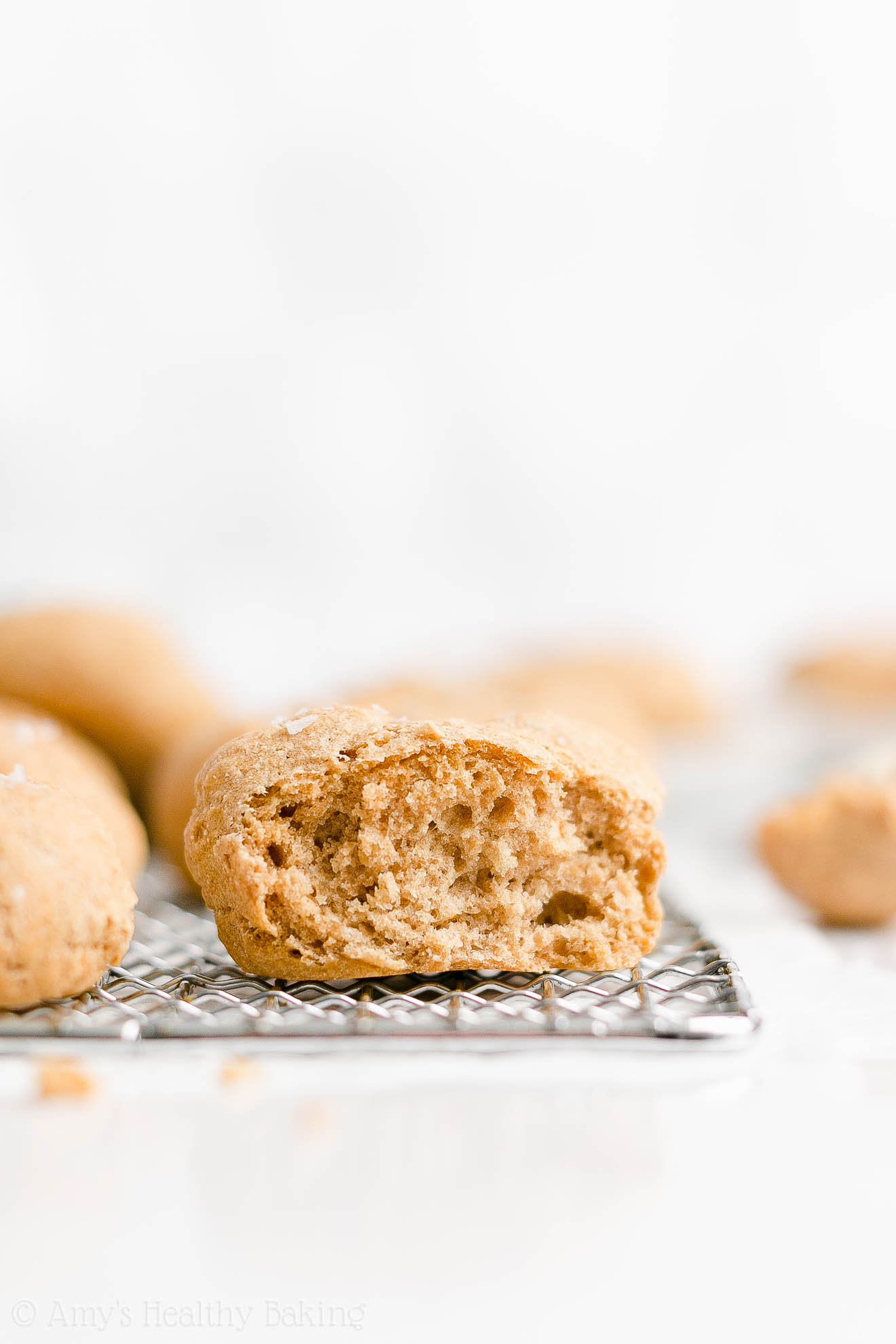 So I decided to do a little research on my own, and upon discovering one of the most well known baked items, I whipped up a batch of these Healthy Irish Soda Bread Scones! They’re supremely moist and fluffy with a lovely hint of soda flavor, and I added a (not quite traditional) sprinkling of flaky sea salt on top for a bright pop.

As soon as I took my first bite, my eyes lit up and I danced around my kitchen. “Why haven’t I been making these every week for, oh gosh, my entire life??” I actually exclaimed out loud (startling my dog by accident!).

They’re so easy… so moist… so yummy… And you just need one bowl and five ingredients, all of which you keep in your pantry already! With less than five minutes of measuring and mixing, you’ll end up with a pan of the most irresistible healthy homemade Irish soda bread… And each scone is just 77 calories! 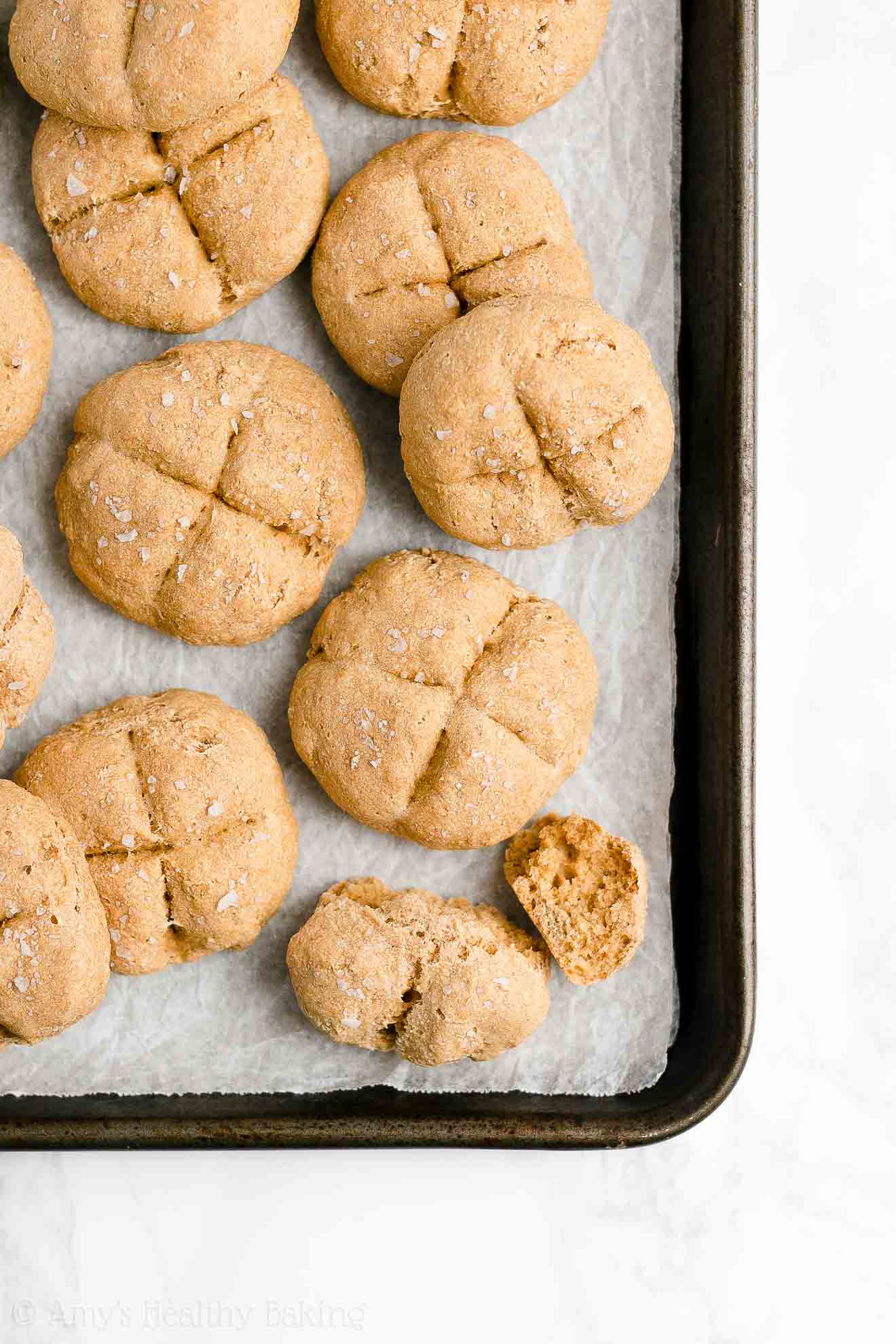 So let’s go over how to make these healthy Irish soda bread scones!

While researching Irish soda bread, I came across multiple recipes variations. When I dug a little deeper, I discovered that the simplest recipes were the most traditional, whereas ones that called for more ingredients were either an Americanized version or what some of the Irish called an entirely different type of bread.

Traditional Irish soda bread only contains four ingredients: flour, baking soda, salt, and buttermilk. Other versions include eggs, butter or oil, and sugar for flavor, as well as other mix-ins like currents, raisins, or caraway seeds. But because I wanted the most authentic flavors possible, I skipped all those other ingredients! 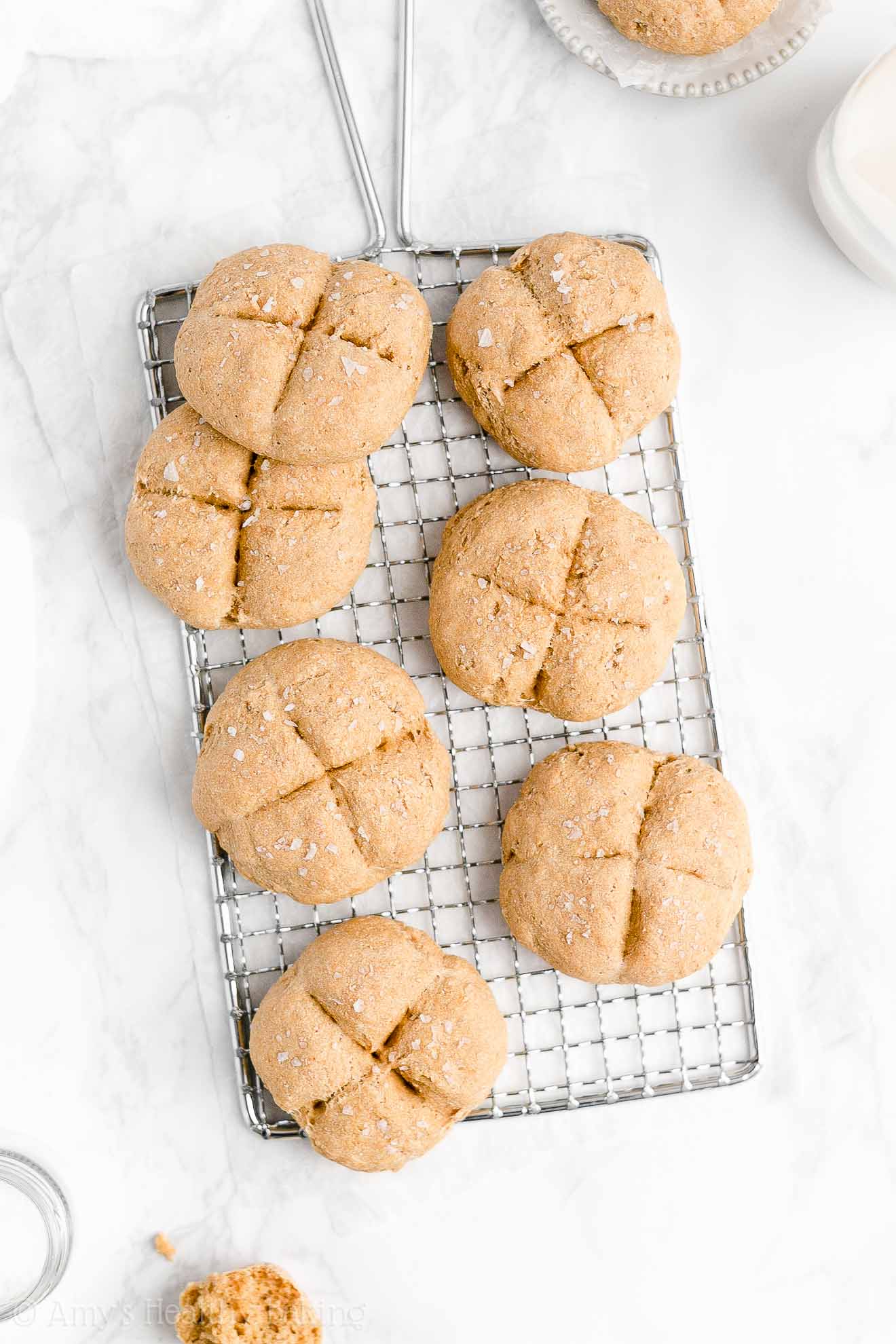 You’ll start with just one bowl, and into it, you’ll add white whole wheat flour, baking soda, and salt. The “soda” part of Irish soda bread refers to baking soda—not the sweet carbonated drink that people call “soda” or “pop!” Baking soda is a base that makes baked goods rise when mixed with an acid, but more on that in a minute! 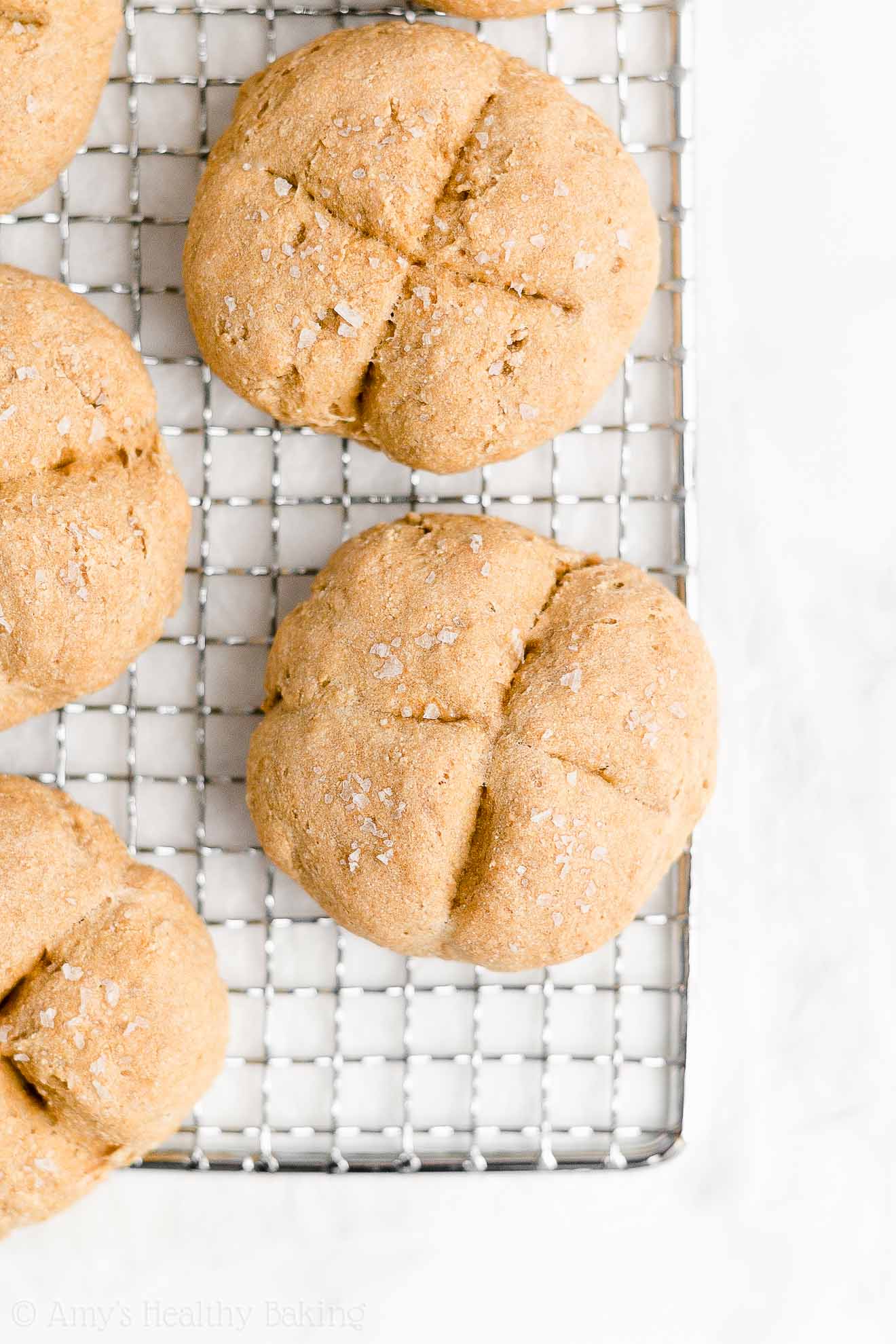 Once you’ve whisked those together, you’ll make a well in the center and pour in milk and vinegar. Yes, traditional Irish soda bread calls for buttermilk… But that’s something I rarely keep in my fridge (unless I’m making multiple batches of these!), and something tells me you might be the same way.

So instead, I opted to make “homemade” buttermilk by mixing together milk and vinegar! To me, that’s one of the best parts of this recipe. Any milk will work! Cow’s milk, almond milk, cashew milk, soy milk, oat milk, rice milk… You name it!

And because any milk will work, it’s so easy to make these healthy Irish soda bread scones vegan! (Which is perfect for our family because so many people are lactose intolerant!) 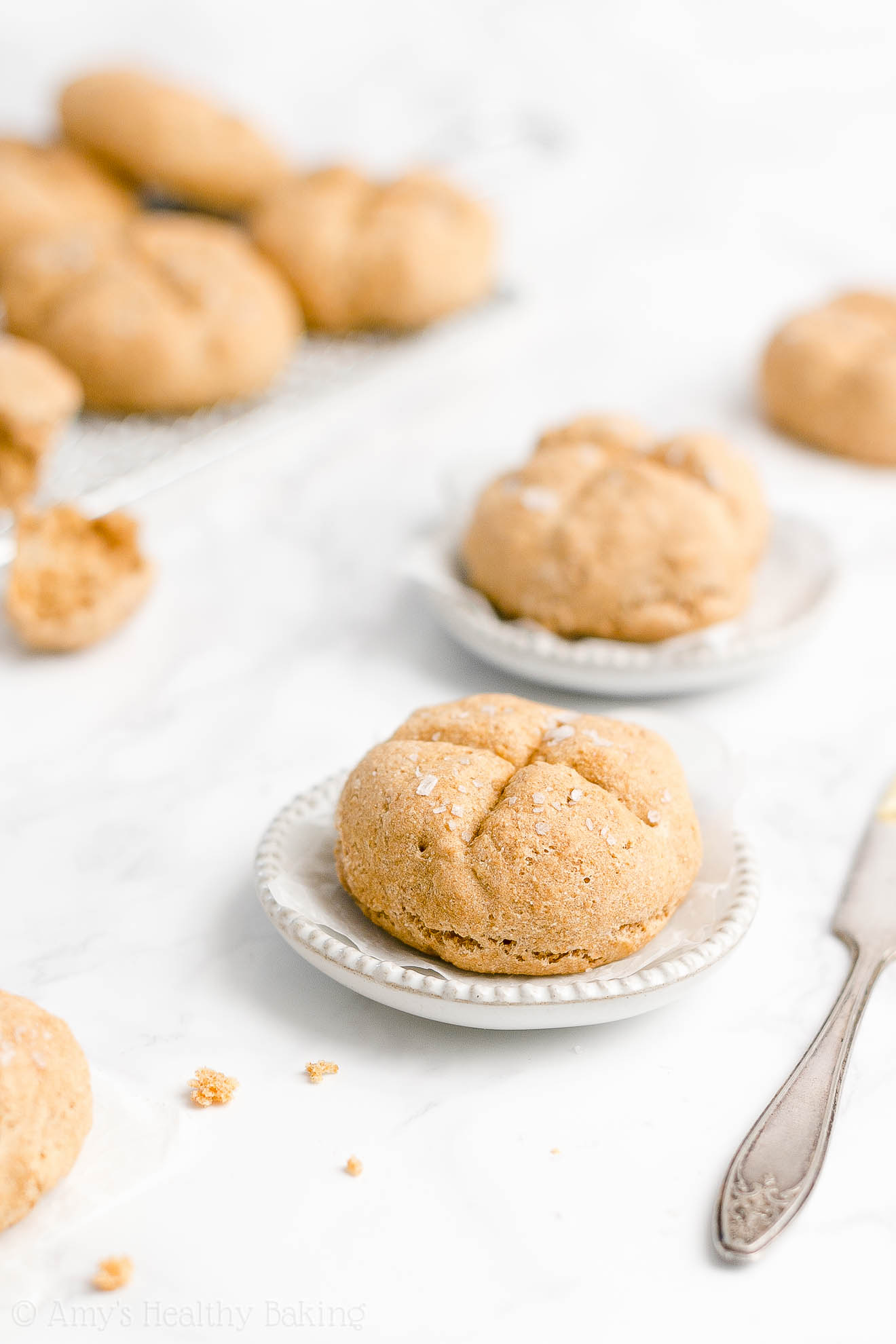 Nerd Alert!
It’s time to revisit the baking soda! Like I mentioned, the baking soda (a base) reacts with acids (in this case, vinegar!). That reacts creates air bubbles, which makes your healthy Irish soda bread scones rise, and it also gives them a more moist and tender texture. Pretty cool, right??

And I promise you can’t taste the vinegar in the finished scones! 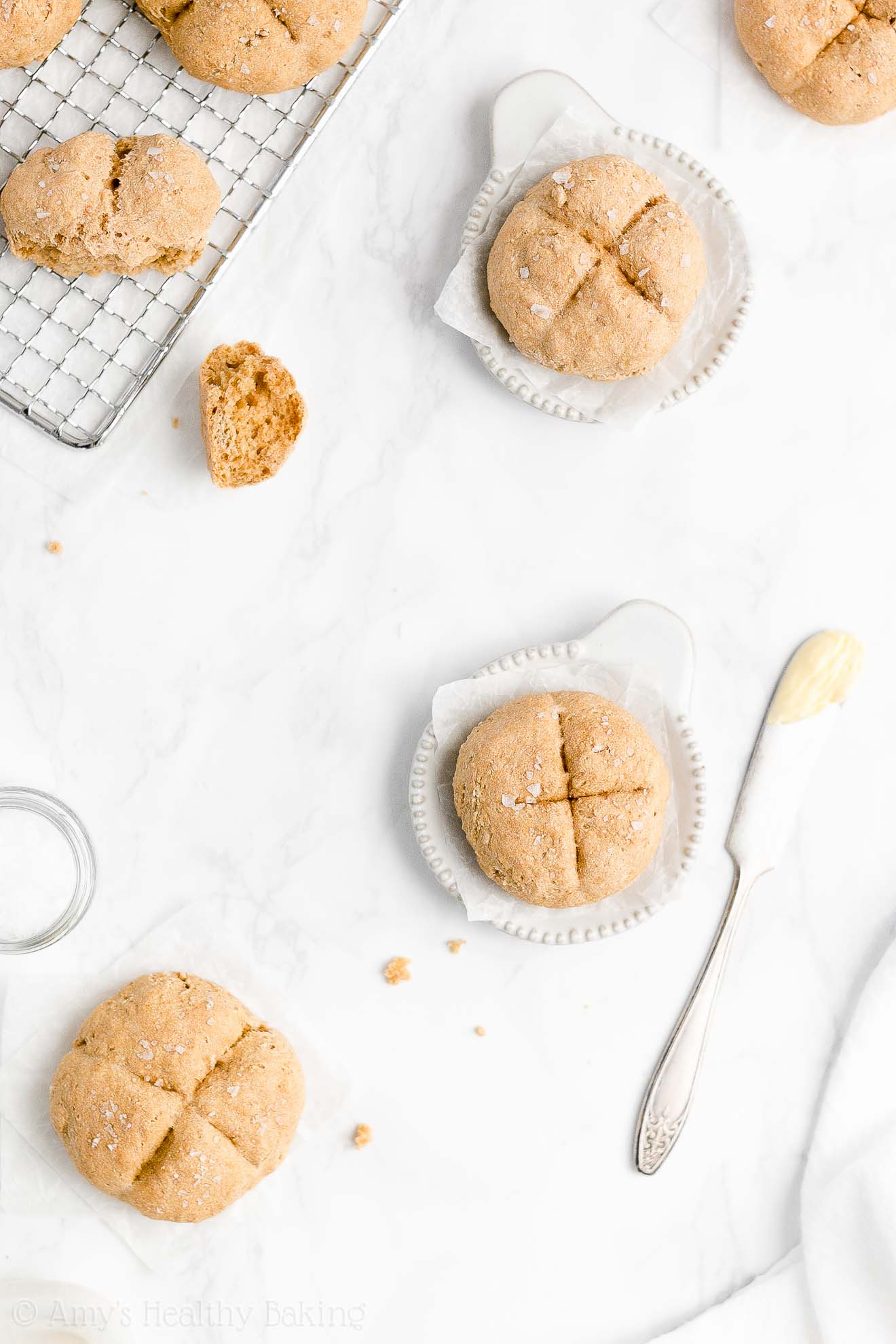 Now that you have your dough, it’s time to shape it into scones! The dough is just a tad bit sticky, which is actually a good thing. If it was really dry, then your scones would be dry too… But moist dough leads to moist scones!

To prevent the dough from sticking to your hands as you shape it into balls and flatten them, just dampen your fingers and palms with a bit of water in between shaping each healthy Irish soda bread scone. Super easy! 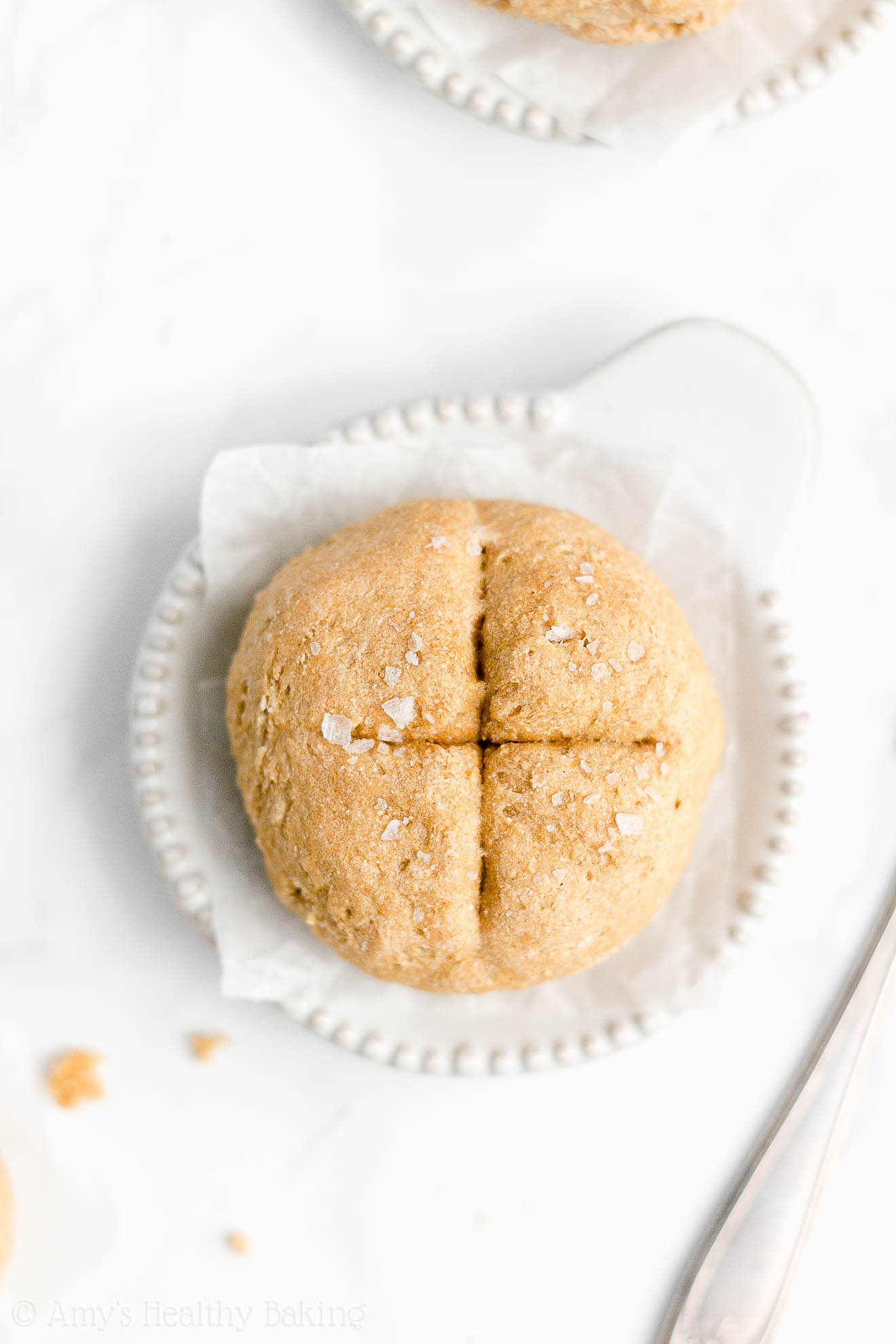 Just before baking, you’ll use a sharp knife to cut a + into the top of each scone. Don’t slice all the way through the dough, from the top all the way to the bottom! Just about halfway through is best.

For a finishing touch, I sprinkled a little flaky sea salt onto the tops of my healthy Irish soda bread scones just before I slid them into the oven. This is the kind I used, and it added such a bright pop of flavor. Although not entirely traditional, I still highly recommend it!

Then just a few minutes later… 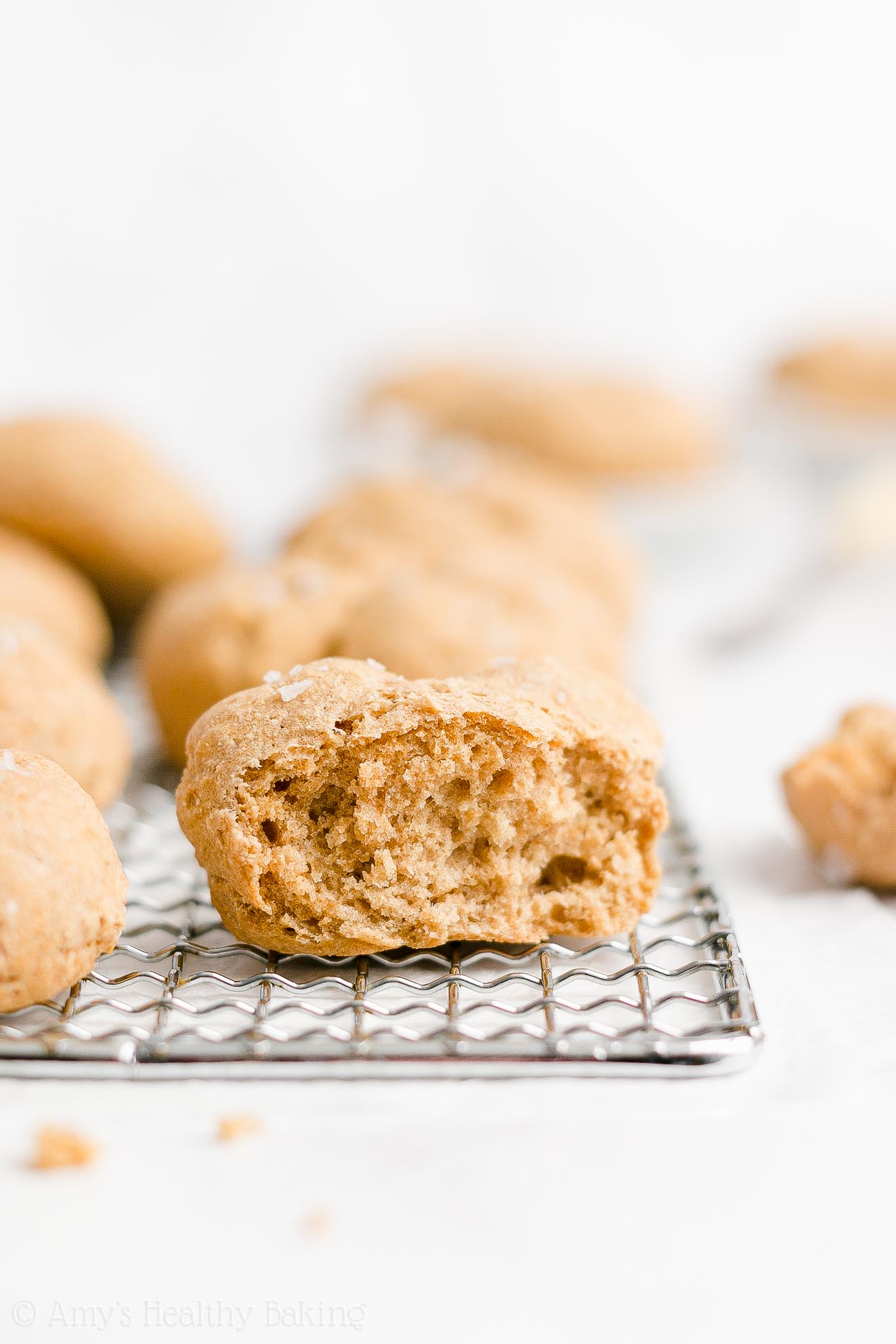 You’ll have a pan of moist, warm, oh-so-irresistible healthy Irish soda bread waiting for you! And really, how easy was that?? I feel like I could easily bake this bread every single day! And when you make your own, remember to snap a picture and share it on Instagram using #amyshealthybaking and tagging @amyshealthybaking IN the photo itself! (That guarantees I’ll see your picture! ????) I’d love to see your healthy Irish soda bread scones!

Click here to PIN the recipe and save it for later!
Yields: 12 scones
This is the easiest bread recipe you’ll ever make! These (mostly) traditional Irish soda bread scones are really moist with a lovely hint of soda flavor, and although not exactly traditional, that optional sprinkling of sea salt adds such a bright and delicious pop of flavor, too. These scones are best if served warm the same day they’re made, but they’ll keep for at least 3 days if stored in an airtight container at room temperature or at least 5 days if stored in an airtight container in the refrigerator (if not longer!).
Notes: For the gluten-free flour, I recommend the following blend: 1 cup (120g) millet flour, ¾ cup (90g) tapioca flour, ½ cup (60g) brown rice flour, and 1 teaspoon xanthan gum. Most store-bought gluten-free flour blends (like this one!) will work, if measured like this.

Remember to measure the flour correctly, using this method or a kitchen scale. (← That’s the one I own and love!) Too much flour will cause the dough to be dry, and it may not fully incorporated. If that happens to you, add a little extra milk (1 teaspoon at a time) until you can incorporate all of the flour.

Any milk will work in place of the unsweetened almond milk.

I haven’t tried any other vinegar (apple cider vinegar, rice vinegar, etc) and don’t know how they’ll turn out.

Traditional Irish soda bread calls for buttermilk, but since I rarely keep that in my refrigerator, I opted to make “homemade buttermilk” out of milk and vinegar! If you prefer, you can substitute ¾ cup + 2 tablespoons of buttermilk for the milk AND vinegar. Because buttermilk is thicker than the other two, you may need to add slightly more if you can’t incorporate all of the flour. (Also, see my blog post above for more details on traditional Irish soda bread!)

I absolutely love the bright pop of flavor from the flaky sea salt! This is the kind I use. I crumble it a bit in between my fingers so the flakes aren't quite as large before I sprinkle it on top of the scones.

To Make One Loaf of Bread: Using a spatula, shape the dough into a 1 ½” tall circle (about 5 ½” in diameter) on your prepared baking sheet. Score a + sign into the top, slicing about halfway through. If using the flaky sea salt, sprinkle a generous amount on top. Bake at 425°F for 27-30 minutes or until the outside is crusty and slightly golden. Cool on the baking sheet for 5 minutes before transferring to a wire rack.

The Healthier Chocolate Treats cookbook is perfect for any and all chocolate lovers. Whether you enjoy chocolate occasionally or every single day (that’d be me!), there are plenty of goodies inside for you! Healthier Chocolate Treats contains 50+ brand new healthier recipes. These recipes have never been seen before or appeared on my blog. You won’t find them anywhere else! And yes—every single one contains some form of chocolate. Whether you prefer milk, dark or white, there are lots of treats inside for you!     What Inspired You to Write Healthier Chocolate Treats? I have always loved chocolate. Every Halloween throughout my childhood, I inverted the entire contents of my bright orange jack-o-lantern bucket … END_OF_DOCUMENT_TOKEN_TO_BE_REPLACED