Learn how to make the best ever healthy buttermilk waffles! Crispy on the outside, fluffy on the inside & just 102 calories!
Click here to PIN the recipe and save it for later! 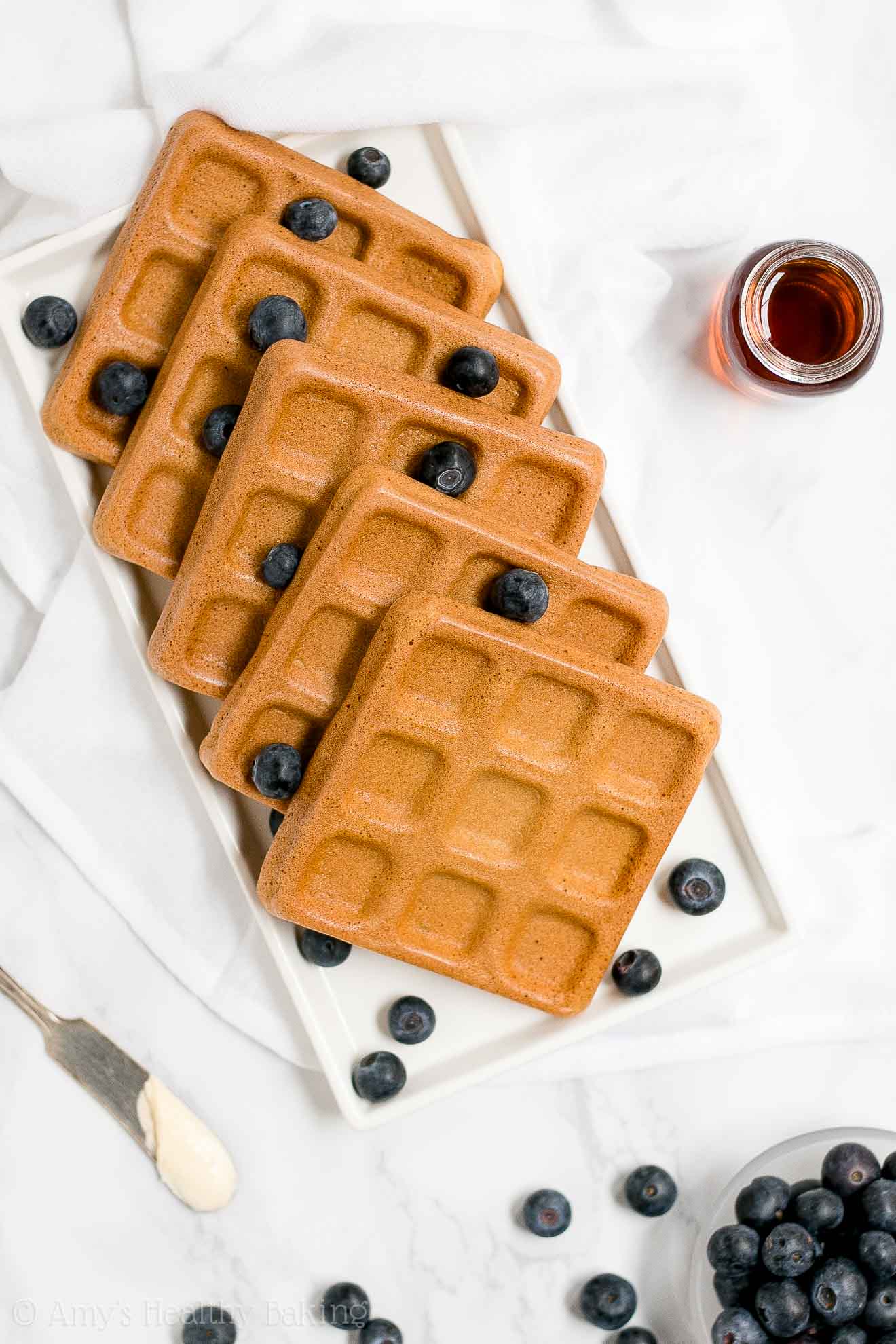 Throughout my childhood, our school district implemented a “Late Wednesday” policy, which meant classes started an hour later than usual. Since my brother and I always took “A Period” to fit in an extra band class during the day, we especially loved those Wednesdays… The school board mandated that schools skipped “A Period” to give teachers time for meetings, so we got two extra hours of sleep instead!

As a treat, Mom often prepared a hot breakfast for us on those days, rather than pouring us bowls of cold cereal. Although she often turned to scrambled eggs, pancakes, or French toast, we always looked forward to Waffle Wednesdays the most. 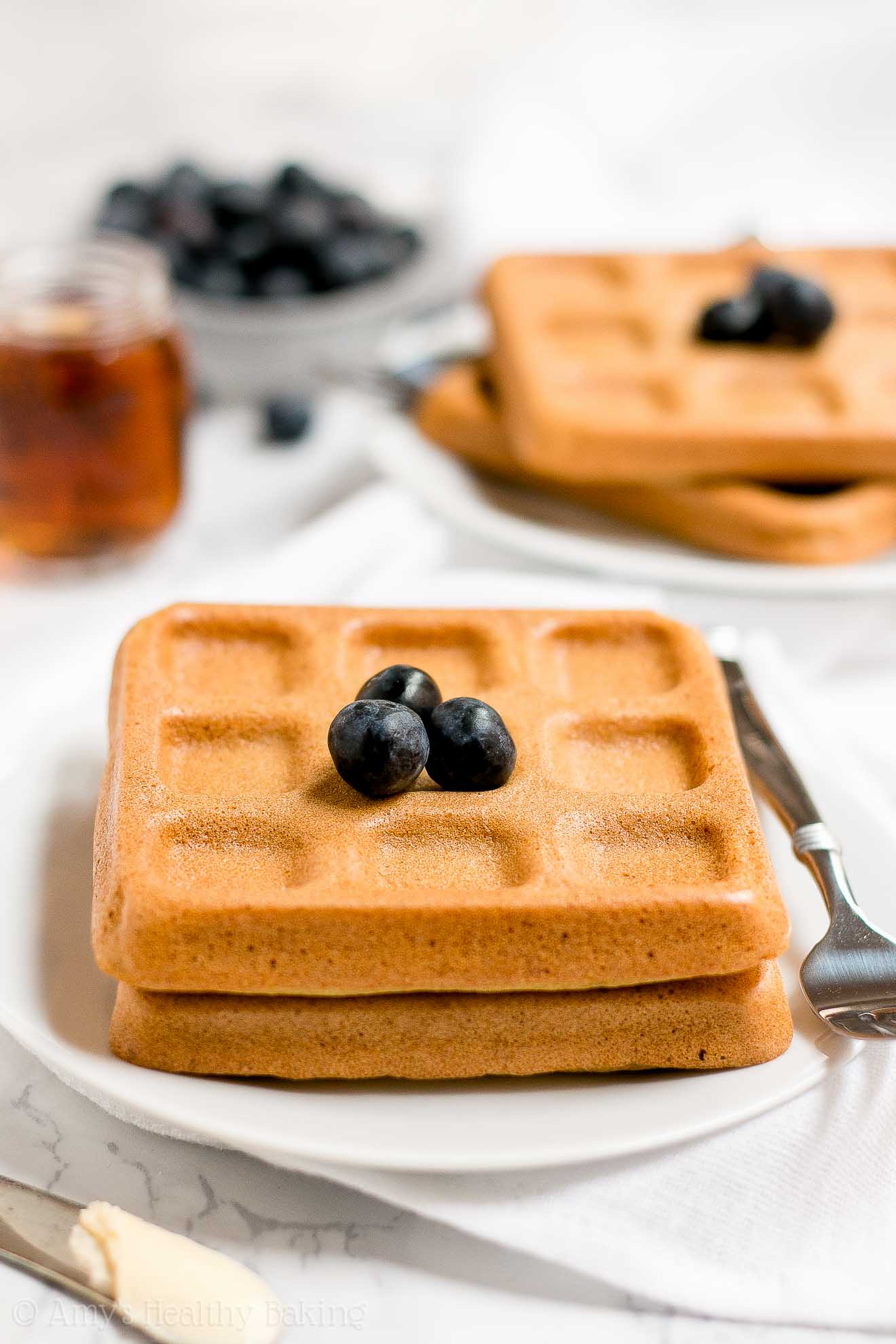 On those mornings, Mom pulled out her really old rectangular waffle iron, a completely metal design from the 1980s. Because it took so long to preheat, she turned it on before jumping in the shower, and she still had time to whip up the batter after. A little while later, she handed each of us a piping hot waffle square on a plate, along with a bottle of maple syrup.

One particular Wednesday, just a few moments after we heard the shower water shut off, a piercing sound rang out throughout the house… The waffle iron had started smoking like crazy, which set off the smoke detector! 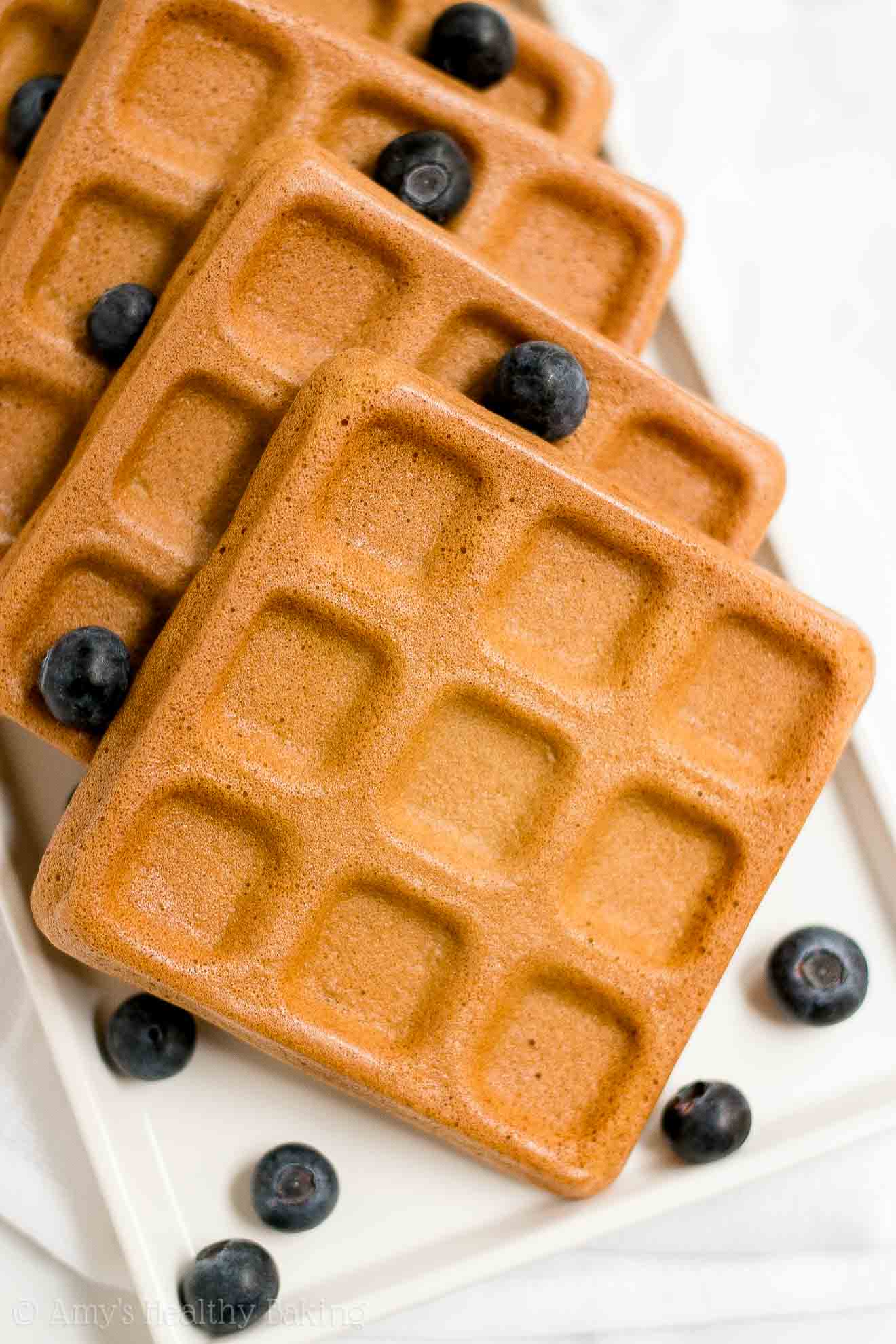 We immediately unplugged the waffle iron, then started opening windows and waving a towel in front of the smoke detector, desperately trying to make it stop blaring. Our neighbor even called to check on us… She had smelled the smoke and heard the alarm!

Although we never used that vintage waffle iron again, we bought Mom a new one for Mother’s Day later that year!

While I still love to order waffles when we go out for brunch, I rarely make them at home… That nearly-on-fire waffle iron experience was slightly scarring, and I always felt bad that Mom waited until my brother and I were completely full to sit down with a plate of her own. 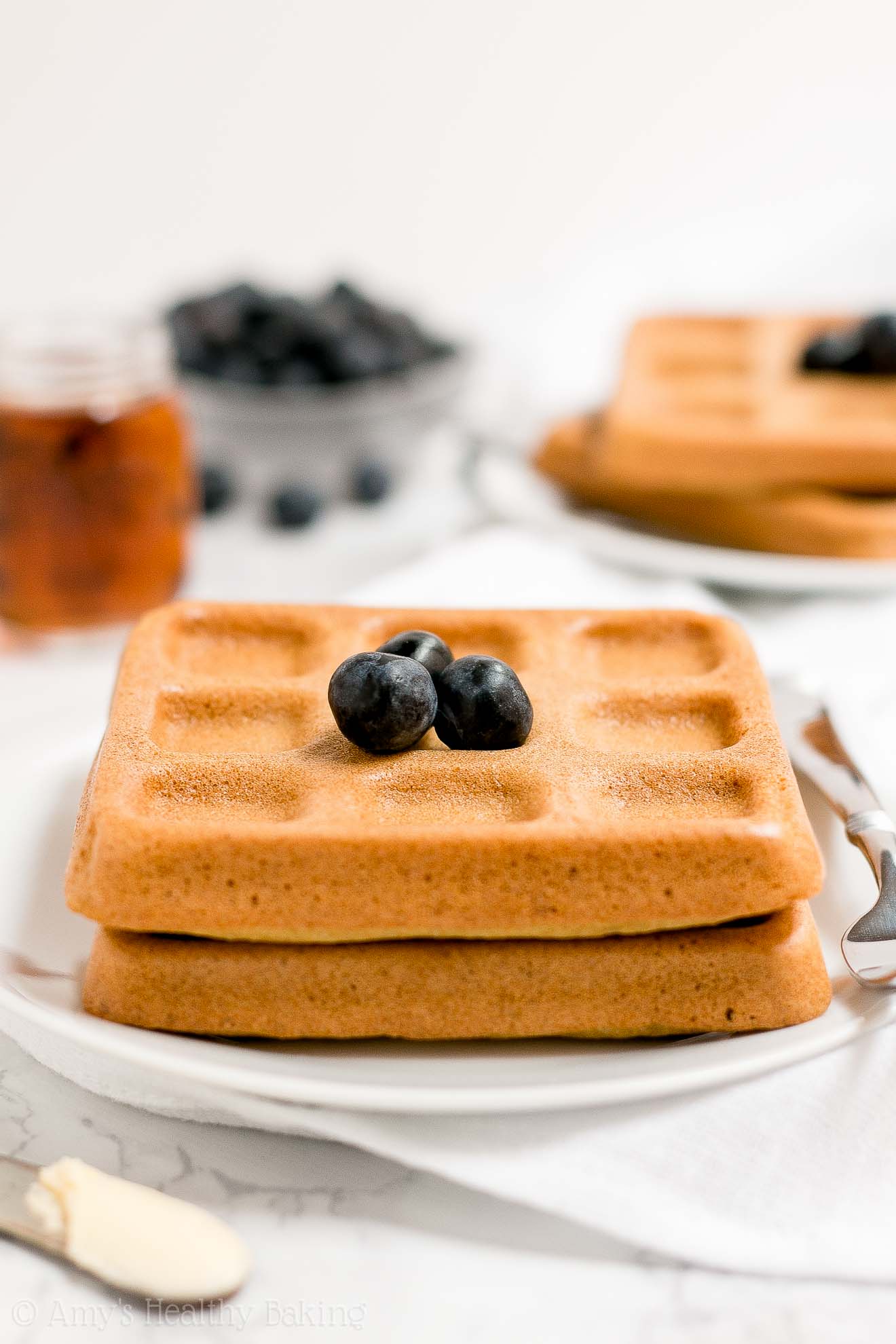 So I finally created this Ultimate Healthy Baked Buttermilk Waffles recipe to solve both of those! These waffles are just as rich and fluffy as the ones from my childhood, and we all get to sit down for breakfast at the same time. I’m also sharing my secret trick to making healthy waffles turn out crispy, even without lots of butter or oil like in traditional recipes!

I’ve baked these buttermilk waffles at least once a week for two months straight… They truly are the best healthy waffles! 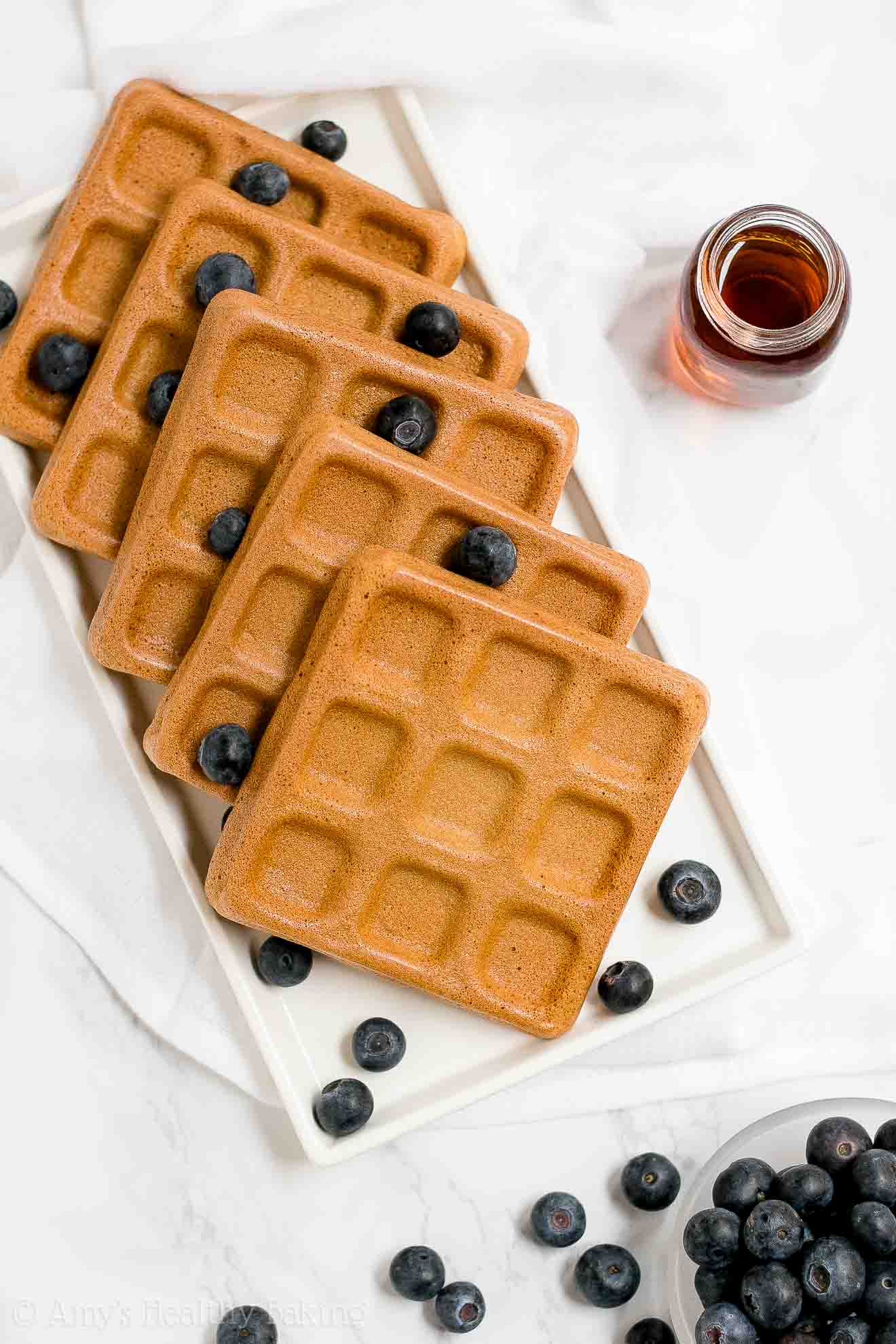 So let’s go over how to make these healthy buttermilk waffles! I learned a lot about the science of waffles while testing this recipe, so I’m sharing that information with you so your waffles turn out perfectly, too! 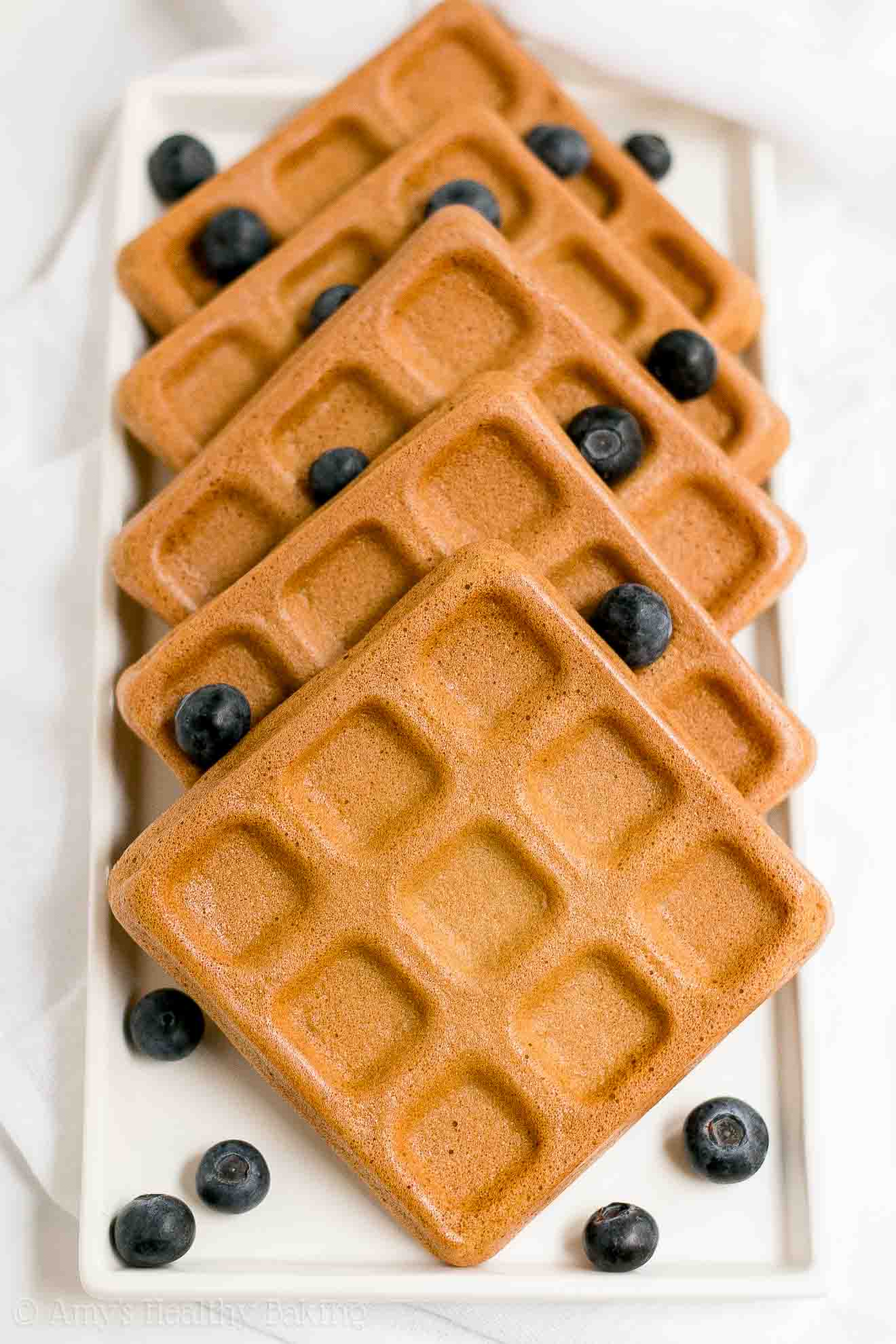 Nerd Alert #2: Leaveners
You’ll use both baking soda and baking powder in these healthy buttermilk waffles! The former is actually more important in making your waffles rise. Baking soda is a strong base, and it reacts with the acidic buttermilk (more on that ingredient in a moment!). When they react, they create air bubbles, and those air bubbles make your waffles rise and also help with their texture.

Nerd Alert #3: Butter or Oil
We do need a little bit of butter or oil in these healthy buttermilk waffles! Without it, they have a slightly tough and gummy texture. Melted butter, melted coconut oil, or any other oil all work equally well. You just need 2 teaspoons! And that’s because…

Nerd Alert #4: Greek Yogurt
You’re mixing Greek yogurt into the batter, which add the same moisture as extra butter or oil for a fraction of the calories! It’s a key ingredient to keeping these healthy waffles fluffy and tender. 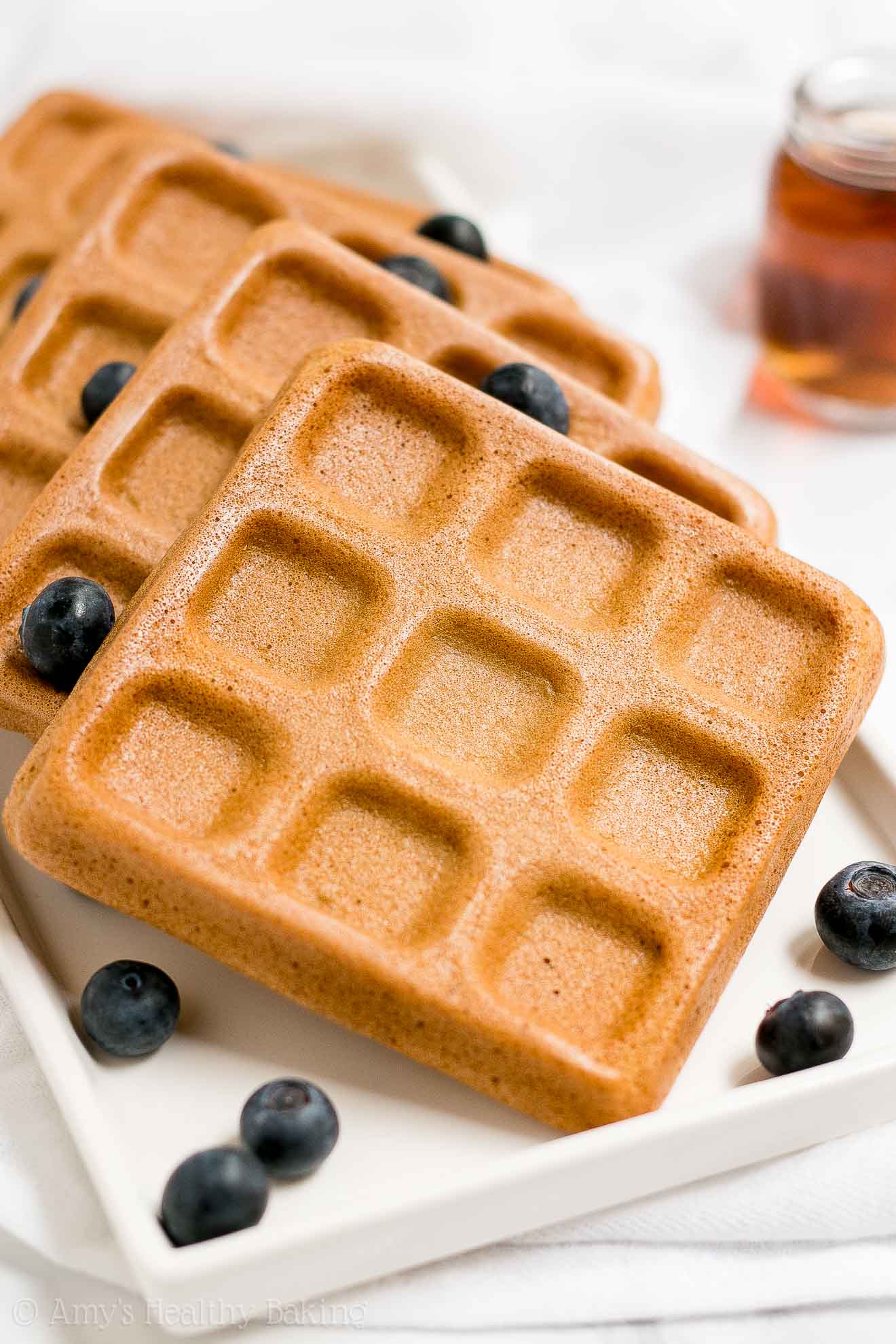 Nerd Alert #5: Buttermilk
The low-fat buttermilk truly is the most important ingredient in this entire recipe! And not just for its iconic flavor… It makes the best waffles from a texture standpoint, too!

We already covered that buttermilk is acidic, which reacts with the baking soda (a base) to improve the texture and also help the waffles rise. However, it’s also really thick and has a bit more fat than nonfat milk (pretty obvious, I’m sure!), almond milk, soy milk, and cashew milk. Both of those, the thickness and little extra fat, make a huge difference in your healthy waffles!

I tried testing this recipe with different homemade buttermilk substitutes made from other milks and vinegar. Even when I tweaked the other ingredients, those faux-buttermilk waffles never turned out as fluffy (although they still tasted yummy!).

So… The moral of this buttermilk story? It’s totally worth buying regular low-fat buttermilk to make these waffles—I promise!! 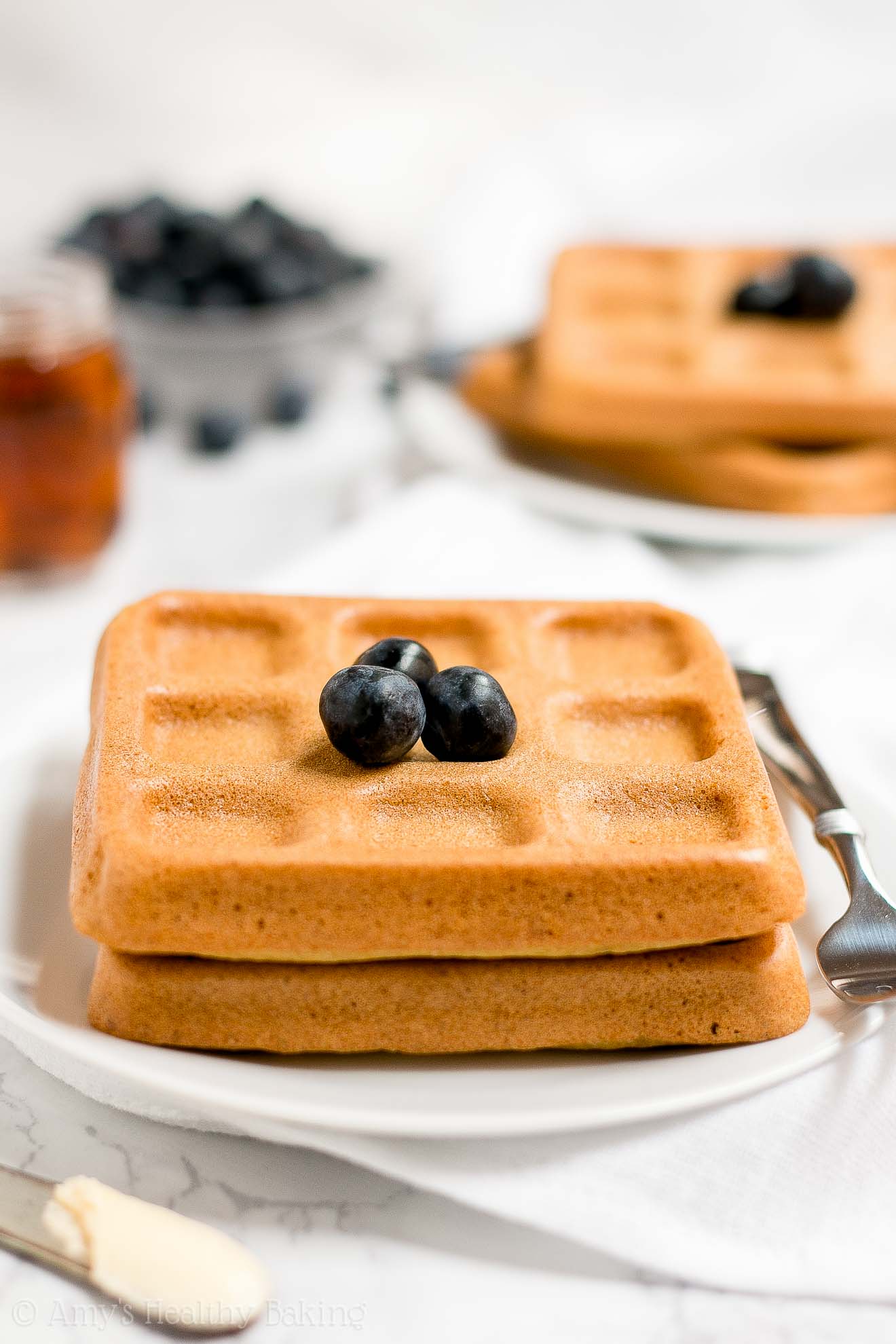 Nerd Alert #6: Water
This is going to sound a little strange, so hang with me for a minute! The batter is really thick when you first mix it up, so you’ll add water to make it a bit thinner and easier to spread into your waffle pans.

And yes, I tried reducing the amount of water with my homemade buttermilk substitutes because those homemade substitutes weren’t as thick as regular buttermilk… But even so, the waffles didn’t rise as well or turn out as fluffy. So stick with the regular low-fat buttermilk + water combination for the best healthy waffles! 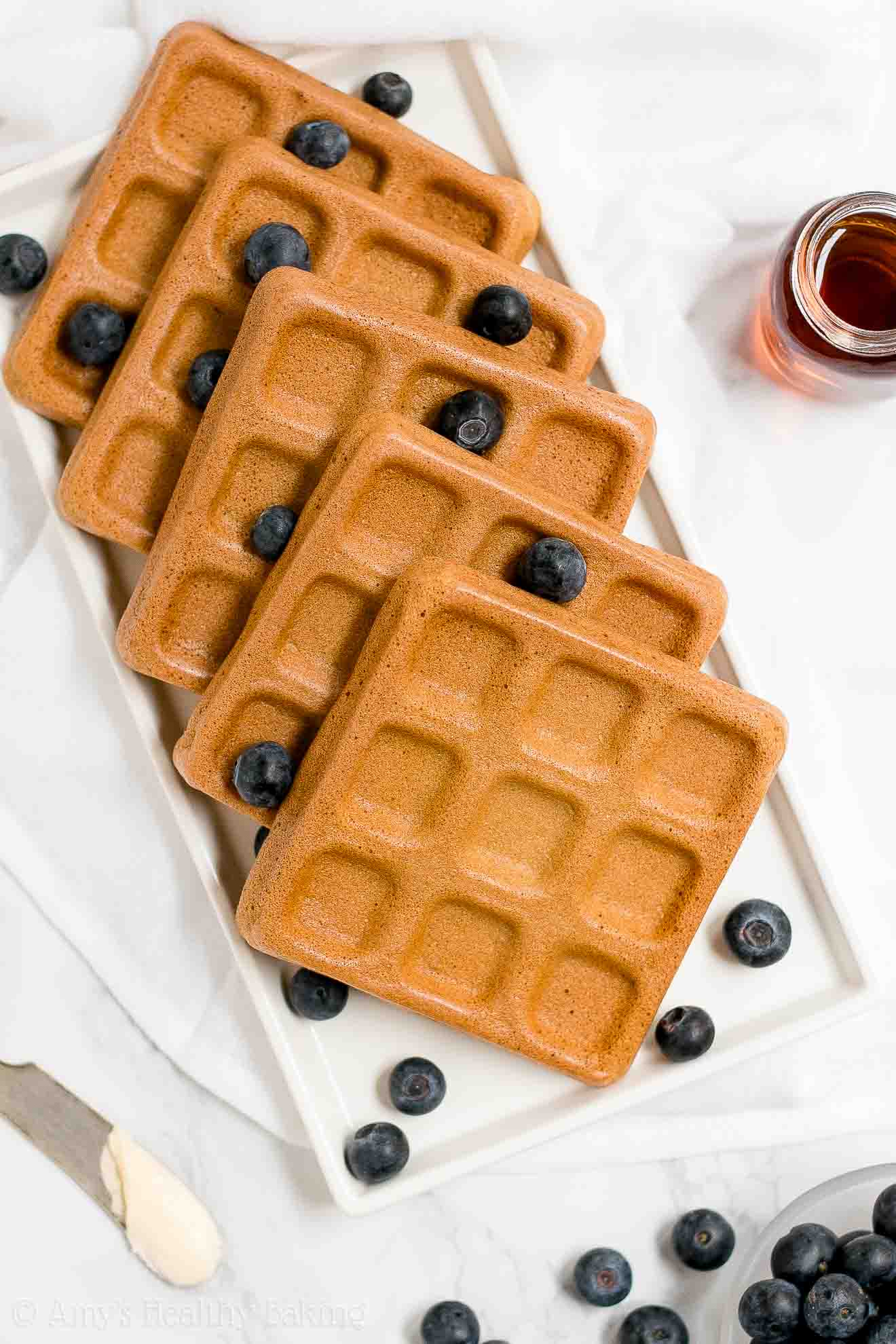 Nerd Alert #7: Waffle Pans
I used these waffle pans to make my baked waffles! I usually hate buying “one use” pans, so I was really hesitant to purchase these… But when I saw the price tag (totally affordable!) and realized just how amazing baked waffles tasted (I made them twice a week for an entire month!), those waffle pans immediately became my favorite kitchen item. I’m totally obsessed!

And because I’m guessing you’ll ask… Yes, I did try using my {modern, non-1980s} waffle iron to make these waffles as well. Unfortunately, they didn’t turn out quite as well as the baked version… While the baked waffles were thick and fluffy and firm, the waffle iron ones turned out limp and soggy. But when I finished both kinds off with my secret trick (see below!), they still turned out incredible! 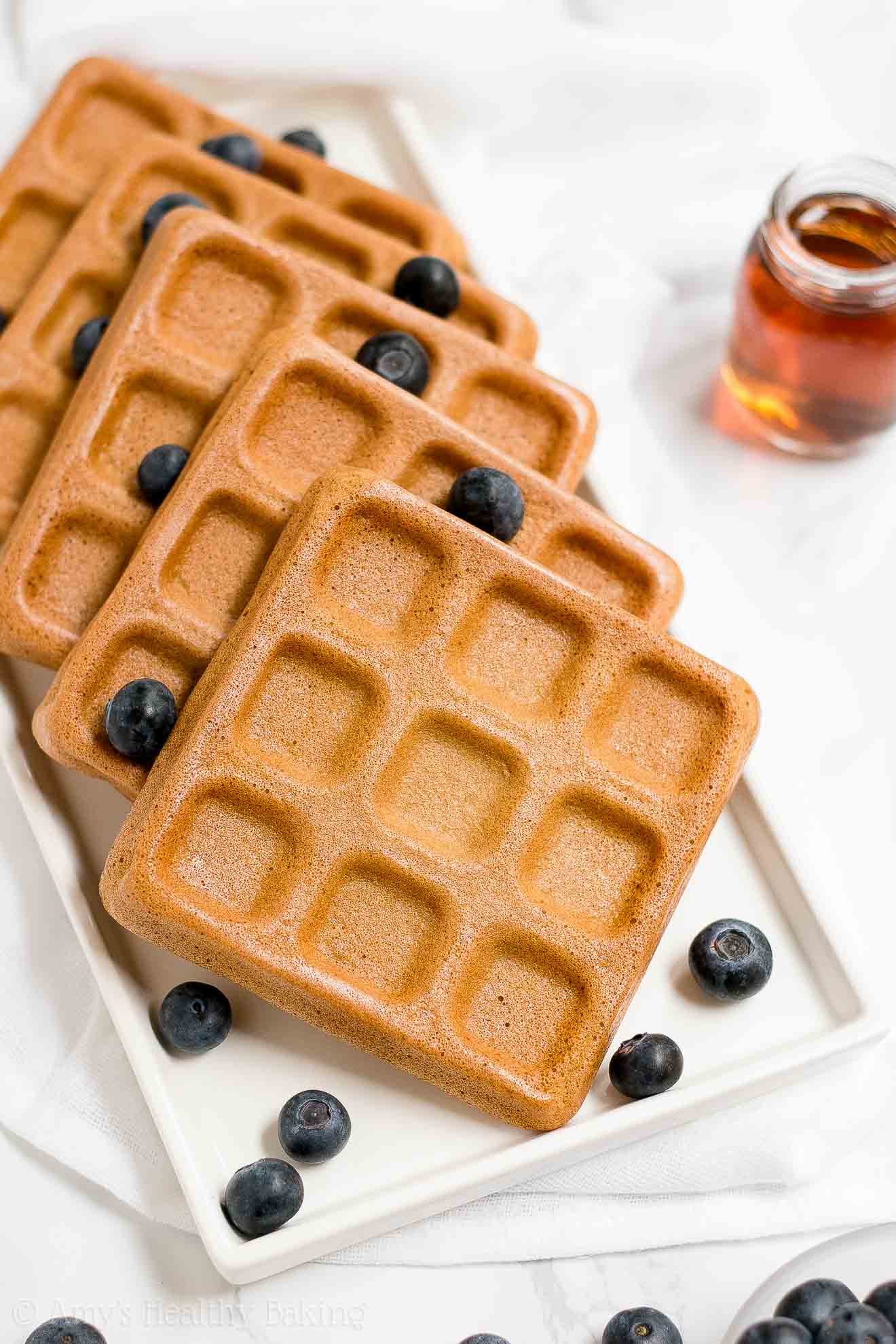 Nerd Alert #8: Secret Trick
My favorite waffles are the kind that are crisp on the outside and fluffy on the inside, but… That normally requires a lot of butter or oil. Since these healthy buttermilk waffles use so little butter or oil, I needed to find a different way to achieve that perfect texture.

So this is probably the most important step in the instructions! I actually recommend that you let your waffles cool all the way to room temperature… And then pop them in the toaster oven until they turn crispy!

That toaster trick is a complete game-changer! Crispy on the outside, soft and tender on the inside, and still piping hot like you just pulled them off of the waffle iron. True waffle perfection! 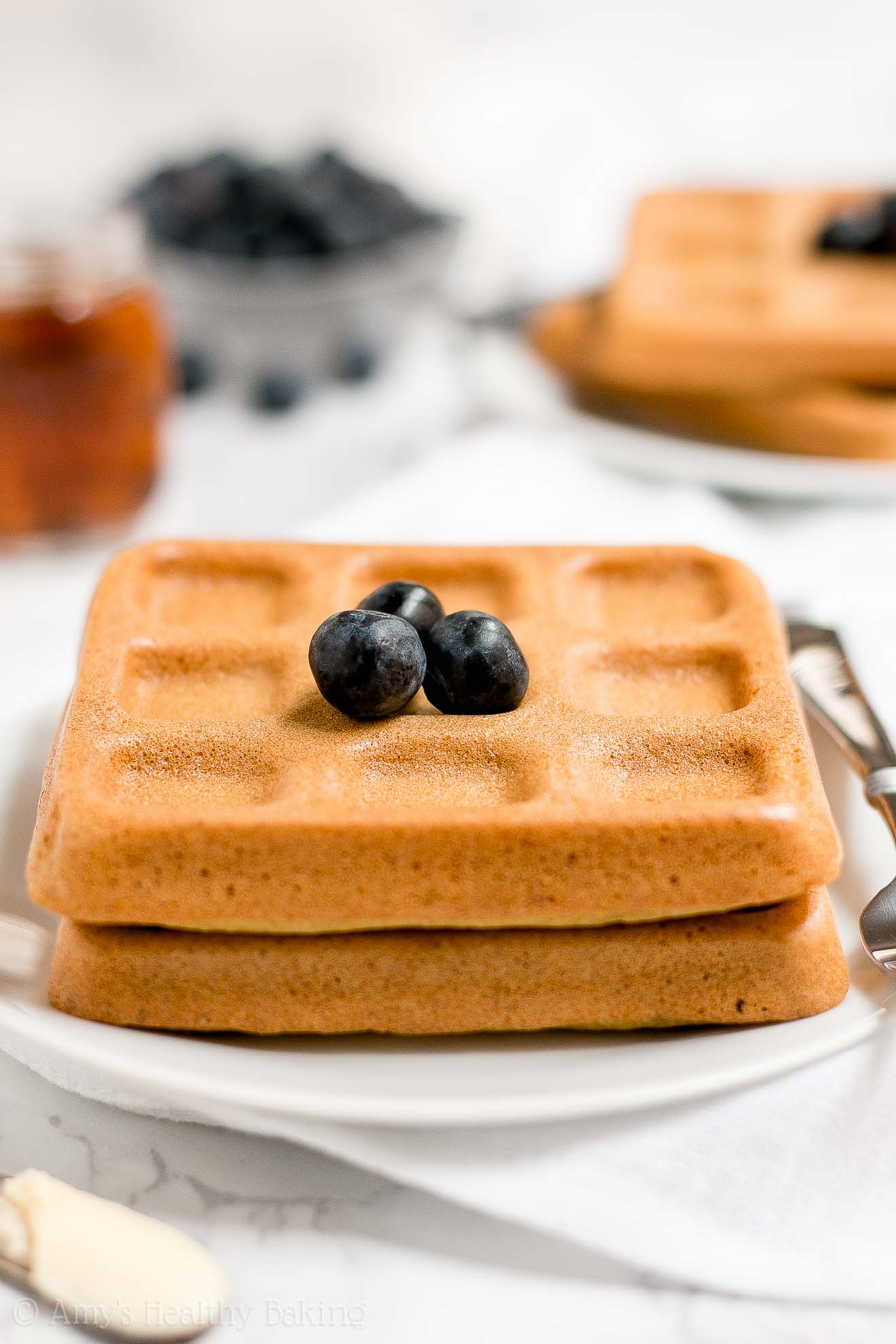 Now armed with of those tips and tricks, are you ready to make your own healthy buttermilk waffles? And when you do, remember to snap a picture and share it on Instagram using #amyshealthybaking and tagging @amyshealthybaking IN the photo itself! (That guarantees I’ll see your picture! ?) I’d love to see your healthy waffles!

Click here to PIN the recipe and save it for later!
Yields: 12 waffles
I may be biased, but these are the best homemade waffles I’ve ever had! They’re crispy on the outside, fluffy on the inside, and full of rich buttermilk flavor. Leftovers will keep for at least one week if stored in an airtight container in the refrigerator.
Notes: For the gluten-free flour, I recommend the following: 1 cup (120g) millet flour, ¾ cup (90g) tapioca flour, ½ cup (60g) brown rice flour, and 1 ½ teaspoons xanthan gum. Most store-bought gluten-free flour blends (like this one!) will also work, if measured like this.

I really, really, REALLY recommend using regular low-fat buttermilk in these waffles! Homemade buttermilk substitutes aren’t nearly as thick, and that negatively impacts the texture. (See “Nerd Alert #5” in my blog post above for more information!) In a pinch, you can mix together ¾ cup + 3 tablespoons (225mL) of any milk + 1 tablespoon (15mL) of vinegar and let that sit for at least 5 minutes before using it in place of the low-fat buttermilk. If using that substitute, reduce the water to ½ cup (60mL) instead. Your waffles won’t turn out quite as tall and fluffy, but they’ll still taste delicious!

These are the waffle pans that I use. They’re totally affordable and worth every penny! I made these waffles at least once a week for two months straight, and the pans still act like they’re as good as new!

This recipe was specifically designed for baking. (See “Nerd Alert #7” in my blog post above for more information!) You can use the batter in a traditional waffle iron, but the waffles will turn out more limp and soggy compared to the thick, firm, and fluffy baked waffles. If making the waffles in a regular waffle iron, do NOT skip Step 4 for crispy waffles—it makes a HUGE difference in the final waffle texture! Toasting your waffle iron waffles will make them much firmer, rather than limp and soggy!

The Healthier Chocolate Treats cookbook is perfect for any and all chocolate lovers. Whether you enjoy chocolate occasionally or every single day (that’d be me!), there are plenty of goodies inside for you! Healthier Chocolate Treats contains 50+ brand new healthier recipes. These recipes have never been seen before or appeared on my blog. You won’t find them anywhere else! And yes—every single one contains some form of chocolate. Whether you prefer milk, dark or white, there are lots of treats inside for you!     What Inspired You to Write Healthier Chocolate Treats? I have always loved chocolate. Every Halloween throughout my childhood, I inverted the entire contents of my bright … END_OF_DOCUMENT_TOKEN_TO_BE_REPLACED