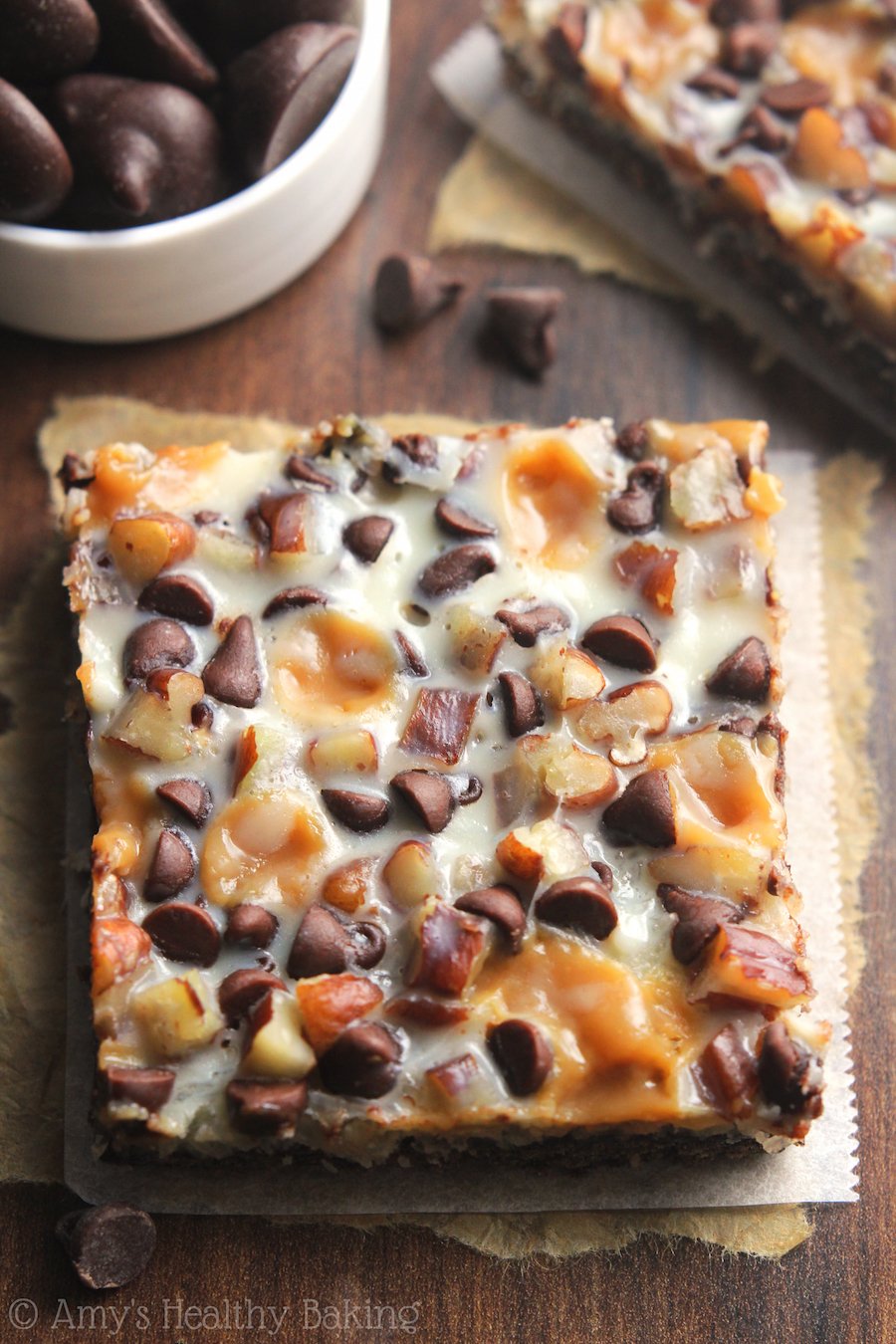 Growing up, the only seven layer food I knew about was bean dip. And that was only because of my last year of Camporee.

Around when I started middle school, my mom began a Girl Scout troop for me and four of my friends. We were tired of the tea parties and overzealous cookie sales of our original troop, and we wanted to focus on adventurous, outdoorsy activities like rock climbing and kayaking instead. 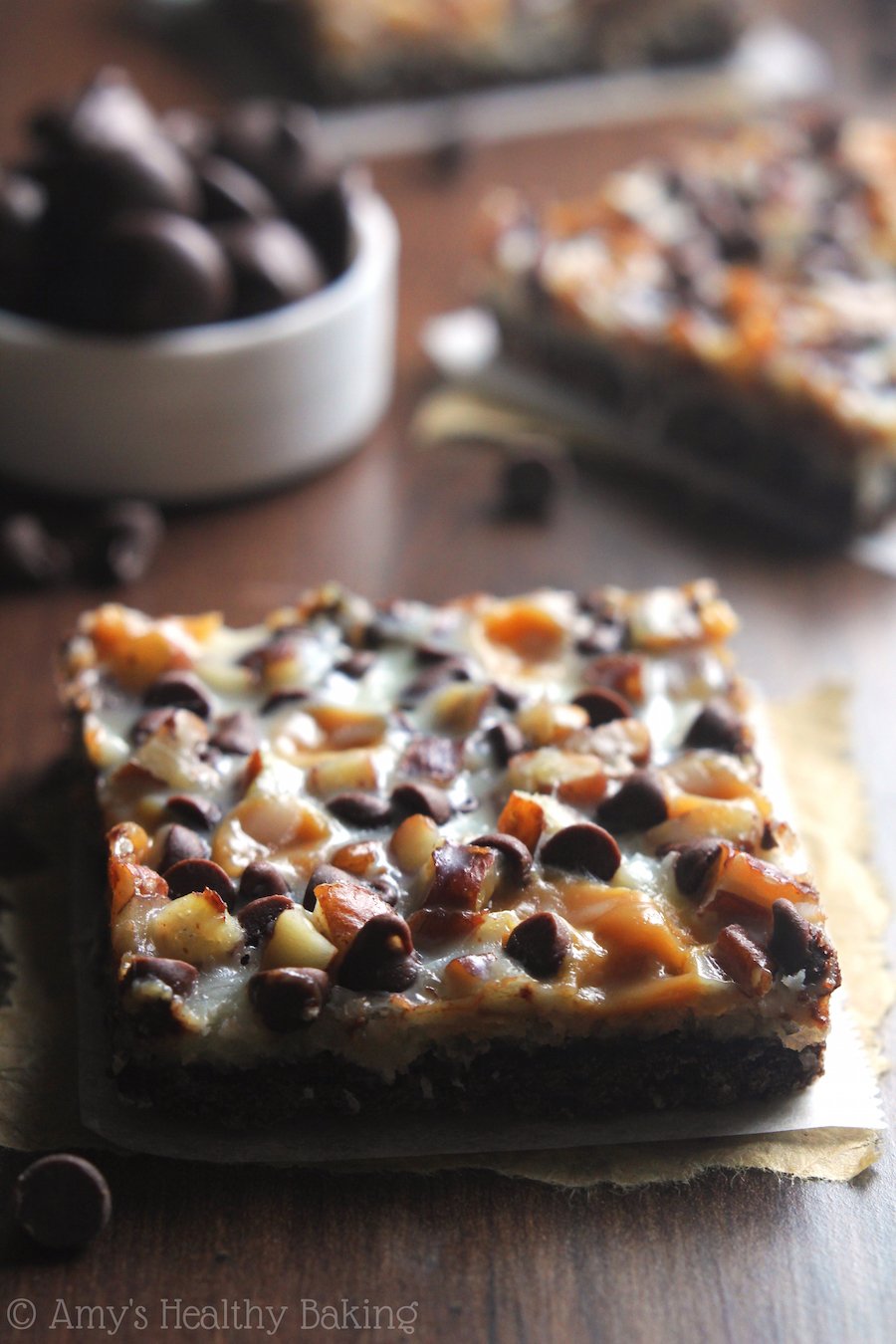 When spring arrived, we excitedly planned out the highlight of our year: Camporee. We outline packing lists, campfire songs, and the minivan seating chart. Growing up in a huge camping family, I figured we’d grill burgers and dogs for dinner that first night, but…

My best friend’s mom didn’t trust the cleanliness of the campground fire pits. (She considered stay at a motel “camping” and actually sent us up with packets of travel-sized toilet seat covers.) To make sure we didn’t starve, she bought oversized bags of tortilla chips and two humongous platters of seven layer bean dip, along with chocolate chip cookies and tootsie rolls for dessert. 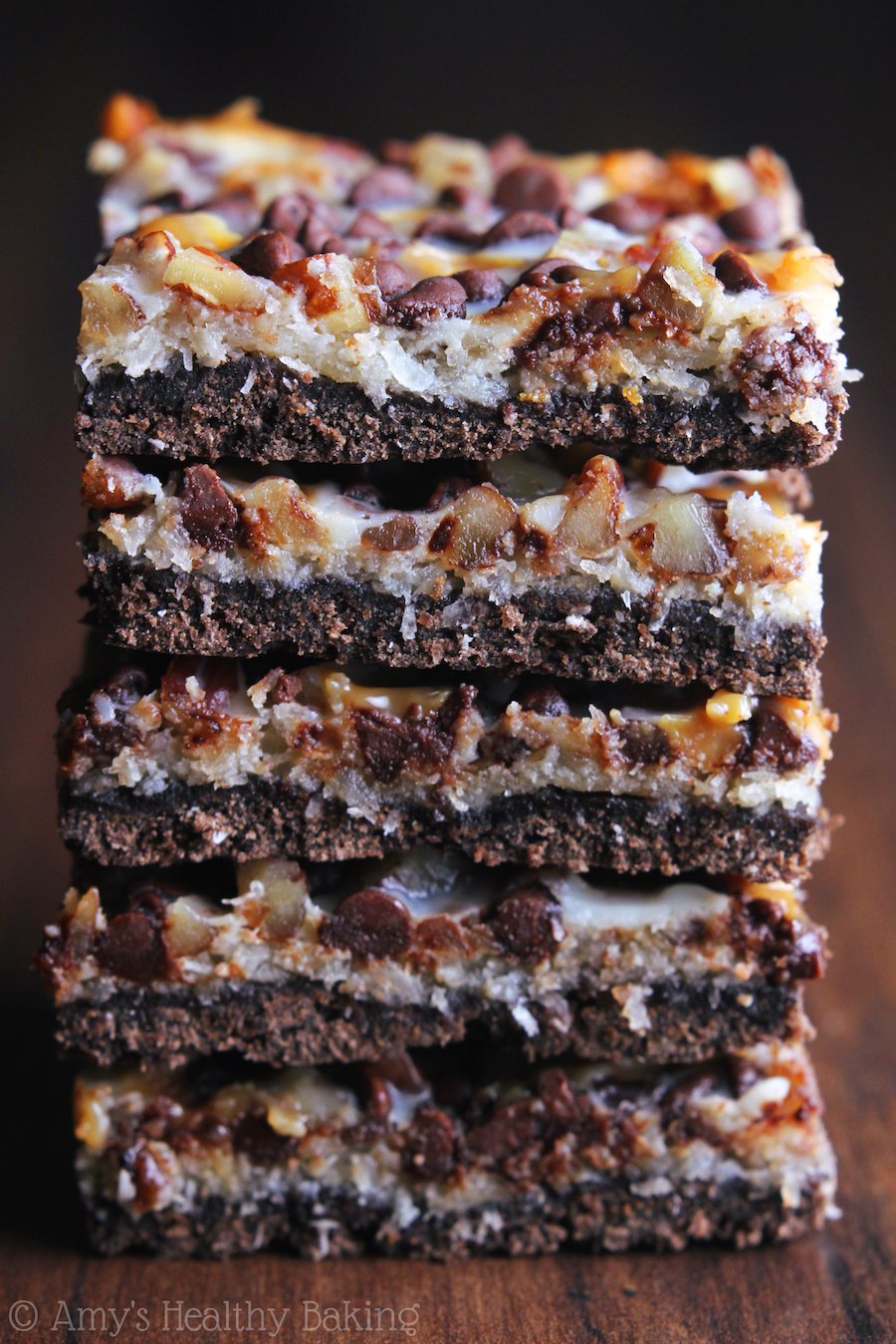 So for most of my life, I thought that bean dip was the only seven layer dish out there… Until I met Trish and Dorothy and sat mesmerized at my computer screen every time they posted a seven layer bar (aka magic bar) recipe. All of those chocolate and coconut treats looked oh so gooey and irresistible, so I finally caved and made my own version: these Skinny Chocolate Caramel Seven Layer Bars! 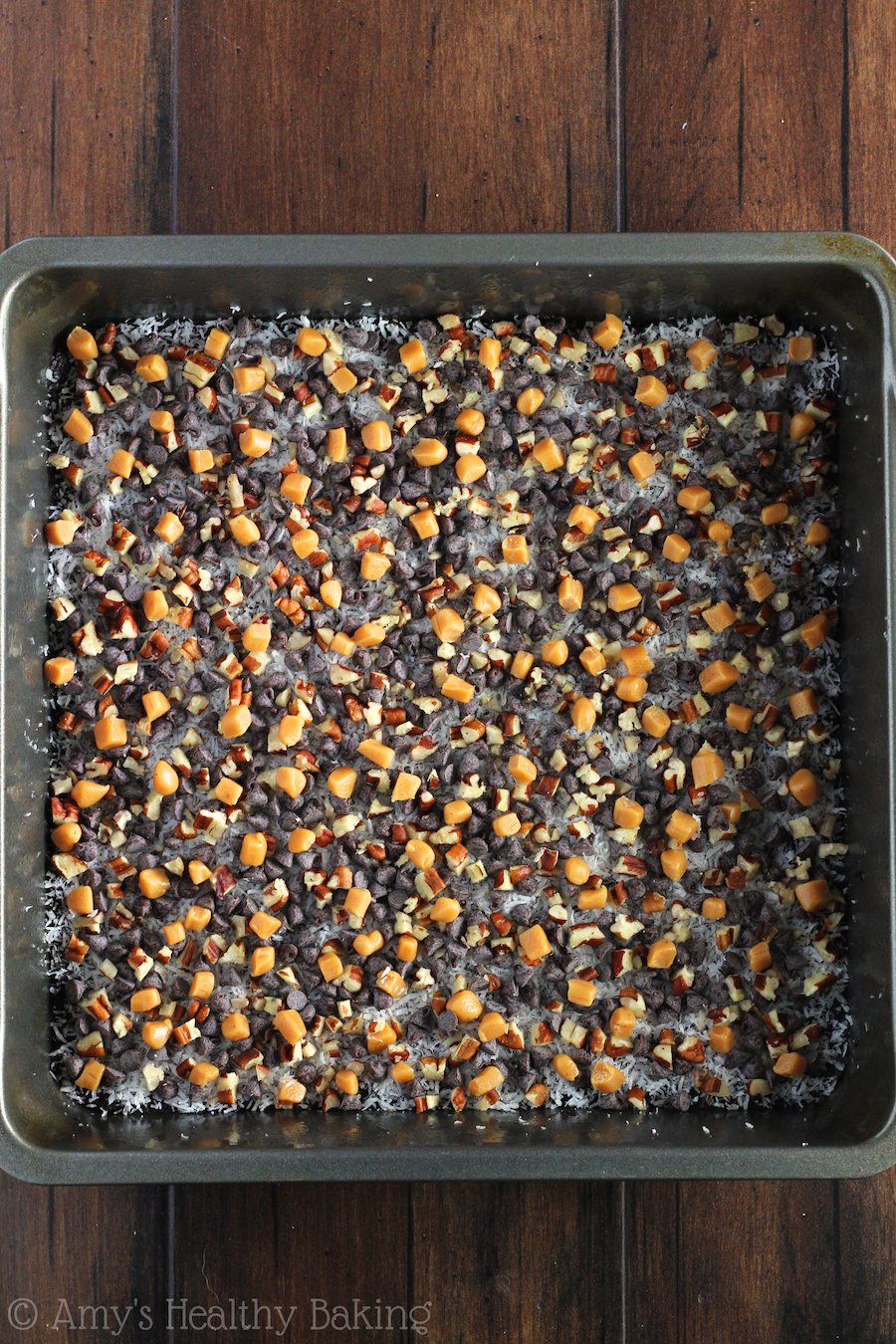 If you’re like I was and am still stuck on layer of refried beans and cheese, let’s go over the anatomy of the dessert. You’ve got…

…all layered in a pan and baked until they reach melty, gooey, finger-licking perfection. And way more calories than I want to think about! 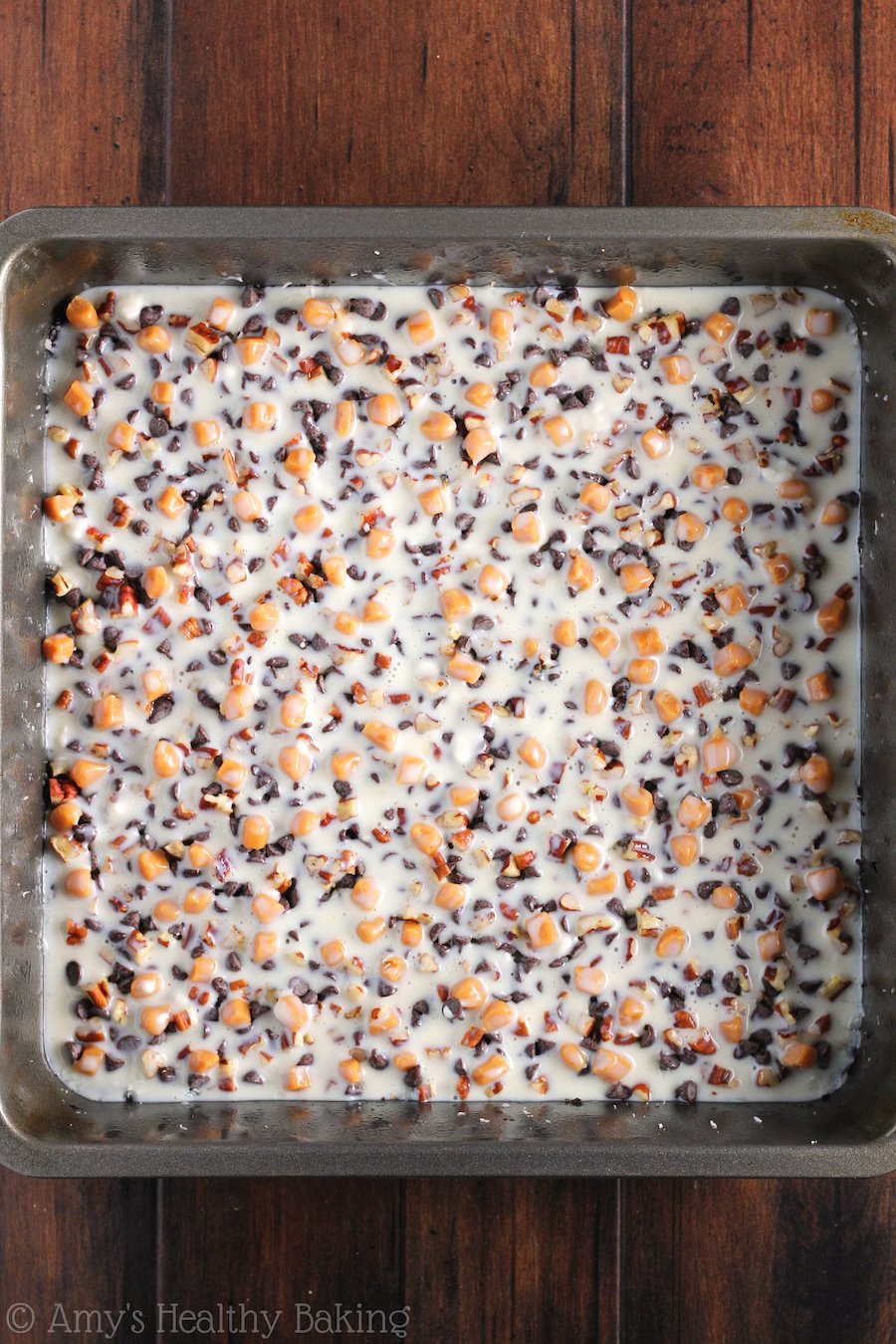 To lighten up the traditional recipe, I made a few simple swaps:

Egg whites for butter. The butter holds together the graham crackers crust, but since I’ve already used egg whites in cheesecake crusts, which are essentially the same thing, I cut out a whole lot of calories and added a little protein too!

Caramel for butterscotch. This was mainly because of my personal flavor preferences. Something about sweet, buttery caramel is so irresistible! But it also shaves off a few calories too while adding that oh so addictive gooeyness. I don’t think I’ll ever go back to butterscotch! 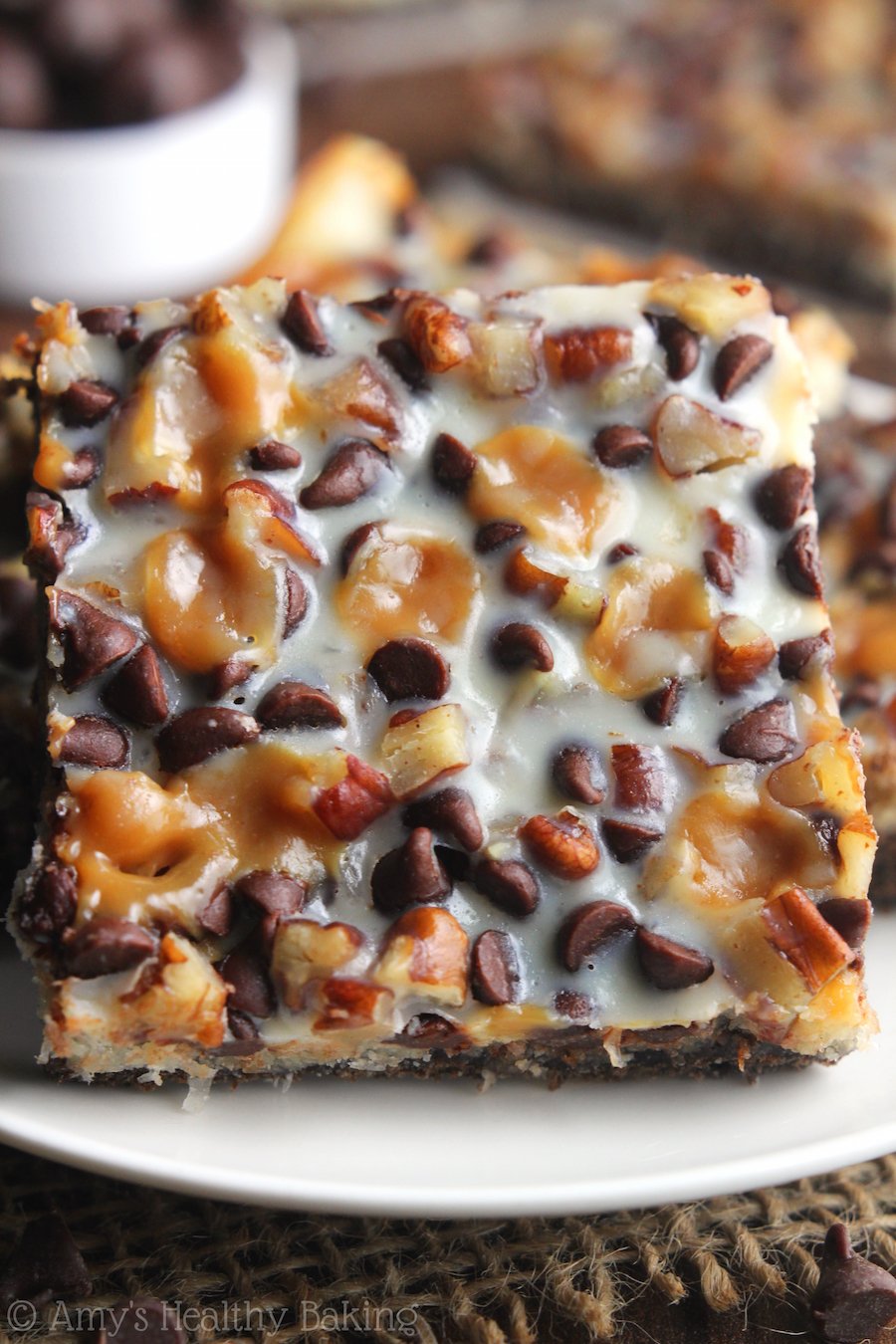 The last benefit of my version? It only makes half a pan! With how dangerously addictive these bars proved to be—one of those “wake up in the middle of the night and sneak into the kitchen when no one is looking” treats—that made it much easier on my lack of willpower! 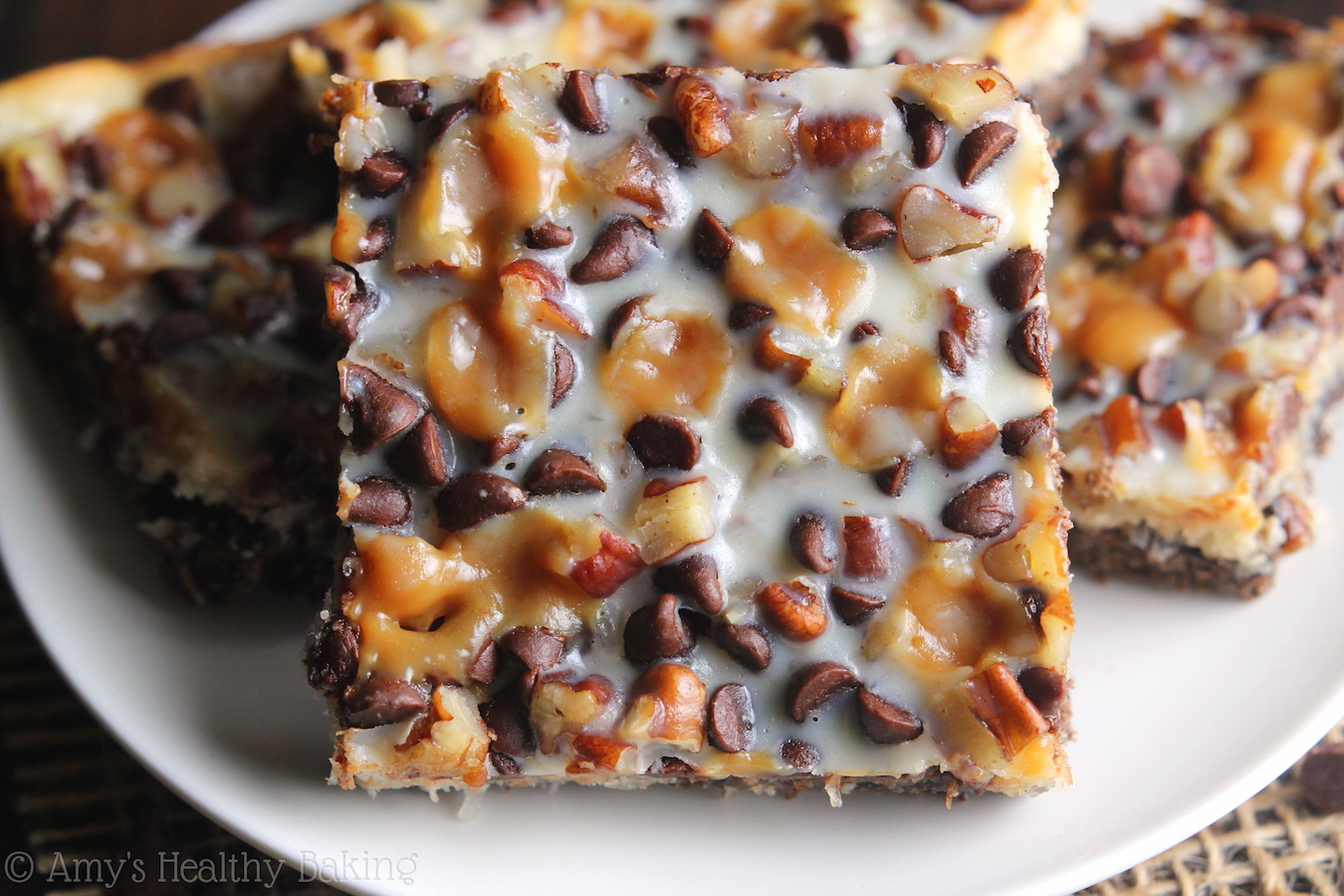 P.S. The best part? Yet another version is going in my cookbook!

Yields: 16 bars
These seven layer (or magic) bars are a lightened-up version of the traditional recipe and include a chocolate crust with caramel candies as a fun twist. They’re just as sweet, gooey and irresistible as the originals but are much nicer to your waistline!
Notes: Feel free to use your favorite toppings instead! Just remember that the Nutrition Information may change if you do.

If you do not have Truvia, substitute 1 tablespoon of sugar (or the equivalent of your favorite no-calorie sweetener).

Store any leftovers in an airtight container for up to 3 days. 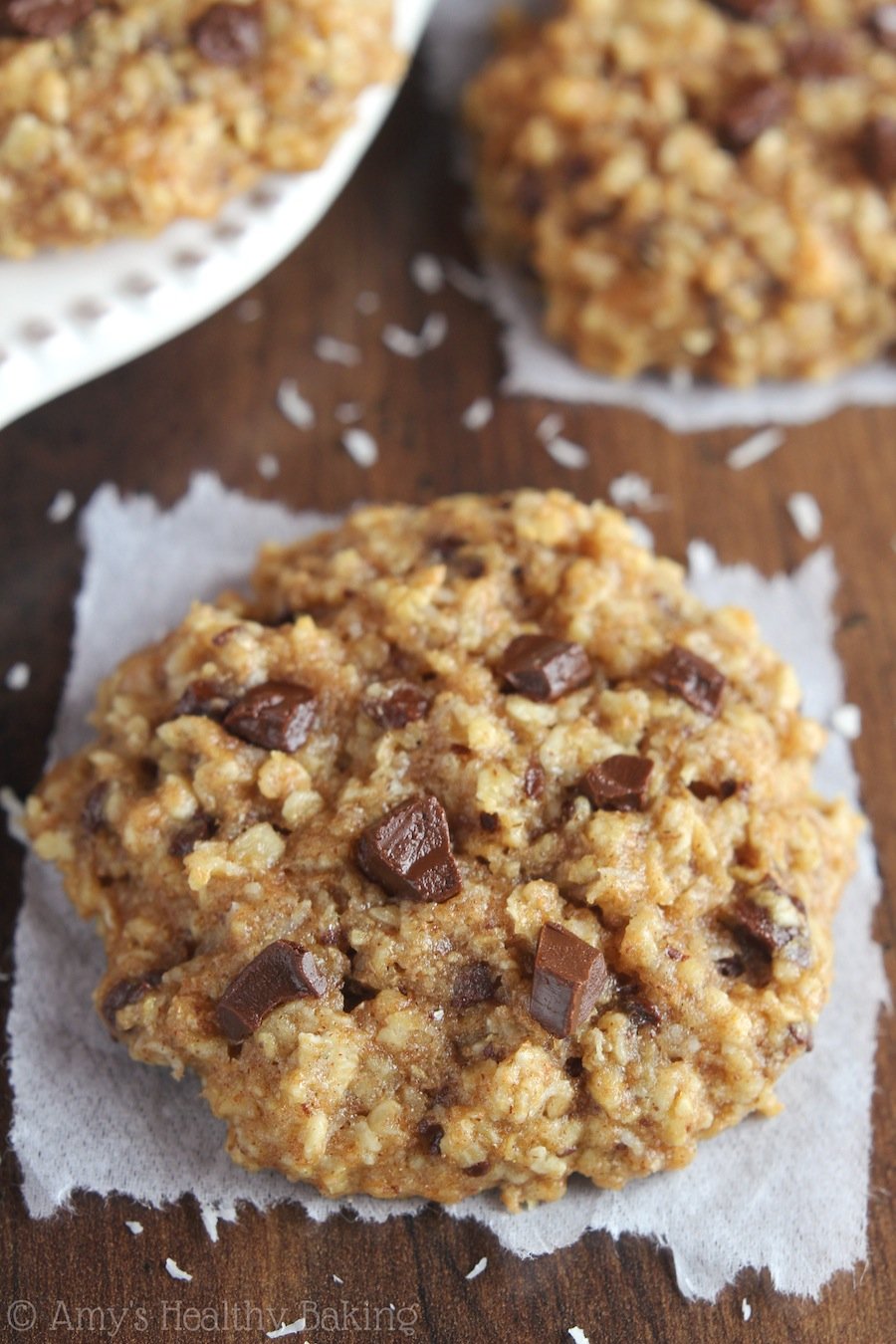 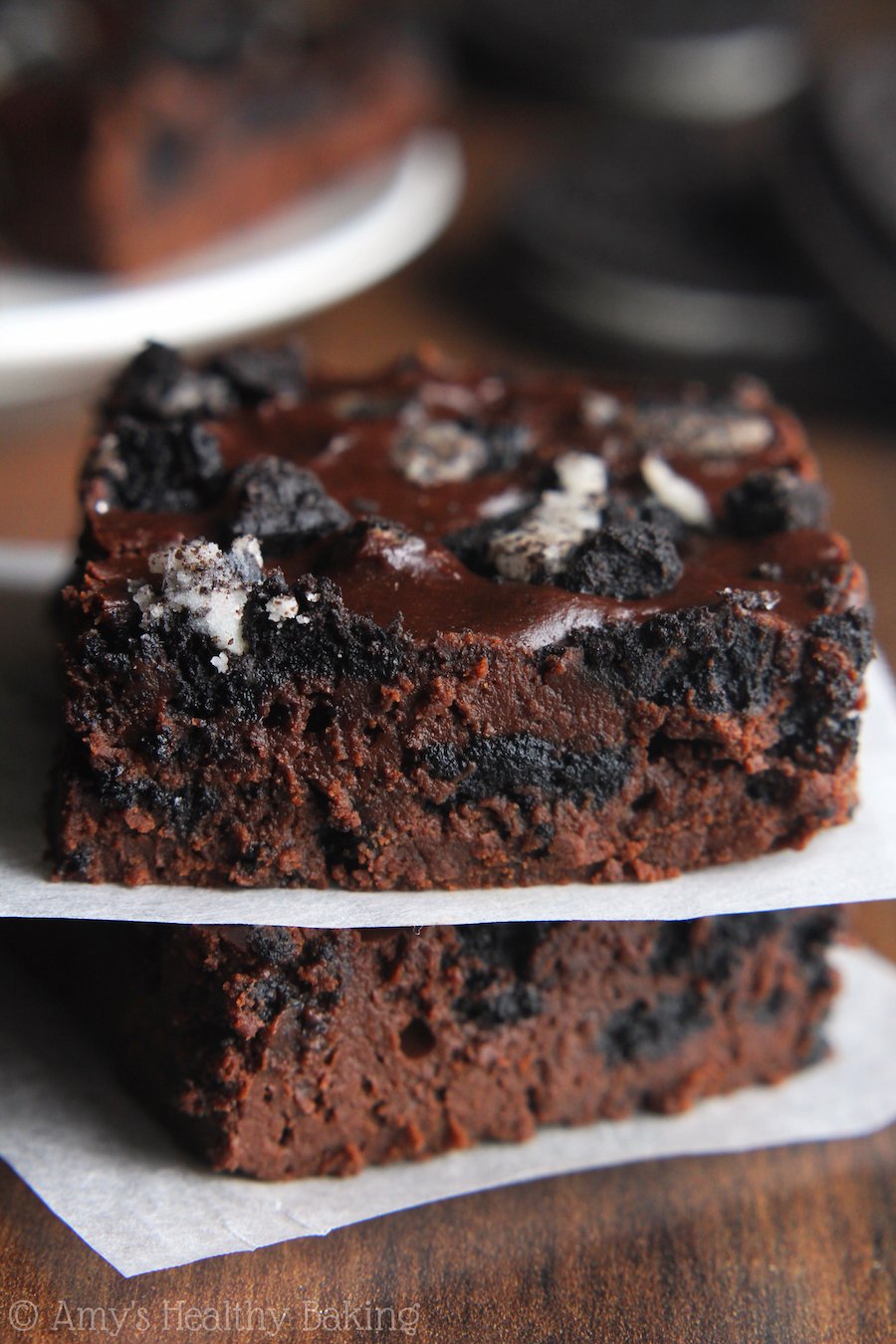 ♥   Classic Seven Layer Bars by Katie at the Kitchen Door

The Healthier Chocolate Treats cookbook is perfect for any and all chocolate lovers. Whether you enjoy chocolate occasionally or every single day (that’d be me!), there are plenty of goodies inside for you! Healthier Chocolate Treats contains 50+ brand new healthier recipes. These recipes have never been seen before or appeared on my blog. You won’t find them anywhere else! And yes—every single one contains some form of chocolate. Whether you prefer milk, dark or white, there are lots of treats inside for you!     What Inspired You to Write Healthier Chocolate Treats? I have always loved chocolate. Every Halloween throughout my childhood, I inverted the entire contents of my bright orange jack-o-lantern bucket … END_OF_DOCUMENT_TOKEN_TO_BE_REPLACED