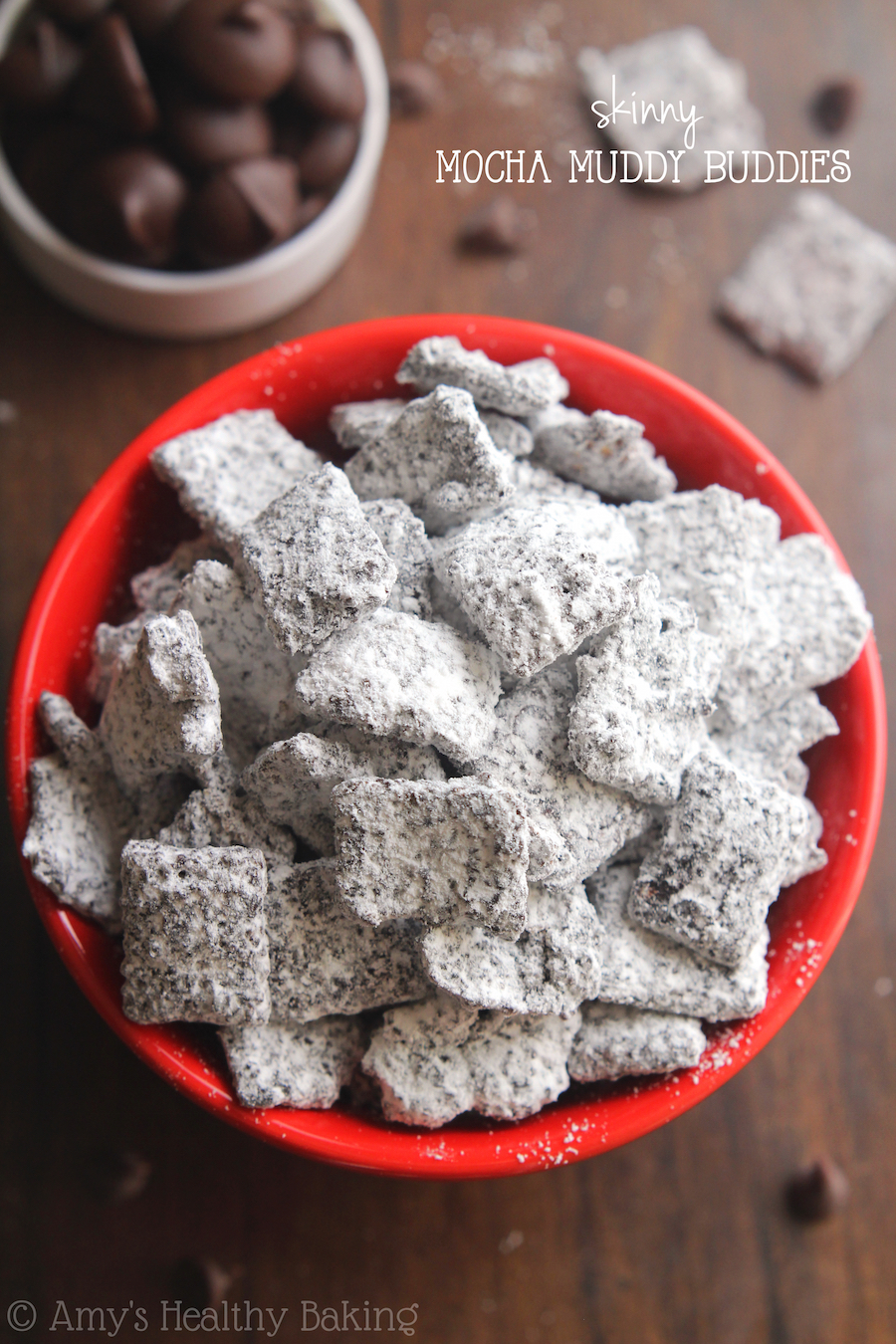 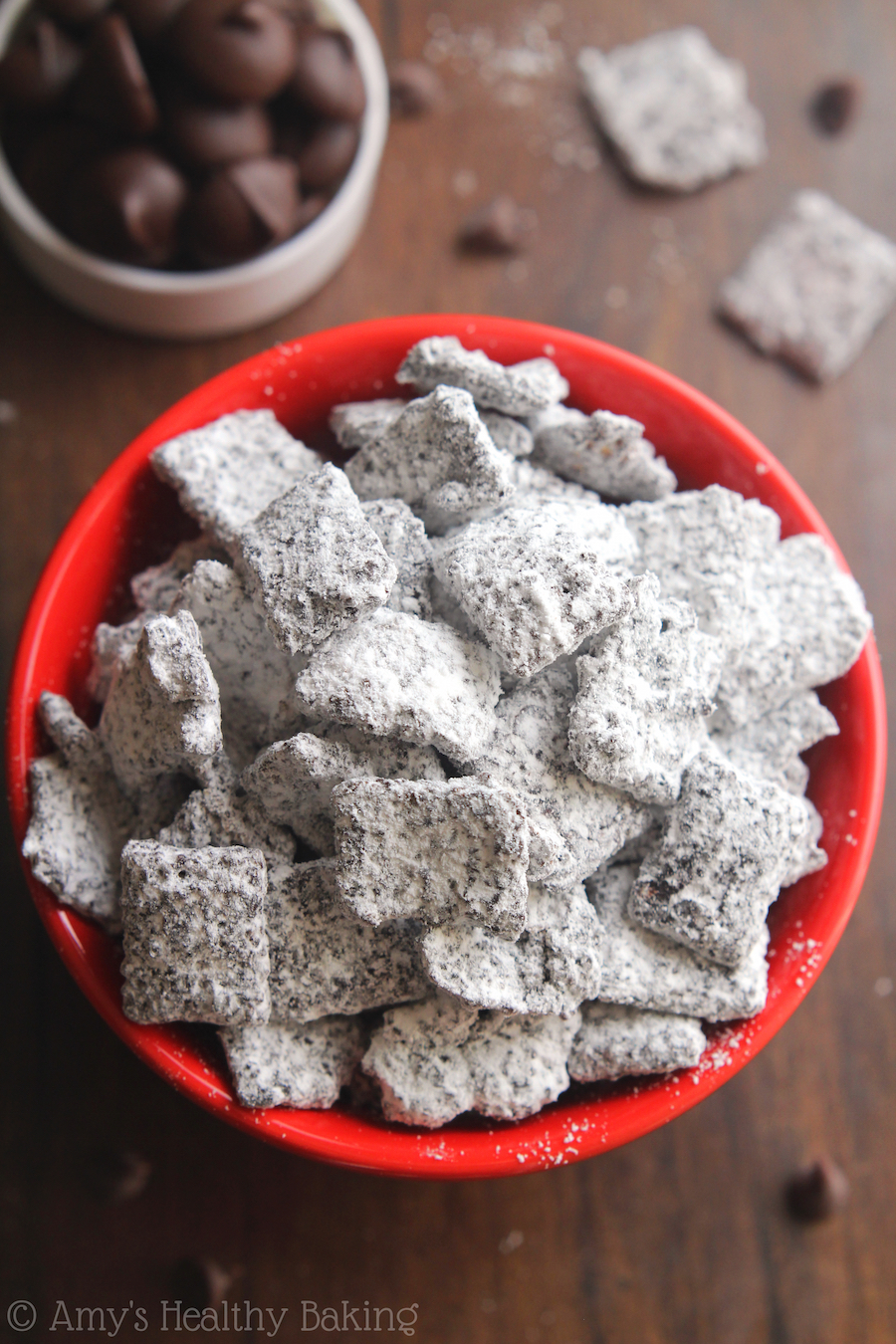 Just over two years ago, I tried coffee for the first time. Because I knew that the endless options on the Starbucks menu boards would easily overwhelm me (and they still sometimes do!), I asked my guy to go with me since he worked as a barista in college.

Armed with my coffee pro and a hazelnut latte coupon, I drove to the nearest Starbucks on a quiet spring afternoon, parked the car, and hesitantly climbed out. I double-checked my order with my guy on the sidewalk before pulling open the coffee shop door, trying my best to prevent tripping over my words at the counter, and bravely spoke to the lady in the green apron behind the register. 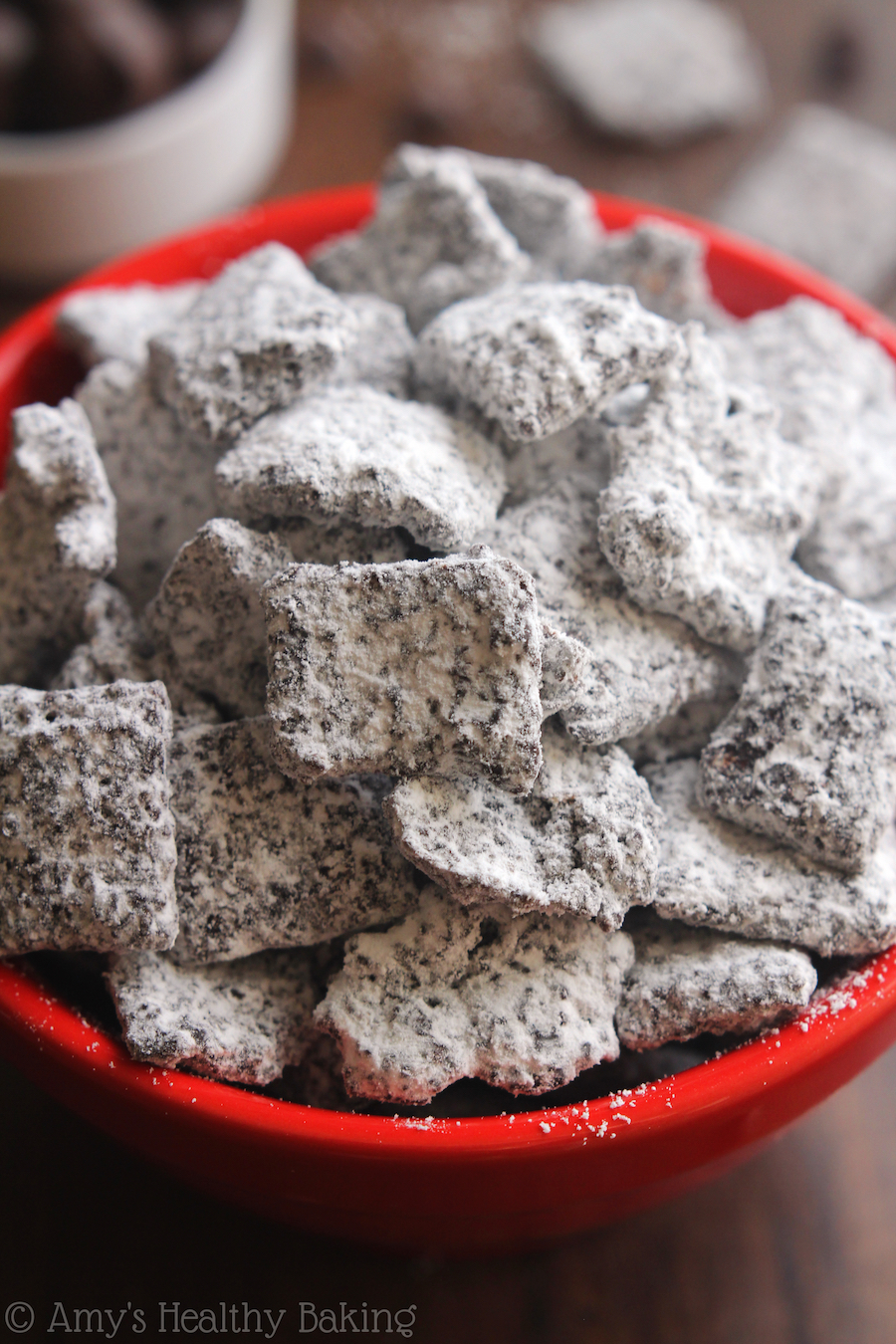 When our drinks arrived, we walked outside to find a table, and I clutched the piping hot cup, silently willing it to cool down so I wouldn’t burn my tongue. After taking a few sips of his mocha, my guy turned to me and asked what was wrong. As I muttered my fear of tongue burns, he laughed, grabbed my cup, and took the first sip.

Proving the temperature wasn’t at the molten-hot-lava stage that I believed, he handed my drink back, as well as offering his to compare the flavors. Although mine didn’t quite taste like Nutella (wishful thinking on my part!), I immediately fell head-over-heels for his. 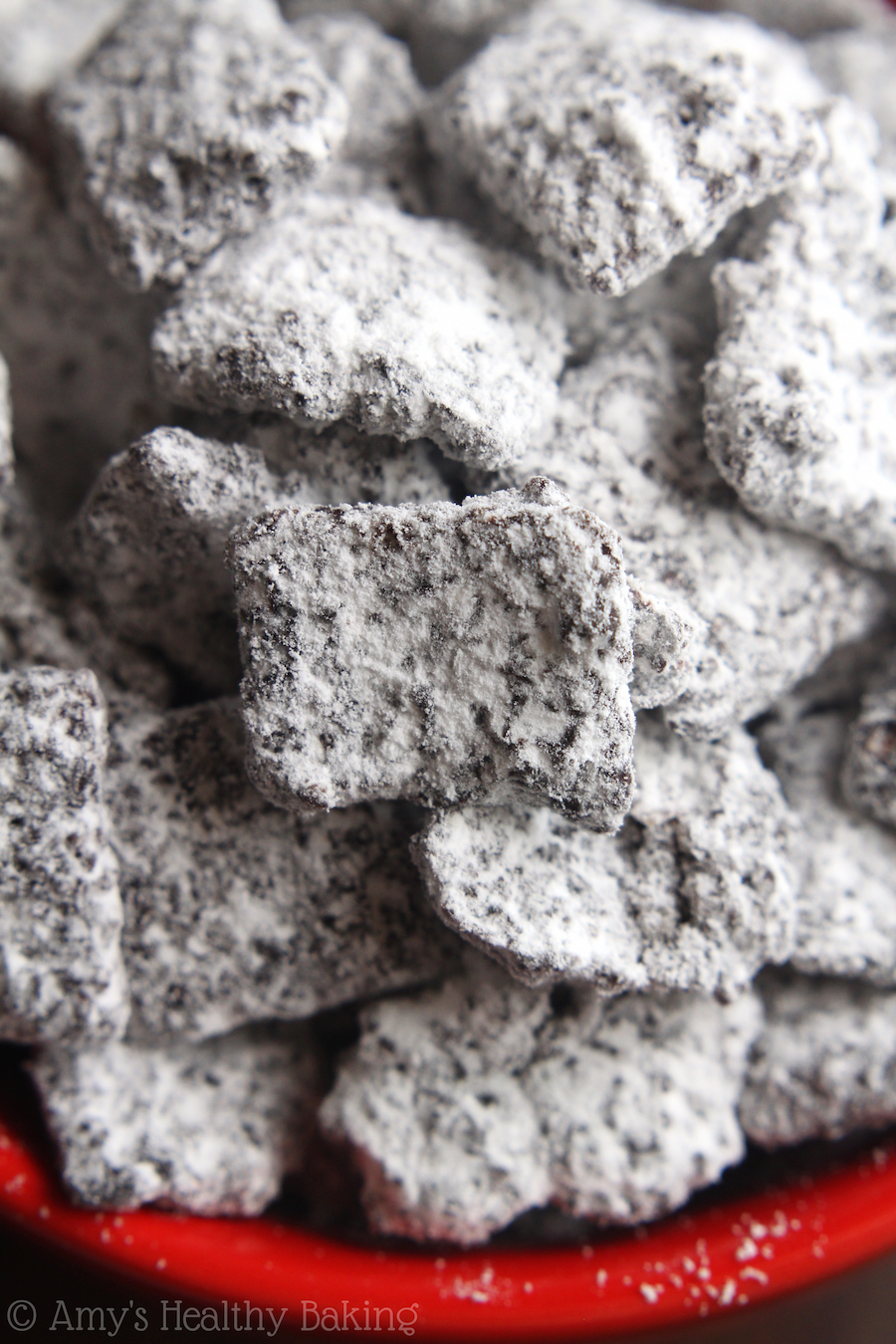 And thus began my love affair of all things mocha. Warm earthy coffee and decadently rich chocolate—what’s not to love?? I’ve turned it into fudge, granola, cookies (twice) and now this: Skinny Mocha Muddy Buddies! 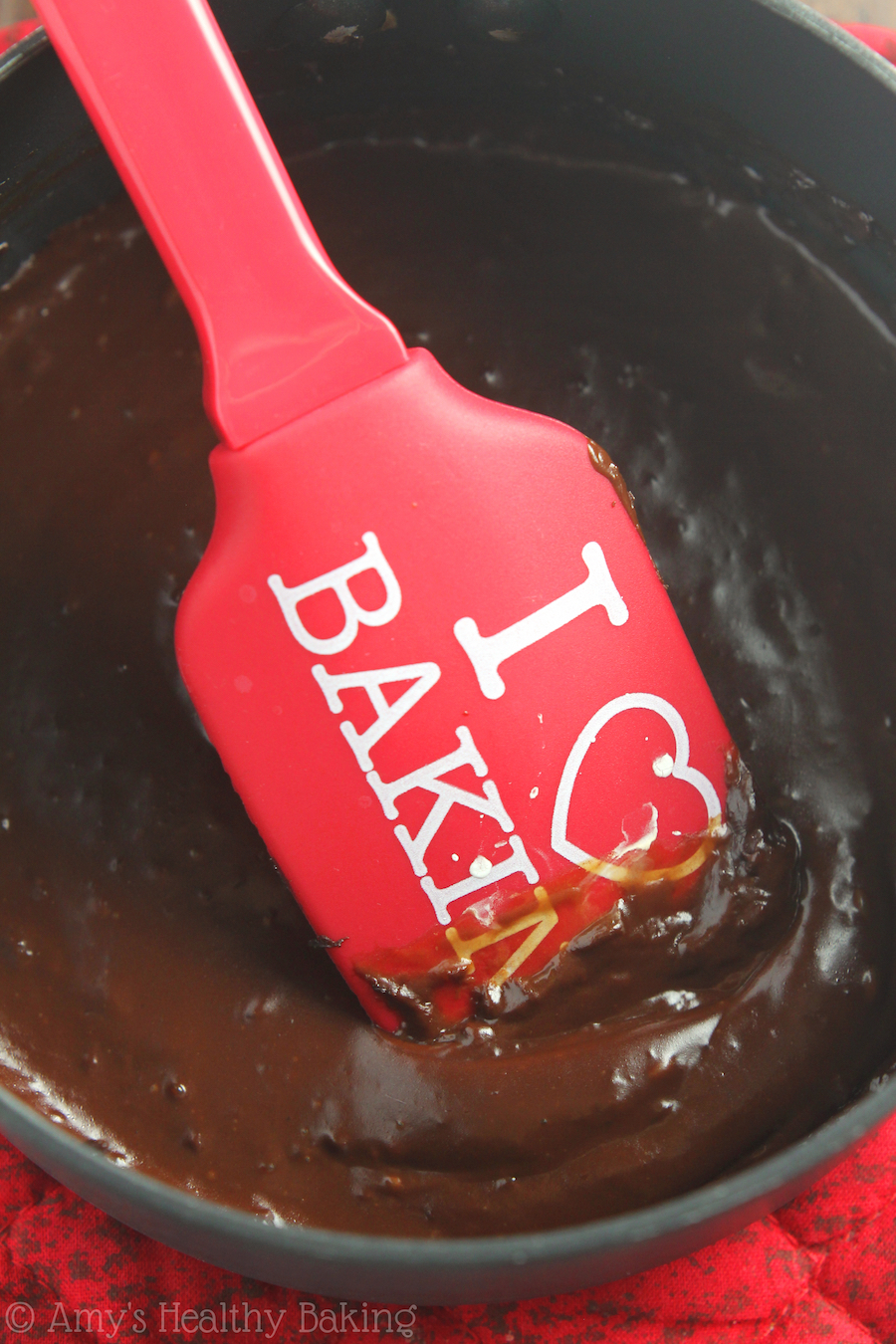 So I have a few tricks up my sleeve to lighten up the traditional treat. First, we’re eliminating the peanut butter (no need for that in a mocha!) and greatly reducing the amount of melted chocolate. Because ¼ cup doesn’t nearly cover all of the cereal, we’ll make a semi-pudding by heating it with milk and a little cornstarch instead.

But… The semi-pudding makes the cereal soggy, and nobody likes soggy muddy buddies. They’re meant to be crisp and crunchy when you bite into them—that’s half of what makes them so addictive! (The other half being the chocolate and powdered sugar, of course.) 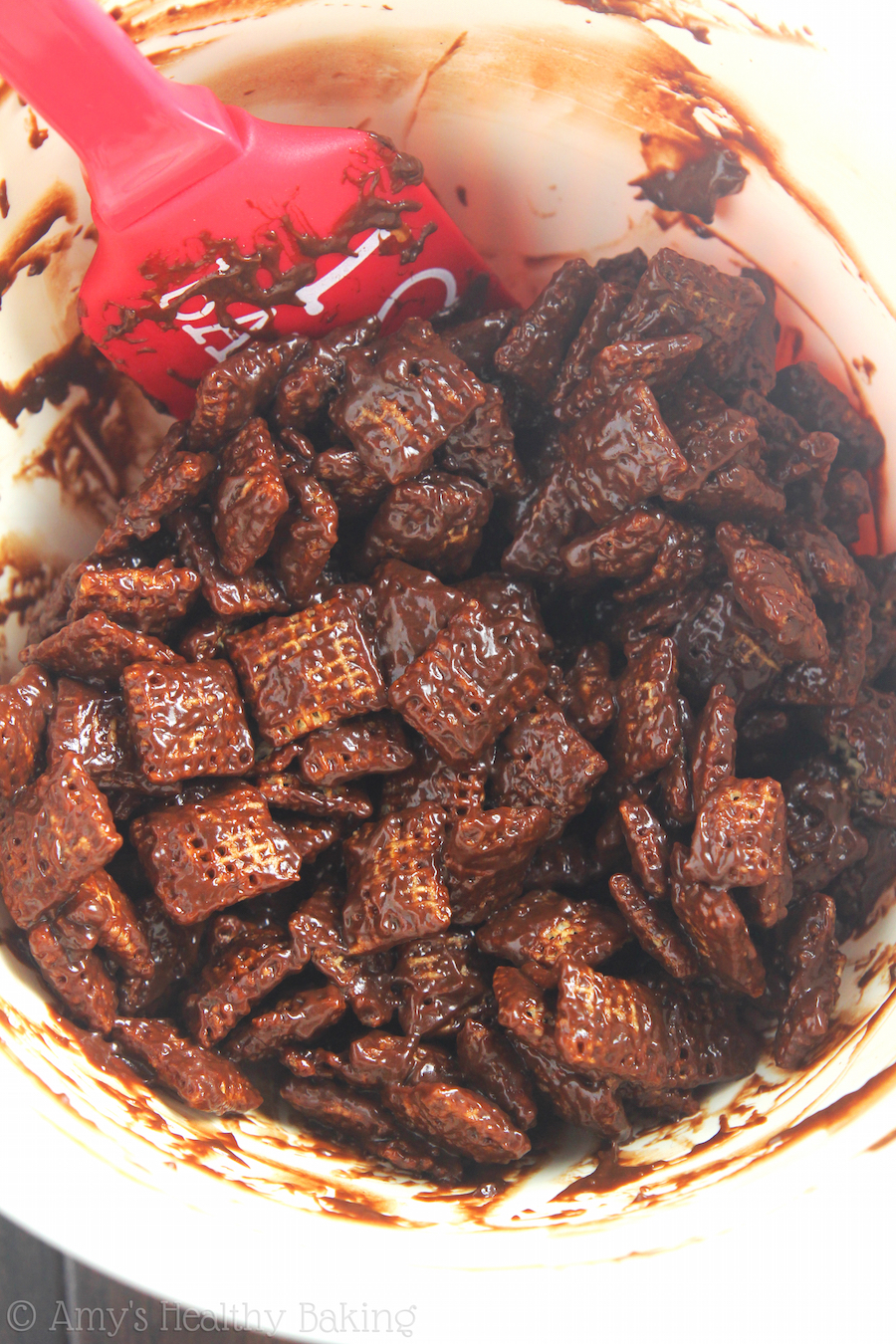 So we’re going to bake our muddy buddies in the oven! We’re basically treating them like granola: first you cover your cereal (oats for granola, rice pockets for muddy buddies) in a sweetened mixture; then you bake it to turn the cereal crunchy. And it works like a charm!

For the crunchiest muddy buddies, let them cool halfway through baking, and then break apart any large clusters into individual pieces of cereal before putting the pan back in the oven to continue baking. The semi-pudding makes the cereal clump together, and the pieces in the middle of those clusters would stay soggy unless you pull them apart. 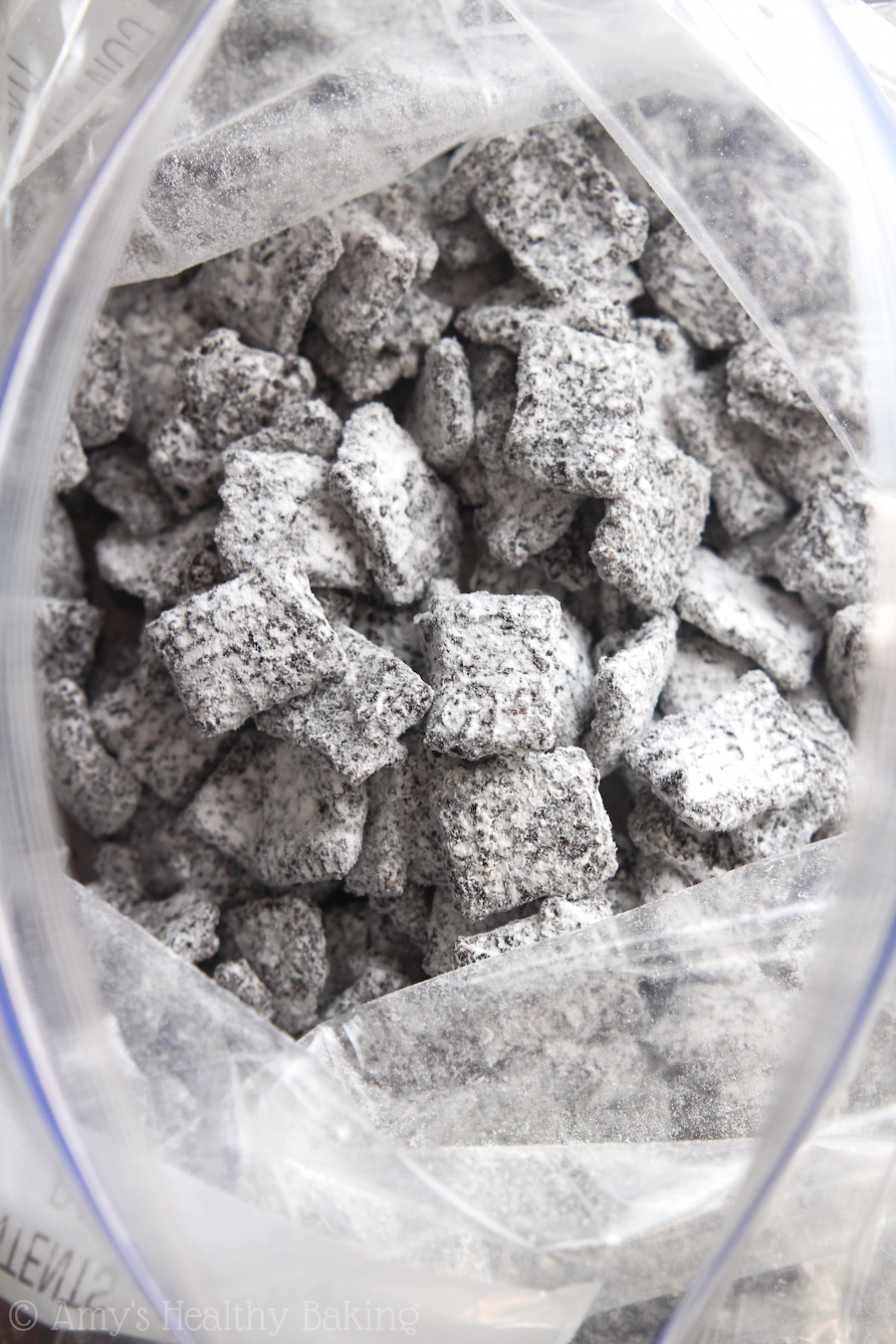 After one more round of baking, toss the mocha-y cereal into a large bag with powdered sugar, seal, and shake-shake-shake like you’re on the dance floor showing off your moves! When the cereal cools, you’ll have a sweet, chocolaty, crunchy reward for all of your baking and patience. 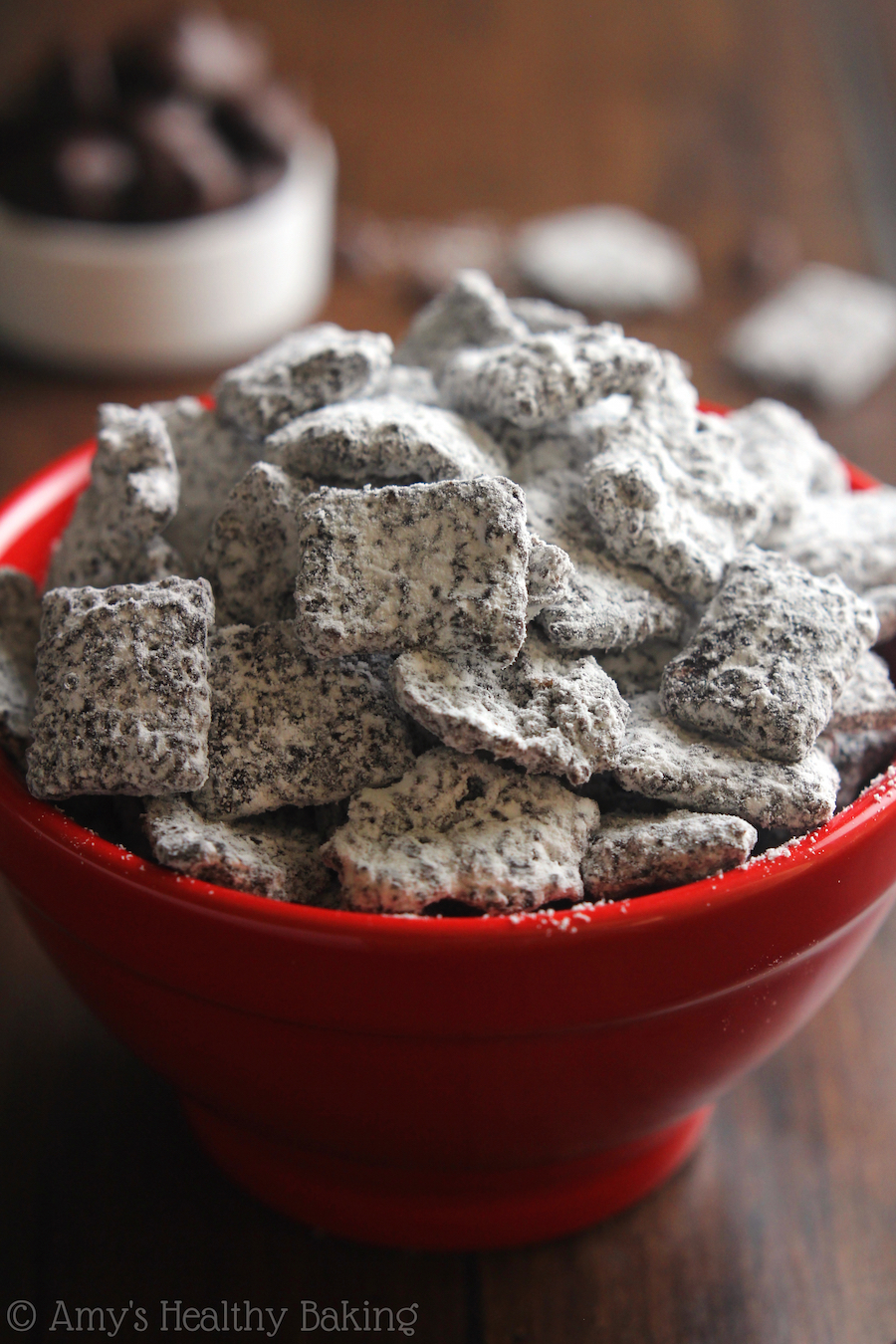 But just be warned… It’s hard to stop at just one handful!

Yields: 5 servings
Also called “puppy chow,” this sweet snack is absolutely irresistible! Crunchy rice pocket cereal is covered in coffee-flavored dark chocolate and lots of powdered sugar. It’ll stay crisp for up to 3 days if stored in an airtight container—if it lasts that long!
Notes: It’s REALLY important to constantly stir while adding the cornstarch slurry! If you stop stirring at all, you’ll end up with big congealed clumps in your milk and will need to start over.

You’ll have about 1-2 tablespoons of powdered sugar that’s left over, which is accounted for in the Nutrition Information.

For a vegan version, substitute your favorite non-dairy milk. 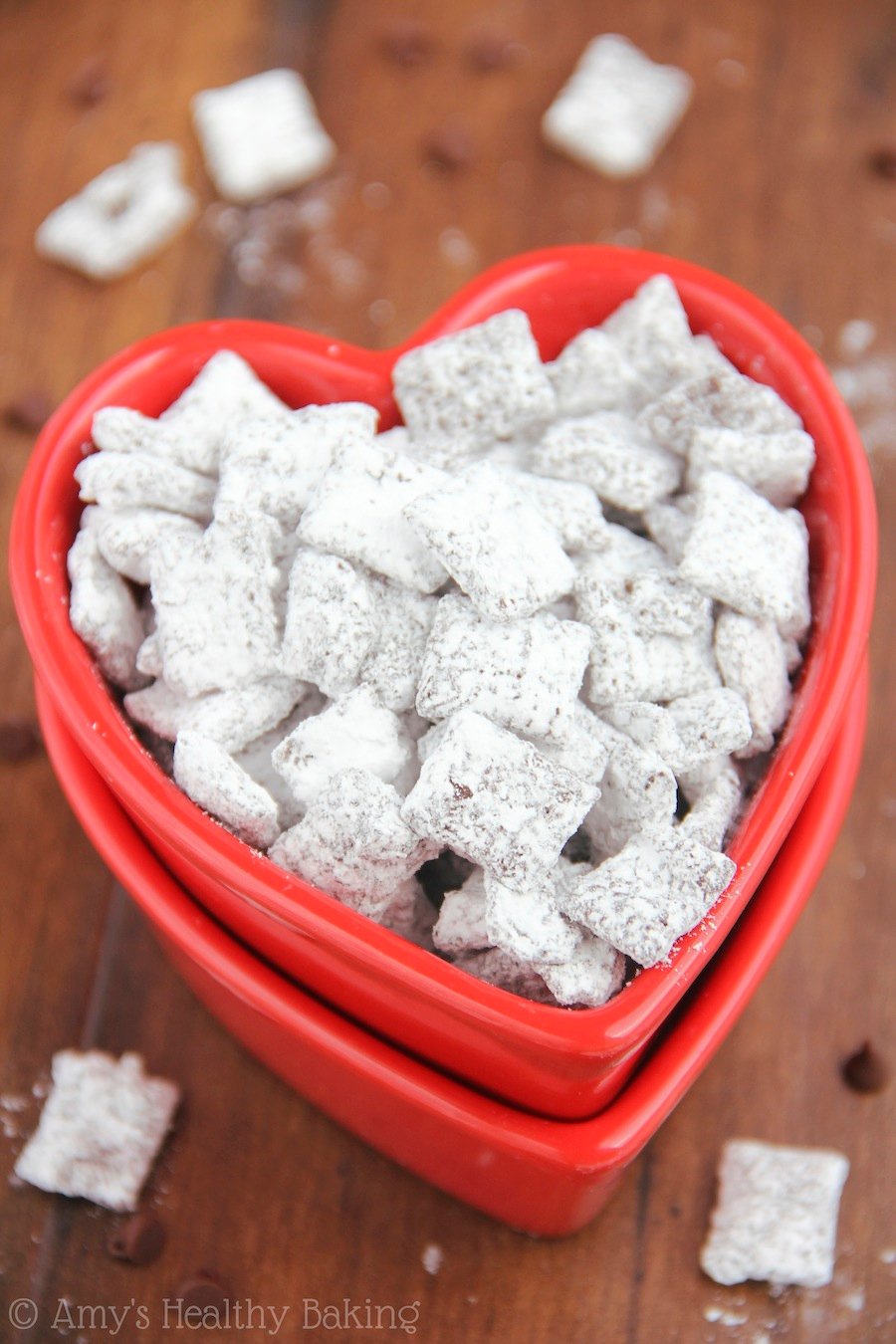 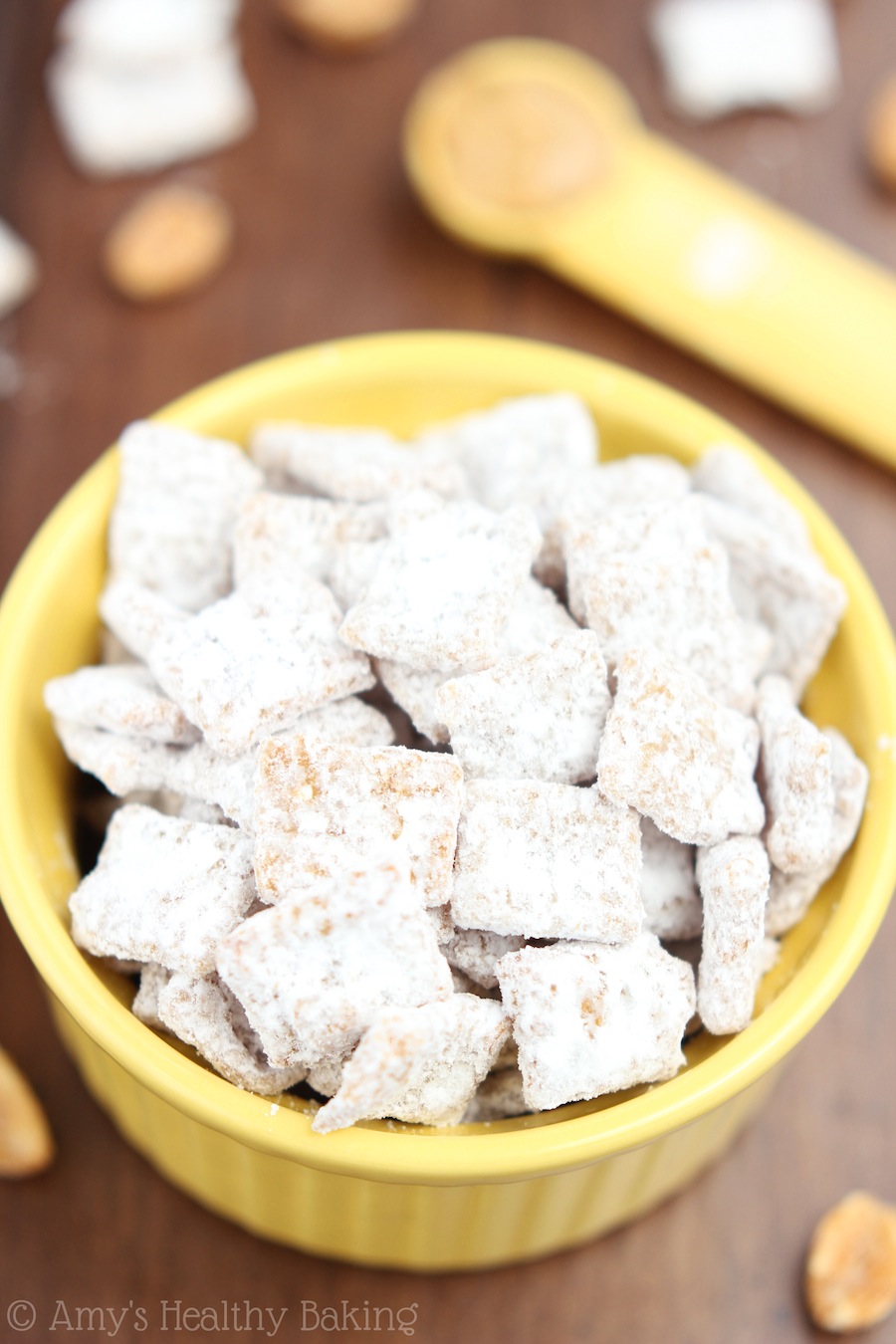 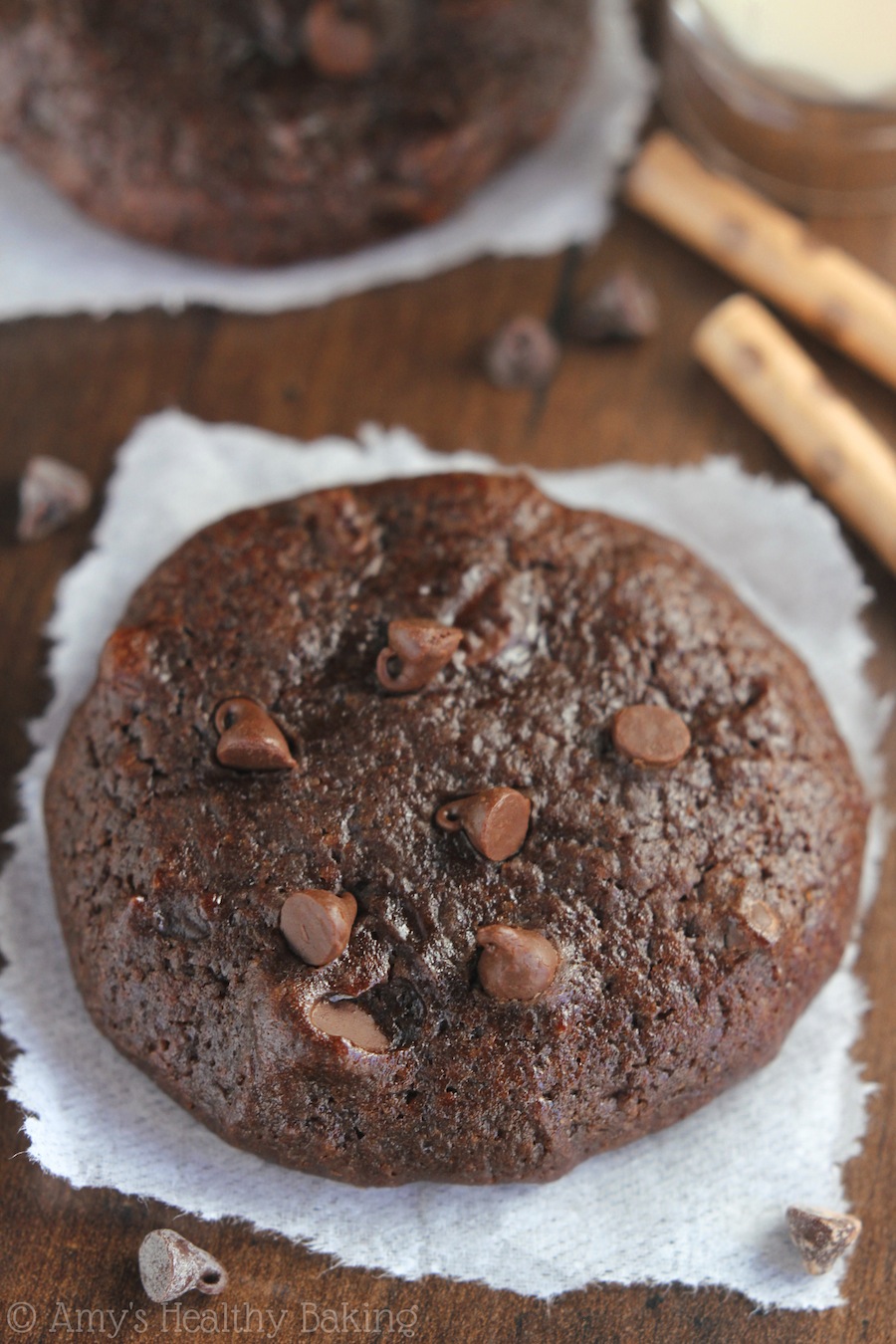 ♥   Scotcheroo Muddy Buddies by Something Swanky

The Healthier Chocolate Treats cookbook is perfect for any and all chocolate lovers. Whether you enjoy chocolate occasionally or every single day (that’d be me!), there are plenty of goodies inside for you! Healthier Chocolate Treats contains 50+ brand new healthier recipes. These recipes have never been seen before or appeared on my blog. You won’t find them anywhere else! And yes—every single one contains some form of chocolate. Whether you prefer milk, dark or white, there are lots of treats inside for you!     What Inspired You to Write Healthier Chocolate Treats? I have always loved chocolate. Every Halloween throughout my childhood, I inverted the entire contents of my bright … END_OF_DOCUMENT_TOKEN_TO_BE_REPLACED