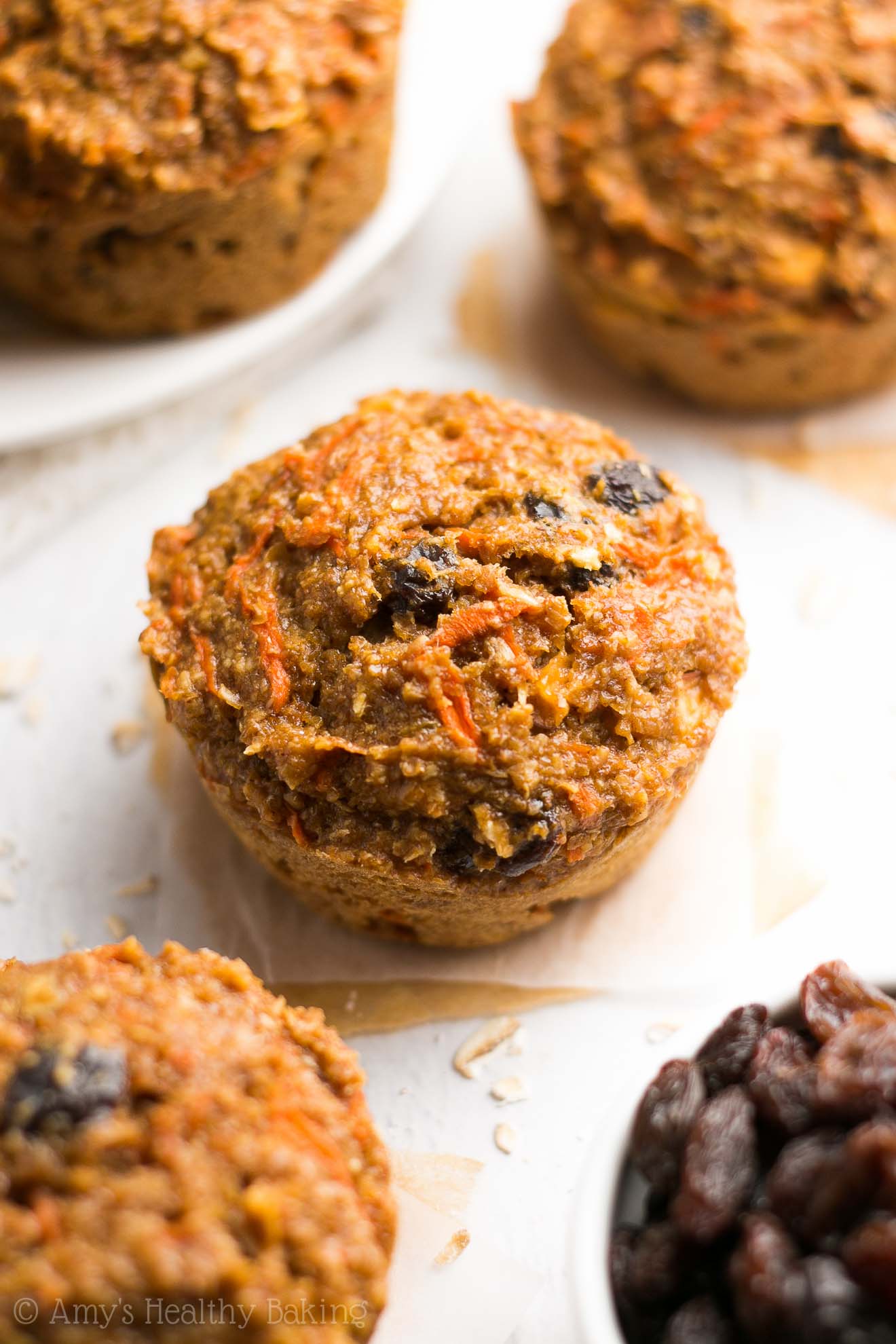 During my sophomore year of college, I lived in an apartment located about a mile away from campus along with three other girls. Nearly every morning after turning off my alarm clock, I climbed down the ladder of my lofted bed, pulled on my workout clothes, and headed out the door for a run.

Still half asleep and not quite fully coherent, I typically stuck with the same route (I lacked the brainpower to remember new directions and street names that early in the morning!). I followed the asphalt path that meandered around a few different parks in the residential neighborhoods behind our apartment complex, mentally picking out my favorite houses as I passed by the quiet roads. 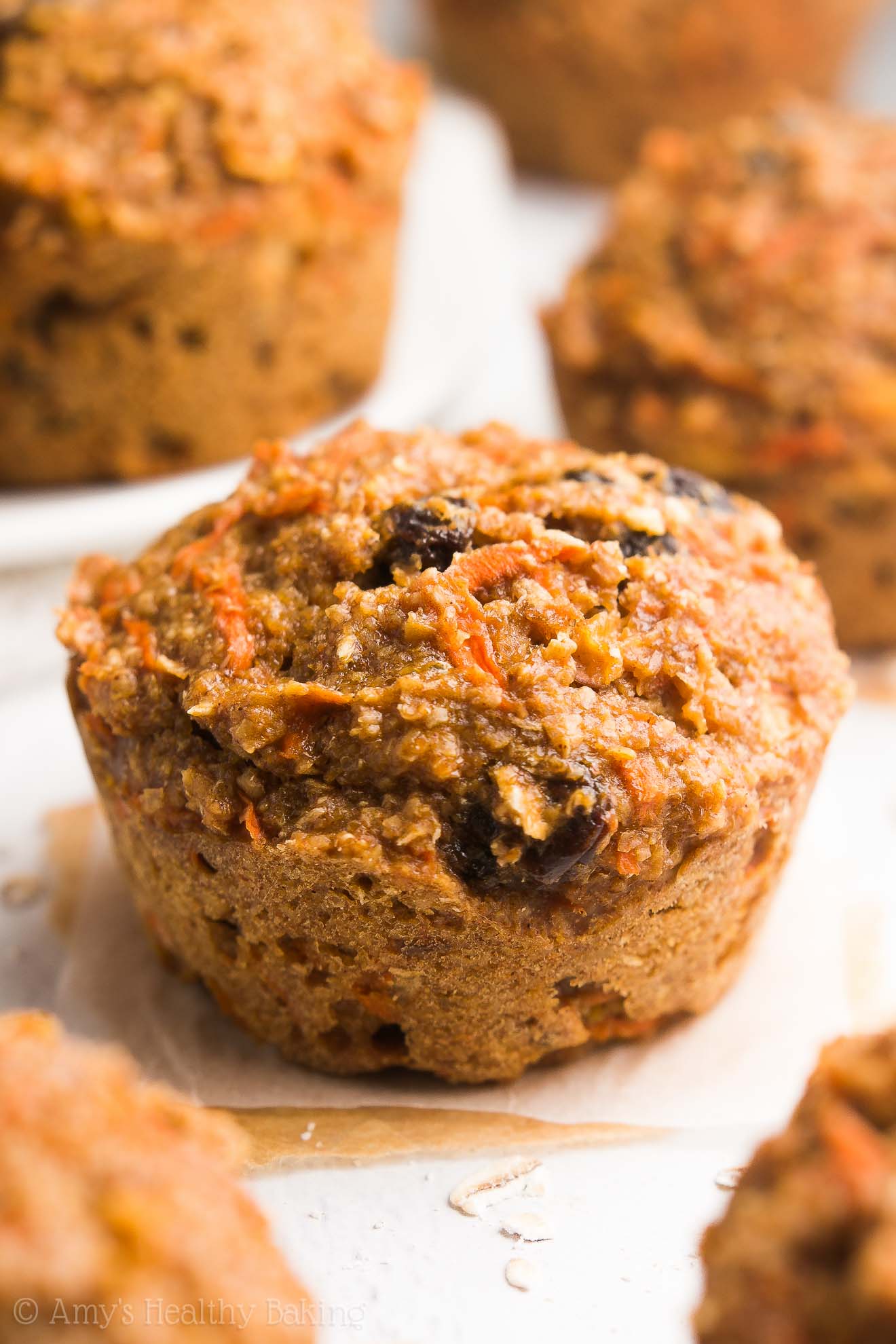 For about two weeks during the early spring and again in the late summer, I really looked forward to a particular stretch of my route. A long straight section, bordered by the houses’ wooden backyard fences on the right and an empty riverbed on the left, it pointed due east.

Since I started my run at almost the same time every single day, the bright yellow sun was just starting to peek out over the horizon as I jogged down that stretch during those four special weeks, painting the sky with soft pinks and tangerine hues, while the deep purple of the night began to fade.

I felt like I was witnessing an artist at work as those rich colors of dawn rippled farther and farther across the dawn sky, and on those days, I always finished my run full of peace and inspiration. 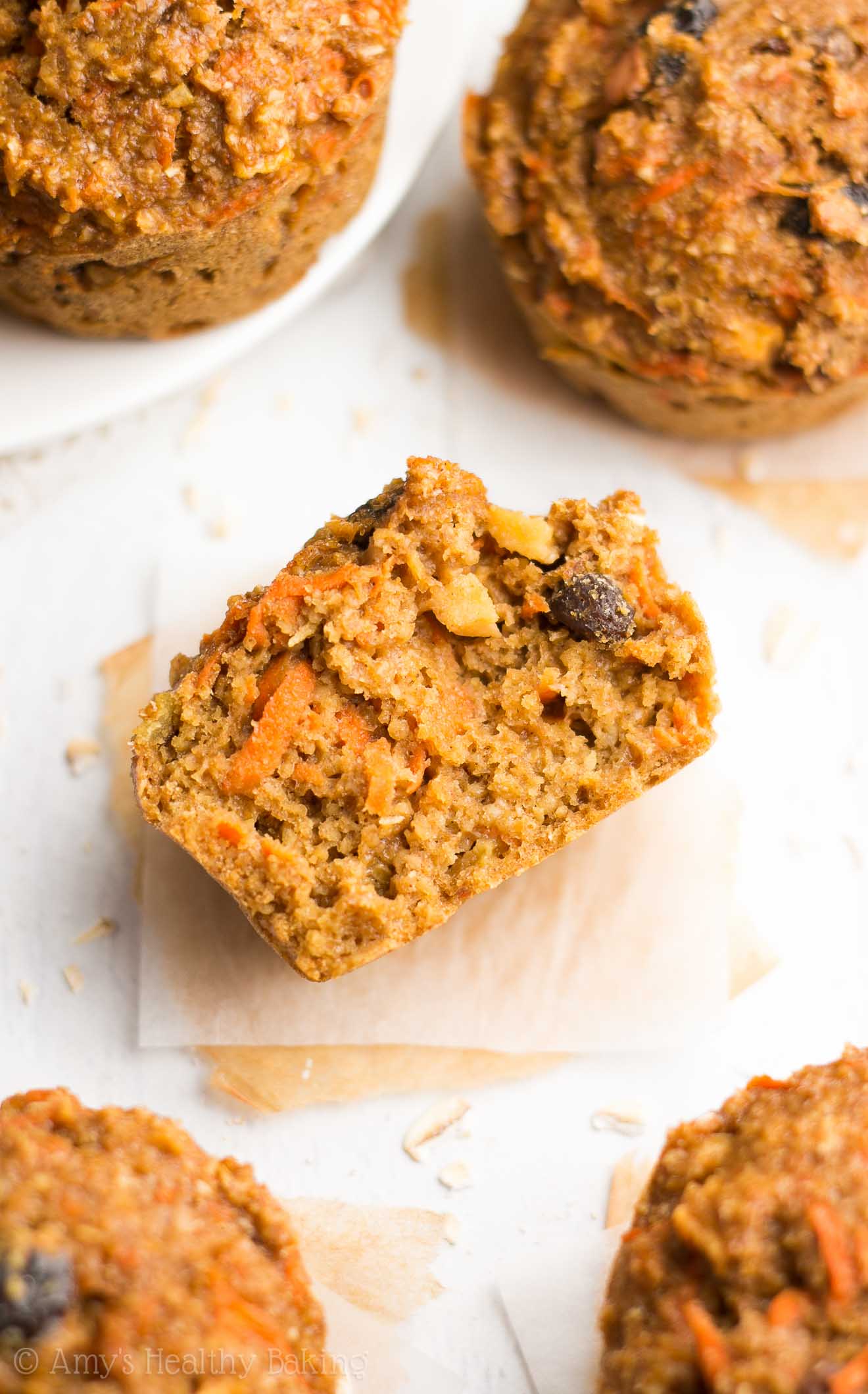 Once I returned home and showered, I typically poured myself a small bowl of my favorite Trader Joe’s cereal to slowly savor as my post-workout fuel, but these Morning Glory Bran Muffins would have been the ideal breakfast for those mornings—and not just because of their name! Full of healthy ingredients and cozy cinnamon, their comforting flavors pair perfectly with the crisp morning air of my runs, and both of my parents even called them the best muffins they’ve ever had.

That’s high praise, coming from them! 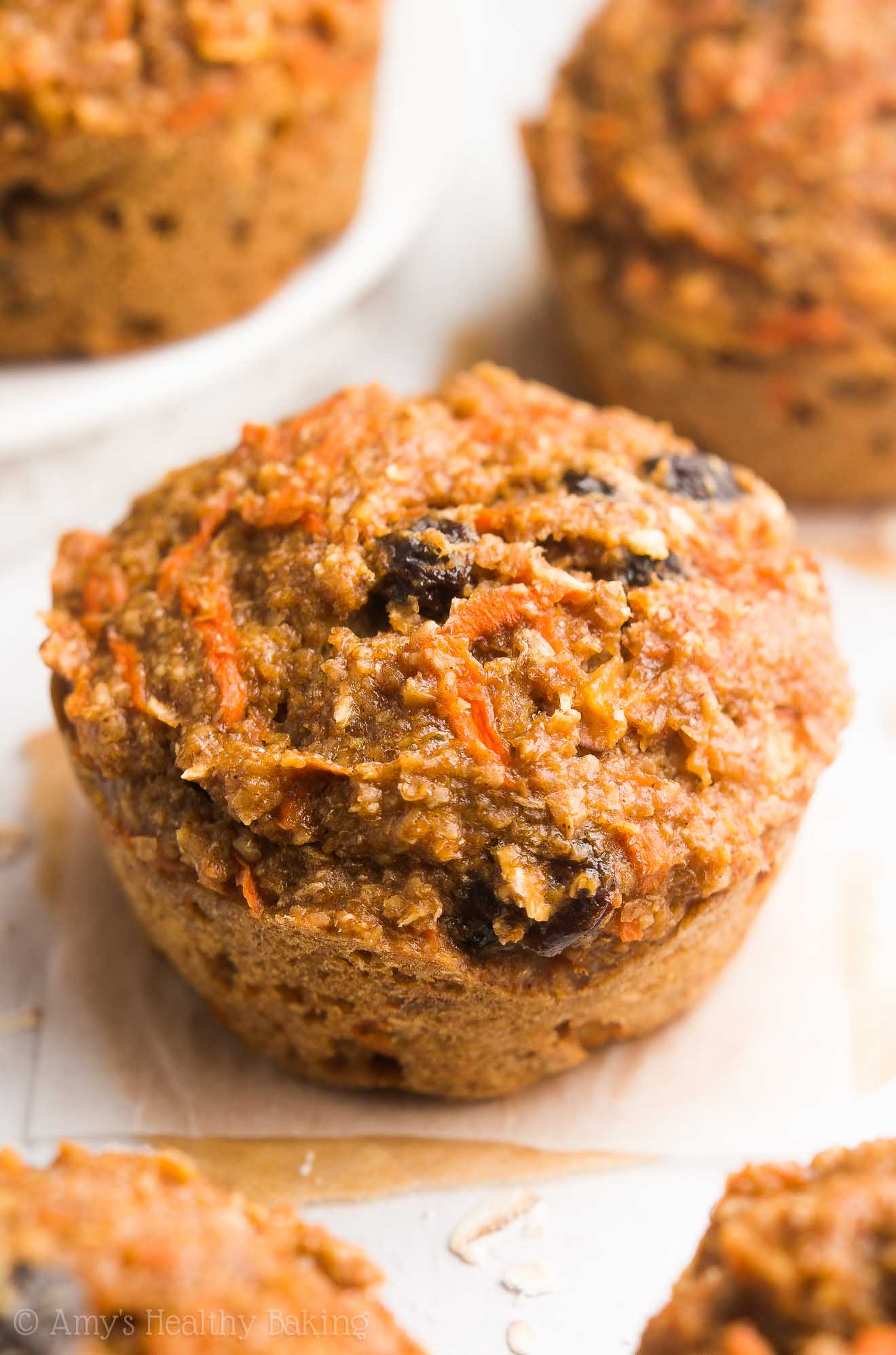 Chef Pam McKinstry created the original recipe for morning glory muffins, named after the Morning Glory Café where she worked. The muffins included a little bit of everything: carrots, apples, raisins, nuts, and coconut… As well as way too much oil, refined flour and sugar for my tastes. So let’s talk about how we’re gong to make this healthier version!

You’ll start with oat bran. (Or wheat bran—both work equally well!) Although the original recipe didn’t include bran, I absolutely love bran muffins and thought it’d be a fun addition. I also have a secret trick to making the best bran muffins… 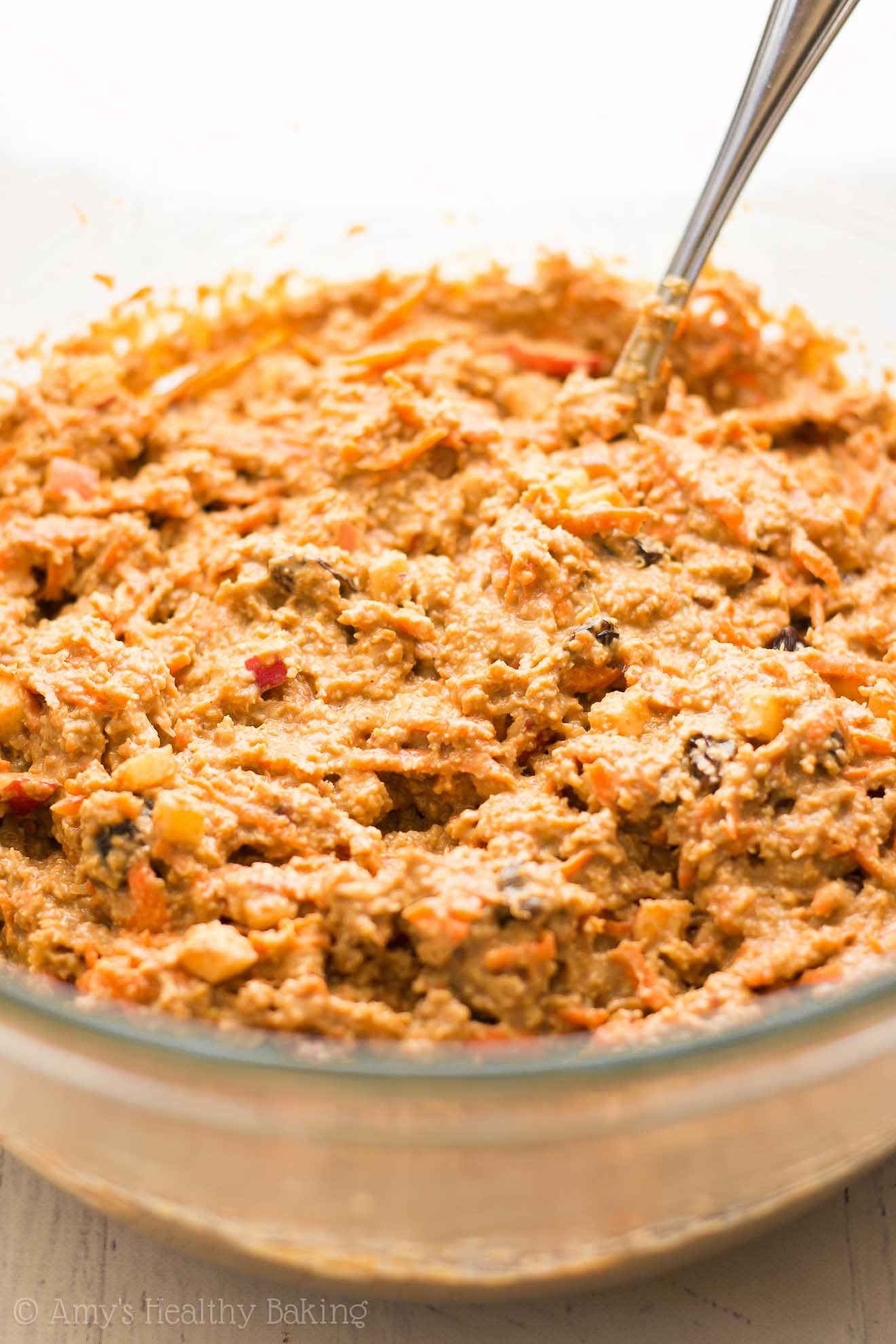 You’ll soak the oat bran in a mixture of Greek yogurt, milk, and vanilla while measuring and mixing together the other ingredients! This trick softens the oat bran (similar to how all of my protein-packed overnight oat recipes work), which makes your bran muffins extremely tender. Trust me—this simple tip makes these muffins absolutely irresistible!

Even better, the Greek yogurt adds the same moisture as extra butter or oil for a fraction of the calories, so you just need 1 tablespoon of coconut oil. Yes, that’s it! Greek yogurt also adds a protein boost because it contains around 21g of protein per cup, as compared to regular yogurt with around 10g. There’s a reason Greek yogurt is one of my favorite ingredients in healthier baking!

Instead of white flour, you’ll use whole wheat flour Just regular ol’ whole wheat flour! This is the kind that I buy because it’s relatively inexpensive and easy to find at most grocery stores where I live in the US. I’ve also included my recommended gluten-free flour blend in the Notes section, if you prefer that instead. 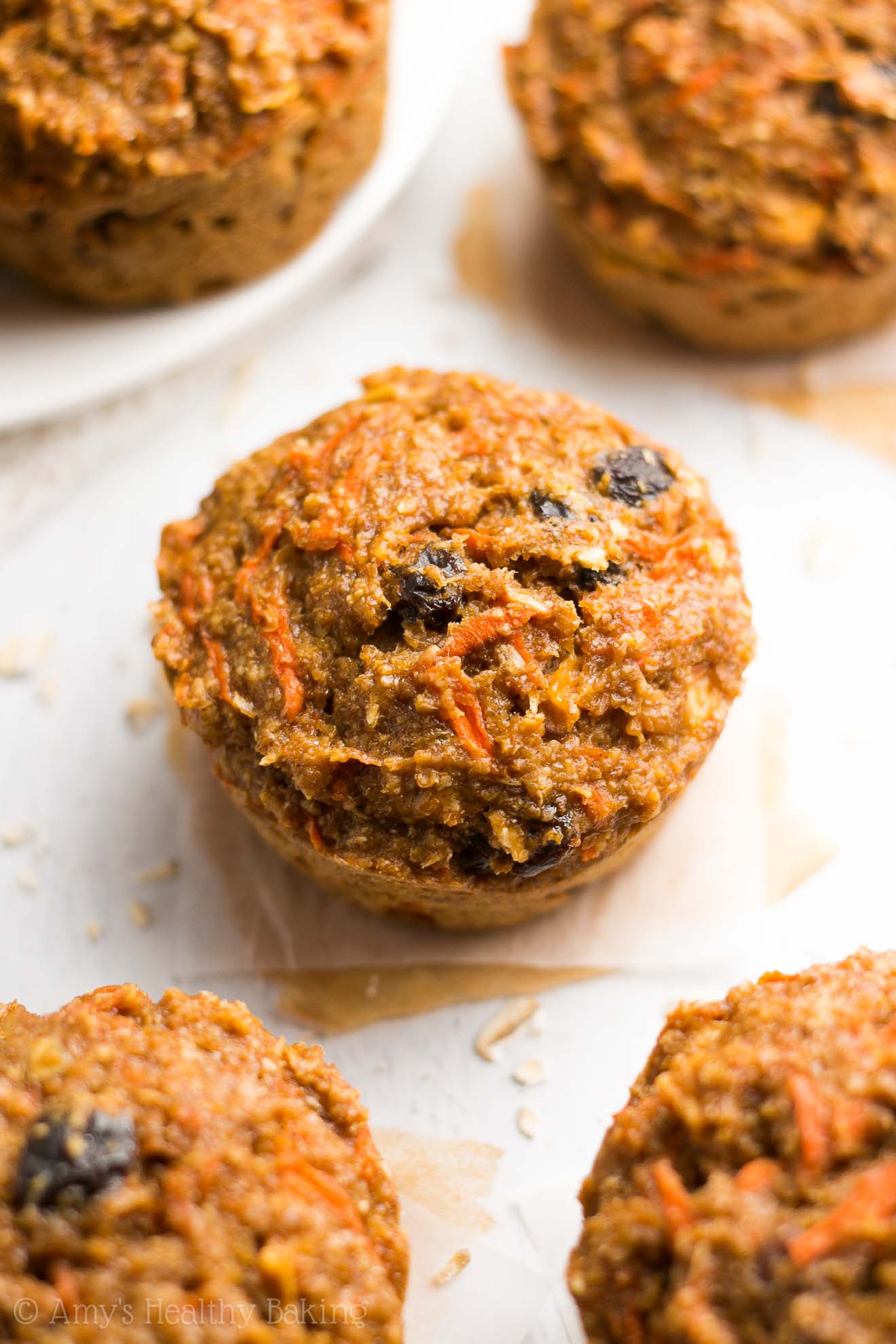 We’re also skipping the refined sugar today, so you’ll sweeten these healthy muffins with a combination of pure maple syrup and molasses. Be sure you buy the good stuff when it comes to maple syrup! Skip the pancake syrups or sugar-free syrups. Pure maple syrup generally comes in thin glass bottles or squat plastic jugs, and the only ingredient on the label should be “maple syrup.” I’ve even bought it in bulk online before at a cheaper price.

The molasses is what gives bran muffins their characteristic rich, warm flavor, so please don’t skip it! It’s shelf-stable and keeps for ages, and you can usually find it near either the honey or the maple syrup at the grocery store. (This is the kind I buy.) You’ll use it in all of my bran muffin recipes, as well as all of my gingerbread recipes. It’s a mandatory ingredient in gingerbread, too! 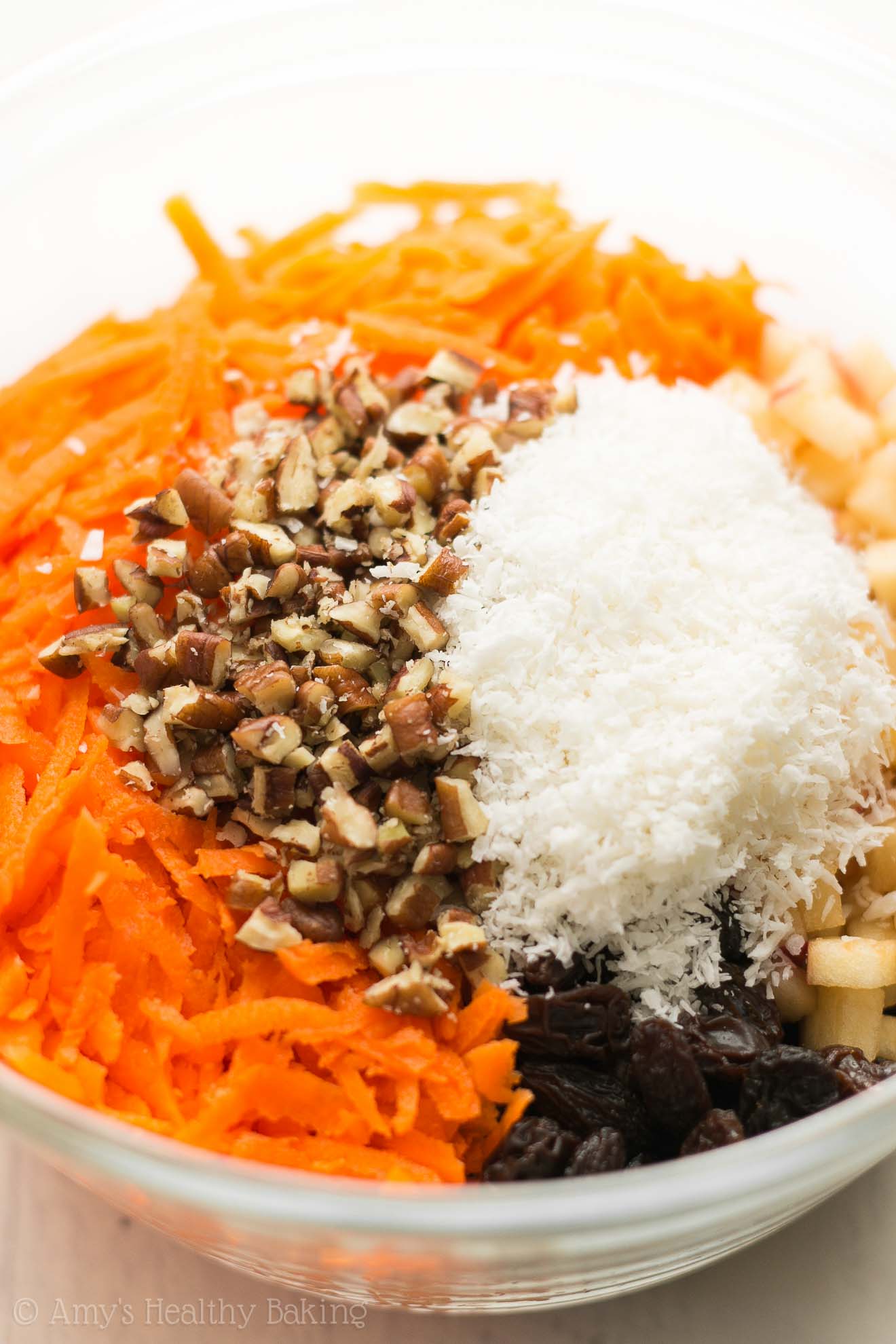 And now for the part you’ve been waiting for… The mix-ins! You’ll stir in shredded carrots, diced apple, raisins, diced pecans, and shredded unsweetened coconut. Whew! That’s quite a mouthful to say… And an even tastier one to eat! My dad’s eyes lit up as he took bite after bite. “These are my kind of muffins!” he exclaimed as he tasted each of those ingredients.

And after he ate three, my mom claimed another four, leaving almost none for me… I’d say that’s a pretty good sign, wouldn’t you??

And when you make your own, remember to snap a picture and share it on Instagram using #amyshealthybaking and tagging @amyshealthybaking IN the photo itself! (That guarantees I’ll see your picture! ?) I’d love to see your muffins and feature them in my Sunday Spotlight series!

Click here to PIN the recipe and save it for later!
Yields: 12 muffins
These wholesome muffins are the perfect way to start the day! They’re supremely tender and full of cozy flavors… And all of those mix-ins makes them absolutely irresistible! The muffins will keep for at least a week if stored in an airtight container in the refrigerator, and they freeze really well, too.
Notes: Wheat bran may be substituted for the oat bran.

For the gluten-free flour, use the following blend: ½ cup (60g) millet flour, ¼ cup (30g) tapioca flour, ¼ cup (30g) brown rice flour, and ¾ teaspoon xanthan gum. Most store-bought blends should also work, as long as they are measured like this.

Any milk (including non-dairy) may be substituted for the nonfat milk.

Do not substitute store-bought pre-shredded carrots. They’re too thick and dry, and they’ll dry out your muffins.

Both red or green apples will work. When cutting the apple, make sure the pieces are no larger than the raisins to ensure the muffins bake properly.

Any nuts may be substituted for the pecans.

I’m not a huge fan of nuts or coconut in my muffins, which is why there’s very little of them. You’re welcome to add more, if you prefer!

The Healthier Chocolate Treats cookbook is perfect for any and all chocolate lovers. Whether you enjoy chocolate occasionally or every single day (that’d be me!), there are plenty of goodies inside for you! Healthier Chocolate Treats contains 50+ brand new healthier recipes. These recipes have never been seen before or appeared on my blog. You won’t find them anywhere else! And yes—every single one contains some form of chocolate. Whether you prefer milk, dark or white, there are lots of treats inside for you!     What Inspired You to Write Healthier Chocolate Treats? I have always loved chocolate. Every Halloween throughout my childhood, I inverted the entire contents of my bright orange jack-o-lantern bucket … END_OF_DOCUMENT_TOKEN_TO_BE_REPLACED