Learn how to make healthy cinnamon rolls from scratch with fresh strawberry filling! They’re light & tender, even with no refined flour or sugar, and only 95 calories!
Click here to PIN the recipe and save it for later! 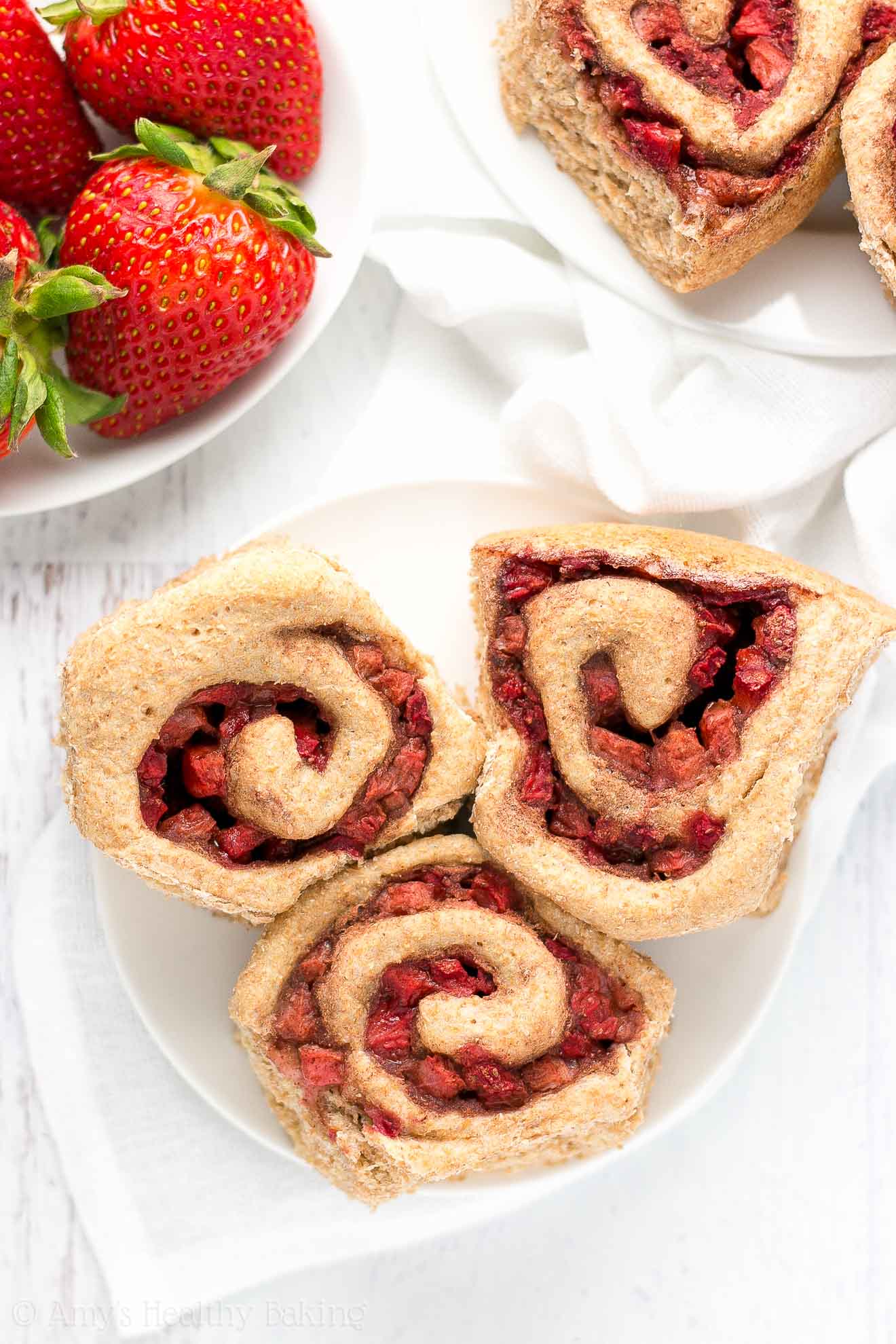 I’m partnering with Red Star Yeast® to bring you today’s recipe! I’m the biggest fan of their products. They’re the only yeast products I use in my baking!

During my most recent trip to visit my parents, I mentioned to them that I wanted to buy planter boxes for my back patio to give it a little color. Mom immediately volunteered to drive down to help fill them with flowers; she loves planting new blooms all around their front and back yards every spring!

That afternoon, we stopped by Home Depot and wandered around their garden section, and I snapped pictures of my favorite flowers with my phone. As an incredibly indecisive person, I wanted to preview many of the options so I’d be able to pick out what I wanted for my own planter boxes by the time Mom came down! 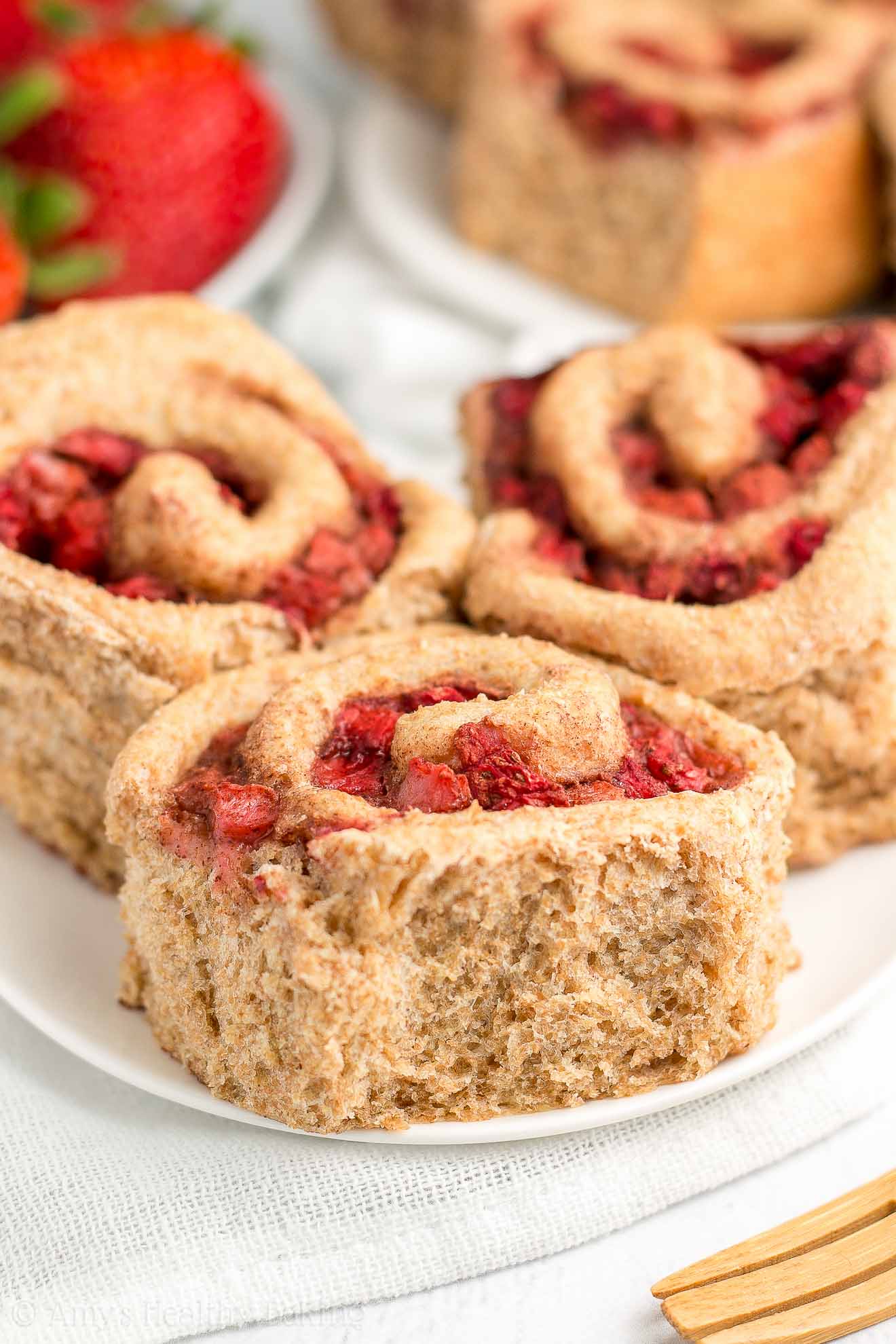 The following weekend, Mom and I picked up the dark brown planter boxes I had picked out, along with lots of soil and plenty of colorful flowers. Thank goodness Mom drove down their SUV—there’s no way we could’ve fit all that in my small car!

Back at my house, we unloaded everything and started working on filling each planter box. Thank goodness my patio gets afternoon shade… We were out there for hours! Yet by the end of the day, my little stone patio was completely surrounded by beautiful blooms, like my own little paradise. 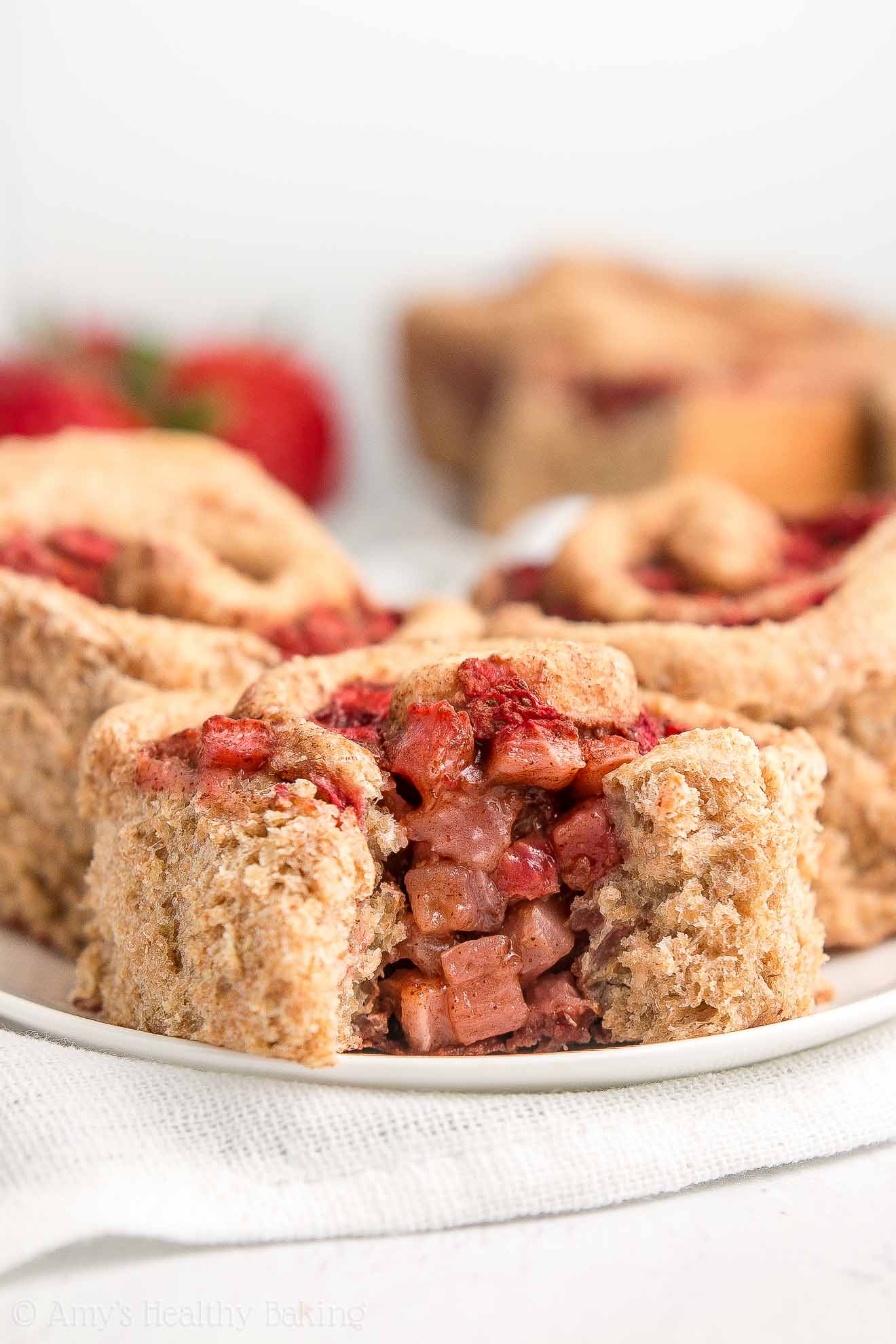 As a huge thank you for all of her gardening help—and an early Mother’s Day treat—I baked a batch of these Healthy Strawberry Cinnamon Rolls for my mom! They taste sweet and summery with lots of bright berry flavor, and they’re just as soft and tender as traditional cinnamon rolls… But these have no refined flour or sugar and only 95 calories! 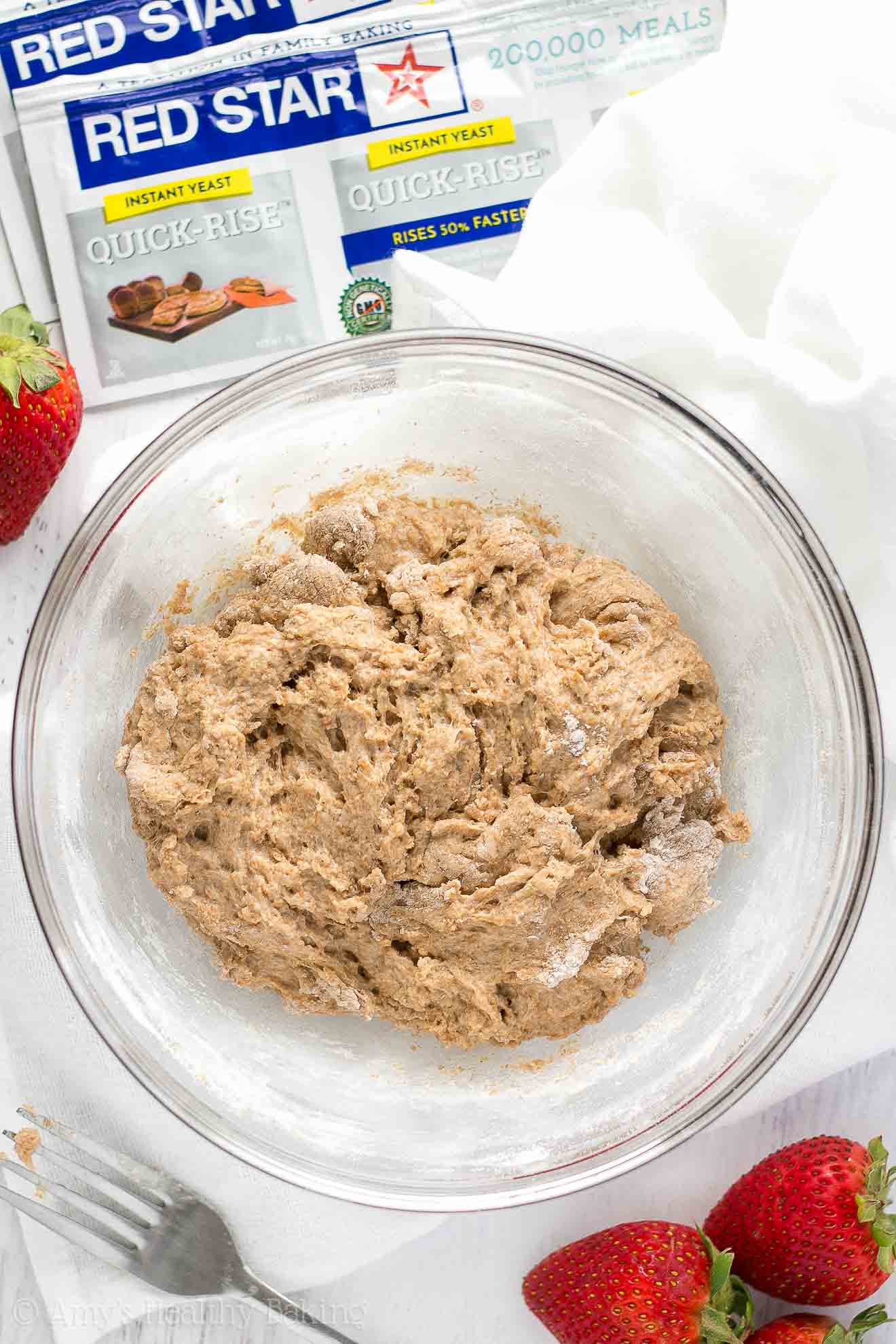 Let’s go over how to make these healthy strawberry cinnamon rolls—entirely from scratch! I know baking cinnamon rolls can sometimes feel intimidating… But I’m giving you plenty of nerdy baking tips so your batch turns out perfectly!

Nerd Alert #1: Yeast
Unlike most cakes, muffins, and quick breads that use baking powder and baking soda to make them rise, many traditional breads and cinnamon rolls use yeast. I’ve been baking with yeast since I was 8 years old, and Red Star Yeast is the best yeast I’ve ever used—by far! It always ensures my cinnamon rolls fully rise to double their original size, which is key to their light and fluffy texture.

I used Red Star Yeast’s Quick Rise yeast in these cinnamon rolls, but any of their yeast products will work. I love and have used all of them when baking bread and cinnamon rolls!

Nerd Alert #2: Milk
Any milk will work in this particular recipe! However, it’s really important that you use warm milk, around 100-110°F. This temperature activates the yeast so it turns puffy and cloudy. Hotter temperatures can kill the yeast, whereas cold milk doesn’t fully activate it.

My rule of thumb? If you dip your pinky into your warm milk and it feels like the temperature of warm bathwater or a hot tub, then you’re good to go! 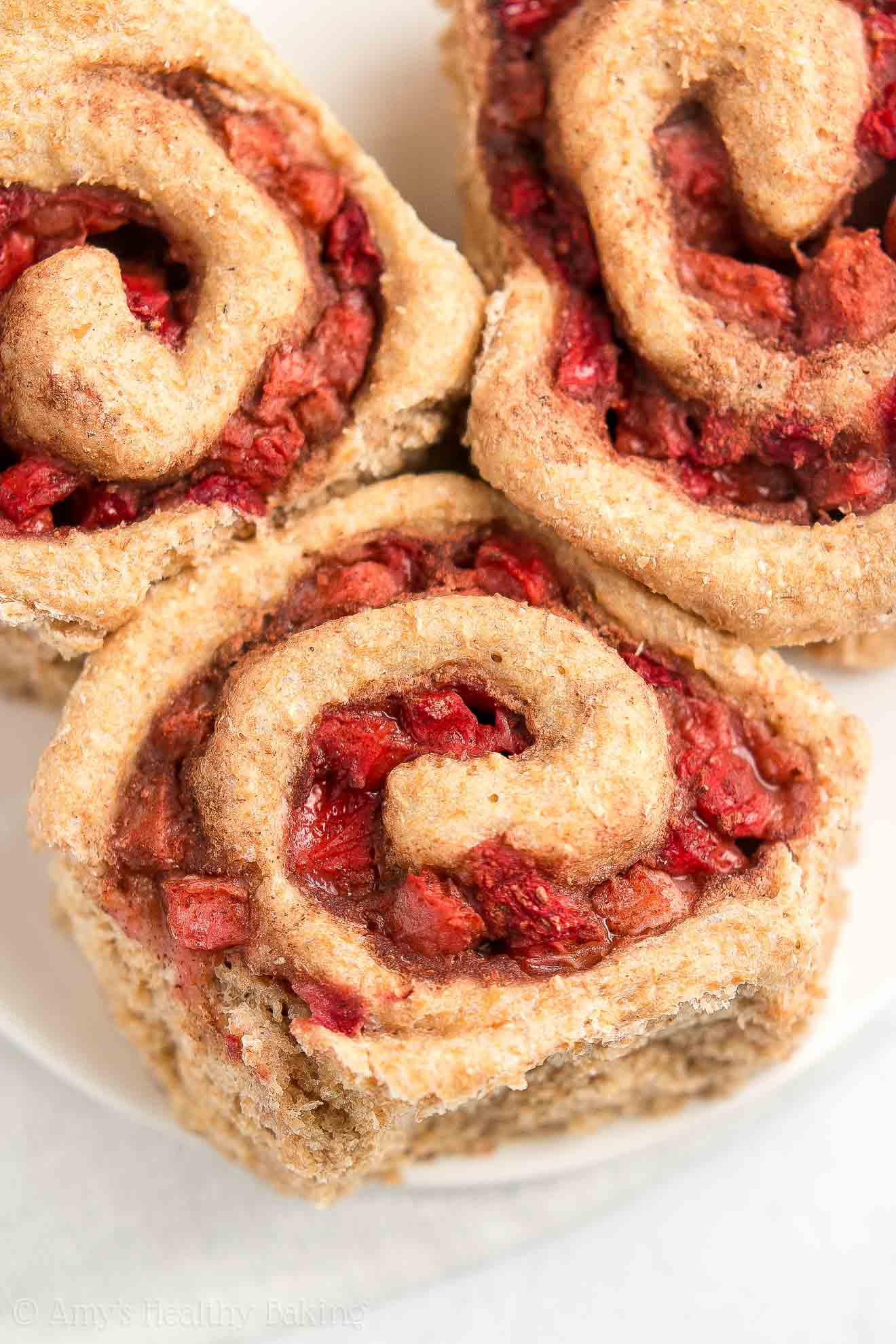 Nerd Alert #3: Sweetener and Salt
Unlike traditional recipes that call for refined granulated sugar, you’ll mix in just a bit of coconut sugar (like this!) instead. Coconut sugar is exactly what it sounds like: an unrefined sweetener that comes from coconuts. However, it doesn’t actually taste like coconuts! It has a rich caramel-like flavor similar to brown sugar.

The coconut sugar acts as “food” for the yeast, which helps the dough rise faster and have a more tender texture. The salt prevents the yeast from “eating” all of that coconut sugar (and therefore creating air bubbles as a result!) too quickly. It’s important to have a good balance of both!

Nerd Alert #4: Flour
To make these strawberry cinnamon rolls healthy, you’ll use whole wheat flour. This is my favorite flour for making cinnamon rolls! From my experience, it rises a little better than other brands, so your cinnamon rolls will always turn out tall and puffy when made with that flour and Red Star Yeast!

Once you’ve made the dough, it’s time to knead! I always knead by hand because it’s so soothing. You can watch my video here on how to do so! The dough is ready when mostly springs back when you gently press your index finger into it. 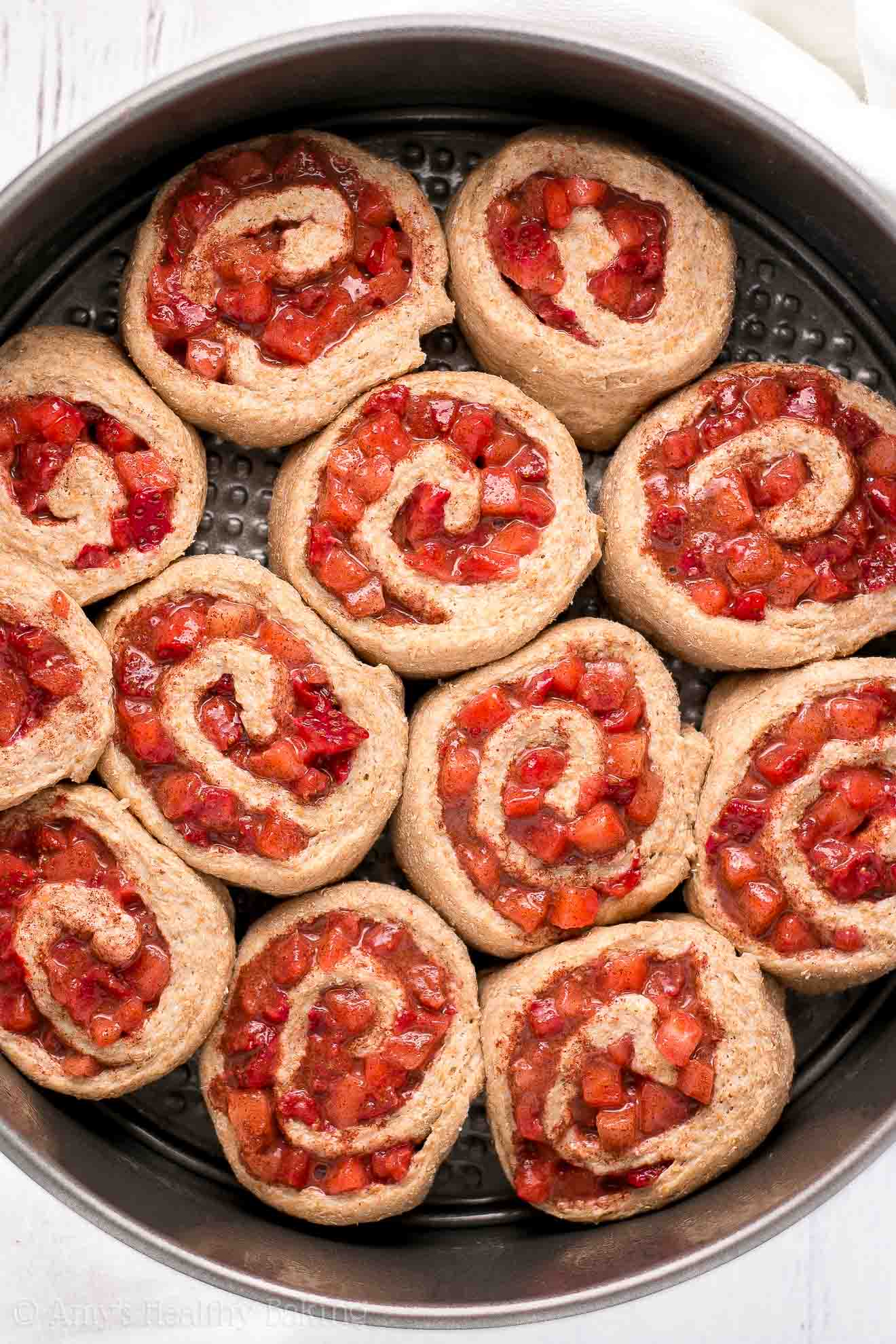 Nerd Alert #5: The Filling
While you let the dough rest for a few minutes, it’s time to prepare the filling for these healthy cinnamon rolls! It’s super simple: just toss together finely diced fresh strawberries, cinnamon (I’m obsessed with this type!), and cornstarch (like this!). The cornstarch thickens the juice that the strawberries release while baking, which means your filling stays inside of the cinnamon rolls and doesn’t leak out from the bottoms.

It’s really important to finely dice your strawberries. They should be no larger than the size of miniature chocolate chips. This small size ensures (a) that they don’t poke holes through the dough while you roll it up and (b) they fully cook through while baking. I know it takes more time to cut them so small, but I promise it’s worth it!

Once you’ve rolled out the dough (I highly recommend using a silicone baking mat like this and a silicone rolling pin like this!), spread the filling on top! Leave a ½” border on one long edge and a 1” to 1 ½” border on the other long edge. This is because the filling tends to squish towards that second long edge as you roll up the dough, so leaving extra space means it won’t fall out and will stay fully within the cinnamon rolls! 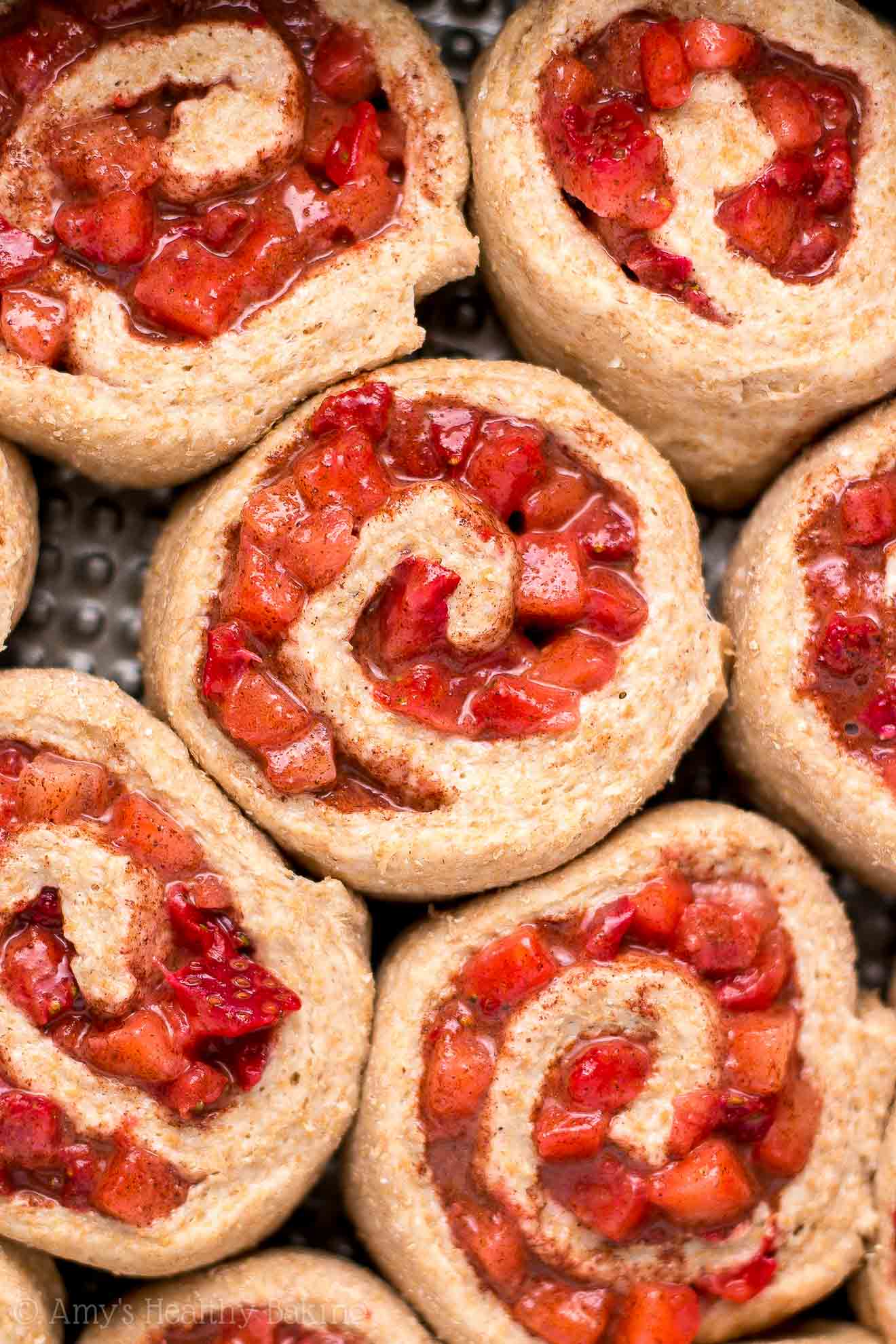 Time to let them rise! Put your pan in a warm draft-free place, cover with a towel, and set your timer for 45 minutes. At that time… 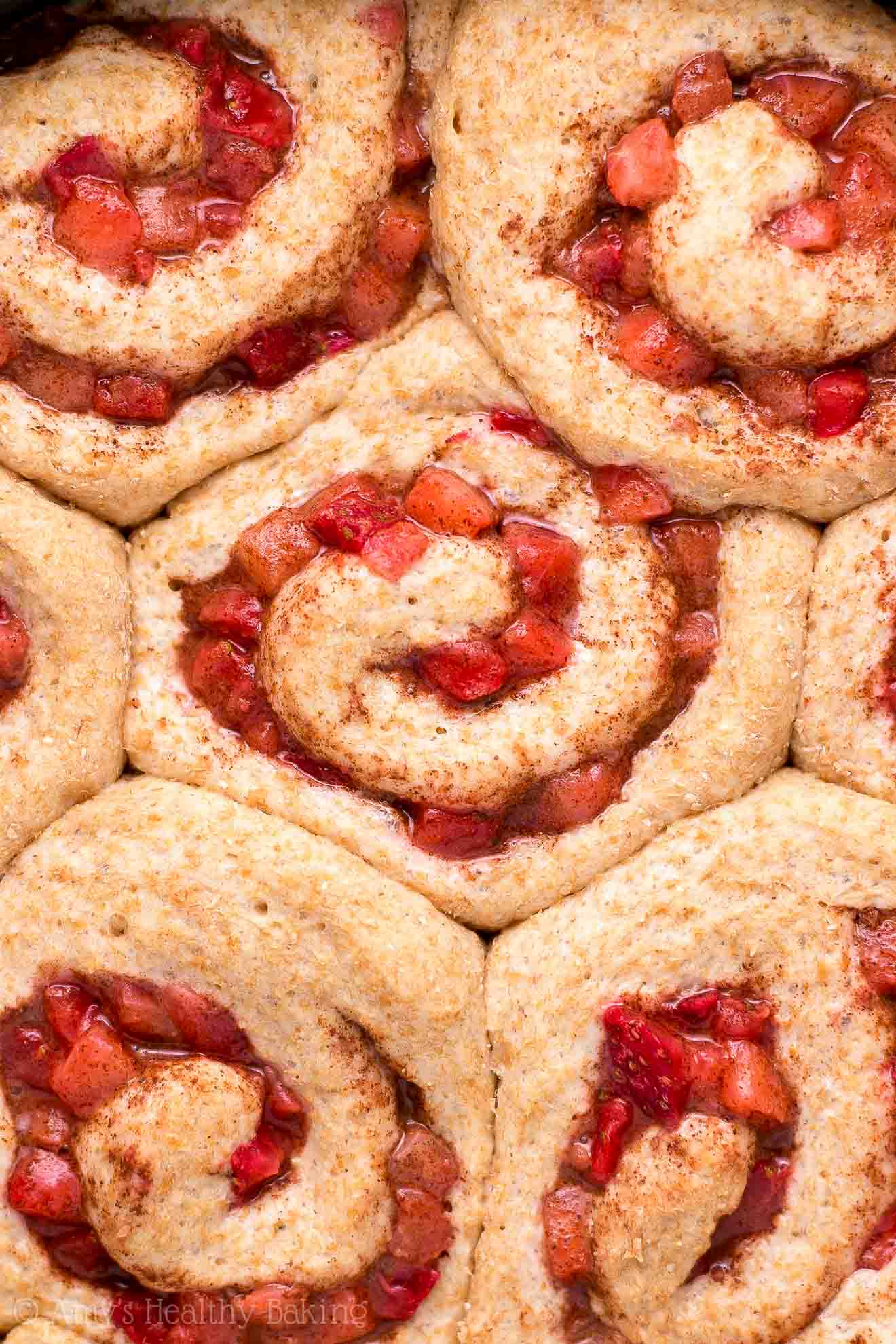 They should’ve magically doubled in size! (Thanks, Red Star Yeast!) Then all that’s left to do is bake them… 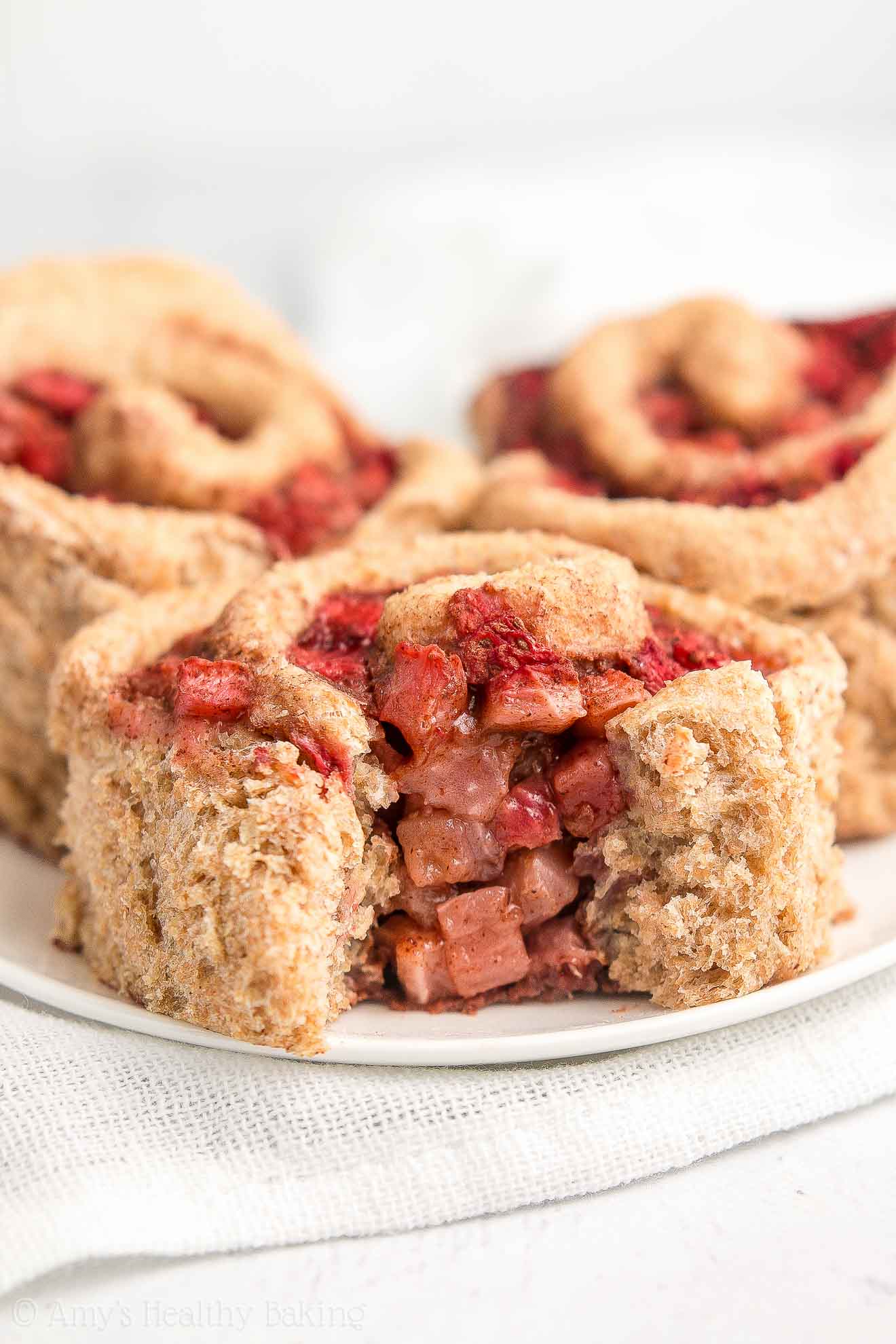 And try not to eat half the pan in one sitting! ? And when you make your own, remember to snap a picture and share it on Instagram using #amyshealthybaking and tagging @amyshealthybaking IN the photo itself! (That guarantees I’ll see your picture! ?) I’d love to see your healthy strawberry cinnamon rolls!

Click here to PIN the recipe and save it for later!
Yields: 12 cinnamon rolls
With their juicy fresh berry filling, these cinnamon rolls are perfect for spring and summer brunches! They dough is light and tender, and the fruit filling is such a fun twist on classic cinnamon rolls. Leftovers will keep for at least four days if stored in an airtight container in the refrigerator.
Notes: I highly recommend using a 9”-round springform pan, like this! Springform pans have taller sides than most traditional cake pans, so this allows your cinnamon rolls to rise properly without touching the top of the towel in Step 6.

For a vegan version, substitute your favorite non-dairy milk and stick-style vegan butter in place of the regular unsalted butter. (You may substitute coconut oil, but the cinnamon rolls will taste different, and the yeast won’t turn frothy in Step 2.)

I highly recommend using a silicone baking mat like this and a silicone rolling pin like this to roll out the dough. The dough doesn't stick as much to those!

It’s really important to finely dice your strawberries. They should be no larger than the size of miniature chocolate chips. This small size ensures (a) that they don’t poke holes through the dough while you roll it up and (b) they fully cook through while baking. I know it takes more time to cut them so small, but I promise it’s worth it!

If your strawberries aren’t overly ripe and sweet, then add 1-2 tablespoons (12-24g) of coconut sugar to the filling.

To see how to make cinnamon rolls, watch my video here located directly above the recipe. (It’s for a very similar recipe!)

This post was sponsored by Red Star Yeast. As always, all text, photos, recipes, and opinions are my own.

The Healthier Chocolate Treats cookbook is perfect for any and all chocolate lovers. Whether you enjoy chocolate occasionally or every single day (that’d be me!), there are plenty of goodies inside for you! Healthier Chocolate Treats contains 50+ brand new healthier recipes. These recipes have never been seen before or appeared on my blog. You won’t find them anywhere else! And yes—every single one contains some form of chocolate. Whether you prefer milk, dark or white, there are lots of treats inside for you!     What Inspired You to Write Healthier Chocolate Treats? I have always loved chocolate. Every Halloween throughout my childhood, I inverted the entire contents of my bright orange jack-o-lantern bucket … END_OF_DOCUMENT_TOKEN_TO_BE_REPLACED