Learn how to make this cinnamon apple pound cake completely from scratch! It’s supremely moist & so simple to make. No mixer required! Just 133 calories too!
Click here to PIN the recipe and save it for later! 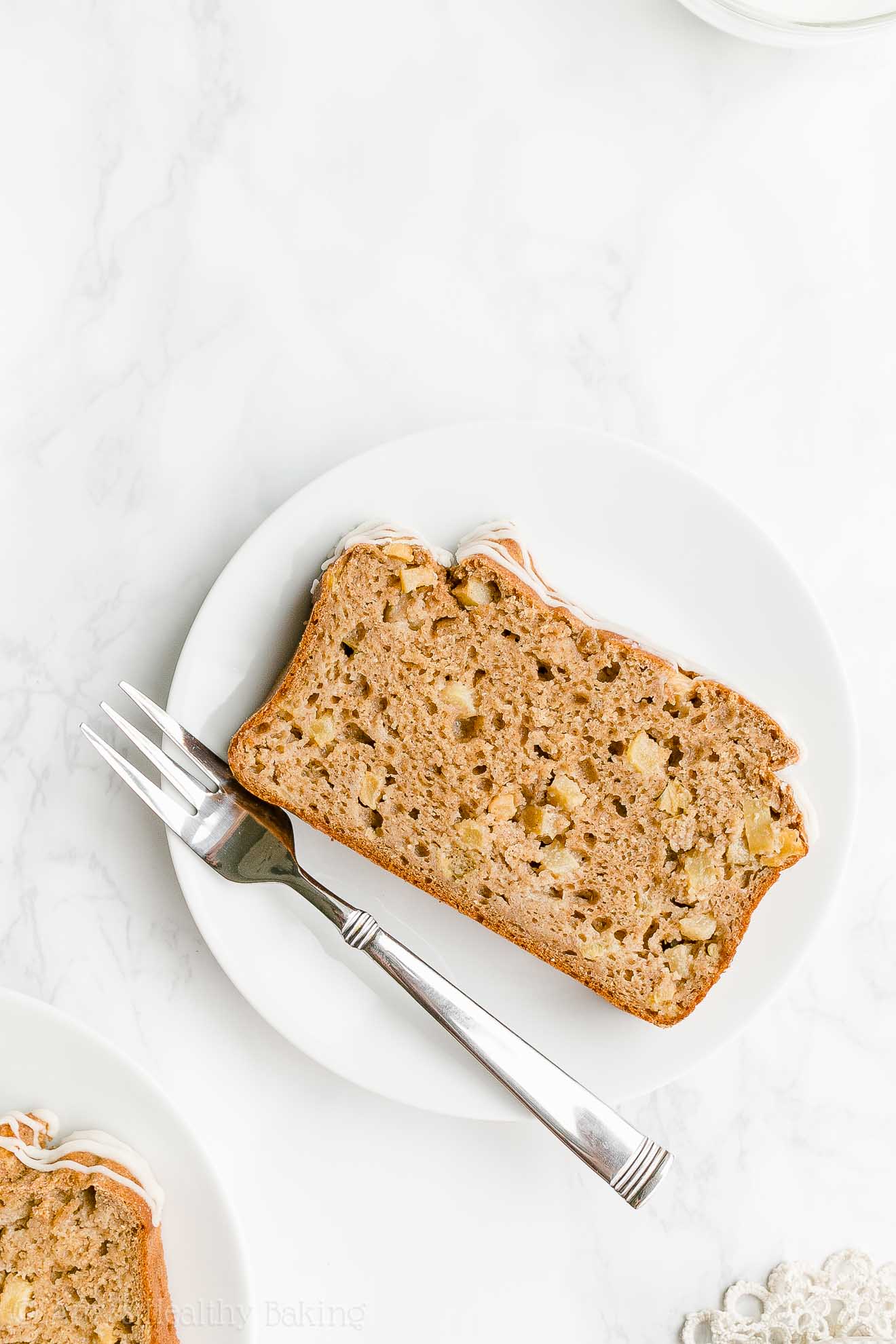 Last week, my mom and I started talking about our holiday plans for this year. While we scheduled flights for Christmas relatively easily, Thanksgiving proved to be one step harder, partially because my brother receives less time off from graduate school for Thanksgiving compared to Christmas and has fewer days to travel than the rest of us.

After thinking through various possibilities surrounding a Southern California Thanksgiving, Mom finally drew a conclusion. “I don’t really care what we end up doing as long as I can go to Disneyland at least one day at the beginning of that week!”

I cracked up and immediately responded that her idea worked just fine by me… As long as I could tag along too! 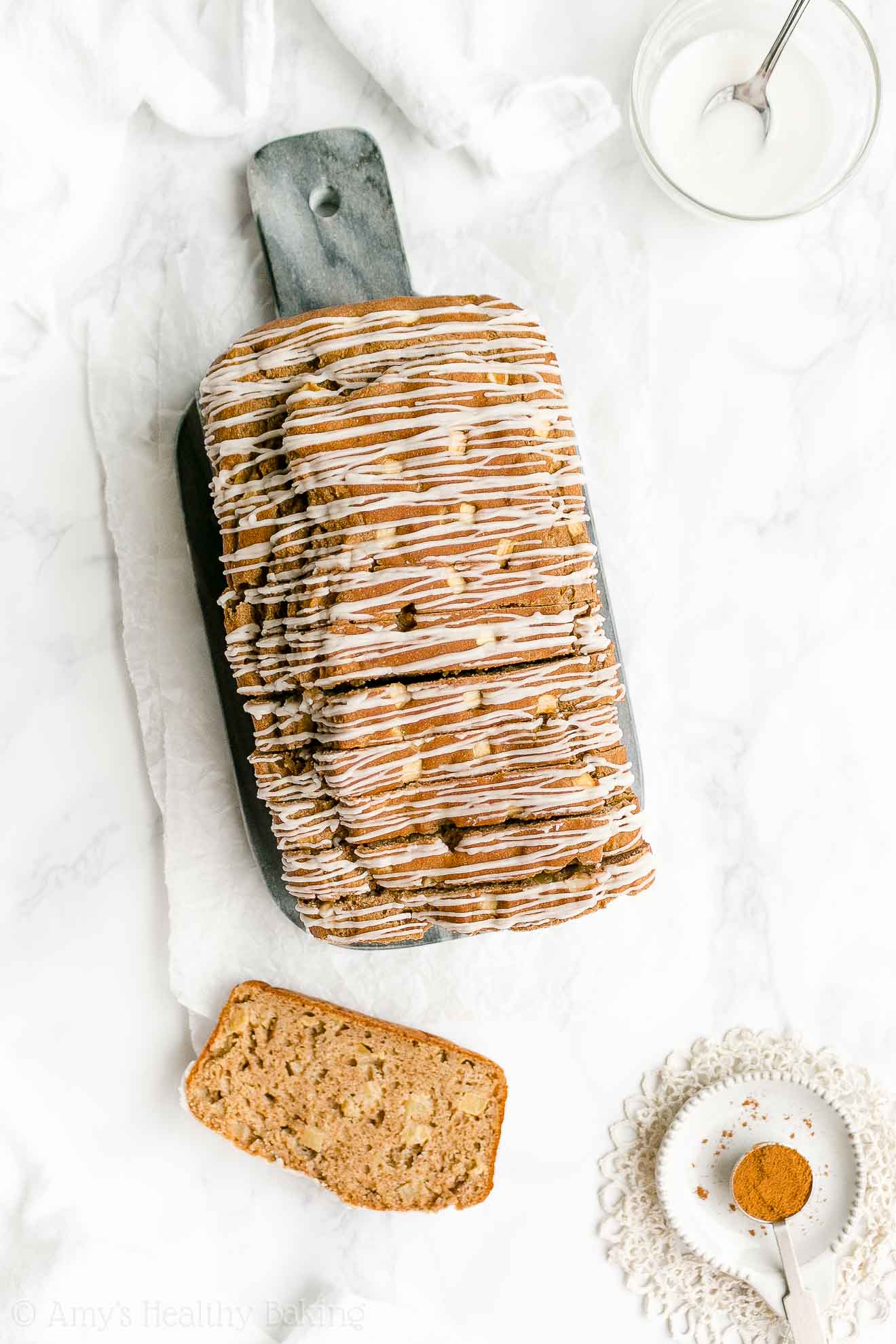 Once we hung up, I started thinking about all of my favorite rides at Disneyland. Since I went at least once every year with my school’s band from 7th through 12th grade, I actually knew the theme park’s layout and streets better than my hometown!

Thunder Mountain, Space Mountain, Splash Mountain… The Matterhorn, Indiana Jones, Pirates of the Caribbean… Even Peter Pan, Star Tours, and the Teacups… (Come to think of it, I love just about every single ride there—although some of them have probably changed names since my childhood!) 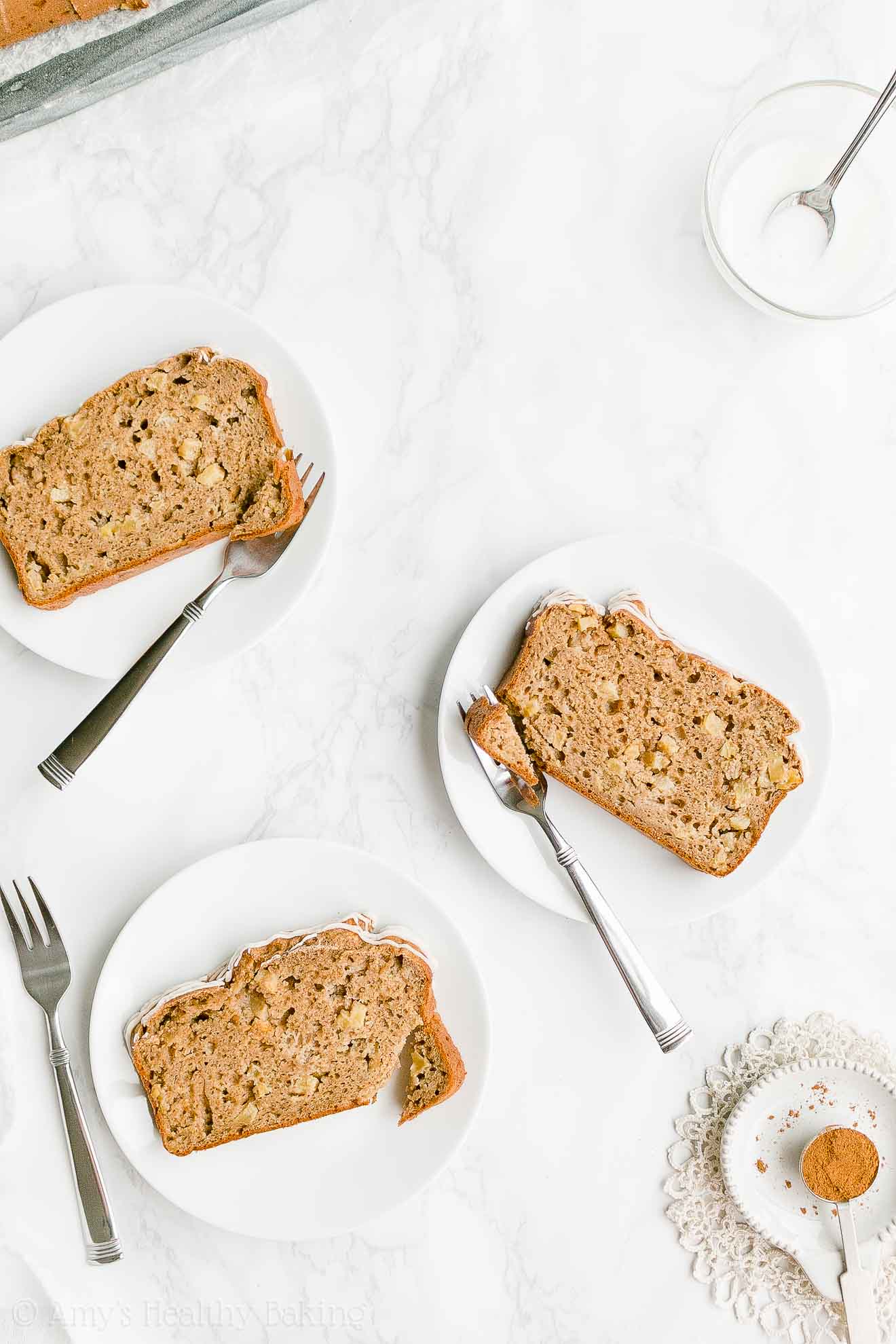 Of course, I didn’t stop with the rides… I started thinking about my favorite foods to eat at Disneyland too! (Are you surprised? ?) Cheese pizza from Pizza Port in Tomorrowland, chicken skewers from Bengal Barbecue in Adventureland, chowder from New Orleans Square, churros from just about any cart, caramel apples from the Candy Palace on Main Street…

Later that evening, I ended up craving something sweet made with apples as a result of thinking about those caramel apples for far too long. Even though I adore every single flavor from Disneyland, whether covered in chocolate chips or nuts or mini M&Ms, I realized my taste buds wanted something besides caramel and chocolate to pair with the apples… 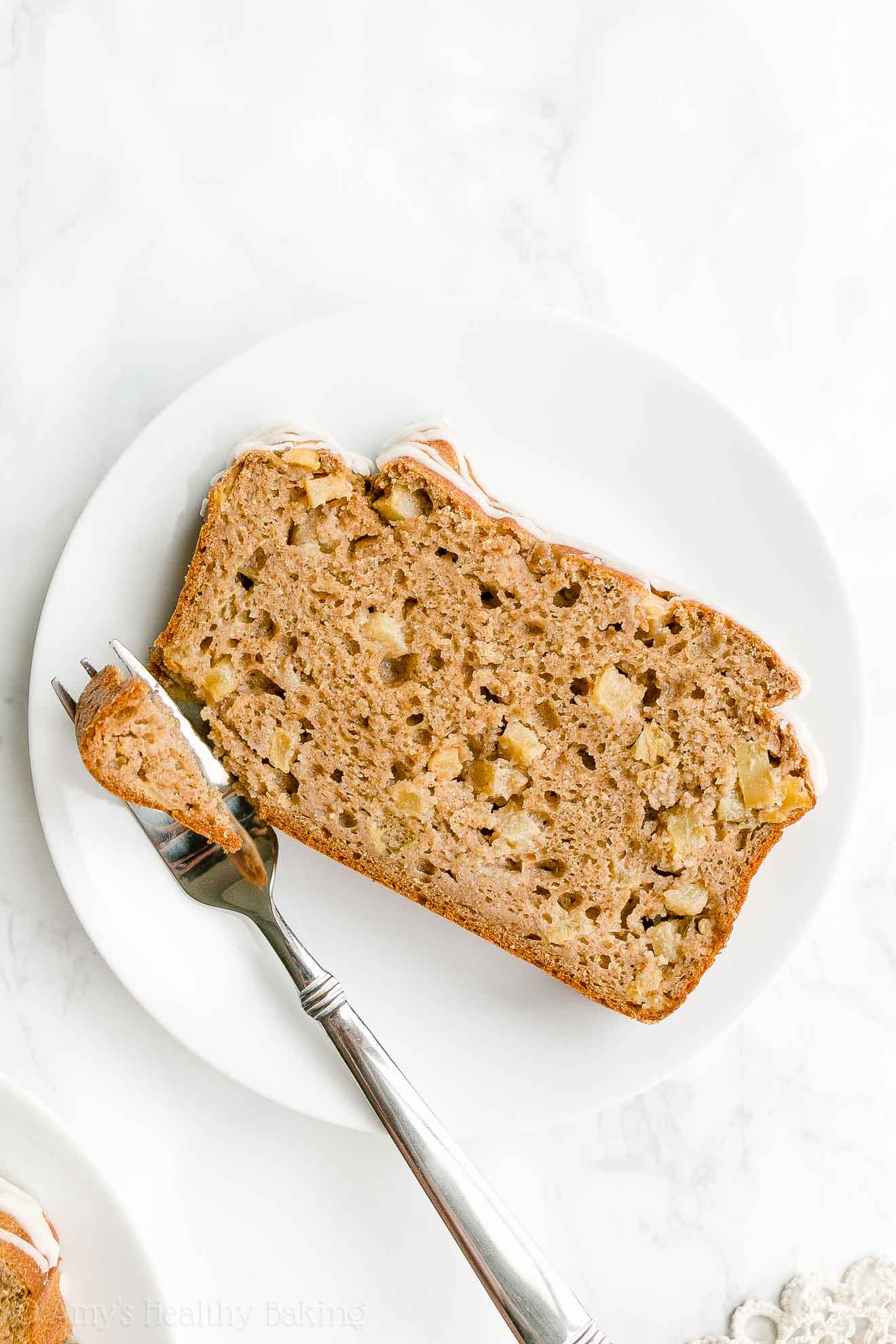 They craved spices instead! So the next day, I baked this Healthy Cinnamon Apple Pound Cake to satisfy my sweet tooth. It’s supremely moist and tender, thanks to lots of Greek yogurt, and its warm cozy flavor from the spices pairs perfectly with the sweet apples.

Yet unlike those Disneyland caramel apples, this cinnamon apple pound cake is completely healthy and made with no refined or artificial ingredients… And it’s only 133 calories! 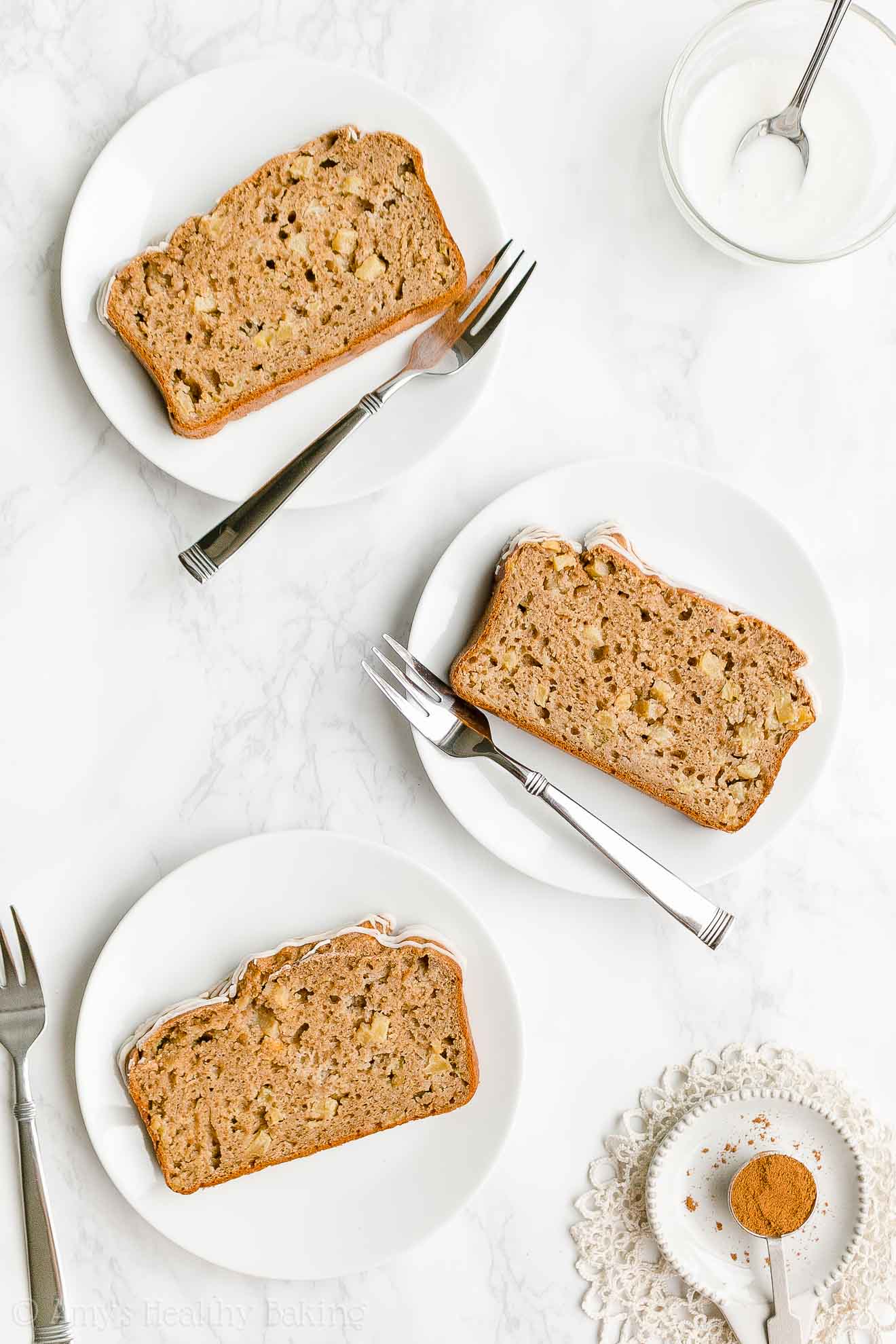 Let’s go over how to make this healthy cinnamon apple pound cake!

First, a {very, very brief} history lesson… Pound cakes originally earned their name because they contained a pound of four main ingredients: all-purpose flour, granulated sugar, butter, and eggs. Does anyone else think that sounds like a crazy amount of calories? Hopefully not just me…

So we’re definitely making our pound cake much healthier—starting with the flour! You’ll use white whole wheat flour (like this!). I know, I know… The name sounds confusing at first. But I promise it’s not a combination of white (aka all-purpose) flour and whole wheat flour!

Tip: I’ve also included my favorite gluten-free option in the Notes section of the recipe, if you prefer! 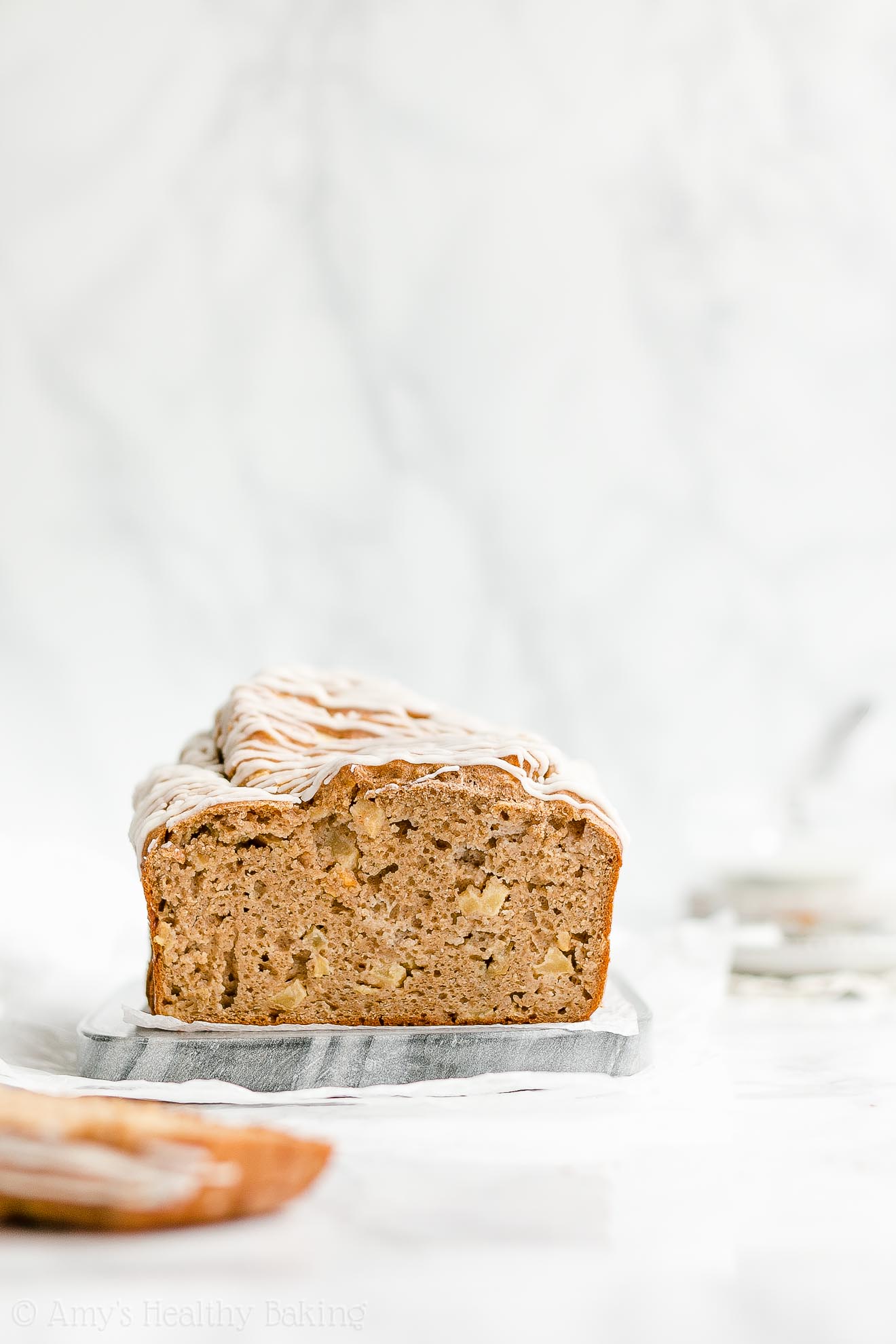 Next, you’ll whisk the spices into the white whole wheat flour. You’ll use cinnamon (I’m obsessed with this type and rarely bake with anything else!), allspice (like this!), and nutmeg (this). Yes… The recipe title only says “cinnamon.” But I’ve found that adding a small amount of sweet allspice and cozy nutmeg really rounds out the warm, comforting spice flavor from cinnamon!

Next, let’s tackle the butter and eggs. Instead of a pound of butter (about 2 cups) and a pound of eggs (around 9 of them!), you’ll just use 1 tablespoon of butter and 3 egg whites. Whew! That really helps keep this healthy cinnamon apple pound cake low in calories (and fat!). 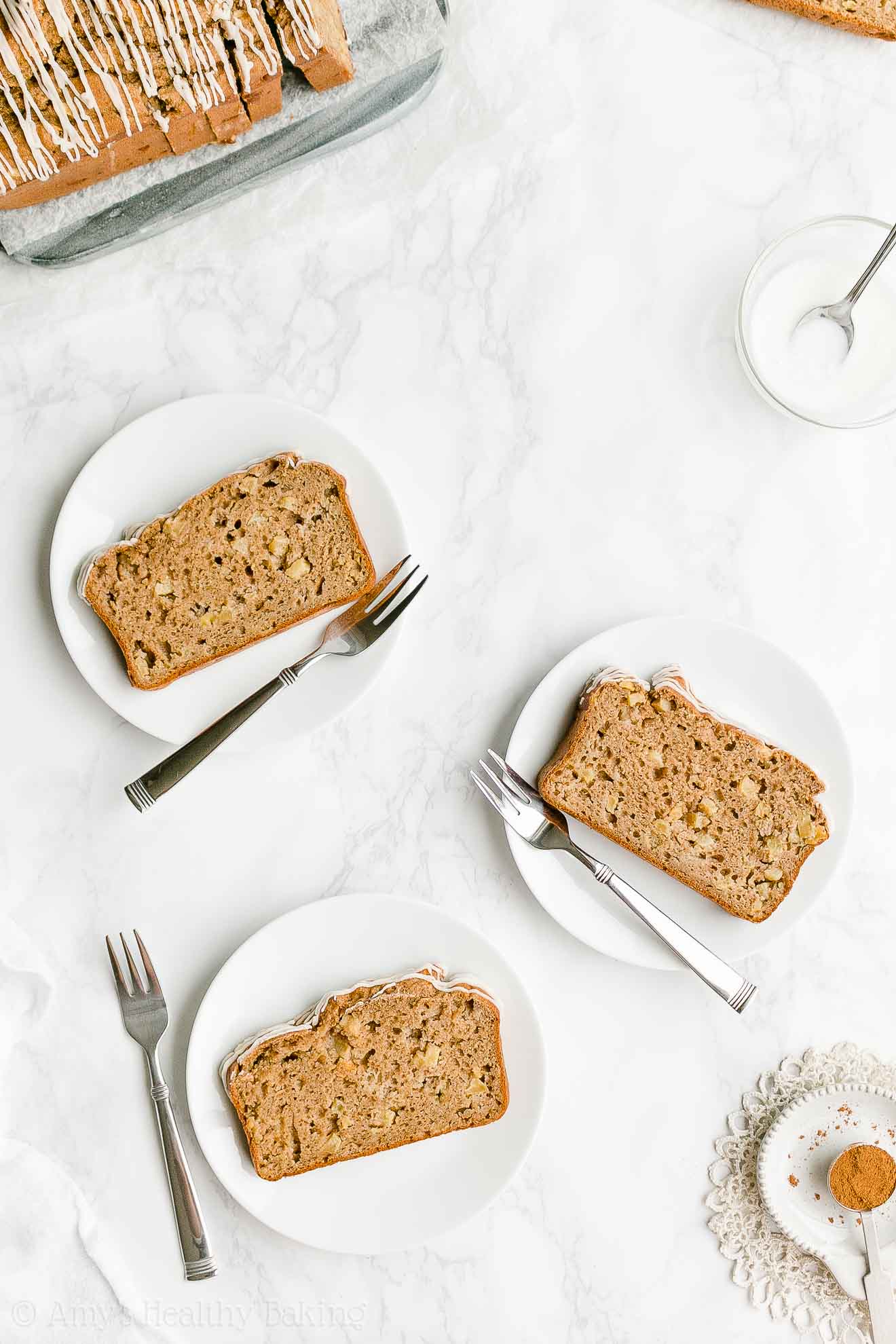 Then you’ll stir in lots of Greek yogurt to keep your pound cake supremely moist and tender! Greek yogurt adds the same moisture to your cake batter as extra butter or oil but for a fraction of the calories, and it gives your healthy cinnamon apple pound cake a protein boost, too. There’s a reason it’s one of my favorite ingredients in my healthy baking recipes!

Now onto the sweetener! Instead of a pound of refined granulated sugar (a little less than 2 ½ cups!), you’ll use liquid stevia to sweeten your healthy cinnamon apple pound cake. Stevia is a plant-based, no-calorie sweetener that contains nothing refined or artificial (aka it’s clean eating friendly!). It’s also highly concentrated. You just need 4 ½ teaspoons of this liquid stevia to sweeten your entire pound cake!

Although you can find it at many health-oriented grocery stores, I prefer to buy mine online here because that’s the cheapest price I’ve found. (And you’ll use it in all of these recipes of mine, too!) 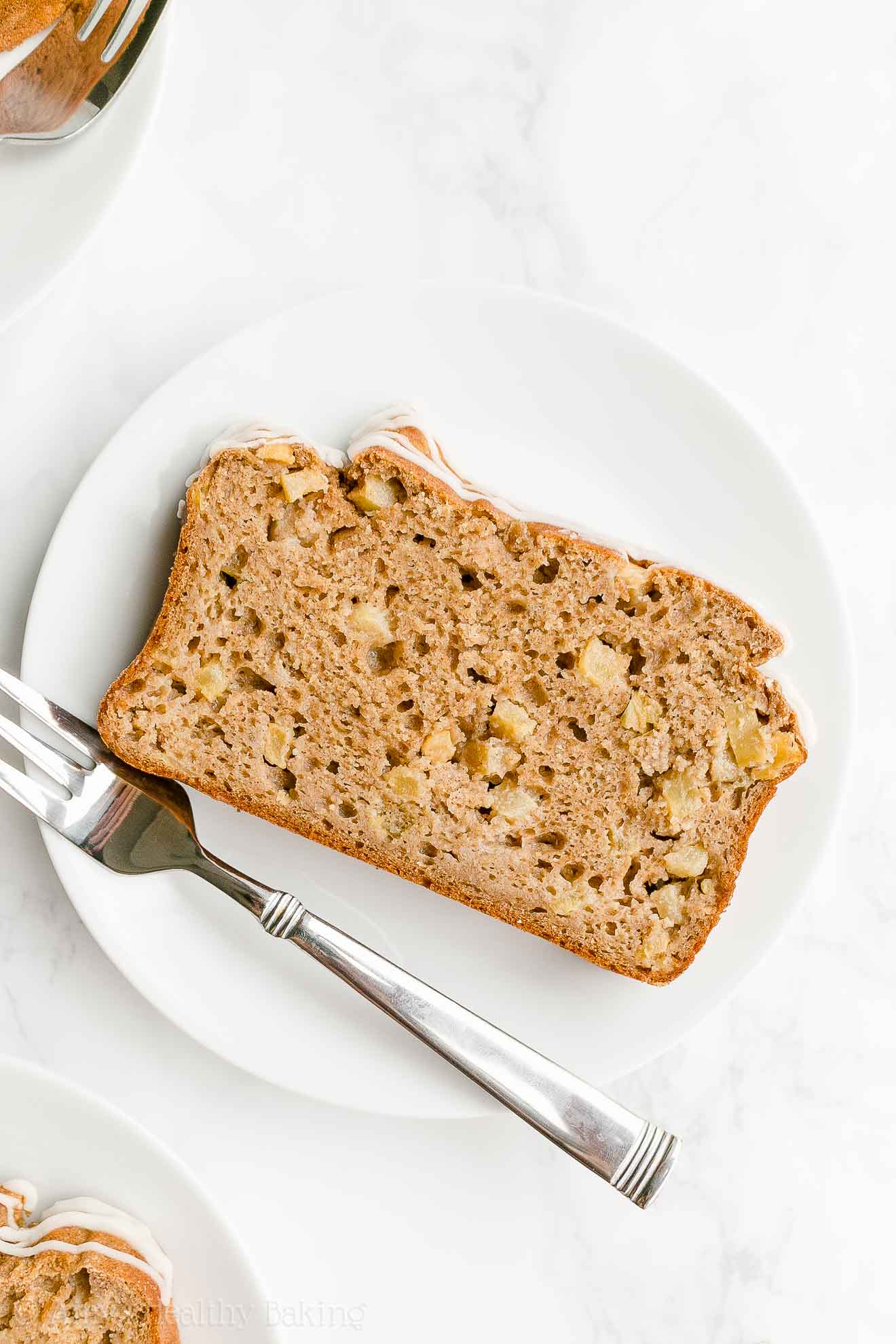 Time for the apples! I use Fuji apples because I love their naturally sweet flavor, and they also have a great texture for baking. Remember to cut them to be about the same size as chocolate chips so your pound cake bakes evenly!

One last thing! If you’d like to add a little drizzle on top (totally optional!), then it’s super simple to make. Just stir together a little confectioners’ style erythritol (I use this one!) and milk in a small bowl. Transfer that to a zip-topped bag, cut off a tiny piece of one corner, and drizzle all over your healthy cinnamon apple pound cake! 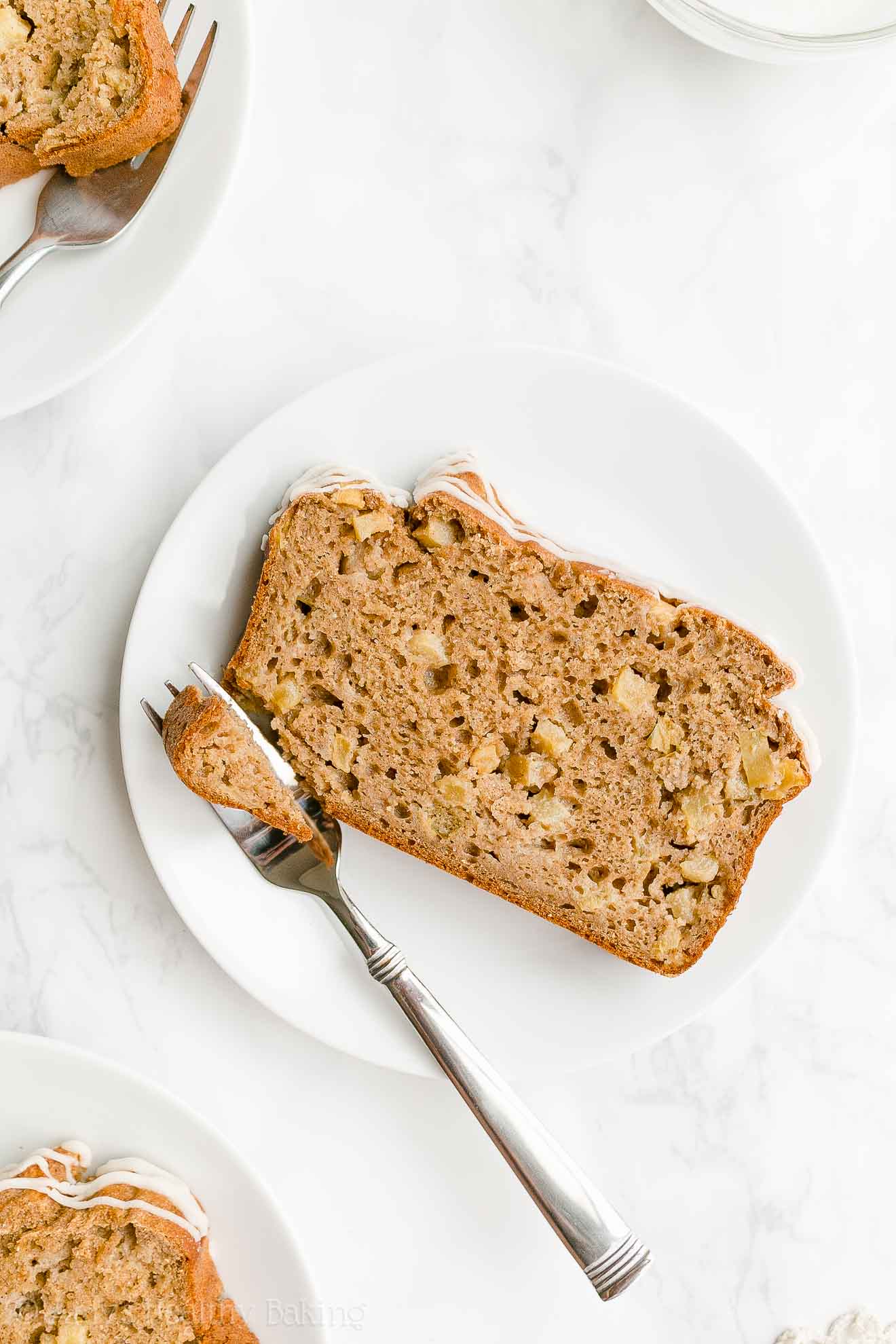 Ready to eat a slice? I certainly am! And when you make your own, remember to snap a picture and share it on Instagram using #amyshealthybaking and tagging @amyshealthybaking IN the photo itself! (That guarantees I’ll see your picture! ?) I’d love to see your healthy cinnamon apple pound cake!

Click here to PIN the recipe and save it for later!
Yields: 1 pound cake, 12 slices
This is one of my favorite fall desserts! The cake is supremely moist and tender, thanks to Greek yogurt, and the cozy spices pair so well with the sweet apple. Leftovers will keep for at least on week if stored in the refrigerator in an airtight container or tightly wrapped in plastic wrap.
Notes: For the gluten-free flour, use the following: 1 ½ cups (180g) millet flour, ¾ cup (90g) tapioca flour, ½ cup (60g) brown rice flour, and 2 teaspoons xanthan gum. Most store-bought gluten-free flour blends (like this one!) will work as well, if measured like this.

Remember to measure the flour correctly, using this method or a kitchen scale. (← That’s the one I own and love!) Too much flour will make your cake dry, instead of moist and tender.

The cake requires 3 full egg whites. The whites contain the majority of the protein in eggs, and that protein is required to ensure the cake maintains its shape and texture while cooling. Without all 3 egg whites, the cake will collapse while cooling and turn out much denser.

I do not recommend substituting for the liquid stevia, if at all possible. (It’s one of my favorite ingredients, and you’ll use it in all of these recipes of mine, too!) This is the exact liquid stevia that I use, and I buy it online here because that’s the cheapest price I’ve found! For a sweeter pound cake, increase the liquid stevia by an additional ½ to 1 teaspoon.

I prefer Fuji apples because they have a naturally sweet flavor and a great texture for baking. To ensure they properly soften and your pound cake bakes evenly, cut them to be no larger than the size of chocolate chips.

Do not use an electric mixer to mix up the batter. This will result in a dense or tough cake. Use a whisk where instructed, and use a fork for everything else.

The Healthier Chocolate Treats cookbook is perfect for any and all chocolate lovers. Whether you enjoy chocolate occasionally or every single day (that’d be me!), there are plenty of goodies inside for you! Healthier Chocolate Treats contains 50+ brand new healthier recipes. These recipes have never been seen before or appeared on my blog. You won’t find them anywhere else! And yes—every single one contains some form of chocolate. Whether you prefer milk, dark or white, there are lots of treats inside for you!     What Inspired You to Write Healthier Chocolate Treats? I have always loved chocolate. Every Halloween throughout my childhood, I inverted the entire contents of my bright … END_OF_DOCUMENT_TOKEN_TO_BE_REPLACED