Learn how to make the best ever healthy blueberry waffles from scratch! Only 108 calories! Plus I’m sharing a secret trick that keeps them light and fluffy on the inside yet crispy on the outside!
Click here to PIN the recipe and save it for later! 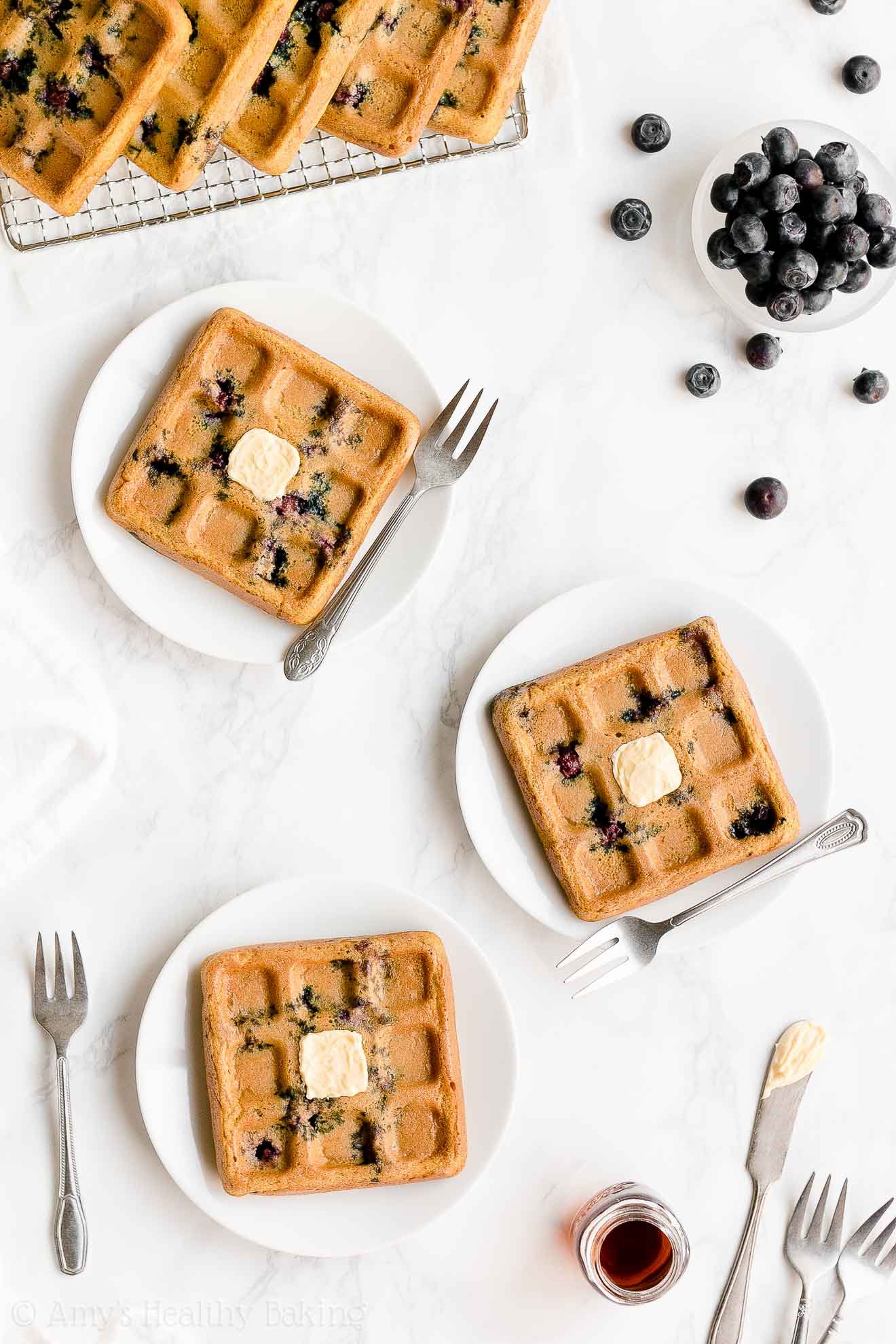 On the final day of my visit to Northern California to see my parents for the holidays, we drove to our favorite brunch spot just under an hour away from their house. Even though we arrived mid-morning, the host still immediately seated us at a table, and as he handed us menus, my mom glanced to her left.

“Oh my gosh!” she exclaimed. “I think that’s someone I work with!”

She approached a woman with her back facing us at the table next to ours, and when the woman looked up, they both laughed and exchanged hugs. After introductions all around between our two families, we learned that the woman’s father-in-law always tried to visit the restaurant at least once—if not two or three times!—every time he flew out from Chicago for the same reason that my family dines there as often as possible… 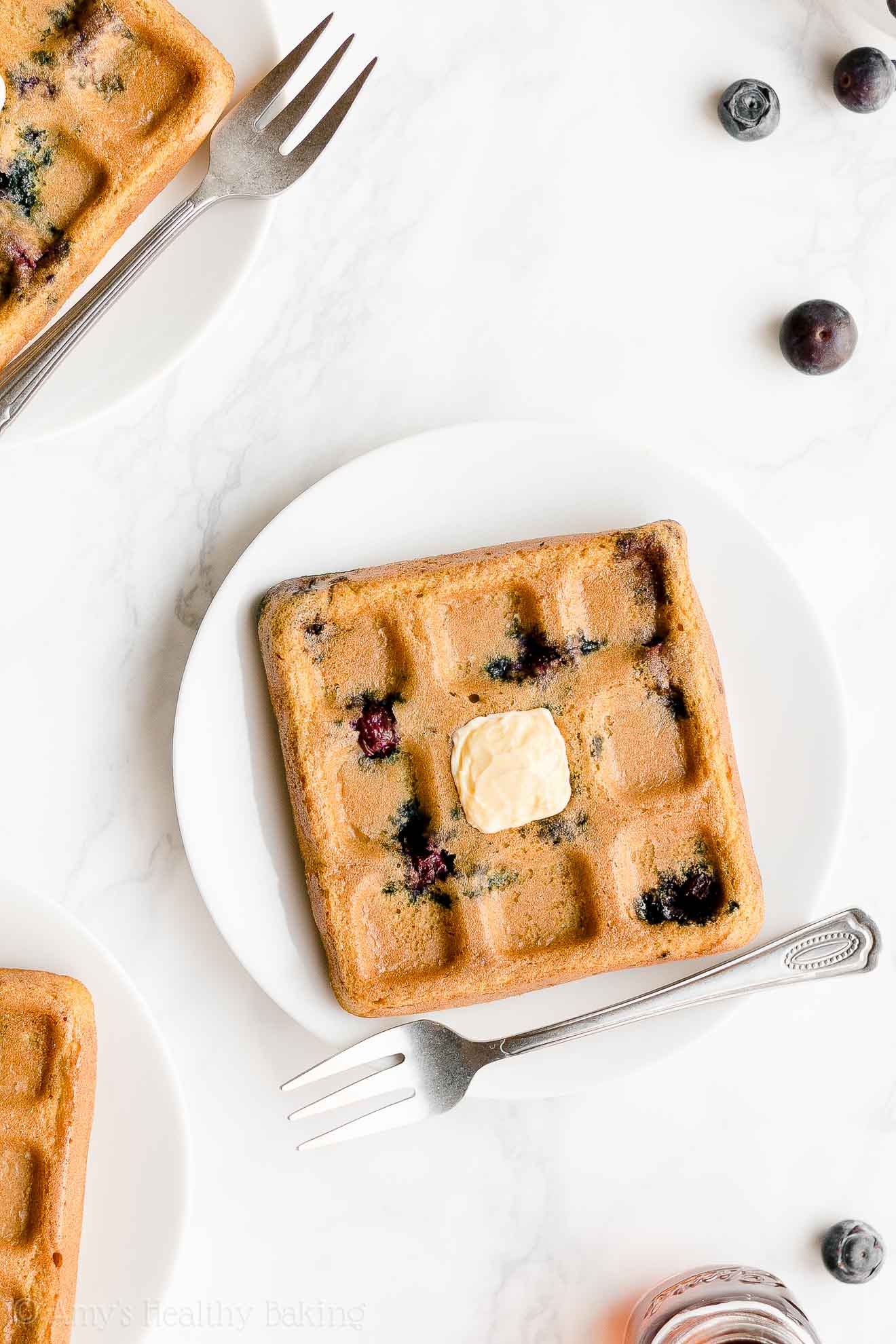 Shortly before the other family finished their breakfast, Mom called over our favorite waiter. She whispered to him to put a crowd-sized sheet pan of that irresistible blueberry coffee cake on our bill but give it to the other family so they could take it home. (We’ve often bought a pan for ourselves for Christmas morning in previous years when my mom’s parents flew out to visit us for the holidays!) 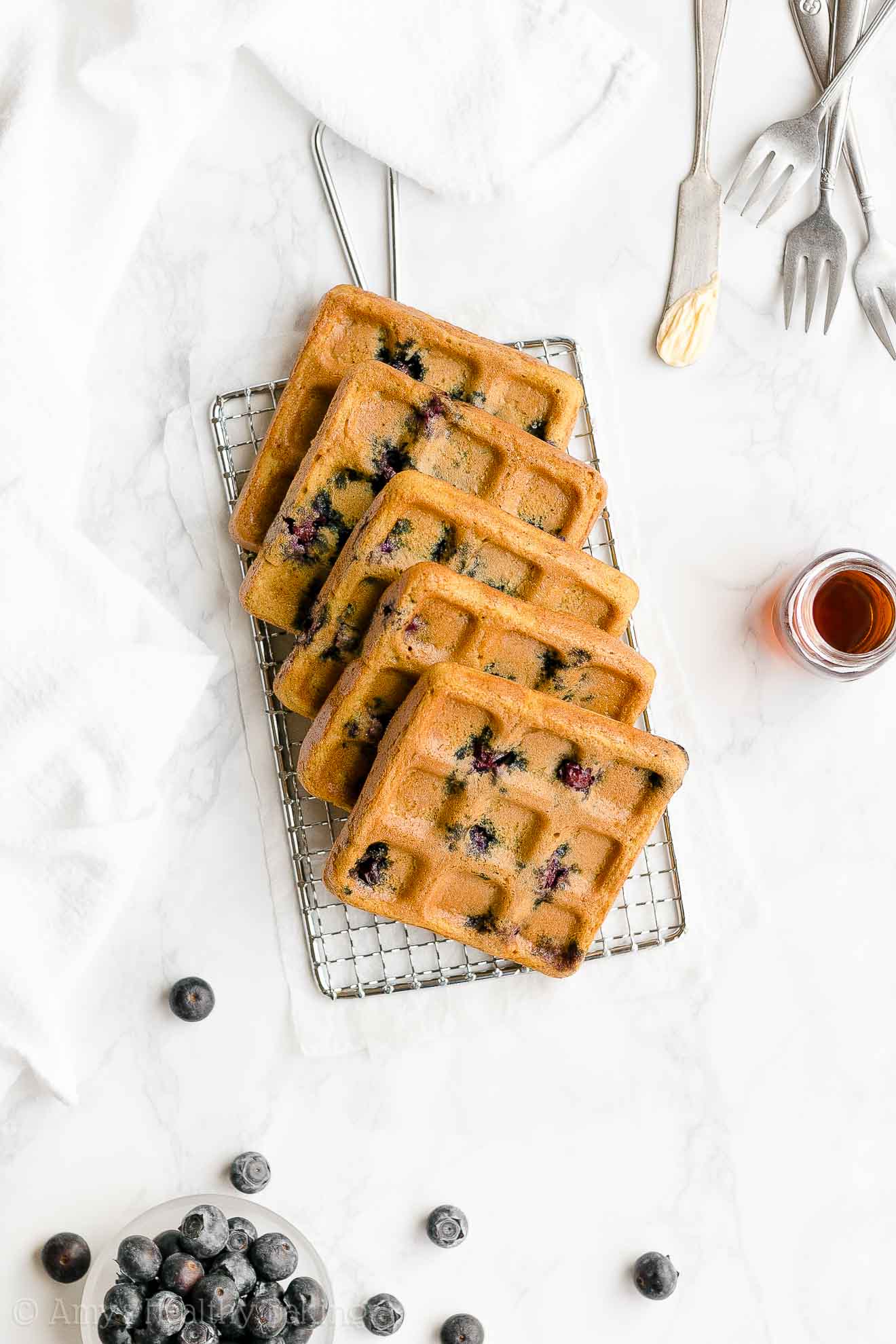 As soon as our favorite waiter handed them the gift tin, everyone’s eyes at their table widened in true shock. “Happy holidays!” he smiled, which prompted the woman to whirl around.

My mom sheepishly nodded, and their entire family thanked us profusely. It’s always fun to spread sweet surprises during the holidays! 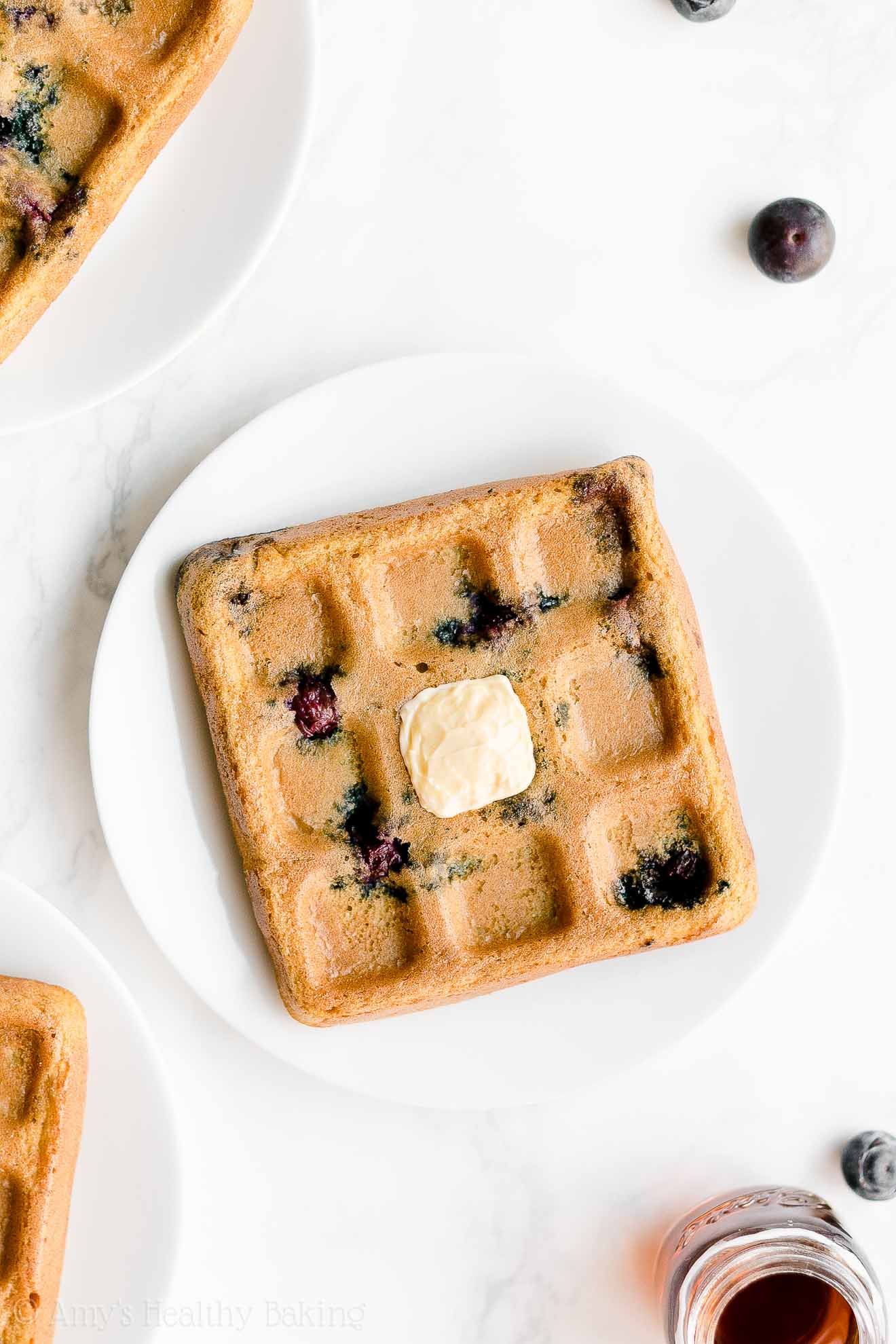 Even though I brought my own individual slice of coffee cake on the plane with me to enjoy back at my own house, I still didn’t get my full blueberry fix… So I decided to add them to one of my favorite homemade breakfasts, which resulted in these Healthy Blueberry Waffles!

These healthy blueberry waffles are light and fluffy on the inside, crispy on the outside, and full of sweet juicy berries, just like the coffee cake! But unlike that restaurant’s breakfast treat, these contain no refined flour or sugar and just 108 calories! 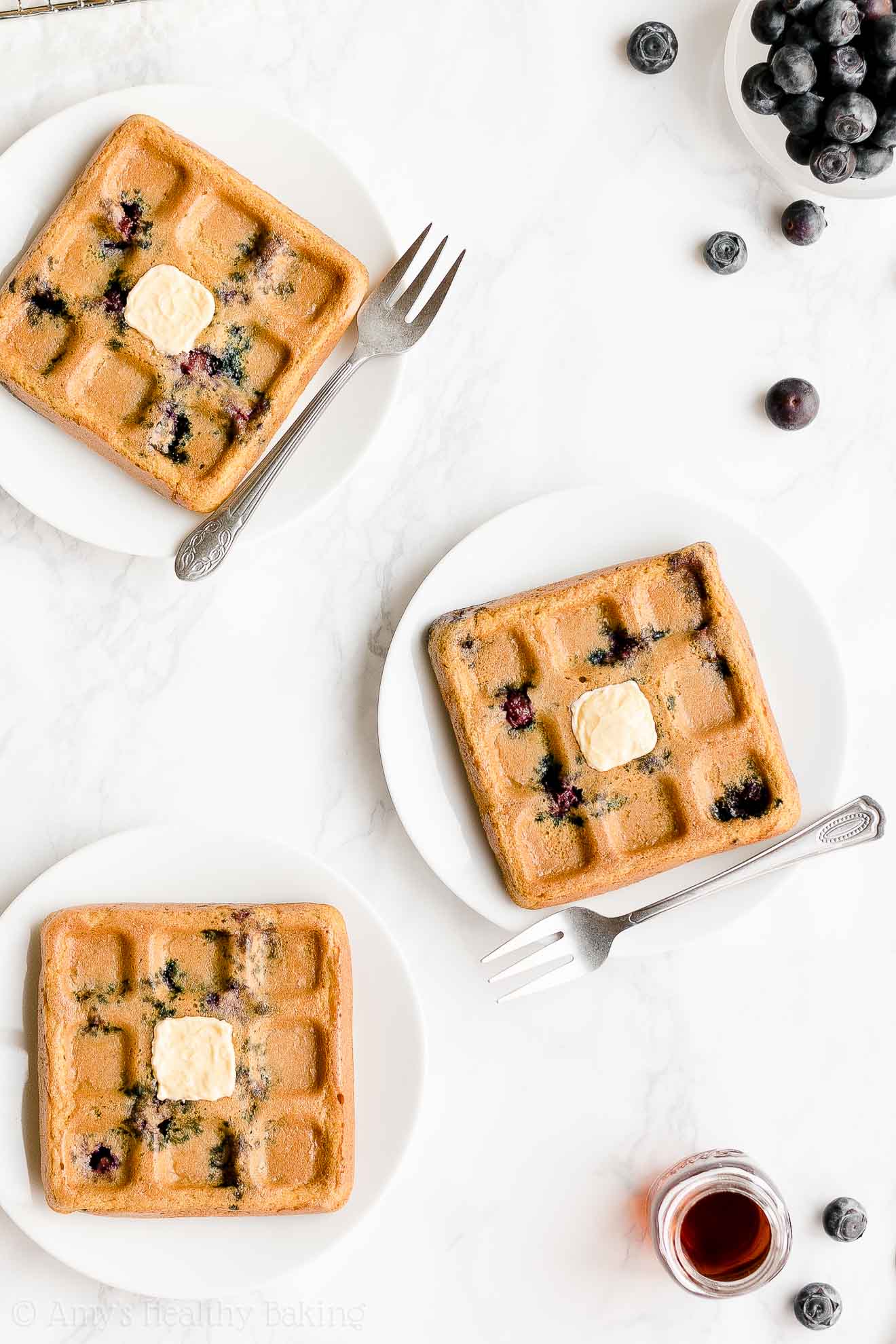 Let’s go over how to make these healthy blueberry waffles!

You’ll start with white whole wheat flour. Yes, I know that sounds a bit strange… But I promise such a thing exists, and it’s not just a combination of white (aka all-purpose) flour and whole wheat flour! 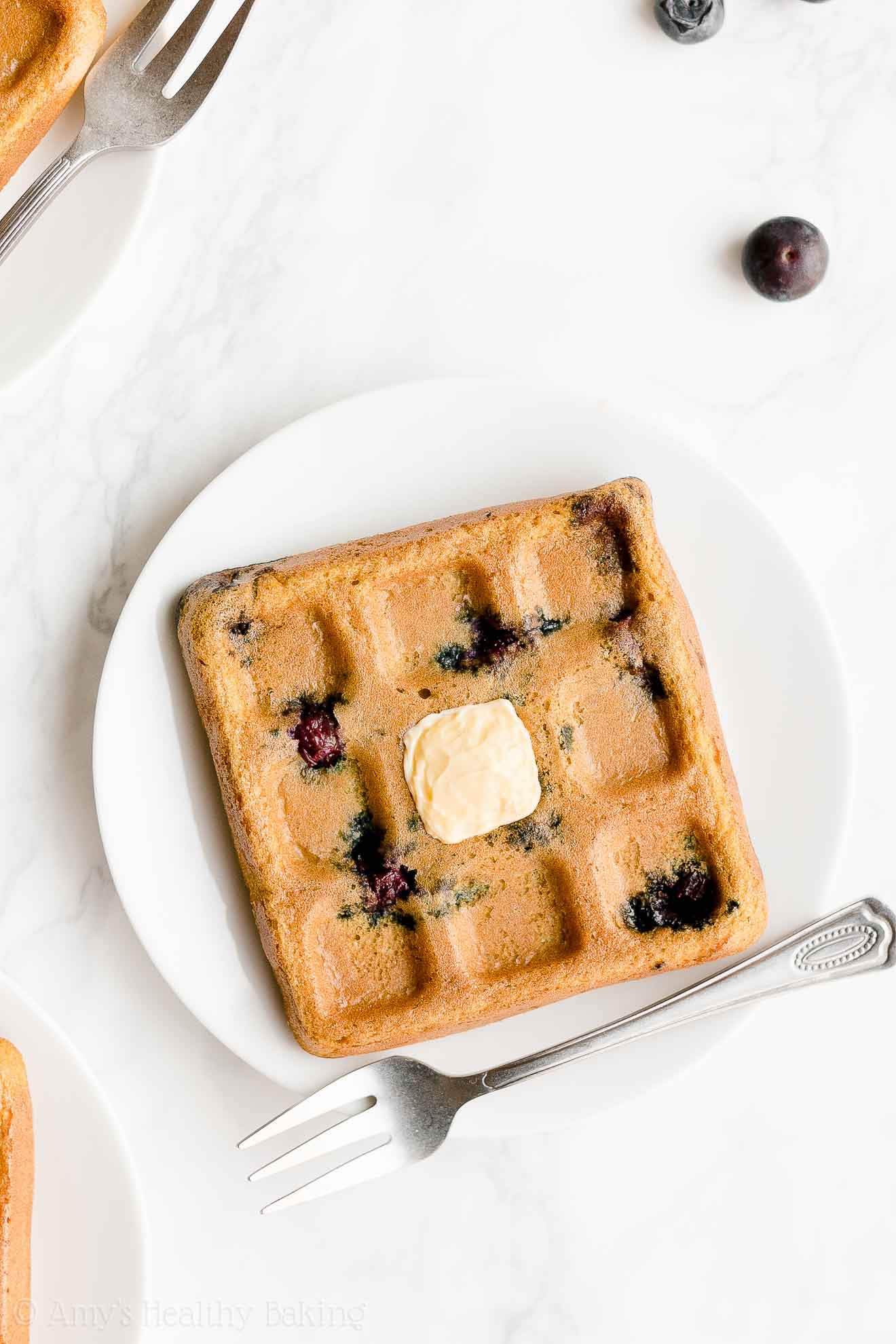 Unlike many traditional waffle recipes that require ¼ to ½ cup of butter (yikes!) for their moist texture on the inside and crispy texture on the outside, you only need 2 teaspoons in this recipe. That really helps keep your healthy blueberry waffles low fat and low calorie!

Then the rest of their fluffy and tender texture on the inside comes from one of my favorite ingredients. If you’ve browsed through my recipes before, then you probably know what it is… 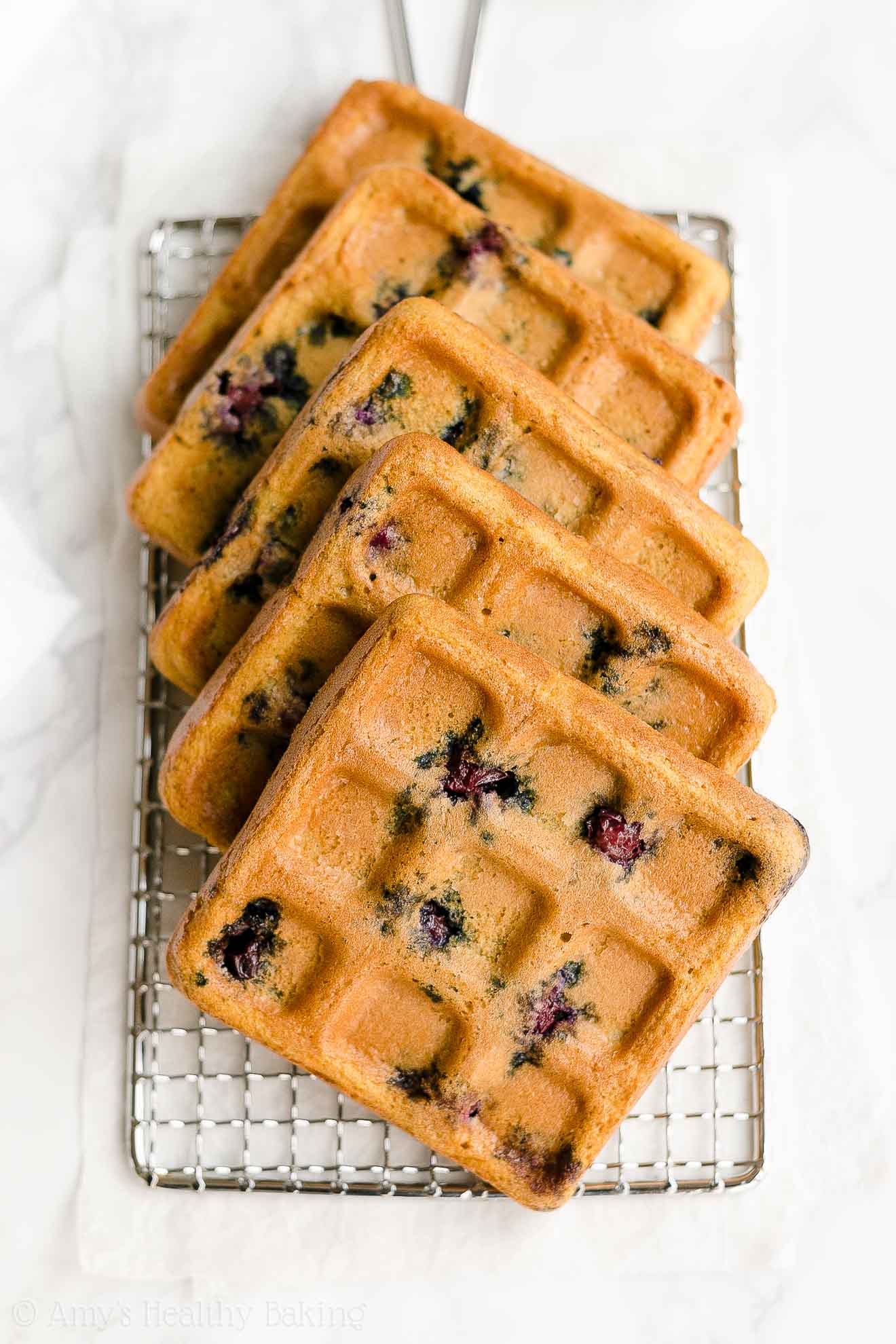 Greek yogurt! Greek yogurt adds the same moisture to your waffle batter as extra butter or oil but for a fraction of the calories, and it also adds a protein boost. I call that a win-win!

Also unlike traditional recipes that call for refined granulated sugar, you’ll use a bit of pure maple syrup to sweeten your healthy blueberry waffles instead. You want the kind that comes directly from maple trees! The only ingredient on the label should be “pure maple syrup,” and it’s often sold in thin glass bottles or squat plastic jugs (like this!).

Tip: I only added a very small amount of maple syrup to my waffle batter because I know my family loves to generously drizzle maple syrup all over their cooked waffles… So mixing more into the batter seemed a little silly! 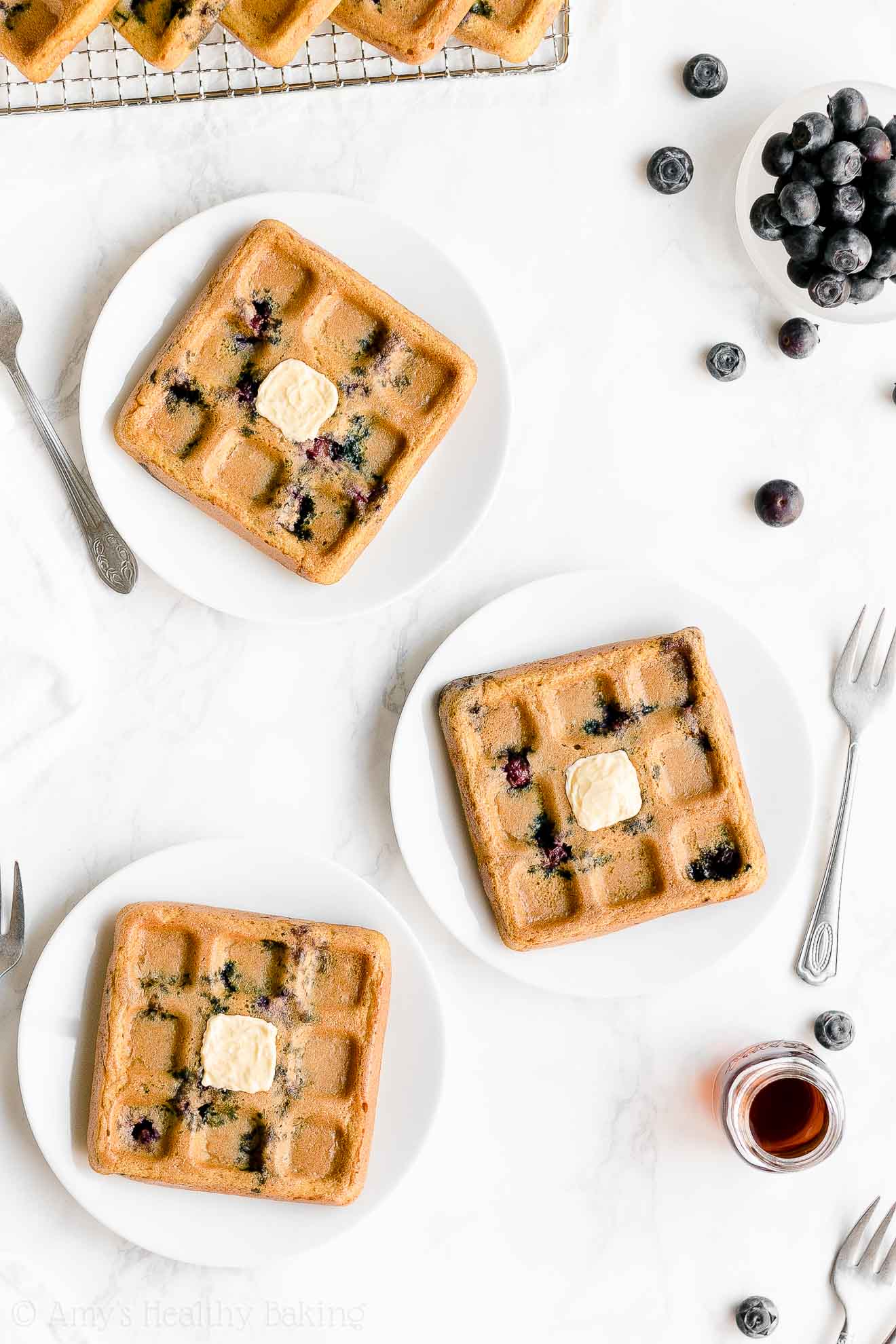 Nerd Alert #1!
Remember how I promised to explain why you need both baking soda and baking powder? Well… That’s because you’re adding a special secret ingredient into the batter! Which is…

Plain white vinegar! No, I haven’t lost my mind. (Although some people may beg to differ…) The vinegar (an acid) reacts with the baking soda (a base) to create air bubbles. Those air bubbles make your healthy blueberry waffles rise nice and tall, which gives them a lighter and fluffier texture on the inside.

And no, I promise you cannot taste the vinegar in your cooked waffles. Pinky swear! 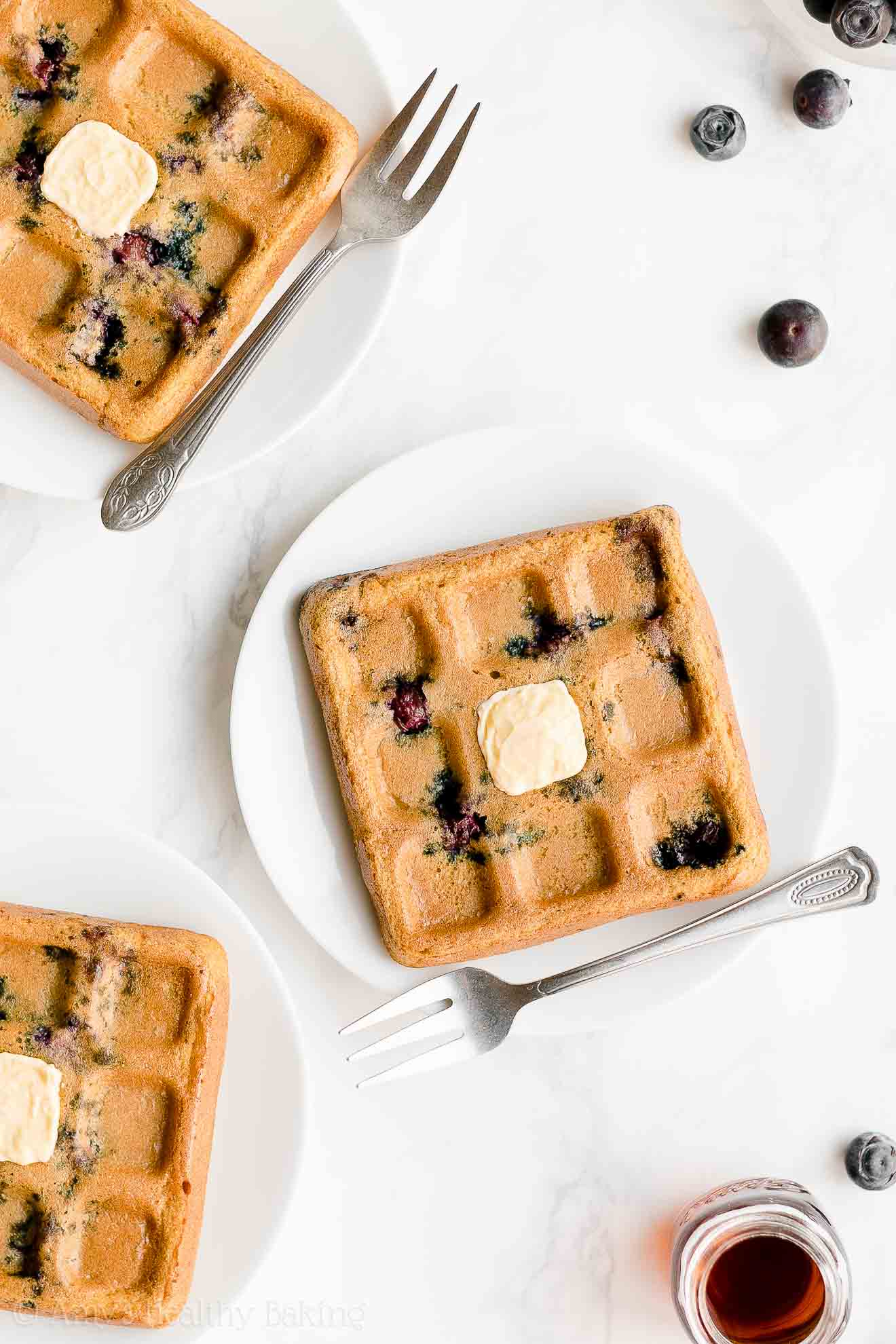 Finally, you’ll need one more key ingredient: fresh blueberries! It’s impossible to make healthy blueberry waffles without them, right? I prefer using fresh ones because they taste a little bit juicier to me and don’t stain the waffle batter gray like frozen blueberries do, but you can still substitute frozen blueberries in a pinch!

Of course, it’s also impossible to make waffles without… 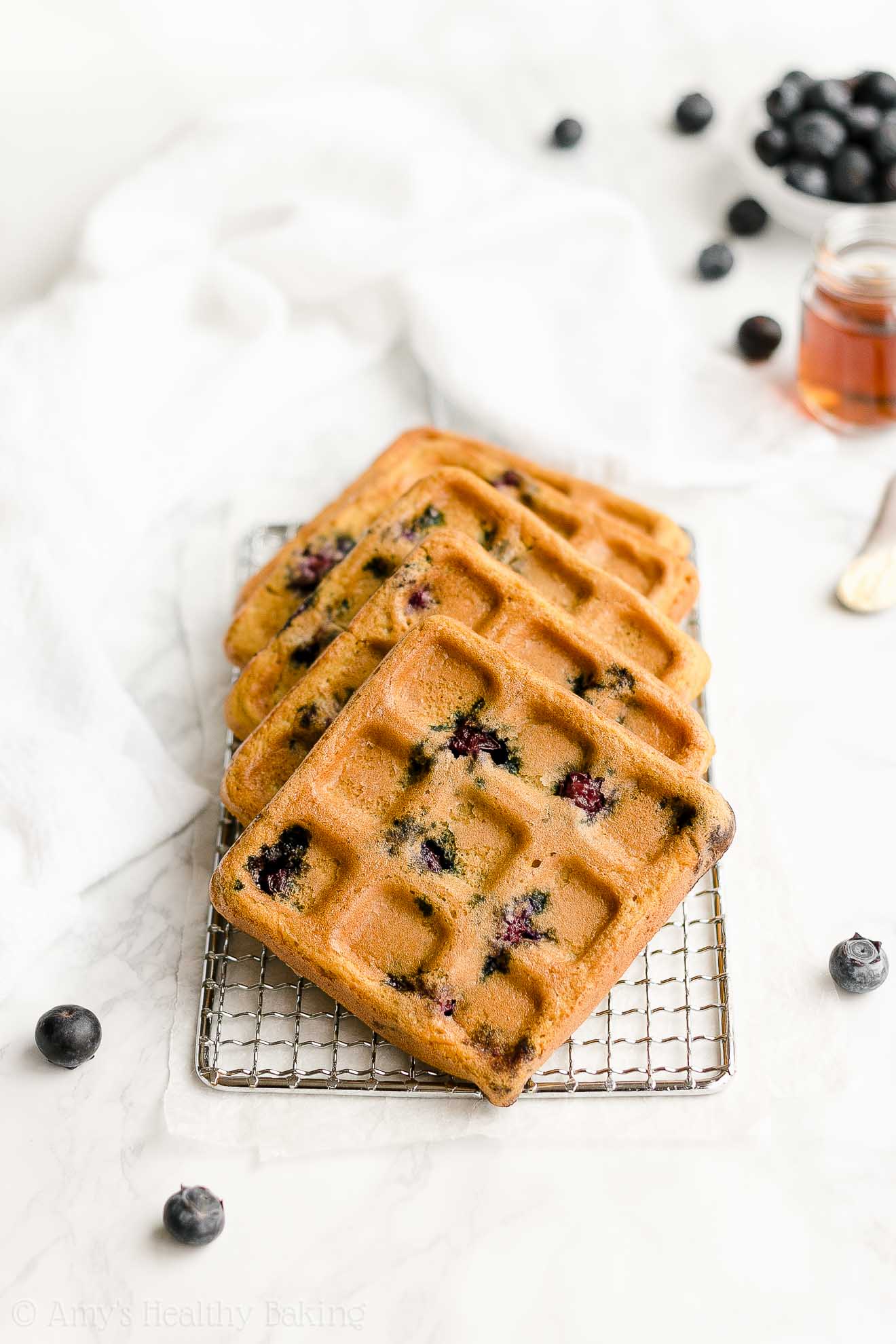 Waffle pans! You probably thought I was going to say a waffle maker, right? Nope! I use these waffle pans to make these healthy blueberry waffles. They’re inexpensive and easy to store, and they work so well! I usually avoid buying “one use” pans, but these are worth every penny because they yield the thickest and fluffiest waffles I’ve ever eaten!

Hint: I specifically designed this waffle batter and recipe for baking in waffle pans. When made with a waffle iron, the waffles don’t turn out quite as well, but I go over how to solve that in the Notes section of the recipe! 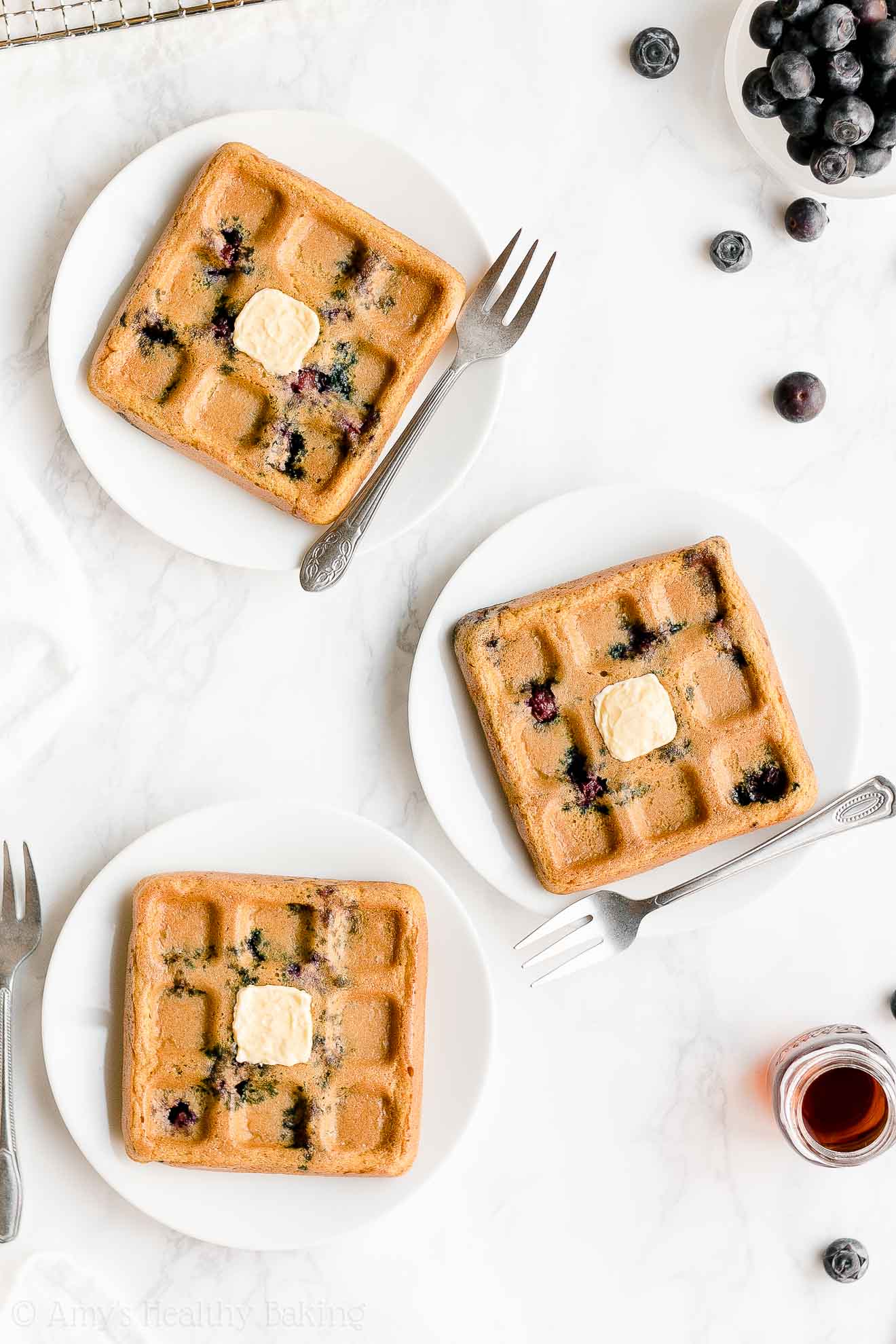 Nerd Alert #2!
This just might be the most important part of this healthy blueberry waffle recipe… You actually need to complete one more step in between when your waffles finish baking and before you eat them!

In order to make these healthy blueberry waffles really moist and fluffy on the inside, you use ingredients that also cause them to be tender on the outside… Not crisp and crunchy, the way I want the outsides of my waffles to be. Traditional recipes call for extra butter to achieve that texture contrast, but I did something else…

I popped my waffles in the toaster oven! Just like the frozen waffles I grew up eating, when you toast these healthy blueberry waffles for a little bit, they get that perfectly crisp and crunchy texture on the outside, while still maintaining their moist and fluffy texture on the inside. I promise it’s worth every second of impatiently waiting for them to toast! 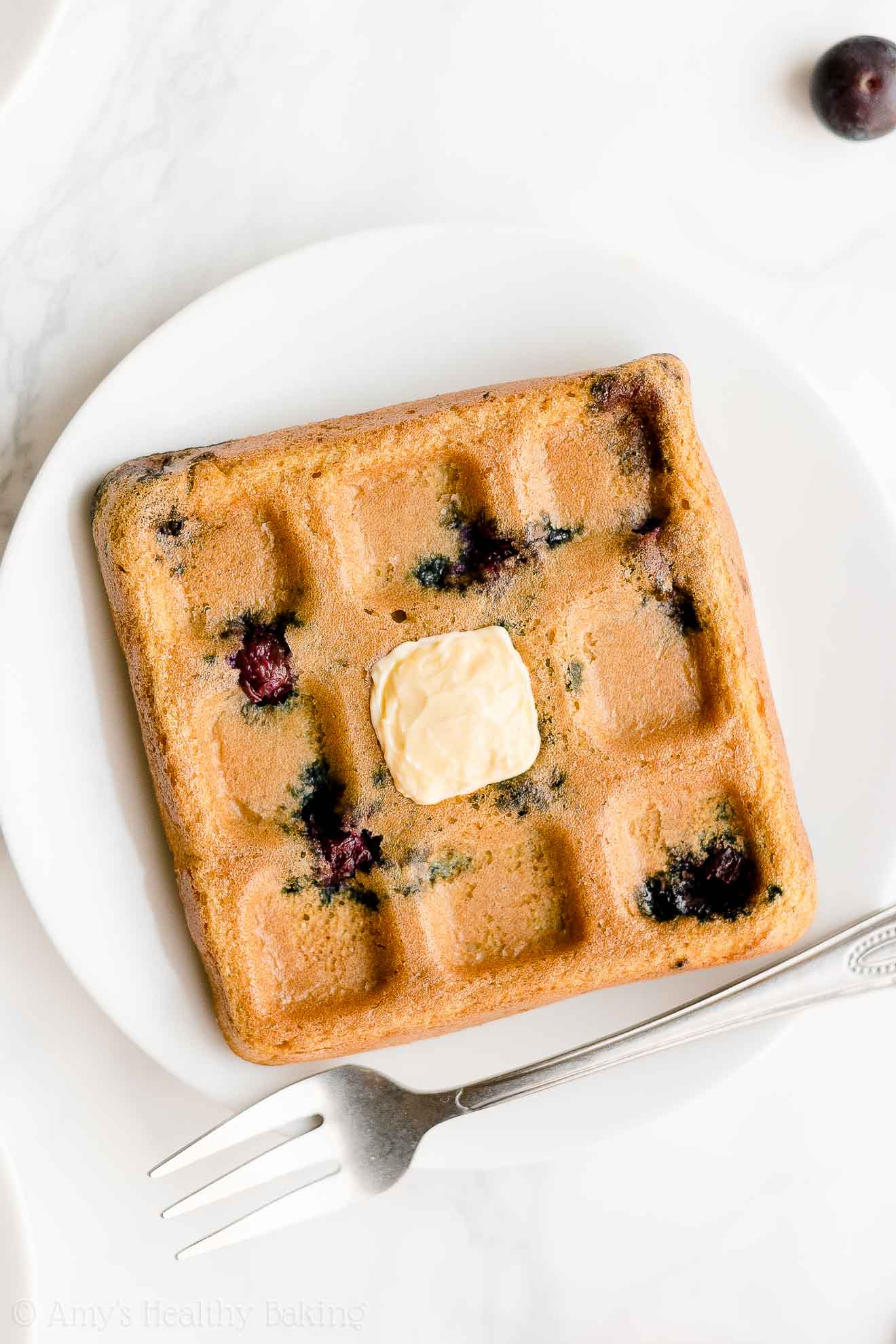 That definitely looks like true waffle bliss to me! And when you make your own, remember to snap a picture and share it on Instagram using #amyshealthybaking and tagging @amyshealthybaking IN the photo itself! (That guarantees I’ll see your picture! ?) I’d love to see your healthy blueberry waffles!

Click here to PIN the recipe and save it for later!
Yields: 12 waffles
This recipe is a true family favorite! These waffles are moist and fluffy on the inside, crisp and crunchy on the outside, and full of sweet juicy blueberries. They’re perfect for lazy weekend brunches or even meal prepping! Leftovers will keep for at least five days if stored in an airtight container in the refrigerator, and they also freeze really well.
Notes: For the gluten-free flour, I recommend the following: 1 cup (120g) millet flour, ¾ cup (90g) tapioca flour, ½ cup (60g) brown rice flour, and 1 ½ teaspoons xanthan gum. Most store-bought gluten-free flour blends (like this one!) will also work, if measured like this.

I prefer fresh blueberries because they taste a little juicier and don’t stain the waffle batter gray, like frozen ones do. In a pinch, you may substitute frozen blueberries, but your waffles may take an extra minute or two to bake.

These are the waffle pans that I use. They’re totally affordable and worth every penny! I baked waffles at least once a week for two months straight, and the pans still acted like they were as good as new!

The blueberries will most likely poke up out of the batter after you’ve spread the batter into the waffle pans. That’s fine! The batter will rise up and completely engulf the blueberries after baking.

Make sure to generously coat your waffle pans with cooking spray! The blueberries release juice as the waffles bake, and the juice can make the waffles stick more to the pans if you don’t spray them well.

The Healthier Chocolate Treats cookbook is perfect for any and all chocolate lovers. Whether you enjoy chocolate occasionally or every single day (that’d be me!), there are plenty of goodies inside for you! Healthier Chocolate Treats contains 50+ brand new healthier recipes. These recipes have never been seen before or appeared on my blog. You won’t find them anywhere else! And yes—every single one contains some form of chocolate. Whether you prefer milk, dark or white, there are lots of treats inside for you!     What Inspired You to Write Healthier Chocolate Treats? I have always loved chocolate. Every Halloween throughout my childhood, I inverted the entire contents of my bright orange jack-o-lantern bucket … END_OF_DOCUMENT_TOKEN_TO_BE_REPLACED