JUMP TO RECIPE PRINT RECIPE
Learn how to make these rich mini chocolate cupcakes from scratch! They’re just 35 calories! They’re incredibly moist and completely packed with decadent chocolate flavor, and the creamy swirls of raspberry frosting are the perfect topping! 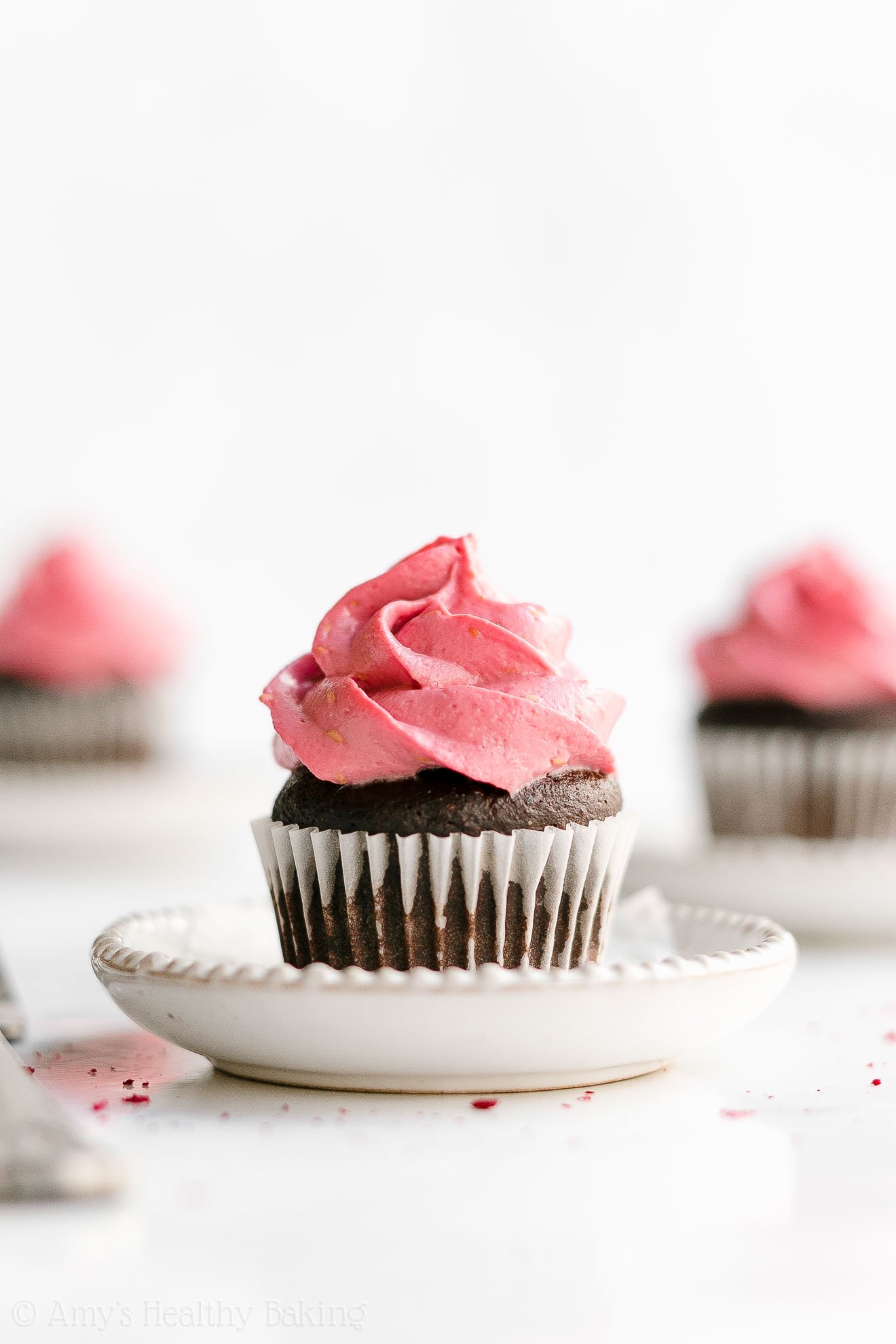 Partway through college, I actually began to look forward to finals week. Not because I enjoyed exams like Hermione Granger in the Harry Potter series… But because I knew I’d get a break that lasted at least a week or two (if not the entire summer!) after I turned in my last test.

At the end of my junior year, I started a new studying routine. After an hour of poring over my notes or focusing on practice exams, I took a short break to clear my head and rest my brain, which was just enough time to… 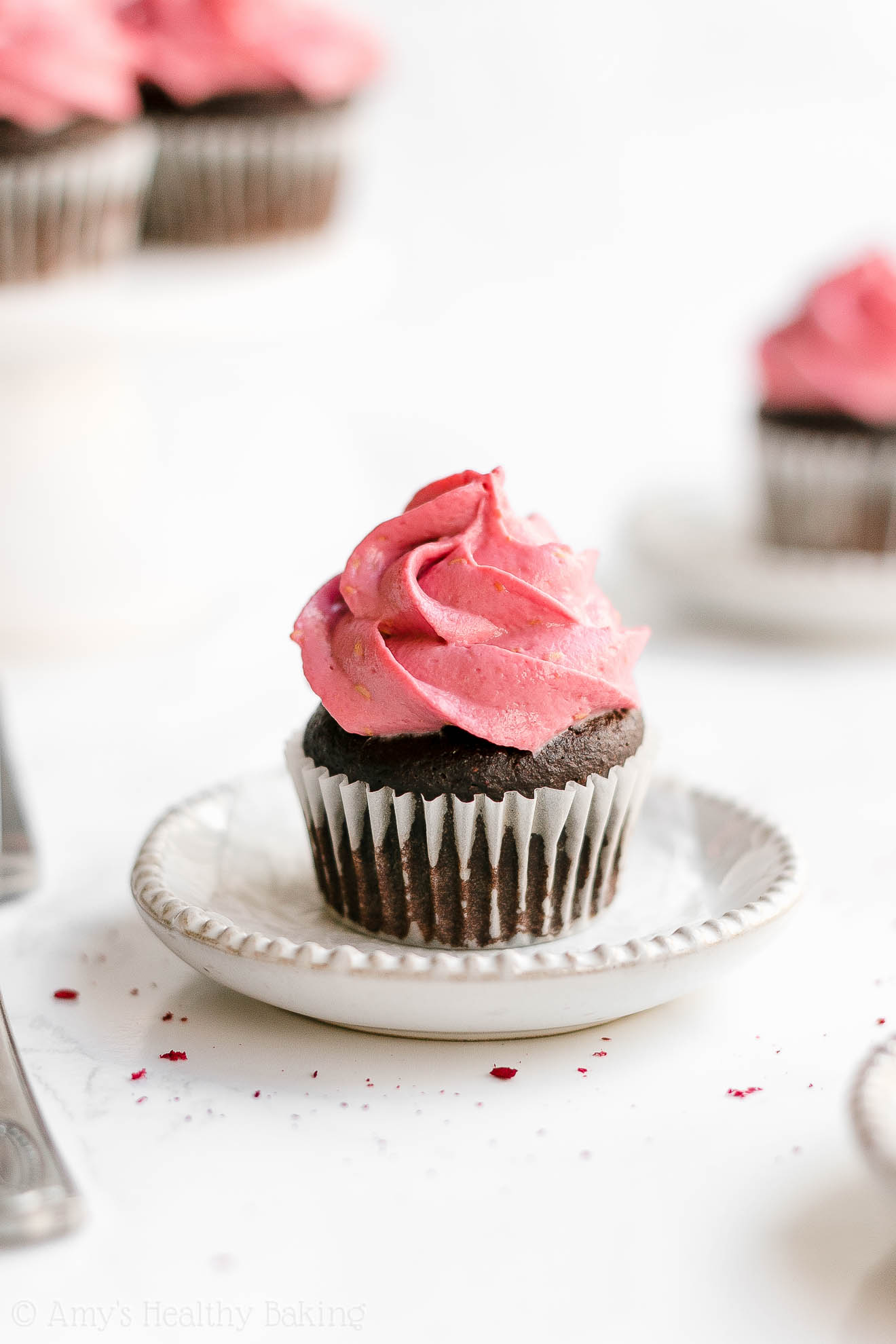 Watch one round of Cupcake Wars! I stumbled upon that Food Network TV series on Hulu, and since each episode contained three rounds of competition, with one of the four bakers eliminated after each round, one episode got me through at least three hours of studying.

The show always had a panel of three judges critiquing the contestants’ treats: Florian Bellanger, a famous French pastry chef; Candace Nelson, the founder of Sprinkles Cupcakes; and one guest judge, related to that particular episode’s theme. Although I marveled over almost every single cupcake all of the bakers produced, especially when performing under such short time constraints, those three judges had very high standards… And I can’t imagine how nerve wracking it must have felt to stand in front of them and serve them freshly baked cupcakes!

I now follow Candace Nelson on Instagram, and when she recently shared a post about an upcoming season of her new Netflix series, Sugar Rush, I started thinking about my Cupcake Wars study sessions… 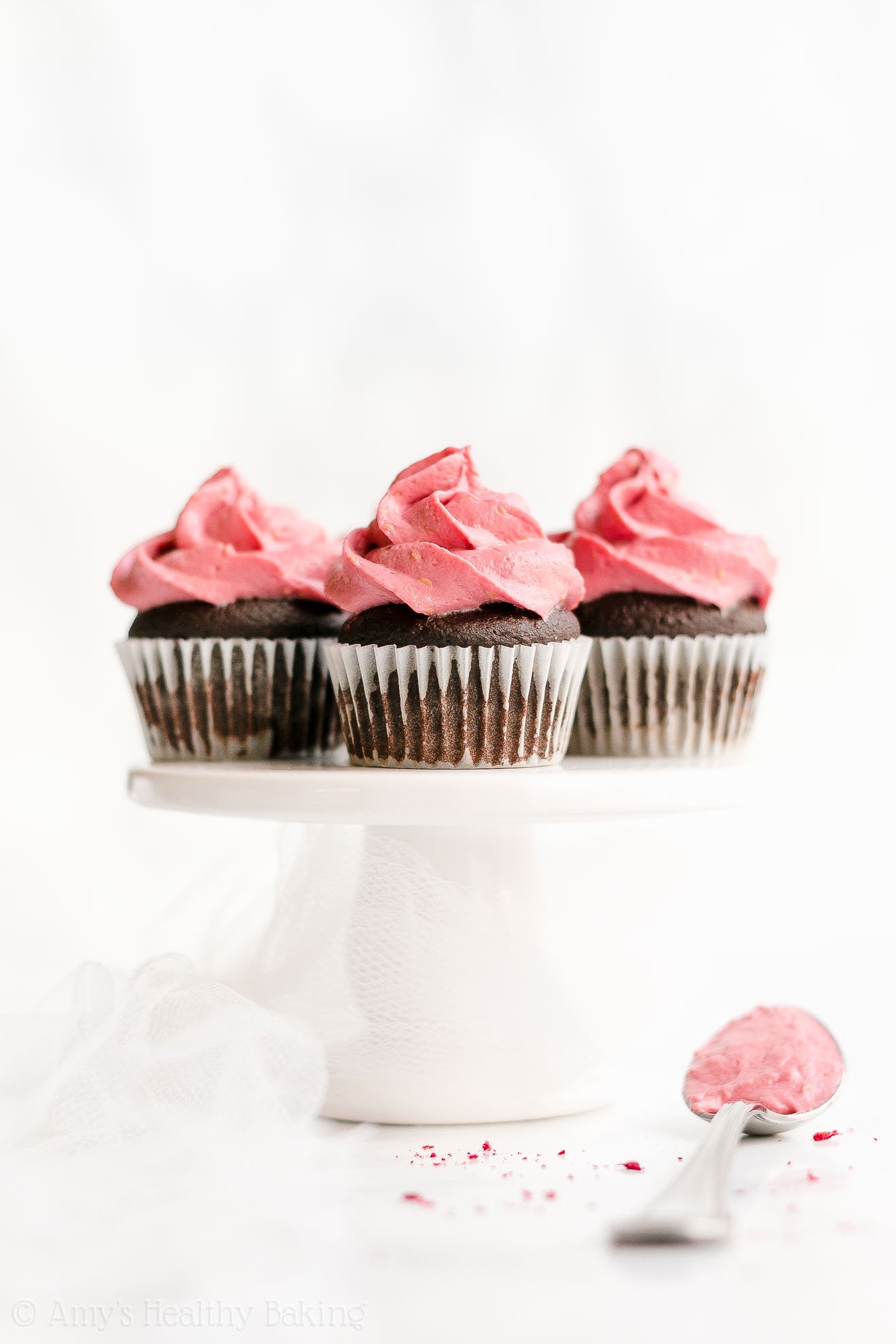 Which resulted in a big craving for cupcakes. So I baked these Healthy Small Batch Mini Chocolate Cupcakes with Raspberry Frosting to satisfy my sweet tooth! Although not nearly as exotic as some of the flavors on Cupcake Wars, these sweet treats still taste incredible. They’re supremely moist and tender with lots of rich and decadent chocolate flavor, and the gorgeous swirls of raspberry frosting add the perfect finishing touch!

Also unlike those contestants’ cupcakes? These contain no refined flour or sugar and just 35 calories!

I have no idea whether Candace Nelson would approve… But I certainly hope so! 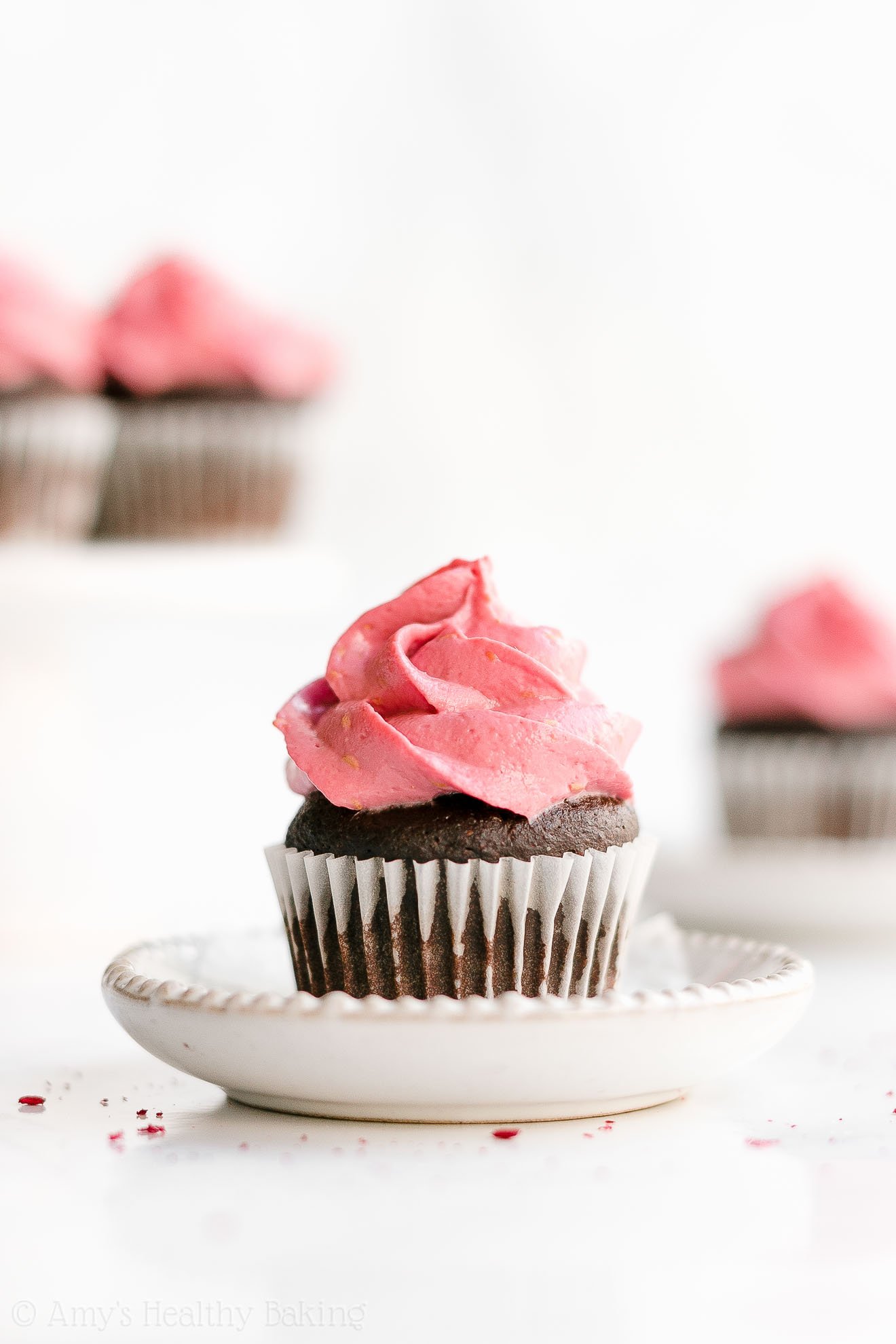 So let’s go over how to make these healthy small batch mini dark chocolate cupcakes! 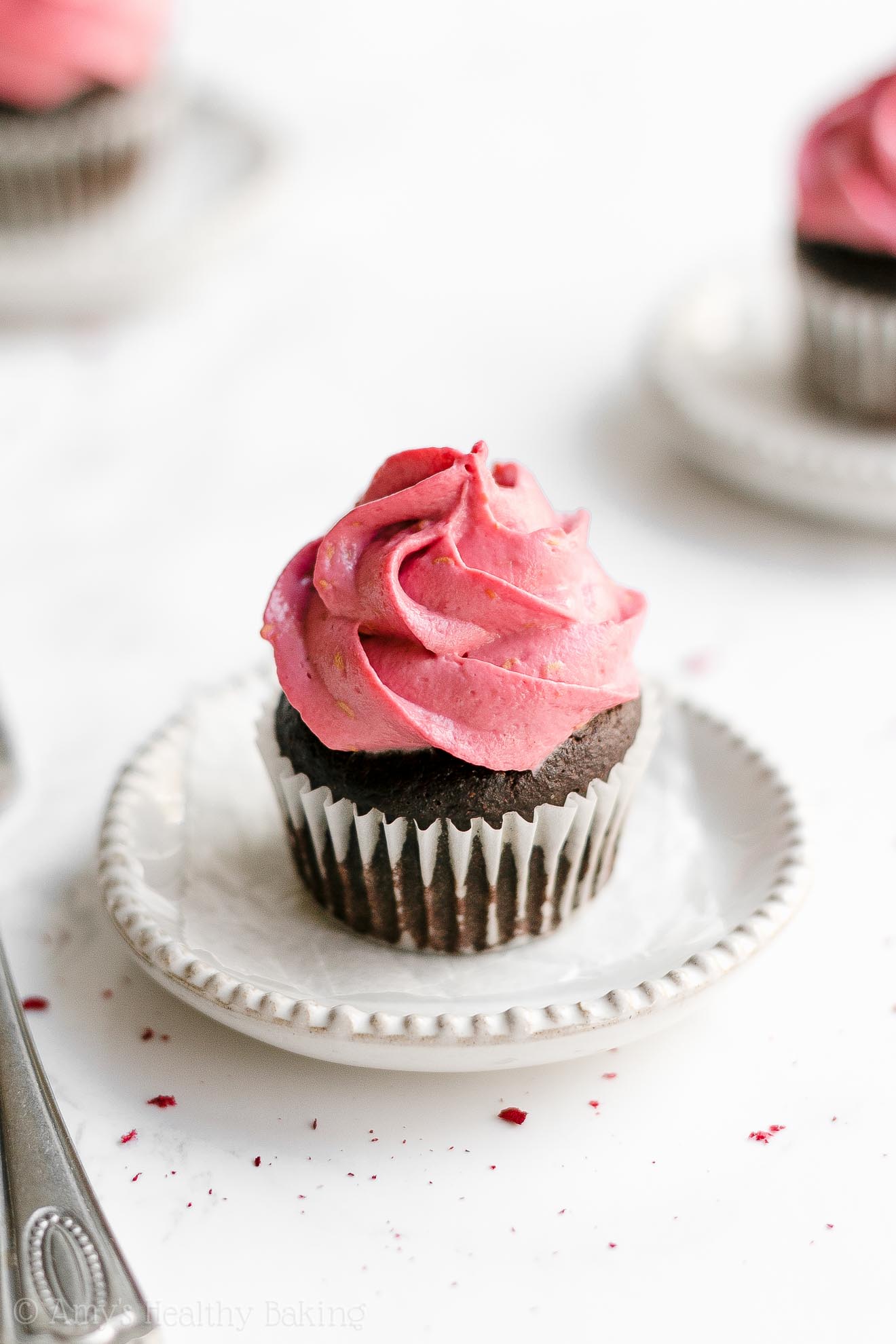 Whereas traditional cupcake recipes call for lots of butter or oil to keep them moist and tender, you just need 1 teaspoon in this recipe. Yes, that’s it! That really helps keep these healthy small batch mini chocolate cupcakes low fat and low calorie!

Then the rest of their tender texture comes from one of my favorite ingredients in healthy baking… Greek yogurt! Greek yogurt adds the same moisture to your batter as extra butter or oil but for a fraction of the calories. It also gives your healthy small batch mini chocolate cupcakes a protein boost!

Moist and tender… Low fat and low calorie… Lots of Greek yogurt… Does that make these breakfast food?? (I might have an even more convincing case for that later, once we get to the frosting!) 😉 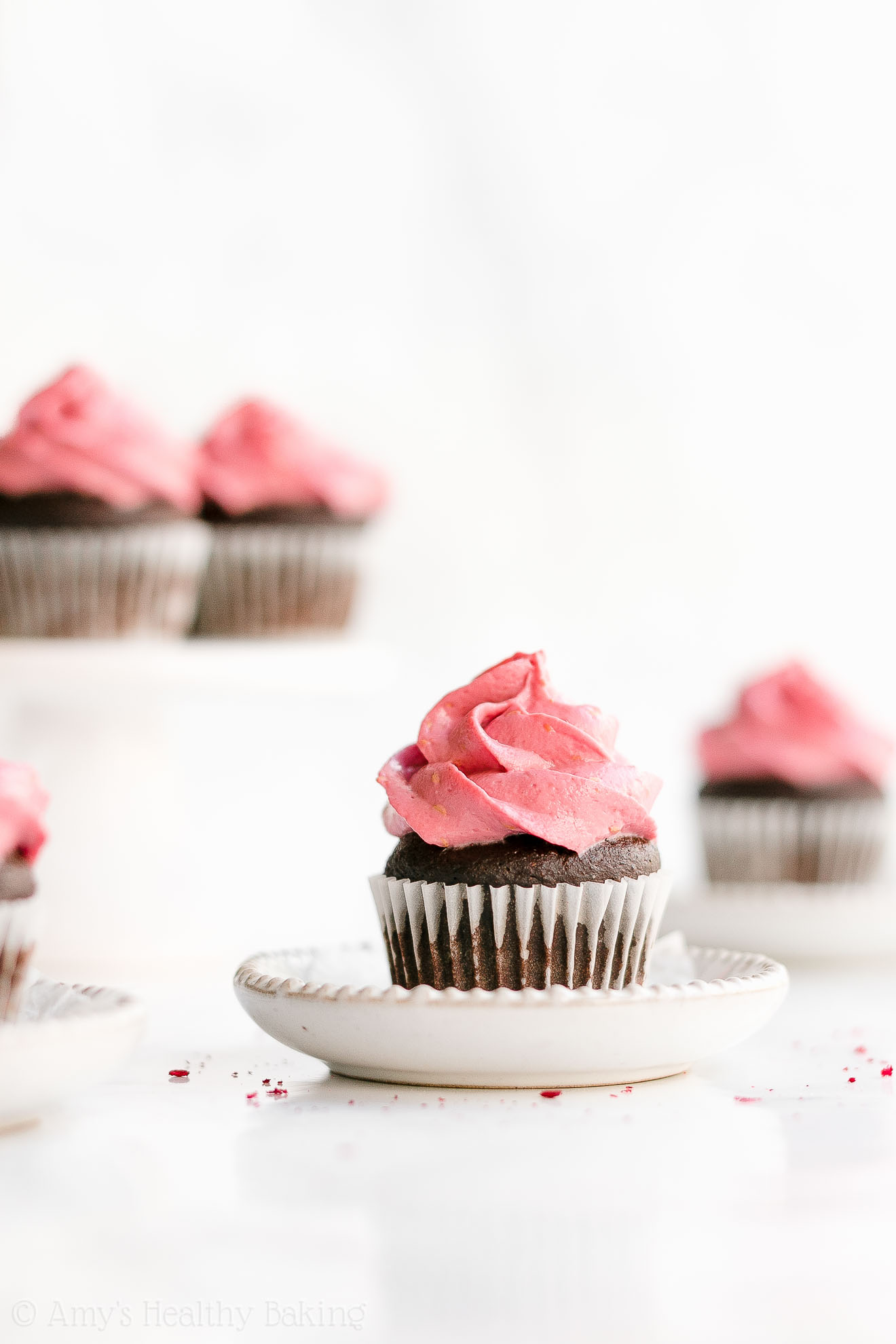 You’ll skip the refined granulated sugar and sweeten your cupcakes with another two of my favorite ingredients: liquid stevia and confectioners’ style erythritol. Yes, two. You need both sweeteners!

Both the liquid stevia and confectioners’ style erythritol are plant-based, no-calorie sweeteners that contain nothing refined or artificial (aka they’re clean eating friendly). The liquid stevia is very concentrated, which is why you only need a small amount, whereas the erythritol sweetens cup-for-cup like regular sugar (just without the calories!).

I always try really, really hard to make recipe ingredient lists simple for you. I know it isn’t fun to track down extra ingredients, but I promise it’s easy for this recipe. I buy both of these sweeteners online! Here for the liquid stevia and here for the erythritol.

When I tried making these cupcakes with just the liquid stevia, they didn’t taste sweet enough to be called a dessert. In my experience, something about cocoa powder mutes stevia’s sweetness. I’m not sure why (but as an ex-chemist, I really want to know!). Yet when I added in a small amount of the confectioners’ style erythritol, these healthy small batch mini chocolate cupcakes tasted perfect! Rich, chocolaty, and completely sweet, just like regular cupcakes! 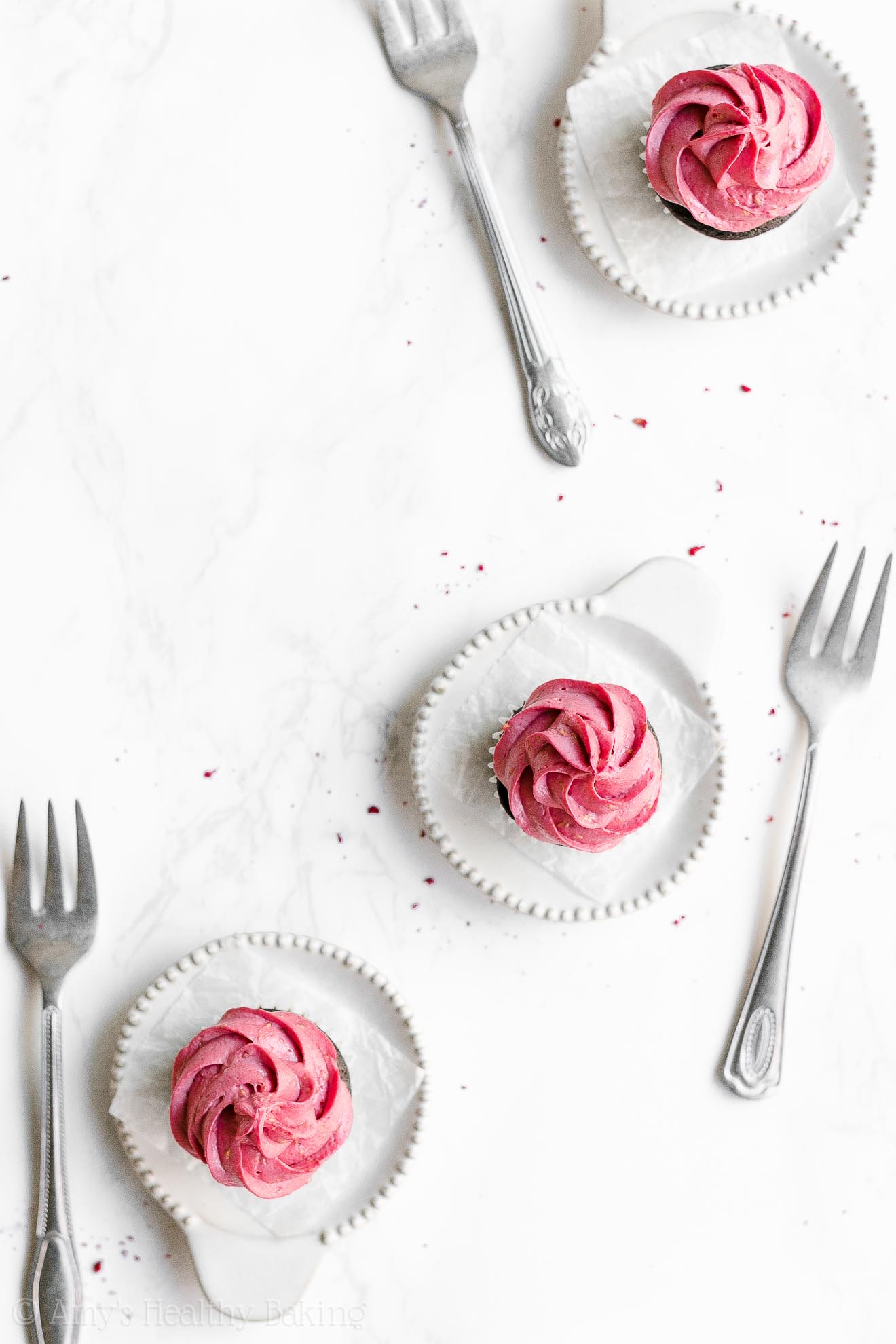 Before you add the batter to your mini muffin cups, remember to coat your cupcake liners with cooking spray. This is super important! Low fat batters, like this one, tend to stick to liners like superglue. But when you coat your liners with cooking spray first, they peel away from these healthy small batch mini chocolate cupcakes much more easily!

Tip: If you forget to coat your liners, or you don’t coat them well enough, then seal your mini cupcakes inside of an airtight container for 24 hours. This helps loosen the liners a bit more! 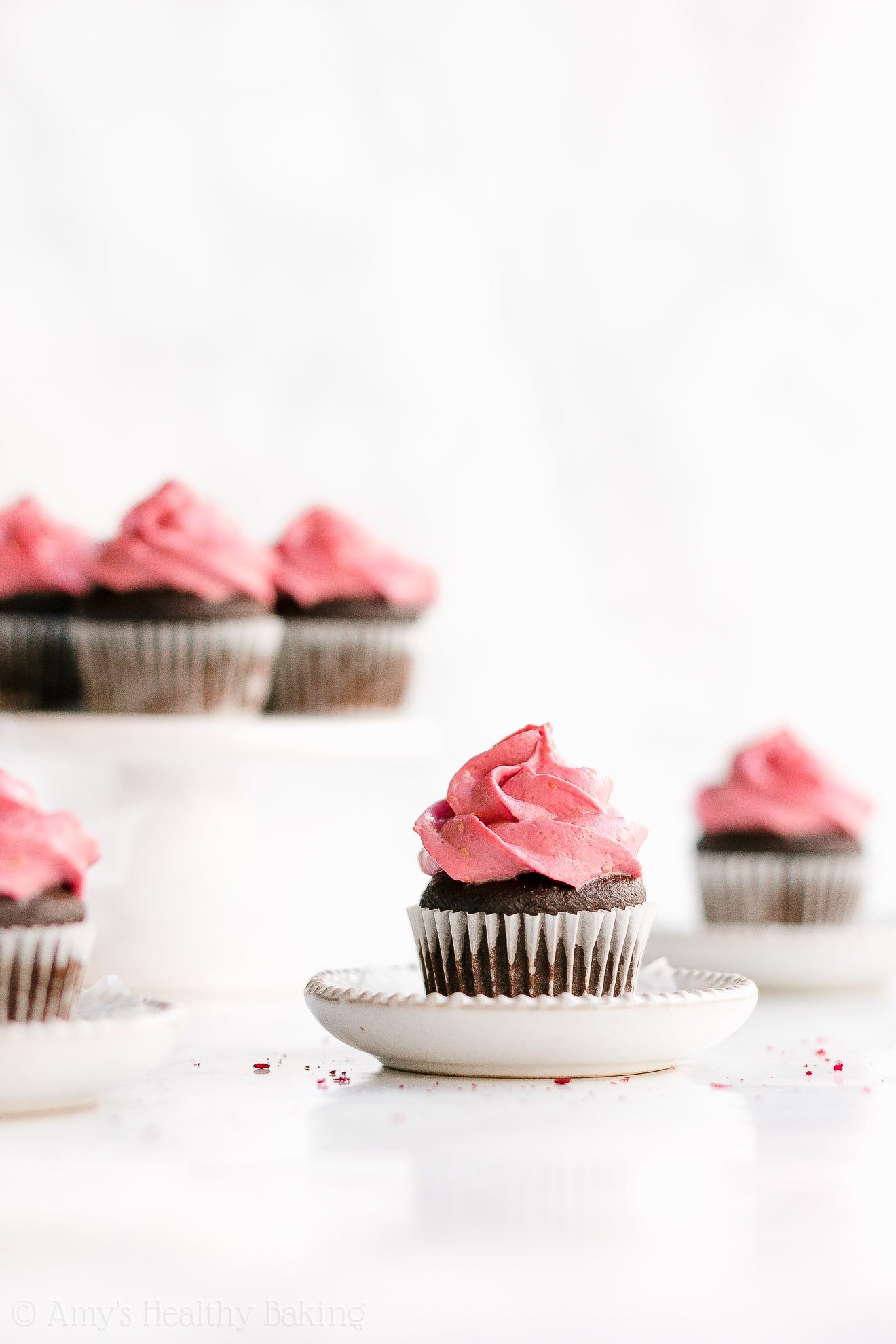 Time to make the frosting! How gorgeous is that bright pink color? That’s all from fruit—no food coloring in this frosting! But you can’t use just any fruit…

Freeze dried raspberries are on the crisp and crunchy side, so you’ll grind them into a fine powder before adding them to your frosting. A blender, a food processor, and even a coffee grinder will all work! 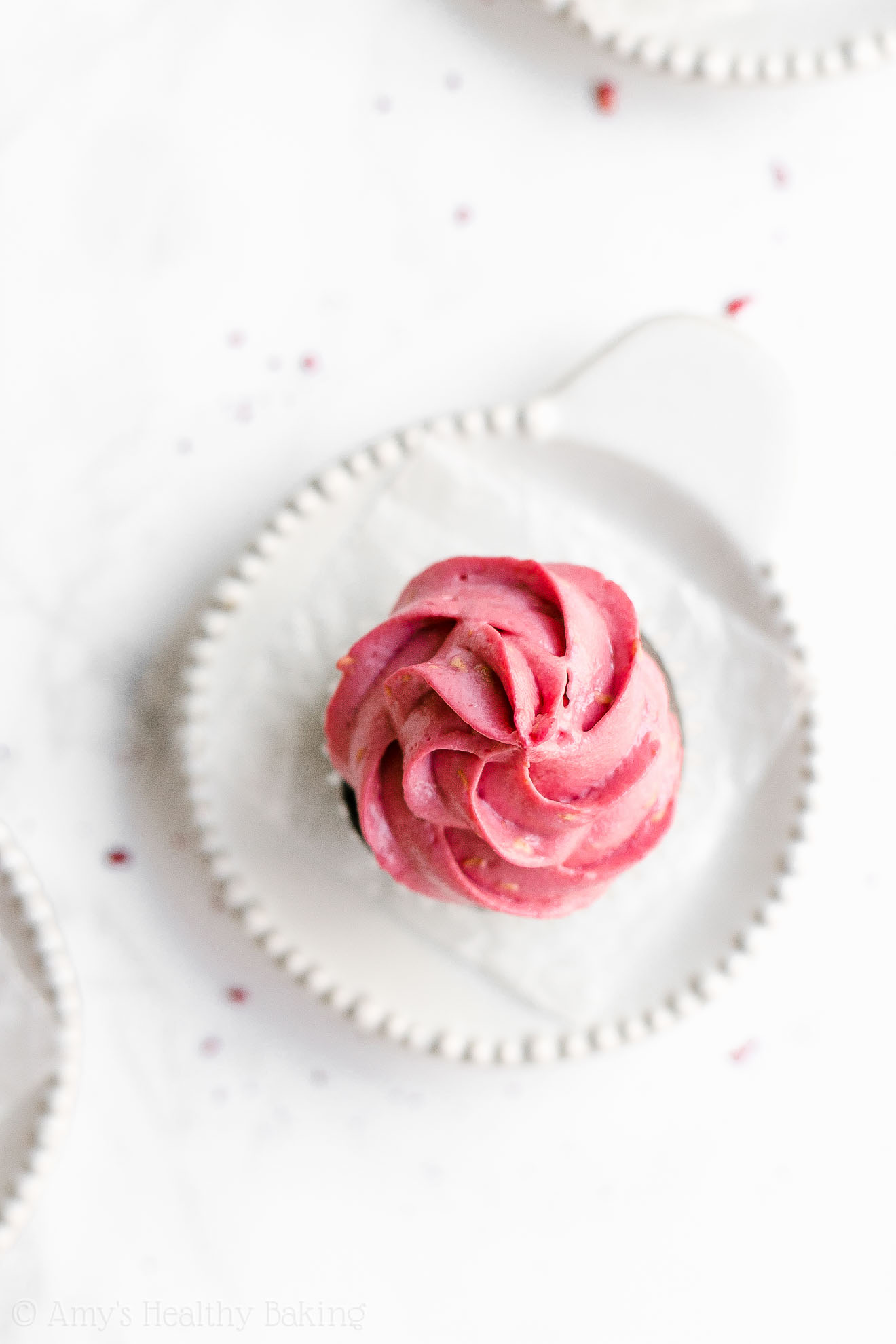 Then for the rest of the frosting ingredients, you’ll need Greek yogurt, instant pudding mix, and more liquid stevia. I know… Instant pudding mix? In frosting?? It sounds a little weird, but it’s my secret trick to pipe-able frosting!

The instant pudding mix thickens the Greek yogurt while the frosting chills, which makes your healthy raspberry frosting just as thick and creamy as regular buttercream frosting. This means you can pipe those gorgeous swirls on top of your healthy small batch mini chocolate cupcakes!

And since this healthy frosting is made from Greek yogurt and fruit… And the cupcakes contain even more Greek yogurt… Does that officially make them breakfast food?? 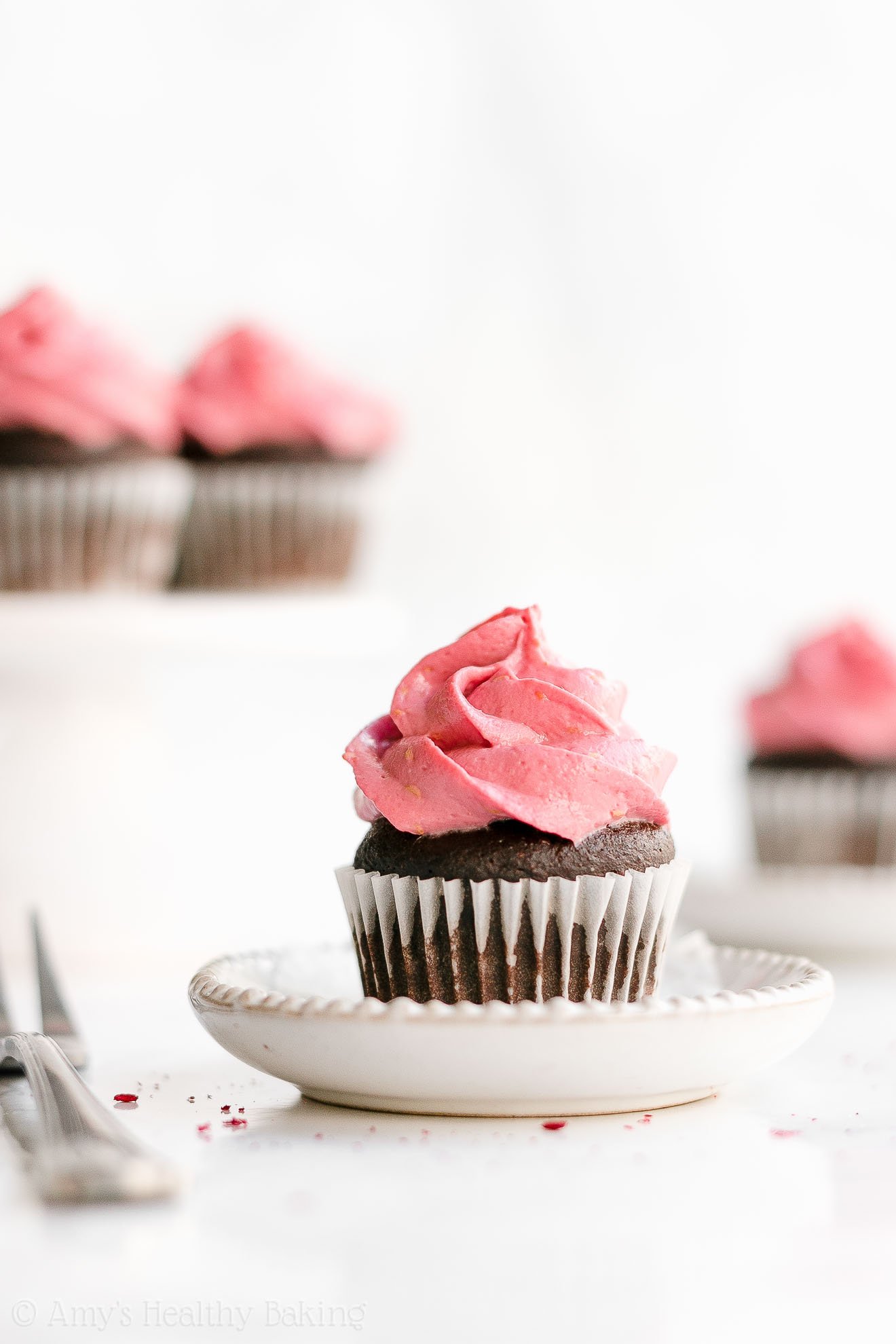 Either way… I’d definitely eat these any time of day—and I even might not want to share any! 😉 And when you make your own, remember to snap a picture and share it on Instagram using #amyshealthybaking and tagging @amyshealthybaking IN the photo itself! (That guarantees I’ll see your picture! 🙂 ) I’d love to see your healthy small batch mini chocolate cupcakes with raspberry frosting! 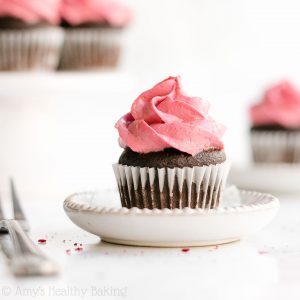 © Amy's Healthy Baking
Yields: 20 mini cupcakes
I absolutely love these mini cupcakes! They’re supremely moist and full of rich chocolate flavor, similar to 72% dark chocolate. The creamy swirls of gorgeous raspberry frosting add the perfect finishing touch! The cupcakes are best if eaten the same day they’re frosted, but they’ll keep for at least three days (if not longer) if stored in an airtight container in the refrigerator.
5 from 1 vote
Print Recipe Pin Recipe

IMPORTANT MEASURING NOTE – READ BEFORE BEGINNING: Be very careful and measure the flour and cocoa powder using this method or a kitchen scale. (← That’s the one I own and love!) Too much of either will dry out your batter. Too much cocoa powder will also make your cupcakes taste bitter.   IMPORTANT MIXING NOTE – READ BEFORE BEGINNING: Do not use an electric mixer to mix up the cupcake batter. This will result in dense or tough cupcakes. Use a whisk where instructed, and use a fork for everything else.   FLOUR ALTERNATIVES: Whole wheat pastry flour, regular whole wheat flour or all-purpose flour may be substituted for the white whole wheat flour.   STEVIA NOTES: I highly recommend using the liquid stevia! It’s one of my favorite ingredients (you’ll use it in all of these recipes of mine!), and I buy it online here because that’s the cheapest price I’ve found.   If you prefer not to use stevia in the cupcakes, substitute 6 tablespoons (90mL) of agave, honey, or pure maple syrup for the liquid stevia AND reduce the milk to 3 tablespoons (45mL). (The batter should be fairly thick, similar to muffin batter.)   If you prefer not to use the liquid stevia in the frosting, then substitute ¼ cup of Truvia, granulated sucralose, or powdered sugar.   ERYTHRITOL NOTES: I buy my confectioners’ style erythritol online here. If you prefer not to use erythritol, then substitute 2 tablespoons (24g) of coconut sugar, brown sugar, or granulated sugar. Granulated sucralose will also work in place of the confectioners’ style erythritol, if you prefer a different no-calorie granulated sweetener.   I usually try to use just one sweetener to make life easier for you! However, I found that the cocoa powder muted the liquid stevia’s sweetness. Once I added those 2 tablespoons of confectioners’ erythritol, the cupcakes tasted SO much sweeter, like true store-bought cupcakes—so I promise it’s worth using both!   MILK ALTERNATIVES: Any milk may be substituted for the nonfat milk.   GREEK YOGURT FROSTING NOTE: For the frosting, I’ve found that not all Greek yogurt brands are equally thick! This is my favorite one for my Greek yogurt frosting because it’s the thickest brand I’ve found, which helps your raspberry frosting holds its shape so much better.   INSTANT PUDDING MIX NOTES: This is the instant pudding mix that I use. You just need the dry instant pudding mix—don’t prepare it according to the package directions! You can omit it (for a clean eating option), but the frosting won’t be as thick, and you’ll probably need to spread it on the cupcakes instead of piping it.   FREEZE DRIED RASPBERRIES NOTE: I’ve found freeze dried raspberries at Target and Trader Joe’s! If you can’t find freeze dried raspberries, use this raspberry frosting recipe of mine instead.   GLUTEN FREE OPTION: For the gluten free flour, use the following blend: ¼ cup (30g) millet flour, 2 tablespoons (15g) tapioca flour, 2 tablespoons (15g) brown rice flour, and ¼ teaspoon xanthan gum. Most store-bought gluten free flour blends (like this one!) should work as well, if measured like this.   TO MAKE STANDARD SIZED CUPCAKES: This cupcake recipe is easily doubled to yield 12 standard size cupcakes! (You shouldn’t need to double the frosting. This frosting recipe makes a lot!) Remember to generously coat the cupcake liners with nonstick cooking spray first. Bake the standard size cupcakes at 350°F for 19-21 minutes or until the centers feel firm to the touch and a toothpick inserted into the center comes out clean.   {gluten free, clean eating option, low fat, low sugar}
DID YOU MAKE THIS RECIPE?I'd love to hear what you think of it in a comment below! If you take a picture, tag @amyshealthybaking on Instagram or use the hashtag #amyshealthybaking.

The Healthier Chocolate Treats cookbook is perfect for any and all chocolate lovers. Whether you enjoy chocolate occasionally or every single day (that’d be me!), there are plenty of goodies inside for you! Healthier Chocolate Treats contains 50+ brand new healthier recipes. These recipes have never been seen before or appeared on my blog. You won’t find them anywhere else! And yes—every single one contains some form of chocolate. Whether you prefer milk, dark or white, there are lots of treats inside for you!     What Inspired You to Write Healthier Chocolate Treats? I have always loved chocolate. Every Halloween throughout my childhood, I inverted the entire contents of my bright orange jack-o-lantern bucket … END_OF_DOCUMENT_TOKEN_TO_BE_REPLACED