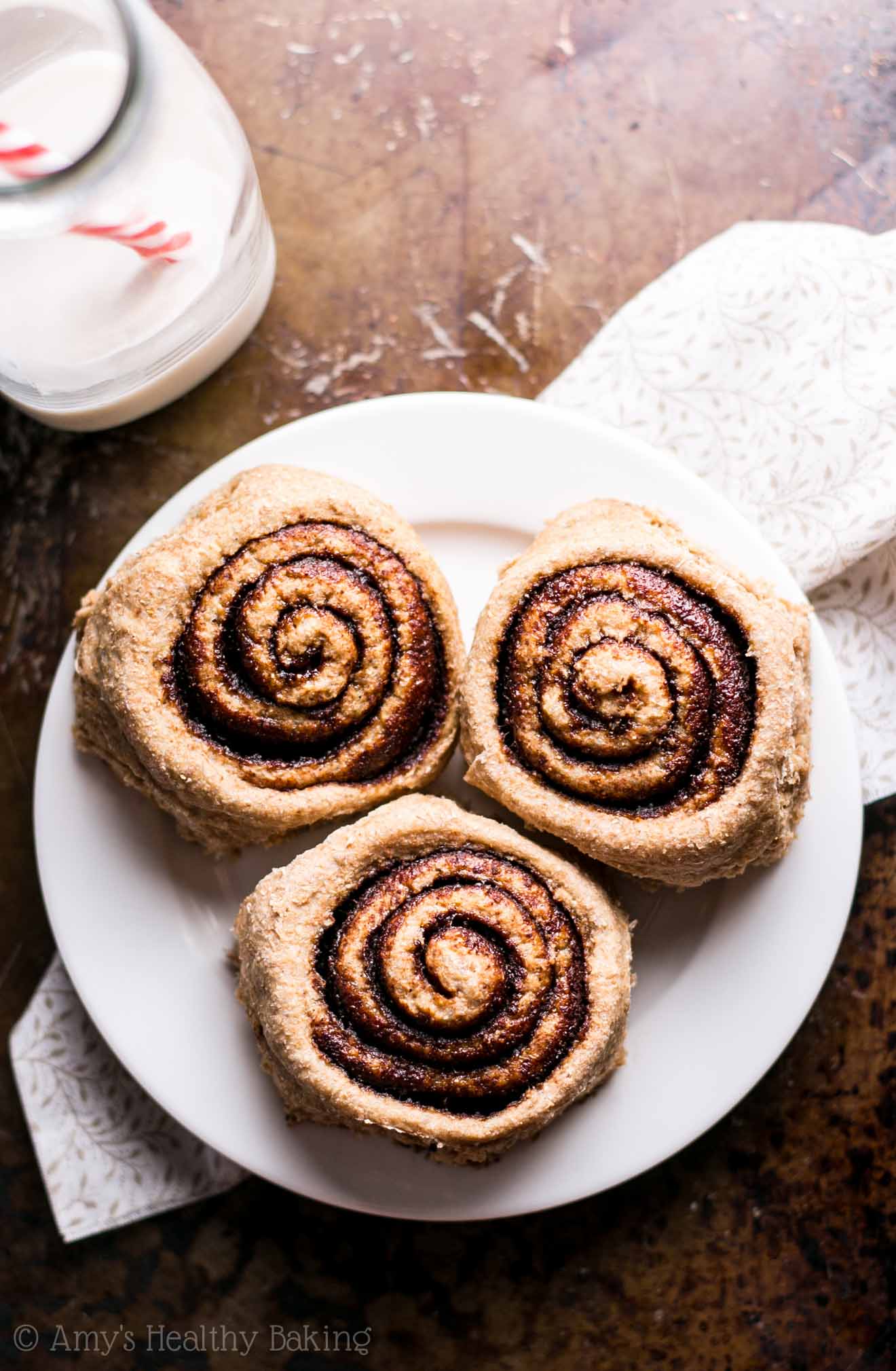 The summer after my brother graduated from high school, our family flew to France for a summer vacation. We spent the first few days in Paris exploring a few of our favorite parts of the city from our previous trip, like the Louvre and the Eiffel Tower, as well as a few new ones, including the Palais Garnier and the Panthéon, before driving east to the Alps.

We stayed in a small apartment situated about a mile away from the Notre Dame and located on the third level of that particular historic building. (With its age, it lacked an elevator, so we lugged our heavy suitcases up multiple flights of incredibly narrow stairs!) Split into two levels, the master bedroom and bathroom overlooked the sitting area below, and a door from the adjacent kitchen area led into the kids’ room with bunk beds. 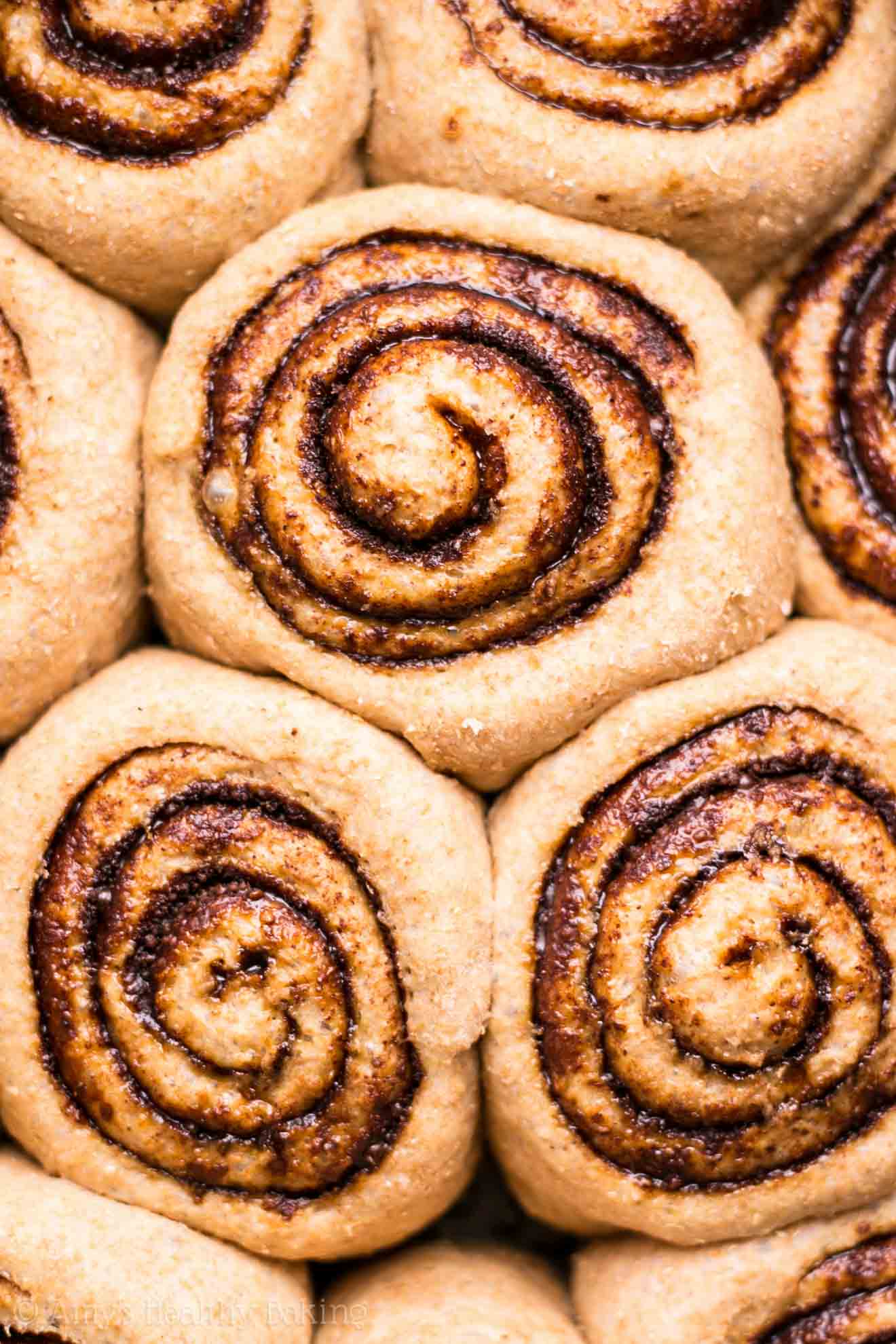 We only dined out for a few lunches, opting to grab something quick like a sandwich or slice of quiche from patisseries while walking and sightseeing during the day, and we perched on the bar stools scattered around the apartment’s large kitchen island to eat the rest of our meals. With a short two-block walk to the nearest grocery store, where we purchased fresh produce and plenty of fancy soft cheeses, and an even shorter half-block walk to the boulangerie on the street corner, we usually enjoyed those smorgasbord meals at home more than the lunches out!

At least twice a day, we stopped by that boulangerie. Every afternoon while on our way back from our tourist activities, we picked up a long, thin, freshly baked baguette to pair with the cheese in our fridge, and we tore off piece after piece of the soft yet crusty loaf, continuing to nibble long after our stomachs were full. 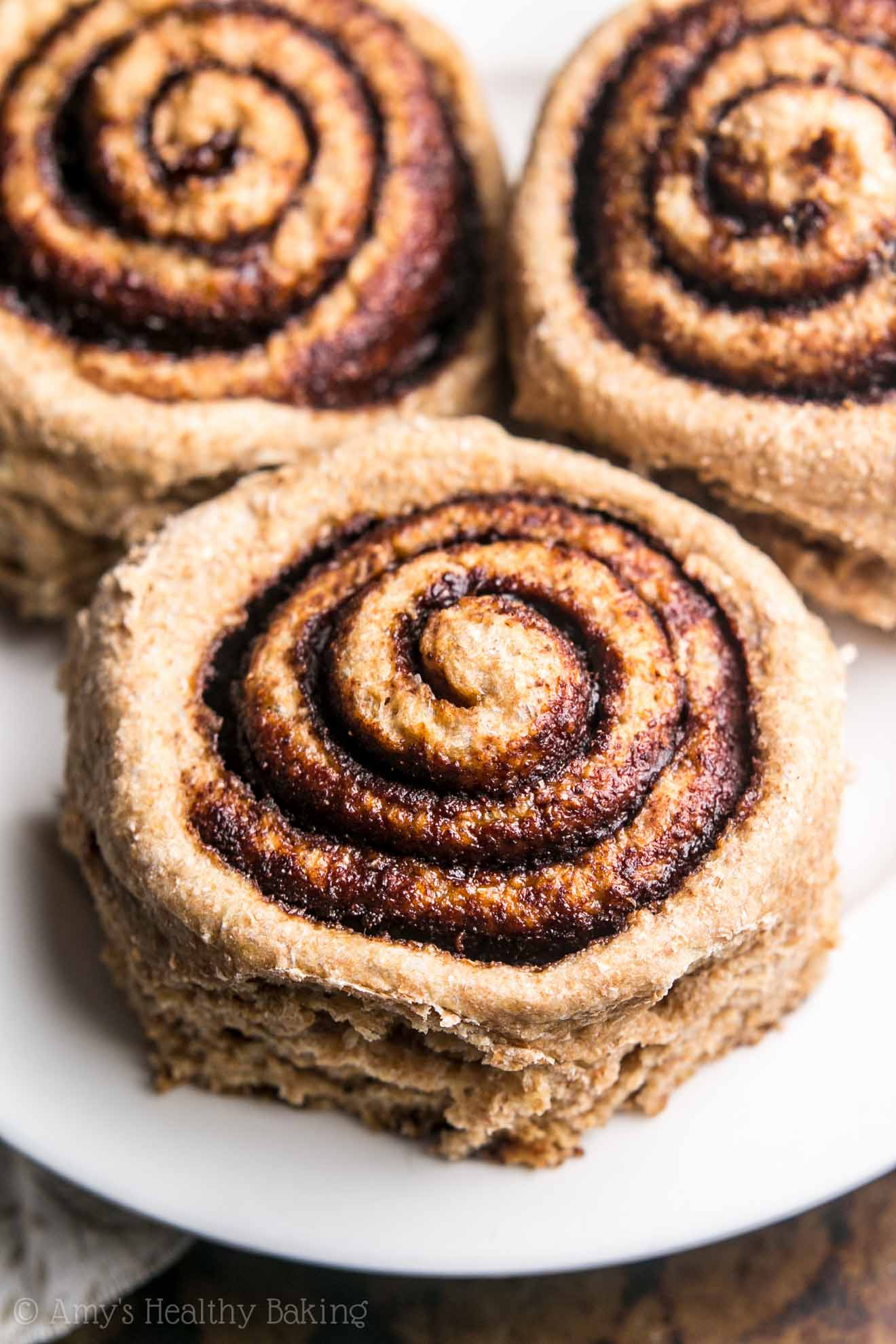 Then in the mornings, before my brother and I woke up, my parents walked over to the boulangerie to buy a few treats for breakfast. They brought back a small multigrain roll for me (always the healthy girl!), along with a few flaky croissants and pains au chocolat (aka the rectangular-shaped chocolate croissants) for themselves and my brother.

On our final day, I finally caved and asked for one of those pain au chocolat. They looked so tempting from where I sat at the kitchen island, watching the rest of my family bite into the soft layers and watch as the golden crumbs fell onto their plates! It was worth every calorie… That rich dark chocolate paired with the flaky pastry = pure bliss!

When I drove by a French bakery during my trip to San Diego last weekend (did you catch any of it on my @AmyBakesHealthy Snapchat?), those memories flooded back, and I couldn’t shake the thought of pain au chocolat out of my head. Since I knew I’d be tempted to eat three in one sitting (can you blame me??), I opted to bake these healthier Healthy Chocolate Cinnamon Rolls at home instead! Their filling tastes just as rich and decadent as that of the pains au chocolat, but they’re 100% whole wheat and just 109 calories!

I call that a chocolate miracle! 😉 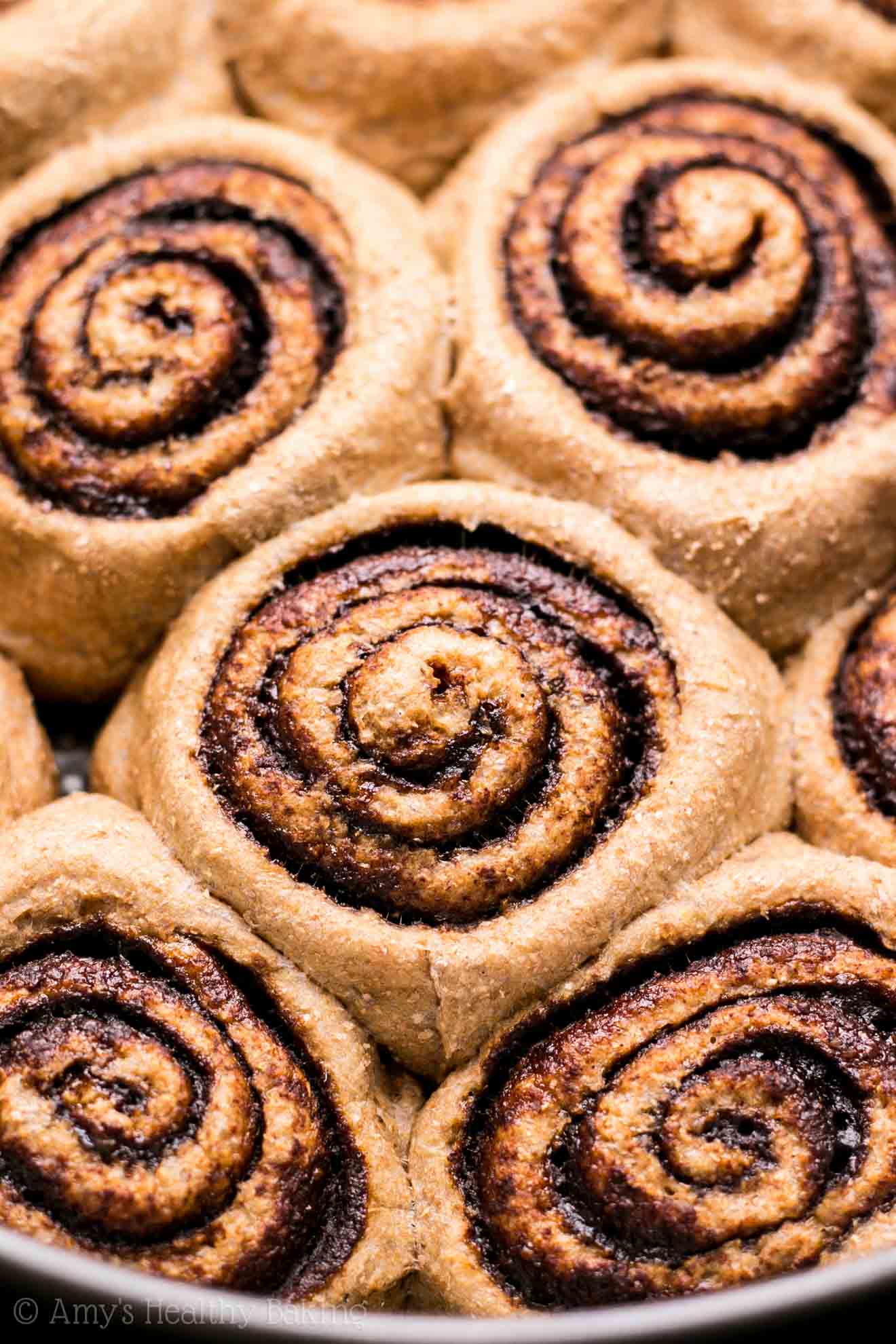 Like I mentioned, these healthy cinnamon rolls are 100% whole wheat. That’s right—you just need regular ol’ whole wheat flour! This is my favorite kind because I can find it in every grocery store, and it rises much better than other brands. When made with my favorite whole wheat flour, my cinnamon rolls always double (if not triple!) in size, whereas other brands barely rise at all. Bonus: It’s very inexpensive too!

Next, you’ll need yeast. I know yeast-based recipes can be intimidating, but don’t be afraid! I have a video here that will walk you through every step so you can see exactly what the dough should look like at each stage of the recipe. This is my all-time favorite yeast! It works like a charm in every single recipe I’ve ever tried, and I highly recommend it. (I usually buy it online!) 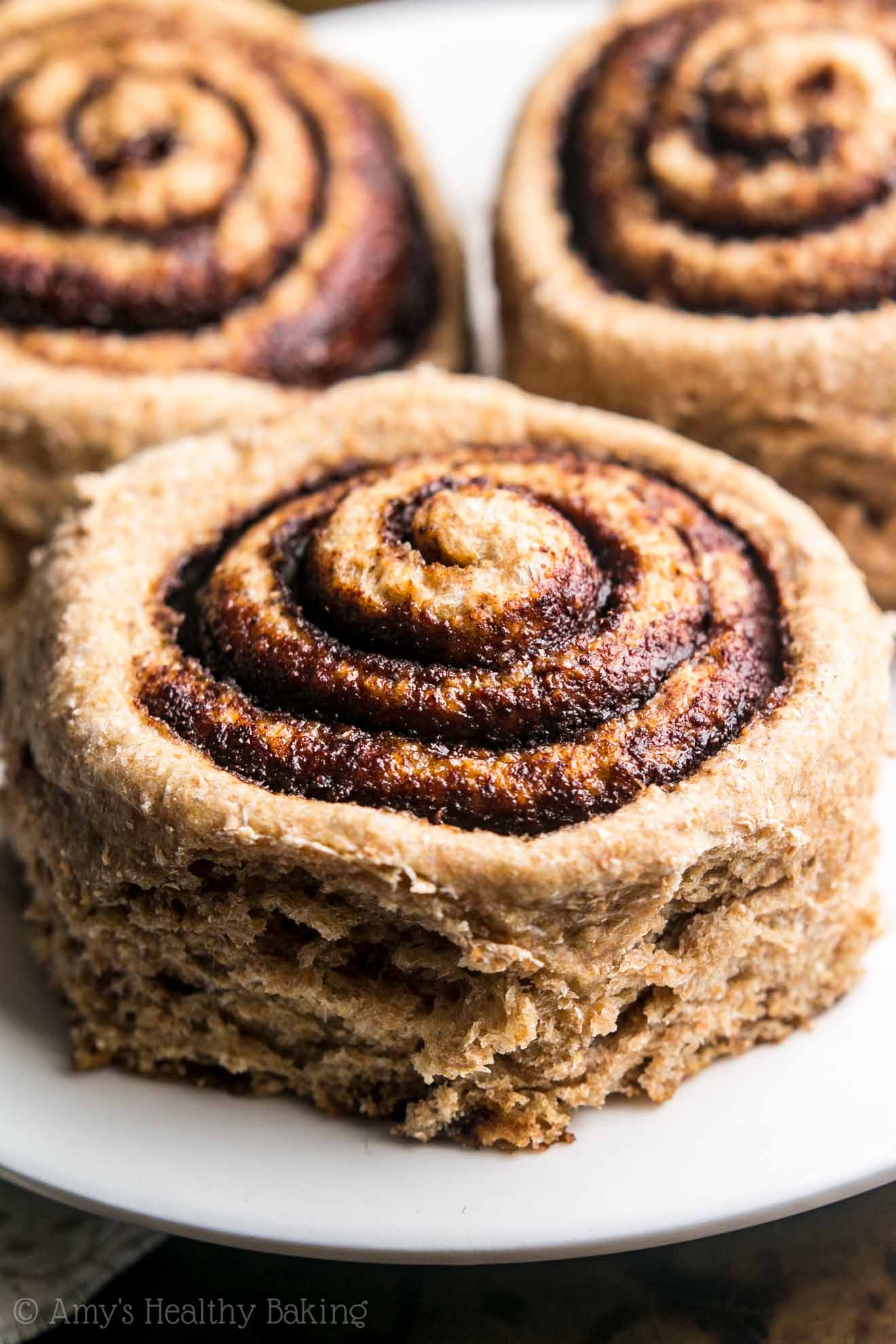 Here comes the most important part… The filling! It’s a combination of coconut sugar, cinnamon, and cocoa powder. Yup, just your stereotypical unsweetened cocoa powder! Because you’ll mix in a full 5 tablespoons, there’s no need for Ductched or special dark cocoa powder. The filling already tastes really rich and dark chocolaty without those latter two types!

Now that you’ve watched that video (you did watch it, didn’t you? here’s the link again, in case you missed it!), you already know my secret to slicing perfect cinnamon rolls… 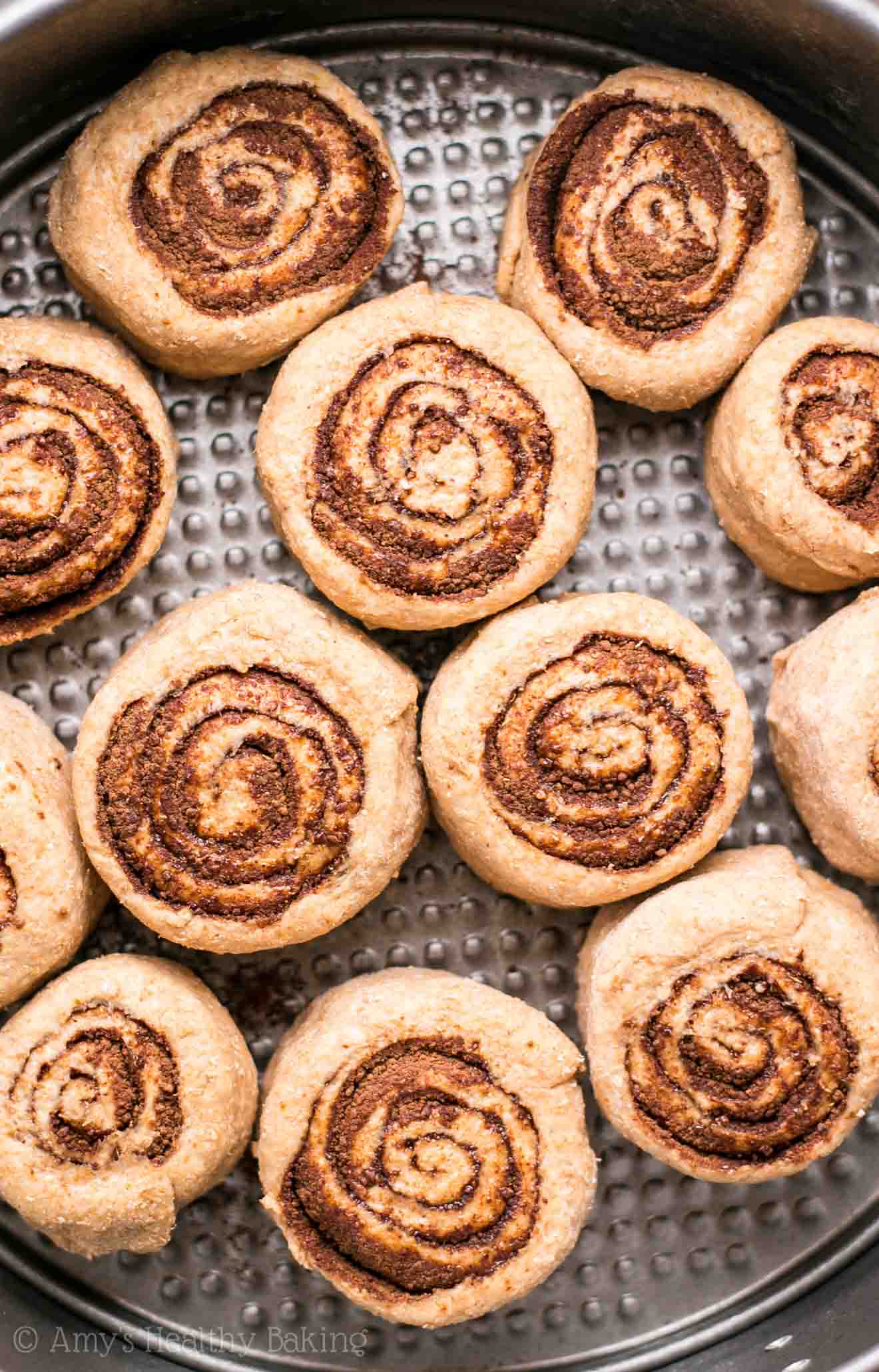 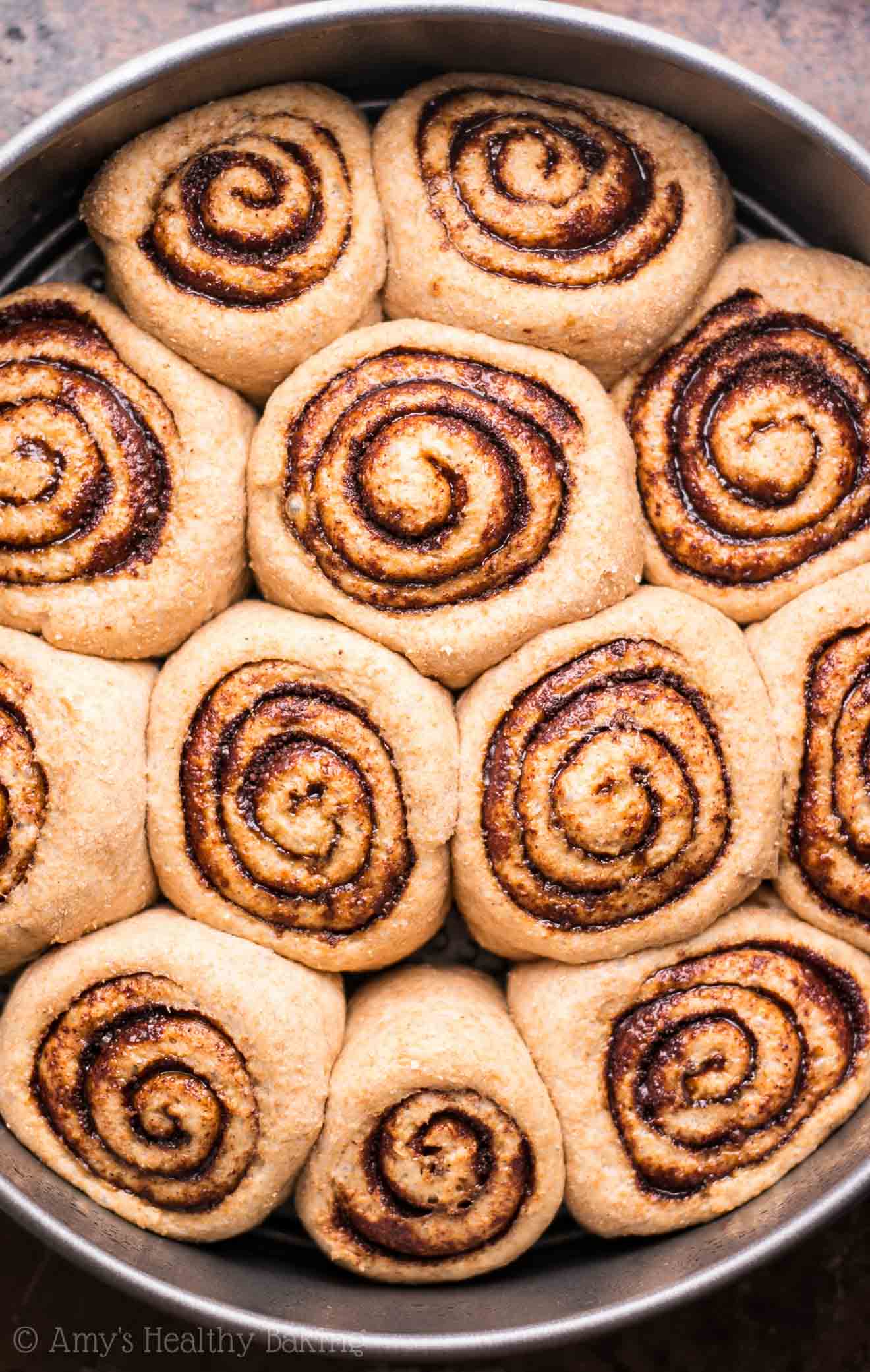 Dental floss! I know it sounds absolutely crazy, but it works so well. It’s the only way I cut my cinnamon rolls and sweet rolls—and it also means you don’t have to wash a knife afterwards too! (The fewer dishes, the better at my house!) And I always use my favorite springform pan to bake them. I love it because its sides are taller than your average cake pan, which means the cinnamon rolls can rise higher, and the removable sides make it so much easier to serve them after they’ve baked!

You’ll let the cinnamon rolls rise in a warm, draft-free place for about 45 minutes. Even now, after I’ve baked hundreds of yeast-based treats, it still looks like magic when I peek under the towel and see how they’ve grown so tall and puffy!

Then preheat the oven, carefully slide in the pan, set a timer, and… 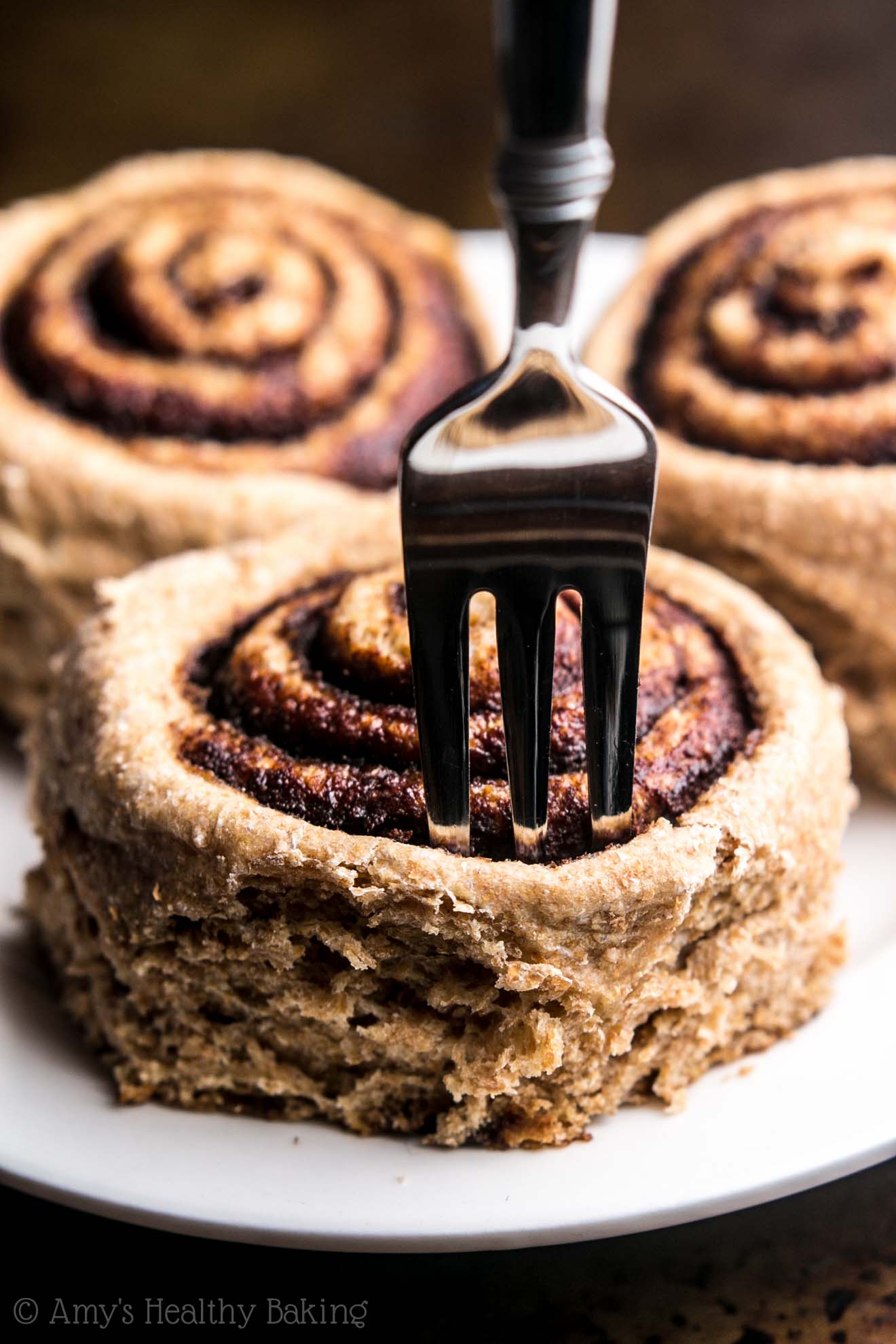 Enjoy! (And try not to eat three in one sitting like me! 😉 )

And when you make your own, remember to snap a picture and share it on Instagram using #amyshealthybaking and tagging @amyshealthybaking IN the photo itself! (That guarantees I’ll see your picture! 🙂 ) I’d love to see your healthy chocolate cinnamon rolls! 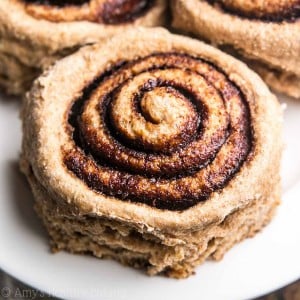 © Amy's Healthy Baking
Yields: 12 cinnamon rolls
The filling in these healthy cinnamon rolls tastes just like the filling of chocolate croissants! They’re soft, tender, and taste really rich. The perfect guilt-free breakfast treat! Leftovers will keep for at least 5 days if stored in an airtight container in the refrigerator.
5 from 6 votes
Print Recipe Pin Recipe

MILK ALTERNATIVES: Any milk may be substituted for the nonfat milk.   YEAST NOTES: For the yeast, I HIGHLY recommend Red Star Quick Rise Yeast. It performs the best out of any yeast I’ve used, so I highly recommend it! It isn’t always easy to find in grocery stores, so I buy mine online here. (Their regular active dry yeast also works equally well!)   WHOLE WHEAT FLOUR NOTES + ALTERNATIVES: For the whole wheat flour, I HIGHLY recommend Gold Medal whole wheat flour. It performs the best out of any brand I’ve tried, and it ensures your cinnamon rolls fully double in size while rising in Step 6. (Other brands of whole wheat flour don’t rise nearly as high, if at all!) It also yields a more tender texture in these cinnamon rolls.   All-purpose flour may be substituted for the whole wheat flour. White whole wheat flour, whole wheat pastry flour, and other brands of whole wheat flour may also be substituted for the Gold Medal whole wheat flour, but your cinnamon rolls may not rise as high as with Gold Medal whole wheat flour or all-purpose flour.   COCONUT SUGAR ALTERNATIVE: Brown sugar may be substituted in place of the coconut sugar. The cinnamon rolls will no longer be "clean eating friendly" with this substitution.   COCOA POWDER NOTES: For the best results, use regular unsweetened cocoa powder. I don't recommend using Dutched or special dark cocoa powder. They have a different acidity level, and they don't taste as rich, strong, or chocolaty as regular unsweetened cocoa powder in this recipe.   CINNAMON NOTE: I highly recommend using Saigon cinnamon. I buy mine online here because it’s so inexpensive and affordable, and it’s the main cinnamon I now use in my baking now. It has a stronger, richer, and sweeter flavor than regular cinnamon, which makes your cinnamon rolls taste even better!   SPRINGFORM PAN NOTE + ALTERNATIVE: I highly recommend using a 9”-round springform pan, like this! Springform pans have taller sides than most traditional cake pans, so this allows your cinnamon rolls to rise properly without touching the top of the towel in Step 6. I also love how the sides are removable for easy serving. A regular 9”-round cake pan may be substituted instead.   STEP 5 NOTE – ROLLING PIN + WORK SURFACE: I absolutely love using my silicone rolling pin and silicone baking mat for rolling out the dough in Step 5! Their nonstick surfaces make the process much easier, and they’re also really easy to clean. (However, even if you use the same silicone tools as I do, make sure you lightly flour your surface and rolling pin first so the dough doesn’t rip or tear!)   GLUTEN FREE NOTE: I have not experienced good luck substituting gluten-free flours or oat flour in this recipe. The cinnamon rolls don’t rise the way they do with wheat-based flour due to the lack of gluten.   EGG FREE, DAIRY FREE + VEGAN OPTION: For a vegan version, substitute your favorite non-dairy milk and stick-style vegan butter (I like Earth Balance) in place of the butter. Coconut oil will also work in place of the butter, but it won’t have quite the same flavor and the yeast will not turn frothy in Step 2.   For more tips on kneading the dough and slicing the cinnamon rolls, watch my video here located directly above the recipe. (It's for my classic cinnamon rolls, but the process of making them is the same!)   {clean eating, egg free, vegan option, dairy free option, low fat, low calorie}
DID YOU MAKE THIS RECIPE?I'd love to hear what you think of it in a comment below! If you take a picture, tag @amyshealthybaking on Instagram or use the hashtag #amyshealthybaking.

The Healthier Chocolate Treats cookbook is perfect for any and all chocolate lovers. Whether you enjoy chocolate occasionally or every single day (that’d be me!), there are plenty of goodies inside for you! Healthier Chocolate Treats contains 50+ brand new healthier recipes. These recipes have never been seen before or appeared on my blog. You won’t find them anywhere else! And yes—every single one contains some form of chocolate. Whether you prefer milk, dark or white, there are lots of treats inside for you!     What Inspired You to Write Healthier Chocolate Treats? I have always loved chocolate. Every Halloween throughout my childhood, I inverted the entire contents of my bright orange jack-o-lantern bucket … END_OF_DOCUMENT_TOKEN_TO_BE_REPLACED