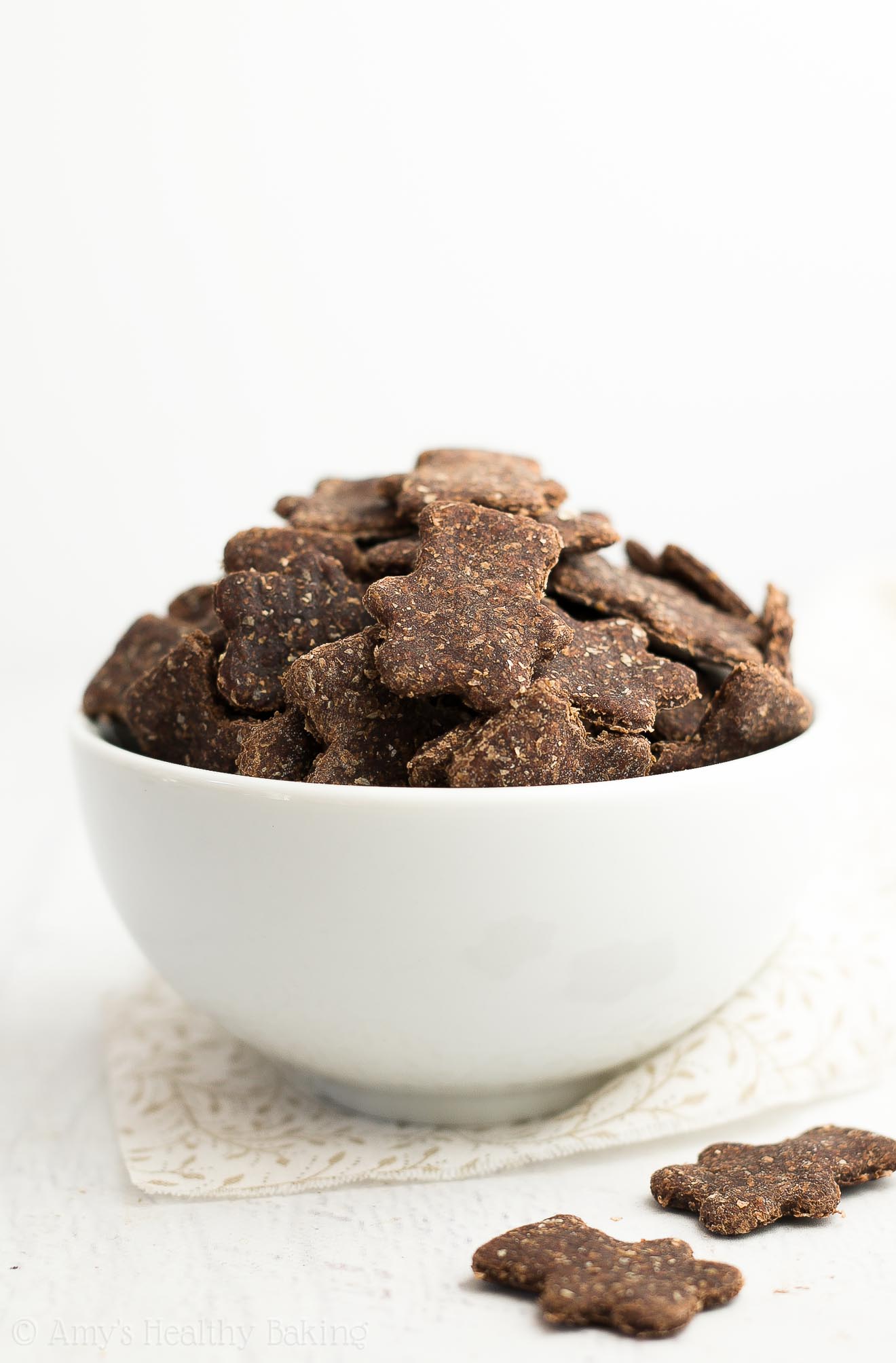 For my freshman year of college, I lived in a three-bedroom suite on the second floor of one of my university’s dormitories with four other girls, sandwiched between two similar suites each housing five boys. During our first quarter, one of my roommates developed a crush on one of those guys, and when we found out his birthday fell shortly after our winter break, she wanted to bake him a cake.

The rest of us girls pitched in to make it feel less awkward for her. We piled into our dorm’s itty bitty communal kitchen, stirring together a store-bought cake mix (it’s the best we could do while living in the dorms without a pantry!) to pop in the oven and topping it with canned vanilla frosting once it cooled. 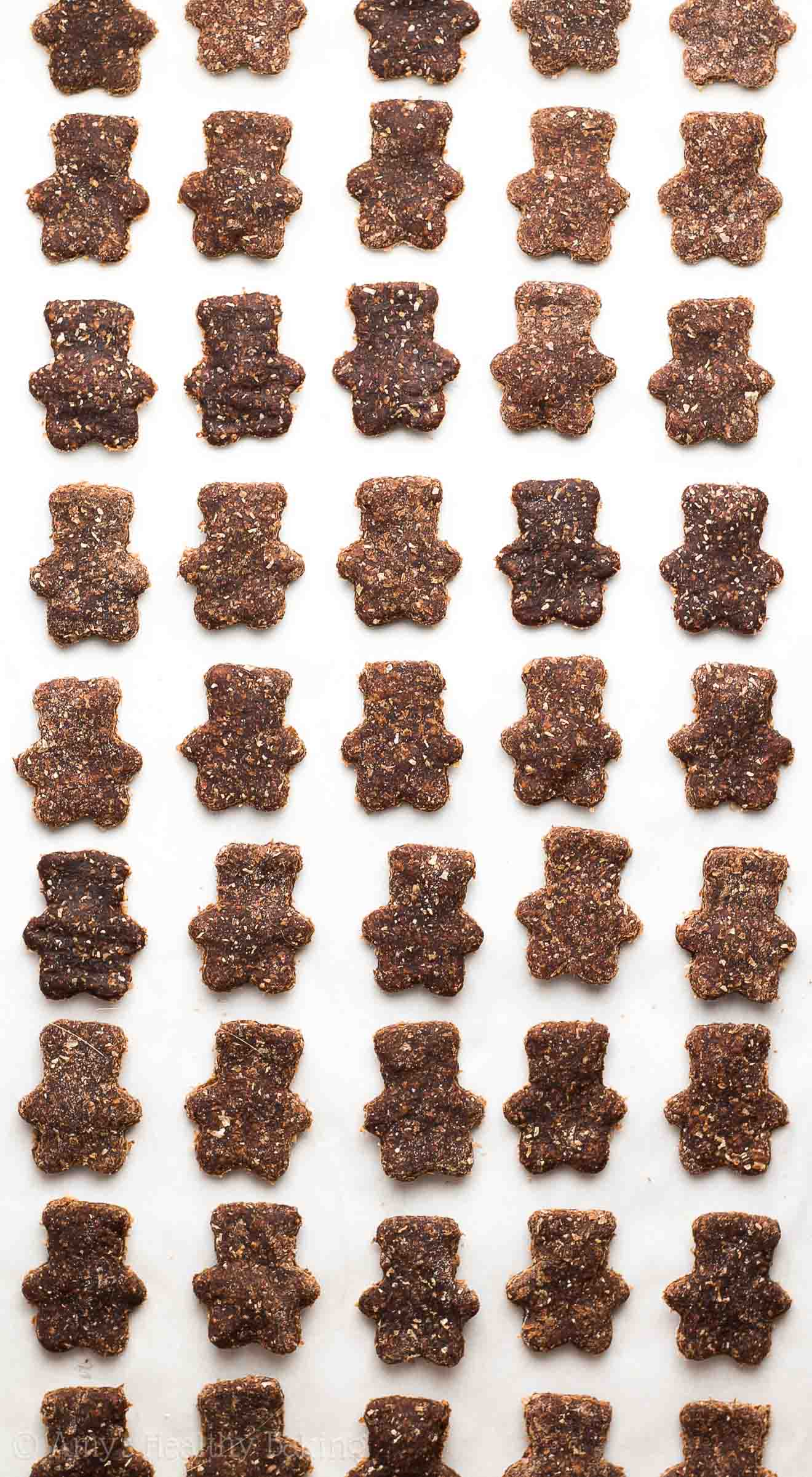 That evening, we knocked on the door of the suite to our left, and when the boy pulled it open to answer, we held out the pan and exclaimed, “Happy birthday!” He looked absolutely shocked, staring down at the sprinkle-topped cake with nineteen candles peeking out of the frosting with his eyes as wide as saucers and his mouth slightly open, but he quickly recovered, smiled, and invited us inside while the rest of the boys wandered out from the bedrooms.

Because we baked a standard 13×9” cake and left it in the pan to deliver (we didn’t own a platter big enough to hold the entire cake!), we only decorated the top and skipped the sides, so we ended up with extra frosting. We placed the can in our mini fridge, knowing it’d last for a while, and figured we’d use it when we baked something else. 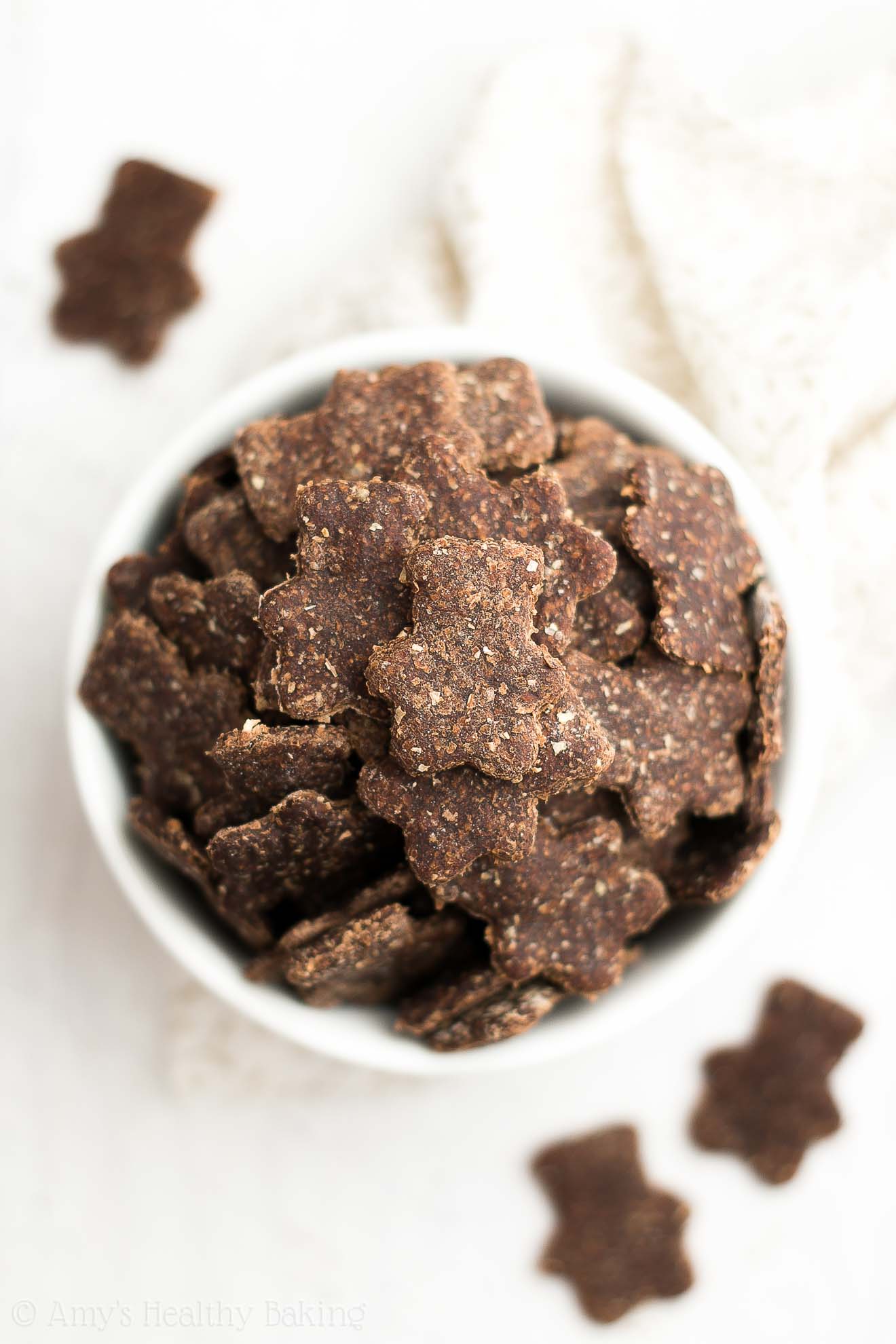 A few days later, we cracked open a fresh box of Teddy Grahams to snack on while studying for midterms. After a few bites, we remembered the vanilla frosting in our fridge and decided to dip the little bears in it for a sweet treat. We quickly fell into a routine, asking each other a few chemistry quiz questions and nibbling on a frosting-topped Teddy Graham as a reward for a correct answer…

And pretty soon, we ran out of frosting!

With our dorm located right around the corner from a pharmacy with a fairly extensive food section, we picked up another can of vanilla frosting and box of Teddy Grahams the next day on our way back from campus, and we fell into the same routine while continuing to study that evening. I absolutely loved that ritual of vanilla-frosted Teddy Grahams—they were the best midterm motivation! 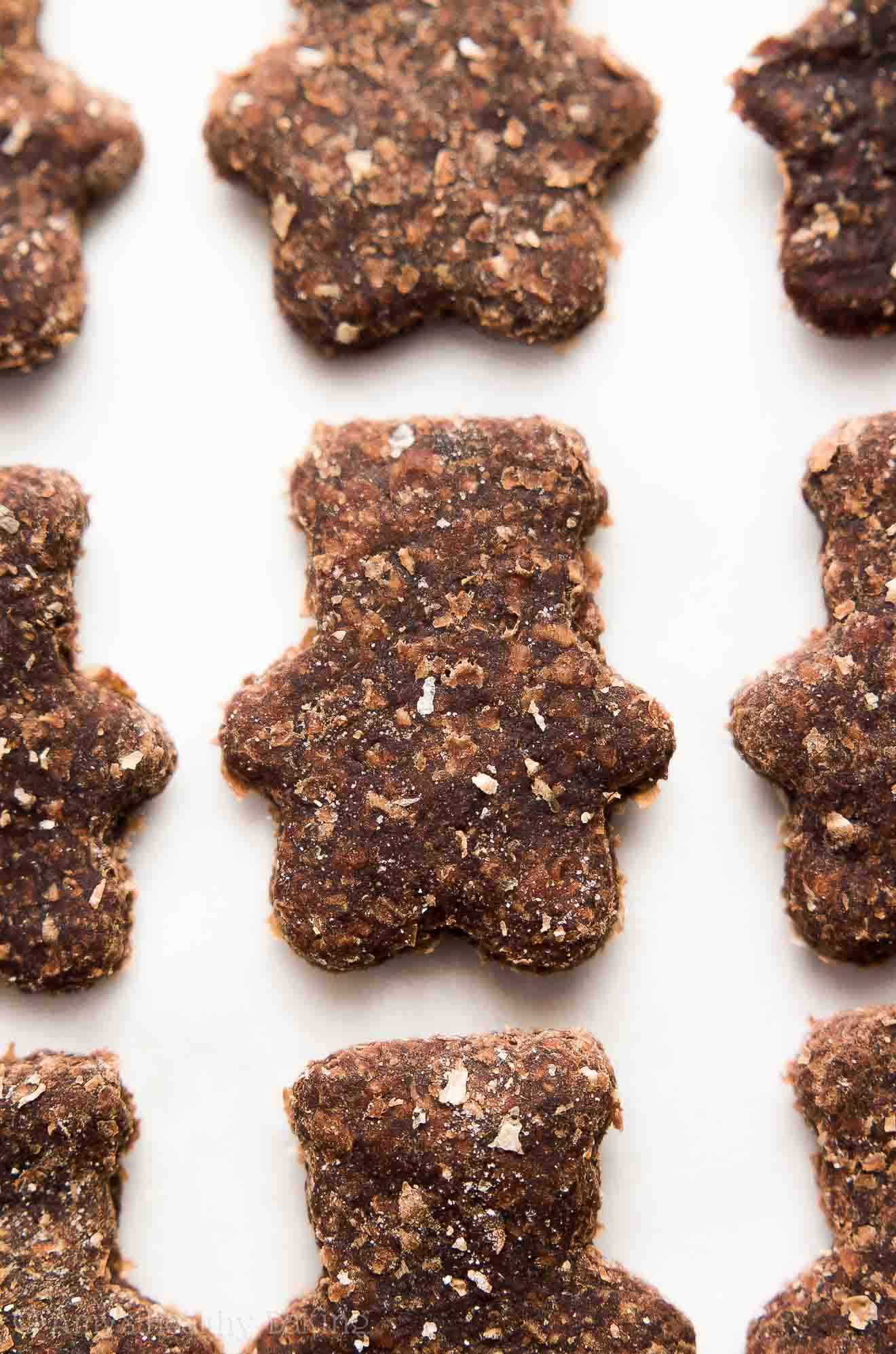 Because school recently started in my hometown, those memories resurfaced multiple times throughout the past few weeks. Although I haven’t consumed much vanilla frosting since my freshman college days and don’t miss it too much, I still started craving those sweet little bears… So I baked these Healthy Homemade Chocolate Teddy Grahams! They taste like the ones sold in grocery stores, but they contain no refined flour, refined sugar, or artificial ingredients!

Which basically means… It’s totally okay to eat as many handfuls as I want, right?? 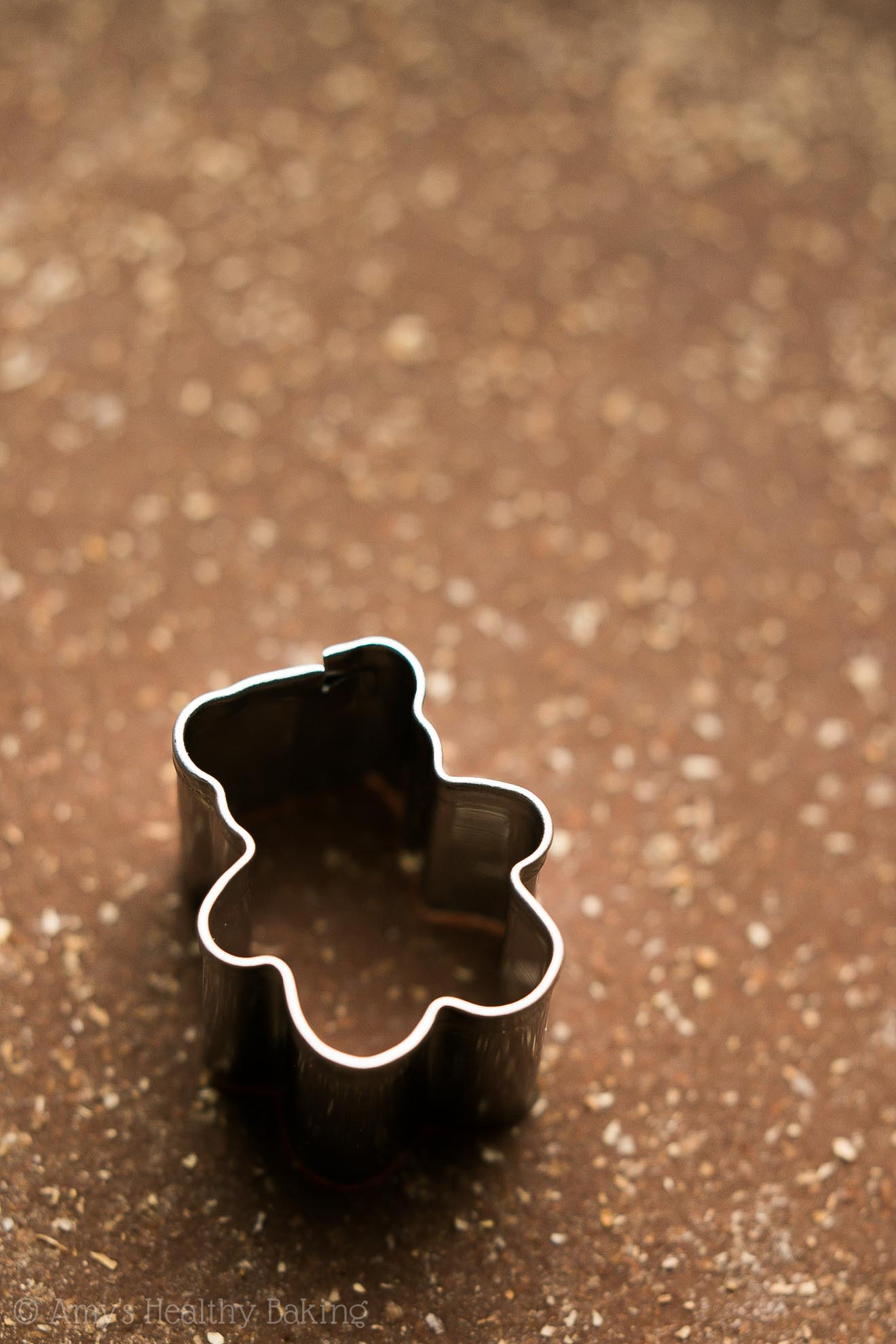 Since not everyone lives in the US and grew up munching on them as after-school snacks like I did, let’s talk about them briefly!

Teddy Grahams are an American product shaped like itty bitty teddy bears about half the size of your thumb, and they come in multiple flavors: honey, cinnamon, chocolate chip, chocolate, and {the newest addition} birthday cake. They’re crunchy with a sweetness level somewhere between animal crackers or graham crackers and cookies, and they’re usually considered a snack food. (At least by the mainstream US population… Seeing as grocery stores stock them on their snack aisles!)

Teddy Grahams (and graham crackers, too!) earned their names because they include graham flour as an ingredient. Graham flour is named after Sylvester Graham, who developed a special method of grinding wheat to turn it into flour. Because graham flour still includes the wheat kernel’s outer bran layer and germ in addition to the endosperm (whereas white all-purpose flour only contains the endosperm), it has lots of health benefits, like extra fiber and nutrients! 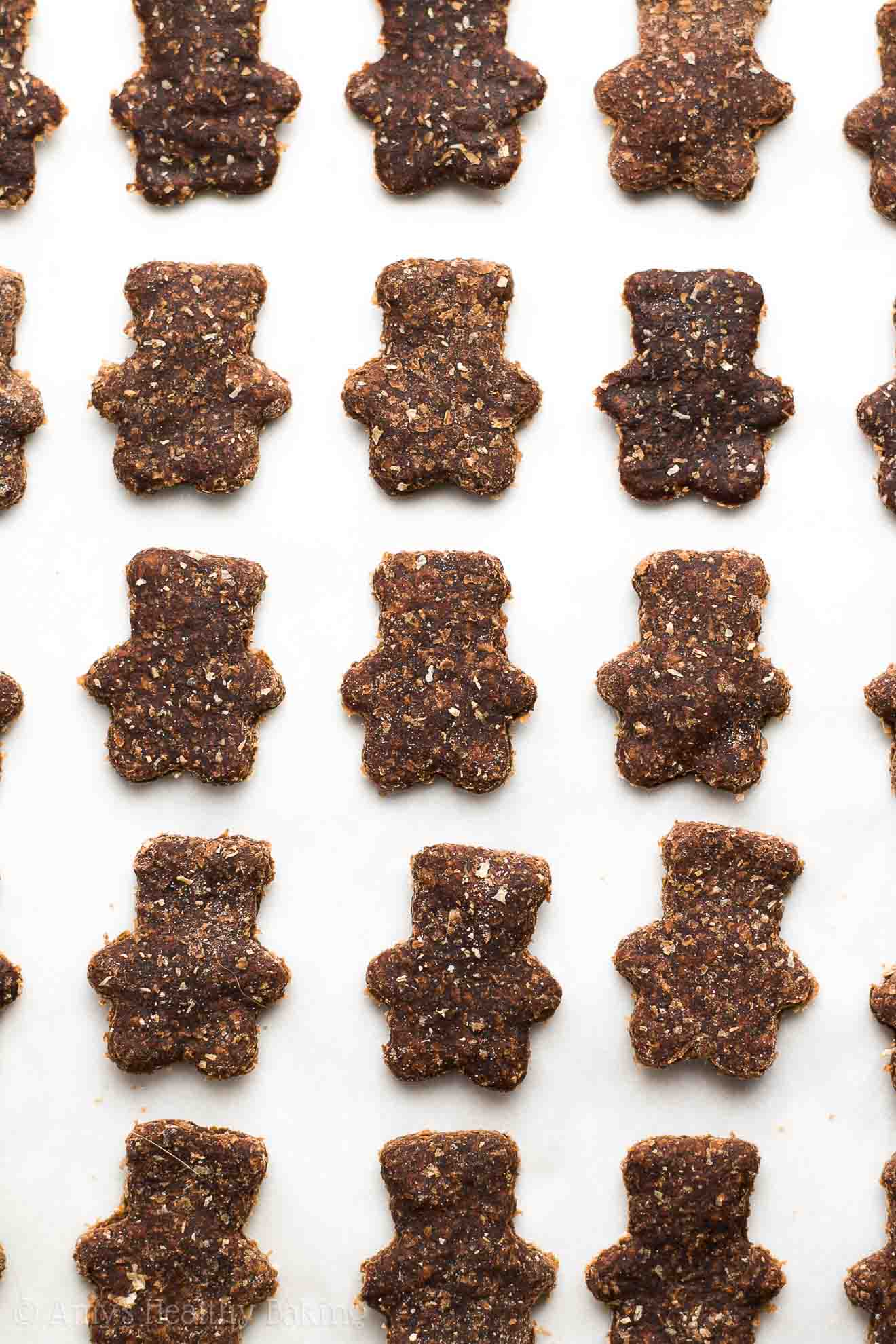 Since most grocery stores don’t stock graham flour, we’re going to use white whole wheat flour in this copycat recipe. It also contains the outer bran, germ, and endosperm, so it has a very similar flavor.

Note: Whole wheat pastry flour would be a great substitute! My taste testers found that homemade Teddy Grahams made with regular whole wheat flour had a more pronounced “wheat-y” flavor that masked some of their sweetness. 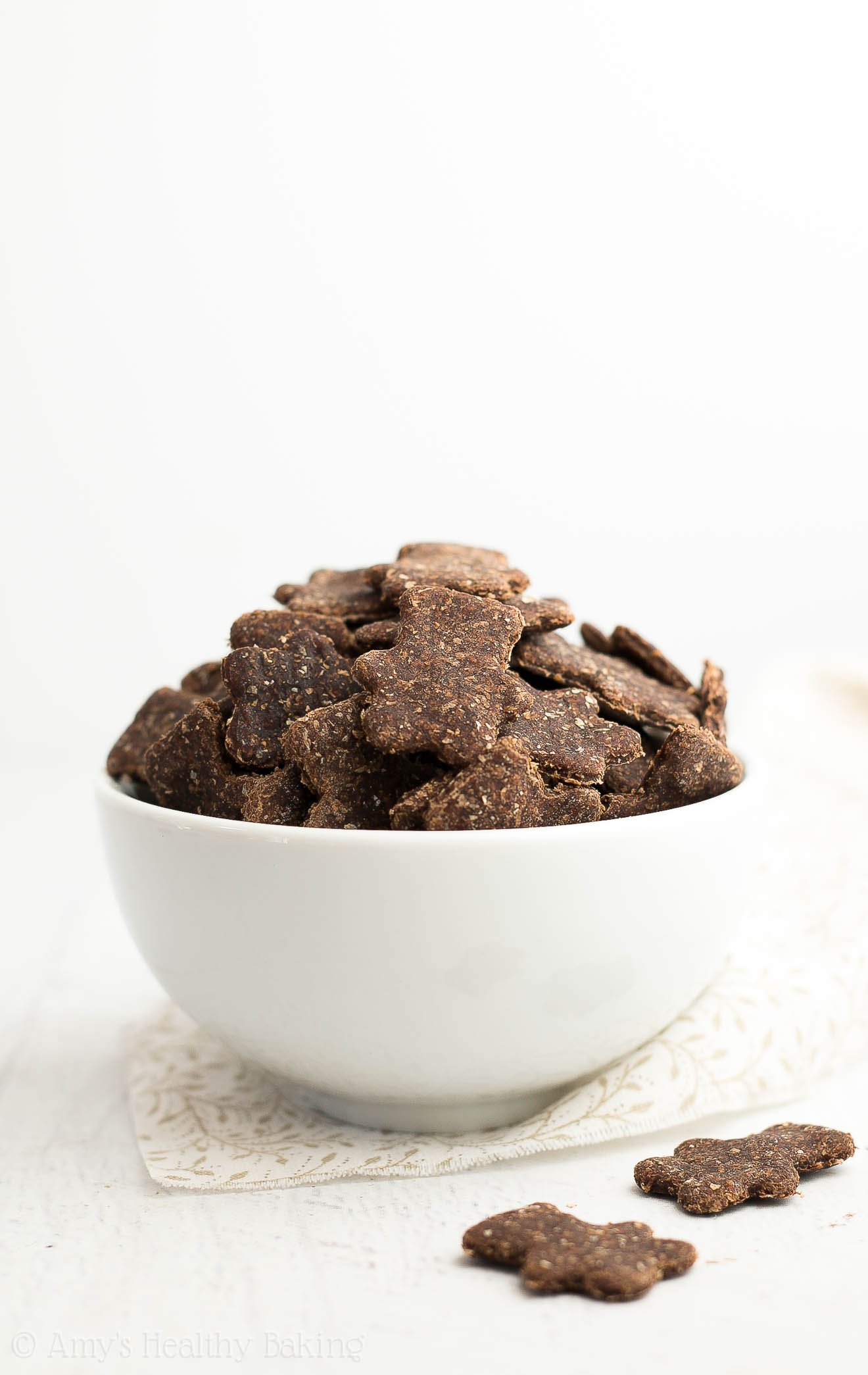 Next, you’ll need unsweetened cocoa powder. That’s right, just regular ol’ cocoa powder! We’re adding enough to the dough to give these cute little bears a rich chocolaty flavor, so no need to use Dutched or special dark cocoa powder. This is the type that I use, and I always keep at least two of the jumbo-sized containers in my pantry. I’m a huge chocoholic (that’s why I published my Healthier Chocolate Treats cookbook!) and go through it really quickly!

Instead of refined sugar, you’ll sweeten your Teddy Grahams with pure maple syrup. Be sure to buy the good stuff! Skip the pancake syrups or sugar-free syrups; those contain corn syrup or artificial ingredients, which we’re avoiding in this healthier recipe. The only ingredient on the label should be “maple syrup.” It’s generally sold in thin glass bottles or squat plastic jugs, and I’ve also bought it in bulk online. 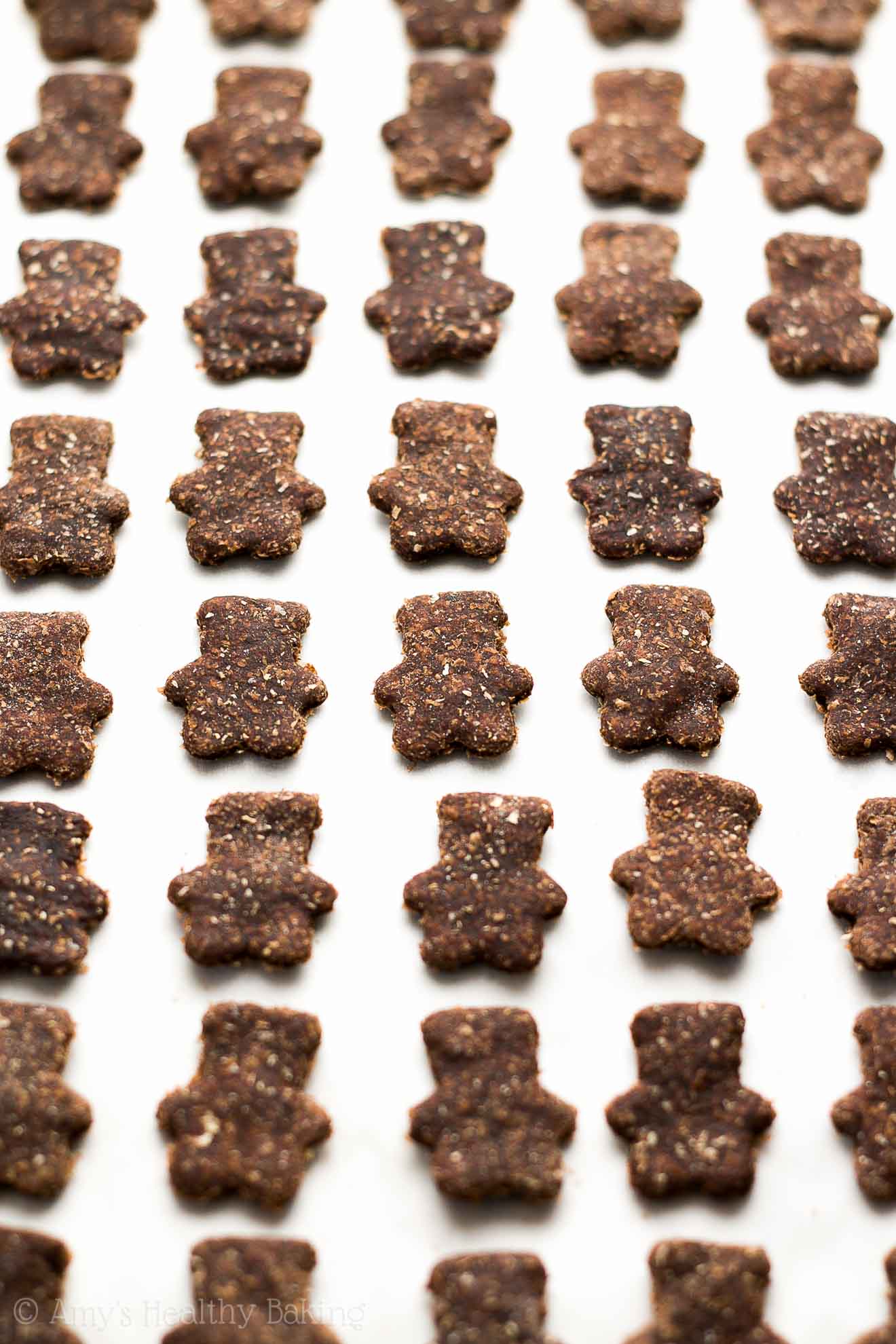 Once you’ve mixed up the dough, it’s time to roll it out and cut it into those adorable bear shapes! I highly recommend using a silicone baking mat and a silicone rolling pin. (← Those are the inexpensive ones that I own {a black color for the rolling pin instead}, and they’re worth every penny!) The silicon material prevents the dough from sticking to both your work surface and your rolling pin, and it makes the whole process go so much faster!

I bought my itty bitty teddy bear cookie cutters online here, and they were so inexpensive. I absolutely love them! I used the middle-sized bear, which was almost exactly the same size as the original Teddy Grahams. (It yielded a lot more bears from the dough than I expected, too!)

Then transfer those little cut-outs to a fresh baking sheet, pop them in the oven, and… 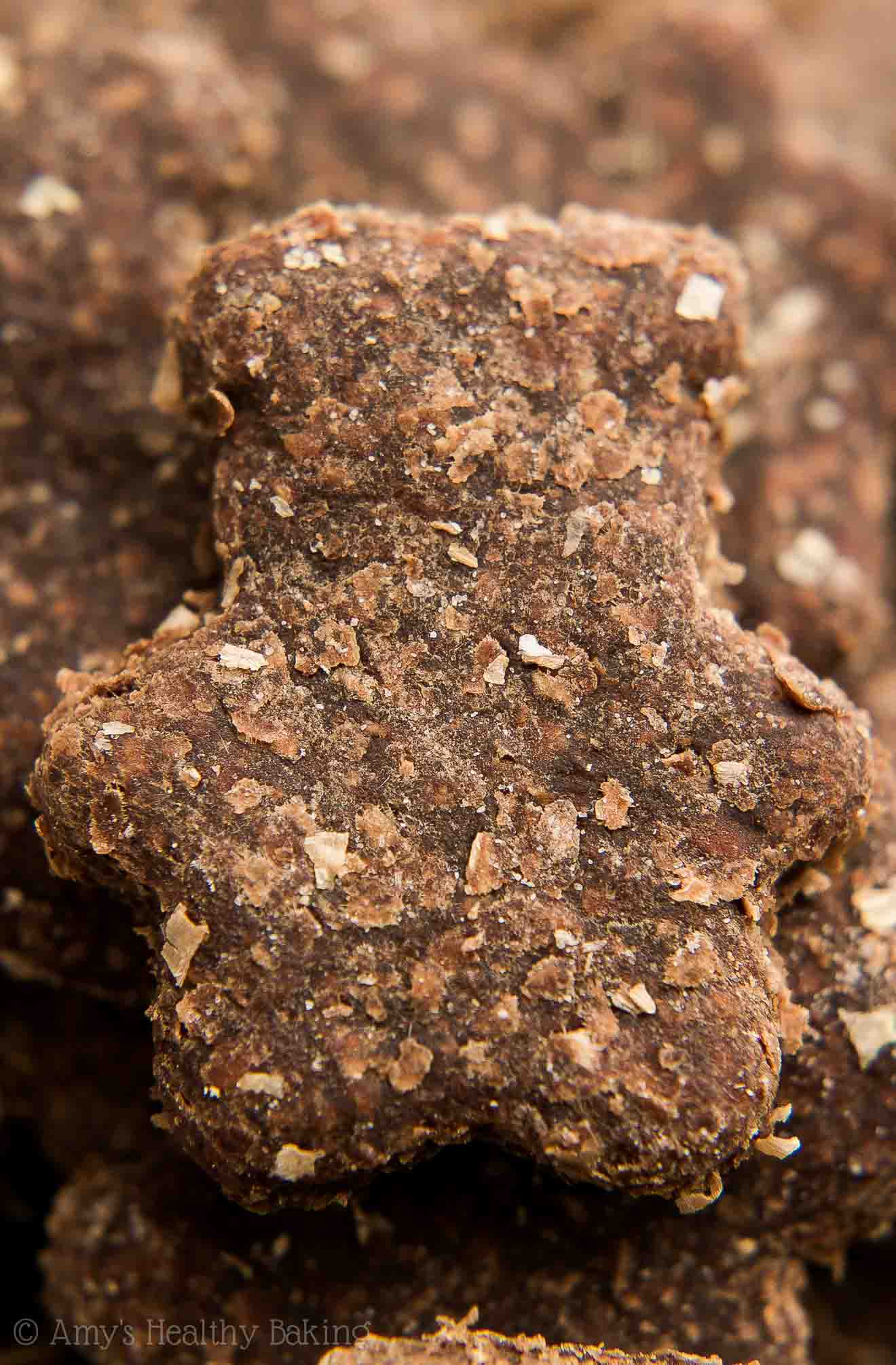 Enjoy! And when you make your own, remember to snap a picture and share it on Instagram using #amyshealthybaking and tagging @amyshealthybaking IN the photo itself! (That guarantees that I’ll see your picture! ?) I’d love to see your copycat Teddy Grahams and feature them in my Sunday Spotlight series!

Click here to PIN the recipe and save it for later!
Yields: 5 servings
These cute bear-shaped chocolaty snack crackers are absolutely irresistible! They’re crunchy and lightly sweetened with the perfect amount of chocolaty flavor. They’ll keep for at least one week (if not longer!) if stored in an airtight container. This recipe is easily doubled to serve more, too!
Notes: For the gluten-free flour, I recommend the following: ½ cup (60g) millet flour, 2 tablespoons (15g) tapioca starch, 2 tablespoons (15g) brown rice flour, and ¼ teaspoon xanthan gum. Most store-bought gluten-free blends should also work, if measured like this.

It’s very important to measure both the flour and the cocoa powder correctly, as outlined in the links above. Too much of either will dry out the dough. If the dough won’t come together after a few minutes of stirring and working in the ingredients, add additional water ½ teaspoon at a time until all of the dry ingredients are incorporated.

I highly recommend using a silicone baking mat and a silicone rolling pin. (← Those are the inexpensive ones that I own {just the rolling pin in black}, and they’re worth every penny!) The silicone material prevents the dough from sticking to both your work surface and your rolling pin, and it makes the whole process go so much faster! Instead, you may use any clean surface for rolling and a regular wooden rolling pin, but you'll need to use a lot more flour to ensure the dough doesn't stick to either.

I bought my itty bitty teddy bear cookie cutters online here, and I absolutely love them! I used the middle-sized bear, which was almost exactly the same size as the original Teddy Grahams.

If you prefer, you may slice the dough into squares instead after rolling it out. The squares generally take longer to bake. This is because the bear cut-outs sit on the countertop for a longer period of time while you punch out the rest, so the dough begins to dry out a bit. (That’s perfectly fine! It just means they don’t bake as long in the oven.)

The leftover dough may be recombined and rolled out to cut out more bears. If it’s too dry to stick together, moisten your hands with a little water before kneading it back together.

The Healthier Chocolate Treats cookbook is perfect for any and all chocolate lovers. Whether you enjoy chocolate occasionally or every single day (that’d be me!), there are plenty of goodies inside for you! Healthier Chocolate Treats contains 50+ brand new healthier recipes. These recipes have never been seen before or appeared on my blog. You won’t find them anywhere else! And yes—every single one contains some form of chocolate. Whether you prefer milk, dark or white, there are lots of treats inside for you!     What Inspired You to Write Healthier Chocolate Treats? I have always loved chocolate. Every Halloween throughout my childhood, I inverted the entire contents of my bright orange jack-o-lantern bucket … END_OF_DOCUMENT_TOKEN_TO_BE_REPLACED