JUMP TO RECIPE
Learn how to make these amazing crunchy homemade cinnamon graham crackers from scratch! You just need 1 bowl and 4 ingredients (plus salt and water!). They’re lightly sweetened and full of cozy cinnamon flavor… But no butter, eggs, dairy, refined flour or sugar! And each serving is 100 calories! 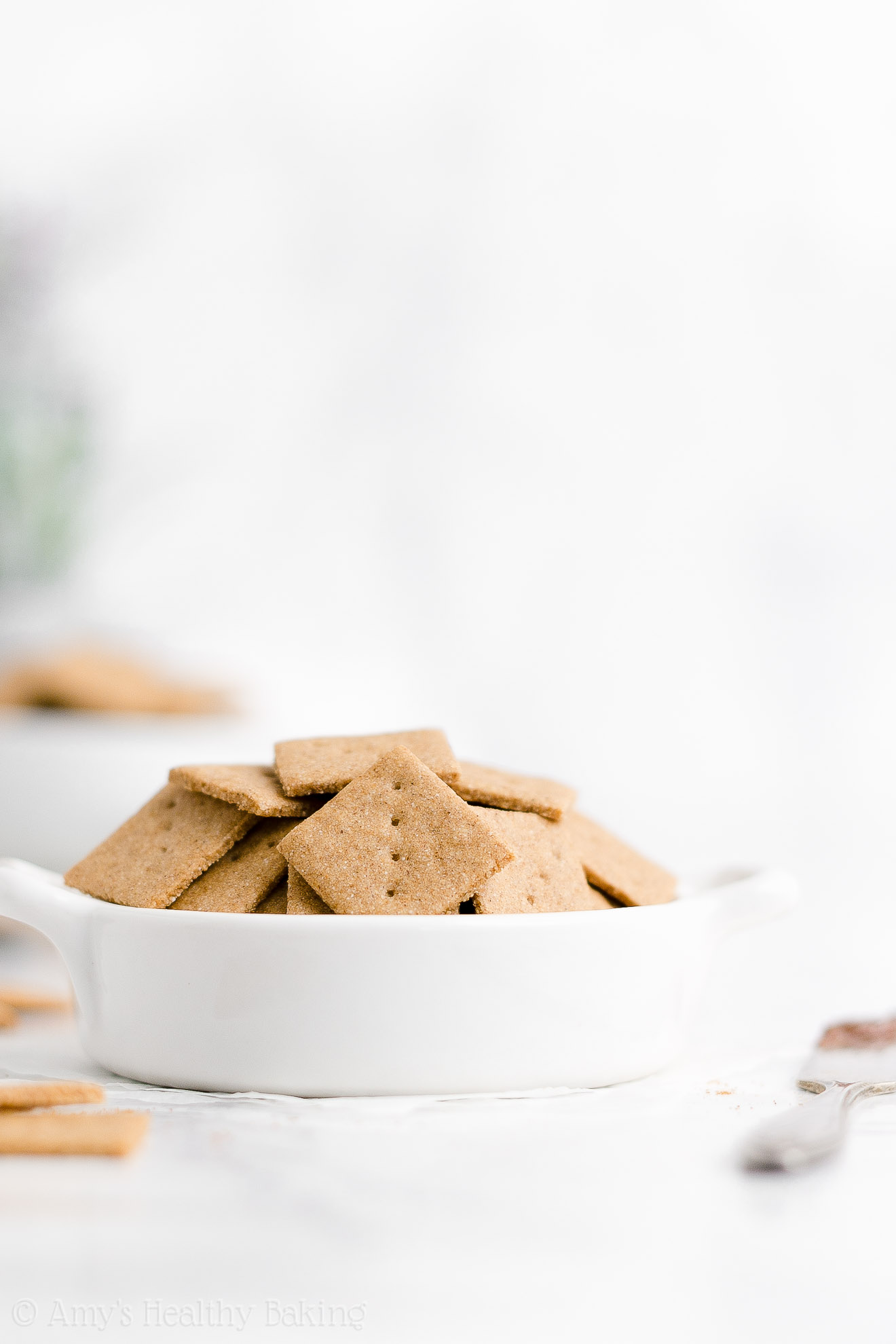 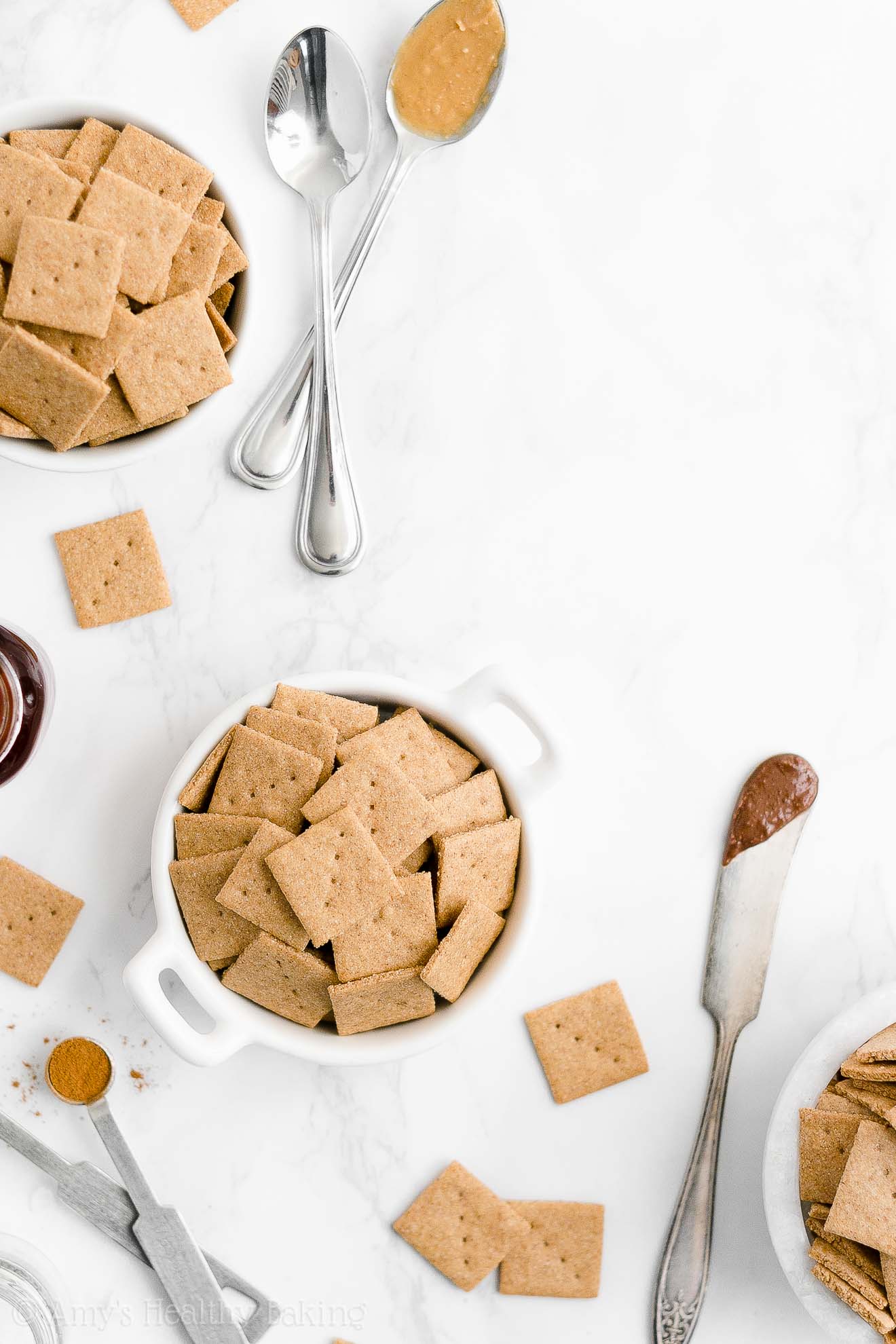 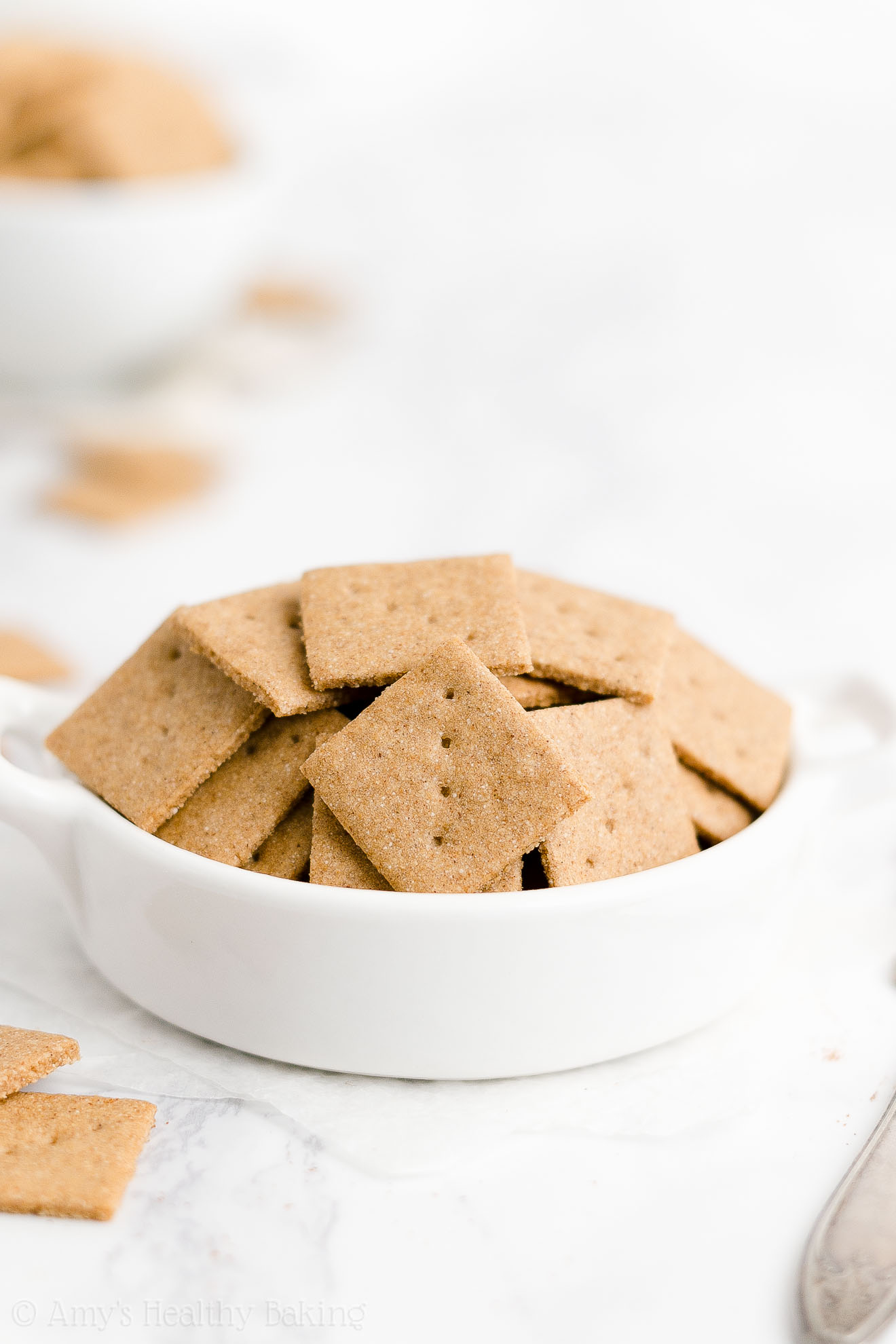 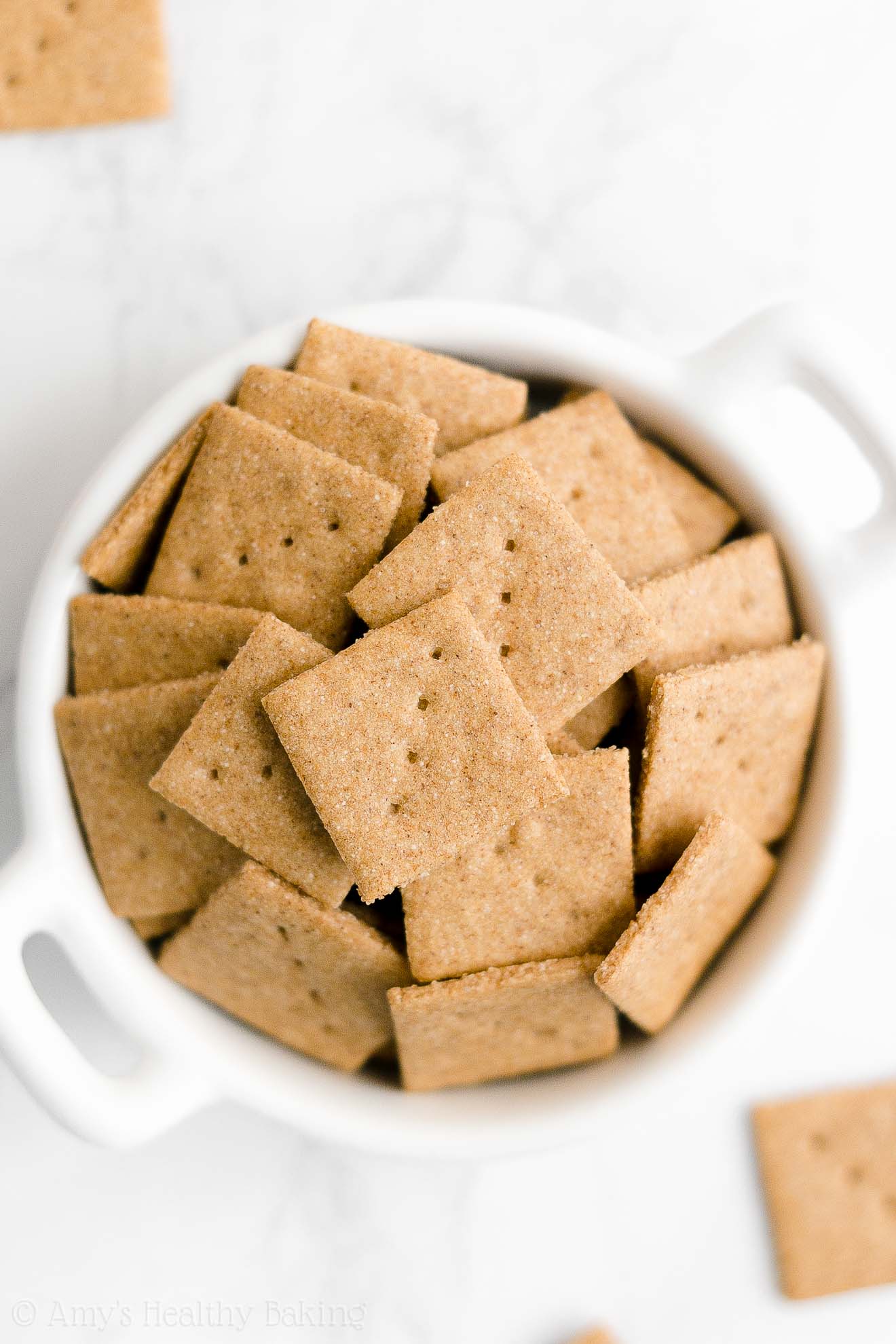 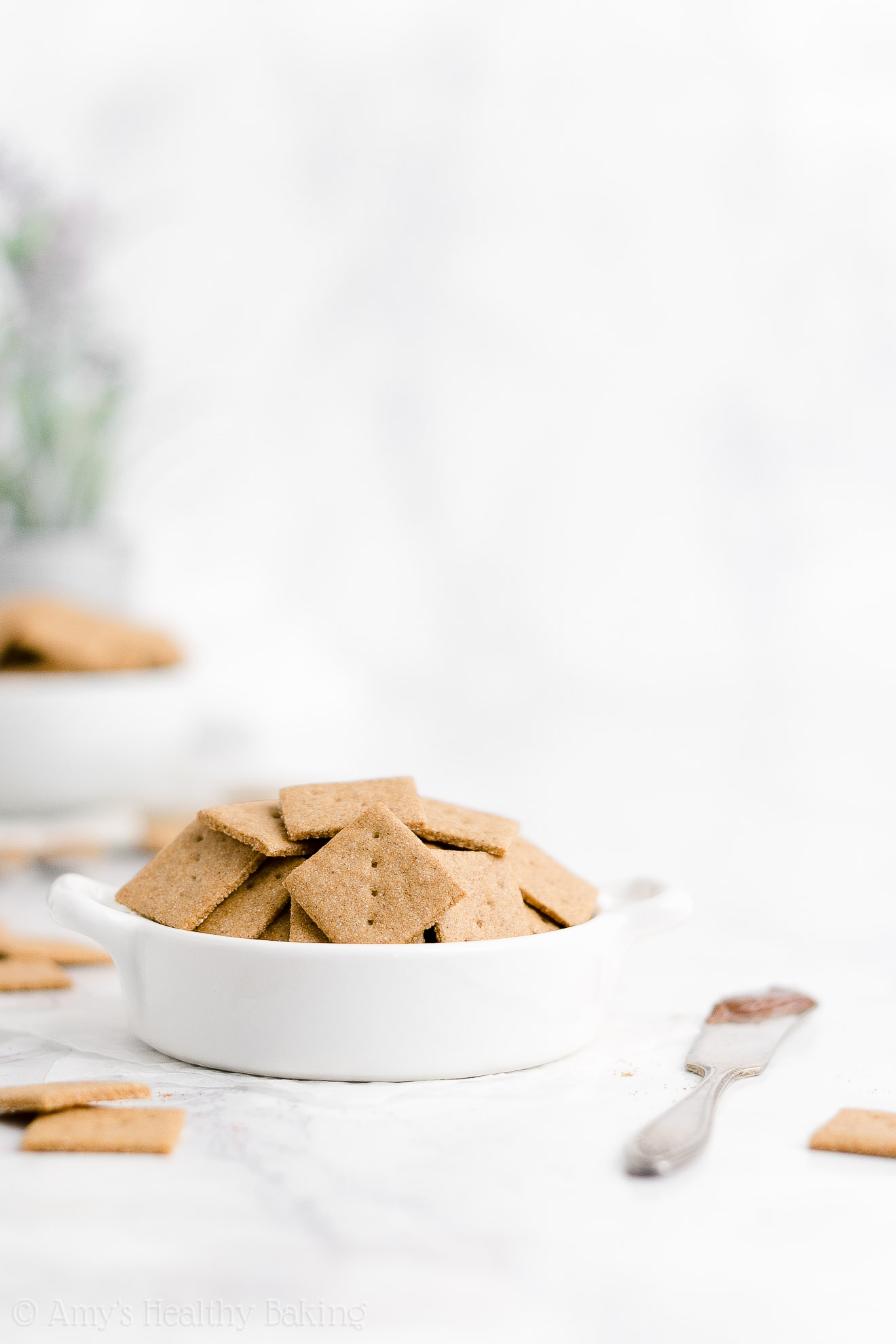 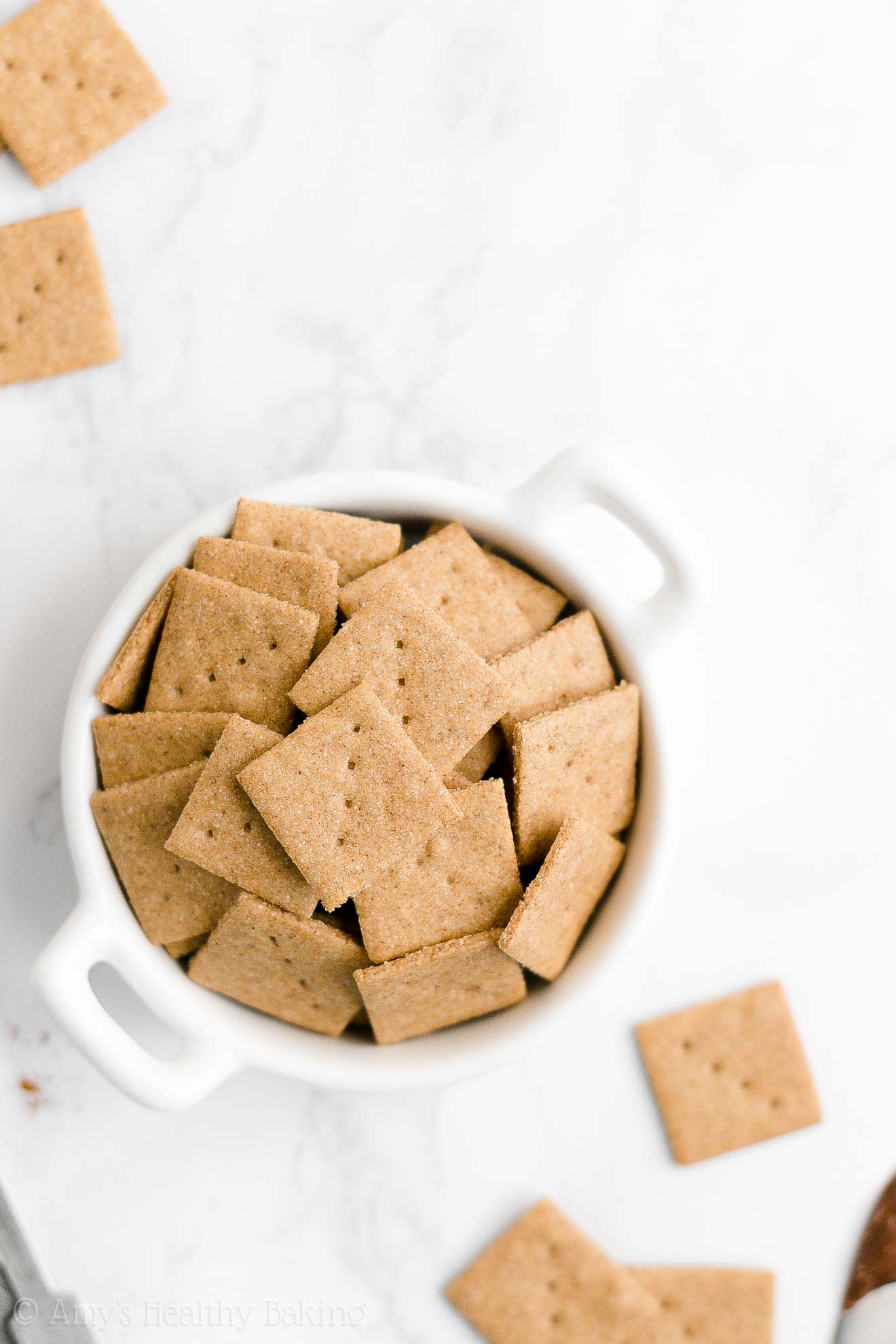 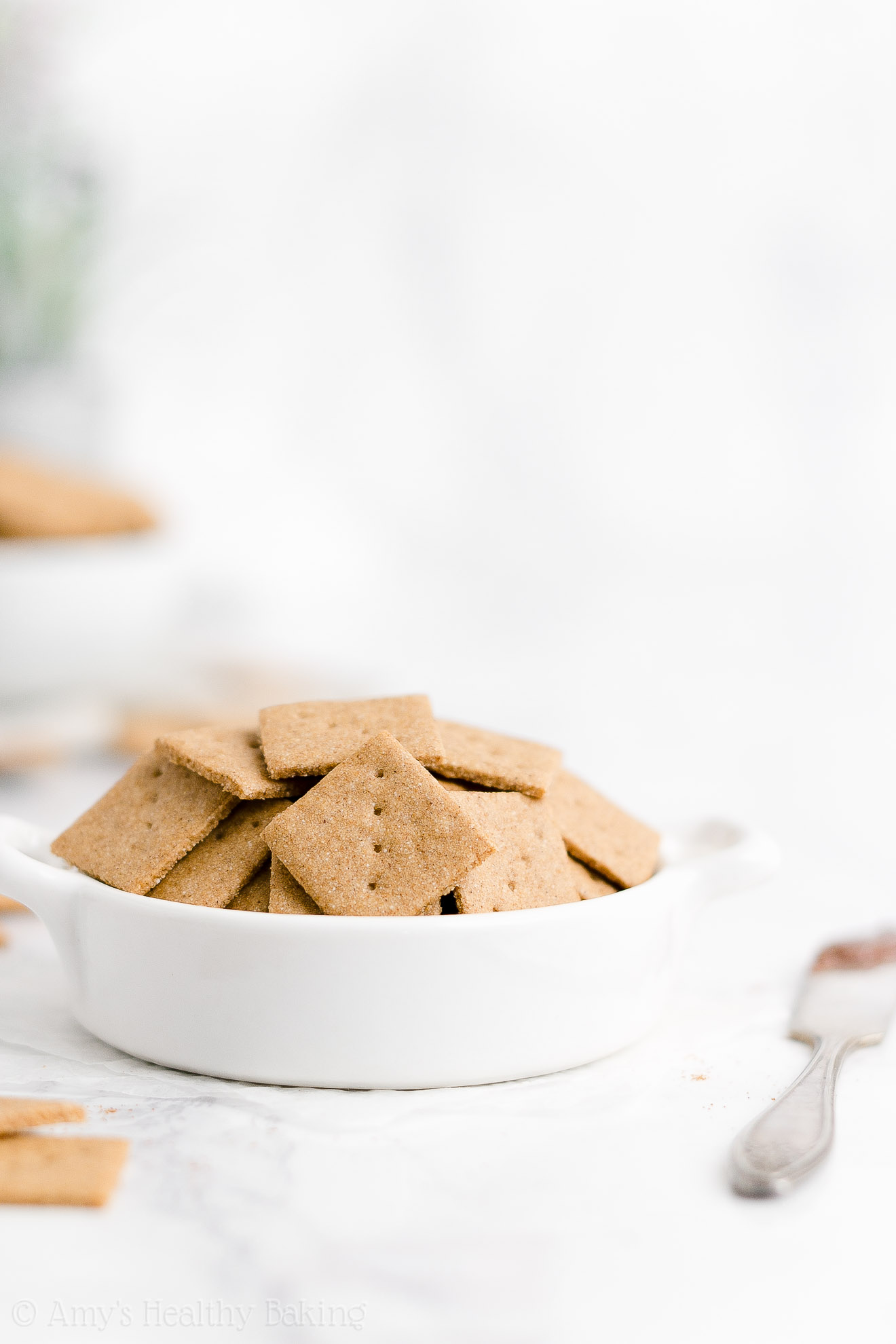 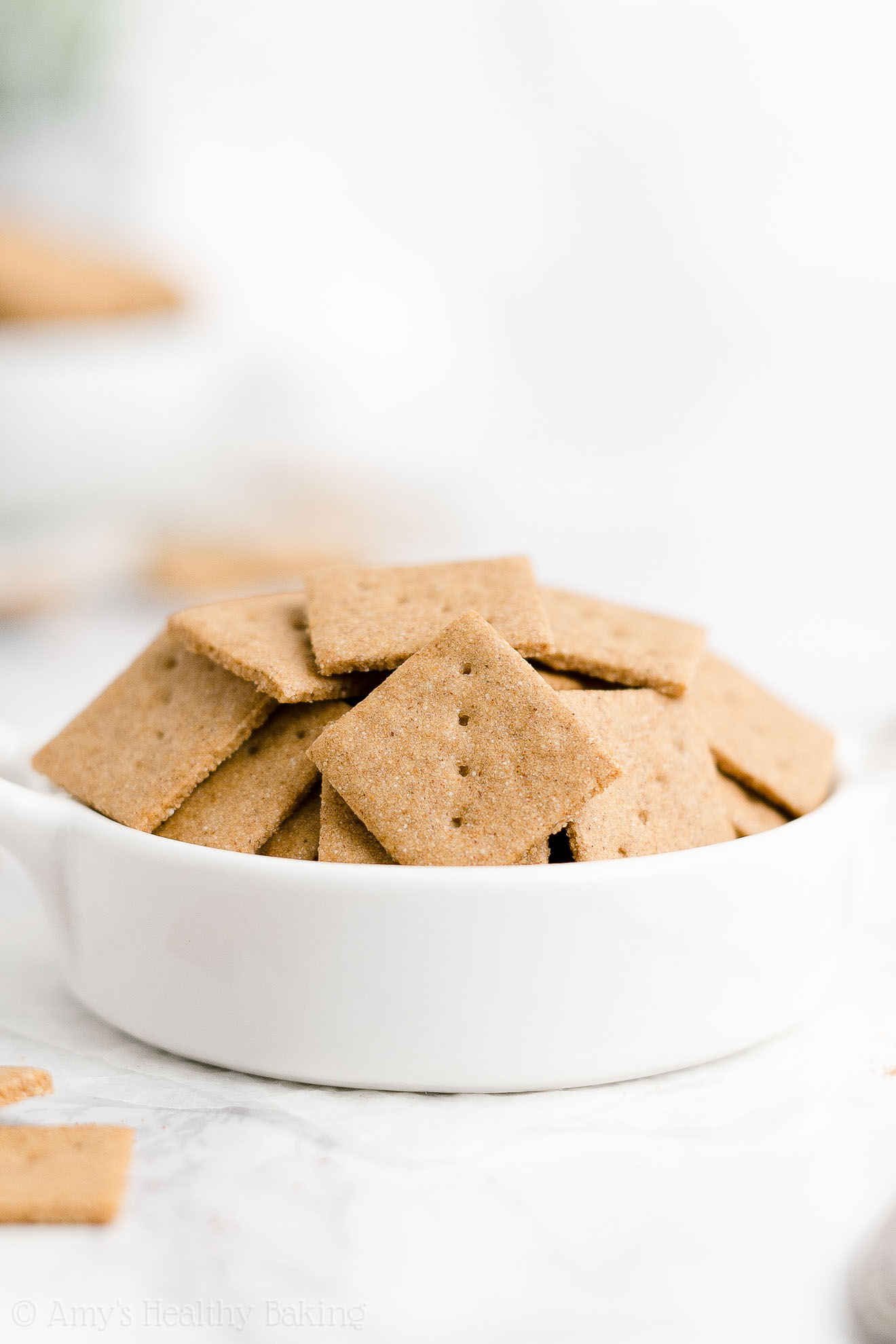 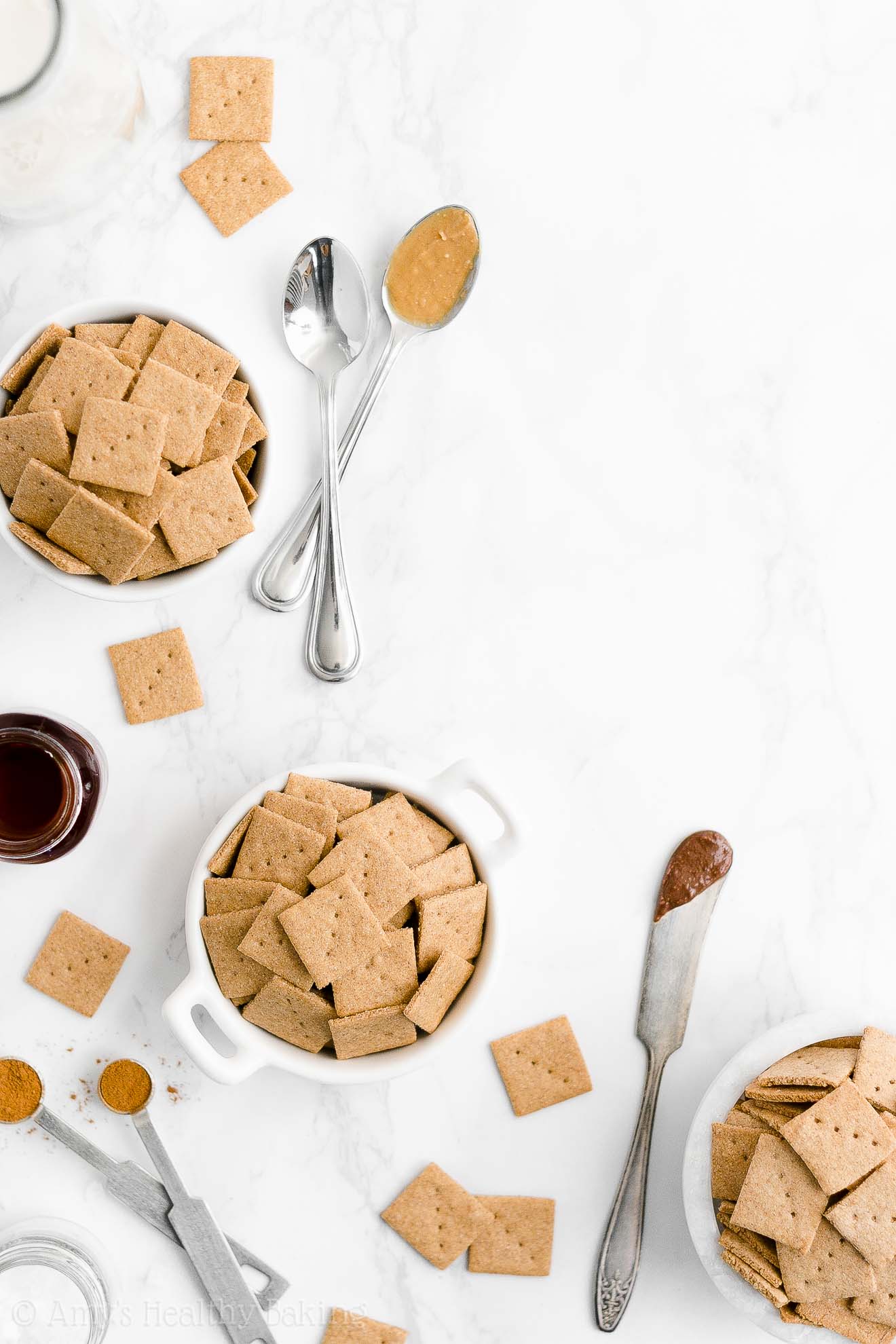 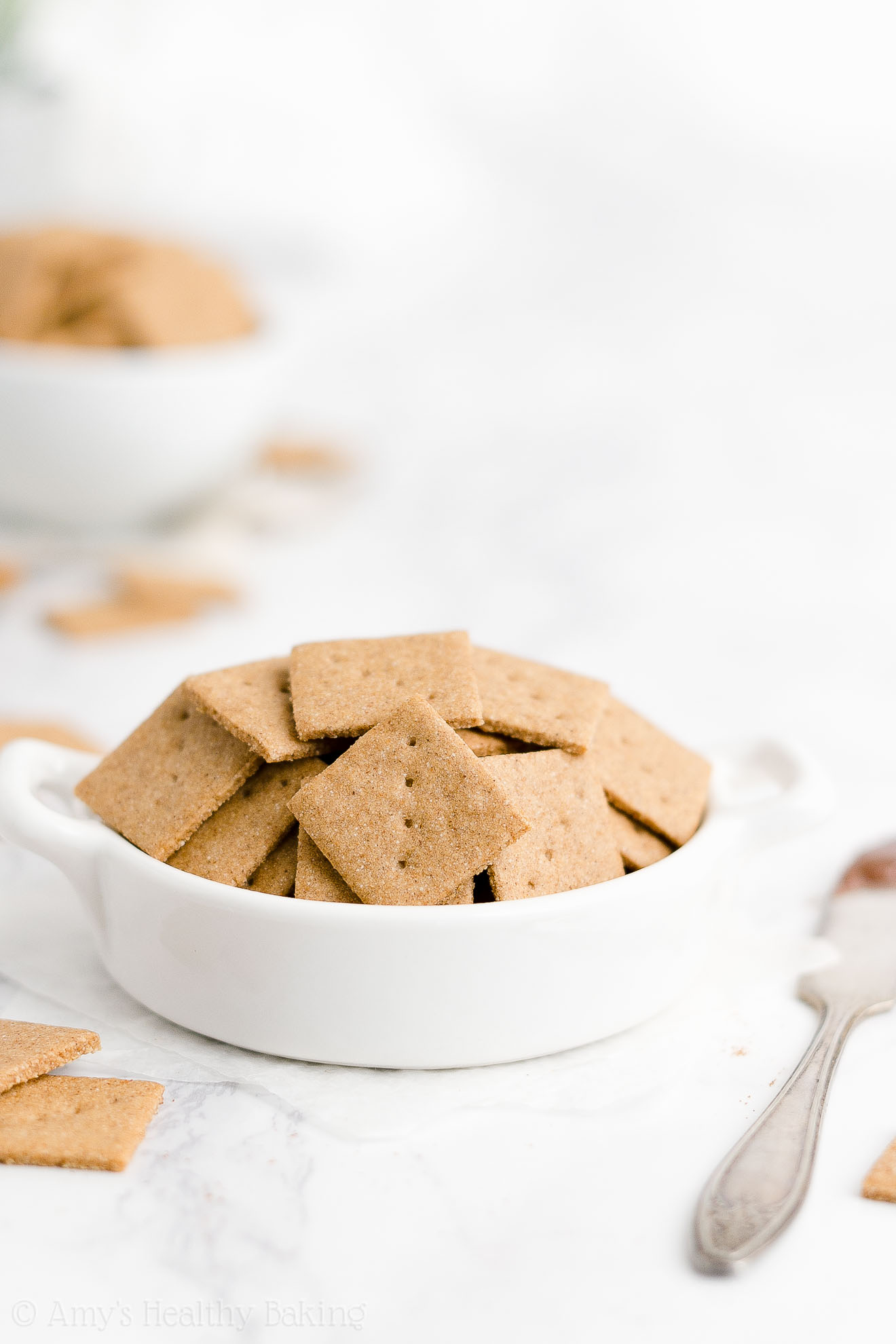 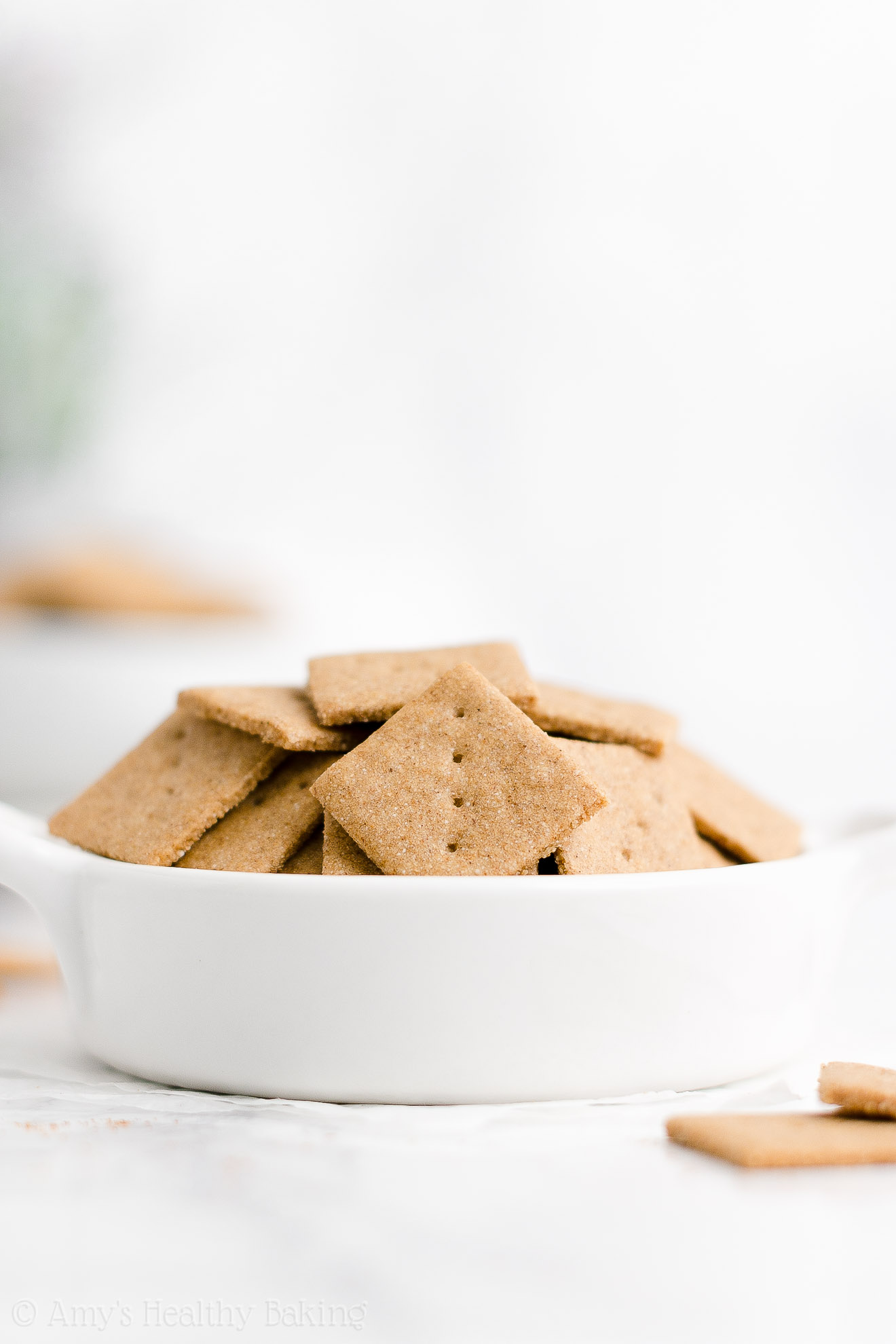 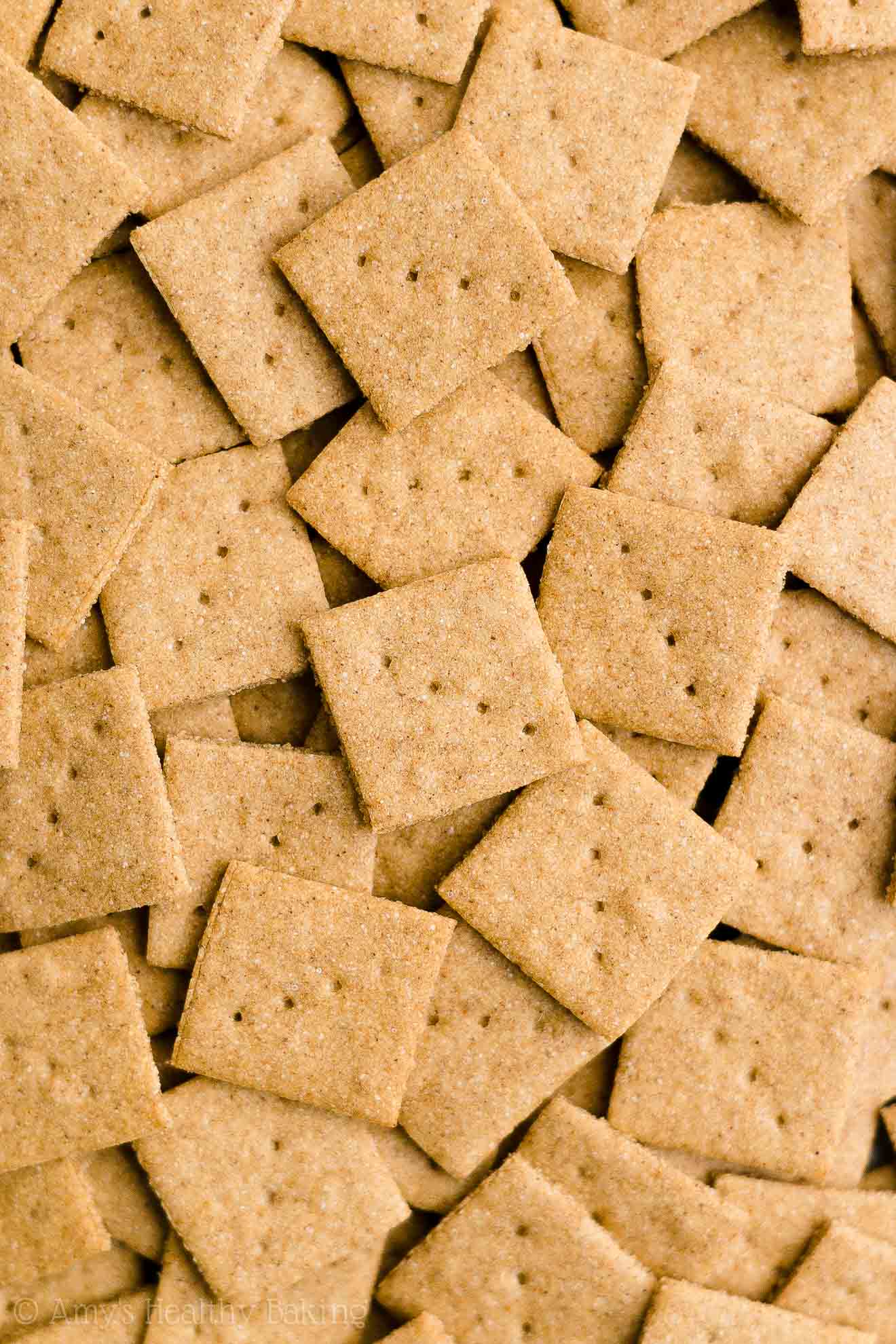 Enjoy your deliciously crunchy snack crackers! And when you make your own, remember to snap a picture and share it on Instagram using #amyshealthybaking and tagging @amyshealthybaking IN the photo itself! (That guarantees I’ll see your picture! 🙂 ) I’d love to see your healthy homemade mini cinnamon graham crackers! 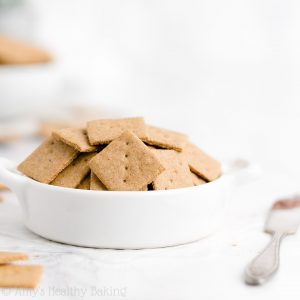 © Amy's Healthy Baking
Yields: 6 servings
I’m obsessed with these homemade snack crackers! They’re deliciously crunchy and lightly sweetened with lots of rich, cozy spice flavor… And they can be dangerously addictive! Leftovers should keep for at least two weeks if stored in an airtight container at room temperature (if they last that long!).
3.67 from 3 votes
Print Recipe Pin Recipe

For the gluten-free flour, I recommend the following: ½ cup (60g) millet flour, ¼ cup (30g) tapioca starch, ¼ cup (30g) brown rice flour, and ¼ teaspoon xanthan gum. Most store-bought gluten-free blends (like this one!) should also work, if measured like this.   Whole wheat pastry flour or all-purpose flour may be substituted for the white whole wheat flour. In a pinch, regular whole wheat flour may also be substituted, but the graham crackers may have a more distinct “wheat-y” flavor. (See my blog post above for more information on why I don’t call for graham flour for these homemade graham crackers!)   It’s very important to measure the flour correctly, using this method or a kitchen scale (← that’s the one I own!). Too much will dry out the dough. If the dough won’t come together after a few minutes of stirring and working in the ingredients, add additional water ½ teaspoon at a time until all of the dry ingredients are incorporated.   The type of cinnamon you use makes a BIG difference in the flavor! I buy my favorite cinnamon online here, and it’s the only kind I now use in my baking. I’m obsessed! It has a stronger, richer, sweeter flavor than the “regular” cinnamon that you find at most grocery stores. This gives your healthy homemade cinnamon graham crackers an even better flavor! If you’re not using the same cinnamon variety as I do, then increase the cinnamon by an additional ¼ teaspoon.   Honey or agave may be substituted for the pure maple syrup. For a sweeter flavor, substitute additional pure maple syrup (or honey or agave) for an equal amount of water.   Melted butter or any oil may be substituted for the coconut oil.   I highly recommend using a silicone baking mat and a silicone rolling pin. (← Those are the inexpensive ones that I own {just the rolling pin in black}, and they’re worth every penny!) The silicone material prevents the dough from sticking to both your work surface and your rolling pin, and it makes the whole process go so much faster!   If you don’t have a silicone baking mat and silicone rolling pin, then lightly flour your work surface and rolling pin before rolling out the dough in Step 3. Use parchment paper in place of the silicone baking mat. (If you slice through the parchment paper during Step 3, then use a fresh sheet to bake them on in Step 4!)   {gluten-free, vegan, dairy-free, egg-free, clean eating, low fat}
DID YOU MAKE THIS RECIPE?I'd love to hear what you think of it in a comment below! If you take a picture, tag @amyshealthybaking on Instagram or use the hashtag #amyshealthybaking.

The Healthier Chocolate Treats cookbook is perfect for any and all chocolate lovers. Whether you enjoy chocolate occasionally or every single day (that’d be me!), there are plenty of goodies inside for you! Healthier Chocolate Treats contains 50+ brand new healthier recipes. These recipes have never been seen before or appeared on my blog. You won’t find them anywhere else! And yes—every single one contains some form of chocolate. Whether you prefer milk, dark or white, there are lots of treats inside for you!     What Inspired You to Write Healthier Chocolate Treats? I have always loved chocolate. Every Halloween throughout my childhood, I inverted the entire contents of my bright orange jack-o-lantern bucket … END_OF_DOCUMENT_TOKEN_TO_BE_REPLACED