A healthy recipe for treats with the cozy flavors of pumpkin pie and the same fudgy texture as brownies! So easy & just 63 calories! 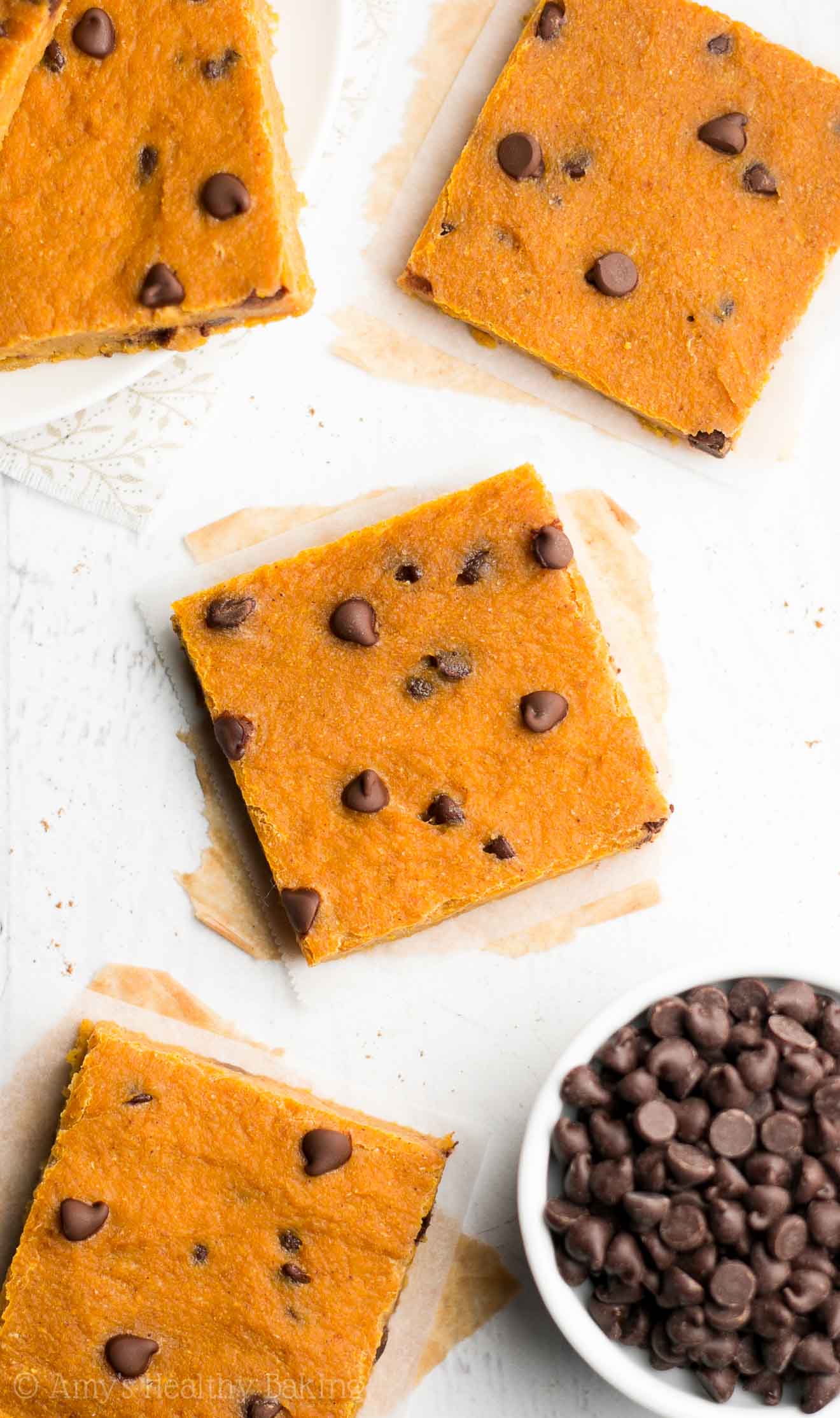 Before we jump into today’s story and recipe, I have a favor to ask. Would you please fill out this two-question survey? It will really help me understand what you want to see and better meet your needs. Thank you so much!  ♥

Early last week, I hopped into my car, setting my reusable grocery totes and a container of homemade treats to deliver to a friend on the passenger’s seat beside me. I glanced at the clock, inserted my key into the ignition, turned and…

I removed the key, peered at the dashboard, then slid it back into the slot. I rotated it multiple times, twisting as far as it would go, but the lights on the speedometer and gas gauge only flickered. My car refused to start.

Slightly panicked, I called my dad and described the situation. When I explained that I needed to drive across town for an important appointment in two hours, he immediately suggested to phone AAA to see if someone could come replace my car’s battery. 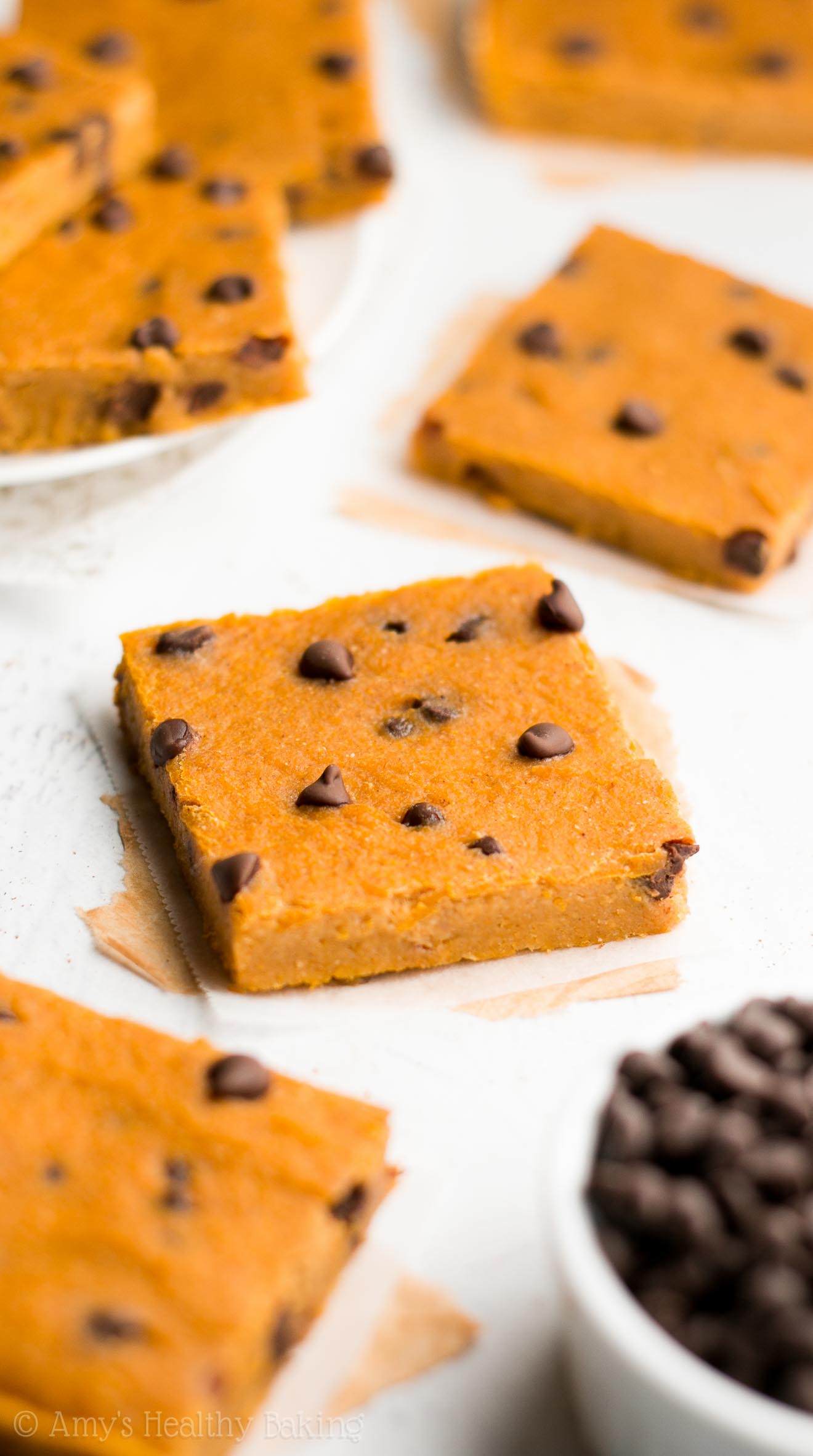 Half an hour later, a bright yellow tow truck pulled into the driveway alongside my car. A tall bearded man climbed out and introduced himself before plugging in his equipment to test the battery. When he confirmed it was dead and my car required a new one, he asked me to sign some paperwork and inquired how I wanted to pay.

“What’s easiest for you?” I replied. When he stated a credit card, I promptly nodded and agreed.

“Well, I could also take gold…” he quickly responded, a smile tugging at the corners of his mouth. 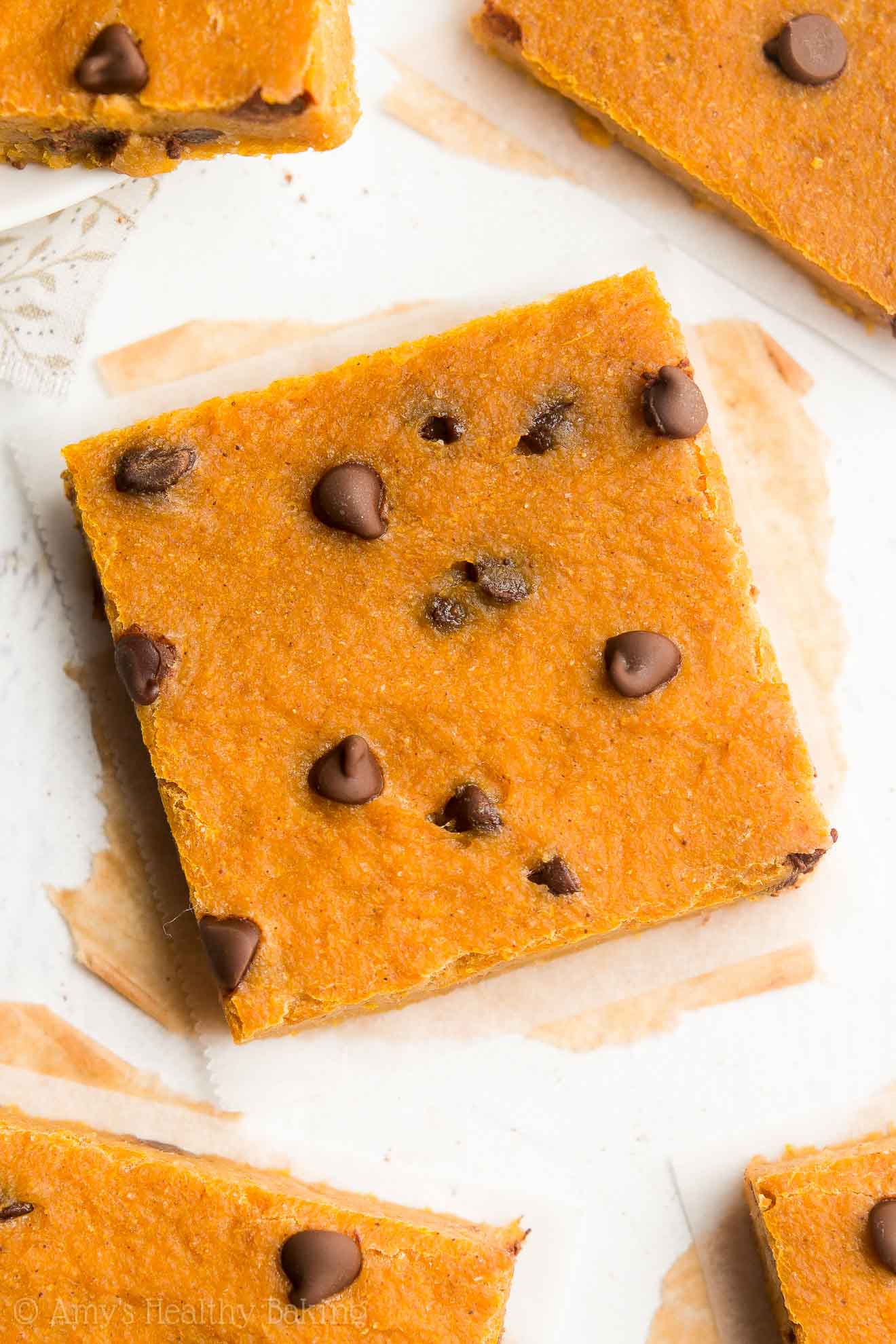 Little did he know that I had a fresh batch of my ultimate healthy oatmeal raisin cookies and these Chocolate Chip Pumpkin Pie Brownies sitting on my counter! These healthy autumn treats have the same fudgy texture as brownies, but they taste like pumpkin pie… And with just 63 calories, they come with absolutely no guilt! 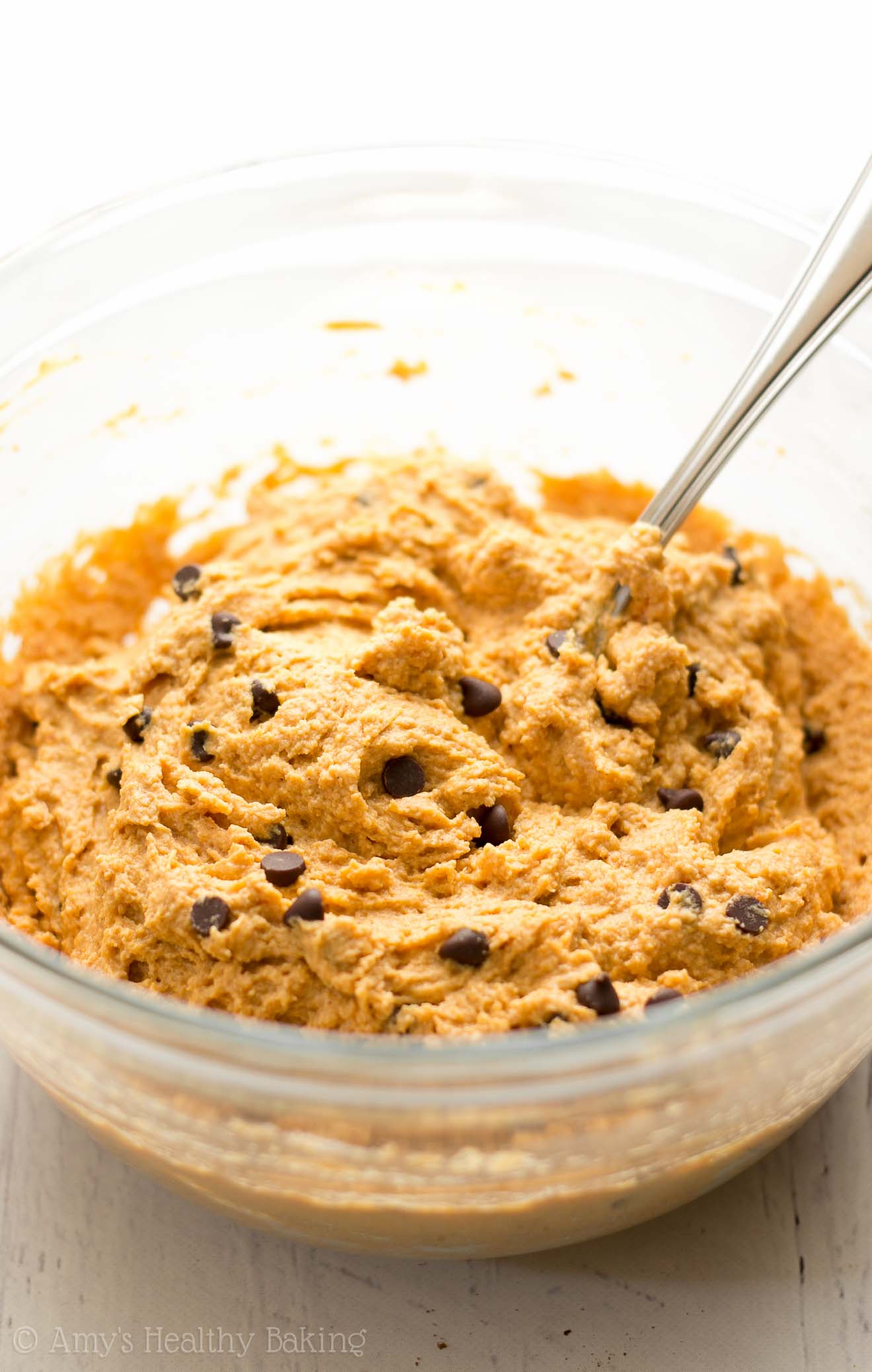 Note: Whole wheat pastry flour would be a great substitute, and I included my recommend gluten-free flour blend in the Notes section of the recipe, if you prefer.

Because this recipe only contains 1½ tablespoons of coconut oil, the rest of its irresistible texture comes from a combination of two ingredients: Greek yogurt and pumpkin purée. If you’ve been around my blog for a while, you know how much I love Greek yogurt! It adds the same moisture as extra butter or oil for a fraction of the calories, and with around 21g of protein per cup, it gives your baked goods a protein boost, too.

As for the second ingredient, remember to buy regular ol’ pumpkin purée! Skip the pumpkin pie mix; that contains refined sugar, which we’re avoiding in this healthy recipe. We’ll mix in our own clean eating sweetener and cinnamon to create that irresistible pumpkin pie flavor instead. (Bonus: The pumpkin purée also acts as an egg replacement, so the batter is perfectly safe to eat raw! If you like sneaking a taste test or two like me…) 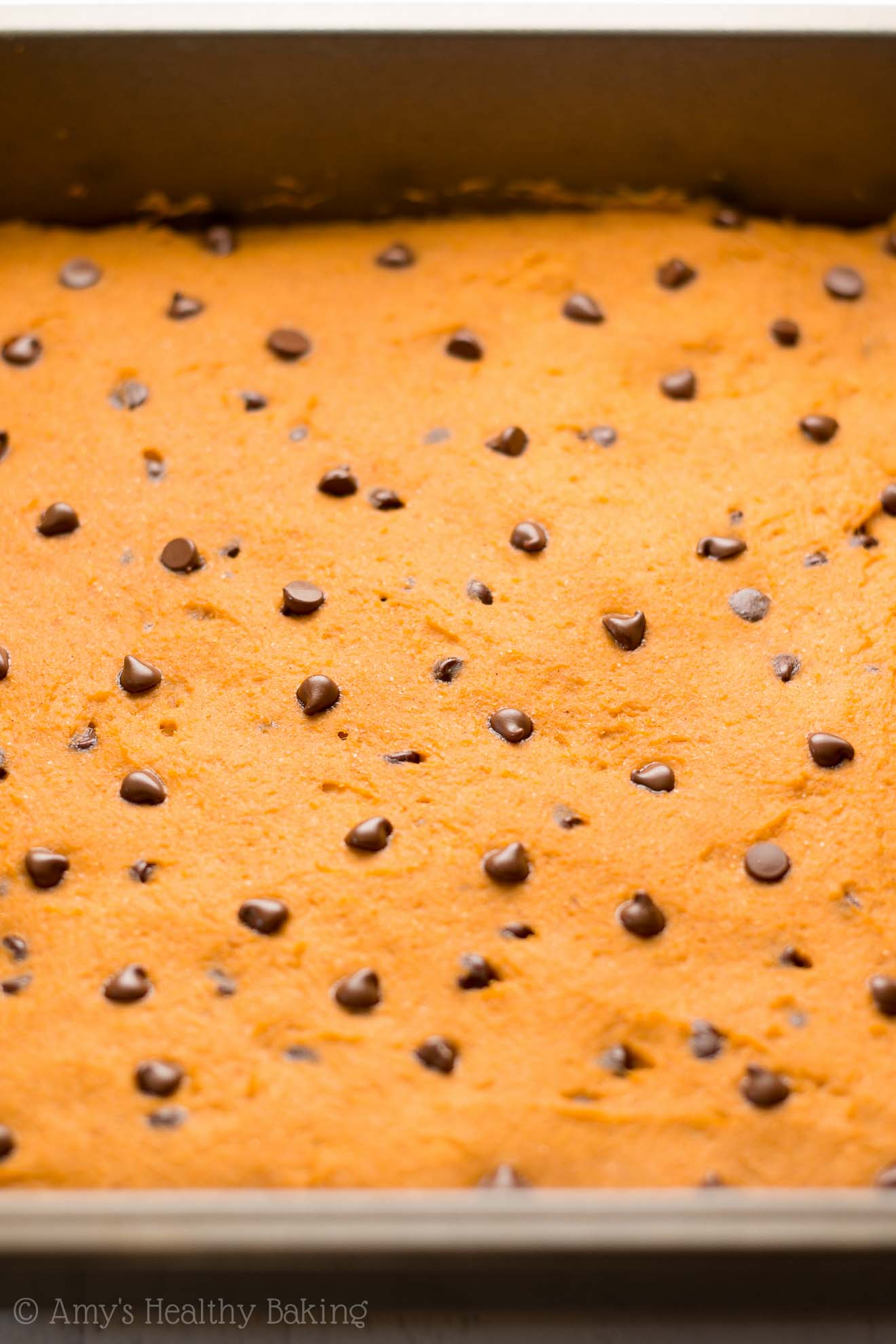 Instead of granulated sugar, you’ll mix in another one of my favorite ingredients: vanilla crème stevia. Stevia is a plant-based, no-calorie sweetener that’s clean eating friendly, and it’s highly concentrated. A little goes a long way—you’ll only need 1¼ teaspoons in this recipe! This is the kind that I buy because I love its warm vanilla flavor and don’t notice any strange aftertastes like with some other stevia products. You can find it at many health-oriented grocery stores, but I buy it online here because that’s the best price I’ve found. (And you’ll use it in all of these recipes of mine, too!)

And of course, don’t forget the mini chocolate chips! Their smaller size ensures that every bite contains at least one morsel of chocolate, which is incredibly important to a chocoholic like me. This is the brand that I love because the chips have a really rich flavor and melt very well. (I used them in lots of recipes in my Healthier Chocolate Treats cookbook, too!) 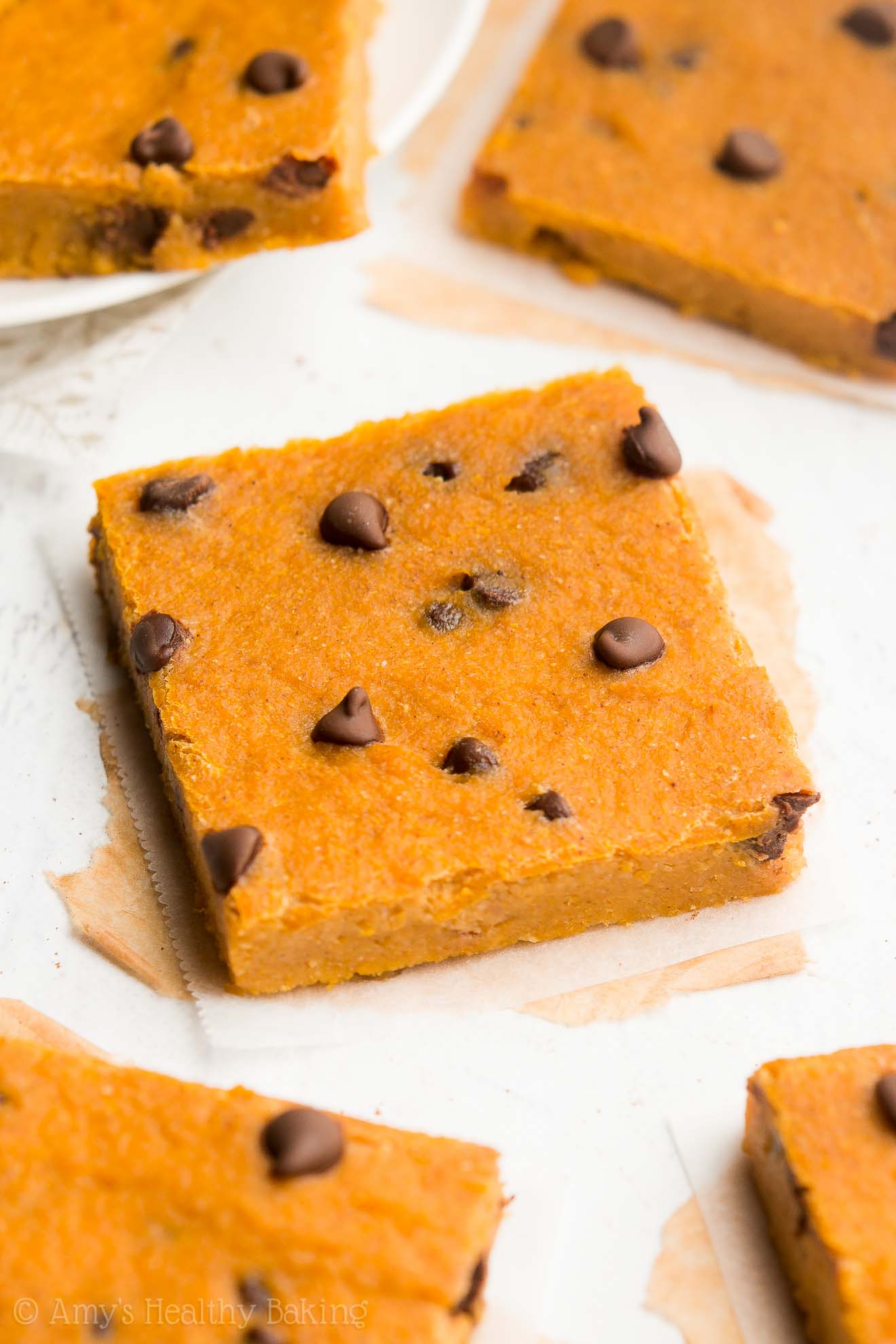 Who wants one?? And when you make your own, remember to snap a picture and share it on Instagram using #amyshealthybaking and tagging @amyshealthybaking IN the photo itself! (That guarantees I’ll see your picture! ?) I’d love to see your pumpkin pie brownies and feature them in my Sunday Spotlight series!

Click here to PIN the recipe and save it for later!
Yields: 16 brownies
These easy treats are perfect for any pumpkin lover! They have the cozy flavors of pumpkin pie and the same fudgy texture as brownies. They’ll keep for at least a week if stored in an airtight container in the refrigerator.
Notes: For the gluten-free flour, use as follows: ¾ cup (90g) millet flour, ¼ cup (30g) tapioca flour, ¼ cup (30g) brown rice flour, and ¾ teaspoon xanthan gum. Most store-bought gluten-free flour blends should work as well, if measured like this.

Whole wheat pastry flour or all-purpose flour may be substituted for the white whole wheat flour. In a pinch, regular whole wheat flour will work, but the brownies will have a slightly more wheat-y flavor that may mask some of the banana flavor.

Any milk will work in place of the nonfat milk.

For a vegan version, substitute pumpkin purée for the Greek yogurt, and substitute any non-dairy milk in place of the nonfat milk.

I highly recommend using the vanilla crème stevia! It's my favorite no-calorie sweetener, and you'll use it in all of these recipes of mine, too. The best substitute I can recommend in place of the vanilla crème stevia is 3 ¾ teaspoons of this powdered stevia. If substituting a different sweetener (i.e. coconut sugar, honey, pure maple syrup, etc.), you’ll need about ½ cup, and the baking time and texture will be different.

*If the coconut oil or butter re-solidifies upon adding the Greek yogurt, microwave the mixture for 10-14 seconds to re-melt it (ONLY if your bowl is microwave safe!).

The Healthier Chocolate Treats cookbook is perfect for any and all chocolate lovers. Whether you enjoy chocolate occasionally or every single day (that’d be me!), there are plenty of goodies inside for you! Healthier Chocolate Treats contains 50+ brand new healthier recipes. These recipes have never been seen before or appeared on my blog. You won’t find them anywhere else! And yes—every single one contains some form of chocolate. Whether you prefer milk, dark or white, there are lots of treats inside for you!     What Inspired You to Write Healthier Chocolate Treats? I have always loved chocolate. Every Halloween throughout my childhood, I inverted the entire contents of my bright … END_OF_DOCUMENT_TOKEN_TO_BE_REPLACED