An easy recipe for extra rich & fudgy brownies made without traditional flour. So easy & secretly guilt-free with just 74 calories! 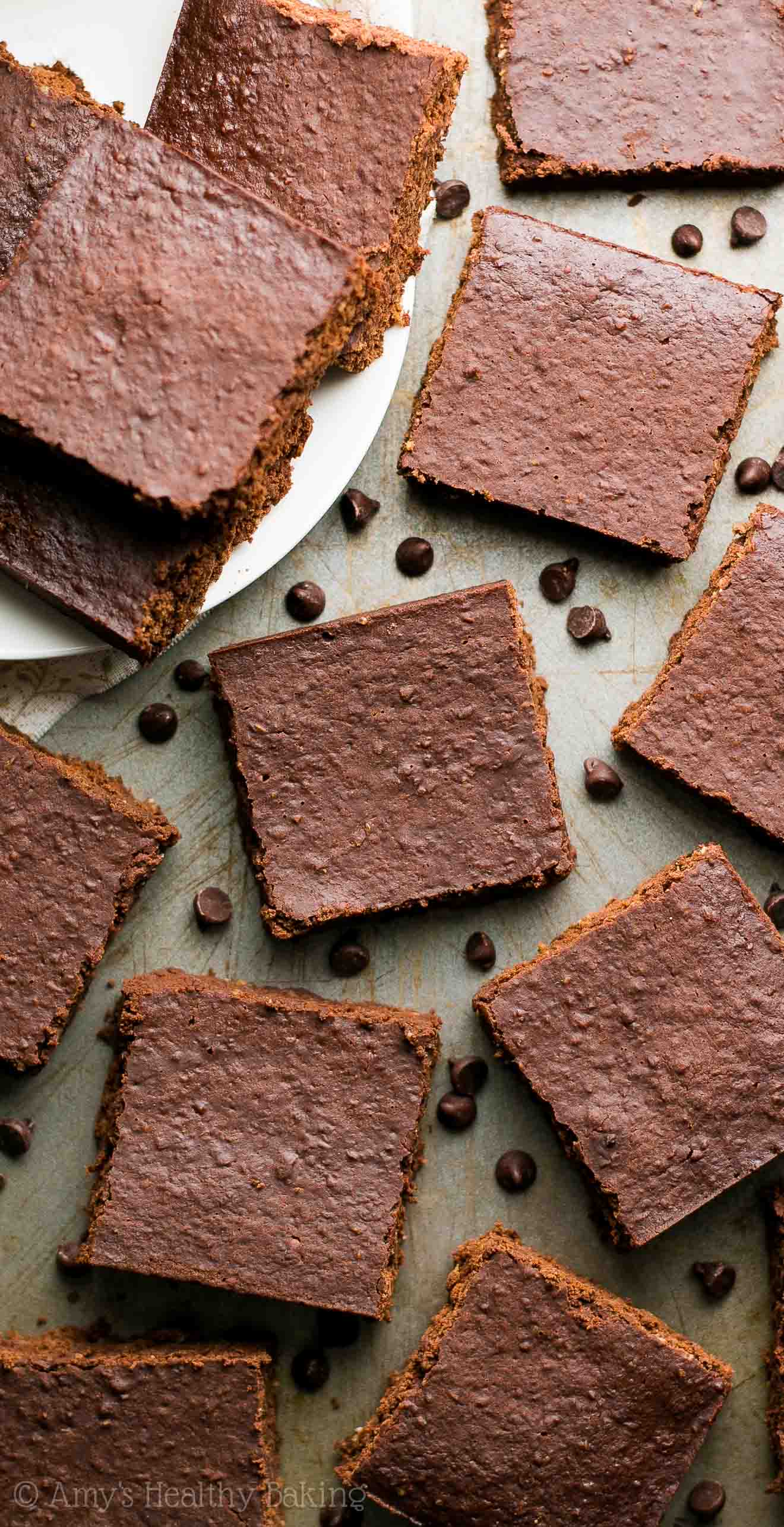 After finishing our finals during my senior year of high school, a few of my friends and I celebrated with lunch at the newly-opened Cheesecake Factory, located at our town’s mall about two miles away. Since we arrived shortly after they started service, the hostess immediately seated us at a table outside.

As my first time at the restaurant, I took my time browsing through the menu, scanning the descriptions of any dish that sounded interesting or appealing. If you’ve dined there before, you know how long that menu is: with over 250 items, it’s nearly as thick as a textbook! (Only a slight exaggeration…) 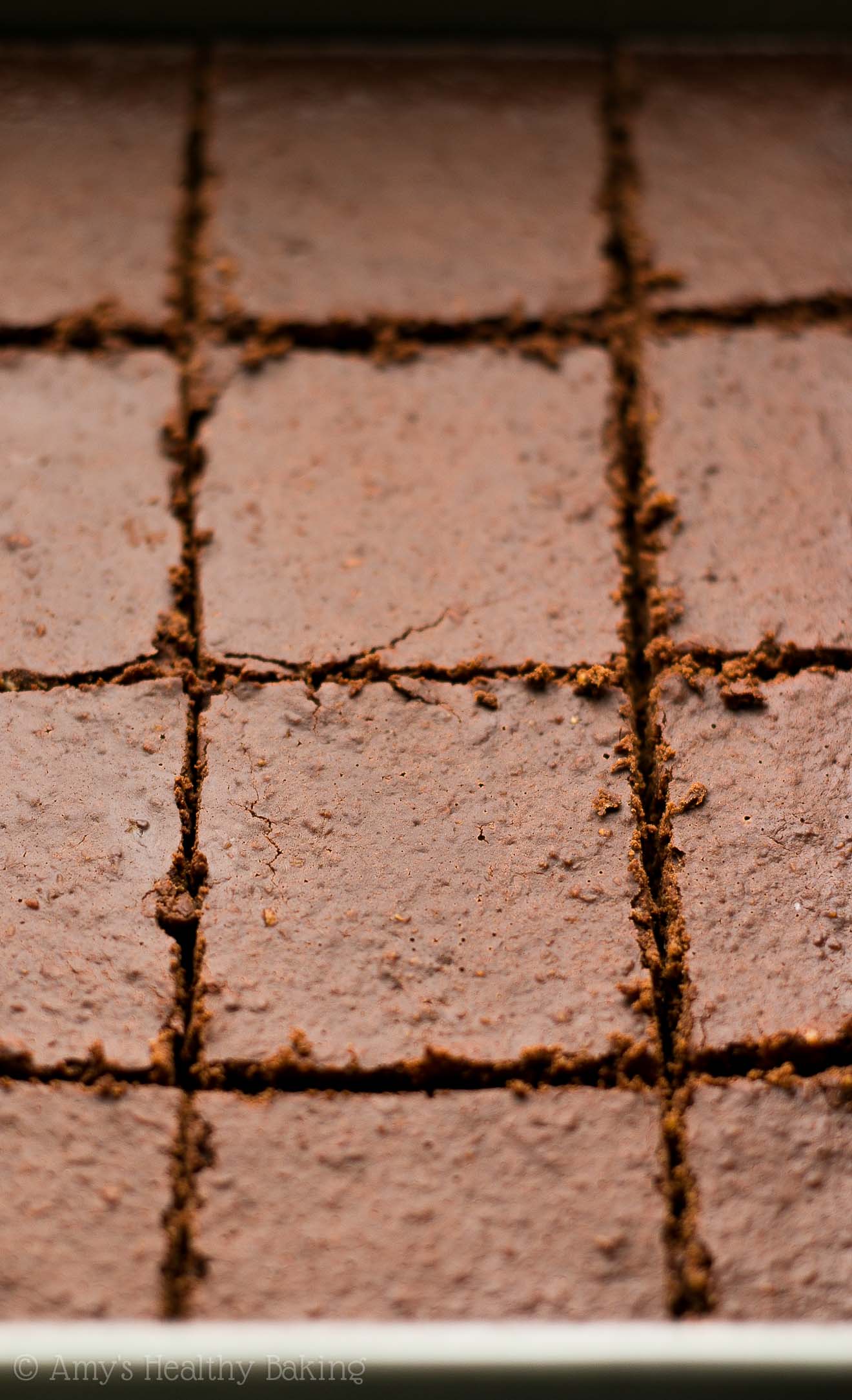 I finally settled on the fresh vegetable salad with chicken (still my favorite meal that I order whenever I go!), and I tried to tide myself over by slowly nibbling on slices of the fresh sourdough and molasses-oat bread. With five of us at the table sharing the same complimentary basket, that wasn’t hard at all, and we each saved plenty of room for our entrées.

Knowing I’d spend the next few days at graduation parties and indulging in lots of treats to celebrate, I opted to skip dessert when our server dropped off those second menus. However, most of my friends ordered something sweet to end their meal, including a classic strawberry-topped cheesecake, chocolate cheesecake, and brownie sundae. 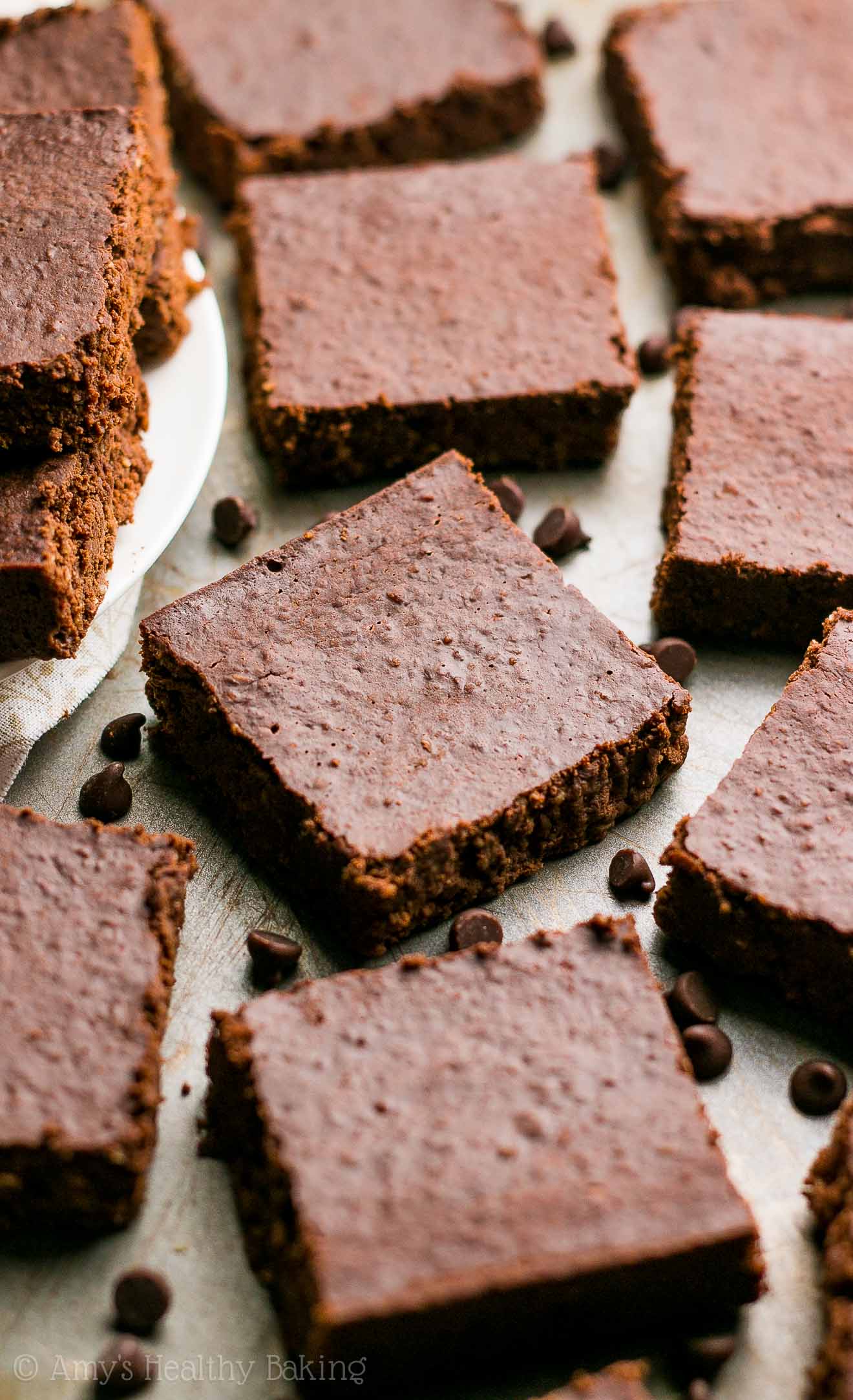 While the cheesecakes looked incredibly rich, I started eyeing the brownie dessert as soon as I spotted it on the waitress’s tray. Three thick triangular brownies, the fudgiest I’d ever seen, served with two scoops of sweet vanilla ice cream and finished with a generous amount of hot fudge sauce. My chocoholic heart literally skipped a beat, and when my friend proclaimed he was done, he offered me the rest… And I happily sampled (or, umm, maybe finished off…) the brownies!

When I drove past the Cheesecake Factory last week, I thought of that celebratory lunch, especially the brownie sundae. Although highly tempted to stop my car and order dessert, I headed straight home and immediately started to mix up a healthier batch of my own. But if you read my last recipe blog post, you’ll recall that I realized I had completely run out of flour! 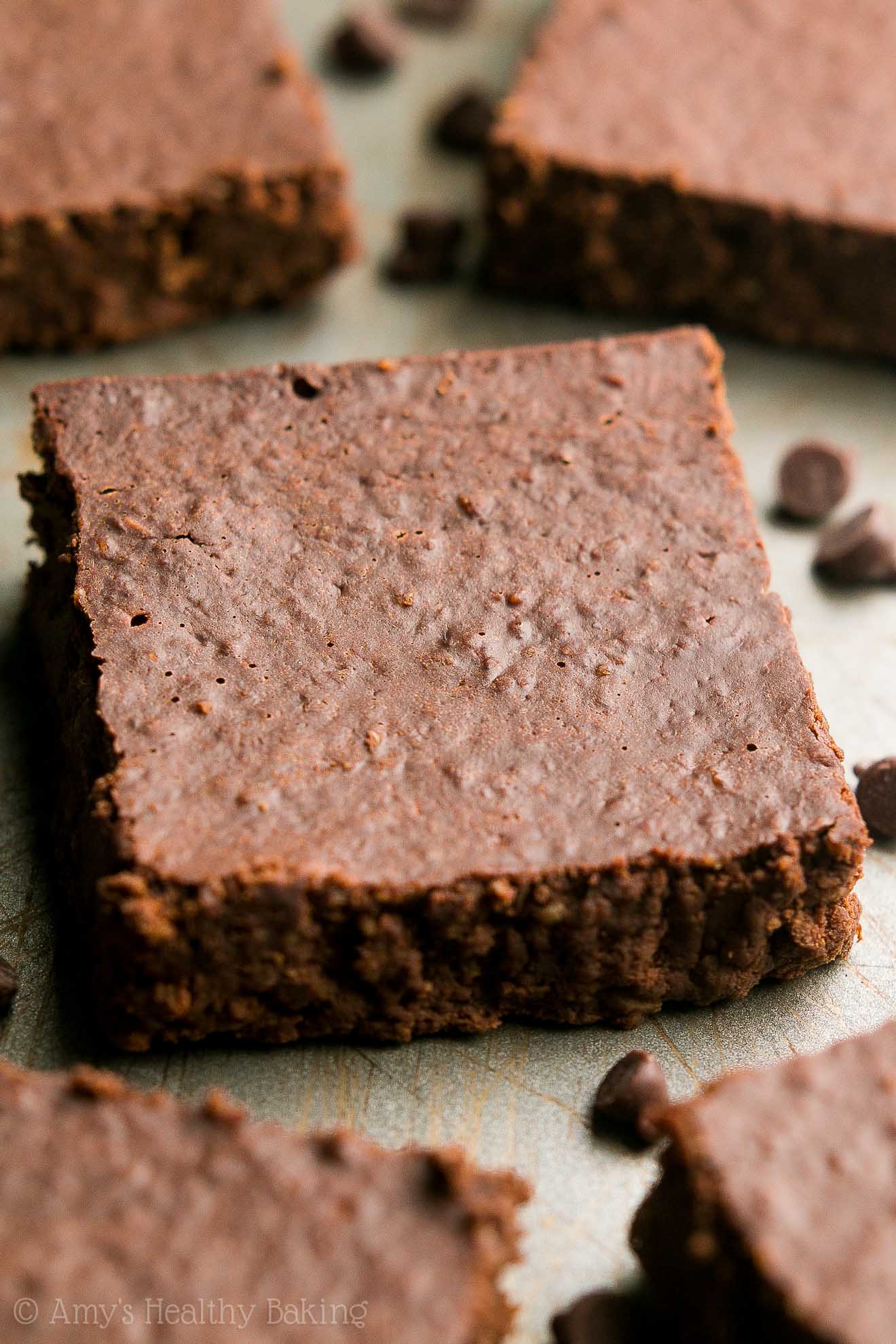 So I improvised and whipped up these Practically Flourless Extra Fudgy Brownies instead! They’re just as chocolaty and fudgy as the ones from that original Cheesecake Factory dessert, but they contain absolutely no butter, heavy cream, refined flour or sugar.

And with just 74 calories, I don’t feel guilty about sneaking seconds! 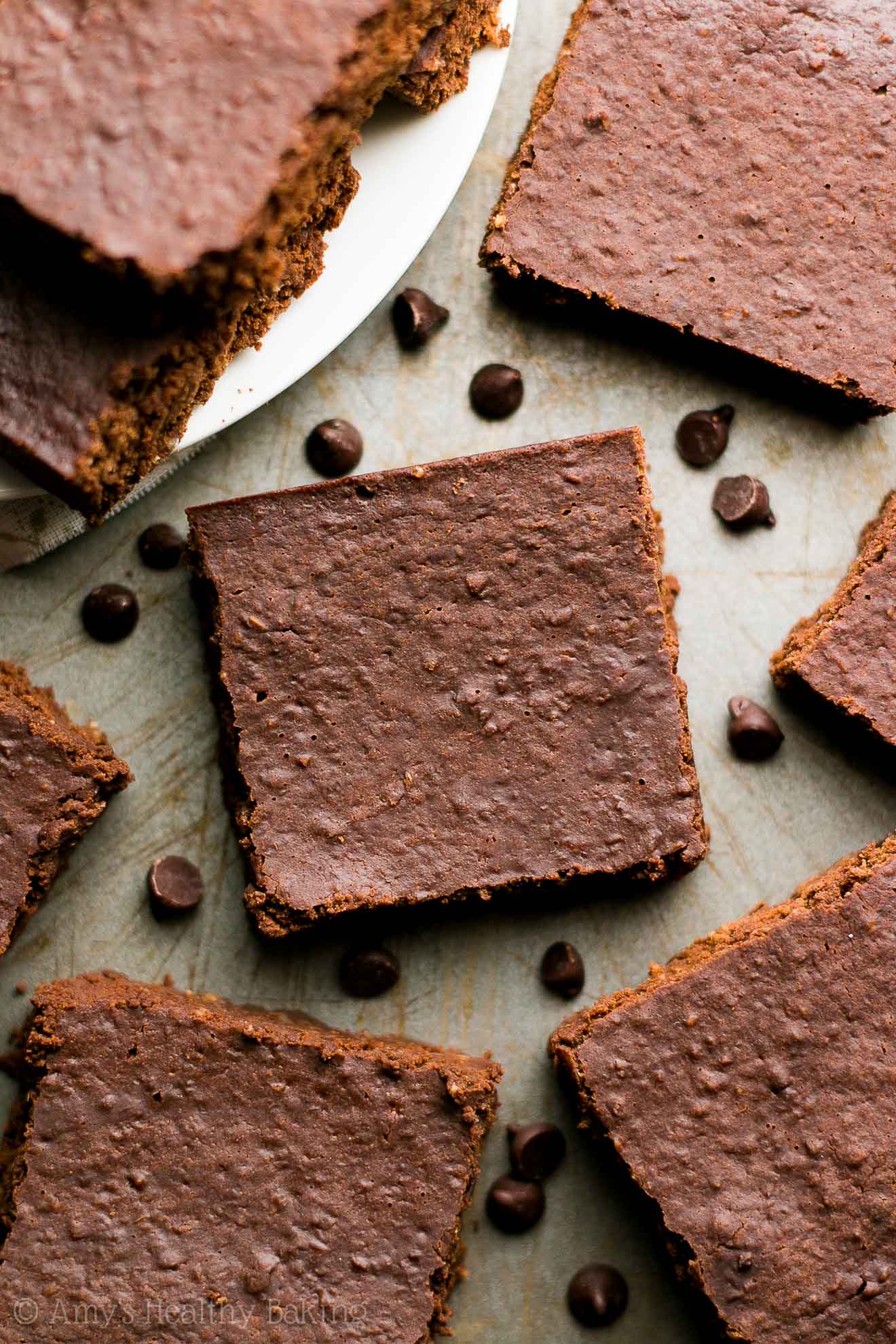 They’re practically flourless because you’ll use homemade oat flour instead of regular all-purpose flour! Oat flour is almost exactly what it sounds like—ground up oats—and it’s incredibly easy to make your own. Just follow my quick instructions here. It only takes a few minutes, and it’s much cheaper than store-bought!

Next, you’ll add an equal amount of unsweetened cocoa powder to the bowl. That’s right—a full ¾ cup! When it comes to brownies, I’m too lazy to melt chocolate, and as a chocoholic who considers chocolate to be its own food group, I basically want to dive into my dessert ASAP. Just remember: it’s very important to measure the cocoa powder correctly, using a kitchen scale or this method, because too much will dry out your brownies and make them taste bitter. 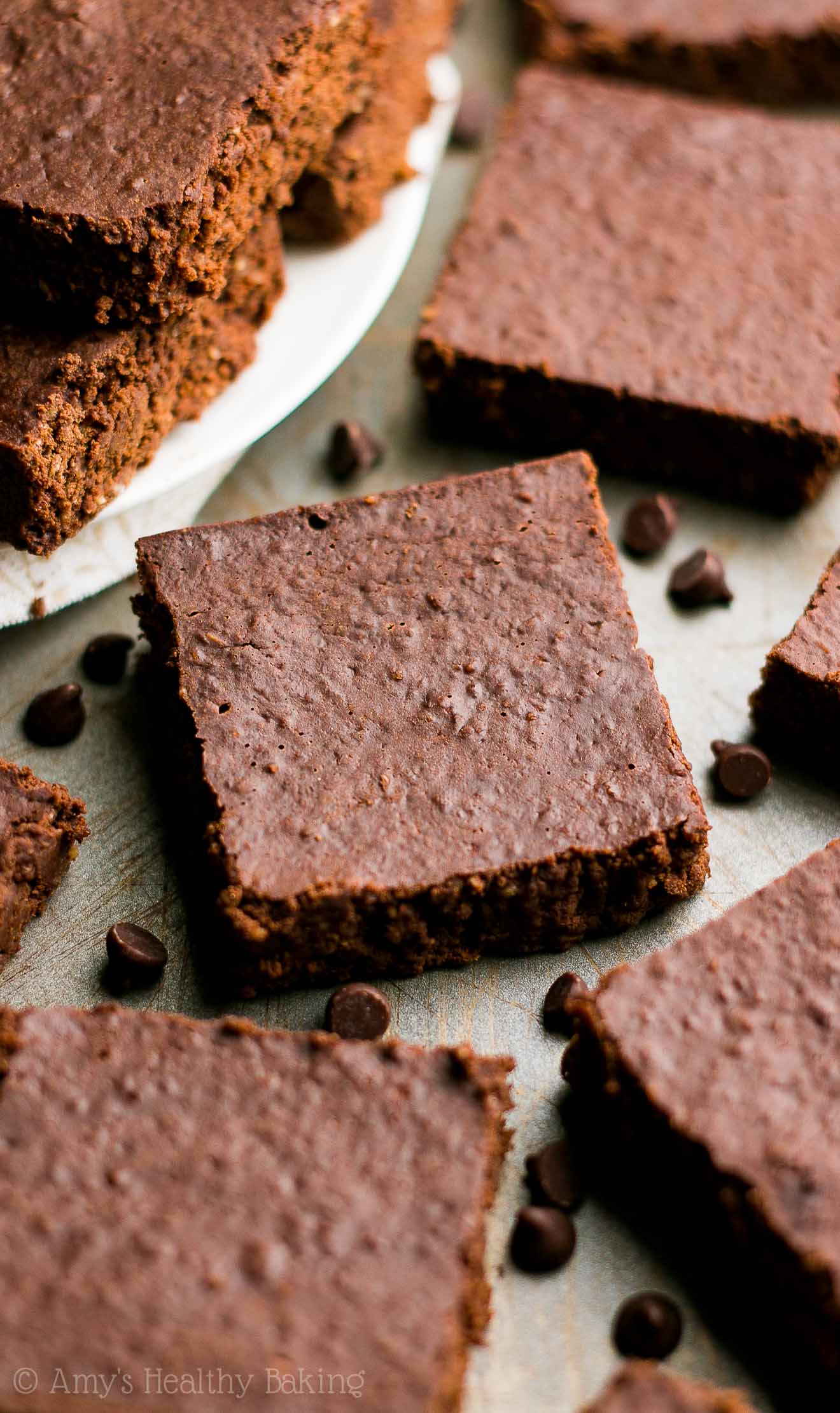 With only 1 tablespoon of coconut oil, the brownies get the rest of their fudgy texture from my favorite ingredient in healthier baking. If you’ve been around AHB for a while, you already know what it is… Greek yogurt! Greek yogurt provides the same moisture as extra oil or butter for a fraction of the calories, and it gives your brownies a protein boost too.

To sweeten these, you’ll skip the granulated sugar and use pure maple syrup instead. Make sure you buy the good kind! Avoid pancake syrups or sugar-free syrups; those contain corn syrup or artificial ingredients. The only ingredient on the label should be “maple syrup,” and it generally comes in thin glass bottles or squat plastic jugs. I’ve even bought it online here at a slightly discounted price!

I have a special trick to extra fudgy brownies… You’ll bake them at a low temperature, just 300°F, and pull the pan out of the oven when the edges look done but the center still appears glossy and not fully set. The heat from the pan will continue to cook the center while they cool without drying out the edges. If the brownie edges begin pulling away from the sides of the pan within about 15 minutes of removing the pan from the oven, you baked them for the perfect amount of time! 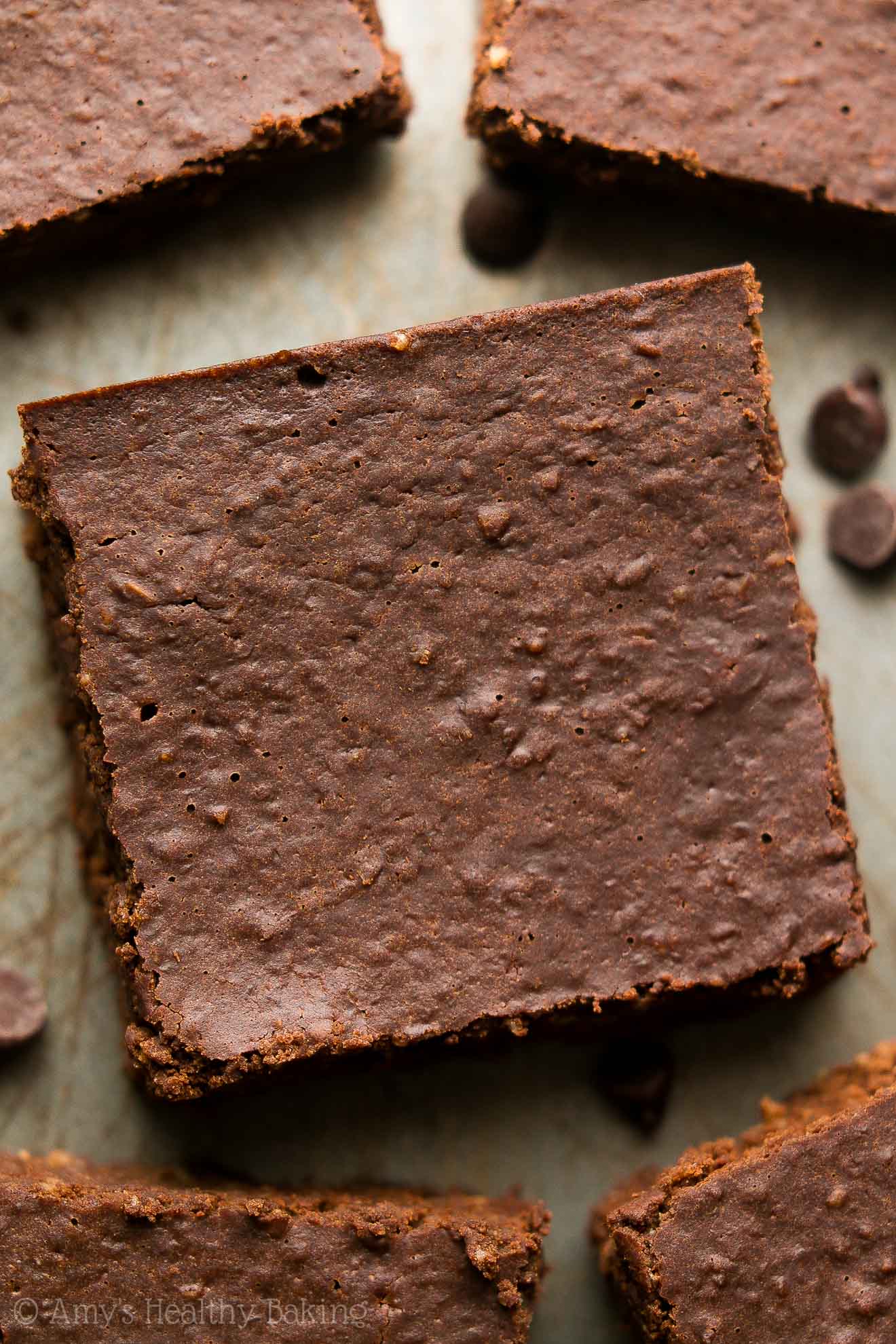 Who’s ready for a treat?? You better believe I am… Brownies are actually my favorite dessert! ? And when you make your own, remember to snap a picture and share it on Instagram using #amyshealthybaking and tagging @amyshealthybaking IN the photo itself! (That guarantees I’ll see your picture! ?) I’d love to see your brownies and feature them in my Sunday Spotlight series!

Click here to PIN the recipe and save it for later!
Yields: 16 brownies
These brownies are a chocoholic’s dream come true! They’re incredibly rich, full of dark chocolate flavor, and they practically taste like squares of fudge. The brownies will keep for at least a week if stored in an airtight container in the refrigerator—if they last that long!
Notes: Remember to make your easy homemade oat flour with gluten-free oats, if necessary!

The Healthier Chocolate Treats cookbook is perfect for any and all chocolate lovers. Whether you enjoy chocolate occasionally or every single day (that’d be me!), there are plenty of goodies inside for you! Healthier Chocolate Treats contains 50+ brand new healthier recipes. These recipes have never been seen before or appeared on my blog. You won’t find them anywhere else! And yes—every single one contains some form of chocolate. Whether you prefer milk, dark or white, there are lots of treats inside for you!     What Inspired You to Write Healthier Chocolate Treats? I have always loved chocolate. Every Halloween throughout my childhood, I inverted the entire contents of my bright orange jack-o-lantern bucket … END_OF_DOCUMENT_TOKEN_TO_BE_REPLACED