A healthy recipe for tender cinnamon rolls with a sweet, gooey, apple pie spice filling! Made with no refined flour or sugar & only 112 calories! 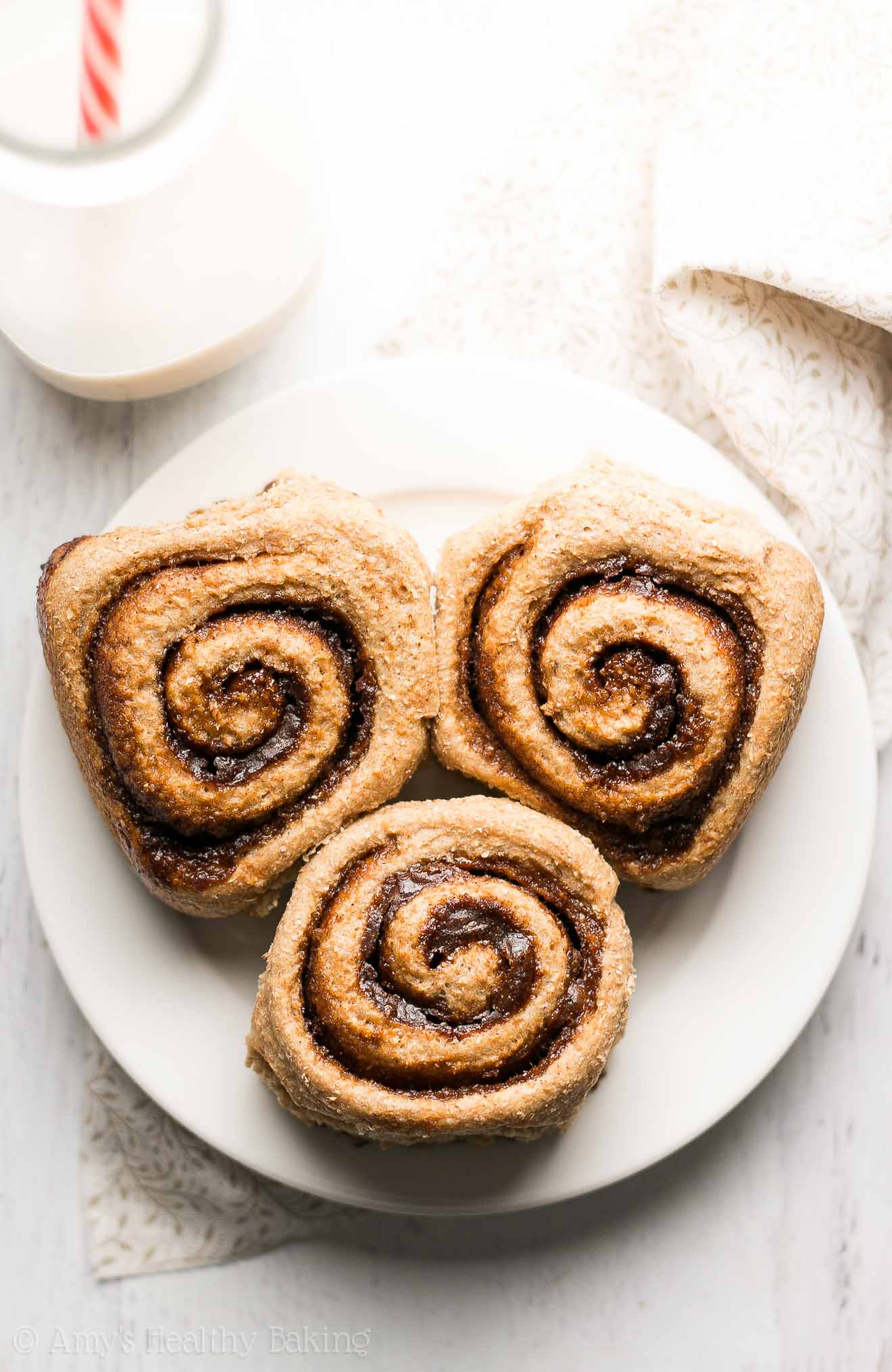 I first decided to try making cinnamon rolls by myself as a senior in high school. I pulled my favorite cookbook off the shelf, flipped through the pages until I found its lightened-up recipe, and set to work pulling measuring cups and mixing bowls from the cupboards.

I carefully followed the instructions, glancing over at the cookbook every few minutes to double check the recipe, and ended up with a square pan with nine fat cinnamon rolls ready for the oven. I set a timer, popped them in to bake, and waited impatiently as the seconds ticked by.

After letting them cool for a few minutes, my family and I each served ourselves a hot pastry from the pan. As everyone took their first sweet gooey bite, smiles lit up our faces… But even with their perfect taste and texture, I still felt like something wasn’t quite right about the cinnamon rolls. 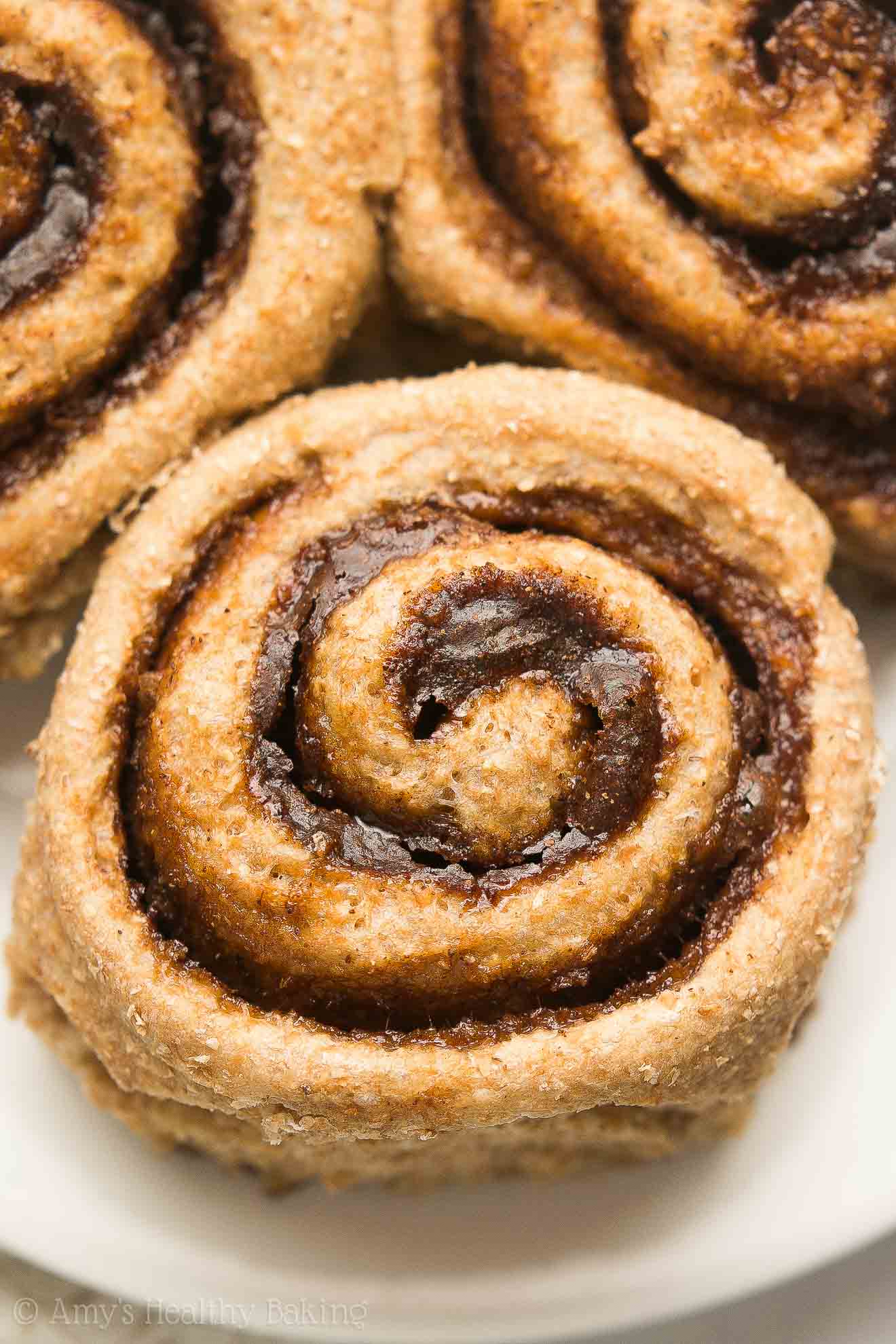 Eventually I realized the missing piece… To make the recipe easier on beginner bakers, the cookbook omitted yeast and simply called for baking powder and baking soda, yet my favorite part of making any bread-related product is kneading the dough, feeling its sticky kiss slowly diminish as my floured palms carefully work in more flour, and patiently waiting as the yeast works it magic and pushes the dough skyward as it rises before baking.

Even in today’s age of stand mixers and dough hooks, I still knead everything by hand. There’s something so soothing and special about the process! 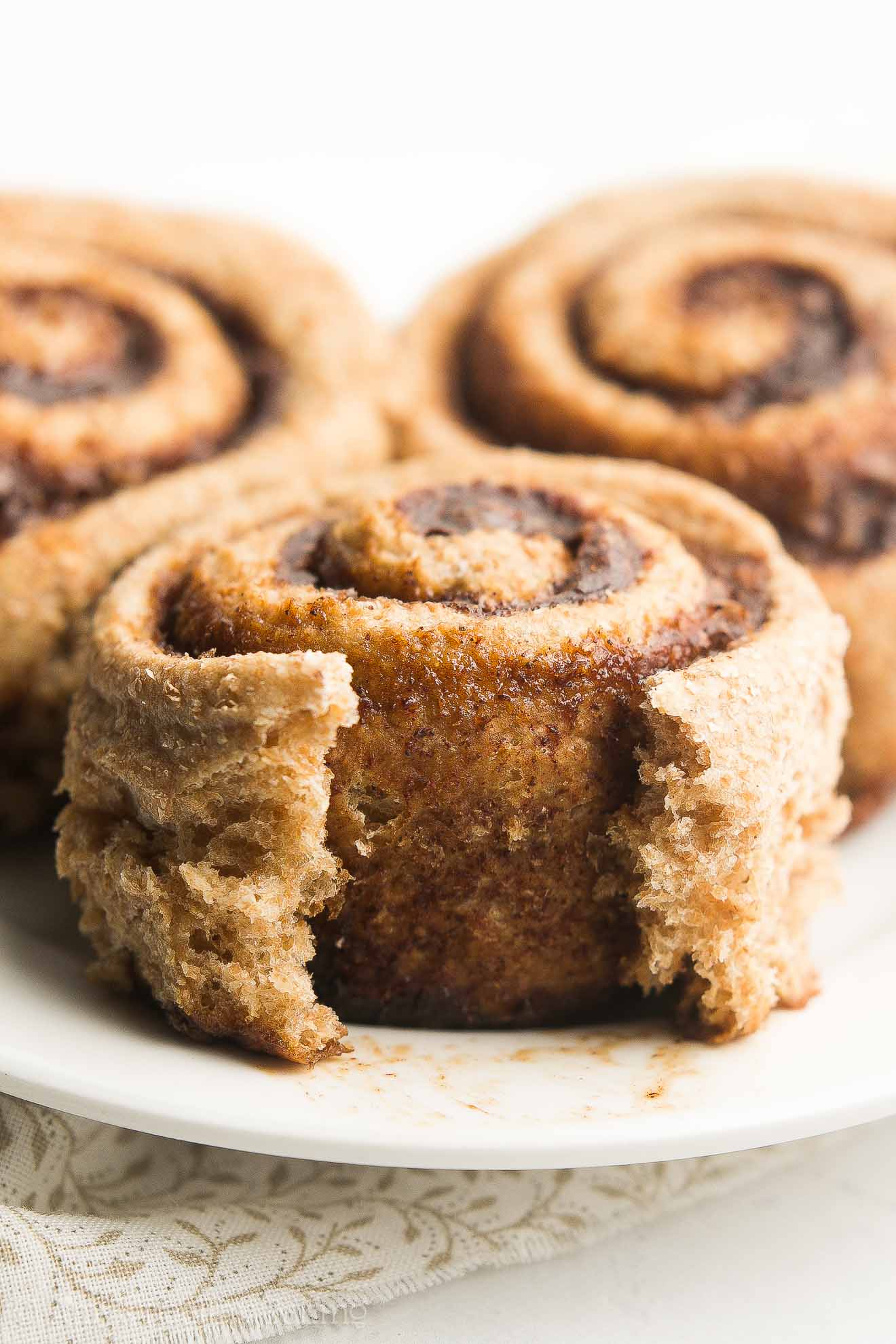 So when I started craving cinnamon rolls last week, that’s exactly what I did… Although I added a fun little twist to the filling to create this recipe for Healthy Apple Pie Spice Cinnamon Rolls! They’re perfectly puffy and tender, just like any bakery’s, but with no refined flour or sugar and only 112 calories, they come with none of the guilt! 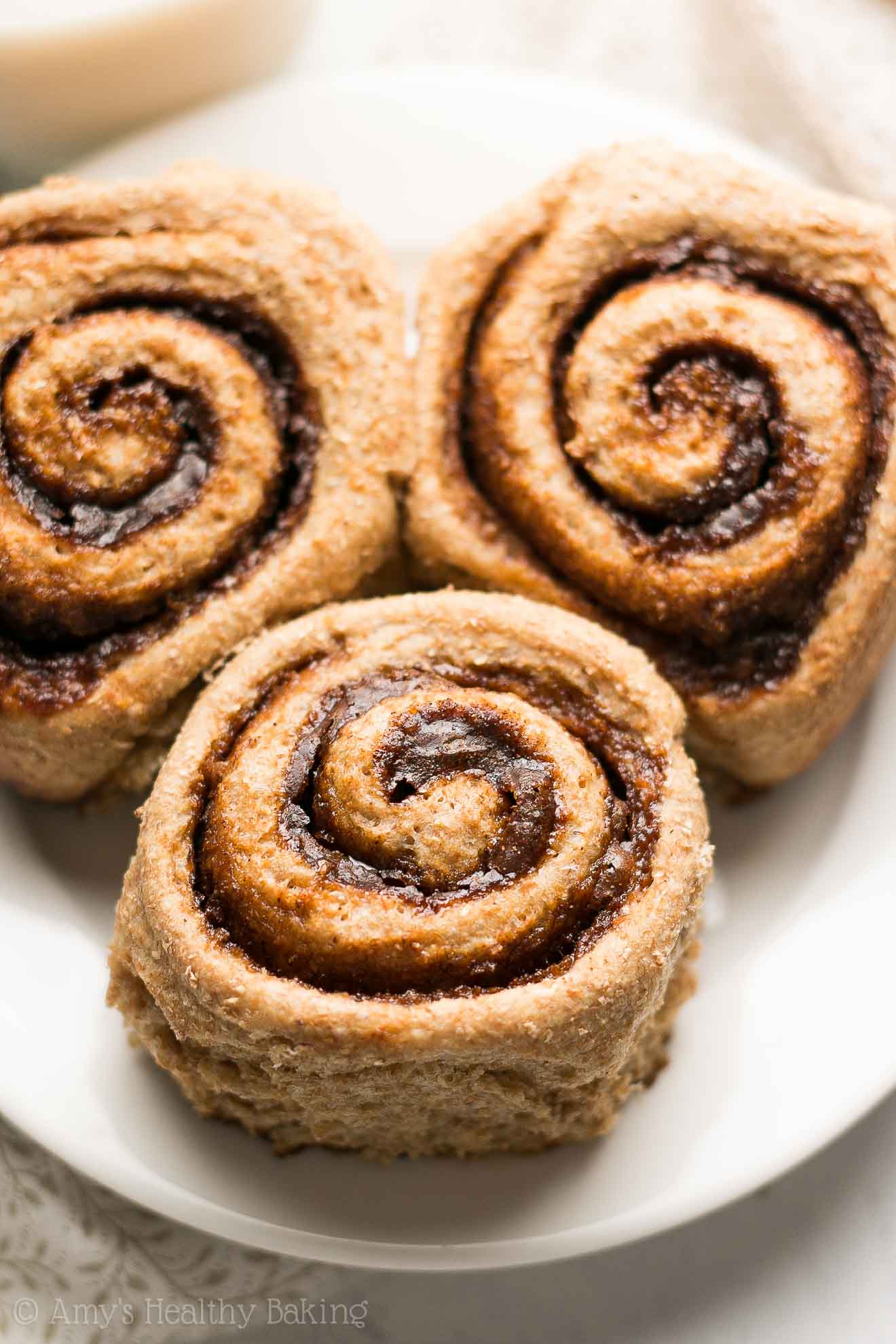 I know baking with yeast may be intimidating, but I promise it’s not that hard! I first started baking with yeast as an 8-year-old when Dad invited me to help him make his special homemade whole wheat rolls during the holidays. If I could handle yeast at that age, I know you can too!

Over the years, I’ve come to realize a few key tips for making healthy cinnamon rolls, and I’m passing them along to you! As long as you follow these tricks, you’ll have perfect cinnamon rolls on your kitchen counter in no time. 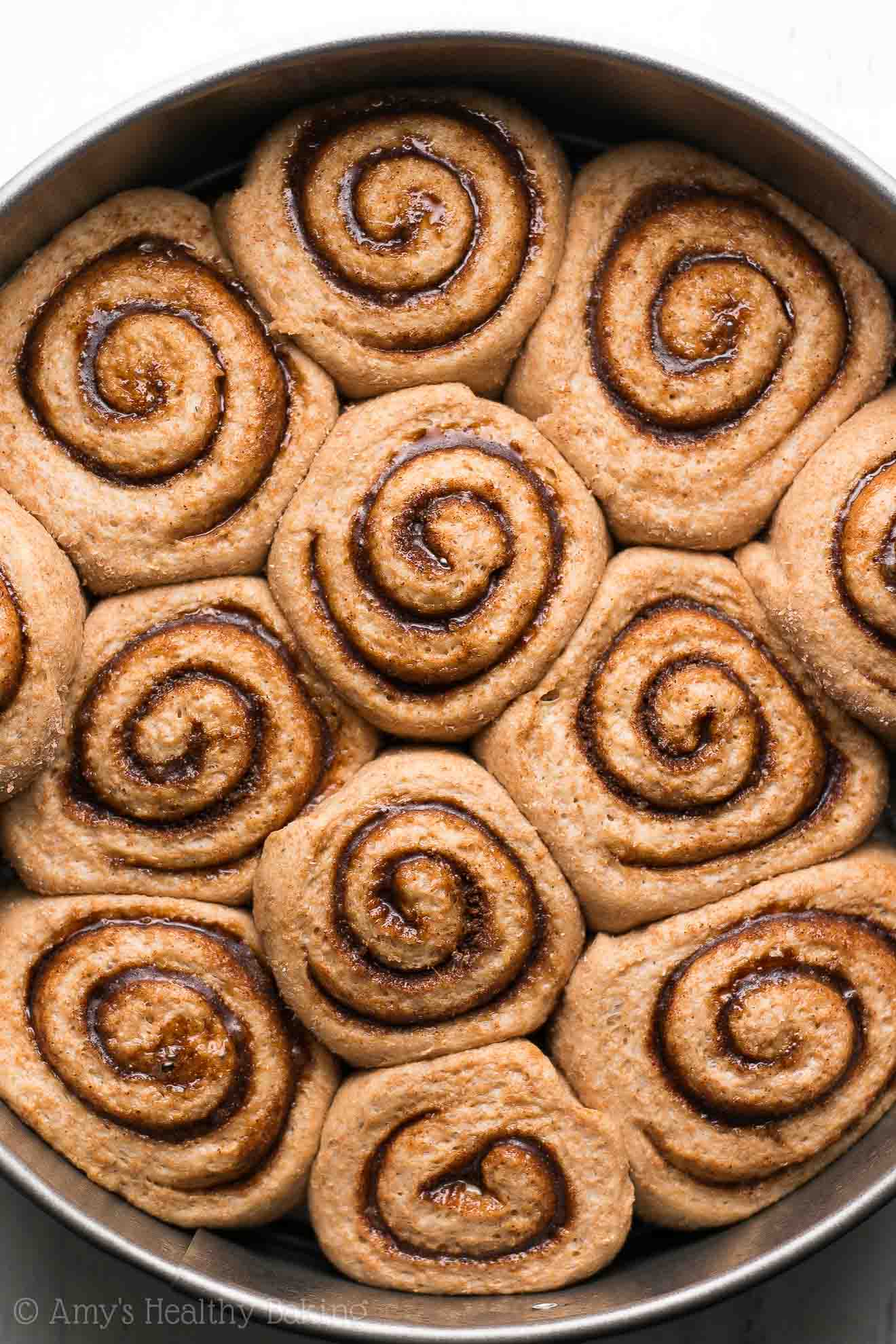 To start, you’ll need whole wheat flour and yeast. Although many brands will work, I’ve discovered two that work perfectly every time: Gold Medal whole wheat flour and Red Star Yeast. Gold Medal’s flour seems allows bread dough to rise to be at least twice its original size, whereas some other brands barely rise at all. (I also love Bob’s Red Mill flour, but it isn’t as easy to find in grocery stores as Gold Medal!)

Just like the flour, Red Star Yeast performs faster and better than other brands I’ve tried. It works together with my favorite flour to help these cinnamon rolls rise to double their size, whereas some other brands barely rise—if at all! Both Red Star’s regular and quick-rise yeasts will work, and since it’s slightly harder to find in grocery stores than the flour, I typically buy it online here. 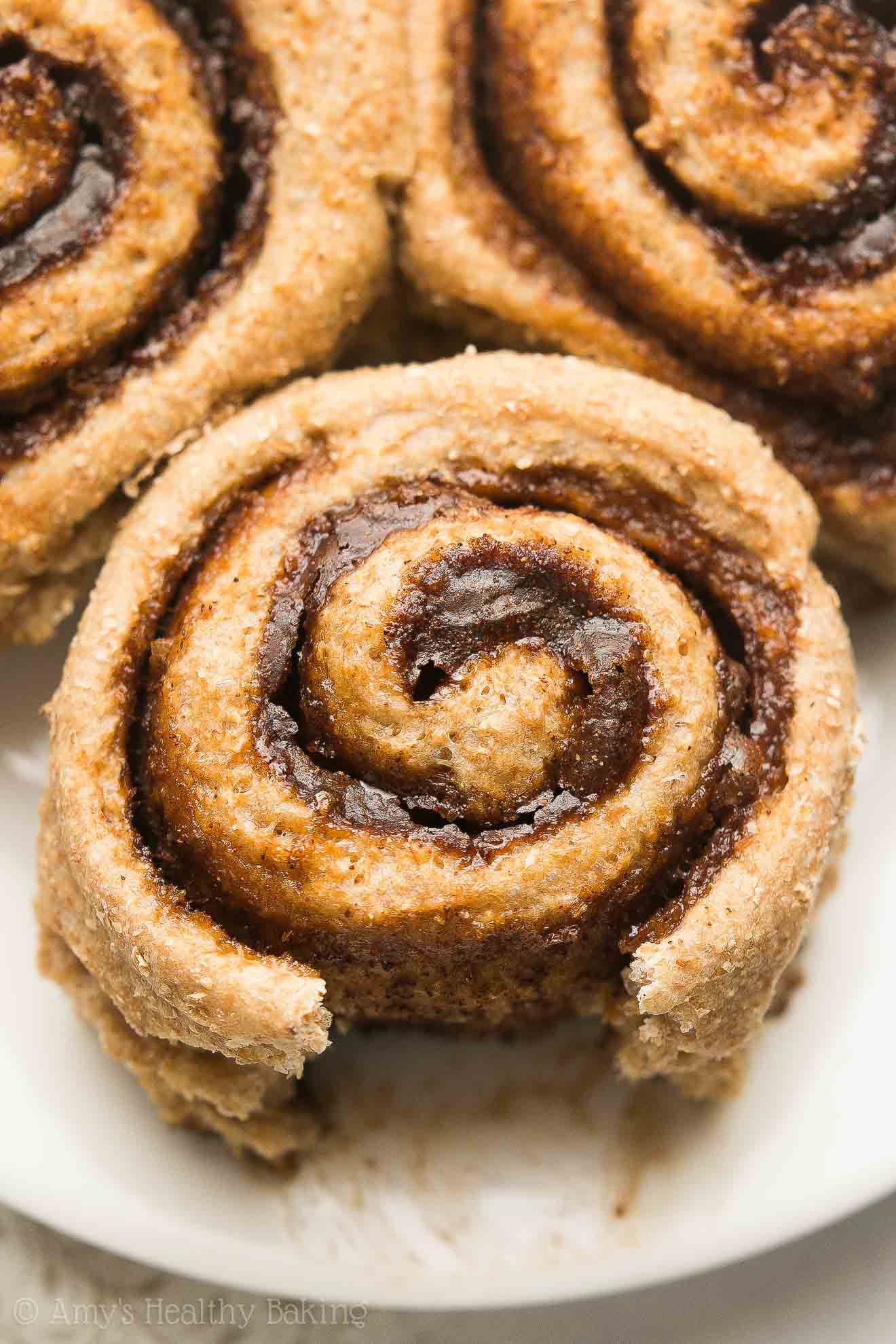 To make sure that yeast magic works and the rolls rise to be twice their size, it’s important to use warm milk. Not too hot and not too cold, just like Goldilocks’ favorite porridge! Too cold = the yeast takes forever to activate and rise. Too hot = the yeast dies and doesn’t work at all! If you dip your finger into the warm milk, it should feel like hot bath water or the temperature of a hot tub.

Once you’ve kneaded the dough, rolled it out, sprinkled on the filling, and rolled it up into a log, it’s time for another one of my tips… This one is on how to cut perfectly round cinnamon rolls: use dental floss! Even sharp knives will smoosh the log into more oval-shaped rolls, but dental floss leaves them looking like perfect circles. You can see how I do that in this video!

Then let them rise into fluffy pillows, pop them in the oven, set your timer, and… 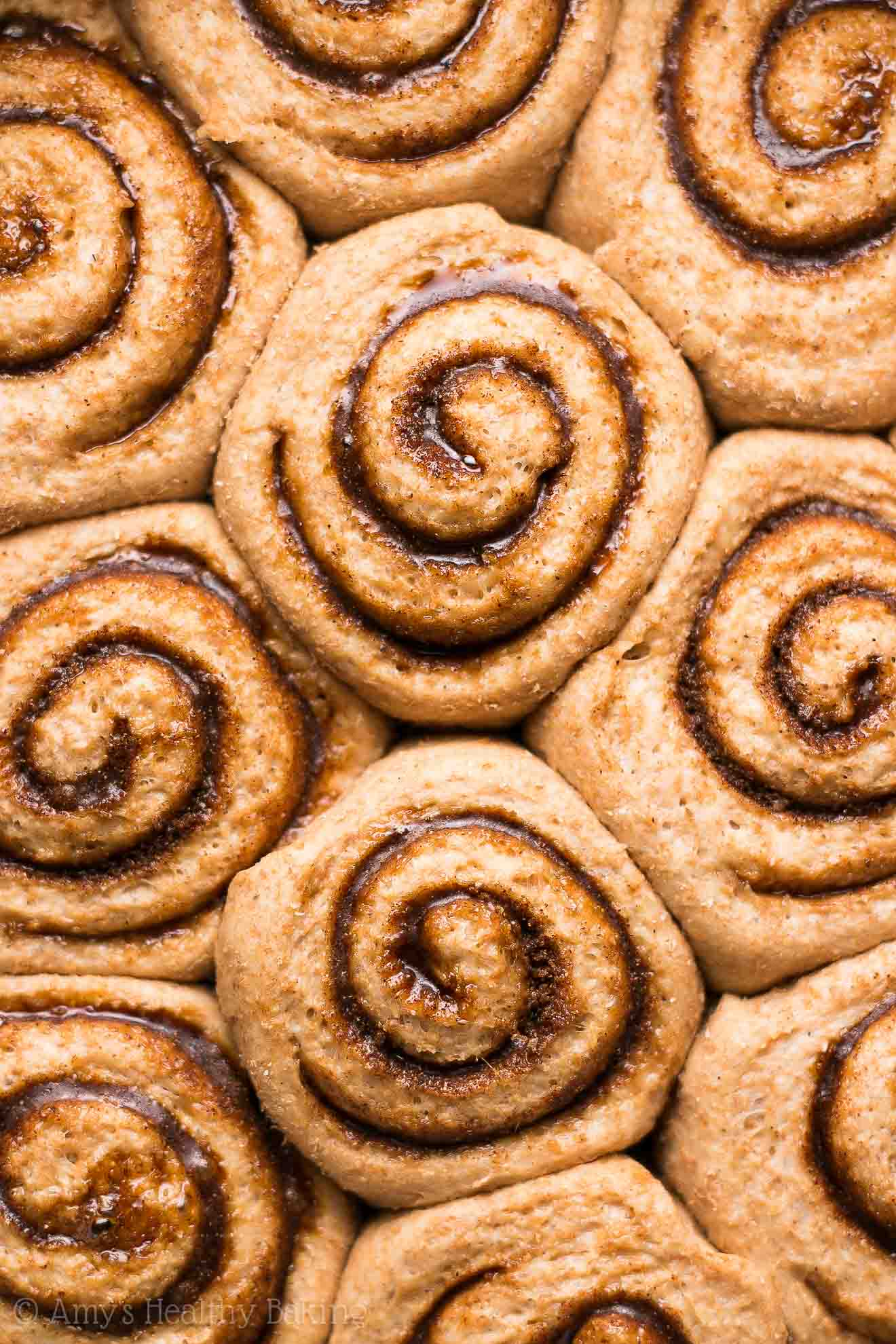 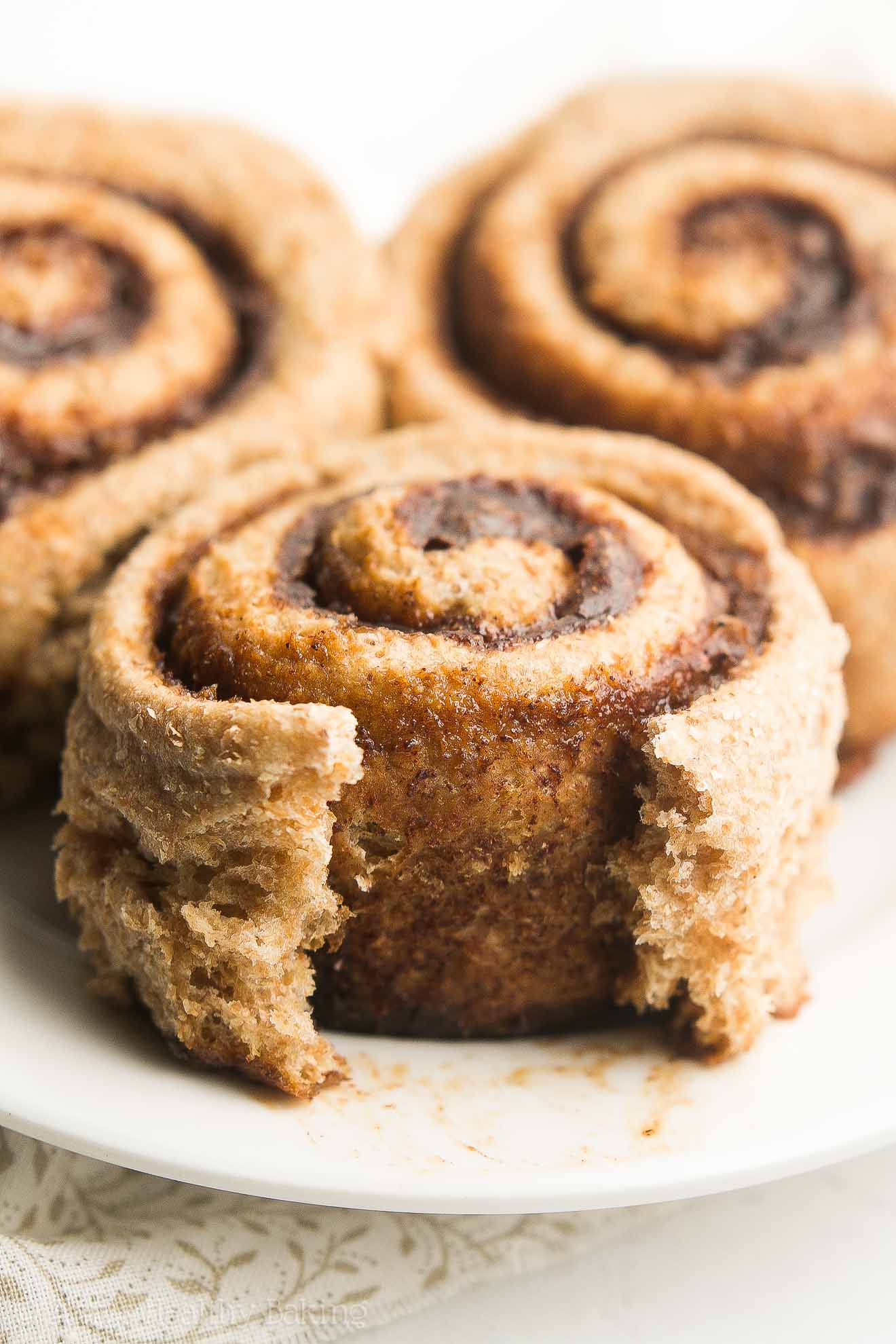 Perfection! 😉 And when you make your own, remember to snap a picture and share it on Instagram using #amyshealthybaking and tagging @amyshealthybaking IN the photo itself! (That guarantees I’ll see your picture! 🙂 ) I’d love to see your healthy apple pie spice cinnamon rolls!

Click here to PIN the recipe and save it for later!
Yields: 12 cinnamon rolls
These cinnamon rolls are one of my family’s favorite breakfast treats! They’re perfectly tender, and that gooey apple pie spice filling is absolutely irresistible. Leftovers will keep for at least one week if stored in an airtight container in the refrigerator.
Notes: For a vegan version, substitute your favorite non-dairy milk and Earth Balance buttery sticks in place of the butter. Coconut oil will also work in place of the butter, but it won’t have quite the same flavor and the yeast will not turn frothy in Step 2.

For the yeast, I use Red Star® Quick Rise Yeast. It performs the best out of any yeast I’ve used, so I highly recommend it! (Their regular active dry yeast works just as well too!) Read the blog post above for more information!

For the whole wheat flour, I use Gold Medal Whole Wheat Flour. It performs the best out of any whole wheat flour that I’ve used, so I highly recommend it! It ensures that your cinnamon rolls fully double while rising in Step 6, whereas some other brands barely rise at all. (I also like Bob’s Red Mill whole wheat flour, but it isn’t as easy to find in grocery stores!) Read the blog post above for more information!

I highly recommend using a silicone baking mat and a silicone rolling pin to roll out the dough in Step 5. (← Those are the inexpensive ones that I own {just the rolling pin in black}, and they’re worth every penny!) The silicone material prevents the dough from sticking to both your work surface and your rolling pin, and it makes the whole process go so much faster!

The Healthier Chocolate Treats cookbook is perfect for any and all chocolate lovers. Whether you enjoy chocolate occasionally or every single day (that’d be me!), there are plenty of goodies inside for you! Healthier Chocolate Treats contains 50+ brand new healthier recipes. These recipes have never been seen before or appeared on my blog. You won’t find them anywhere else! And yes—every single one contains some form of chocolate. Whether you prefer milk, dark or white, there are lots of treats inside for you!     What Inspired You to Write Healthier Chocolate Treats? I have always loved chocolate. Every Halloween throughout my childhood, I inverted the entire contents of my bright orange jack-o-lantern bucket … END_OF_DOCUMENT_TOKEN_TO_BE_REPLACED