A skinny pumpkin cinnamon roll recipe with a special decadent chocolate filling! Made with no refined flour or sugar & just 113 calories! 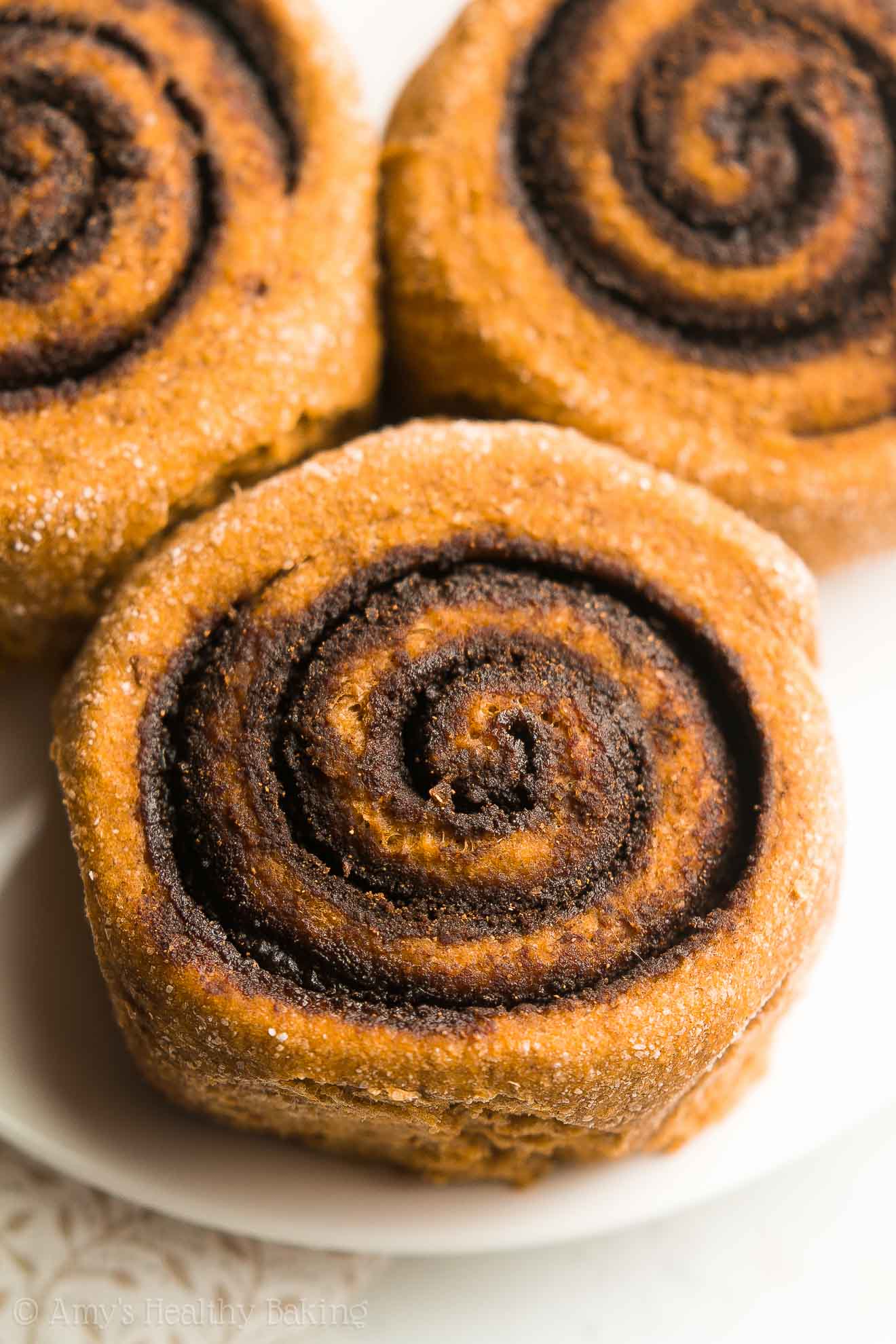 During the first week of September, I stopped by the grocery store located about a mile from my house to pick up a few ingredients for recipes I planned to make. After placing a few carrots (for these muffins) and raisins (for these amazing cookies) in my cart, I pushed it over to the baking aisle.

At that supermarket, stereotypical baking ingredients like flour and sugar take up the entire right side of the aisle, while baking equipment, including cake pans and cooling racks, along with canned fruits and vegetables fill up the left side shelves. I grabbed a bag of my favorite white whole wheat flour before turning and squatting down to reach for a few cans of pumpkin purée on the bottom shelf. But… 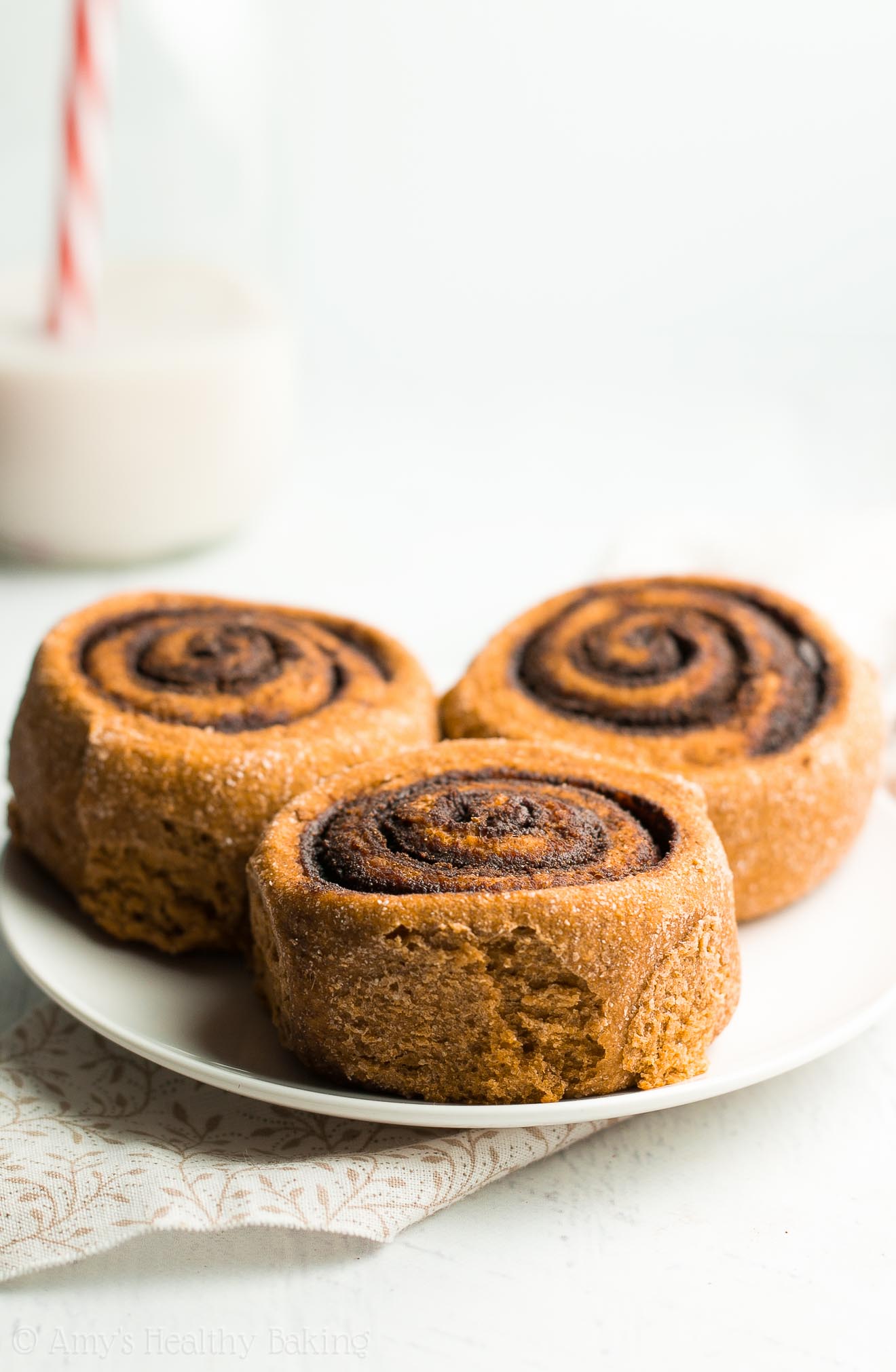 I wheeled my cart to the next aisle, where I found an employee, and politely inquired where they had stocked the pumpkin purée in the store. “Oh, we won’t get that in until late September,” she replied.

My jaw nearly dropped straight to the floor. The Halloween candy had been out on countless displays, including a few right at the entrances, since the 4th of July… But no pumpkin until almost October?? 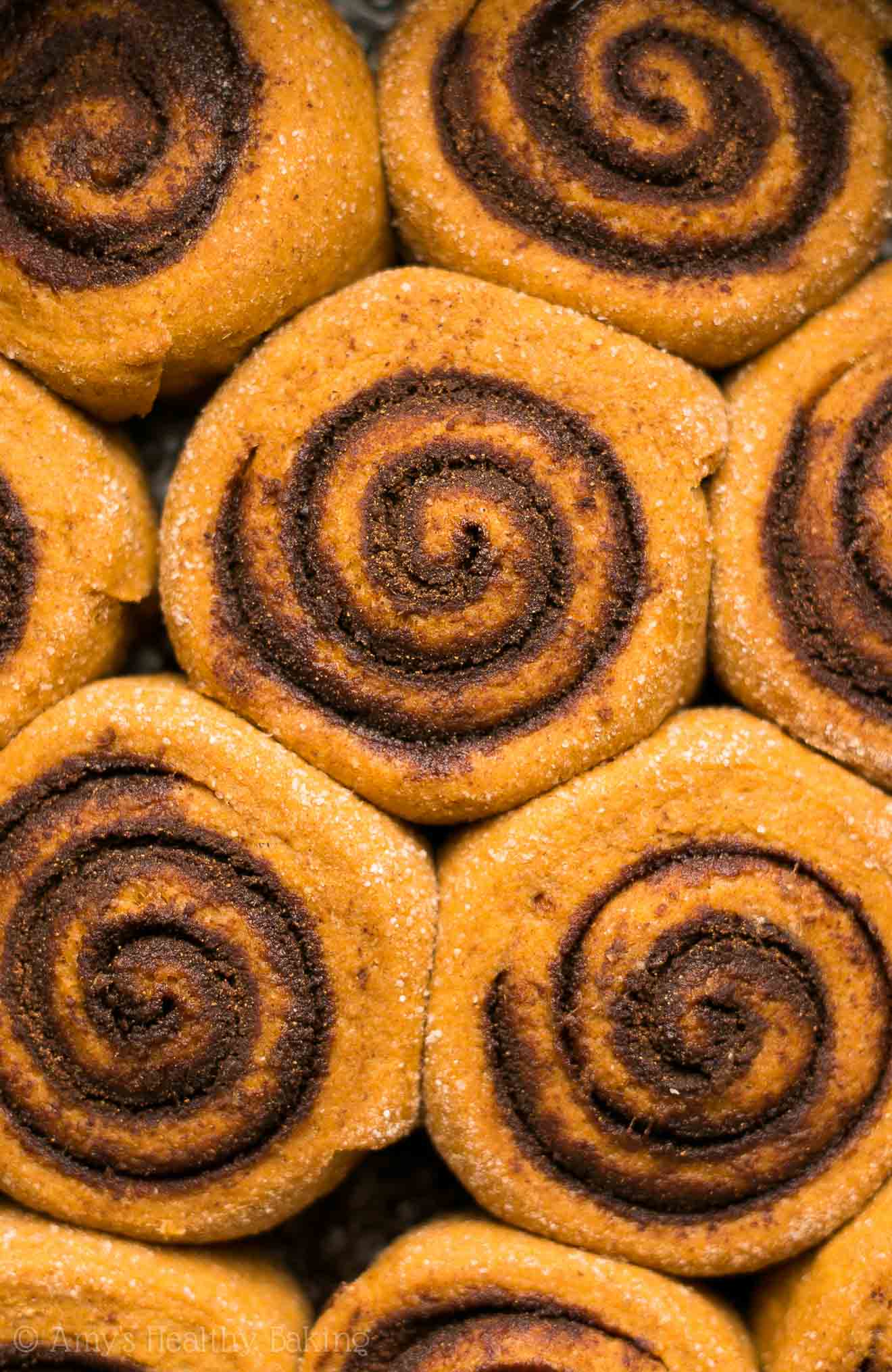 I paid for the groceries in my cart, dropped them off at home, and then drove all over town in search of canned pumpkin. With eight new pumpkin recipes for you on my calendar for September, plus four pumpkin recipe videos (here, here, here, and here… have you watched any of those yet?), I desperately needed pumpkin purée!

I finally found it at Target, and I nearly bought out their entire inventory. It lasted until the final week of September, when I visited that grocery store again… And discovered a few cans on their shelf! 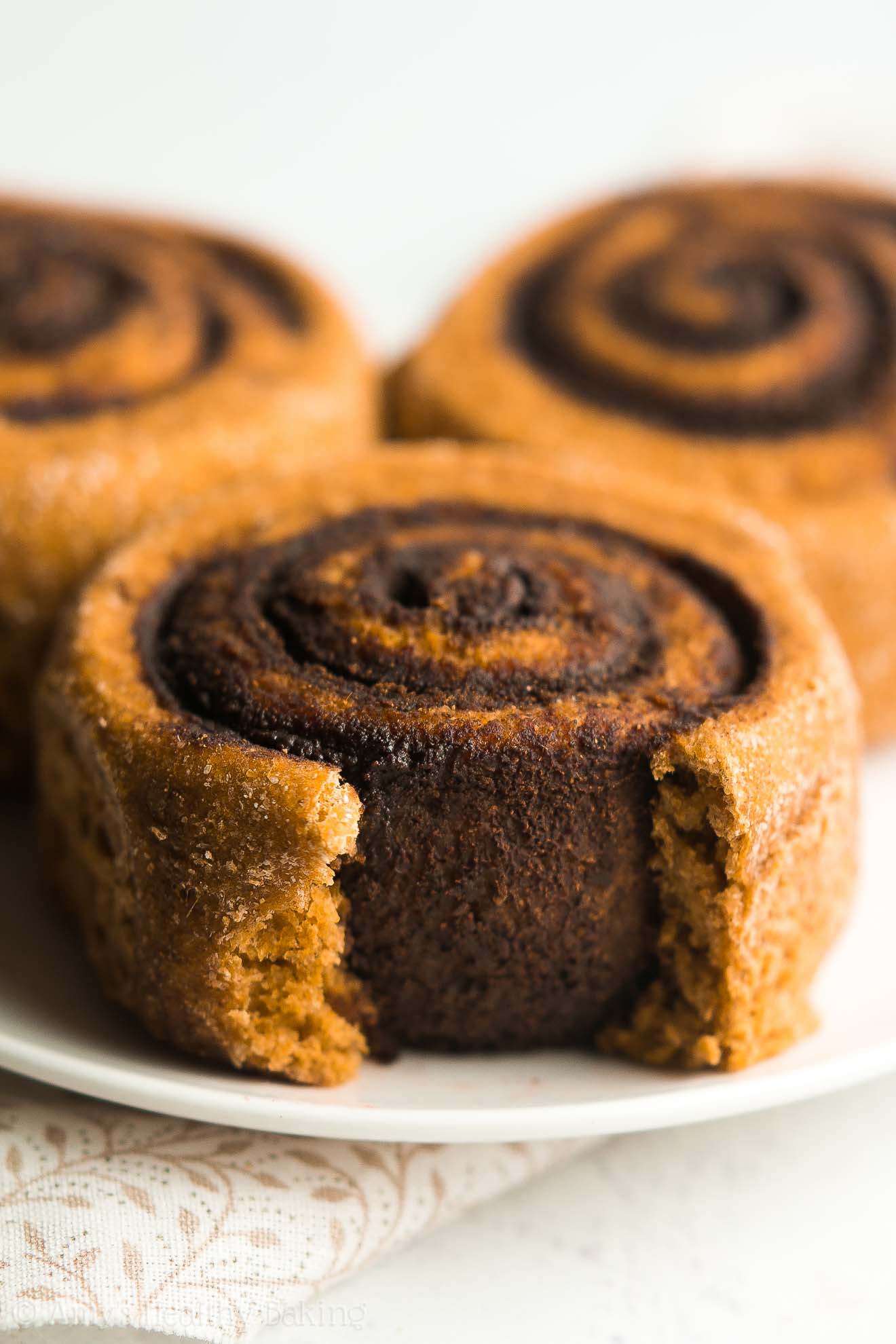 After returning home with my prized pumpkin, these Healthy Chocolate Pumpkin Cinnamon Rolls were the first recipe I made, and they were completely worth the wait (and hassle)! Mesmerizing swirls of decadent chocolate cinnamon filling surrounded by tender pumpkin dough… All for just 113 calories! 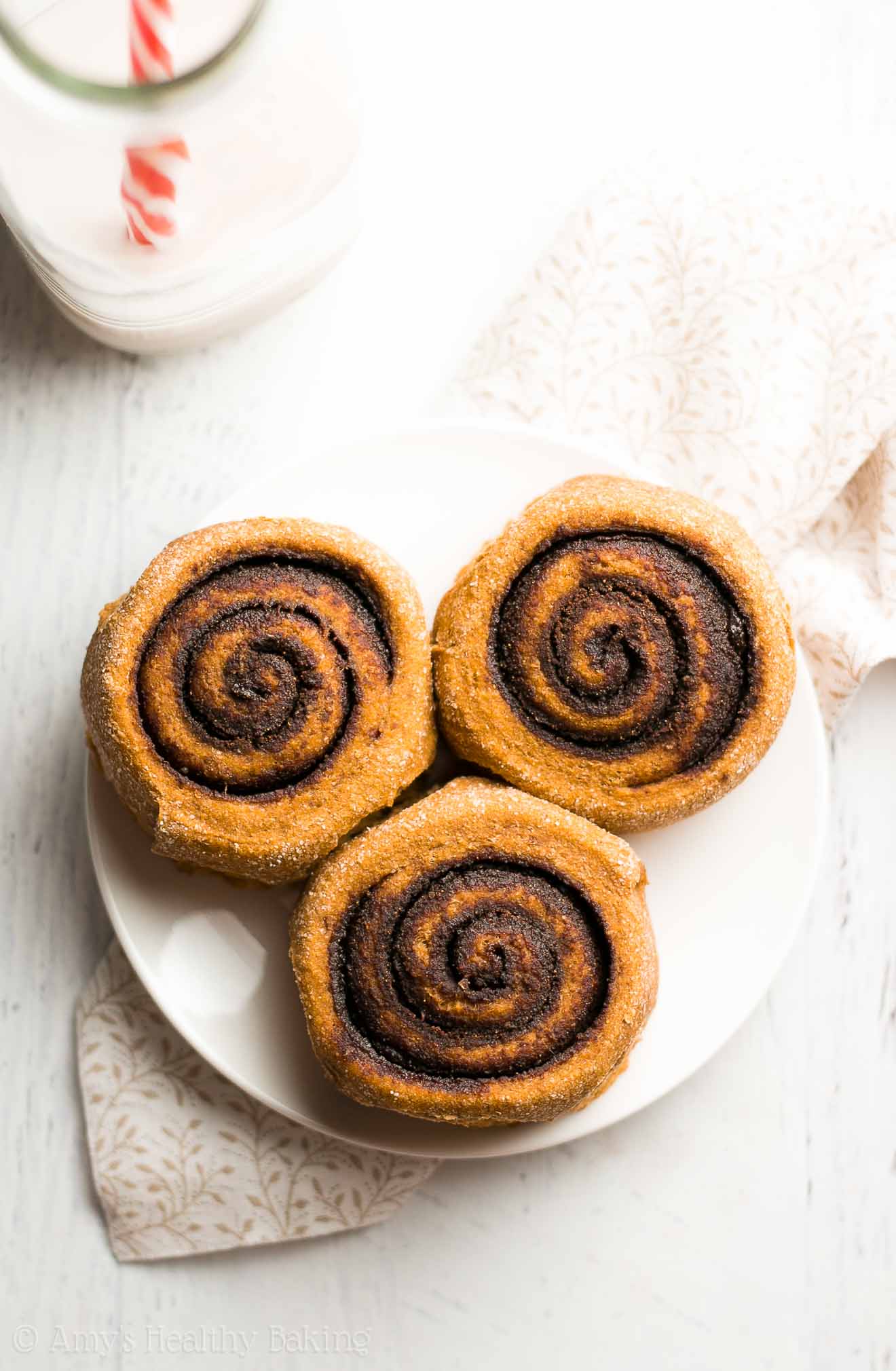 Although this recipe uses yeast, I promise it’s nothing to be afraid of! My dad first taught me to bake with yeast when I was about 8 years old, and if I could do it as a young girl, I know you can do it too!

To start, you’ll mix together a little warm milk, coconut sugar, melted butter, salt, and yeast. This is the yeast that I buy, and it performs the best out of any brand that I’ve tried. I highly recommend it! Both their quick-rise yeast and regular active dry yeast will work in this recipe.

You’ll let that mixture sit for about 15 minutes to “wake up” the yeast (or as my dad calls it, the “yeasties!”). It should start to look slightly foamy, but because we’re using so little milk, it won’t look quite as foamy as when you make my classic healthy cinnamon rolls. 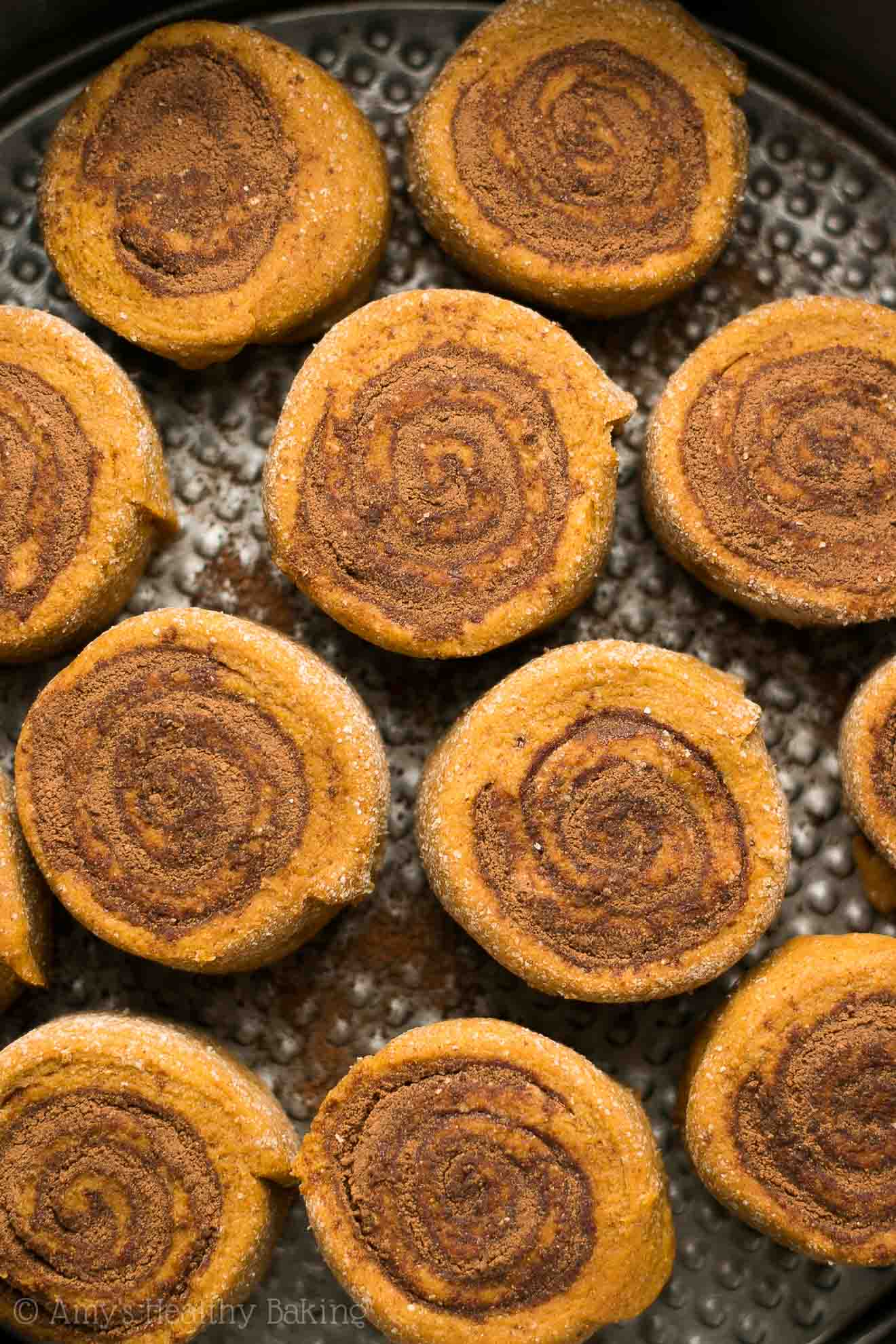 Next, you’ll mix in the pumpkin purée. Remember to buy regular pumpkin purée, not pumpkin pie mix! The latter contains refined sugar, which we’re avoiding in this healthier recipe. Instead, you’ll use coconut sugar, which is exactly what it sounds like… Sweetener that’s harvested from coconuts! It does not actually taste like coconuts though. It has a rich, almost caramel-like flavor like brown sugar, and it has the same pourable consistency as granulated sugar. Many mainstream grocery stores have started to stock it, and you can also buy it online. 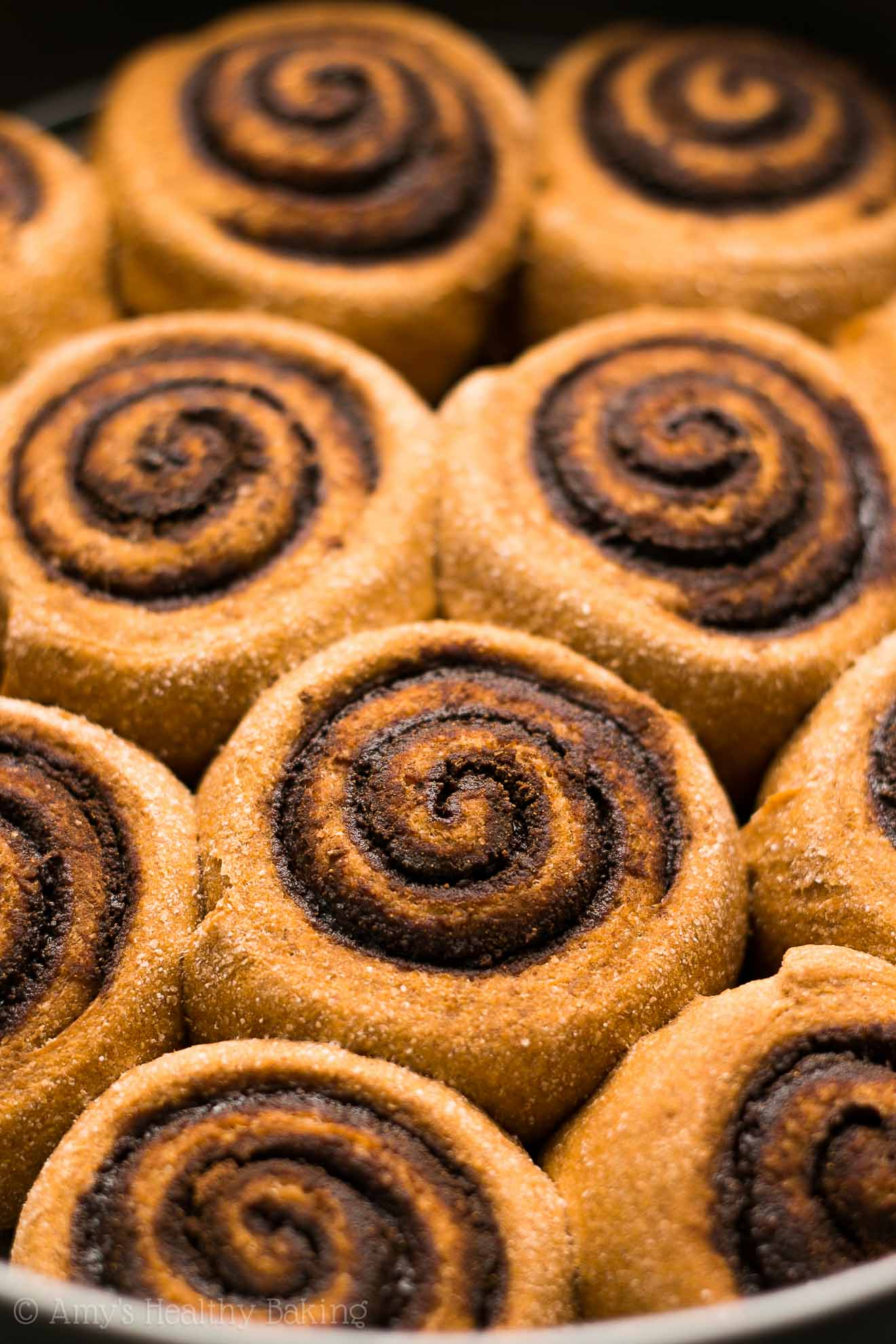 After kneading the dough and rolling it out (watch my video here above the recipe for tips on how to knead!), you’ll brush the top with a tiny bit of melted butter before sprinkling with the filling. The filling is a combination of coconut sugar, cocoa powder, and cinnamon. Just use regular unsweetened cocoa powder! Don’t substitute Dutched or special dark because the chocolate flavor of those types would mask the pumpkin taste.

Then roll up the dough, slice it with my special trick in this same video, let the rolls rise, pop them in the oven, and… 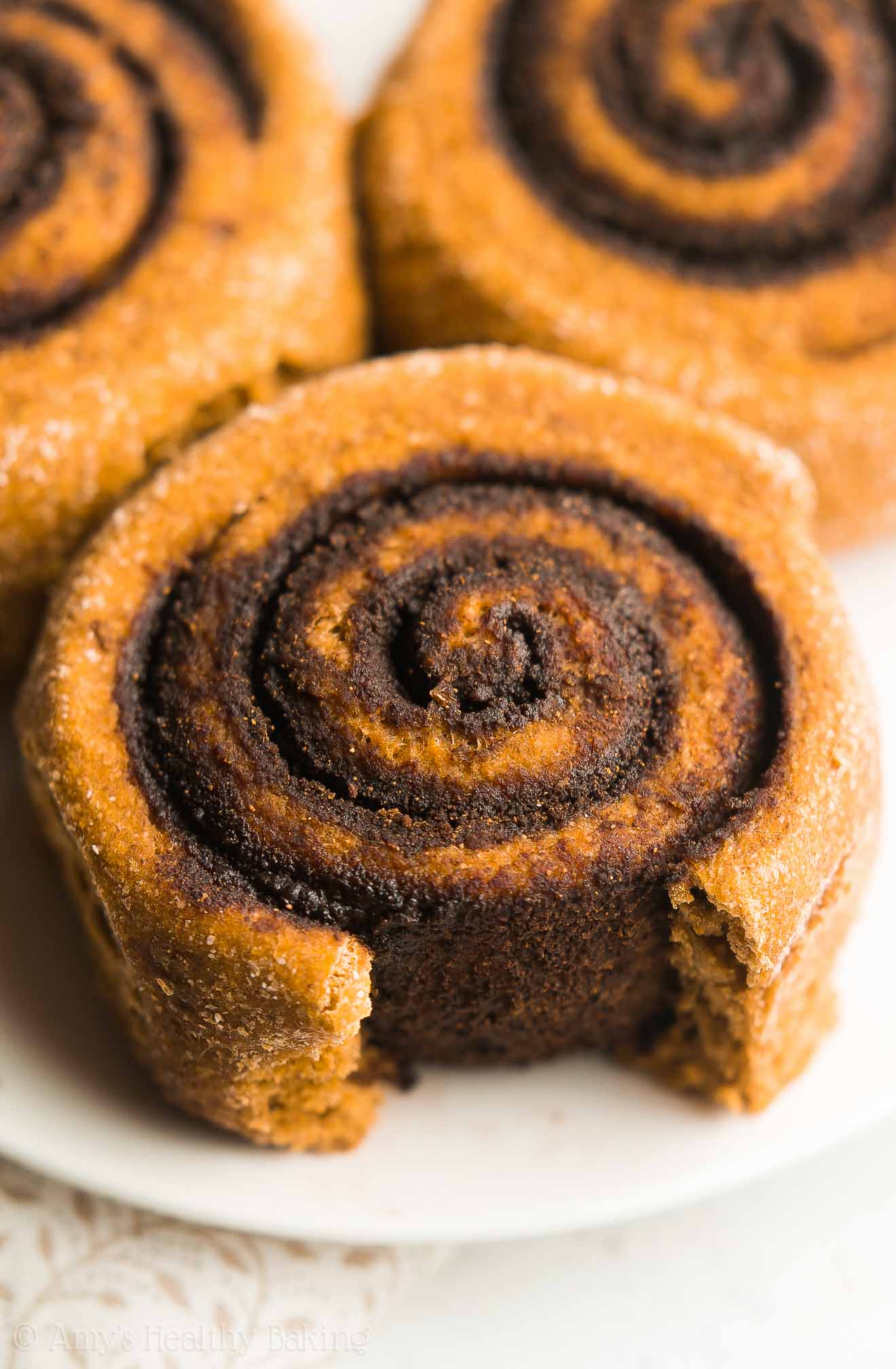 Yummmmmmmmmm. ?? And when you make your own, remember to snap a picture and share it on Instagram using #amyshealthybaking and tagging @amyshealthybaking IN the photo itself! (That guarantees I’ll see your picture! ?) I’d love to see your cinnamon rolls and feature them in my Sunday Spotlight series!

Click here to PIN the recipe and save it for later!
Yields: 12 cinnamon rolls
These cinnamon rolls are the perfect cozy autumn breakfast treat! The tender pumpkin dough surrounding the rich chocolaty cinnamon filling is an absolutely irresistible combination. Leftover cinnamon rolls will keep for at least five days if stored in an airtight container in the refrigerator.
Notes: For a vegan version, substitute your favorite non-dairy milk and Earth Balance buttery sticks in place of the butter. Coconut oil will also work in place of the butter, but it won’t have quite the same flavor and the yeast will not turn frothy in Step 2.

For the yeast, I used Red Star Quick Rise Yeast. It performs the best out of any yeast I’ve used, so I highly recommend it! Regular active dry yeast will work as well.

Whole wheat pastry flour, regular whole wheat flour (I prefer this brand for yeast-based recipes), or all-purpose flour may be substituted for the white whole wheat flour. I haven’t tried with gluten-free flours and don’t know how they’ll turn out since gluten-free yeast baking can be finicky.

I do not recommend substituting Dutched or special dark cocoa powder for the unsweetened cocoa powder. Their flavor will overwhelm the pumpkin taste.

I prefer a 9"-round springform pan because the sides are taller, which allows the rolls to rise higher, and the sides are removable for easy serving. A regular 9”-round cake pan may be used instead.

I highly recommend reheating leftover cinnamon rolls in the microwave! It makes the filling melt a little and turn gooey, and it tastes like melted chocolate!

The Healthier Chocolate Treats cookbook is perfect for any and all chocolate lovers. Whether you enjoy chocolate occasionally or every single day (that’d be me!), there are plenty of goodies inside for you! Healthier Chocolate Treats contains 50+ brand new healthier recipes. These recipes have never been seen before or appeared on my blog. You won’t find them anywhere else! And yes—every single one contains some form of chocolate. Whether you prefer milk, dark or white, there are lots of treats inside for you!     What Inspired You to Write Healthier Chocolate Treats? I have always loved chocolate. Every Halloween throughout my childhood, I inverted the entire contents of my bright … END_OF_DOCUMENT_TOKEN_TO_BE_REPLACED