A quick & easy recipe for the best cinnamon rolls I’ve ever eaten & they’re just 105 calories! One woman said they tasted like they came from a bakery and that she’d pay for them—they’re that good! 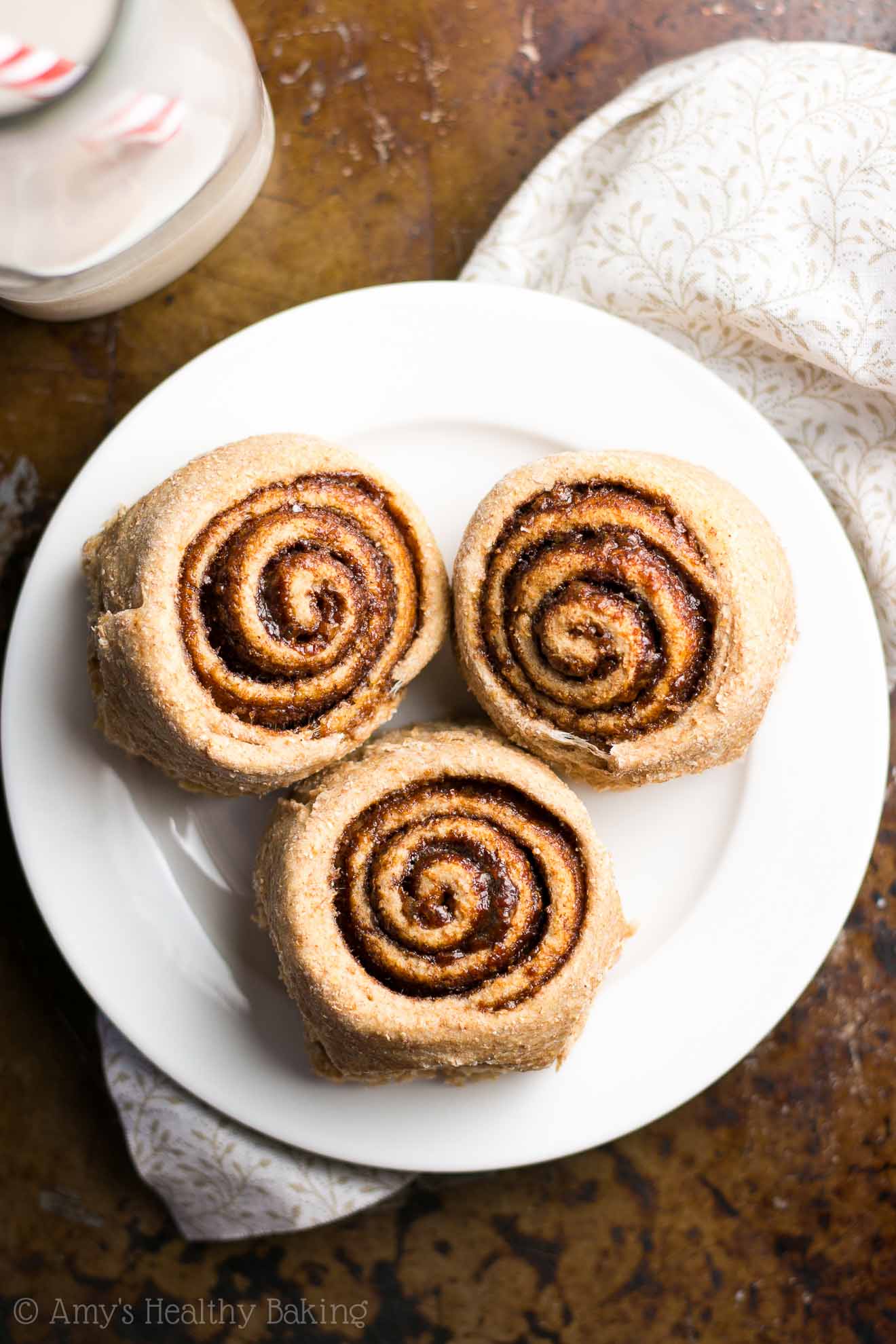 During graduate school, I woke up one Saturday morning craving cinnamon rolls. As I rolled out of bed, slipped into workout clothes, and laced up my running shoes, visions of cozy spiced spirals filled my head, and I thought about that airy, buttery dough encasing them as my feet pounded the pavement on my 4-mile route around the neighborhood.

When I arrived back home and started stretching my legs to cool down, I tried distracting myself by listing the other available breakfast options in my pantry and fridge: my favorite Trader Joe’s cereal, oatmeal, English muffins, eggs, bread for toasting, plenty of Greek yogurt and fresh fruit… 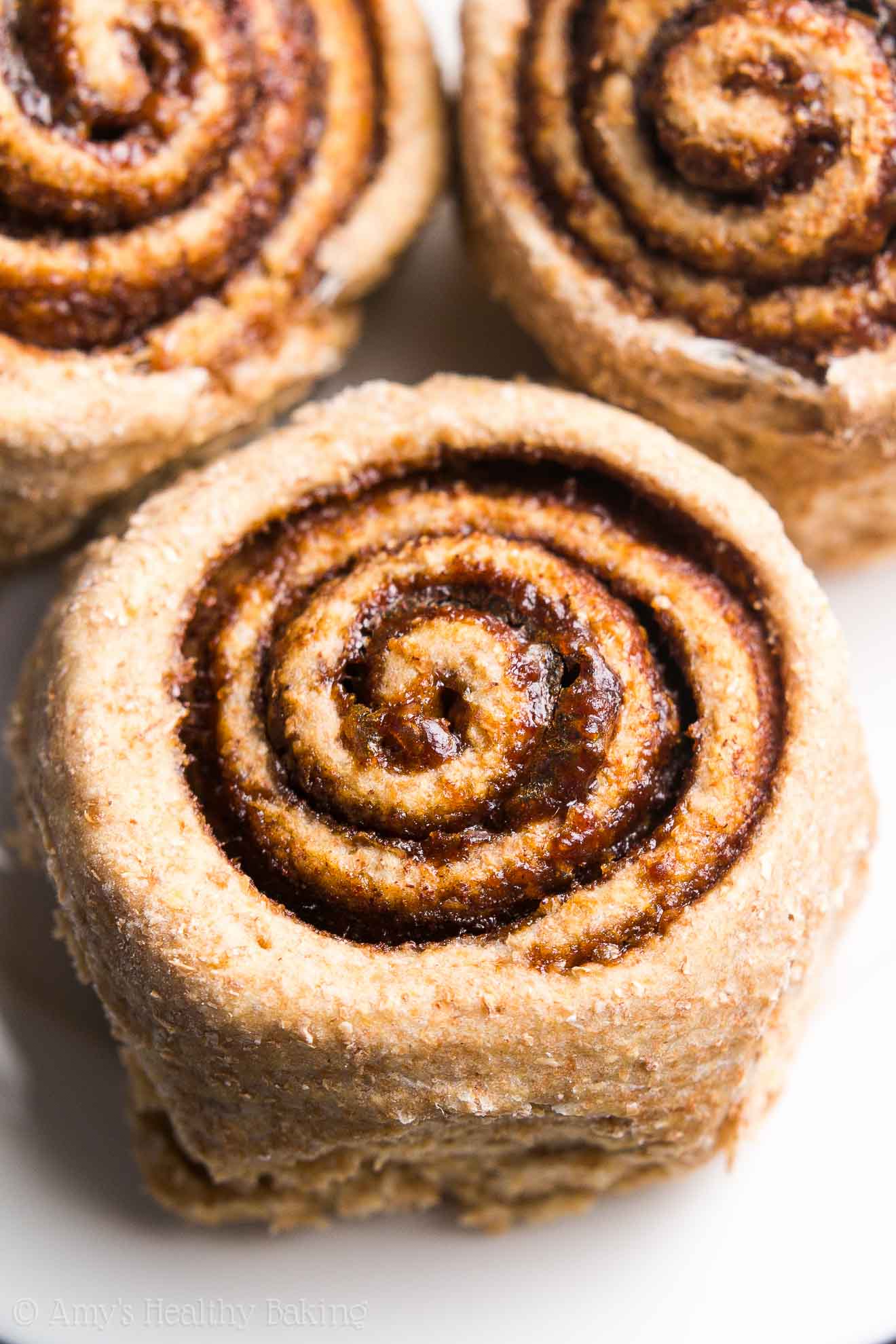 But my out-of-control craving won in the end, so I flicked on the oven to preheat while I rushed through my shower. After throwing on clean clothes, I cracked open a can of refrigerated cinnamon rolls—when my cravings spiral out of control like that, I can’t wait two more hours to proof yeast and kneed dough and wait for it to rise… I need those cinnamon rolls right now!—and popped them in to bake.

By the time I finished responding to my organic chemistry undergraduate students’ emails (yes, I was {and still am} a science nerd!), I heard the timer ringing in the kitchen, and I sprinted through the house to slip the pan out of the oven. Just a few minutes later, I tore into the first one… Light, tender, buttery, with mesmerizing spirals of cinnamony goodness… And reached for another.

I almost always skip the icing on top… By skipping those calories, it’s how I justify eating a second cinnamon roll! 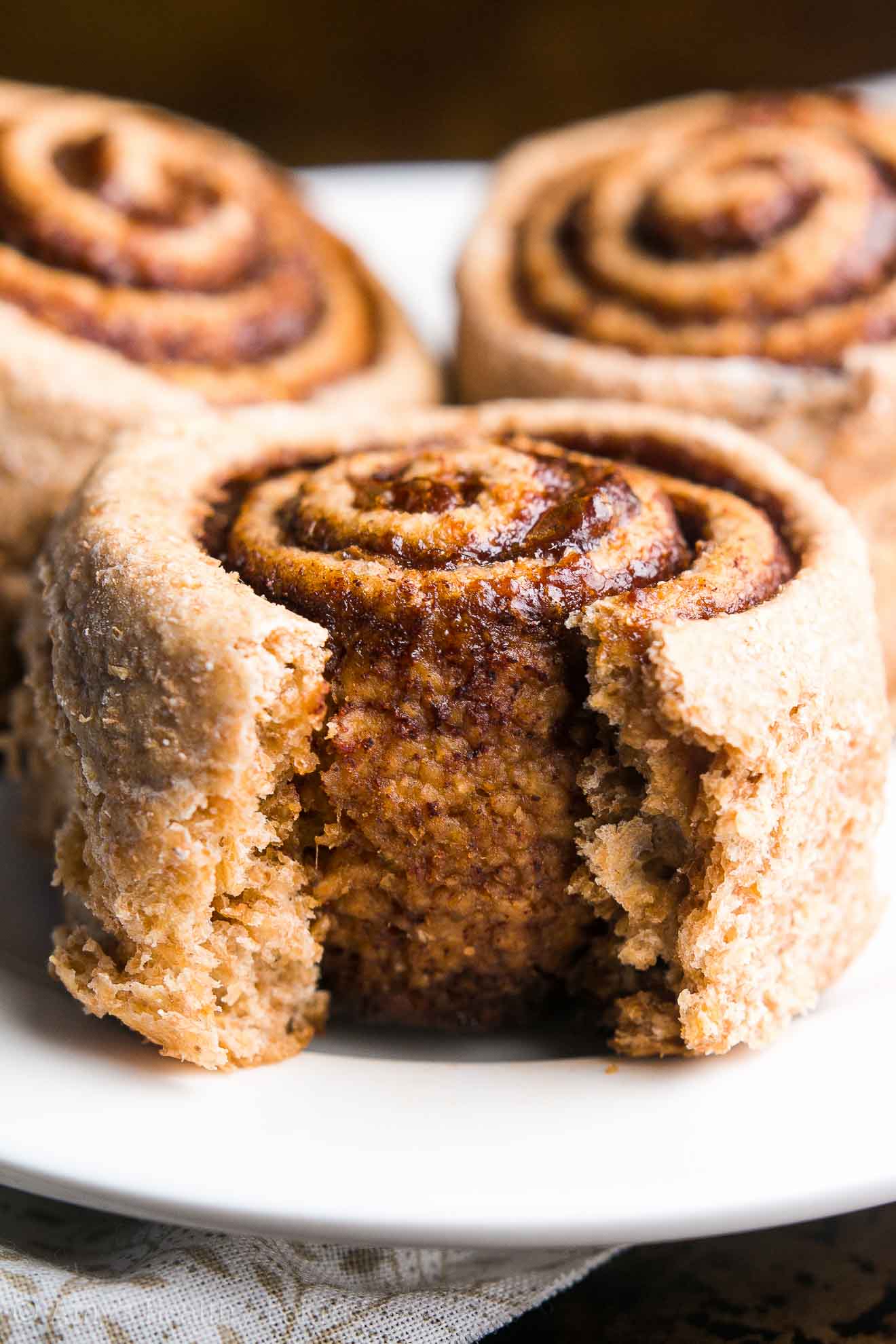 But now, I’m much more conscientious about the ingredients in the foods I eat, and I avoid those store-bought refrigerated cans of cinnamon rolls. So when that same overwhelming craving returned last week, I developed this 45-Minute Healthy Cinnamon Rolls recipe as a result!

They’re just as light and tender and full of the same cozy cinnamon spirals, but… They contain absolutely no artificial ingredients, refined flour or sugar! And when I sent some to work with my mom, one lady exclaimed that they tasted as if they came straight from a bakery—and that she’d gladly pay for them!

My heart nearly melted. That’s the best sort of compliment! 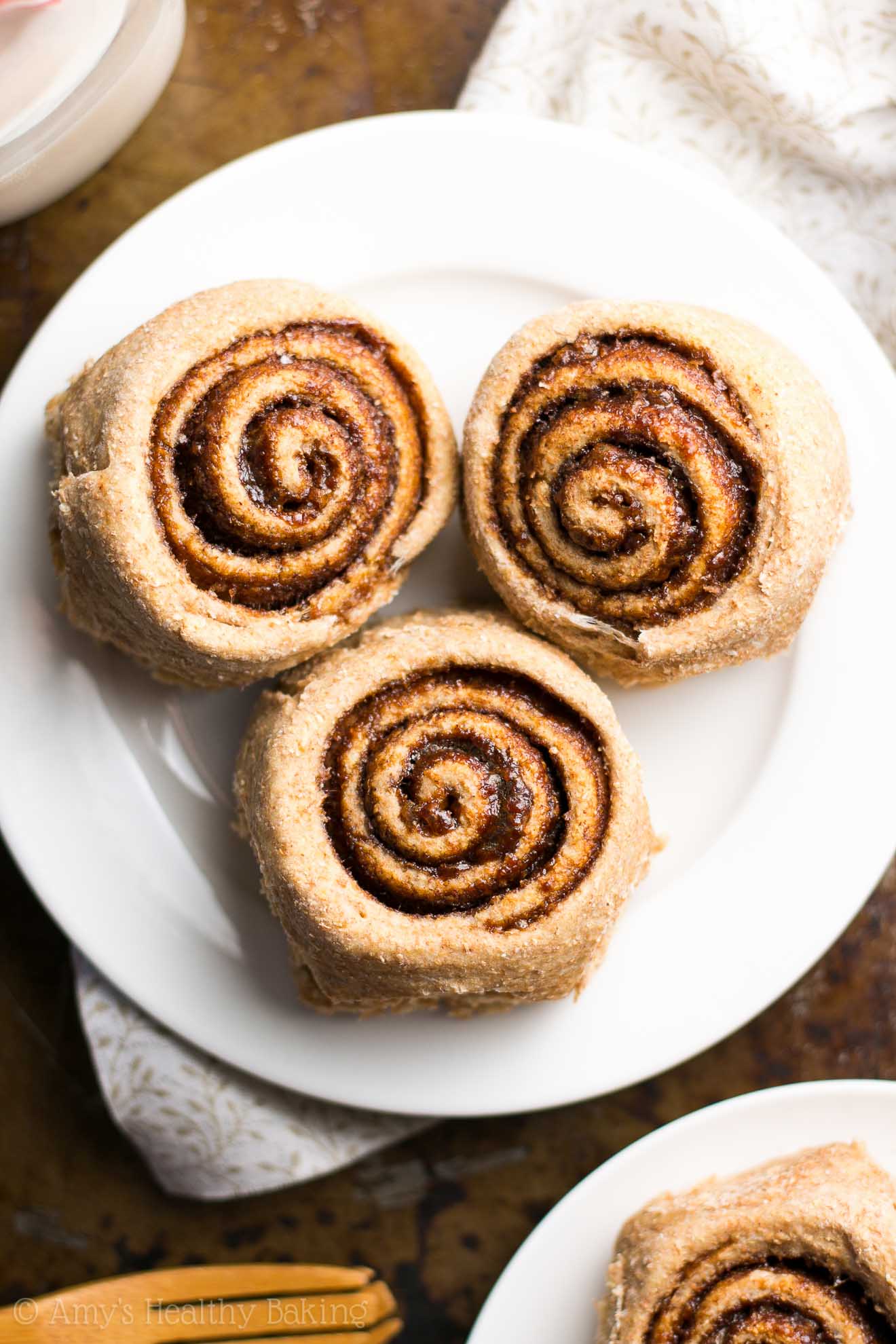 Next, you’ll use both yeast and baking powder. Traditional cinnamon roll recipes only include yeast because you give the dough time to rise before baking. However, we’re skipping that rising step today in order to get these cinnamon rolls on the table and in your belly much, much sooner… Which is where the baking powder comes in! It ensures that the cinnamon rolls rise as much in the oven as they would during the traditional rising step. It’s my secret trick to speedy cinnamon rolls, and it works like a charm!

As for the yeast, this is my all-time favorite. It’s the only kind I bake with! It performs perfectly in all of my yeast-based recipes, from cinnamon rolls and artisan bread loaves to pretzels and sweet rolls. It rises the best out of all the brands I’ve tried, so I highly recommend it! 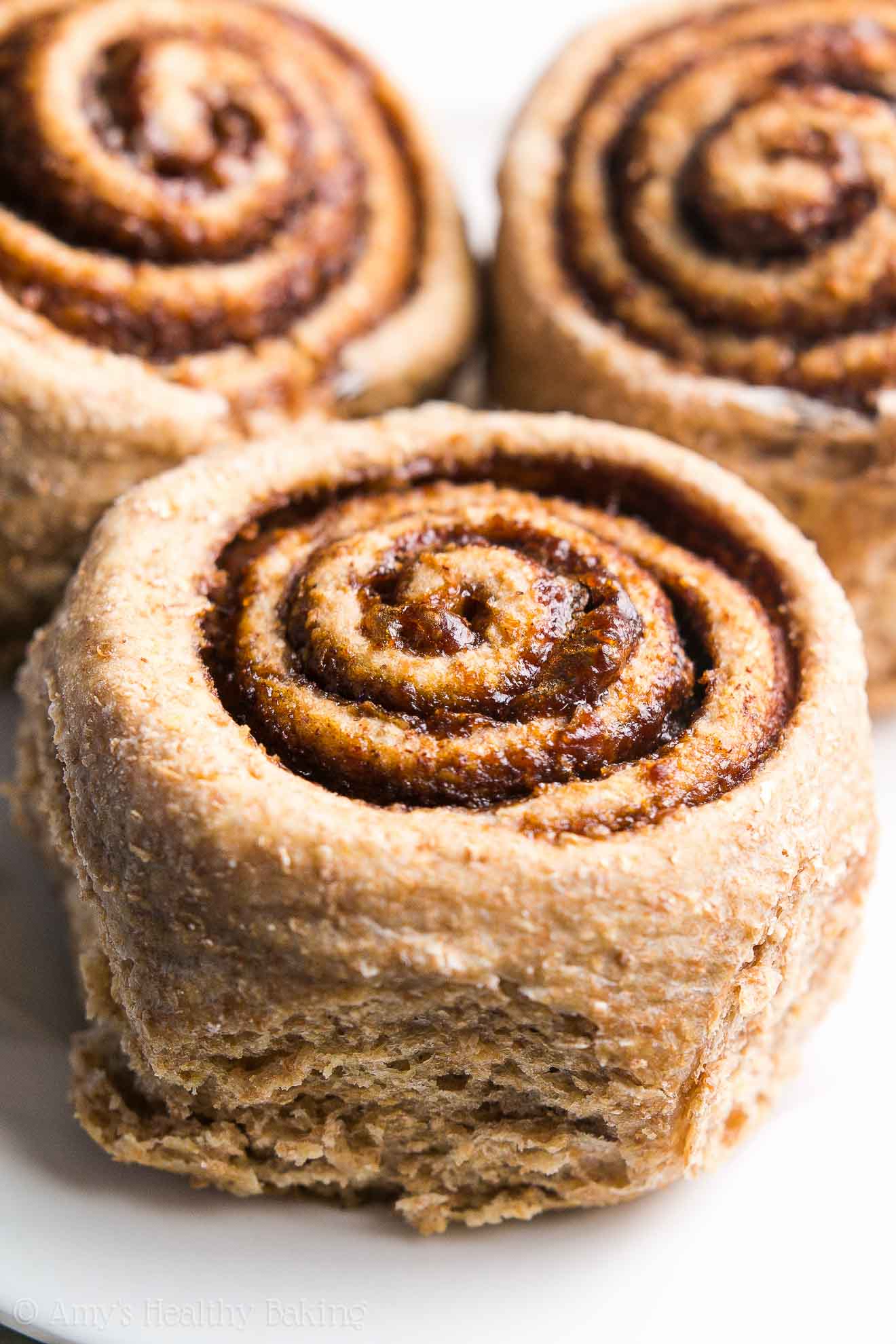 For the filling, you’ll lightly brush the dough with a little bit of melted butter—only a little, I promise! Just enough to taste and give your cinnamon rolls that irresistible richness, but not so much that you need to run a marathon to burn off hundreds of calories. Then you’ll sprinkle a mixture of cinnamon and coconut sugar on top.

Coconut sugar is exactly what it sounds like—sugar that comes from coconuts. However, it does not actually taste like coconuts! It has a caramel-like flavor, similar to brown sugar, but it has the same pourable texture as granulated sugar. You can find it at many standard grocery stores, health-oriented grocery stores, and online. 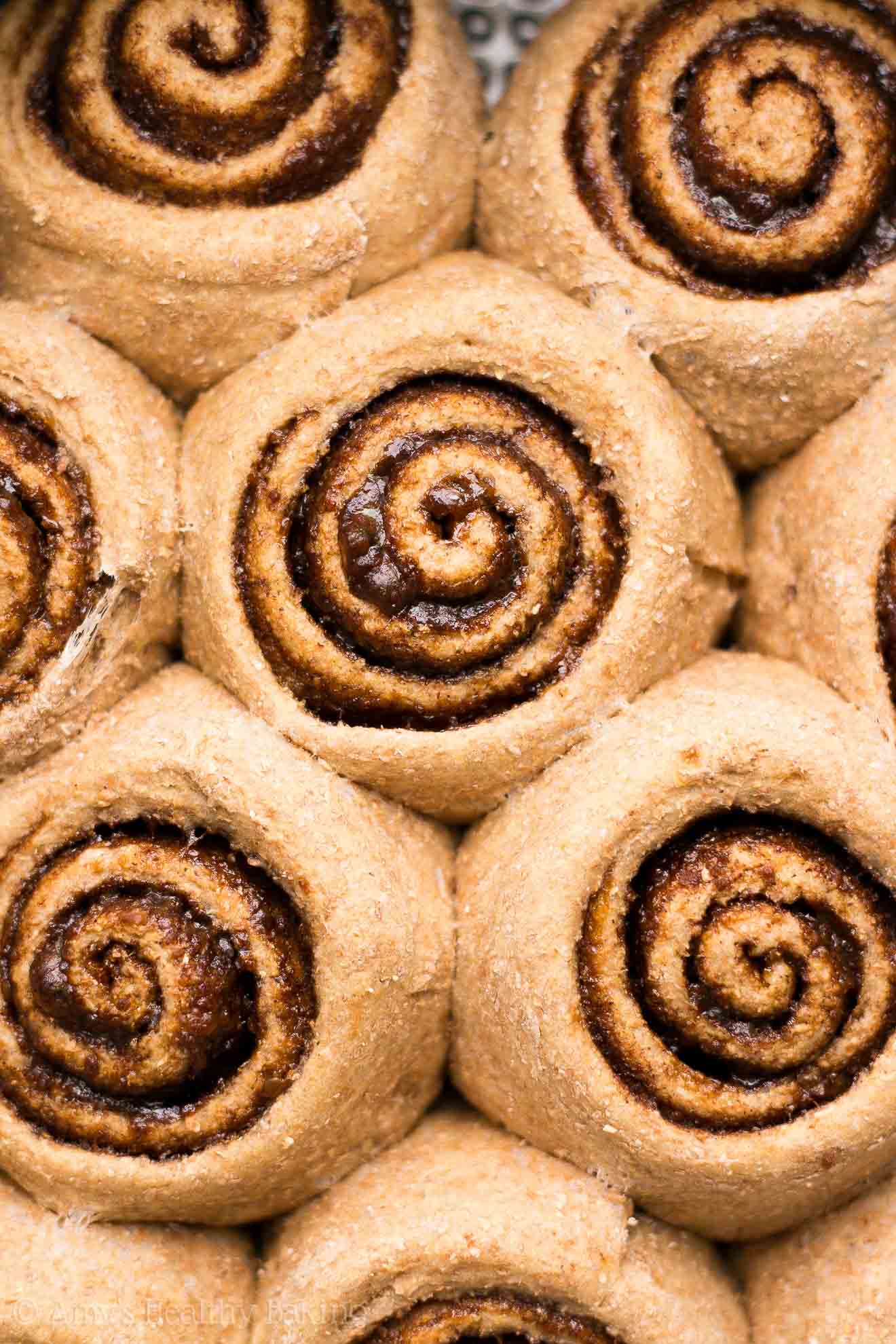 To slice the dough into individual rolls, you’ll use my special trick for perfectly round rolls… Dental floss! You can see exactly how I do that in this video here (located above the recipe). I know it sounds a little strange, but it’s much easier than using a knife! 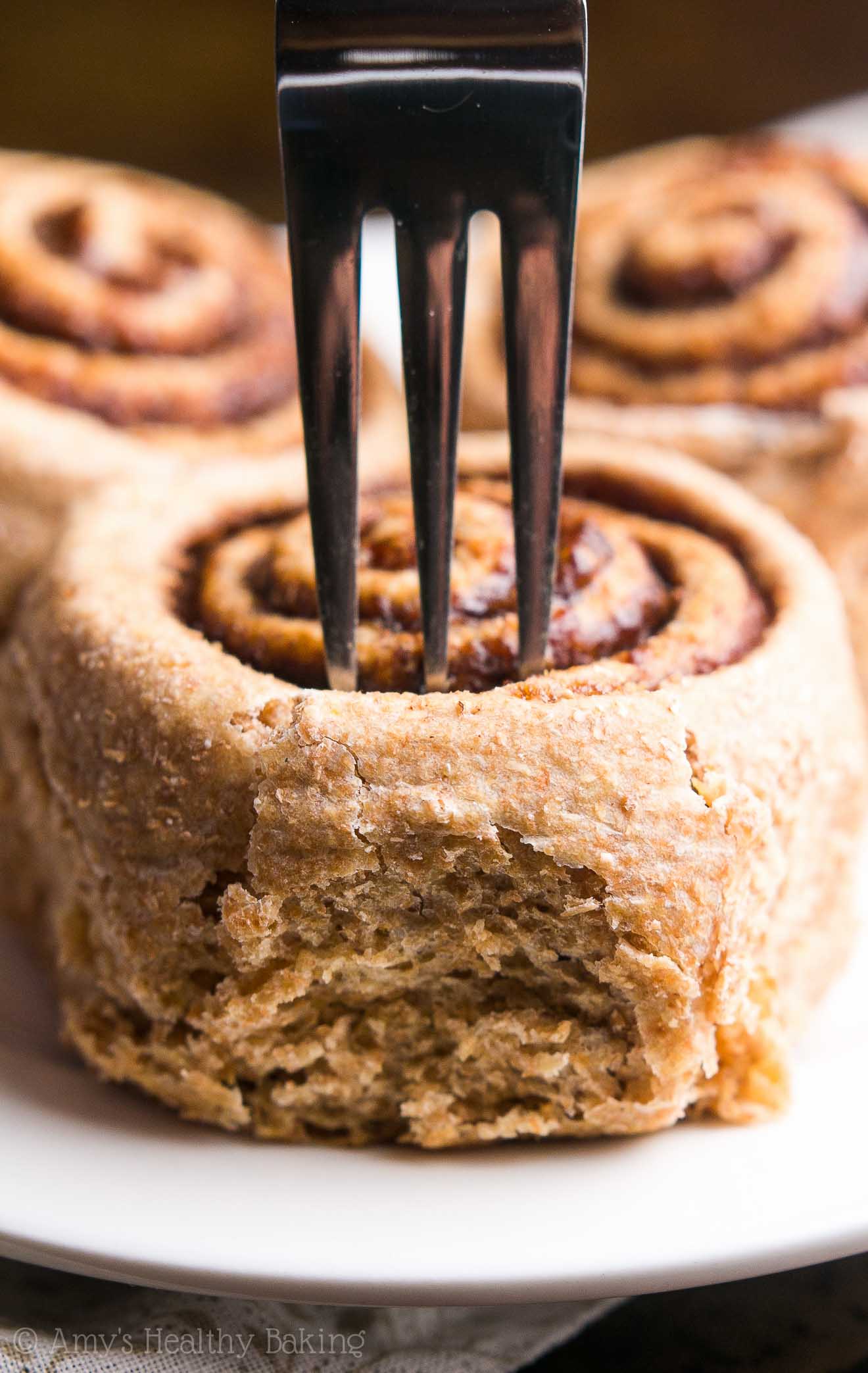 Enjoy! And when you make your own, remember to snap a picture and share it on Instagram using #amyshealthybaking and tagging @amyshealthybaking IN the photo itself! (That guarantees that I’ll see the notification from you! ?) I’d love to see your cinnamon rolls and feature them in my Sunday Spotlight series!

Click here to PIN the recipe and save it for later!
Yields: 12 cinnamon rolls
These quick and easy cinnamon rolls are my all-time favorites! I can never resist those cozy, cinnamony, perfectly sweet spirals. They’ll keep for at least 5 days if stored in an airtight container in the refrigerator.
Notes: The 45 minutes only includes the time it takes to complete the Instructions. It does not account for any time needed to assemble or measure the ingredients.

The Healthier Chocolate Treats cookbook is perfect for any and all chocolate lovers. Whether you enjoy chocolate occasionally or every single day (that’d be me!), there are plenty of goodies inside for you! Healthier Chocolate Treats contains 50+ brand new healthier recipes. These recipes have never been seen before or appeared on my blog. You won’t find them anywhere else! And yes—every single one contains some form of chocolate. Whether you prefer milk, dark or white, there are lots of treats inside for you!     What Inspired You to Write Healthier Chocolate Treats? I have always loved chocolate. Every Halloween throughout my childhood, I inverted the entire contents of my bright orange jack-o-lantern bucket … END_OF_DOCUMENT_TOKEN_TO_BE_REPLACED