Learn how to make healthy cinnamon rolls completely from scratch! They’re light & fluffy with a sweet chai-spiced filling. With how incredible they taste, it’s hard to believe they contain no refined flour or sugar & only 108 calories!
Click here to PIN the recipe and save it for later! 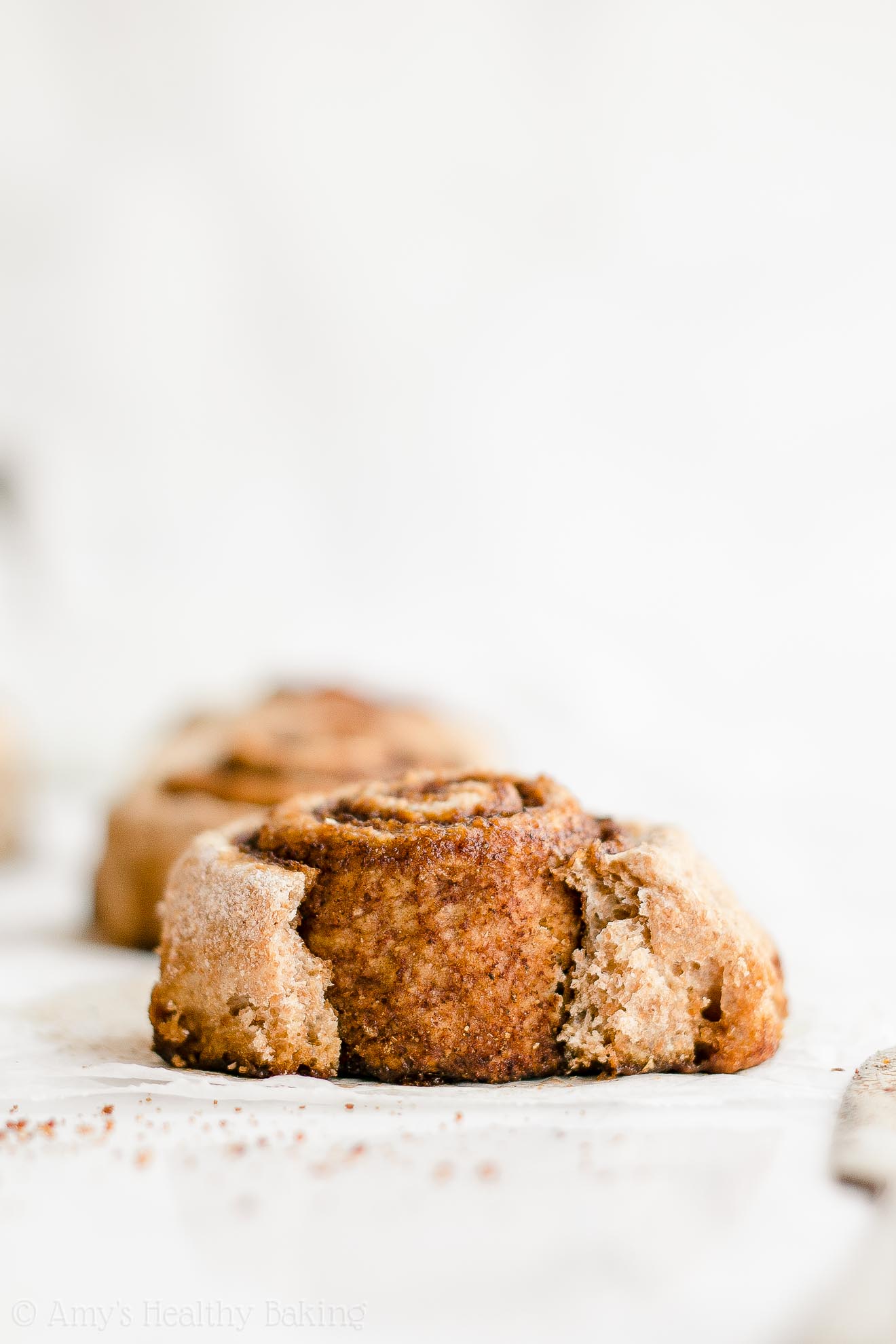 Last month, my mom flew to Southern California for a short business trip, and she extended her stay to spend the weekend with me. Although we took care of lots of little things around my house, like installing a drip watering system for my back patio, we still carved out time for fun, too.

On our first evening together, we drove to the beach to watch the sunset, and we stopped by Panera on the way. We asked for our order to go so we could eat dinner while at the beach, and as we waited for the kitchen to prepare our meal, Mom looked through the glass display case of pastries, searching for her favorite one… But since Panera was completely sold out of it, we left without any sweet treats. 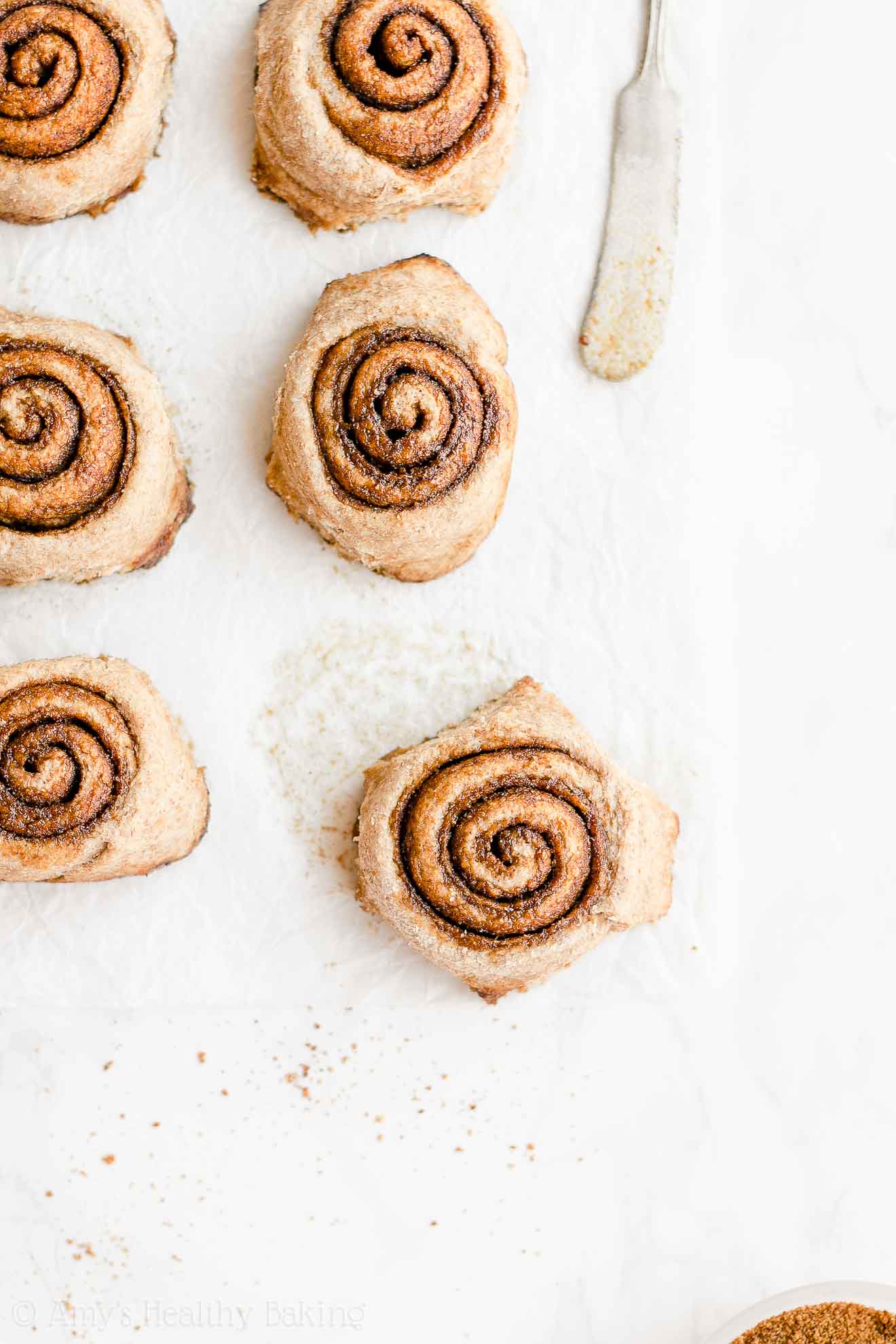 At the beach, we found a little rock ledge facing due west, and we sat there to unwrap our food and eat our casual dinner. We watched a couple of crabs scuttling back and forth on the sand, and we admired the deep dusty rose color staining the clouds as the sun sank beneath the horizon.

The very next day, we drove back to the beach for the sunset again, although we skipped Panera because we were running late… And the sunset never came because a thick layer of clouds completely covered the sky. Oops! 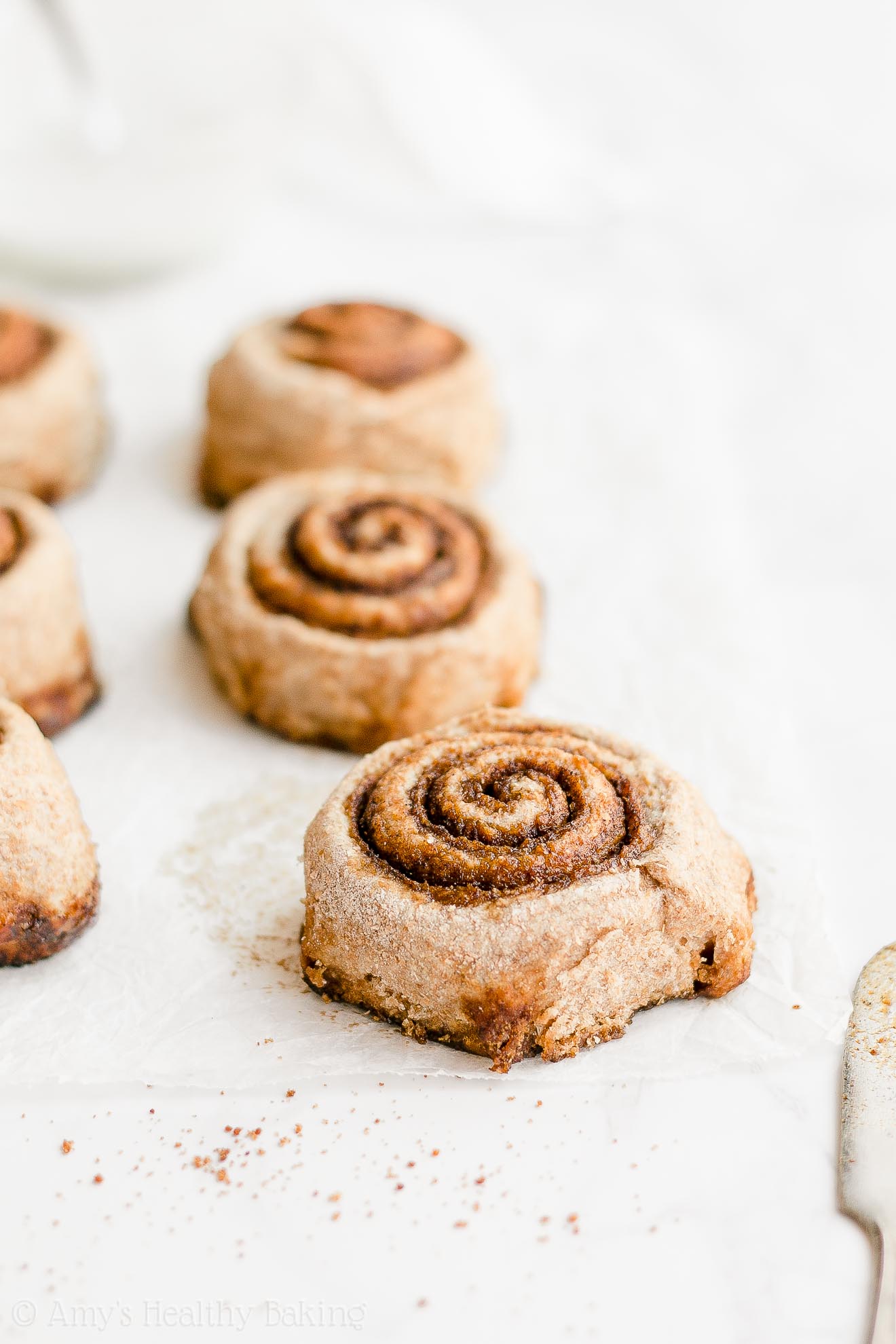 Although a little belated, our first dinner and beach night actually inspired me to bake these Healthy Chai Spice Cinnamon Rolls! Mom absolutely loves her morning chai ritual, so I took those same cozy spices and sprinkled them in these healthy cinnamon rolls. Yet unlike traditional recipes, these contain no refined flour or sugar, and they’re only 108 calories!

Definitely much healthier than any of the pastries in Panera’s display case! 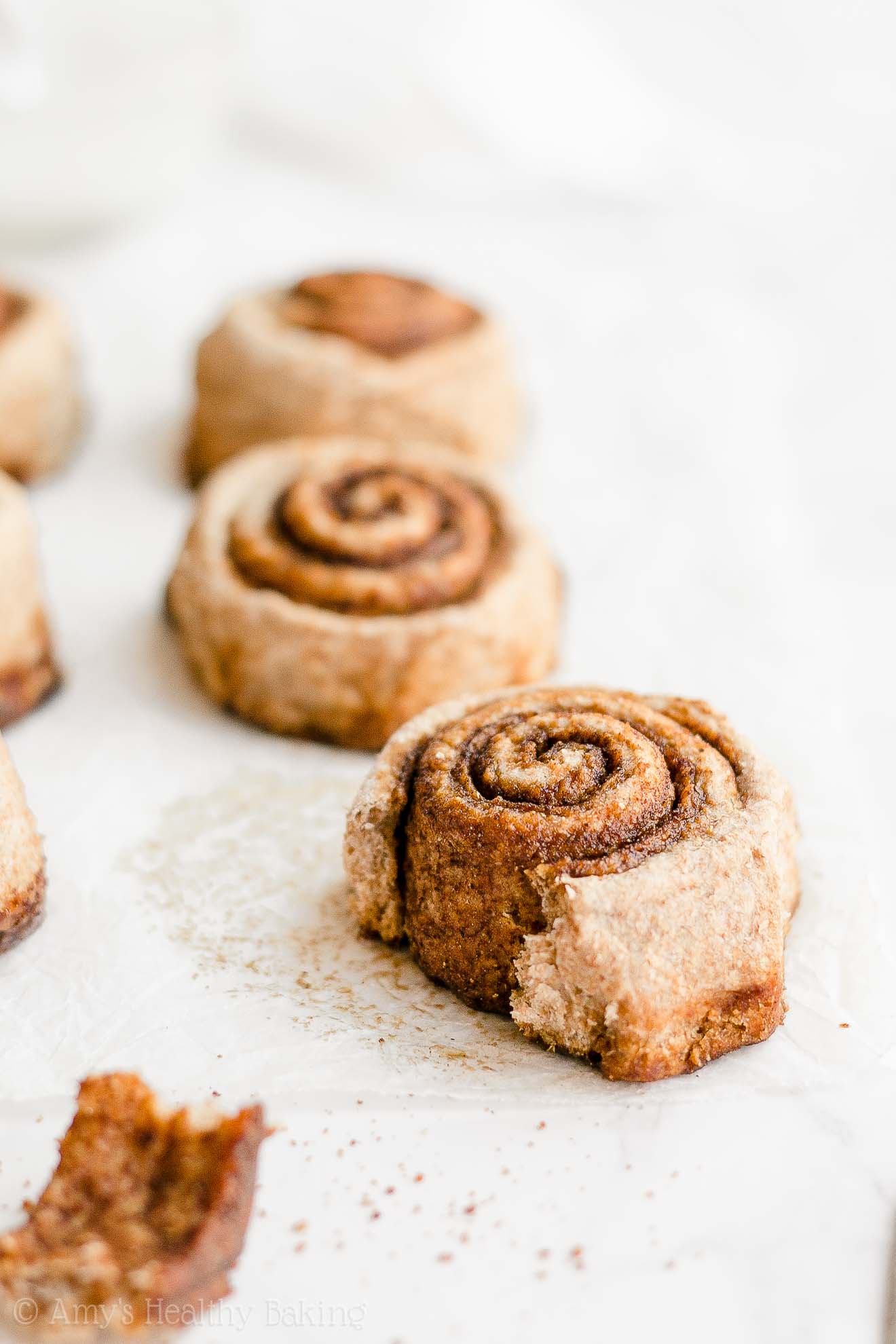 So let’s talk about how to make these healthy chai spice cinnamon rolls!

There are two key components to this recipe: the whole wheat flour and the yeast. Yes, this is a yeast-based recipe… But baking with yeast isn’t hard or scary—I promise! I started baking with yeast by the time I was eight years old, and if I could do it at that age, I know you can do it today! 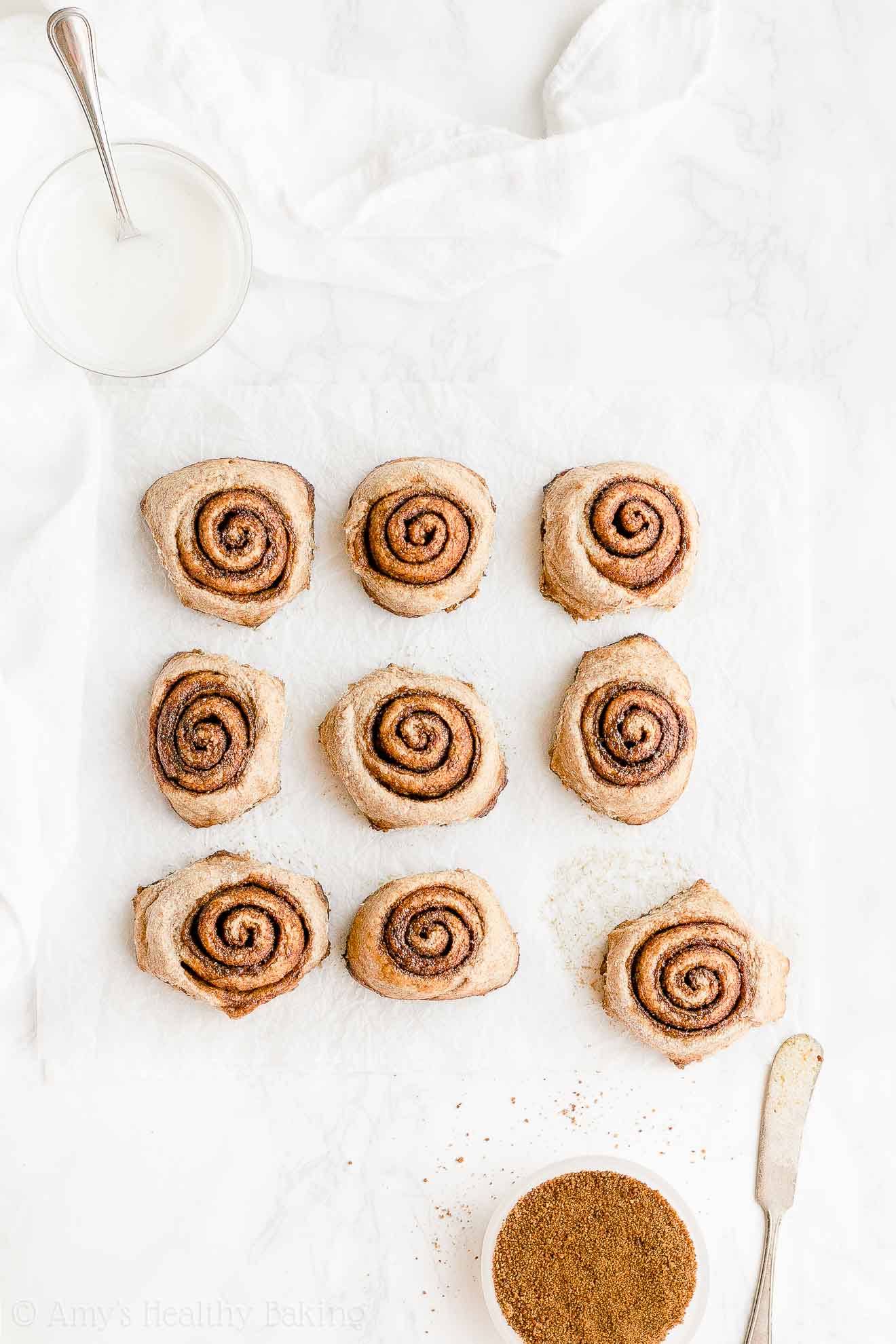 Especially if you use my favorite yeast! After baking with multiple different brands in lots of different yeast-based recipes, Red Star Yeast consistently performed the best, especially in cinnamon rolls. My healthy cinnamon rolls always rise at least double in size and turned out with the perfect light and fluffy texture. I’m obsessed!

And to achieve that tall and puffy perfection, I pair Red Star Yeast with Gold Medal whole wheat flour. I’ve also tested multiple different brands of flour in my yeast-based recipes, and Gold Medal flour always rises higher than others. Some brands don’t even rise at all!

So the moral of the story? If you want your healthy chai spice cinnamon rolls to be tall, light, and fluffy, use the combination of Red Star Yeast + Gold Medal whole wheat flour! 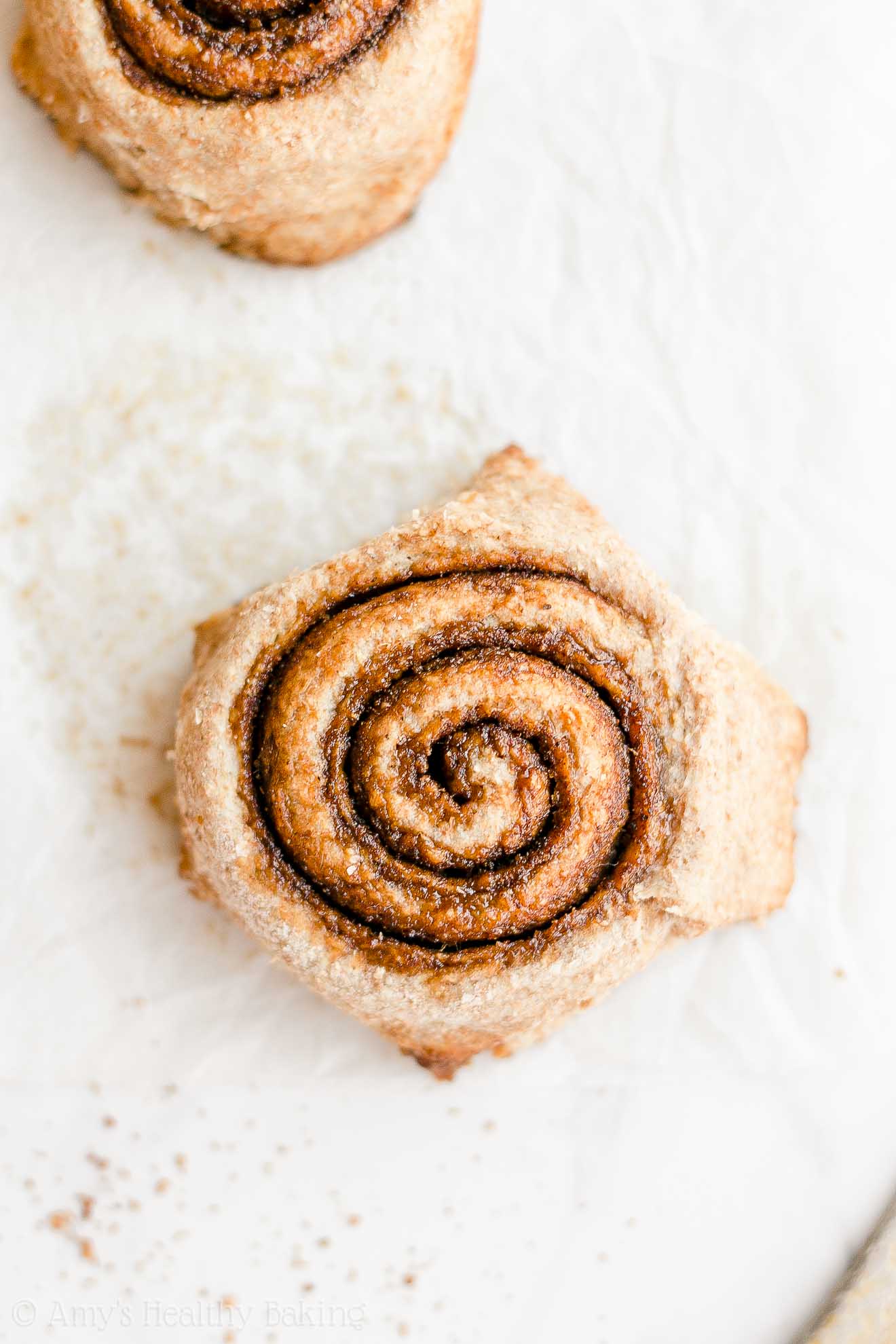 But before you mix those two together, you also need a few other ingredients for these healthy chai spice cinnamon rolls… Like warm water, coconut sugar (this kind!), and salt. The water should be warm, but not hot! Too hot water will kill your yeast. Aim for 100-110°F, or around the temperature of a hot tub. I use the pinky test: if I can dip my pinky finger into it and it feels hot but not burning, then it’s the right temperature.

Once you’ve mixed together your dough, it’s time to knead! I almost always knead by hand. I find it so soothing and almost therapeutic. Just remember to liberally sprinkle your work surface and hands with more flour so the dough doesn’t stick! Once you can gently press your finger into the dough and it springs back almost all of the way, then you’ve kneaded enough. (You can watch my video here for a visual!) 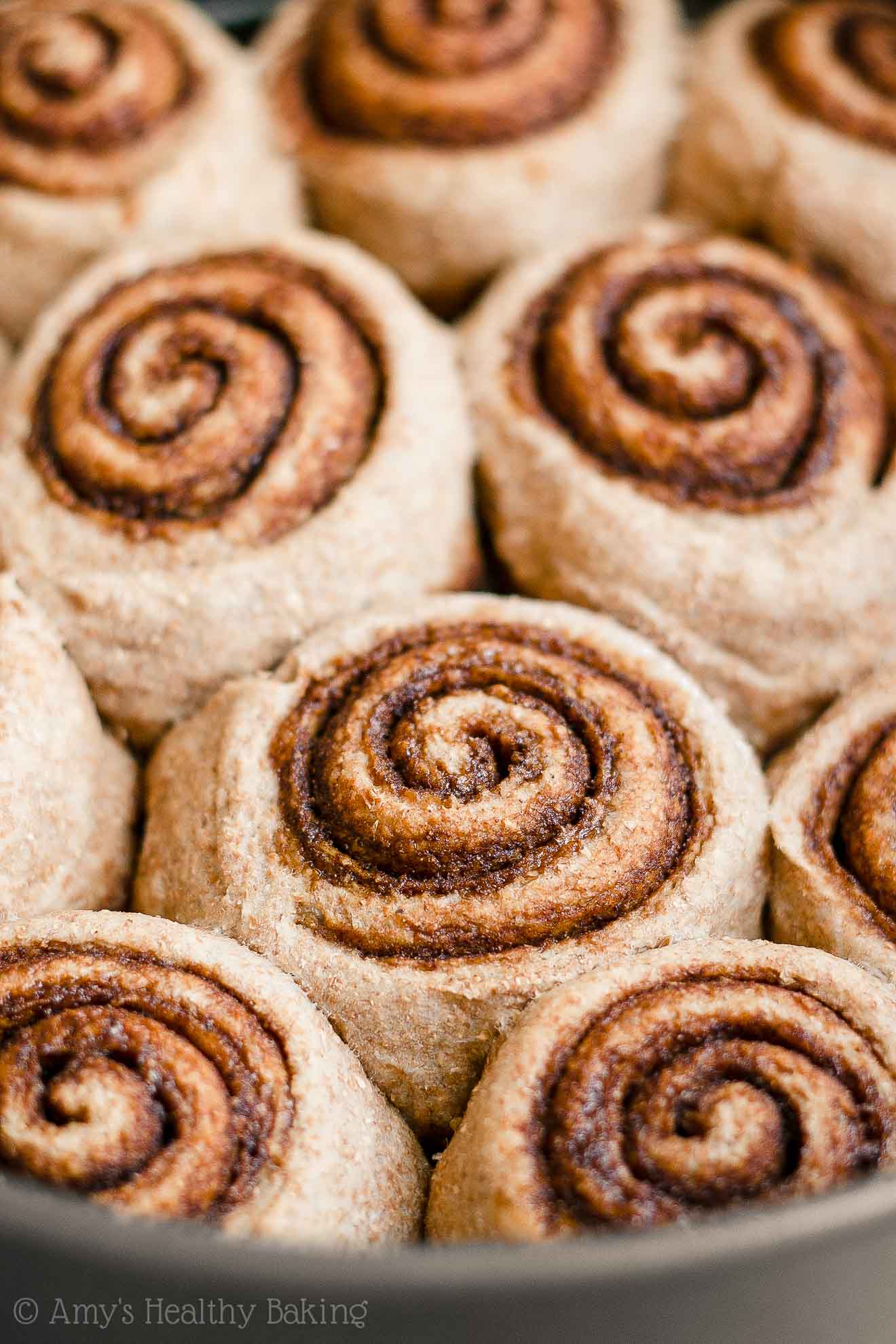 After rolling out the dough, it’s time to add your filling. You’ll brush a teensy tiny amount of melted butter across the top of the dough first. Then you’ll sprinkle the sweet spiced filling on top.

Your healthy chai spice cinnamon rolls’ filling consists of coconut sugar (remember, this kind!), cinnamon, ginger, cardamom, and cloves. Those are four of the main spices in chai. I always seem to forget how much I love cardamom until I bake something with chai spice flavors… But it’s definitely worth keeping in your pantry, and I have an extra special idea for Christmas cookies that I want to bake with it later this year! (Stay tuned!) 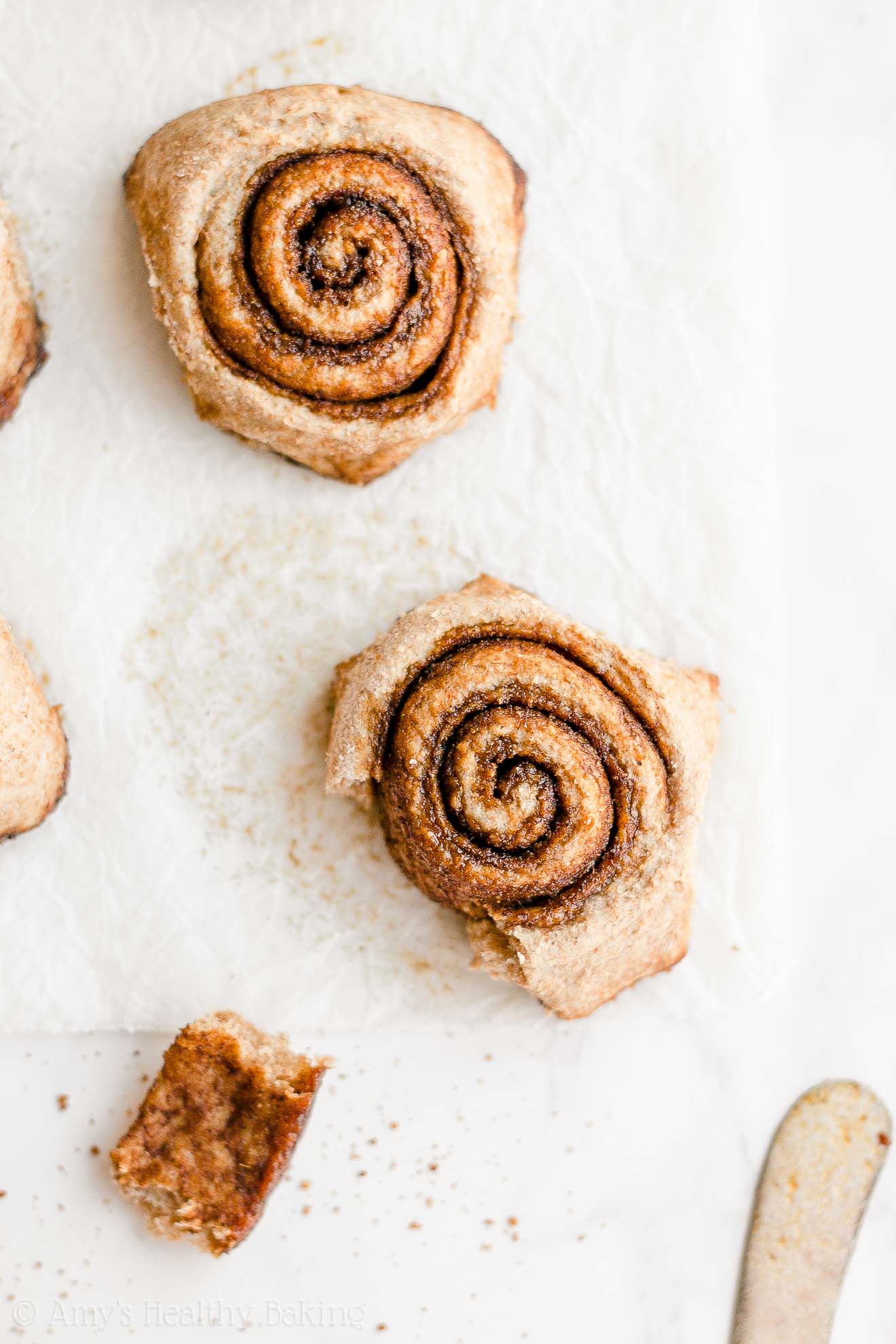 When you’re ready to slice your chai spice cinnamon roll dough into individual rolls, then I have a special trick for you… Use dental floss! You can see exactly how I do that in my video here. The dental floss easily slices through the dough and filling, so your cinnamon rolls still turn out perfectly round—not lopsided, like if you used a knife to cut them!

Then place a towel over your pan of healthy chai spice cinnamon rolls, stick that in a warm place to rise for a bit… 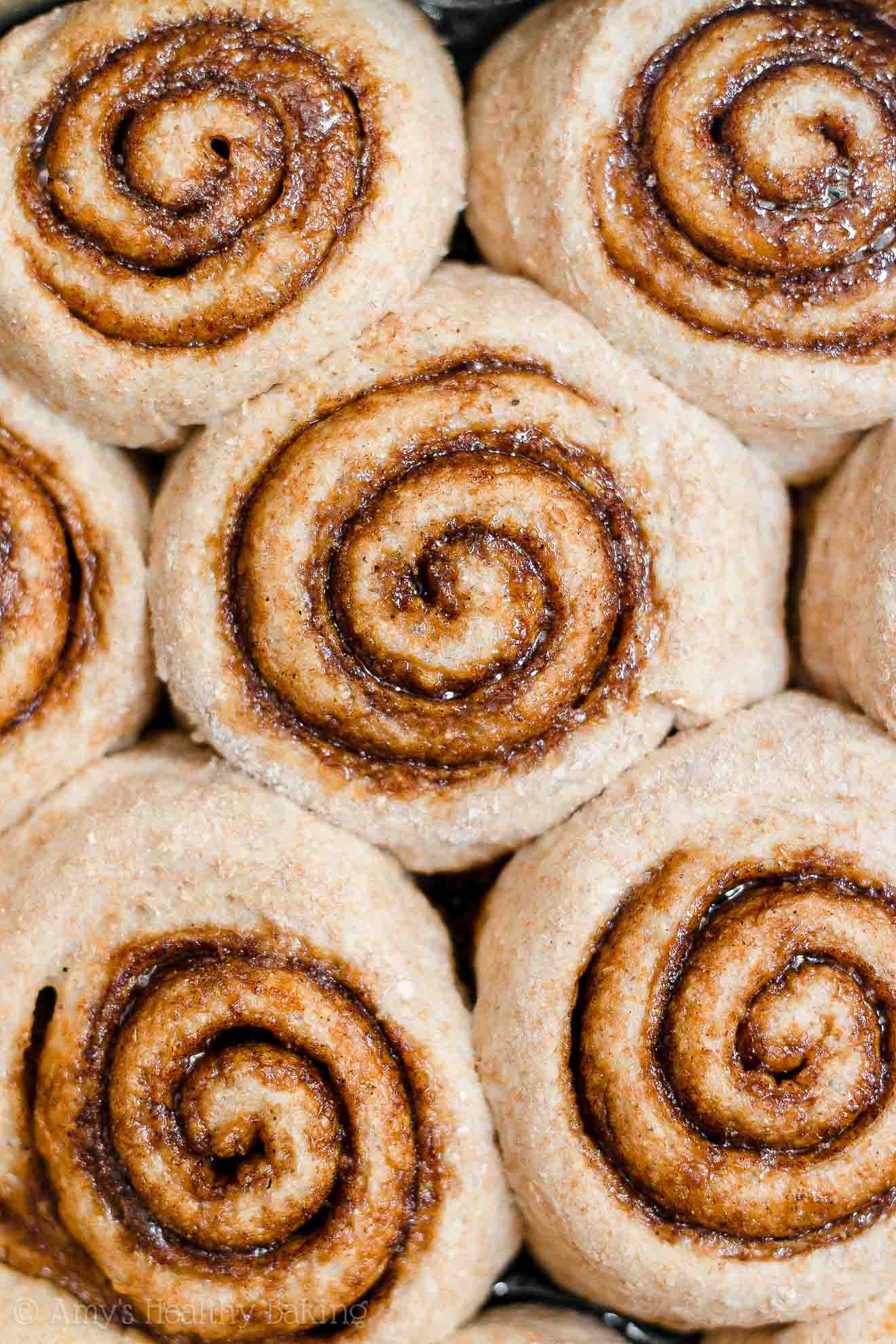 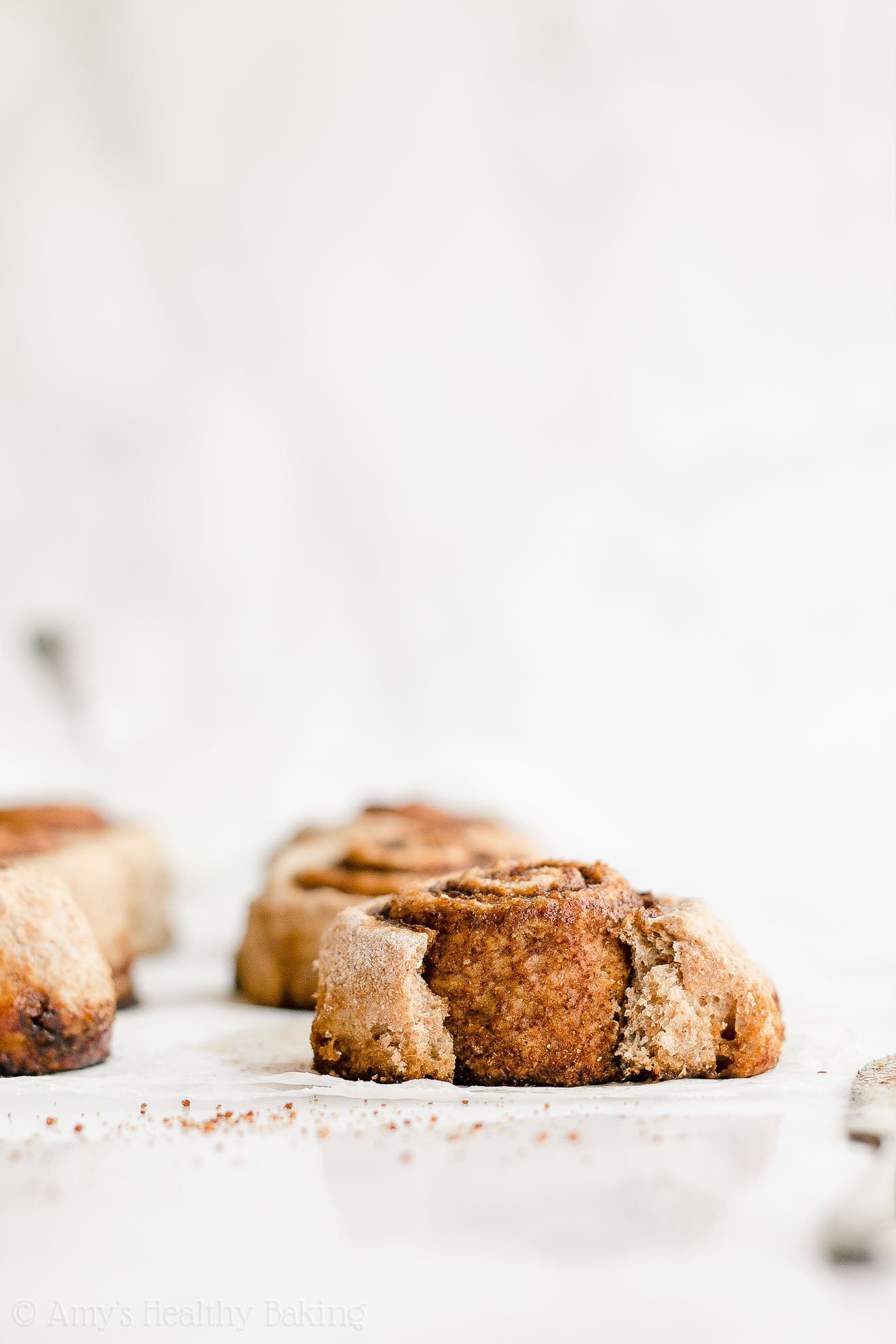 And enjoy your delicious breakfast treats! And when you make your own, remember to snap a picture and share it on Instagram using #amyshealthybaking and tagging @amyshealthybaking IN the photo itself! (That guarantees I’ll see your picture! 🙂 ) I’d love to see your healthy chai spice cinnamon rolls!

Click here to PIN the recipe and save it for later!
Yields: 12 cinnamon rolls
These are my mom’s favorite cinnamon rolls! She absolutely adores chai and its spices, and those flavors add an extra layer of coziness to these light and fluffy cinnamon rolls. Leftovers will keep for at least five days if stored in an airtight container in the refrigerator. (I highly recommend briefly reheating them just before eating to make the filling warm and gooey again!)
Notes: I highly recommend using a 9”-round springform pan, like this! Springform pans have taller sides than most traditional cake pans, so this allows your cinnamon rolls to rise properly without touching the top of the towel in Step 6.

For the yeast, I used Red Star Quick Rise Yeast. It performs the best out of any yeast I’ve used, so I highly recommend it! It always easy to find in grocery stores, so I buy mine online here. (Both their quick rise dry yeast and regular active dry yeast work equally well!)

For a vegan version, substitute your favorite non-dairy milk and Earth Balance sticks in place of the butter. (You may substitute coconut oil, but the cinnamon rolls will taste different, and the yeast won’t turn frothy in Step 2.)

To see how these cinnamon rolls are made, watch my video here (located directly above the recipe!).

The Healthier Chocolate Treats cookbook is perfect for any and all chocolate lovers. Whether you enjoy chocolate occasionally or every single day (that’d be me!), there are plenty of goodies inside for you! Healthier Chocolate Treats contains 50+ brand new healthier recipes. These recipes have never been seen before or appeared on my blog. You won’t find them anywhere else! And yes—every single one contains some form of chocolate. Whether you prefer milk, dark or white, there are lots of treats inside for you!     What Inspired You to Write Healthier Chocolate Treats? I have always loved chocolate. Every Halloween throughout my childhood, I inverted the entire contents of my bright orange jack-o-lantern bucket … END_OF_DOCUMENT_TOKEN_TO_BE_REPLACED