Learn how to make these supremely rich & fudgy brownies from scratch! They’re really easy to make—no mixer required! Only 71 calories with no refined flour or sugar, too!
Click here to PIN the recipe and save it for later! 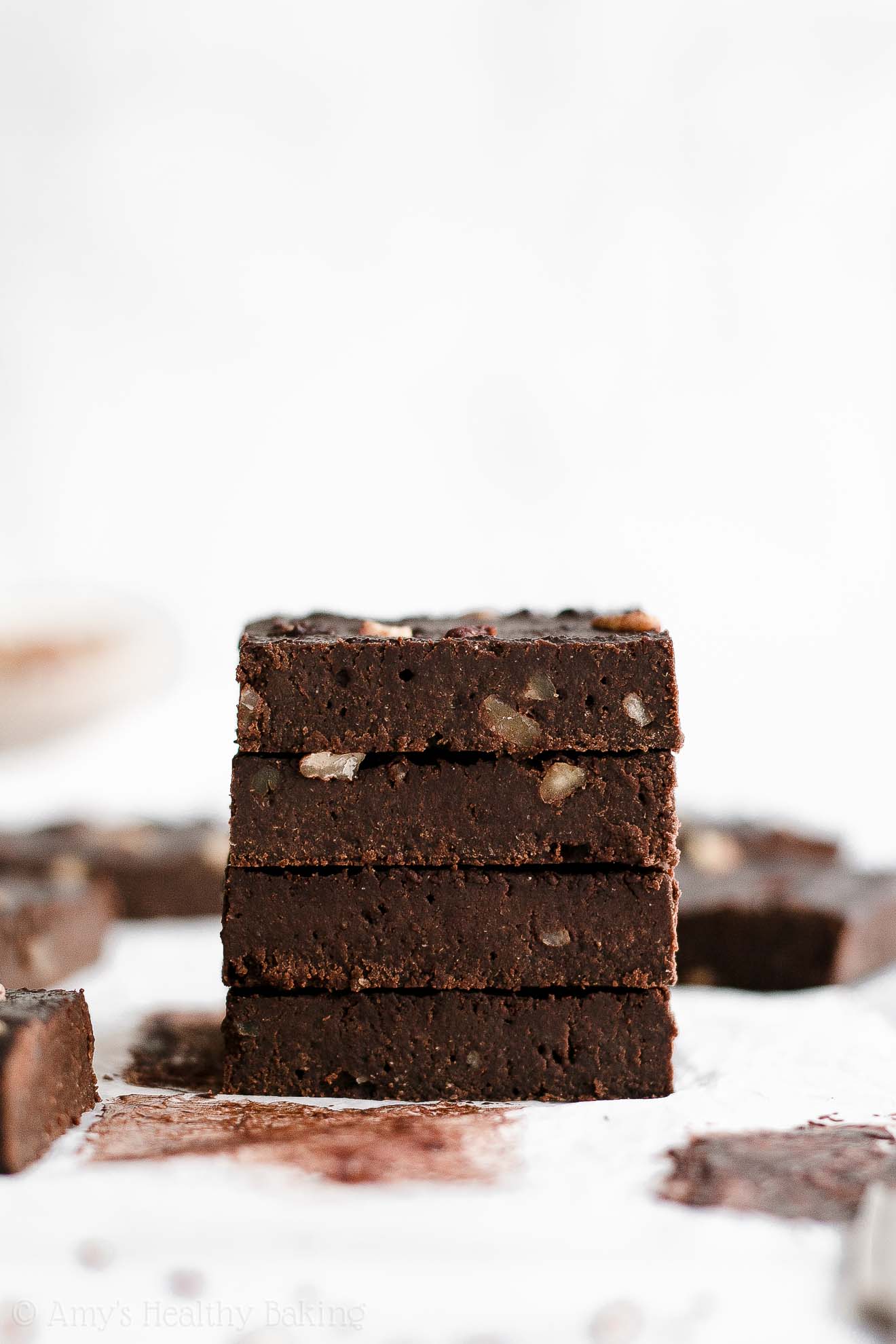 While recently in New England, we stopped for a late lunch at a cute café in Vermont in the early afternoon. As we walked inside and towards the back of the restaurant to the large table set up for our group of twelve people, I felt like I was walking through a cozy log cabin… Wooden floors, walls, tables, and chairs filled the entire space!

The kitchen sent out a gigantic amount of food for our lunch, starting with bowls of mixed greens and pasta salads, followed by platters of sandwiches with chicken, turkey, and caprese fillings, and even a pitcher of hot apple cider and bags of crunchy potato chips. They definitely took good care of us! 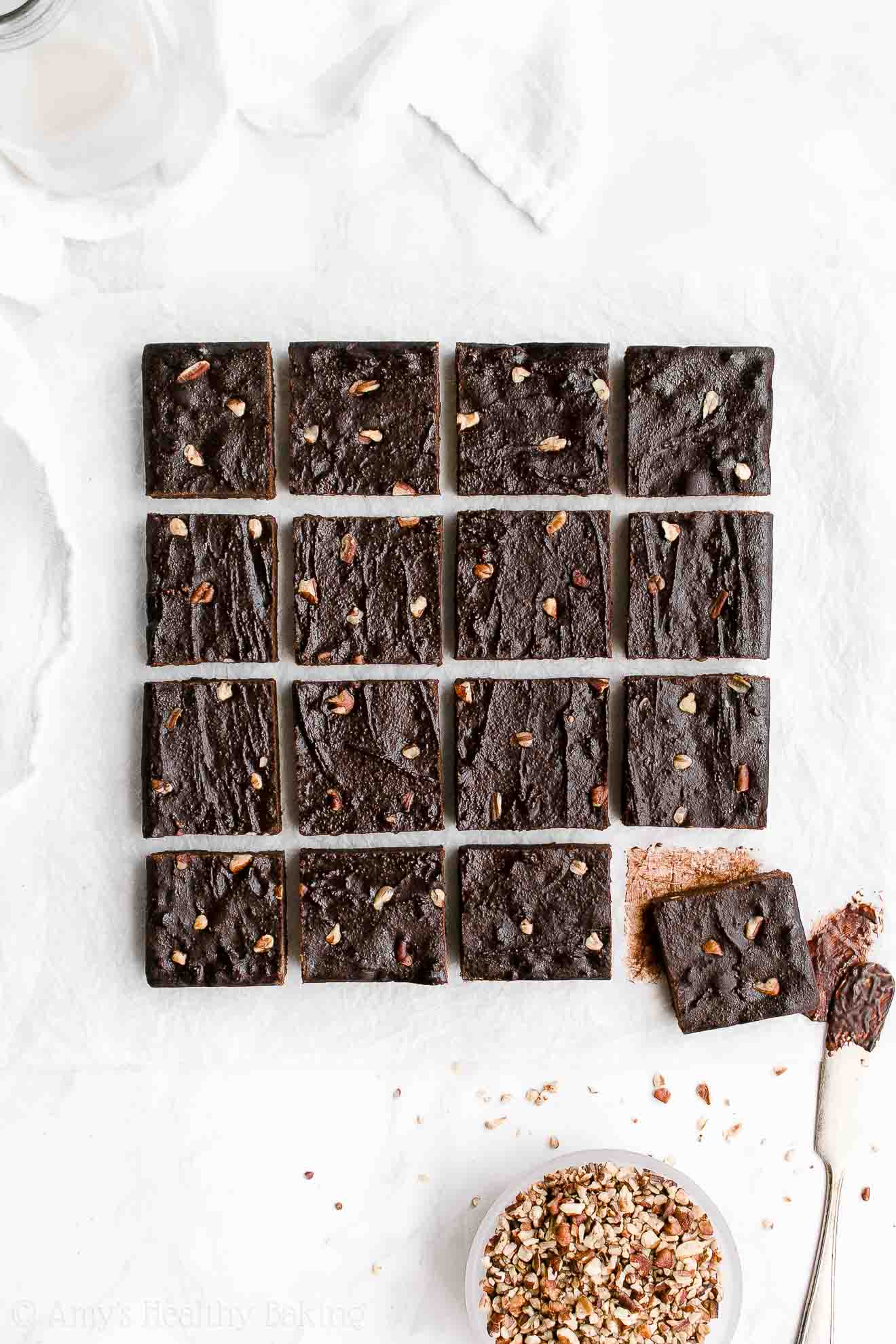 After our meal as we wandered back towards the front of the store, nearly every single person in our group stopped to look at the glass display case of sweet treats right next to the register. Although fairly full from lunch, we almost unanimously decided that we still had room for dessert… Those cookies, cupcakes, bars, and even oh-so-fancy chocolate mousse cups looked really tempting!

Yet as a chocoholic, I opted for the huge, oversized brownies sitting in the lower corner of the display case. Supremely rich, supremely fudgy, supremely chocolaty… And with a supremely decadent chocolate frosting on top. Simple, classic, and worth every single bite!

But partway through thoroughly enjoying that brownie, I remembered something… 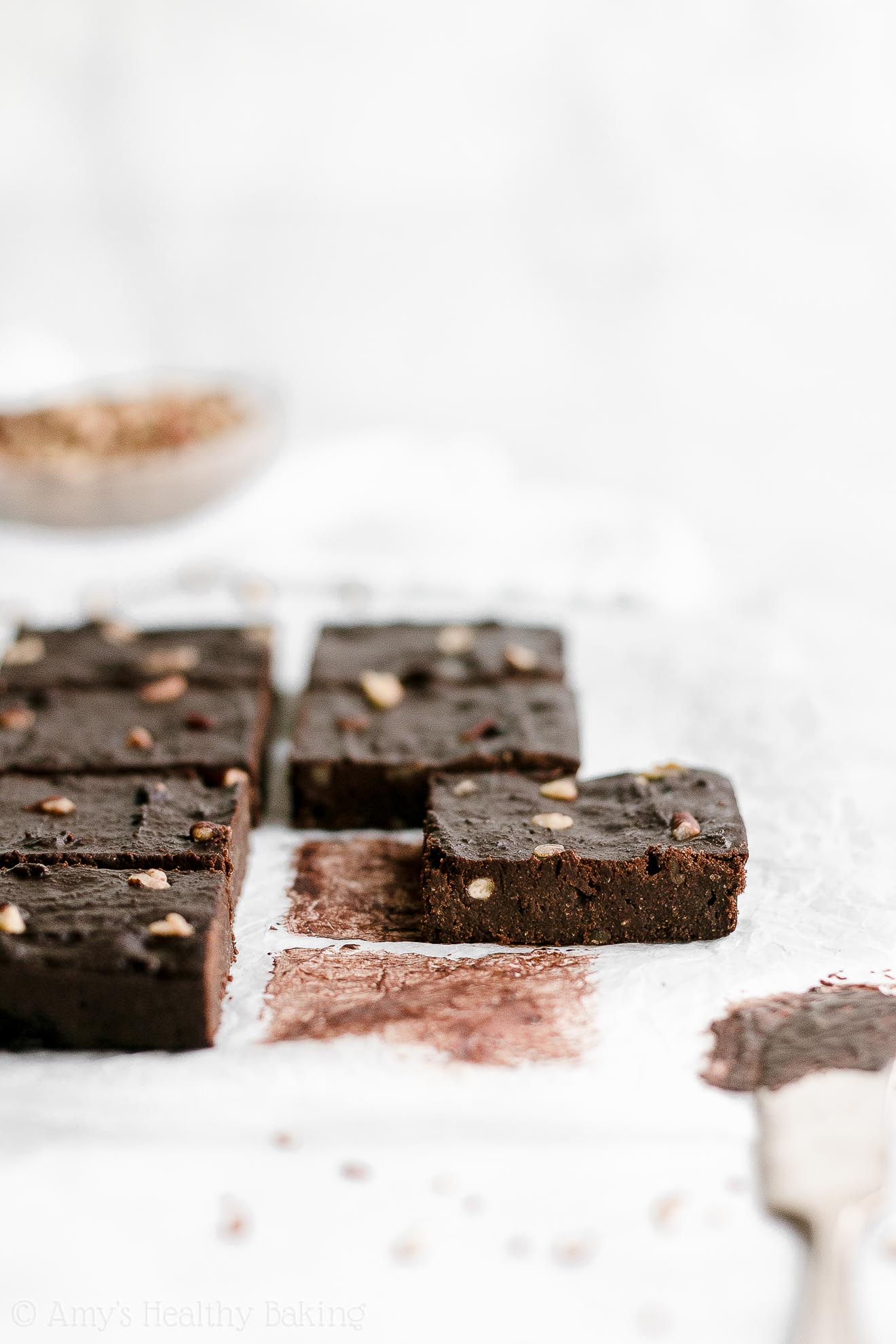 Many of my blog readers (maybe even you!) have been begging me for a healthy brownie recipe with nuts! So once I returned home from my trip, I immediately got to work in my kitchen and perfected this Healthy Fudgy Dark Chocolate Nut Brownies recipe for you!

They’re just as rich and decadent as the brownie from my trip, yet these contain no refined flour or sugar… And they’re just 71 calories, too! 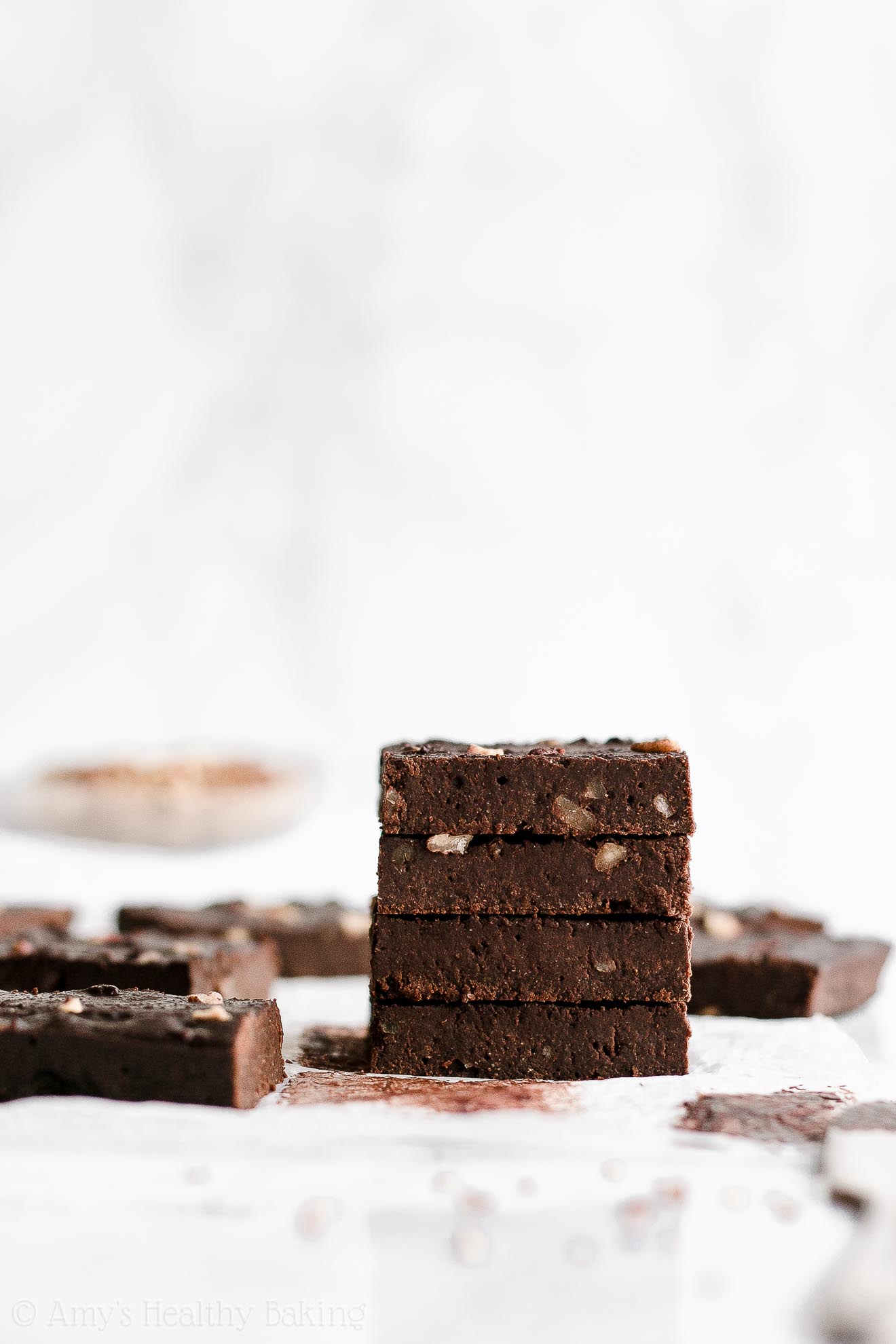 Let’s go over how to make these healthy fudgy dark chocolate nut brownies! 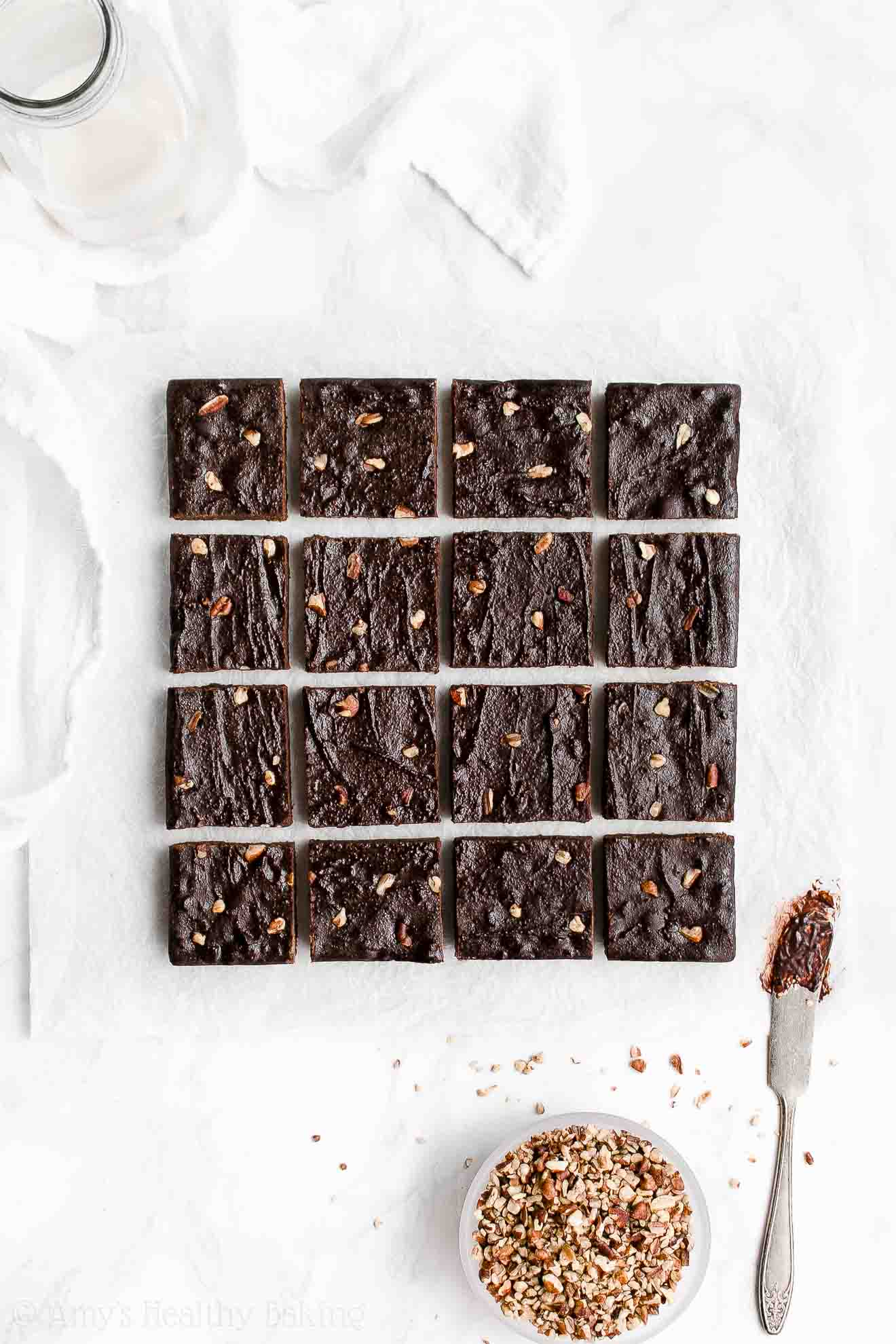 Unlike traditional recipes with a stick or two of butter, these healthy fudgy dark chocolate nut brownies only require 1 tablespoon. That really helps keep them low calorie! Then the rest of their supremely fudgy texture comes from…

Greek yogurt! If you’ve looked through some of my other recipes before, then you know just how much I love baking with Greek yogurt. It adds the same moisture to your brownie batter as extra butter or oil but for a fraction of the calories, and it gives your brownies a protein boost, too! 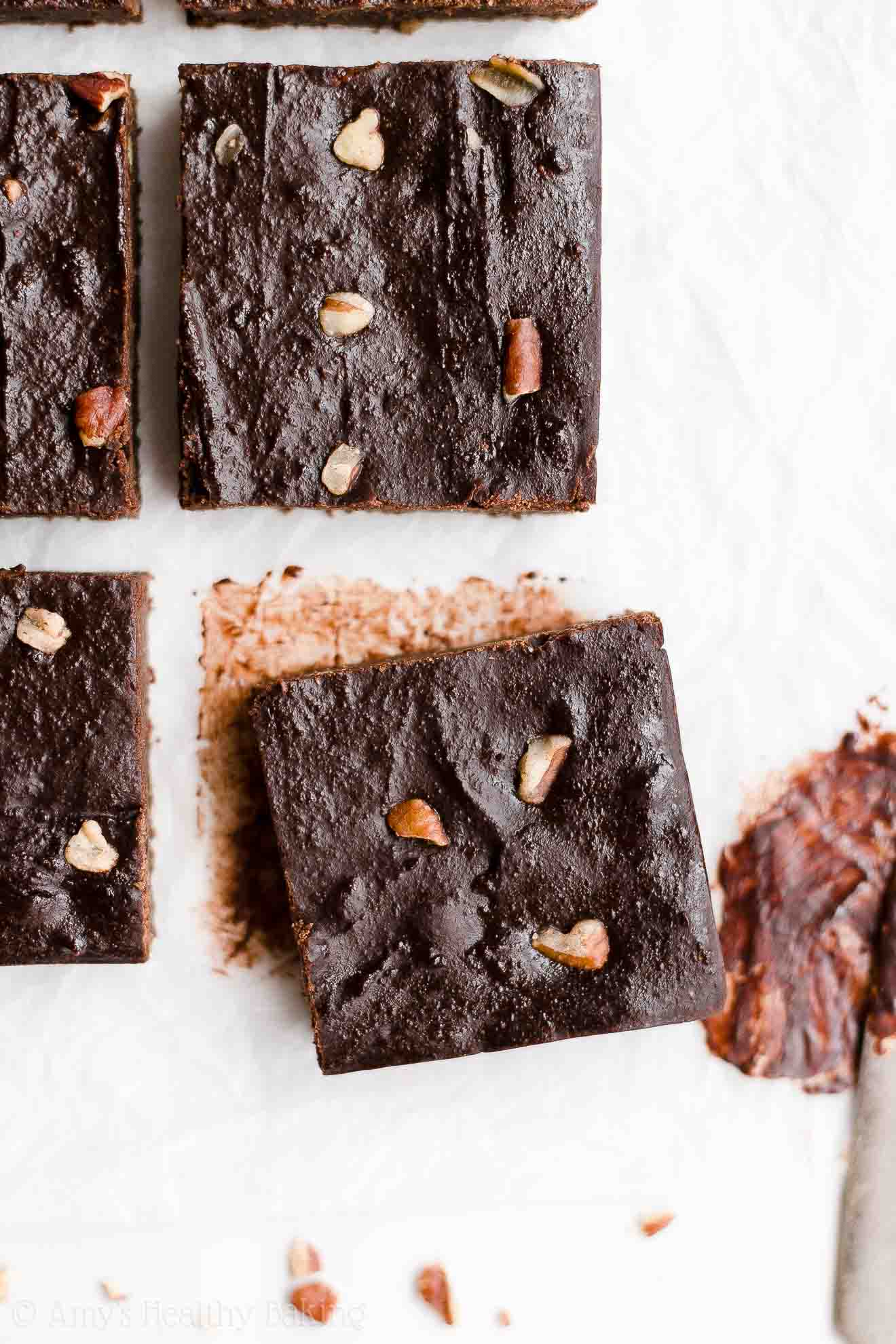 You’ll skip the refined granulated sugar and sweeten your healthy fudgy dark chocolate nut brownies with coconut sugar (like this!) instead. Coconut sugar is exactly what it sounds like: an unrefined sweetener that comes from coconuts! However, it doesn’t actually taste like coconuts. It has a rich caramel-like flavor, similar to brown sugar!

Time to mix in the nuts! I opted for finely diced pecans because many of my family members are allergic to walnuts. Both work equally well! I use these diced pecans (also called “pecan chips”) as a quick and easy shortcut. It’s so handy to keep that bag in my pantry! 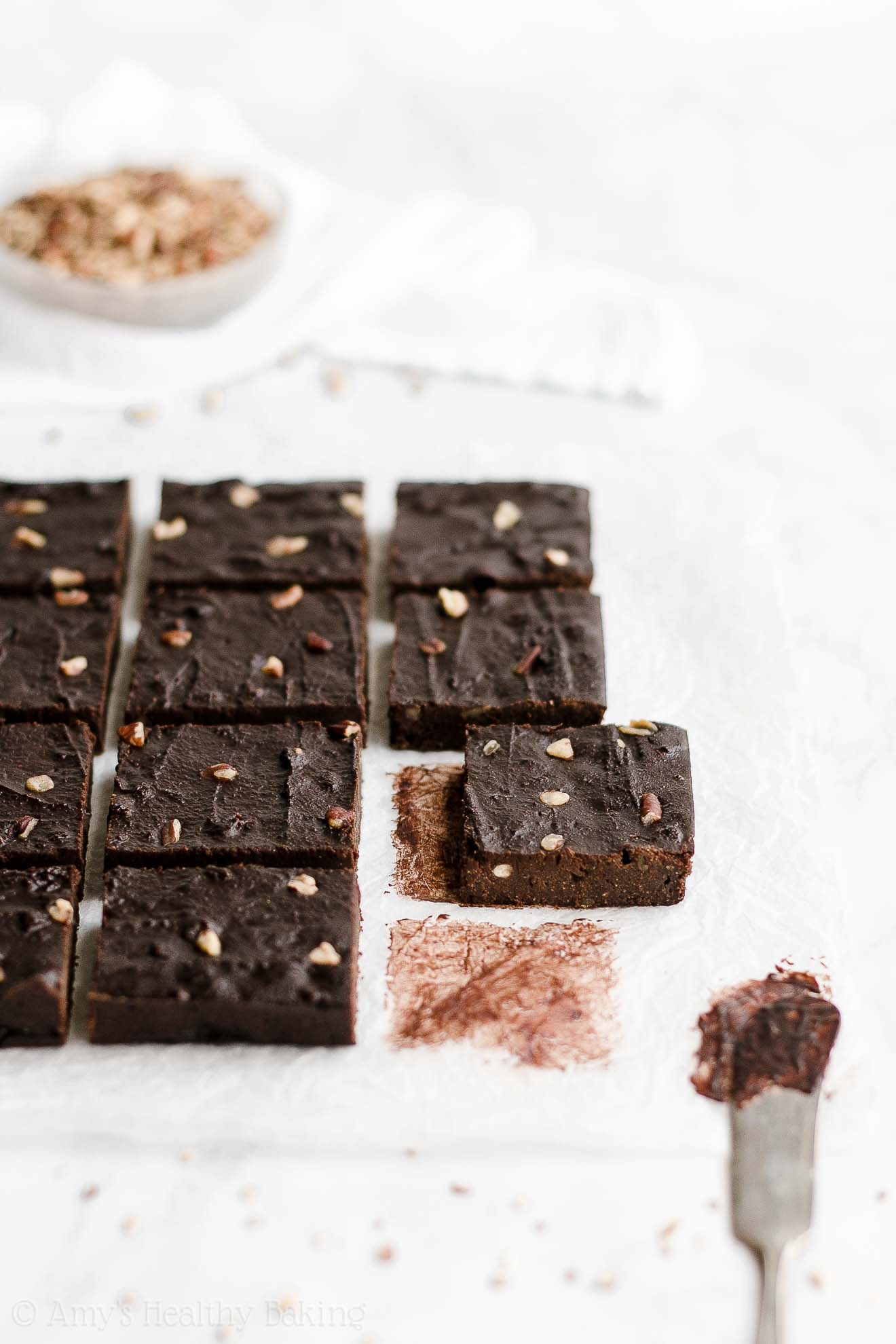 One last tip for you! When you bake these healthy fudgy dark chocolate nut brownies, you’ll actually want to pull the pan out of the oven when the sides look done but the center still looks glossy and underdone.

That’s okay the center doesn’t look fully cooked—that’s actually good! It’ll continue to cook through while your brownies cool to room temperature and set for 8 hours. Yes, I know it feels like torture to wait that long… But it gives your brownies the most decadent fudgy texture possible! 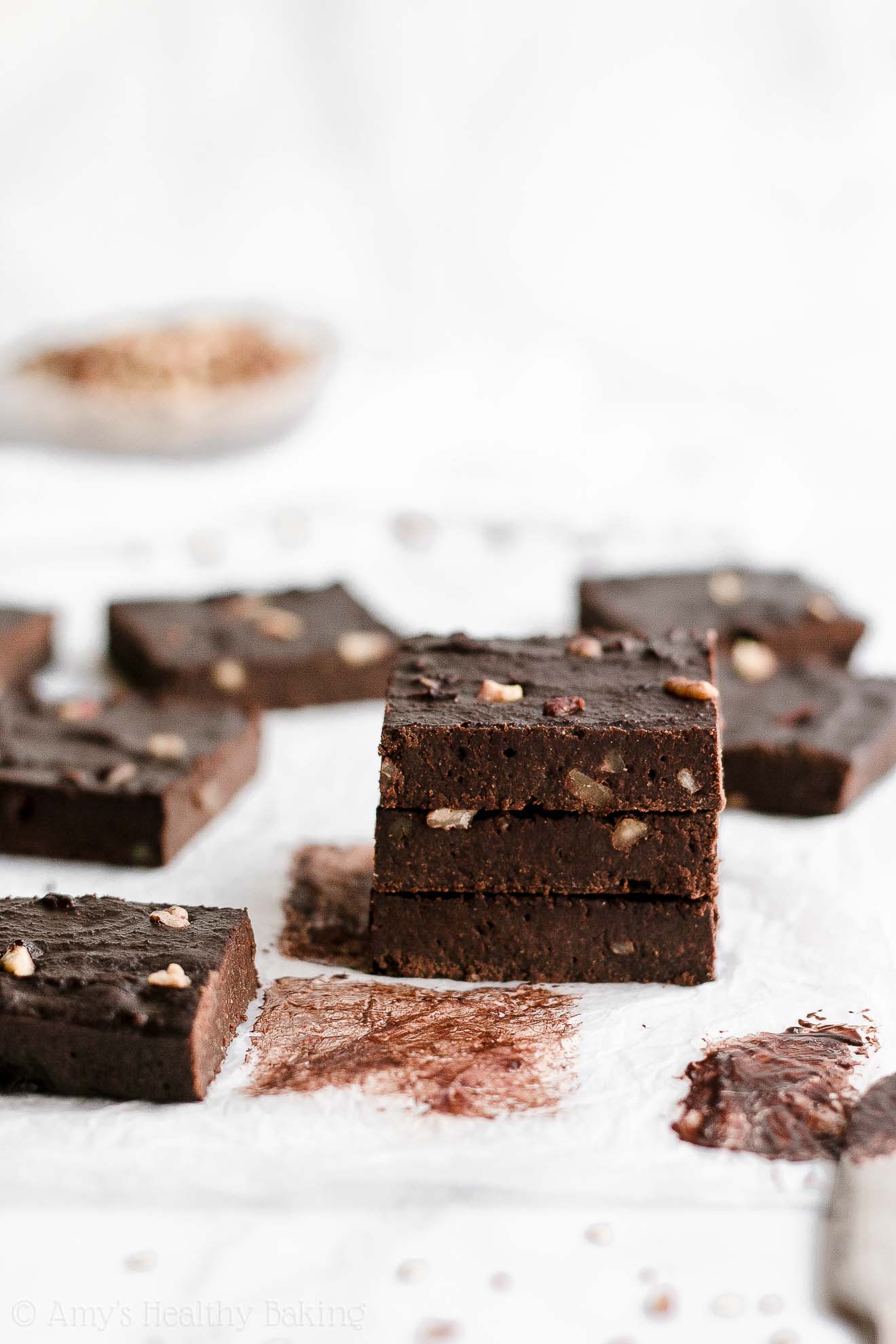 There’s a reason extra fudgy brownies are one of my favorite desserts! ? And when you make your own, remember to snap a picture and share it on Instagram using #amyshealthybaking and tagging @amyshealthybaking IN the photo itself! (That guarantees I’ll see your picture! ?) I’d love to see your healthy fudgy dark chocolate nut brownies!

Click here to PIN the recipe and save it for later!
Yields: 16 brownies
These brownies are supremely rich, decadent, fudgy, and chocolaty—just the way I love them! They have a similar flavor as 72% dark chocolate, and the nuts add a fun crunchy contrast to the fudgy and chewy brownies. They’ll keep for at least one week if stored in an airtight container in the refrigerator—if they last that long!
Notes: For the gluten-free flour, use as follows: ½ cup (60g) millet flour, 2 tablespoons (15g) brown rice flour, 2 tablespoons (15g) tapioca flour, and ½ teaspoon xanthan gum. Most store-bought gluten-free flour blends (like this one!) will work as well, if measured like this.

These are the finely diced pecans that I use. Such a handy shortcut so I don’t have to cut my own! Walnuts may also be substituted for the pecans.

The brownies are ready to come out of the oven when the edges look done but the center still looks glossy and underdone! The center will continue to cook through as you let the pan cool to room temperature on the counter and rest for 8+ hours. If your brownies start pulling away from the pan’s edges within 10 minutes of pulling them out of the oven, you’ve baked them long enough!

For the fudgiest texture, you must wait 8+ hours before slicing and serving! If you cut into them while warm, they’ll taste cakey instead of fudgy. The brownies turn fudgier the longer they rest on the counter. I promise it’s worth the wait!

The Healthier Chocolate Treats cookbook is perfect for any and all chocolate lovers. Whether you enjoy chocolate occasionally or every single day (that’d be me!), there are plenty of goodies inside for you! Healthier Chocolate Treats contains 50+ brand new healthier recipes. These recipes have never been seen before or appeared on my blog. You won’t find them anywhere else! And yes—every single one contains some form of chocolate. Whether you prefer milk, dark or white, there are lots of treats inside for you!     What Inspired You to Write Healthier Chocolate Treats? I have always loved chocolate. Every Halloween throughout my childhood, I inverted the entire contents of my bright … END_OF_DOCUMENT_TOKEN_TO_BE_REPLACED