Learn how to make these gingerbread cinnamon rolls from scratch! Only 112 calories! They’re really light & fluffy, even with no eggs, refined flour or sugar!
Click here to PIN the recipe and save it for later! 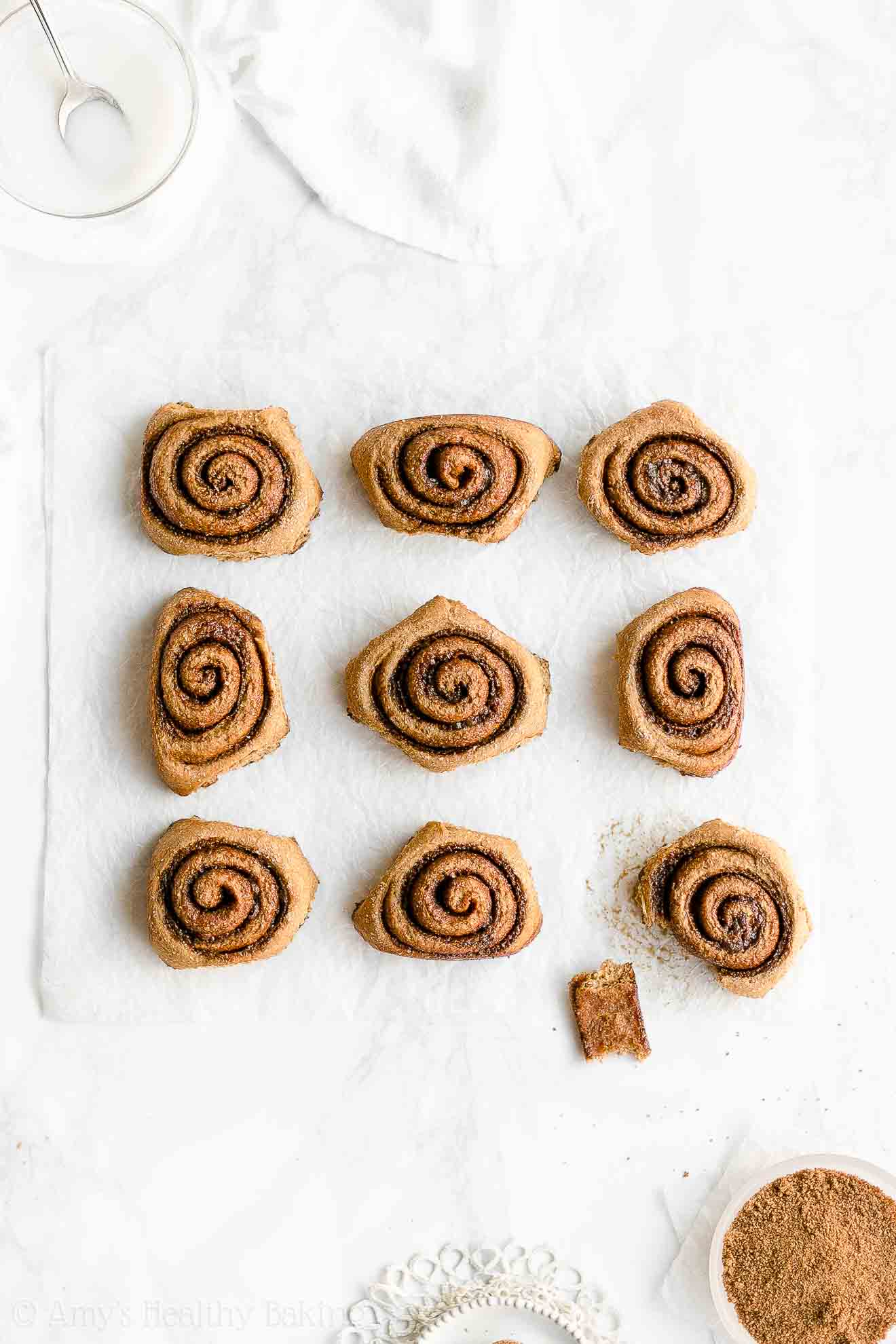 The day after Thanksgiving, a photographer friend of mine drove over to my house for the afternoon. She wanted help with her latest project, a collection of candidly shot people in their favorite environments, so I immediately agreed to participate and invited her to my kitchen.

She envisioned snapping a number of baking “action” shots, so we picked cinnamon rolls as the recipe to give her lots of options. Kneading the dough, rolling it out, sprinkling the filling, rolling it up and slicing into rounds…

And as a traditionalist, I did everything by hand. Since that’s how my dad taught me to make yeast-based recipes, that’s what I’ve always done! 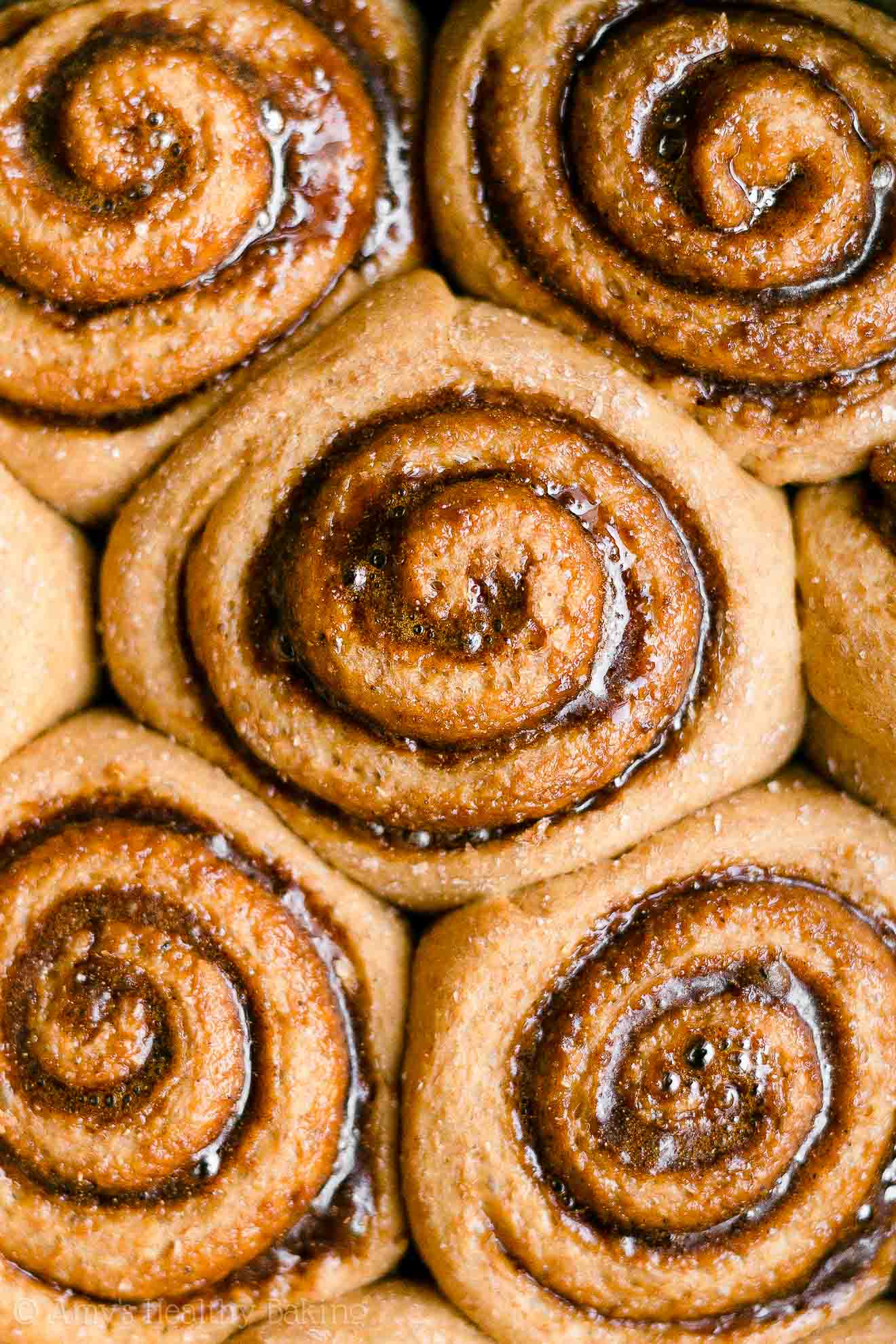 We ended up with over an hour of spare time while letting the cinnamon rolls rise and sliding them into the oven to bake, so she offered to take some headshots for me. We started with the kitchen as a backdrop (it makes the most sense for a food blogger, after all!), but we doubled over laughing partway through when my little dog ran in with her tennis ball firmly clasped in her mouth, looking left out and like she wanted her own set of portraits too!

Once the cinnamon rolls finished baking and my friend snapped a few more photos of their perfect spirals, I packed up all of them for her to bring home. She looked surprised, but I reassured her that I still had plenty of Thanksgiving leftovers (and desserts!) in my fridge and didn’t need an entire batch of cinnamon rolls to tempt me. 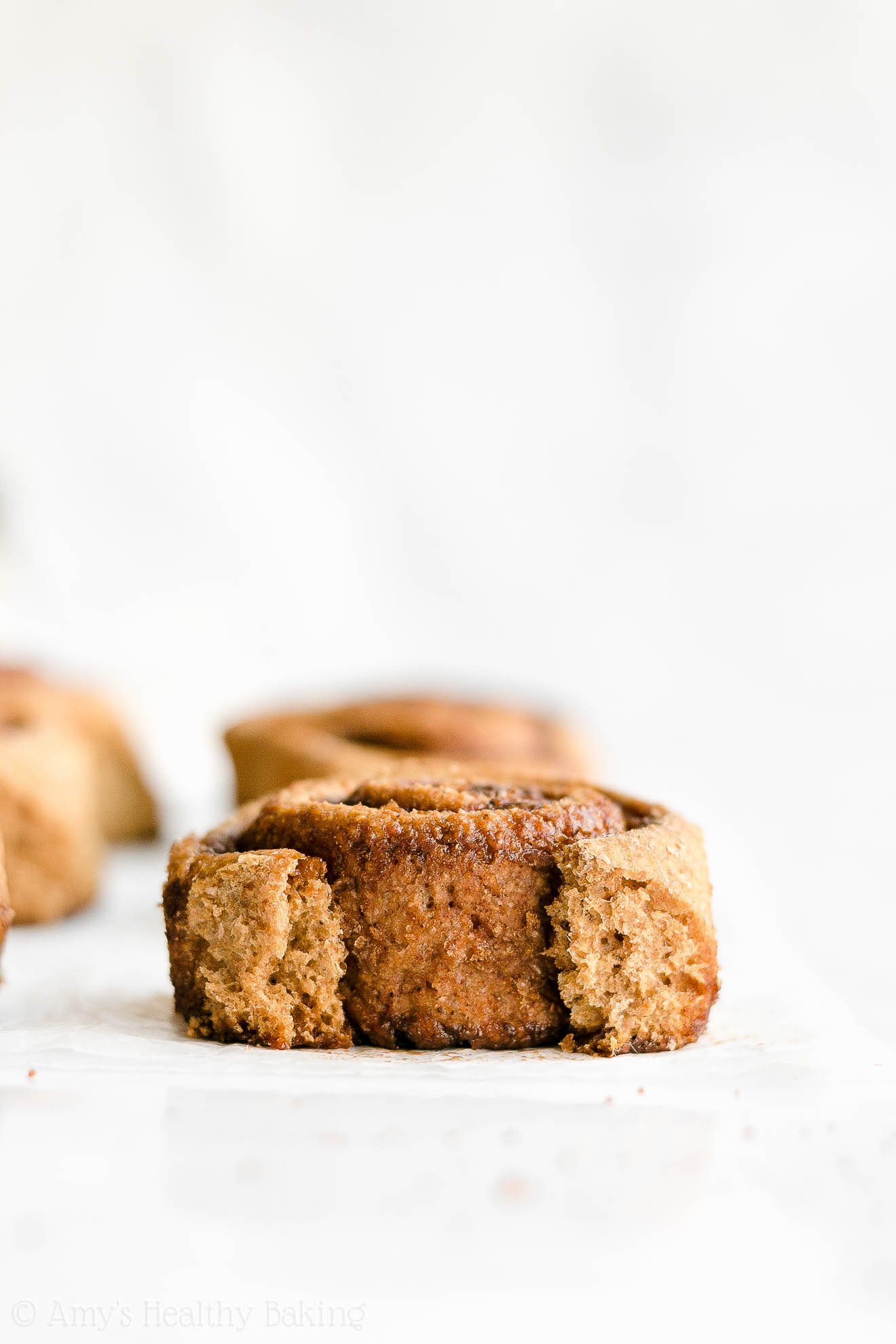 Besides, I already planned on baking these Healthy Gingerbread Cinnamon Rolls the following week! They’re light and fluffy, exactly the way cinnamon rolls should be, with lots of warm and cozy holiday spice flavors.

Yet unlike some traditional cinnamon roll recipes or ones you buy at the mall, these healthy ones contain no eggs, refined flour or sugar! And they’re just 112 calories!

With how festive and irresistible they are, I’m pretty sure my family would love these healthy gingerbread cinnamon rolls as their Christmas breakfast! ? 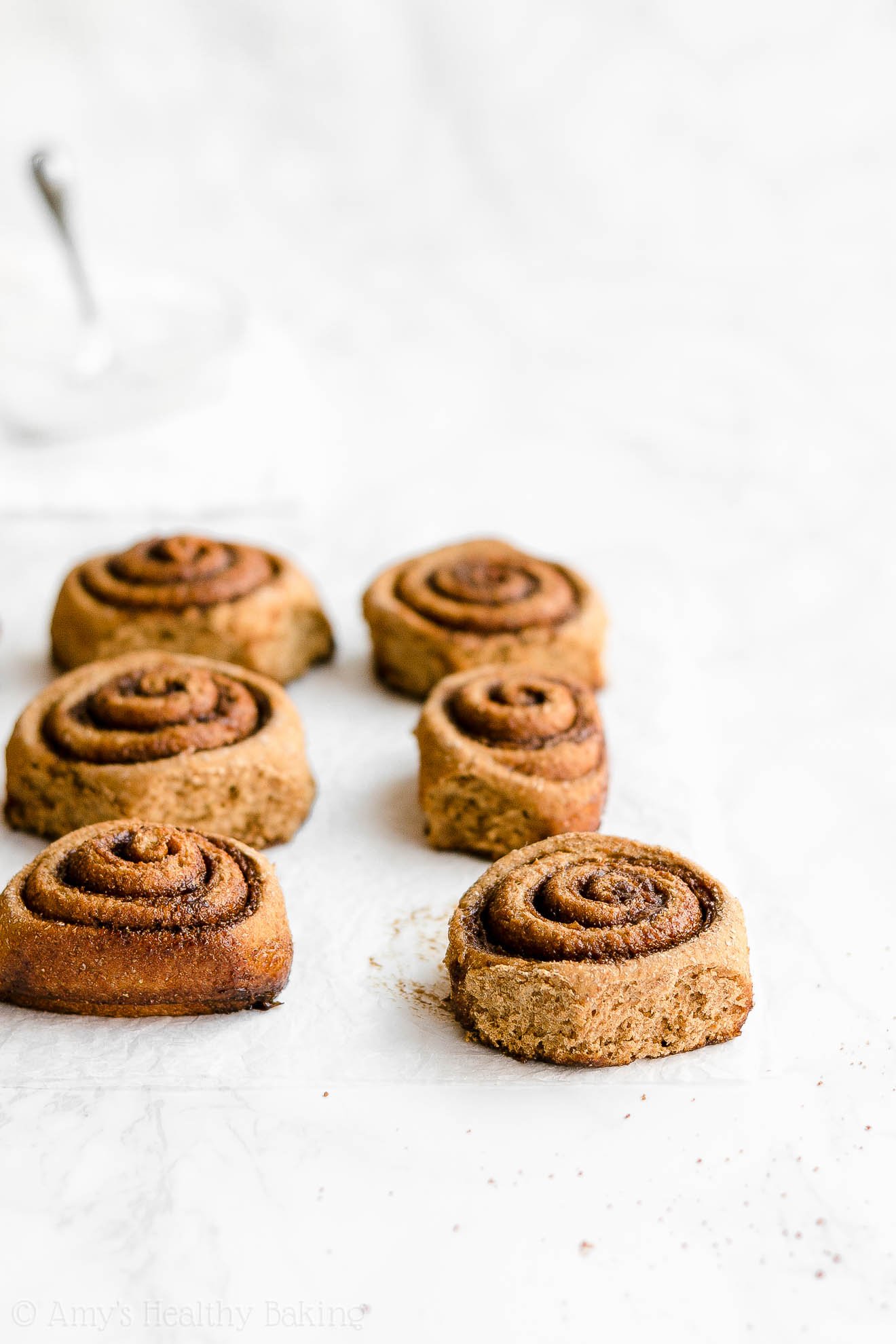 So let’s go over how to make these healthy gingerbread cinnamon rolls!

Just like many traditional cinnamon roll recipes, this healthy one uses a yeast-based dough. But don’t worry! I promise baking with yeast isn’t hard at all. My dad taught me how to make yeast-based recipes when I was eight years old, and if my childhood self could handle it, then I know you can too!

Plus I’m giving you lots of nerdy tips to ensure your healthy gingerbread cinnamon rolls turn out perfectly!

Nerd Alert #1: Warm Milk
You’ll start by adding warm milk to a bowl. The milk needs to be warm in order to properly activate the yeast. However, too hot milk will kill the yeast (or the “yeasties,” as my dad calls them!).

Your warm milk should be about 100-110°F—not too hot and not too cold!—or about the same temperature as a hot tub. I actually do everything by feel in this recipe, so I use the pinky test. If I can dip my pinky into the milk and it’s hot but not burning, then it’s just right! 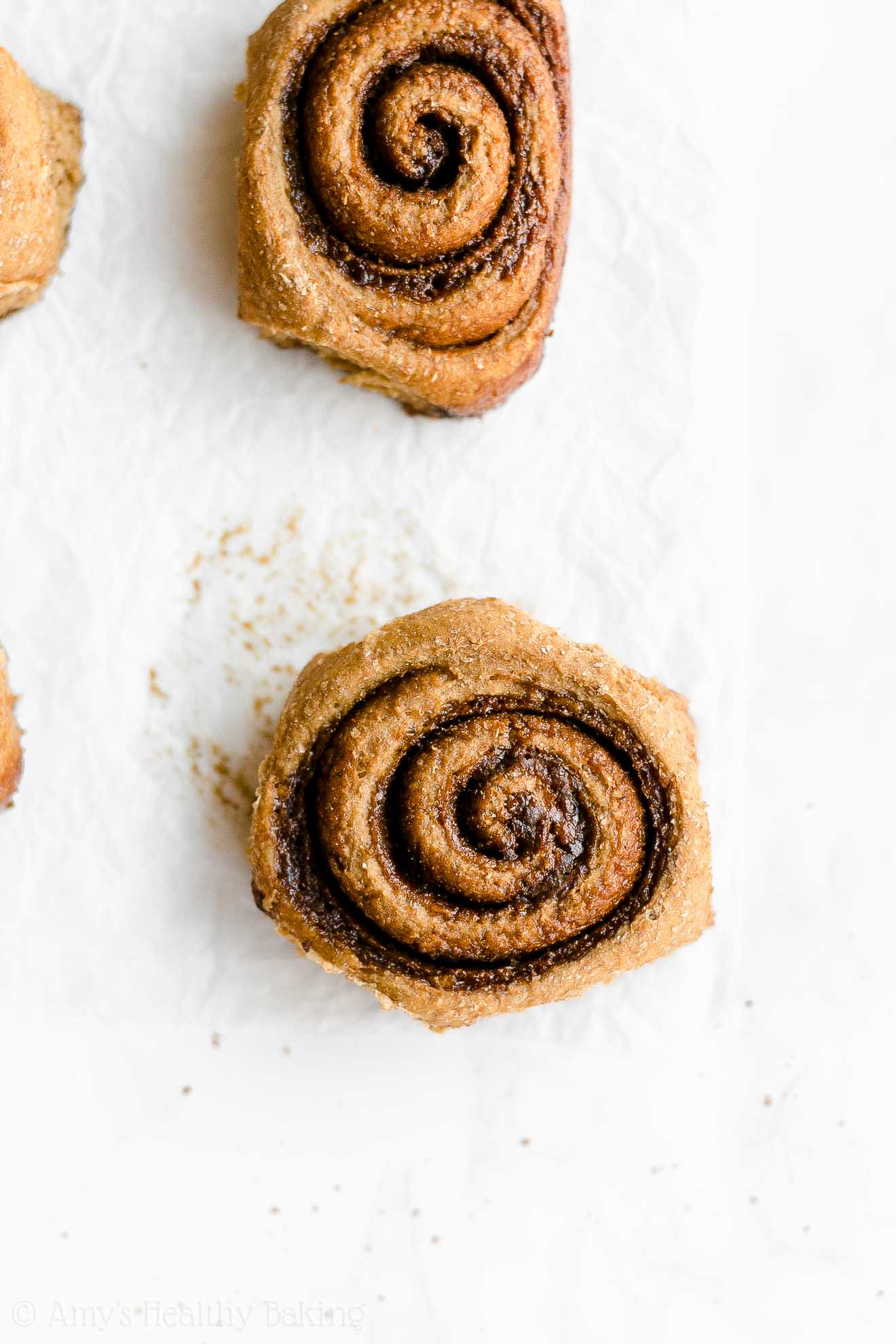 Nerd Alert #2: Molasses
Next, you’ll add in molasses. I use this kind, not blackstrap! The molasses does two things. First, it provides half of the iconic gingerbread flavor. You know that deep, rich, supremely cozy flavor of gingerbread? That comes from molasses!

So please don’t skip or substitute for the molasses!

Nerd Alert #3: Yeast
I’m pretty particular about my yeast… After years and years and years of baking bread rolls and cinnamon rolls, I’ve learned that Red Star Yeast always performs the best. My baked goods always rise to twice their original height and turn out so fluffy! Because it isn’t always sold in stores near me, I actually buy mine online here. It’s totally worth it!

So you’ll sprinkle the yeast into your bowl with the warm milk and molasses, after you’ve stirred in a teensy bit of melted butter and some salt. Wait about 10-15 minutes before the next step. This is called “proofing” the yeast.

Basically… It’s like you put the yeast into their own little hot tub, and now they’ll create all of the bubbles in the hot tub themselves! After 15 minutes, your bowl should look like it contains some frothy or puffy clouds. That’s great—it means your yeast is alive and doing well! 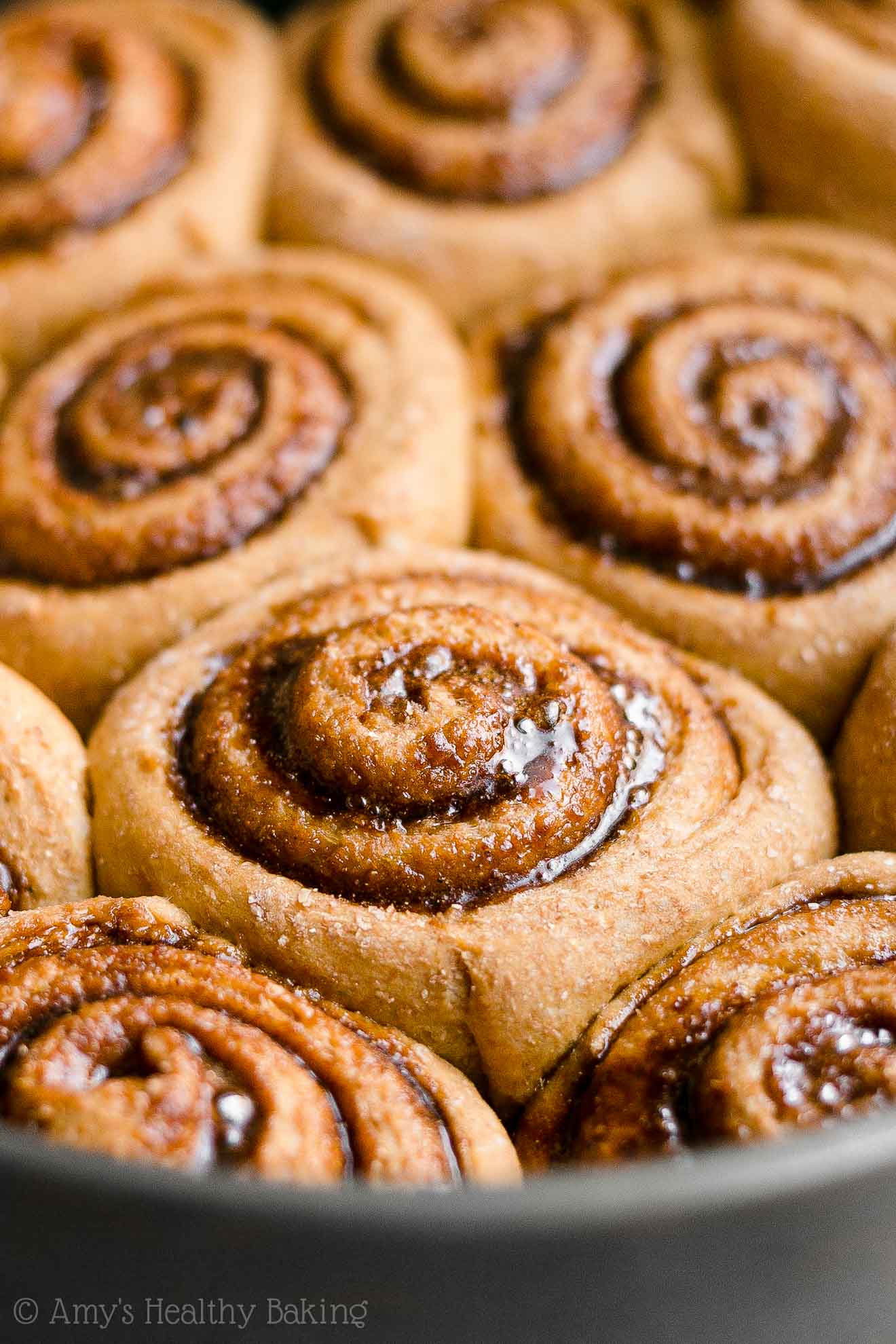 After experimenting with lots of different brands, I’ve found that Gold Medal whole wheat flour performs the best. It consistently rises taller than other brands, especially when paired with Red Star Yeast. If you can find Gold Medal whole wheat flour at your local grocery stores, it’s 1000000% worth it to make these healthy gingerbread cinnamon rolls! (And all of my other cinnamon roll recipes too!) 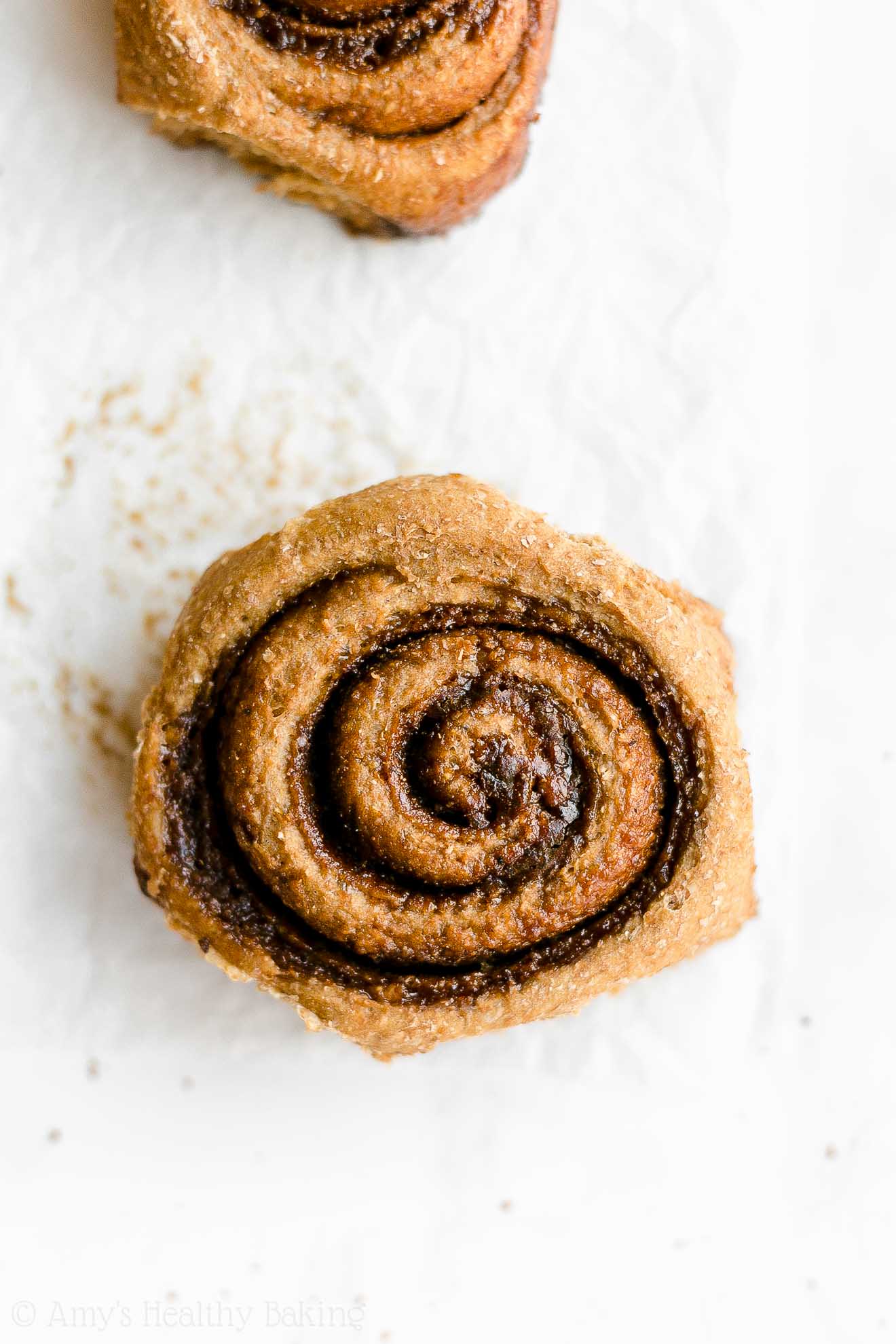 Nerd Alert #5: Kneading
I do this by hand too! It feels so soothing and therapeutic to work the dough with my hands. I use a silicone baking mat as my work surface because (a) I know it’s clean and dry, (b) it’s nonstick, which makes rolling out the dough easier later, and (c) it’s easier to clean up after than my kitchen counter!

To knead, I sprinkle a lot of flour on my silicone baking mat, the dough, and my hands. Then I use a press and fold motion. I press the heel of my hand into the dough, then fold the dough in half. Keep repeating, adding more flour as necessary to prevent the dough from sticking to your hands, until the dough mostly springs back when you gently press your index finger into it.

See? Not that hard at all! 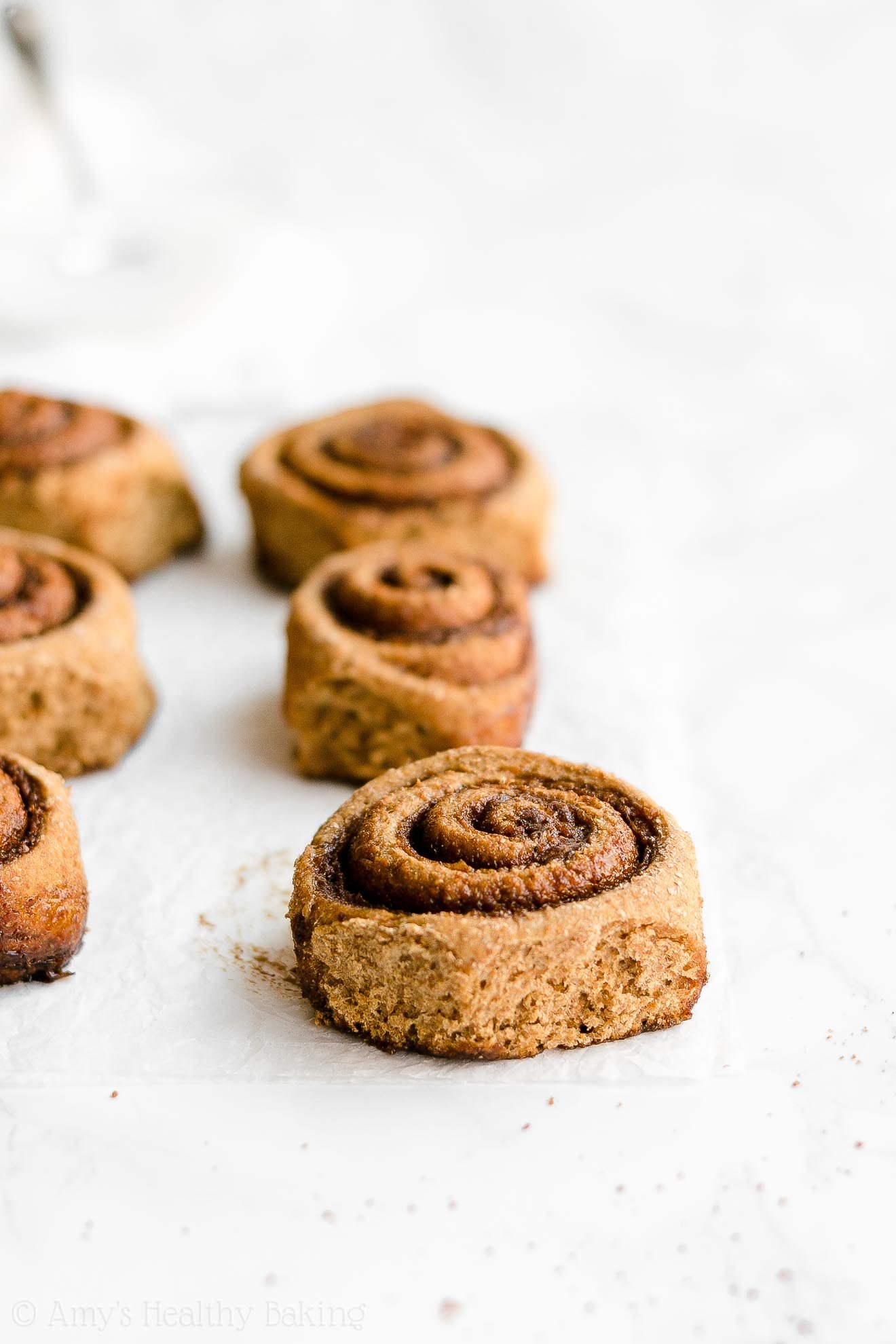 Nerd Alert #6: Spiced Filling
You’ll let the dough rest for a bit while you mix up the filling! It’s a combination of coconut sugar and gingerbread spices. I use ginger (obvious!), cinnamon, nutmeg, and cloves. Those extra spices, besides cinnamon, add such a warm and cozy flavor to these healthy gingerbread cinnamon rolls!

Nerd Alert #7: Rolling
Two types of rolling here… Rolling out the dough and rolling it back up!

Once you’ve rolled out the dough, you’ll brush a teensy tiny bit of melted butter on top. Then sprinkle your spiced coconut sugar filling. And finally… 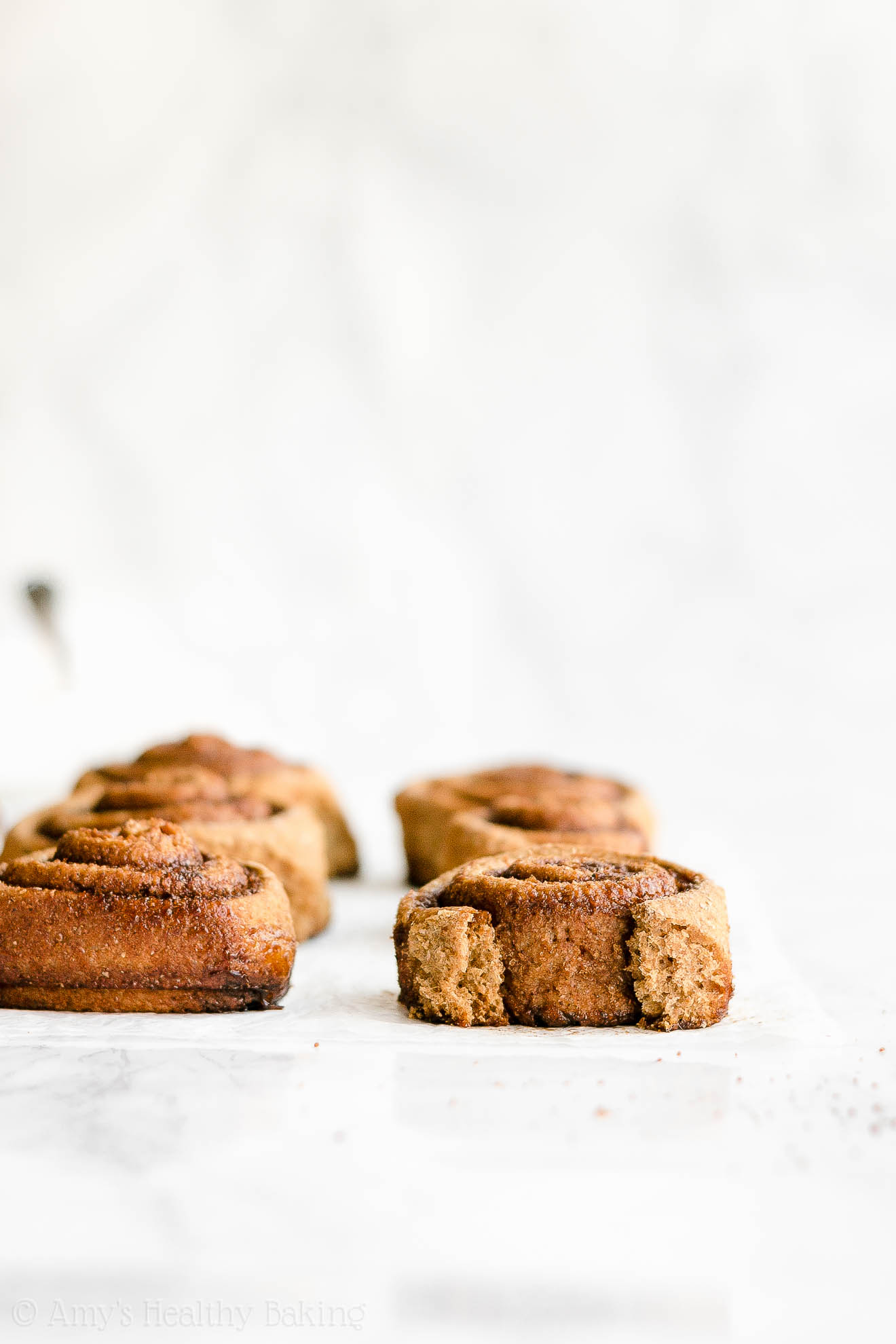 Nerd Alert #8: Slicing
This may be one of my all-time favorite baking tricks… I use something special to slice my healthy gingerbread cinnamon rolls to ensure they turn out perfectly round, not misshapen or lopsided. And that special thing is…

Dental floss! It sounds absolutely crazy, but it works like a charm. You can see exactly how I do that in my video here! 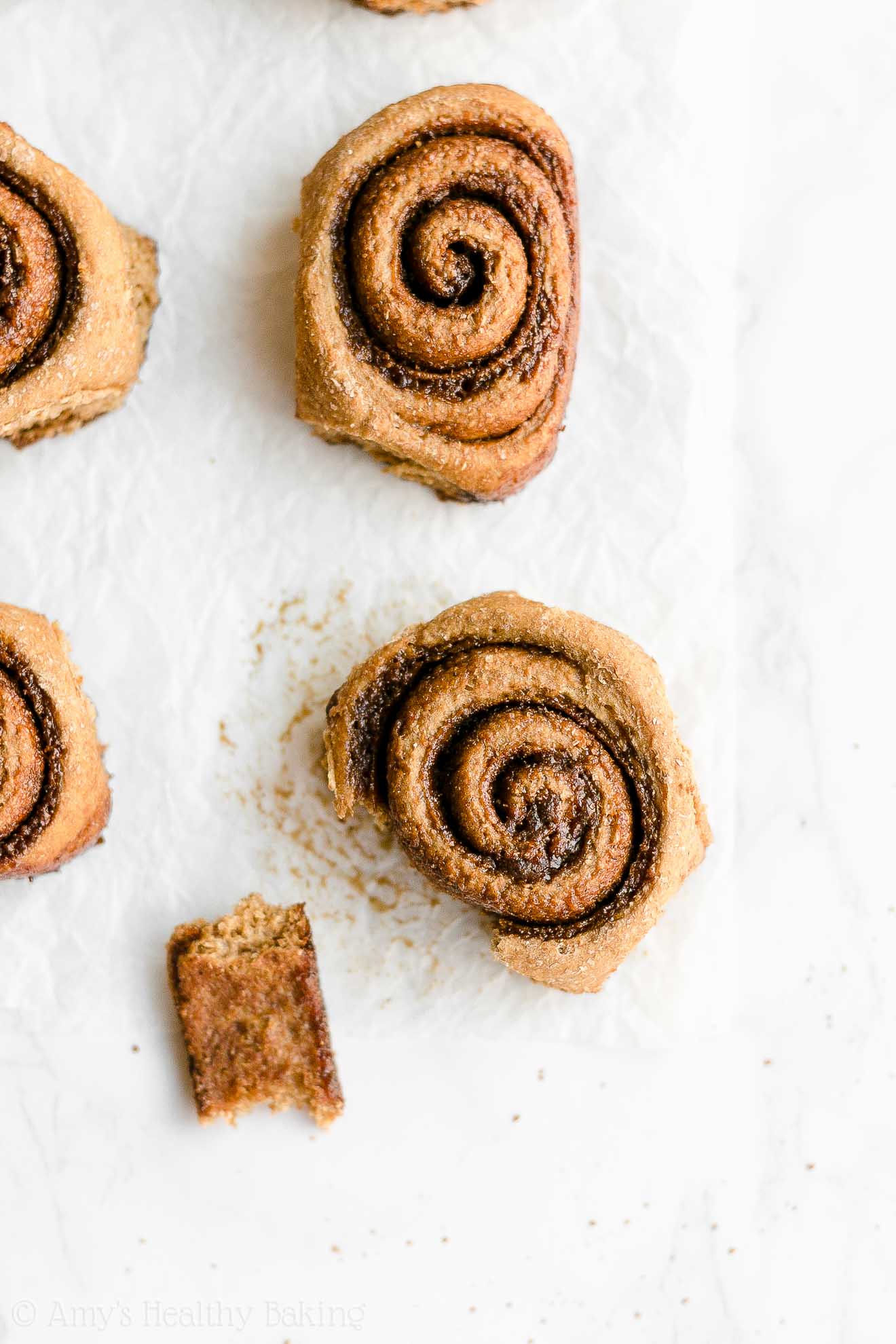 Nerd Alert #9: Rising
Once you’ve sliced all of your healthy gingerbread cinnamon rolls with dental floss, place them in your pan. I prefer springform pans because they have taller sides than standard cake pans, which lets your cinnamon rolls rise taller during this step!

Place a clean dry towel on top of your pan (with a springform pan’s tall sides, you don’t need to worry about your cinnamon rolls rising too tall and touching the towel!), and put your pan in a warm draft-free place. I use my oven for this!

I turn it on to its lowest temperature, let it run for a few minutes, then turn it off and slide my pan onto the middle rack. You actually want the oven to feel pretty warm, right around the same “hot tub temperature” as the milk.

If your oven is too cold, then your cinnamon rolls won’t rise properly! That actually happened to me with my first batch of these, but when I turned on the oven for another minute partway through rising, my cinnamon rolls got that extra bit of warmth they needed and fully rose to double their original size. 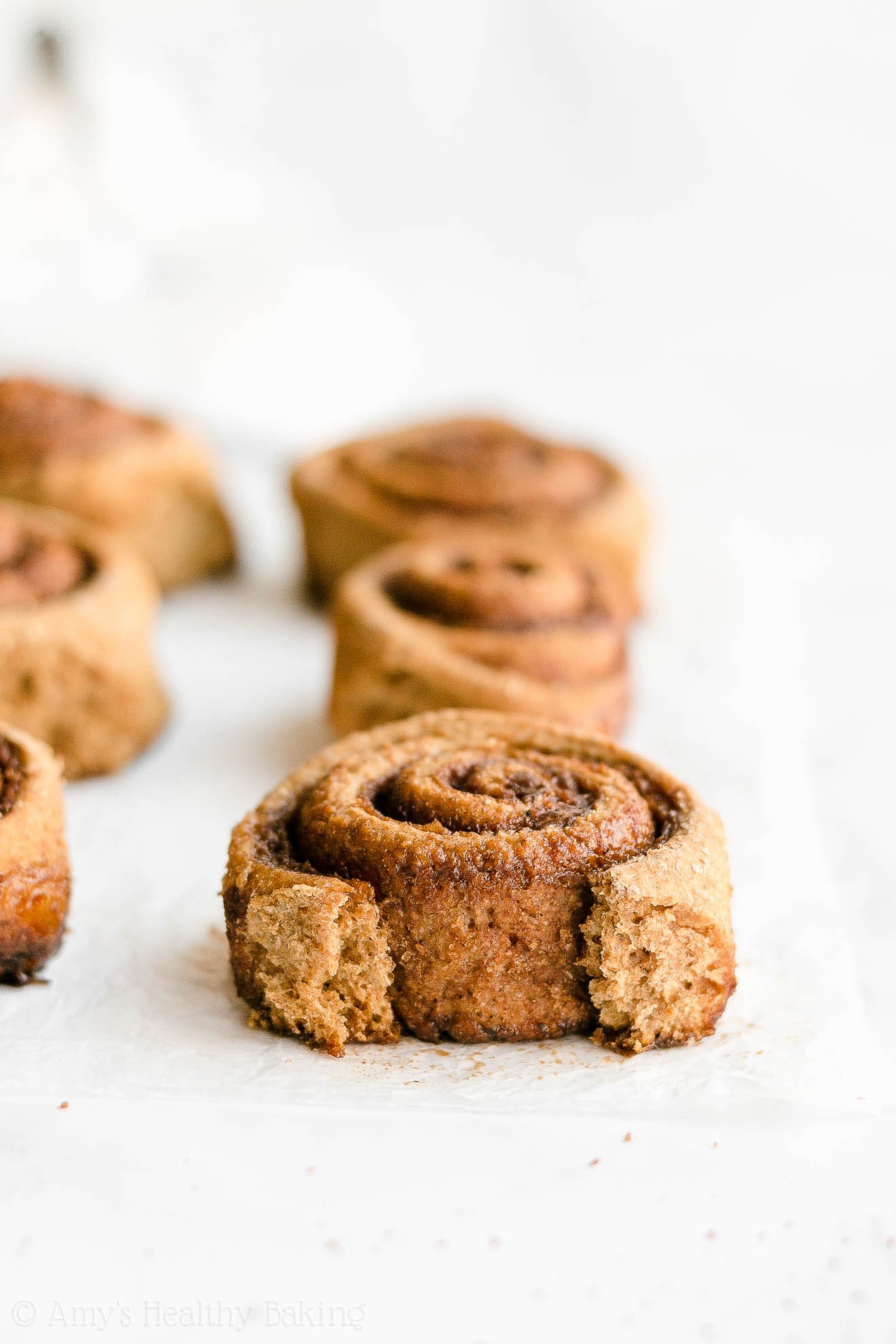 Nerd Alert #10: Baking
You’re almost done—it’s officially time to bake your healthy gingerbread cinnamon rolls! They don’t take long to bake, and I use the “feel” test again. When the sides of your cinnamon rolls feel firm yet still soft (not crunchy or crusty!) at the place where they touch their neighboring cinnamon rolls, then they’re done! 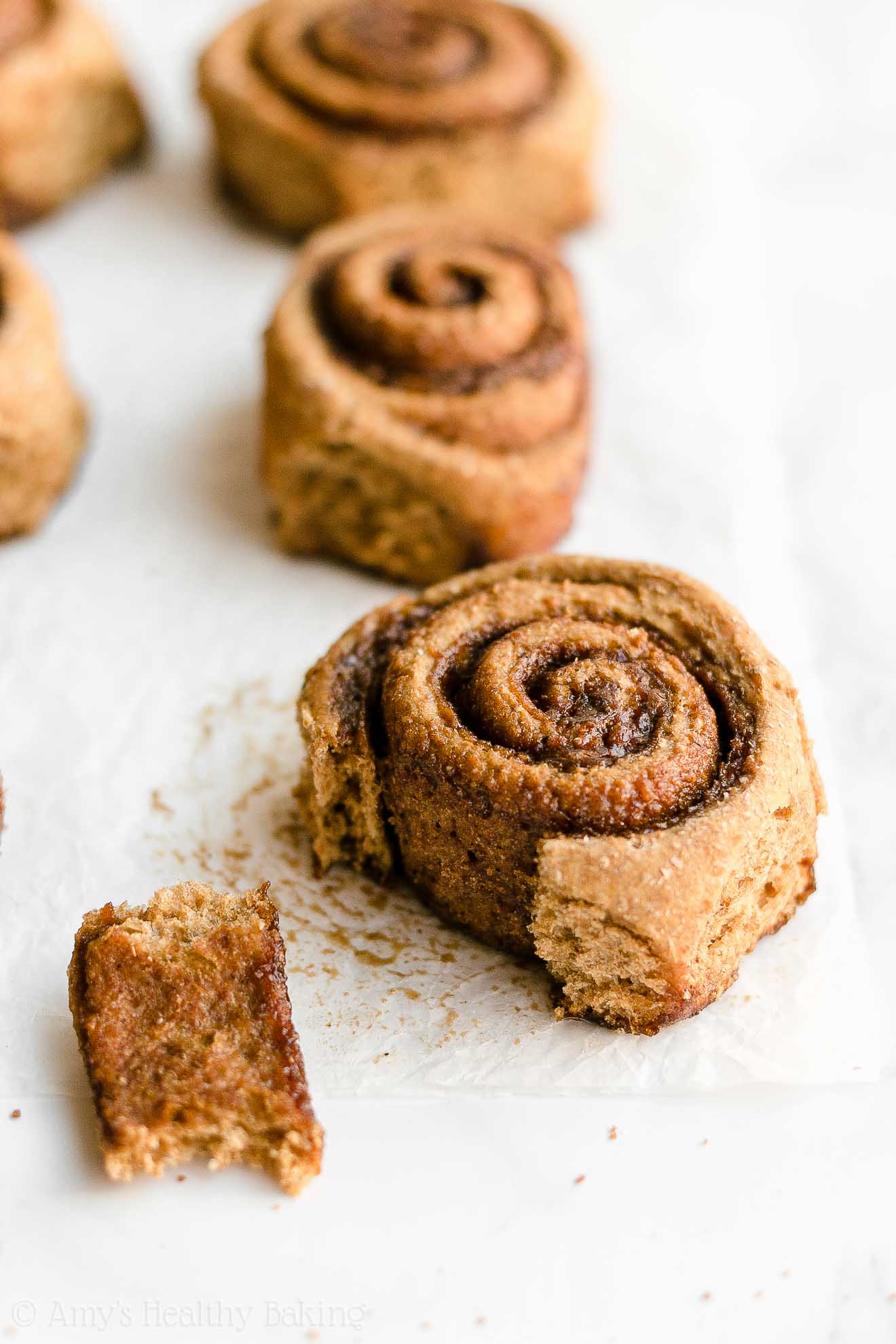 Now it’s time to eat! And when you make your own, remember to snap a picture and share it on Instagram using #amyshealthybaking and tagging @amyshealthybaking IN the photo itself! (That guarantees I’ll see your picture! 🙂 ) I’d love to see your healthy gingerbread cinnamon rolls!

Click here to PIN the recipe and save it for later!
Yields: 12 cinnamon rolls
These cinnamon rolls are such a fun breakfast treat, especially during the holiday season! They’re full of rich and cozy flavors, especially from the spices, which make that sweet filling absolutely irresistible. Leftovers will keep for at least five days (if not longer!) if stored in an airtight container in the refrigerator.
Notes: I highly recommend using a 9”-round springform pan, like this! Springform pans have taller sides than most traditional cake pans, so this allows your cinnamon rolls to rise properly without touching the top of the towel in Step 6.

For the yeast, I used Red Star Quick Rise Yeast. It performs the best out of any yeast I’ve used, so I highly recommend it! It always easy to find in grocery stores, so I buy mine online here. (Both their rapid rise yeast and regular active dry yeast work equally well!)

The molasses is essential to create the gingerbread flavor. It’s inexpensive, shelf-stable, and keeps for ages. I do not recommend substituting for it! In a pinch, you can substitute pure maple syrup, honey, or agave, but the cinnamon rolls will no longer have that classic gingerbread taste.

To see how these cinnamon rolls are made, watch my video here, located directly above the recipe! (The recipe isn't exactly the same, but it's very close!)

For more information, please see the Nerd Alerts #1-10 in my blog post above!

The Healthier Chocolate Treats cookbook is perfect for any and all chocolate lovers. Whether you enjoy chocolate occasionally or every single day (that’d be me!), there are plenty of goodies inside for you! Healthier Chocolate Treats contains 50+ brand new healthier recipes. These recipes have never been seen before or appeared on my blog. You won’t find them anywhere else! And yes—every single one contains some form of chocolate. Whether you prefer milk, dark or white, there are lots of treats inside for you!     What Inspired You to Write Healthier Chocolate Treats? I have always loved chocolate. Every Halloween throughout my childhood, I inverted the entire contents of my bright orange jack-o-lantern bucket … END_OF_DOCUMENT_TOKEN_TO_BE_REPLACED