Learn how to make these healthy banana waffles from scratch! Crispy on the outside, fluffy on the inside, and full of yummy banana flavor! They’re so easy to make and perfect for meal prepping or quick weekday breakfasts. They also contain no dairy, refined flour or sugar and just 105 calories! 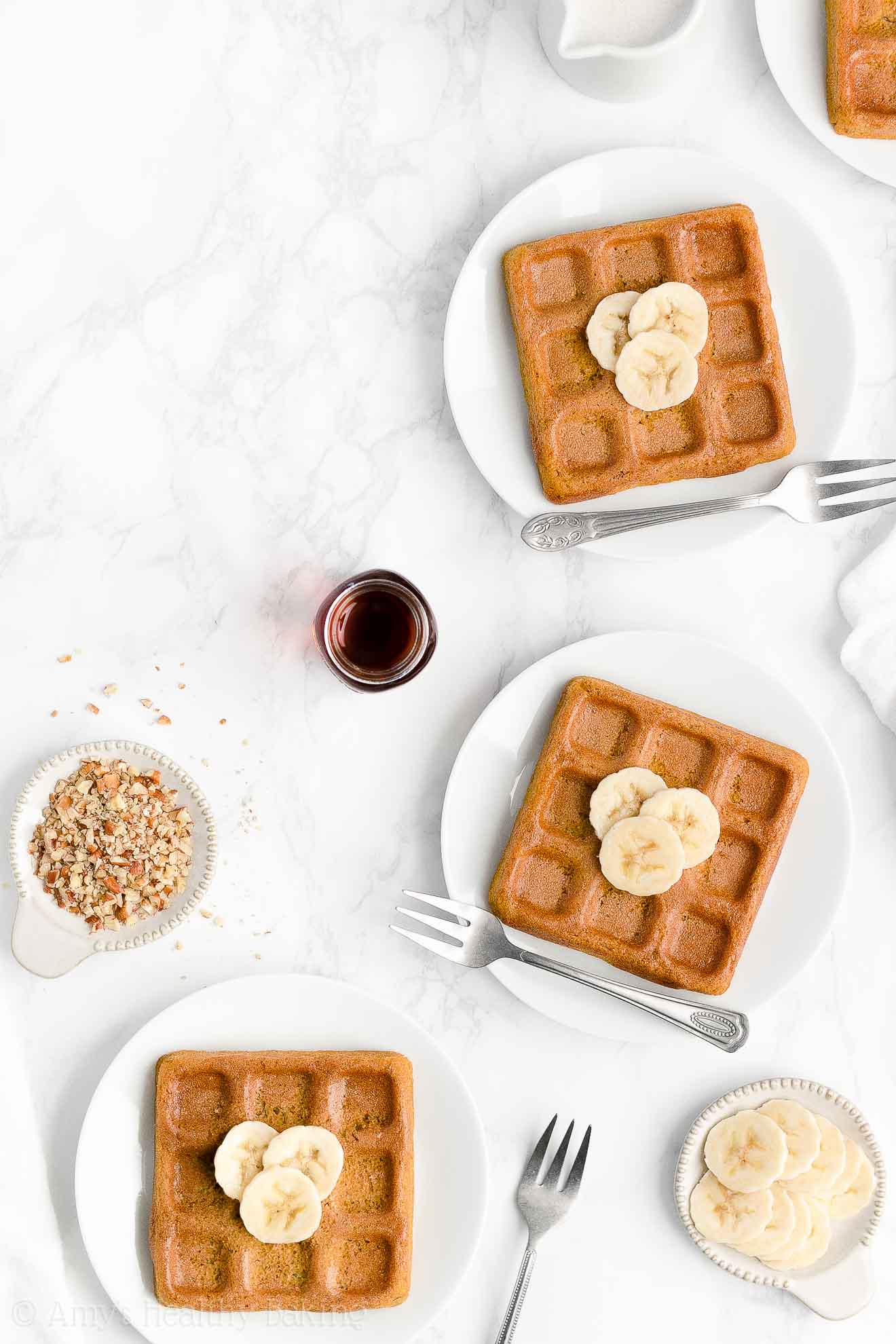 I’m partnering with Bob’s Red Mill® to bring you today’s recipe! I absolutely love all of their products, especially their flours, and use them every day. Bob’s Red Mill products are so perfect for baking!

A few weeks ago, one of my close friends from high school drove to Southern California for a vacation. As a teacher, her school actually scheduled two weeks for their spring break, so my friend planned on visiting her younger brother, a roommate from college, and me during her trip.

When she showed up at my house, we decided to drive to Coronado for the afternoon. Because of the scattered clouds, we packed both sunglasses and light jackets, and when we arrived at the beach, we spread out a couple of beach towels on the expansive sand. 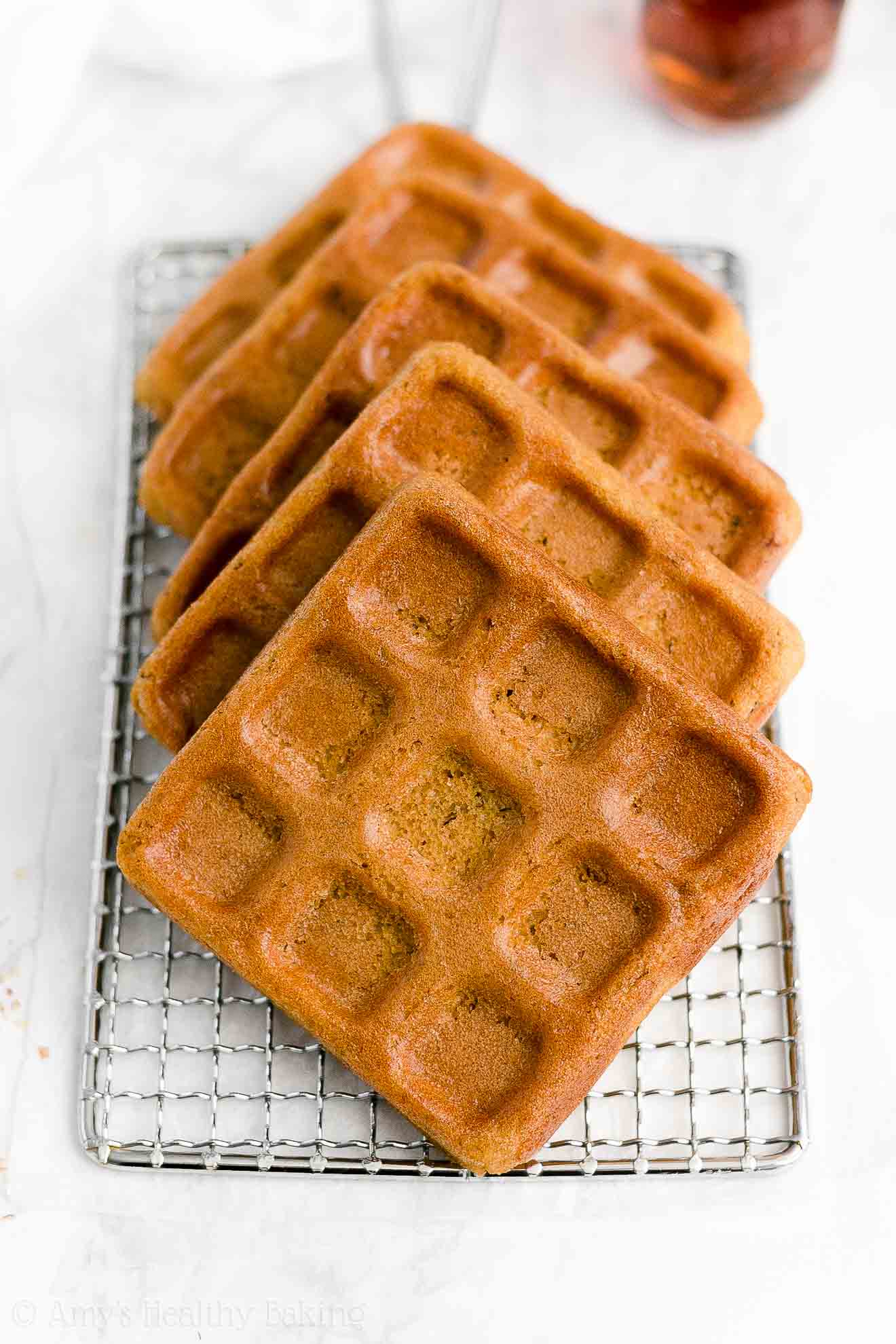 As we watched the waves gently lap against the shore and a handful of kids excitedly running in and out of the freezing water, we talked… and talked… and talked. Over a year and a half had gone by since we last saw each other, so we had lots of catching up to do!

During part of our four hours at the beach, our conversation eventually wound up on the topic of food. Not too surprising, knowing me… And since my friend worked in a bakery for many years before earning her teaching credential, she knows and enjoys talking about sweets almost as much as I do! 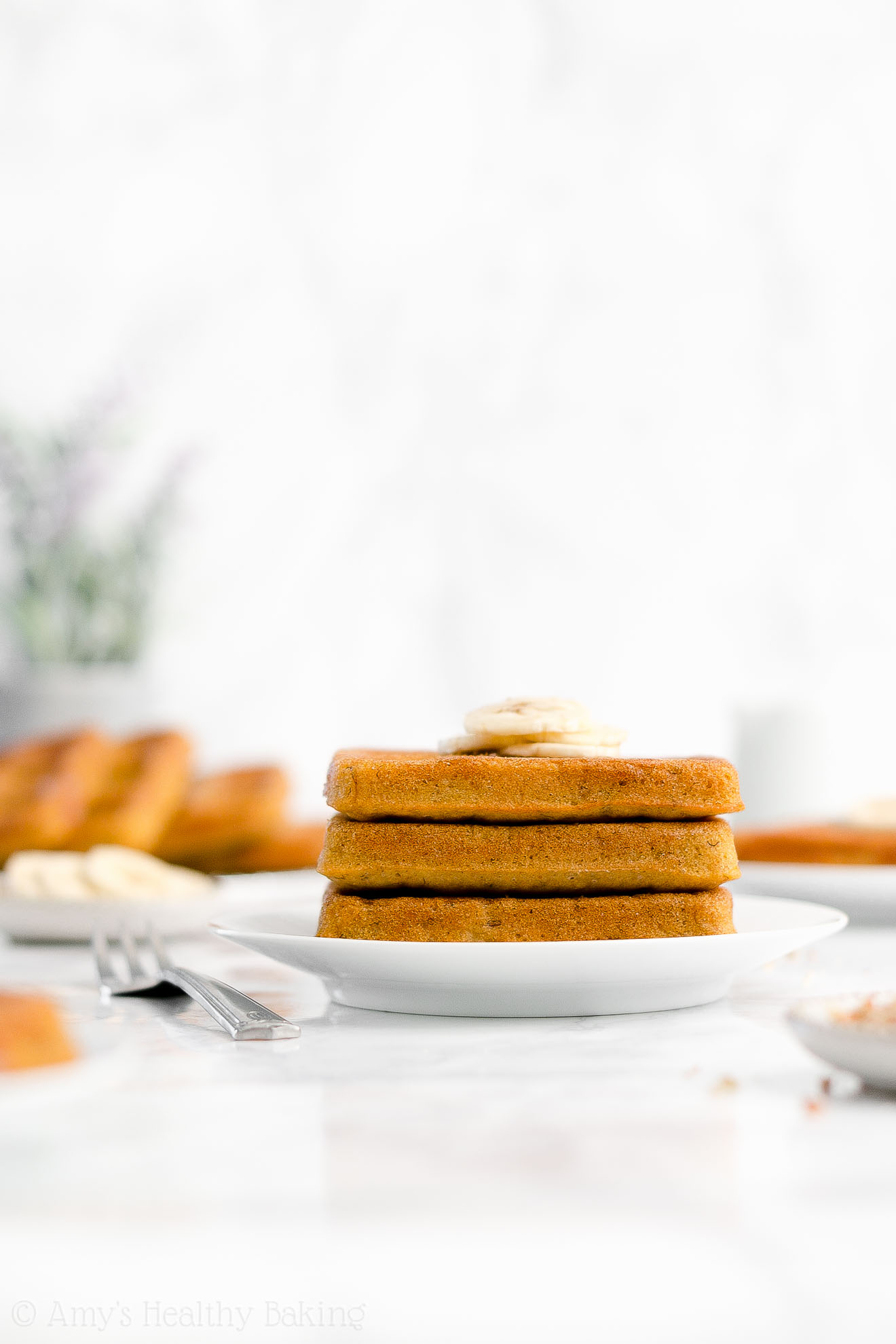 As she explained some of her newfound sensitivities, she shared that she had started eating a special variety of waffles for breakfast almost every day. She often topped them with freshly sliced bananas, strawberries, and a dollop of almond butter before dashing off to teach her TK students.

For the next few days, I couldn’t shake that fruit and waffles idea out of my head, especially the part about bananas. So when I spotted two exceptionally ripe bananas hiding behind the bright yellow ones I recently bought on my counter, I knew exactly what to do… 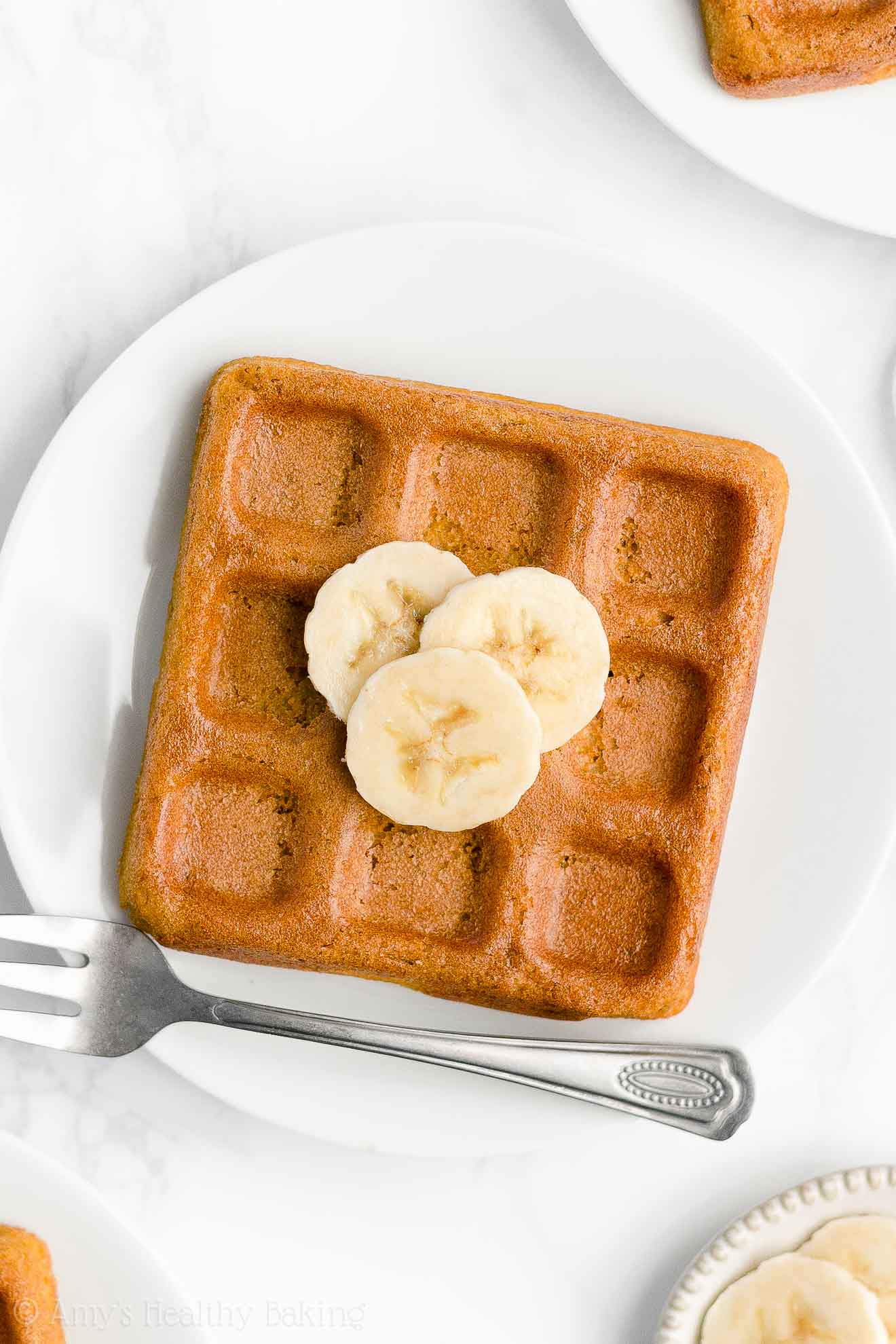 I whipped up a batch of these Healthy Banana Waffles! They’re crispy on the outside, fluffy on the inside, and the bright banana flavor shines through in every bite.

These healthy banana waffles also contain no refined flour or sugar, and they’re great for meal prepping or quick weekday breakfasts (just like the store-bought ones my friend was eating!). Yet these are just 105 calories! 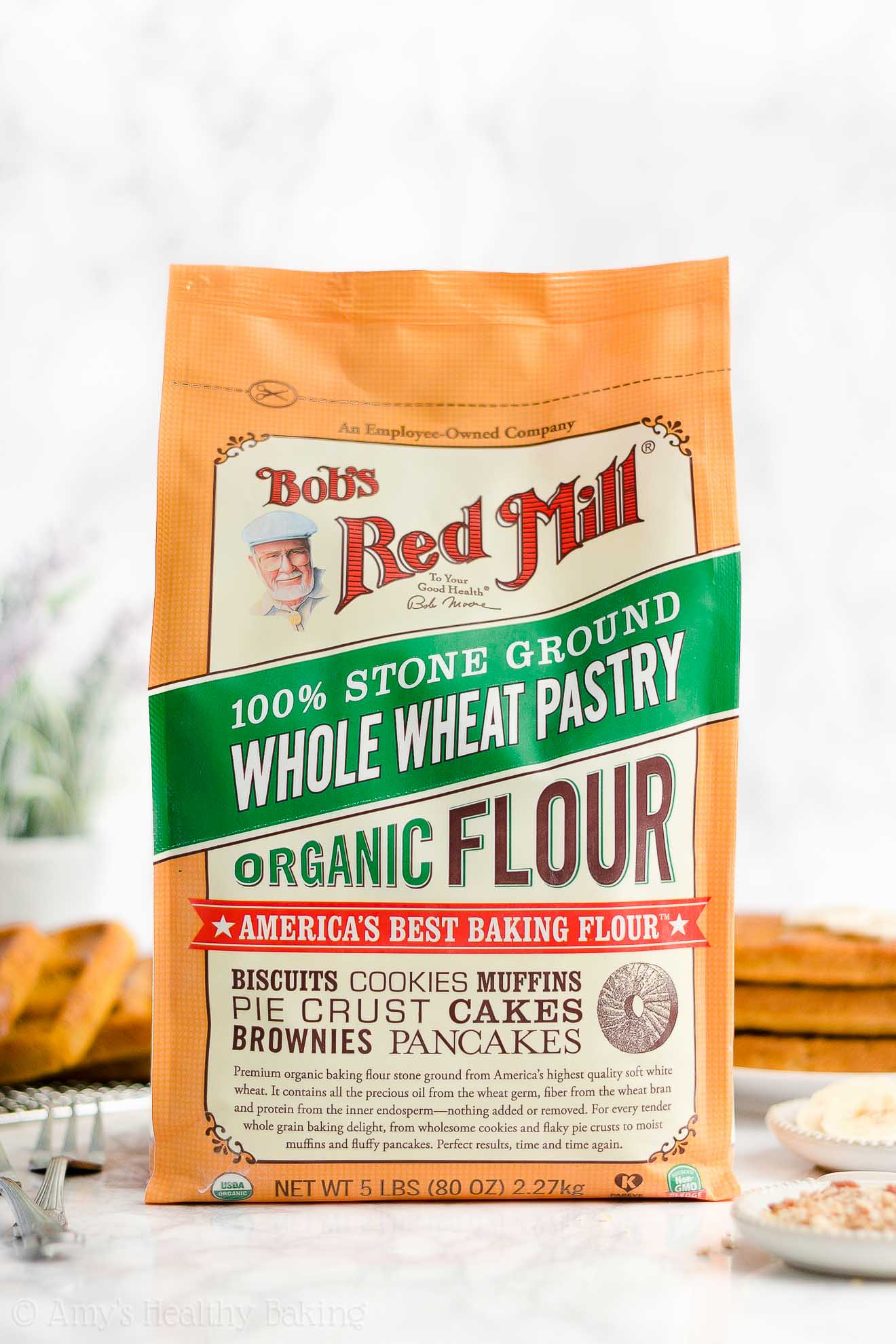 So let’s go over how to make these healthy banana waffles!

You’ll start with Bob’s Red Mill® Organic Whole Wheat Pastry Flour. It’s one of my favorite flours for baking! It’s made by finely grinding a special type of organic soft white wheat, which means it has the same health benefits as regular whole wheat flour (like extra fiber!) but a really light taste and texture. That makes it perfect for these healthy banana waffles because it lets the waffles’ fluffy texture and fruit flavor truly shine!

Just remember to measure the flour correctly, using this method or a kitchen scale. (← That’s the one I own!) Too much flour will make your waffles turn out dry, not light and fluffy. It may take a few extra moments to measure correctly, but the taste and texture of your healthy banana waffles is definitely worth it! 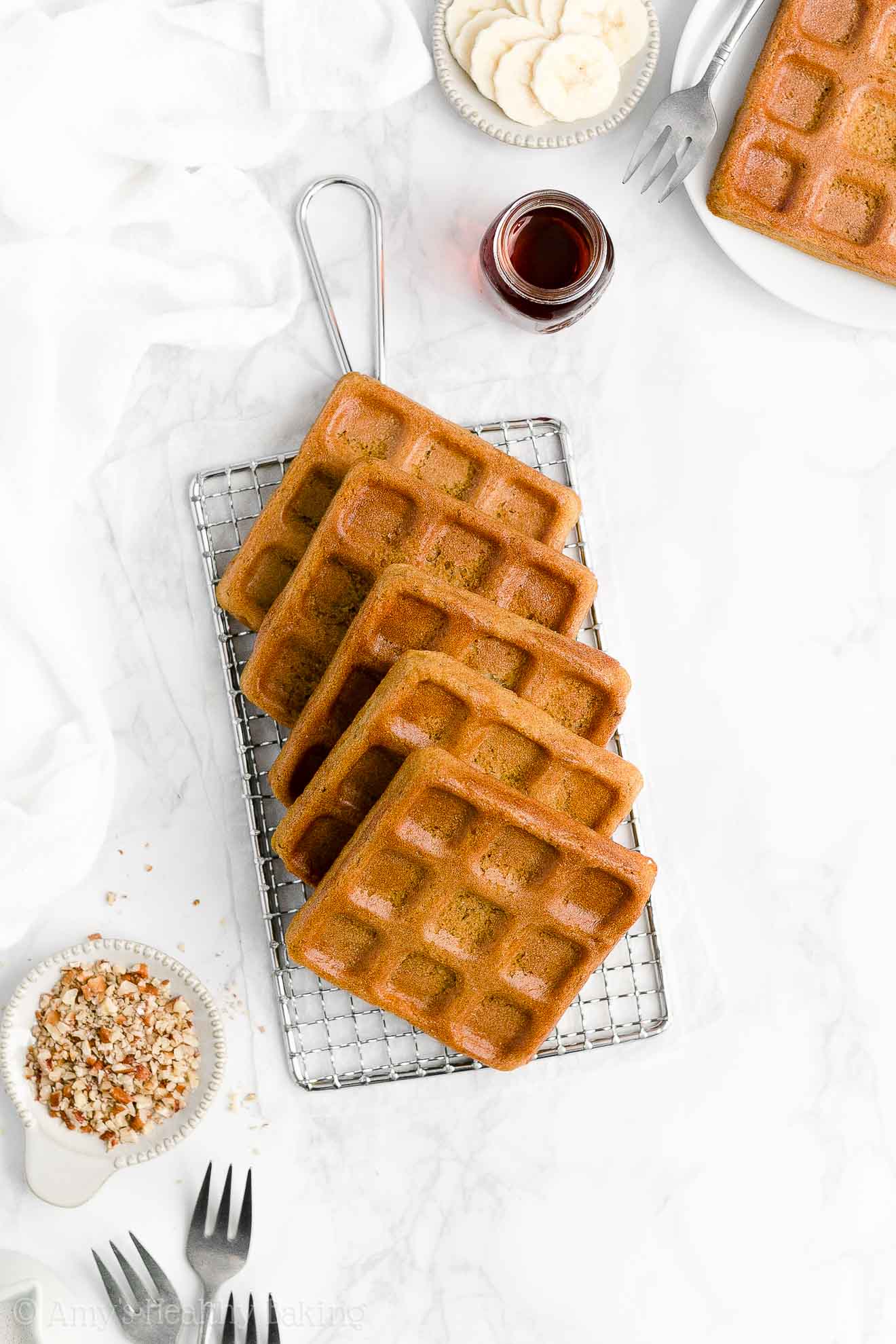 Unlike many traditional waffle recipes that call for ¼ or ½ cup of butter or oil, you only need 1 teaspoon of coconut oil. That really helps keep your healthy banana waffles low calorie and low fat!

Then with so little oil, the majority of the moist and fluffy texture on the inside of these waffles comes from… 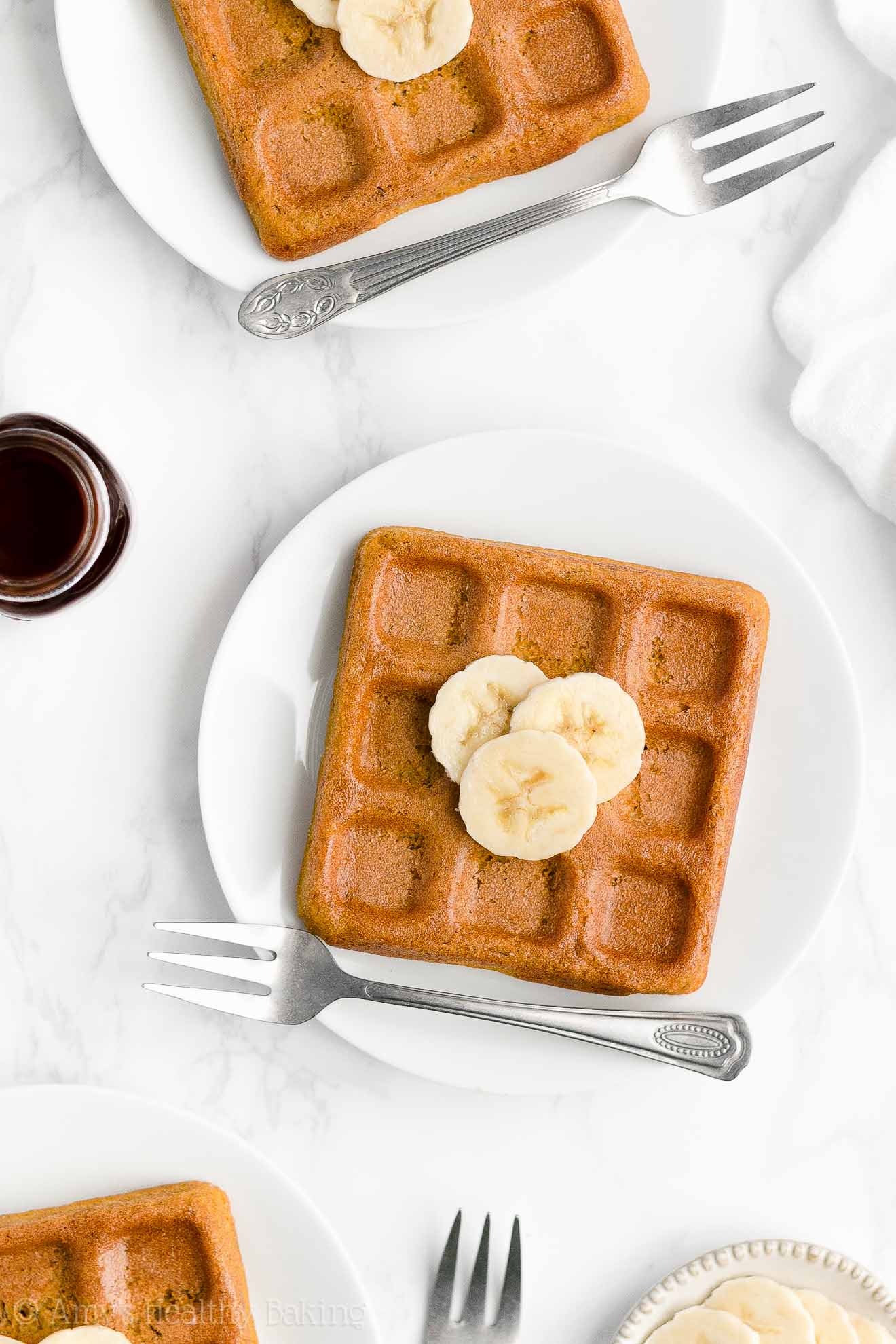 Mashed banana! But since you’re so smart, you probably guessed that, right?

The mashed banana adds lots of moisture to your batter but for a fraction of the calories. (It’s not just for flavor!) And because of this, I strongly recommend using the ripest bananas you can find. Your bananas should be almost pure brown or black!

Overripe bananas are softer and sweeter, and they add more moisture to your batter than pure yellow ones. This creates the fluffiest waffles imaginable. Overripe bananas also add a stronger flavor, which makes your healthy banana waffles even tastier! 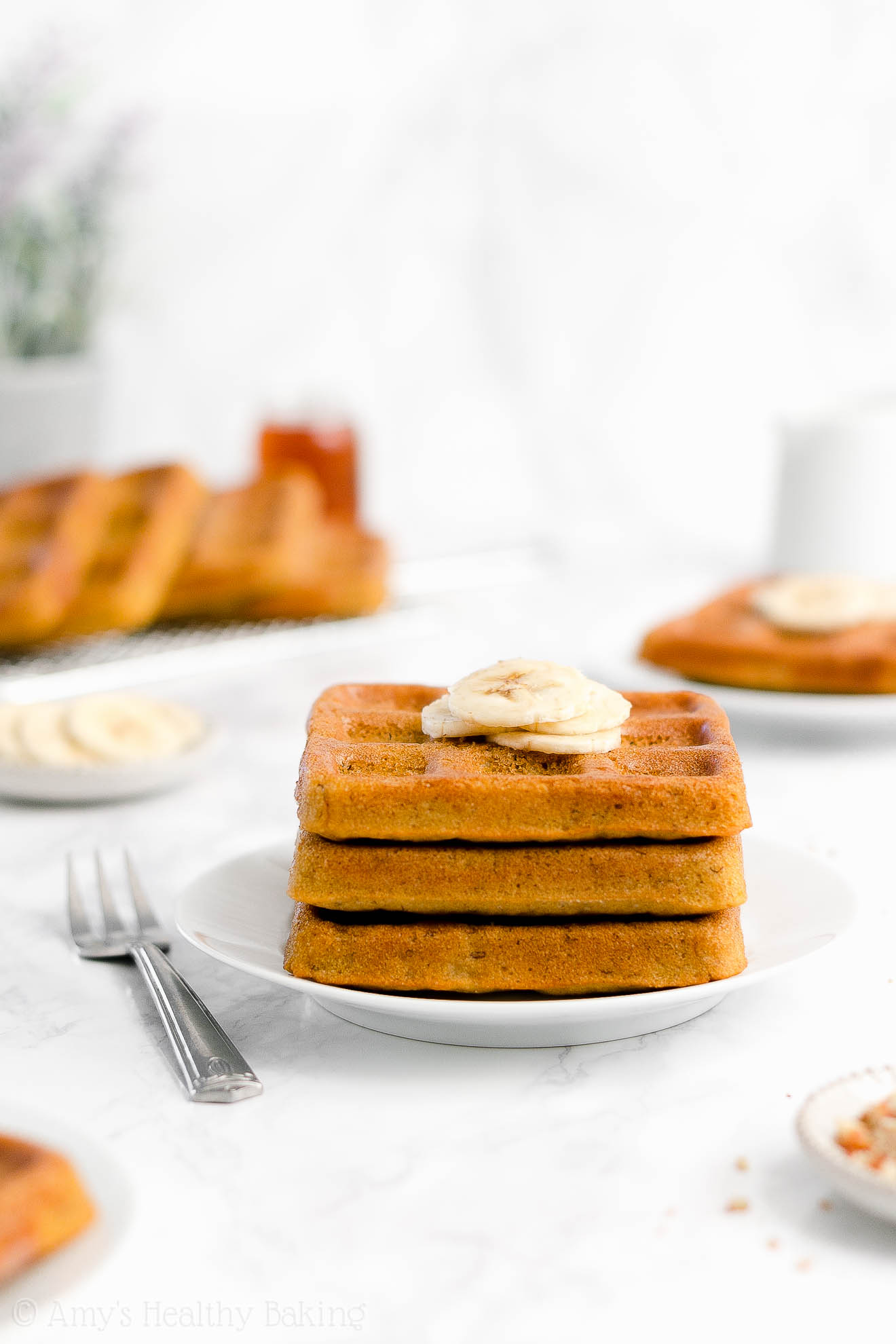 You’ll mix white vinegar into the batter! No, I haven’t lost all my marbles… This is intentional—and I promise you can’t taste it in your finished waffles!

The vinegar (an acid) reacts with the baking soda (a base). When they react, it creates air bubbles. Those air bubbles make your healthy banana waffles rise, and it also gives them a more light and tender texture. 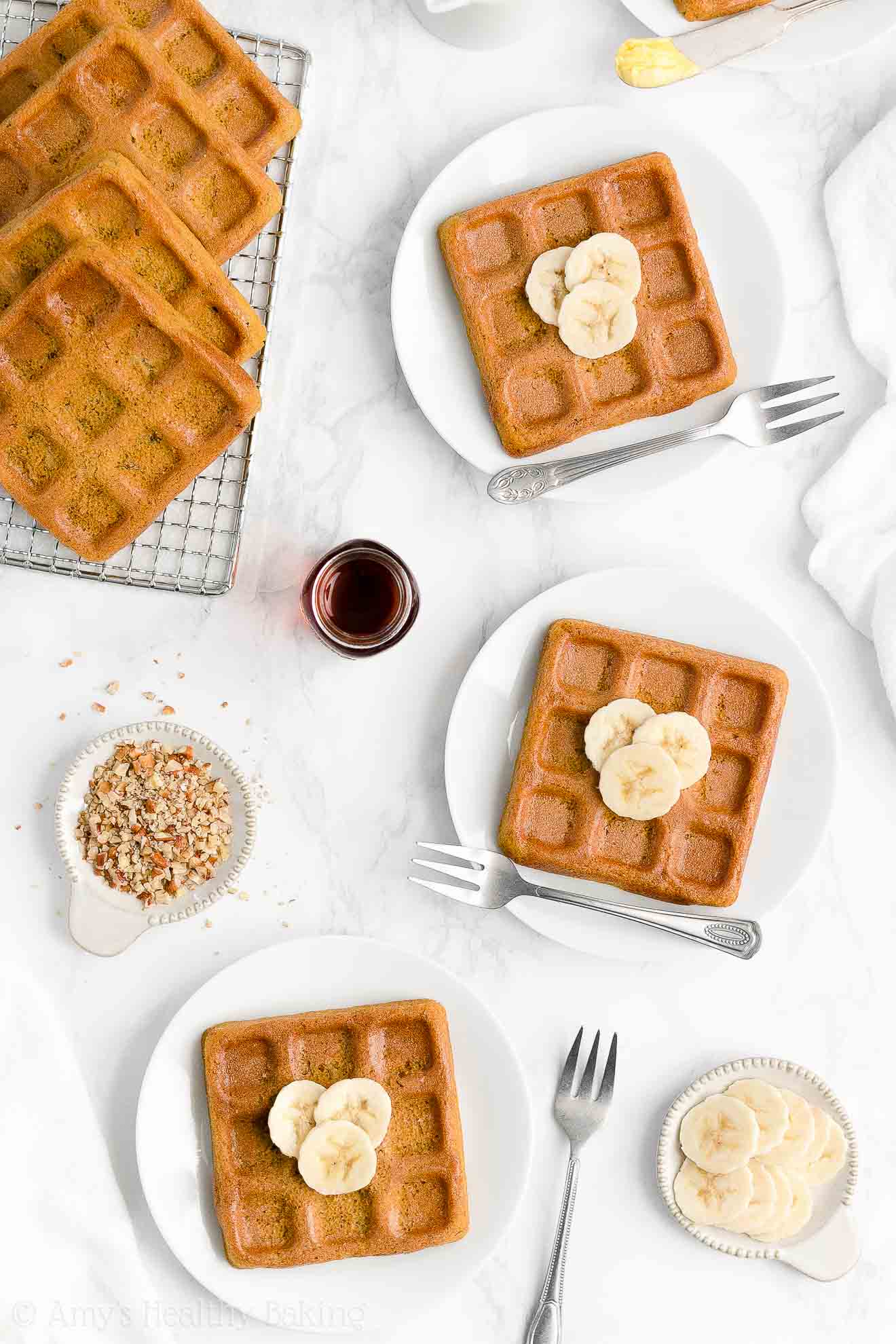 One of the things I strongly dislike about cooking waffles is baby-sitting the waffle iron. Does that bug you too? Cooking one waffle at a time, either resulting in everyone eating in shifts or heating up the oven to keep all of the waffles warm…

And somehow, I usually cook pretty lopsided waffles, where the batter doesn’t quite make it to the edges of the waffle iron so the waffles don’t turn out full and beautiful. Whoops.

But I have a solution for that! 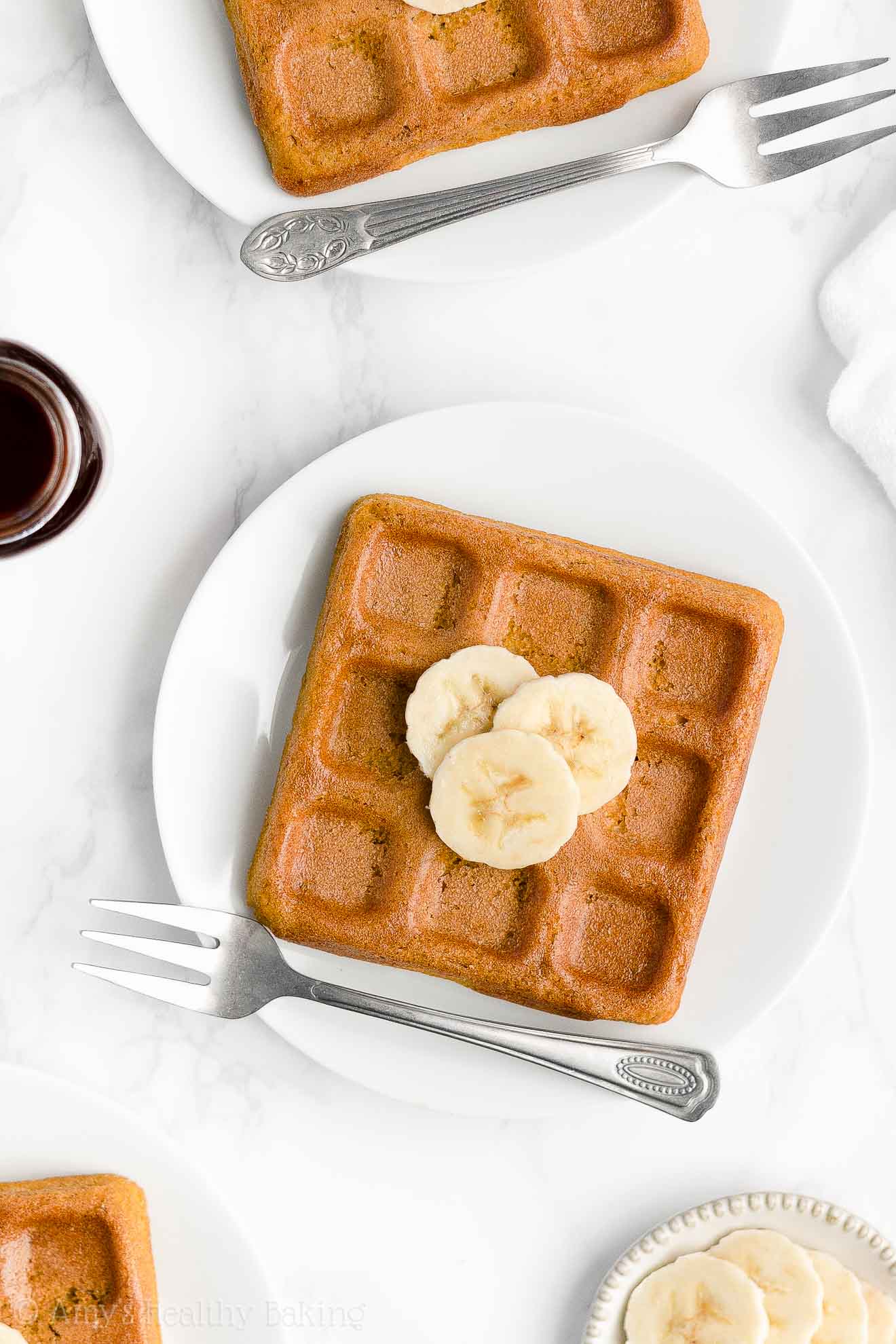 You’ll bake these healthy banana waffles in the oven instead! I use these handy waffle pans. Although I usually avoid buying “one use” pans, these ones are worth every penny. All of my waffles finish baking at the same time, I don’t have to baby-sit (or clean!) the waffle iron, and the pans still work just as well as the day I bought them. Win-win-win!

There’s just one downside to baking waffles in the oven… 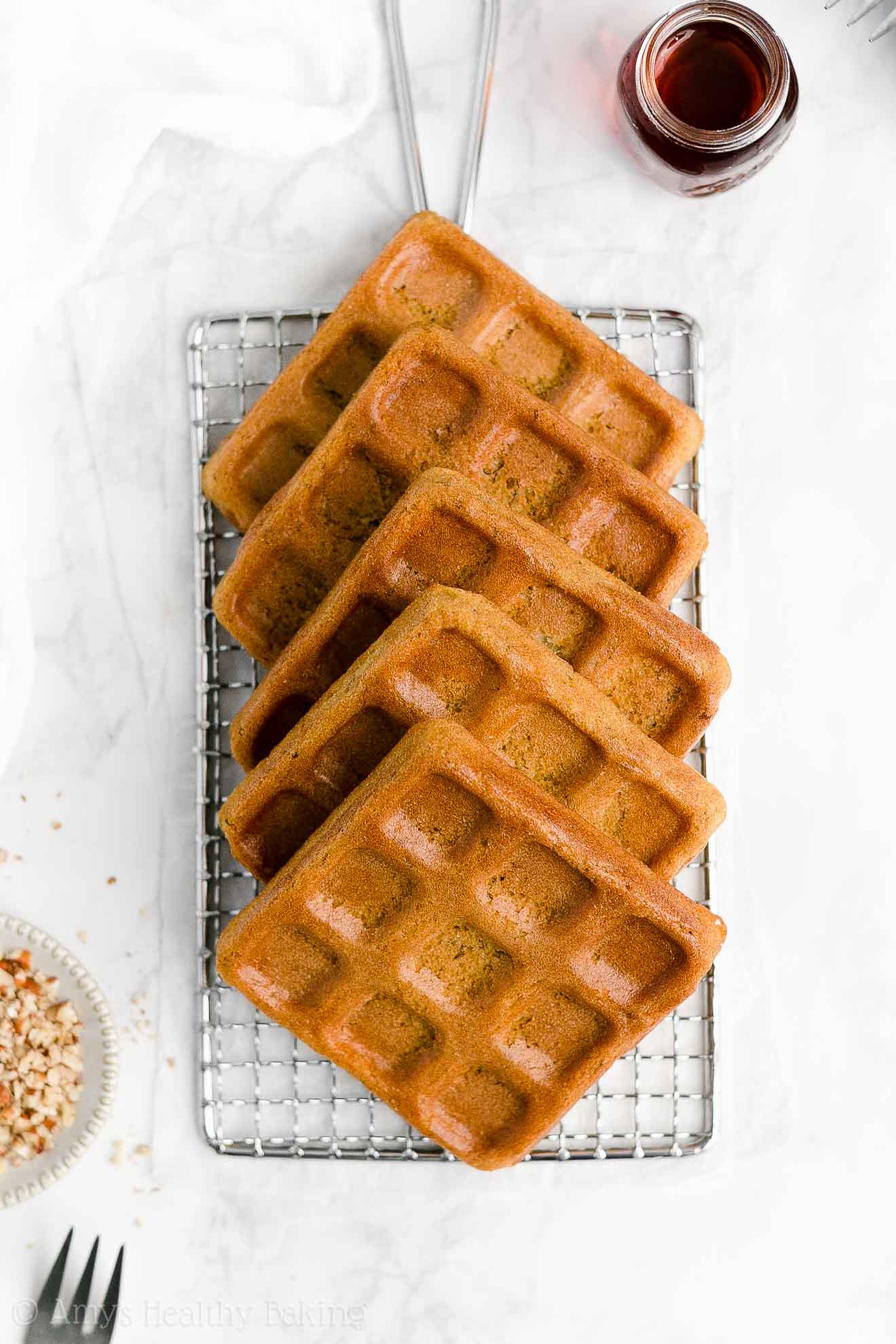 The insides turn out really moist and fluffy, but so do the outsides! And I prefer my waffles to be crispy on the outside… Not fluffy.

So my special trick? 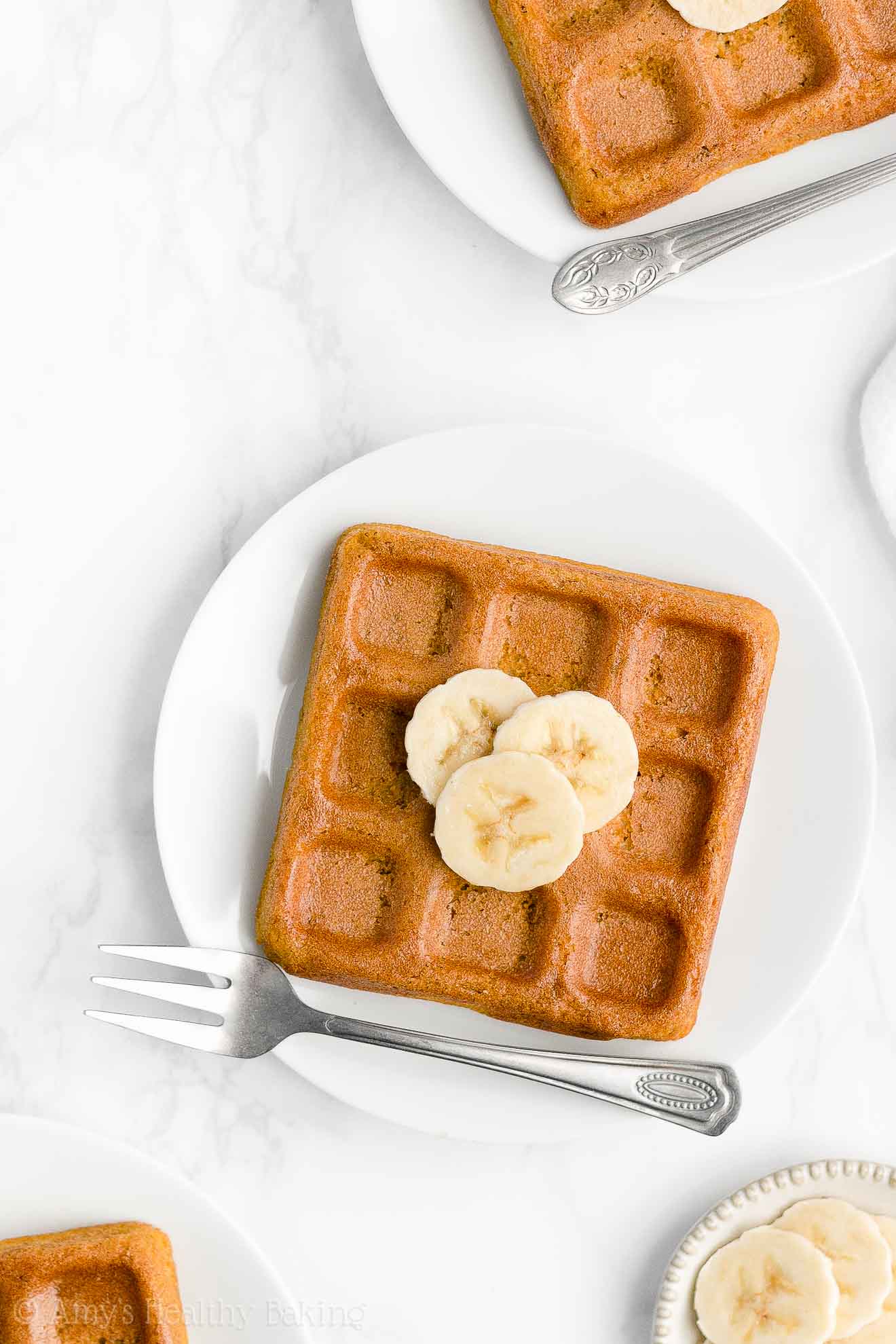 I pop my waffles in the toaster oven! After a quick trip in the toaster, the outsides are perfectly crispy, while the insides stay tender and fluffy. It’s the perfect texture for waffles, don’t you think? 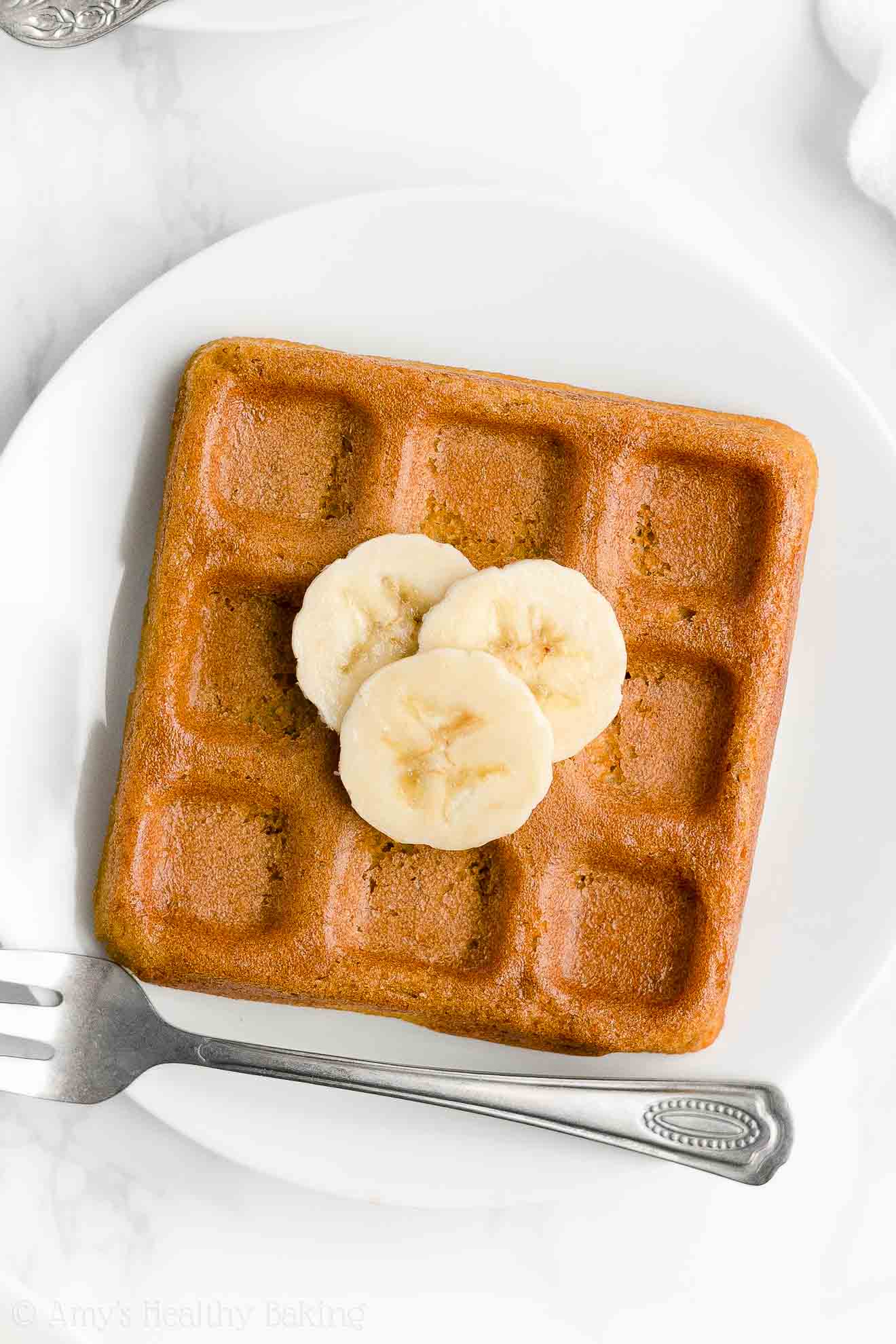 Now the only question is… Do I have enough ripe bananas to make a double batch?? ???? And when you make your own, remember to snap a picture and share it on Instagram using #amyshealthybaking and tagging @amyshealthybaking IN the photo itself! (That guarantees I’ll see your picture! ????) I’d love to see your healthy banana waffles!

Click here to PIN the recipe and save it for later!
Yields: 12 waffles
These banana waffles are crispy on the outside, fluffy on the inside, and packed with bright fruit flavor. They’re great for meal prepping and quick grab-and-go breakfasts! My family loves them warm with a small pat of butter and generous drizzle of pure maple syrup, but I also enjoy them plain with fresh fruit on top. Leftover waffles will keep for at least one week if stored in an airtight container in the refrigerator, and they freeze well, too!
Notes: For the gluten-free flour, use Bob’s Red Mill Gluten-Free 1-to-1 Baking Flour. It works just as well!

Use bananas that are almost purely brown or black! These overripe bananas are softer, sweeter, and have a stronger flavor. The waffles won’t have as great of a flavor or texture if you use bananas that are mostly yellow. Also, measure the banana with cups or grams. Not all "extra large" bananas are the exact same size!

Any milk may be substituted for the unsweetened cashew milk.

These are the waffle pans that I use. They’re totally affordable and worth every penny! I baked waffles at least once a week for two months straight, and the pans still acted like they were as good as new!

Make sure to generously coat your waffle pans with cooking spray! The waffles tend to stick to the pans if you don’t spray them well.

This post was sponsored by Bob’s Red Mill®. As always, all text, opinions, photographs, and recipe are my own. To find Bob’s Red Mill® products at a store near you, use their handy store locator here!

The Healthier Chocolate Treats cookbook is perfect for any and all chocolate lovers. Whether you enjoy chocolate occasionally or every single day (that’d be me!), there are plenty of goodies inside for you! Healthier Chocolate Treats contains 50+ brand new healthier recipes. These recipes have never been seen before or appeared on my blog. You won’t find them anywhere else! And yes—every single one contains some form of chocolate. Whether you prefer milk, dark or white, there are lots of treats inside for you!     What Inspired You to Write Healthier Chocolate Treats? I have always loved chocolate. Every Halloween throughout my childhood, I inverted the entire contents of my bright … END_OF_DOCUMENT_TOKEN_TO_BE_REPLACED