JUMP TO RECIPE PRINT RECIPE
Learn how to make these delicious cinnamon scones from scratch! They’re supremely moist with lots of cozy spice flavor, and you just need one bowl to make them! They also have no eggs, heavy cream, refined flour or sugar and 132 calories! 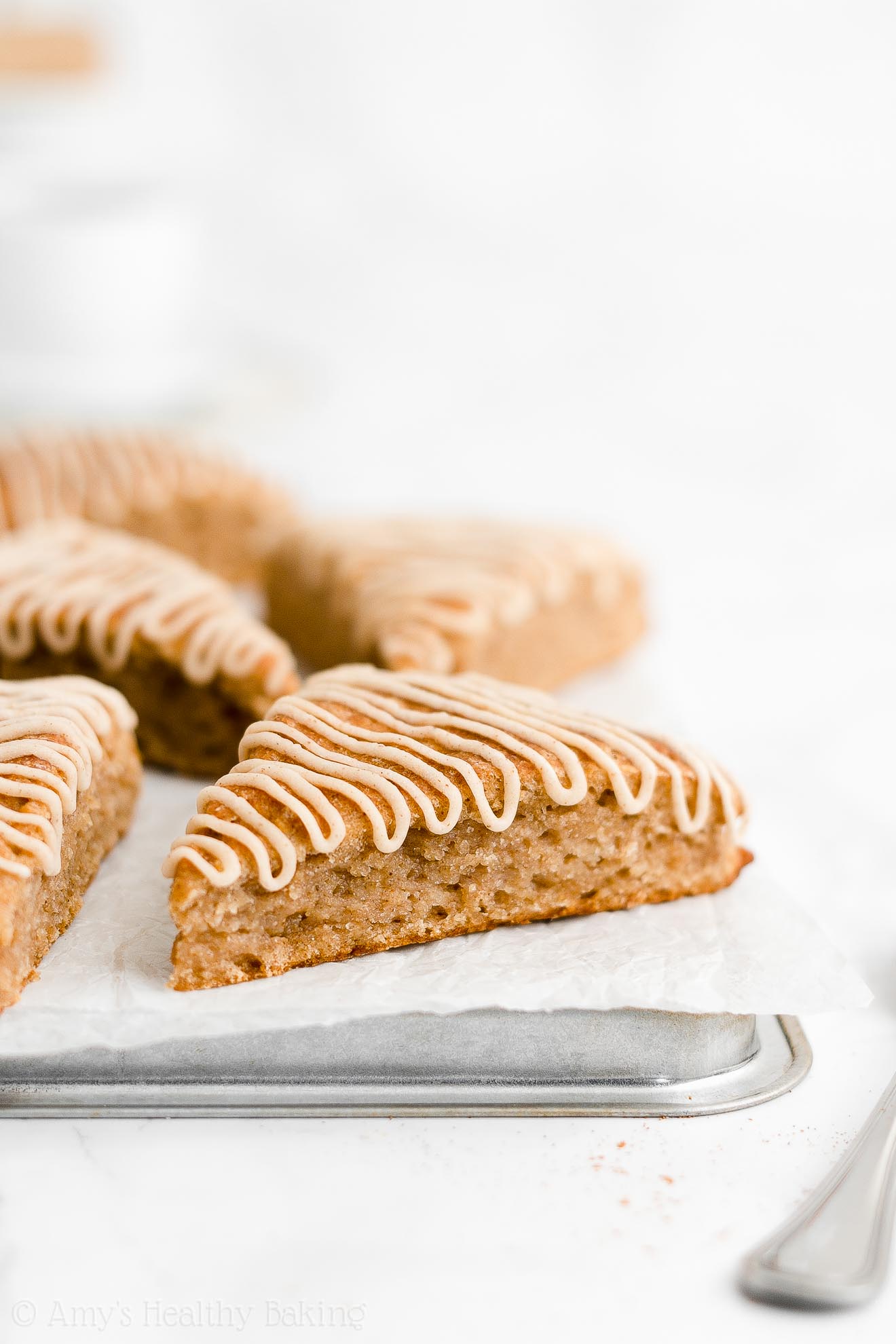 Over the holidays, my parents and brother traveled to Southern California to spend Christmas with my grandma and me. They brought their two sweet golden retrievers, and when combined with Grandma’s two terriers and my own little pup, we ended up with a fairly full house… And just as many dogs as people!

While relaxing at Grandma’s on Christmas Eve and Christmas Day, in between rounds of honey-baked ham and kale salads and our all-time favorite cookies, my family suggested that we put on an episode or two of the Great British Baking Show Masterclass. My parents had recently started watching the series hosted by Mary Berry and Paul Hollywood after finishing all seasons of the regular Great British Baking Show, so my grandma quickly found it on Netflix and pressed play. 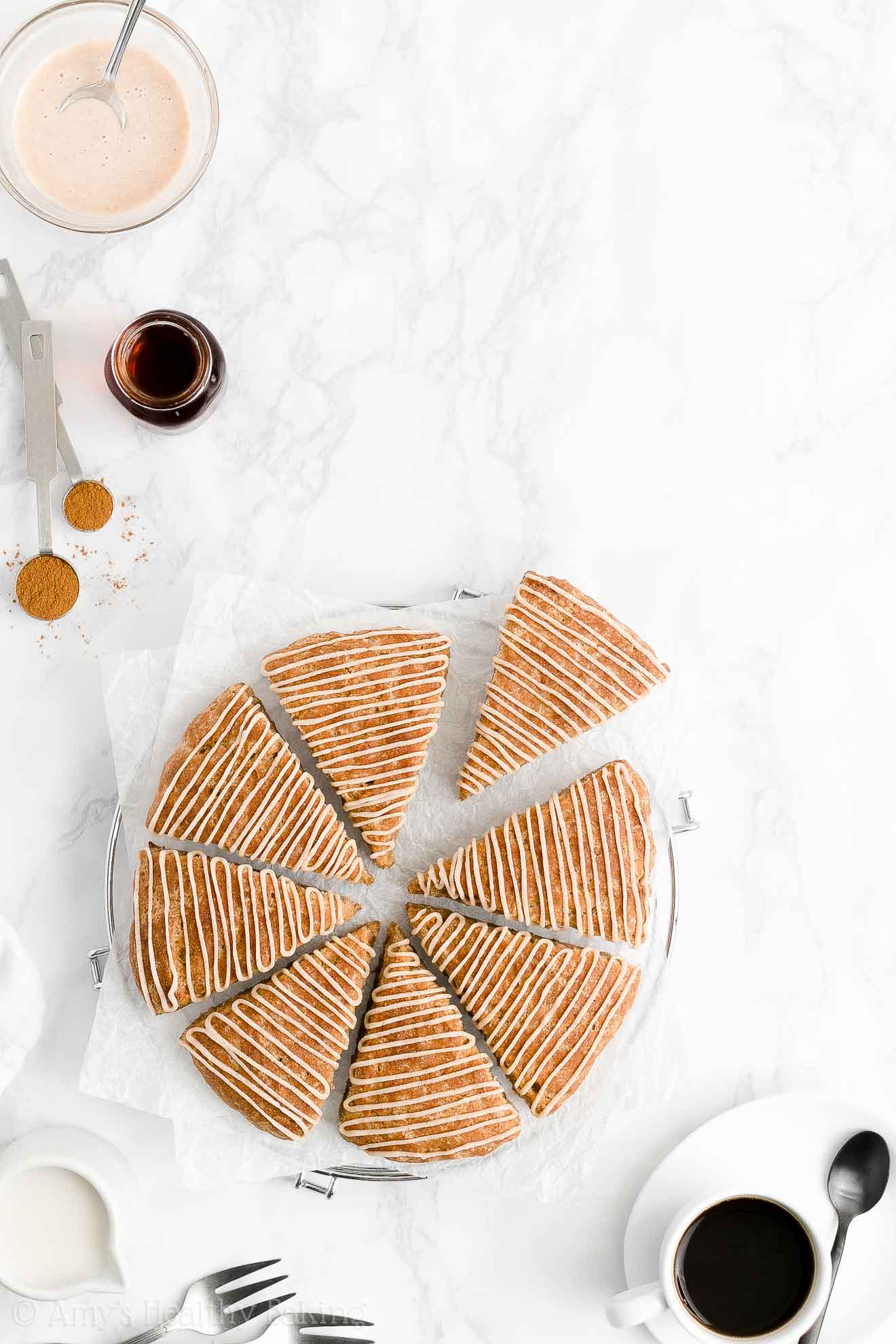 In each show, the two British baking experts demonstrated how they prepared three or four of the recipes that they had challenged the contestants to whip up each week. Although a few were savory, like meat pies and sausage braids, the majority of their bakes firmly fell on the sweet side of the spectrum, like raspberry and chocolate donuts, a baked Alaska, triple chocolate entremets, an apricot tart…

Which meant almost everyone in my family headed straight for the platters of sugar cookies, thick brownies, and decadent chocolate fudge sitting in the kitchen the moment the episodes finished. Mary and Paul definitely know how to make their audience hungry and start craving sweets! 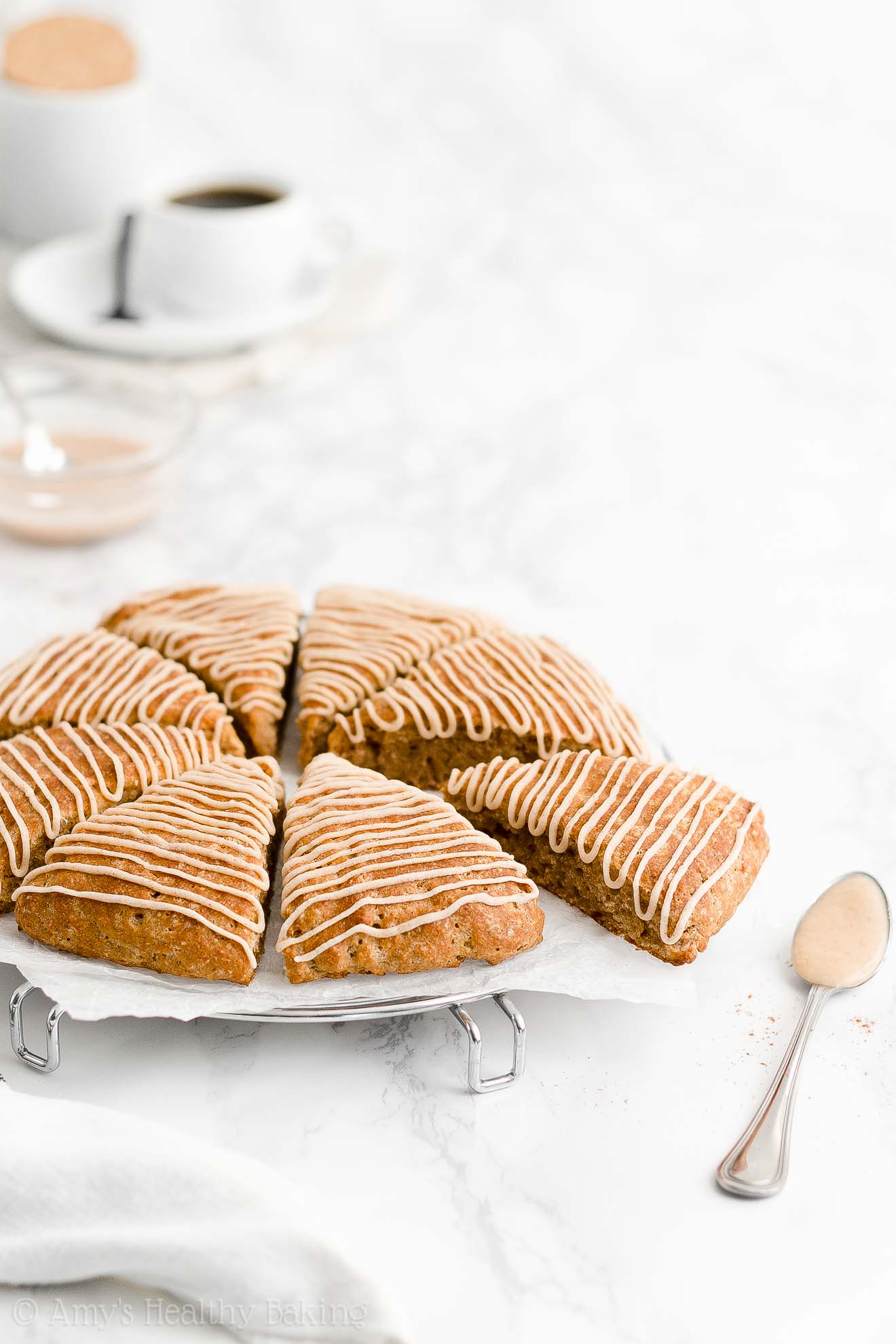 Regardless of sweet or savory, most of the recipes they baked were a bit more advanced and involved with multiple components, interesting techniques, and unique ingredients. As a result, my family would turn to me to ask for clarification every few minutes throughout each episode, especially for explanations of the metric measurements and British ingredient terms, and that made my heart glow… I felt like a little baking translator!

Yet in one particular segment, Mary and Paul asked the contestants to create an assortment of scones that could be served during an afternoon tea. With how simple they were to make, they didn’t give the bakers much time… But it was still so fun to see the fun flavor combinations the bakers created! 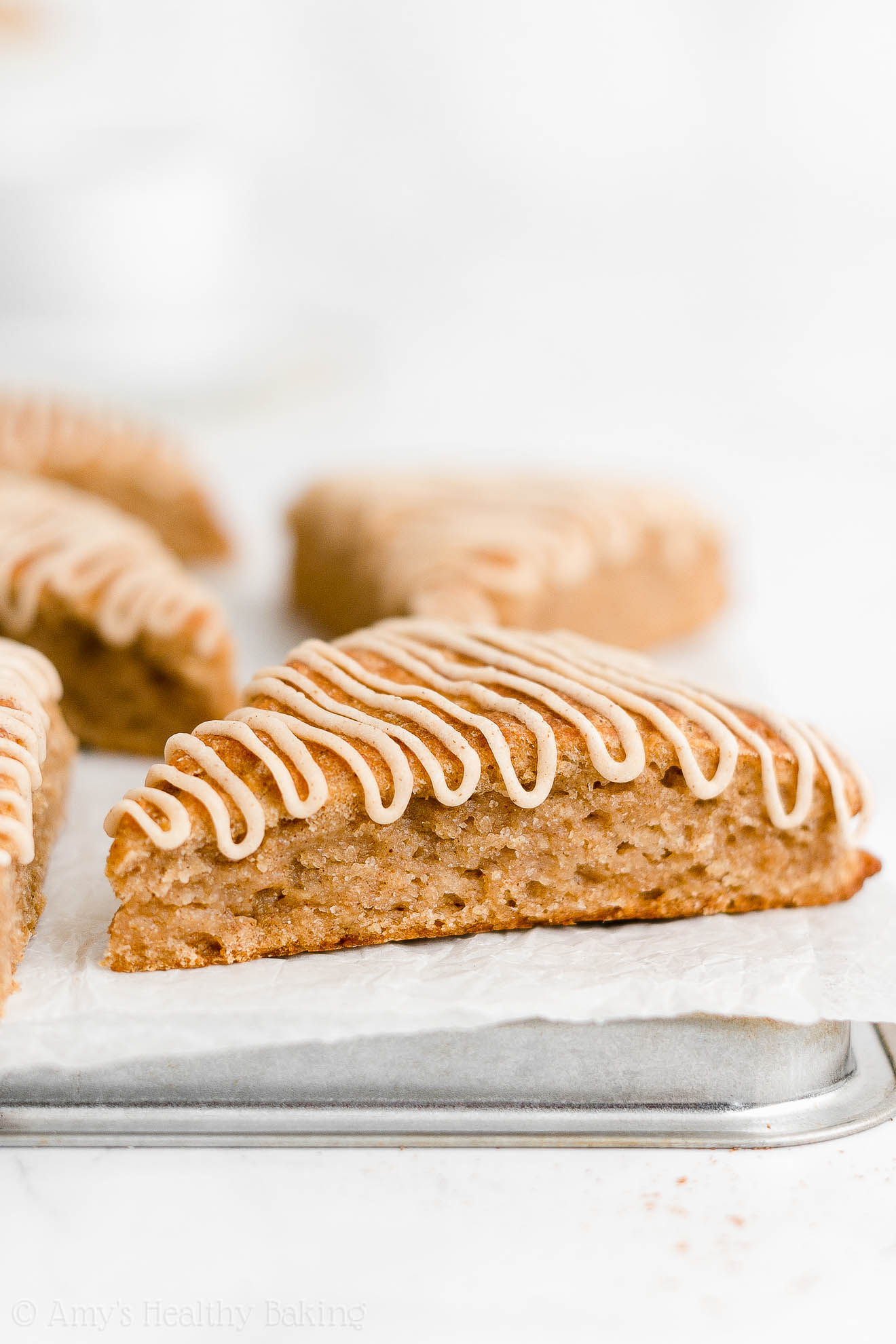 When that specific show ended, I realized it had been a few months since I last baked my own batch of scones… Which inspired me to make these Healthy Cinnamon Scones shortly after to satisfy my cravings!

These healthy pastries are simple to make, and just like the recipe title implies, you just need one bowl. (I always love recipes like this with fewer dishes to wash!) They’re also supremely moist with lots of cozy cinnamon spice flavor. Yet unlike the ones from the Great British Baking Show, these healthy cinnamon scones contain no eggs, heavy cream, refined flour or sugar… And they’re 132 calories! 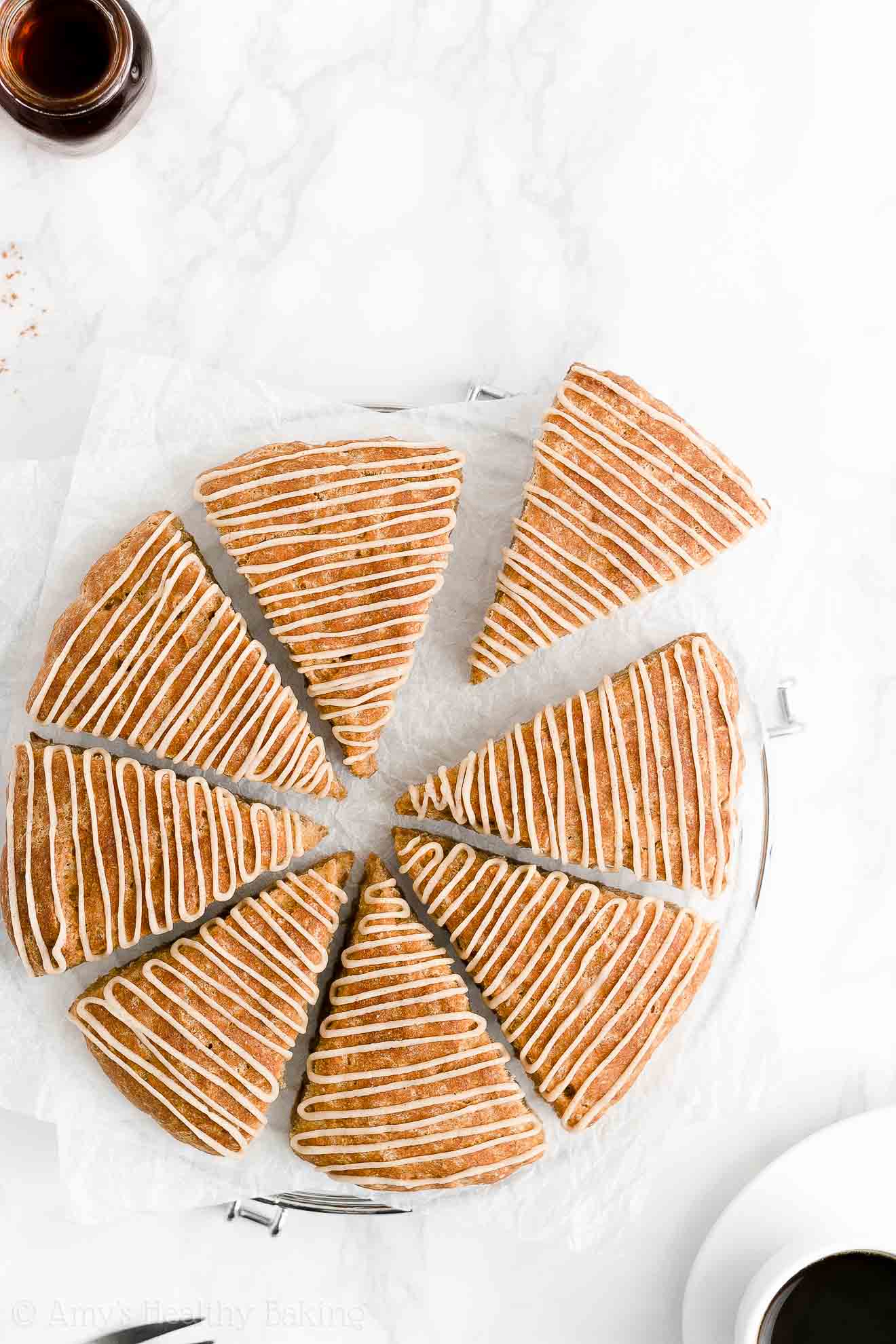 HOW TO MAKE THE BEST HEALTHY CINNAMON SCONES

Let’s go over how to make these healthy one-bowl eggless cinnamon scones! This easy recipe starts with — yup, you guessed it! — one medium mixing bowl. In that bowl, you’ll whisk together white whole wheat flour, cinnamon, baking power, and salt.

Hint: I’ve shared my top two gluten-free flour options in the Notes section of this recipe, if you’d like to make your healthy cinnamon scones gluten-free!

As for the spice, not all cinnamon is created equal. In recipes like this, where the spice flavor is the star of the show, I always prefer using this type of cinnamon. (← I actually buy it online at that link. It’s super affordable and worth every penny!) It’s my favorite cinnamon, and it’s the only one I use in my baking now! That’s because it tastes richer, warmer, and sweeter than “regular” cinnamon. I highly recommend trying it, if you haven’t already! 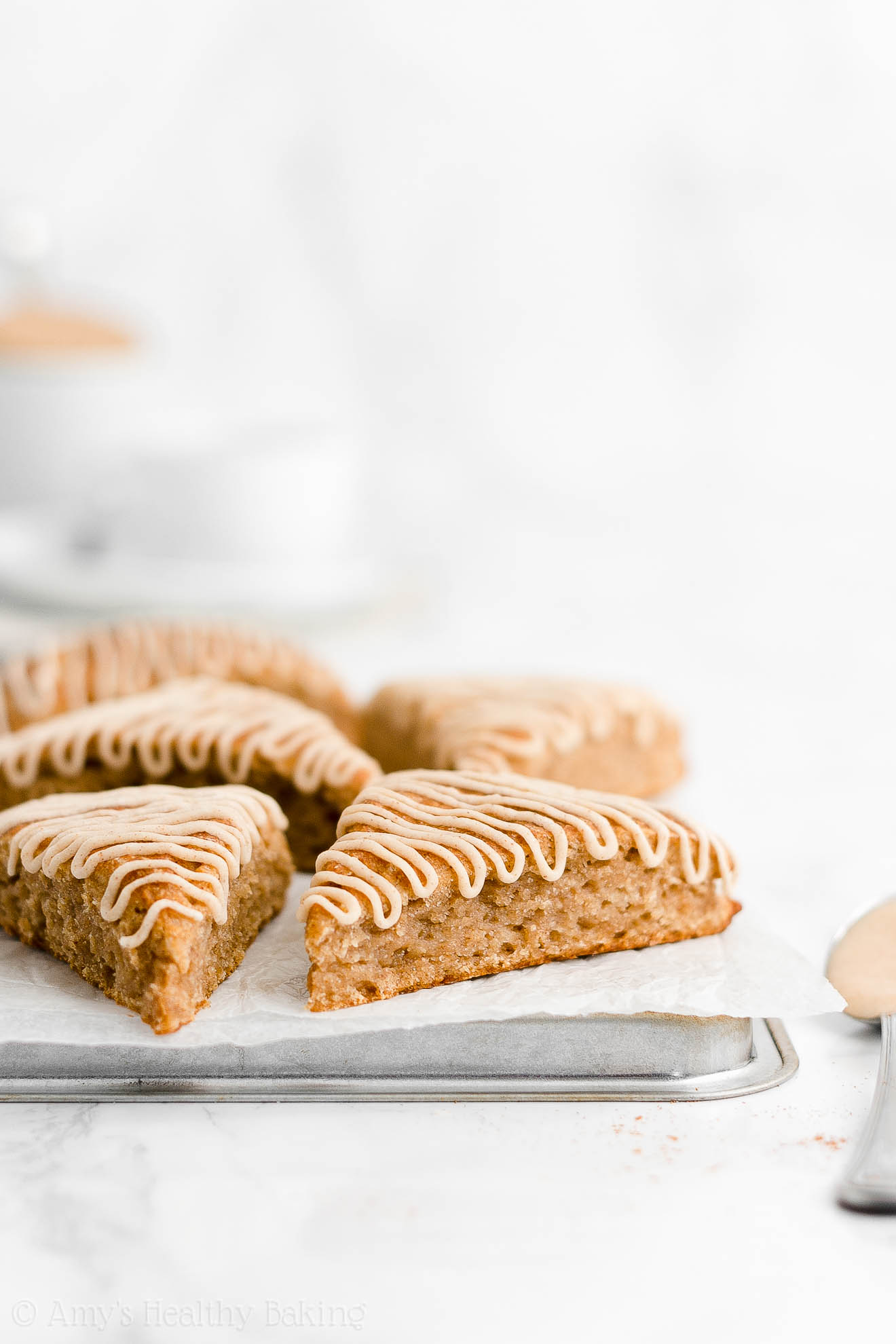 It’s also really important that your butter is cold. Freezing isn’t necessary — straight from the fridge is fine! This cold temperature is key because the butter creates tender little pockets in the dough when it melts in the oven, which helps create that iconic and incredible moist scone texture. If it starts to soften or melt ahead of time, you miss out on that texture. So keep your butter as cold as possible!

Tip: To make it much easier to work into the flour, I highly recommend using a pastry cutter like this! (It’s great for making pie crusts too… And even mashing bananas for banana bread!) 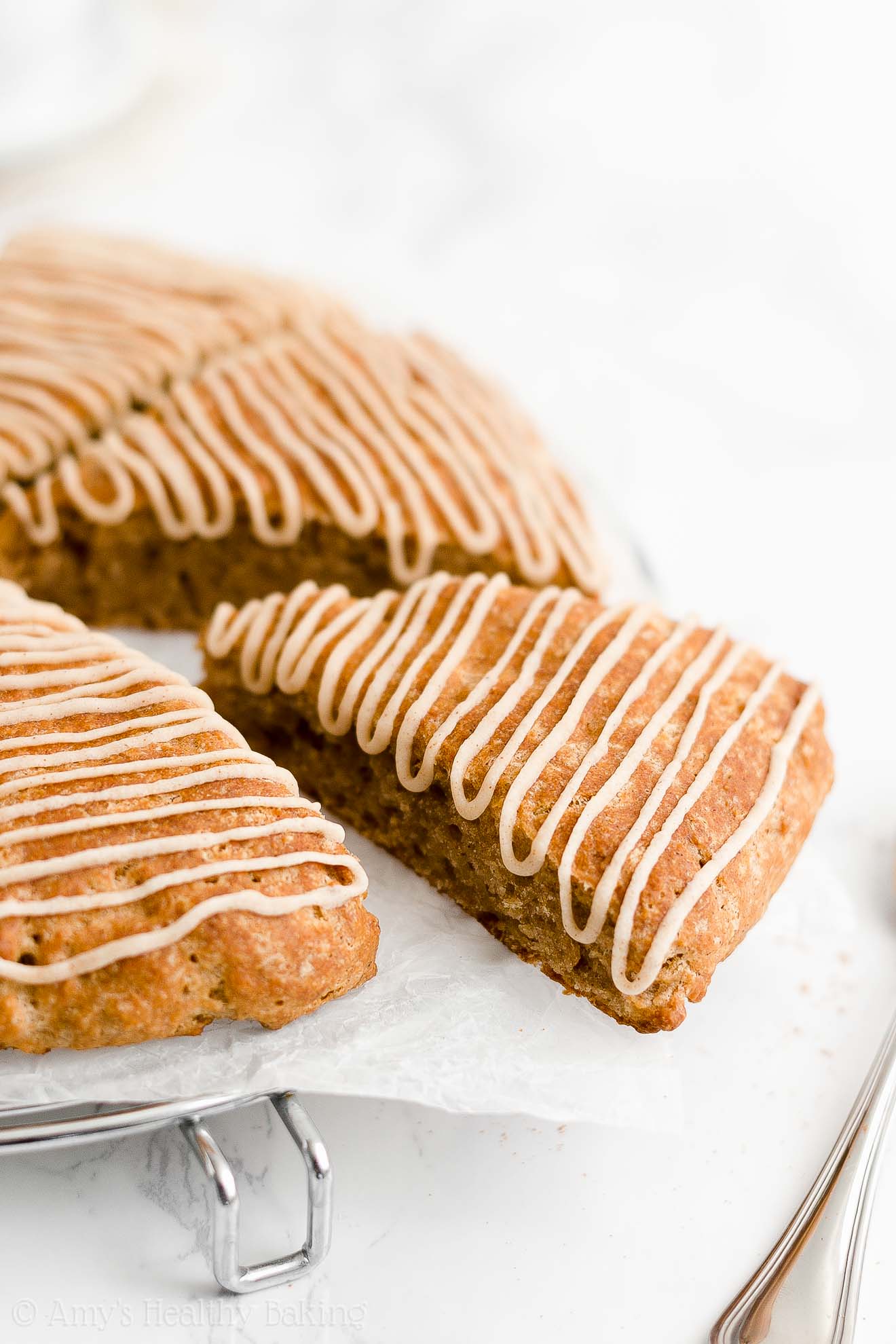 Instead of heavy cream or extra butter, like in traditional recipes, you’ll add Greek yogurt to your scone dough. It adds the same moisture but for a fraction of the calories, and it gives your healthy one-bowl eggless cinnamon scones a protein boost too!

Tip: Because the Greek yogurt adds so much moisture to the dough, you don’t need any eggs either… So these healthy cinnamon scones are also egg free!

Then you’ll skip the refined sugar and sweeten your healthy cinnamon scones with pure maple syrup. You want the kind that comes directly from maple trees! Don’t use pancake syrup or sugar-free syrup; those contain corn syrup or artificial ingredients, which we’re avoiding in this healthier recipe. The only ingredient on the label should be “maple syrup,” and it generally comes in thin glass bottles or squat plastic jugs (like this!). 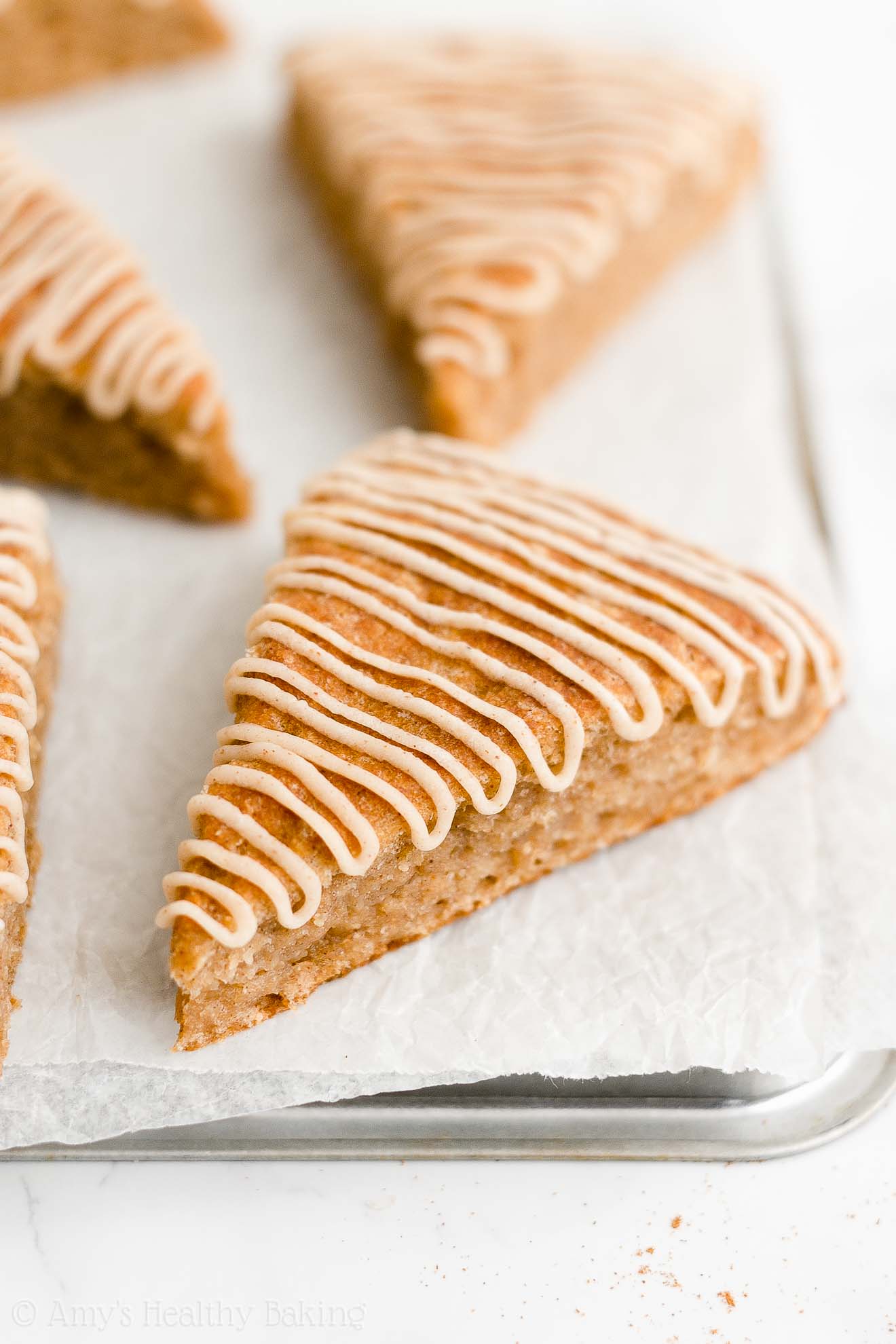 Once you’ve mixed together your dough, you’ll turn it out onto a baking sheet lined with a silicone baking mat (← my favorite!) or parchment paper and shape it into a circle. The dough should be pretty sticky, so use a spatula to do this — not your hands! Next, you’ll brush the tops and sides with milk. This seals moisture into the dough, which yields incredibly tender and moist healthy cinnamon scones, and it also creates a hint of a crust on the outside. I love that slight texture contrast!

Finally, just before sliding the baking sheet in the oven, slice your dough circle into 8 triangular wedges. No need to separate them! I always leave mine touching so that the sides stay just as moist as the insides. (That and… I’m lazy! 😉 )

Once your scones are completely cool — and not before! — you can top them with a simple cinnamon glaze. I love the spice and sweetness boosts it adds! However, if you noticed my comment above… I sometimes feel a bit lazy and skip the drizzle. 😉 Both the plain and the drizzled healthy cinnamon scones taste equally delicious! 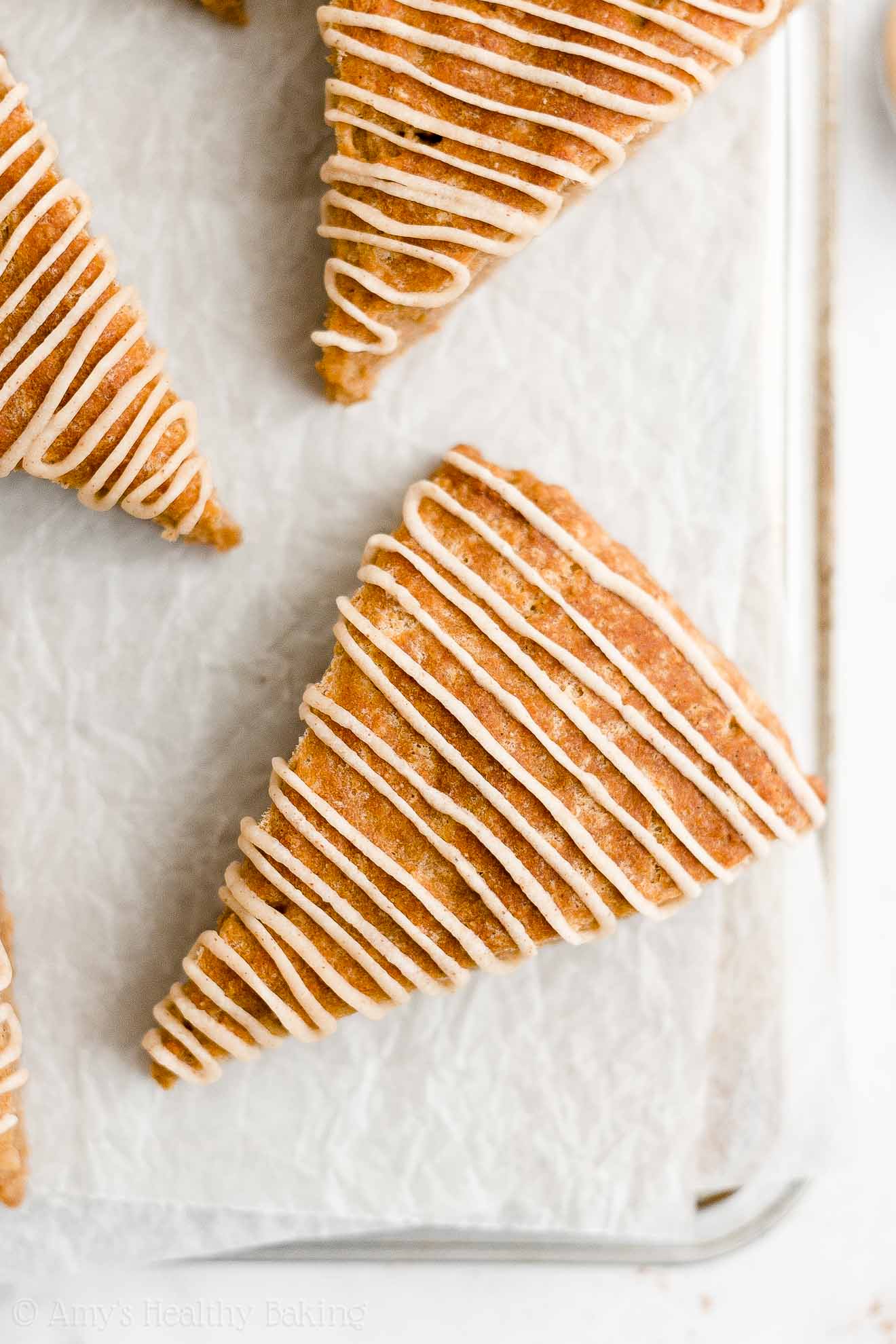 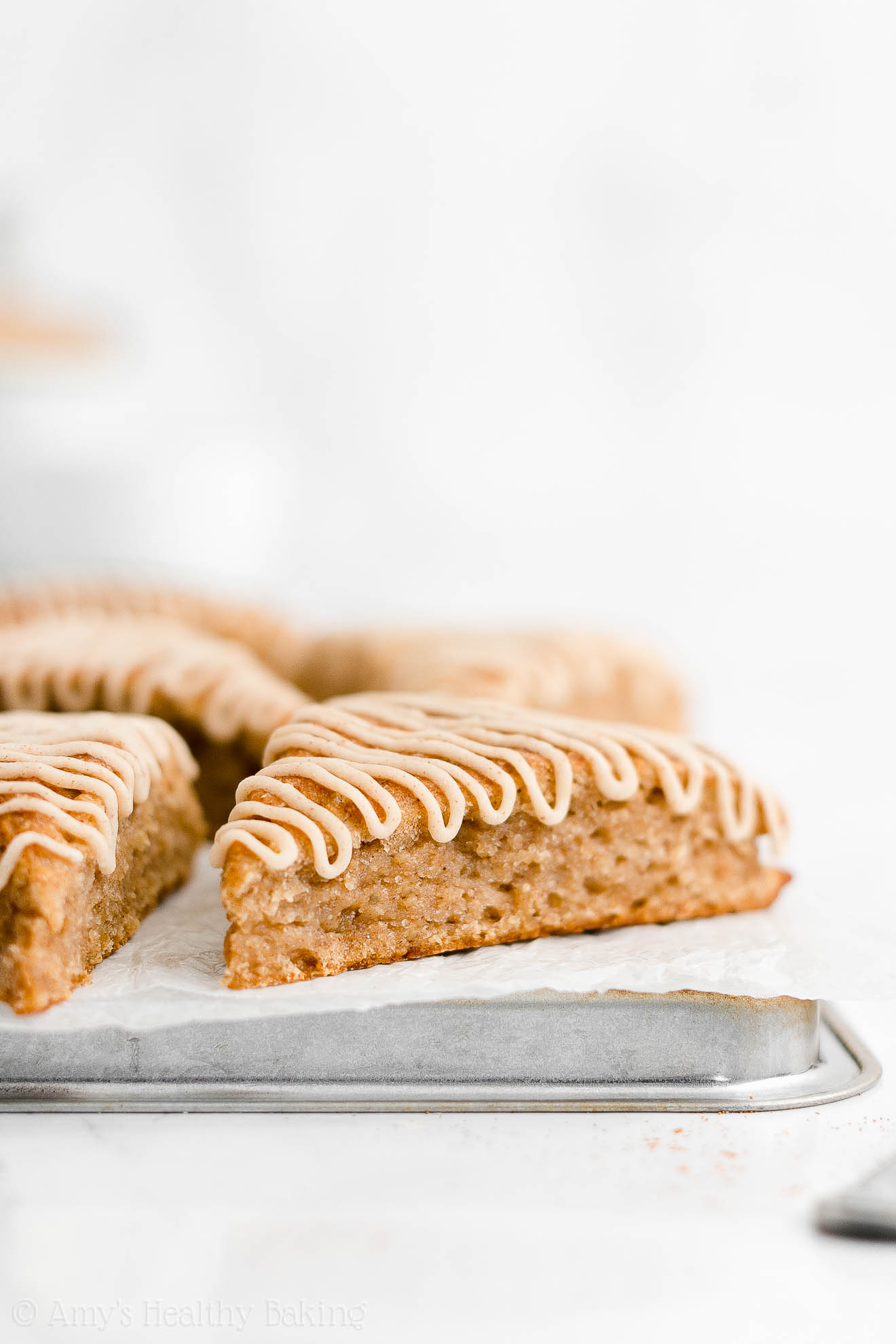 Now all that’s left is to decide… Do you just eat one? Or reach for a second?? 😉 And when you make your own, remember to snap a picture and share it on Instagram using #amyshealthybaking and tagging @amyshealthybaking IN the photo itself! (That guarantees I’ll see your picture! 🙂 ) I’d love to see your healthy cinnamon scones! 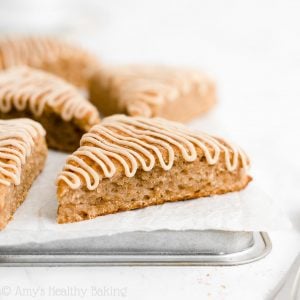 © Amy's Healthy Baking
Yields: 8 scones
These healthy pastries are surprisingly simple to make, and they’re perfect for lazy weekend brunches or even quick weekday breakfasts! These scones are really moist with plenty of cozy spice flavor, and the sweet glaze makes them taste even more irresistible. Leftover scones will keep for at least 5 days, if not longer, if stored in an airtight container in the refrigerator, and the undrizzled scones also freeze and reheat really well!
5 from 2 votes
Print Recipe Pin Recipe

For the gluten-free flour, I recommend the following: 1 cup (120g) millet flour, ¼ cup (30g) tapioca flour, ¼ cup (30g) brown rice flour, and 1 teaspoon xanthan gum. Most store-bought gluten-free flour blends (like this one!) will work as well, if they’re measured like this.   Whole wheat pastry flour, regular whole wheat flour, or all-purpose flour may be substituted for the white whole wheat flour.   Remember to measure the flour correctly, using this method or a kitchen scale. (← That’s the one I own and love!) Too much will dry out your scones and make the dough crumbly.   The type of cinnamon that you use makes a difference! I buy my favorite cinnamon online here (it’s super affordable!), and I love how it tastes richer, stronger, warmer, and sweeter than “regular” cinnamon. If you aren’t using this type of cinnamon, then you may want to increase the cinnamon by an additional ¼ teaspoon.   It’s very important that your butter is cold, straight from the fridge. (Freezing it isn’t necessary for this recipe!) With very cold butter, it won’t heat up until you put the scones in the extremely hot oven, and it will create little air pockets and a very tender crumb when it melts.   Honey or agave may be substituted for the maple syrup.   As written, these scones aren’t overly sweet. If you prefer sweeter scones, substitute an additional 1-2 tablespoons of pure maple syrup for an equal amount of milk.   Any milk may be substituted for the nonfat milk.   In a pinch, coconut oil may be substituted for the butter, but the texture of the scones will be affected. Very cold butter is required to achieve their tender texture, and since coconut oil melts at a much lower temperature, the results will not be the same. Instead, I recommend the vegan version below. (See my blog post above for more information!)   VEGAN + DAIRY-FREE VERSION: I recommend Earth Balance sticks in place of the butter, your preferred non-dairy yogurt in place of the Greek yogurt, and non-dairy milk in place of the nonfat milk.   OPTIONAL DRIZZLE: Stir together 2 tablespoons (30g) confectioners’ style erythritol, ⅛ teaspoon ground cinnamon, and 2 ½ – 3 ½ teaspoons of milk (any kind!) in a small bowl. Transfer the mixture to a zip-topped bag, cut off a tiny piece of one corner, and drizzle on top of the cooled scones.   For this drizzle, I buy my confectioners’ style erythritol online here. In a pinch, regular confectioners’ (powdered) sugar may be substituted. However, regular powdered sugar is more absorbent, so start with ½ teaspoon of milk and add more as necessary to achieve the desired consistency.   If you’d like to fully coat your scones with the drizzle instead, you definitely can! Just make 2-3 times the amount of drizzle, and dip the tops of your scones directly into the bowl instead of transferring the glaze to a plastic bag and snipping off the corner.   When refrigerating leftover scones that have already been drizzled, the drizzle will turn brittle and crack if made with erythritol, or it will dissolve into the scones if made with powdered sugar. Neither will affect the flavor — only the appearance!   {gluten-free, egg-free, clean eating, low fat, dairy-free option, vegan option}
DID YOU MAKE THIS RECIPE?I'd love to hear what you think of it in a comment below! If you take a picture, tag @amyshealthybaking on Instagram or use the hashtag #amyshealthybaking.

The Healthier Chocolate Treats cookbook is perfect for any and all chocolate lovers. Whether you enjoy chocolate occasionally or every single day (that’d be me!), there are plenty of goodies inside for you! Healthier Chocolate Treats contains 50+ brand new healthier recipes. These recipes have never been seen before or appeared on my blog. You won’t find them anywhere else! And yes—every single one contains some form of chocolate. Whether you prefer milk, dark or white, there are lots of treats inside for you!     What Inspired You to Write Healthier Chocolate Treats? I have always loved chocolate. Every Halloween throughout my childhood, I inverted the entire contents of my bright orange jack-o-lantern bucket … END_OF_DOCUMENT_TOKEN_TO_BE_REPLACED