An easy, one-bowl recipe for tender scones full of cozy cinnamon and sweet raisins. Ready in just 30 minutes & made with no refined flour or sugar!
Click here to PIN the recipe and save it for later! 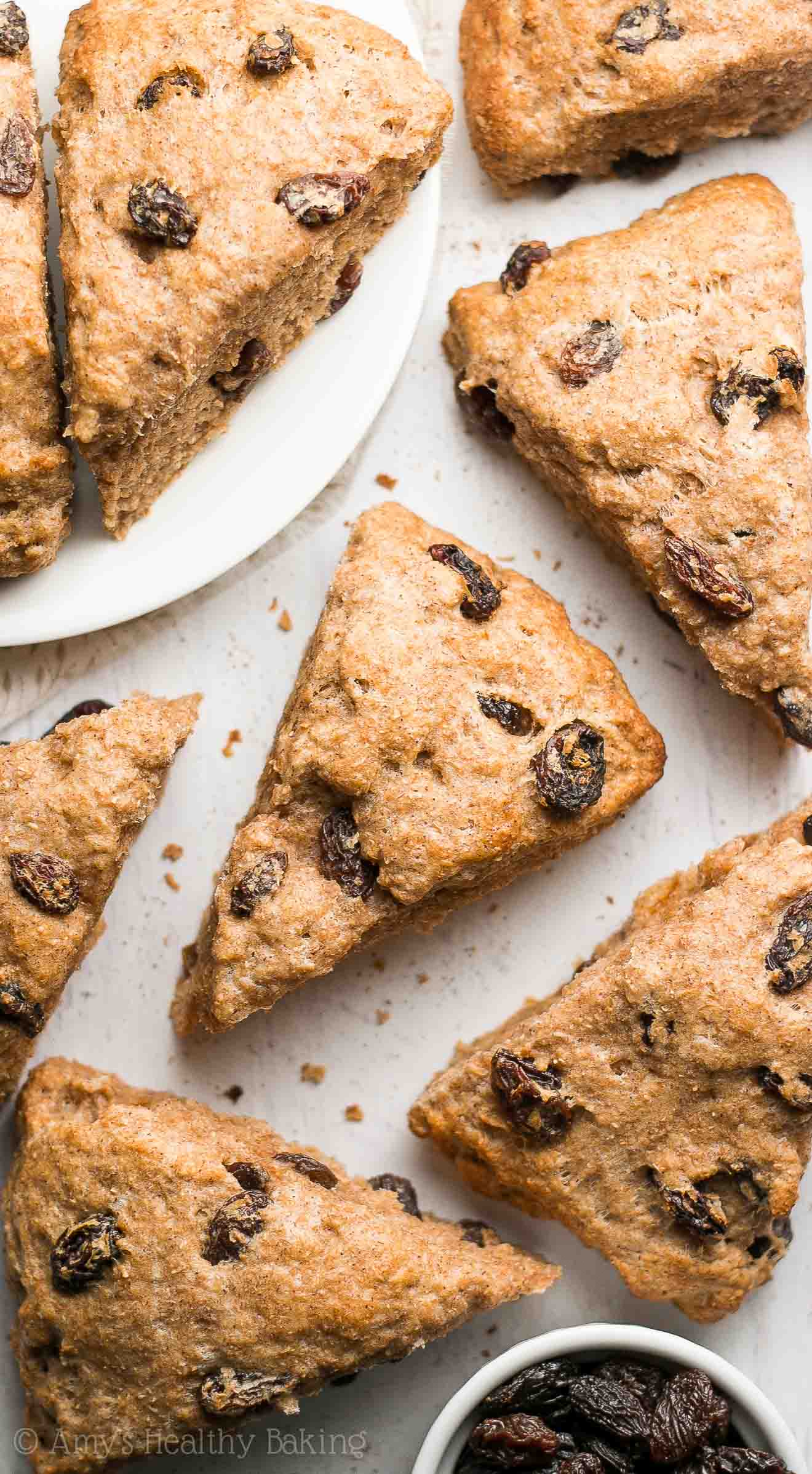 A few years ago, Dad and I flew to the East Coast to check off three Major League Baseball stadiums from our list. We started in Philadelphia for a Saturday evening Phillies game, followed by the Baltimore Orioles Sunday afternoon, and finishing with the Nationals in Washington, D.C. on Tuesday night.

During our trips, we always plan some fun sightseeing in between the baseball games—and lots of local food, of course! We walked to the Liberty Bell in Philadelphia, right after eating my first-ever authentic Philly cheesesteak, and we spent hours in DC wandering around the National Air and Space Museum, the White House, and the Lincoln Memorial. 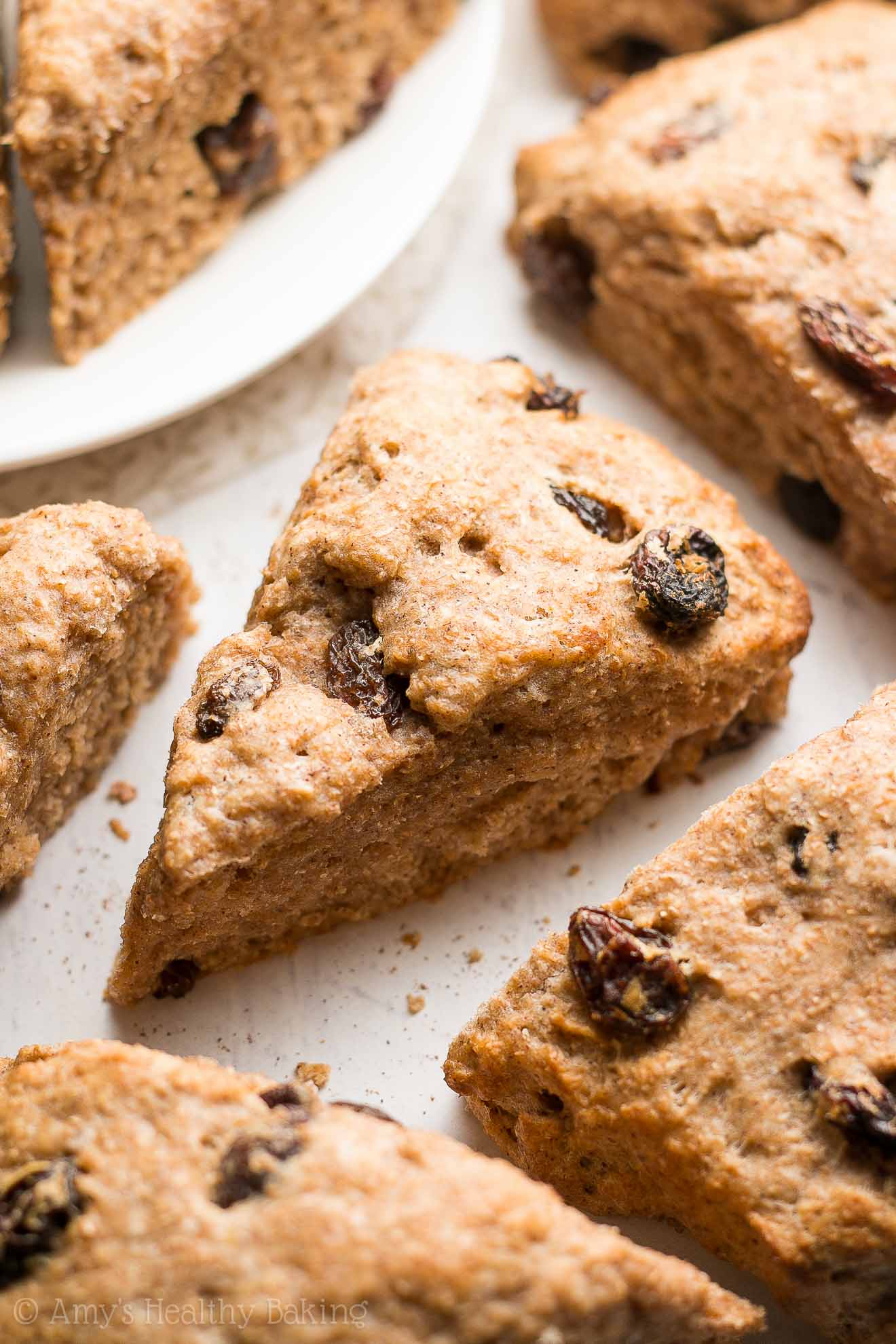 But in cramming so many activities into such a short period of time, we often traveled at odd hours of the day… Like after the extra-innings Phillies’ game that ended well after midnight, our alarms rang at 6 am the next morning so we could drive to Baltimore and arrive at the stadium before the gates opened at 11 am!

Before we drove out of the city, its streets completely deserted at that early hour, we stopped by the Starbucks in our hotel’s lobby. Dad ordered a pastry to go along with his coffee, and although highly tempted to do the same, especially after staring bleary-eyed at the glass display case full of muffins and coffee cakes and scones, I opted for a simple fruit salad to go with my grande latte. (Always a necessity after 5 hours of sleep!) 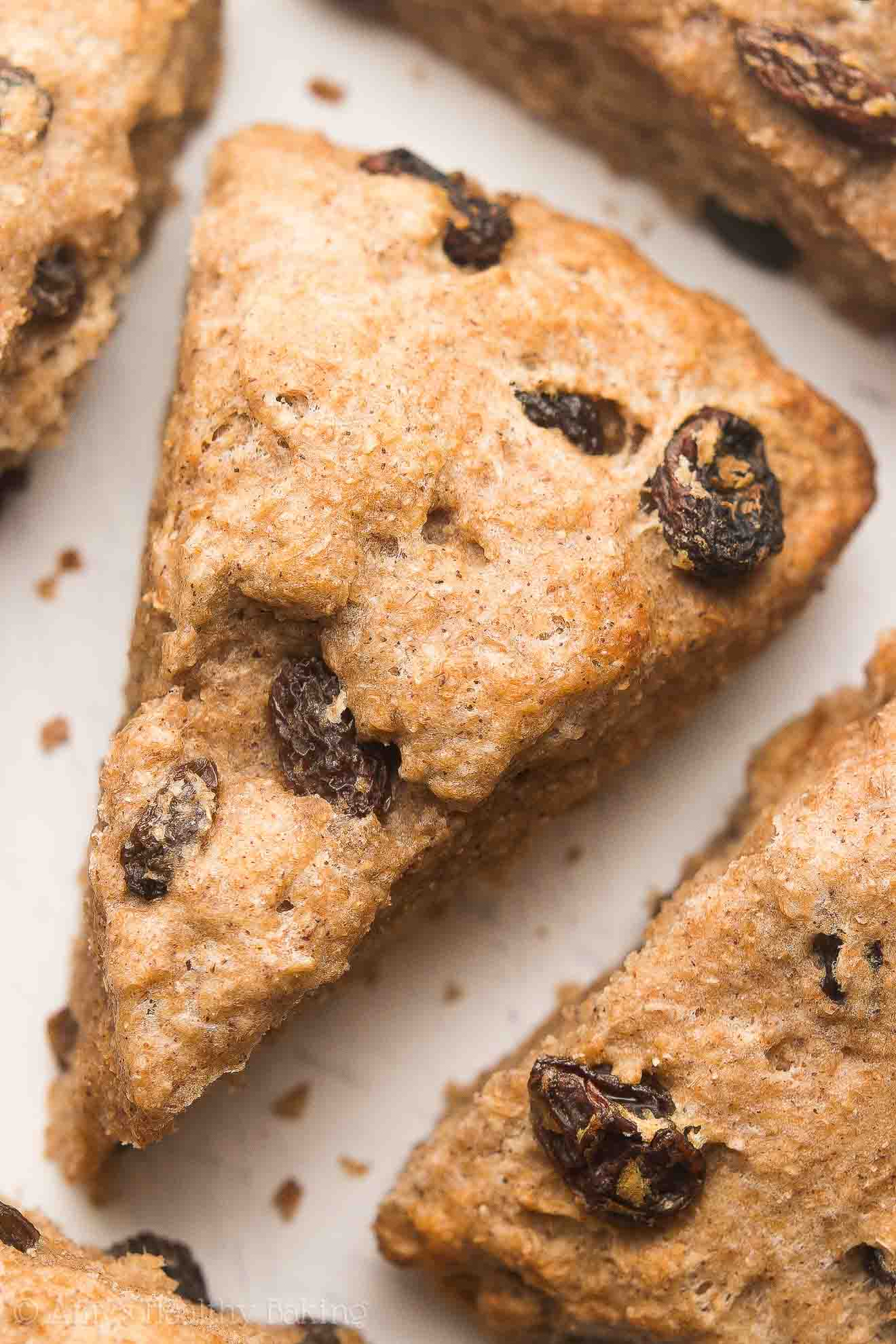 Since we just scheduled this year’s baseball trips, I started thinking about our previous ones… Including Philly and those oh-so-tempting breakfast pastries! Yet instead of dashing out to Starbucks for something to pair with my {decaf} coffee while listening to Spring Training games, I baked these homemade Healthy Cinnamon Raisin Scones! They’re supremely tender, ready in just 30 minutes, and contain no refined flour or sugar! 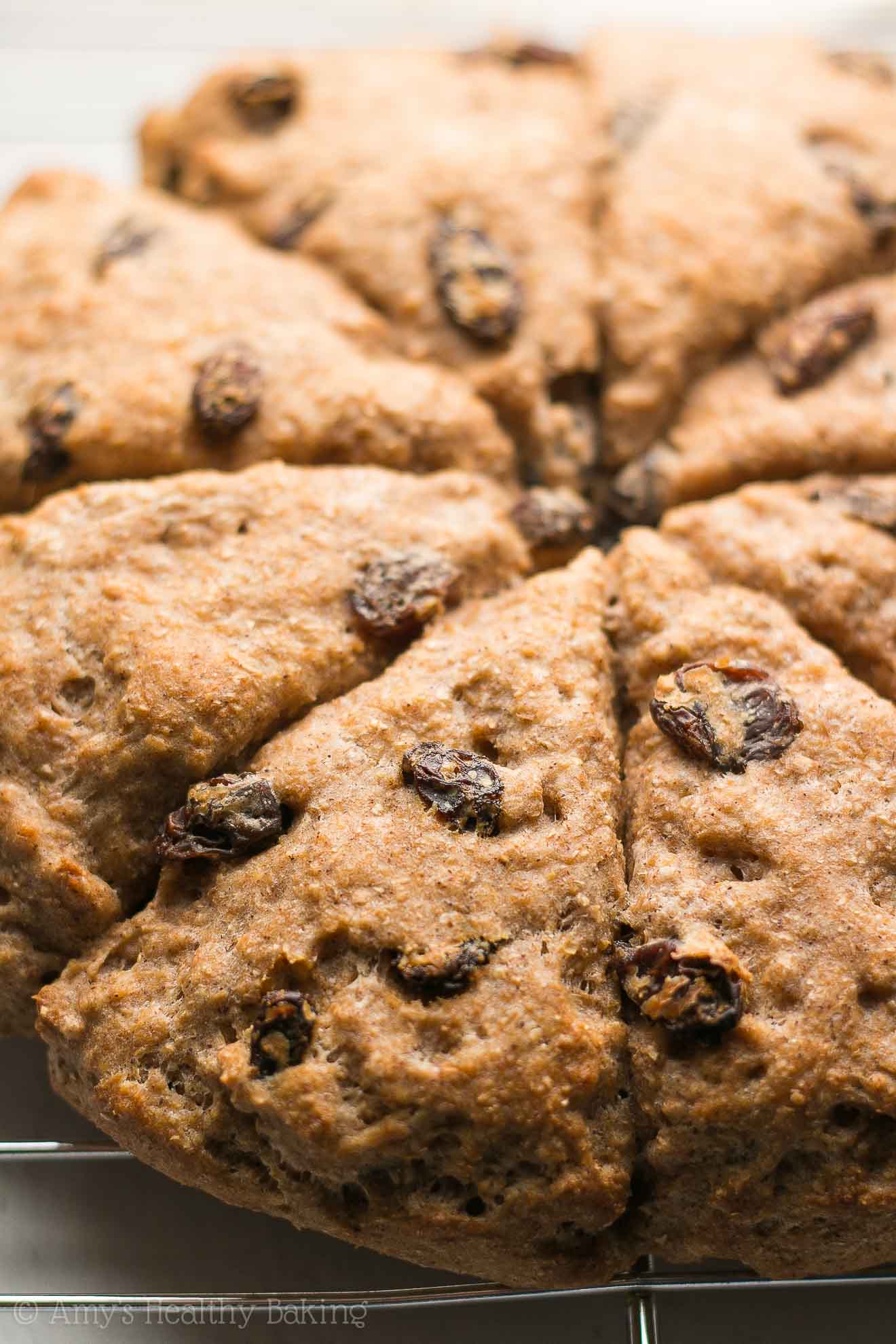 To start, you’ll need whole wheat flour and a generous dose of cinnamon. You probably know how big of a chocoholic I am (that’s why I published my Healthier Chocolate Treats cookbook!), but… I actually love cinnamon just as much as chocolate! This variety is my current favorite because it has a much stronger and more robust flavor compared to the red-lidded jars of cinnamon I grew up with.

Next, you’ll cut in a small amount of very cold butter. Just a little bit! The rest of these scones’ tender texture comes from Greek yogurt, one of my favorite ingredients in healthier baking. It adds the same moisture as extra butter for a fraction of the calories, and it gives your scones a protein boost, too!

However, it’s very important that your butter is cold, straight from the fridge. (Freezing it isn’t necessary for this recipe!) With very cold butter, it won’t heat up until you put the scones in the extremely hot oven, and it will create little air pockets and a very tender crumb when it melts.

Note: This is why I recommend against using coconut oil, if at all possible, because coconut oil has a much lower melting point than butter and will quickly turn to liquid once you begin mixing it into the dough. 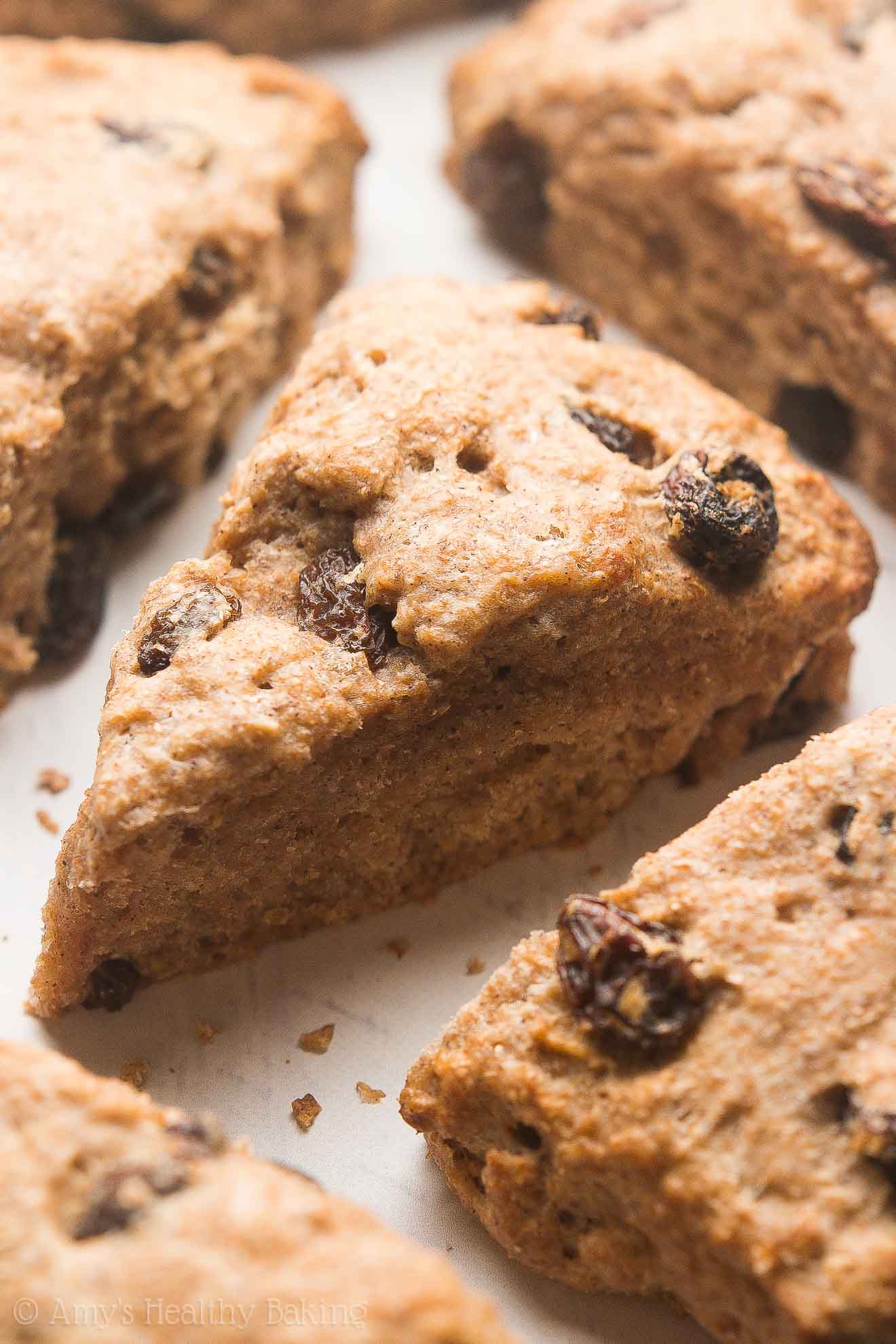 To sweeten your scones, you’ll use pure maple syrup. Be sure you buy the real kind! Skip the pancake syrups and sugar-free syrups because those contain corn syrup or artificial ingredients, which we’re avoiding in this healthier recipe. The only ingredient on the label should be “maple syrup,” and it’s generally sold in thin glass bottles or squat plastic jugs. (I’ve also bought it online here for a discounted price!)

Just before popping the pan in your oven, you’ll brush the tops and sides of the dough with a little milk. This helps seal moisture into the dough, and it also creates a lightly crisp crust on the outside. It’s such an irresistible combination of textures—and flavors, with the cinnamon and raisins! 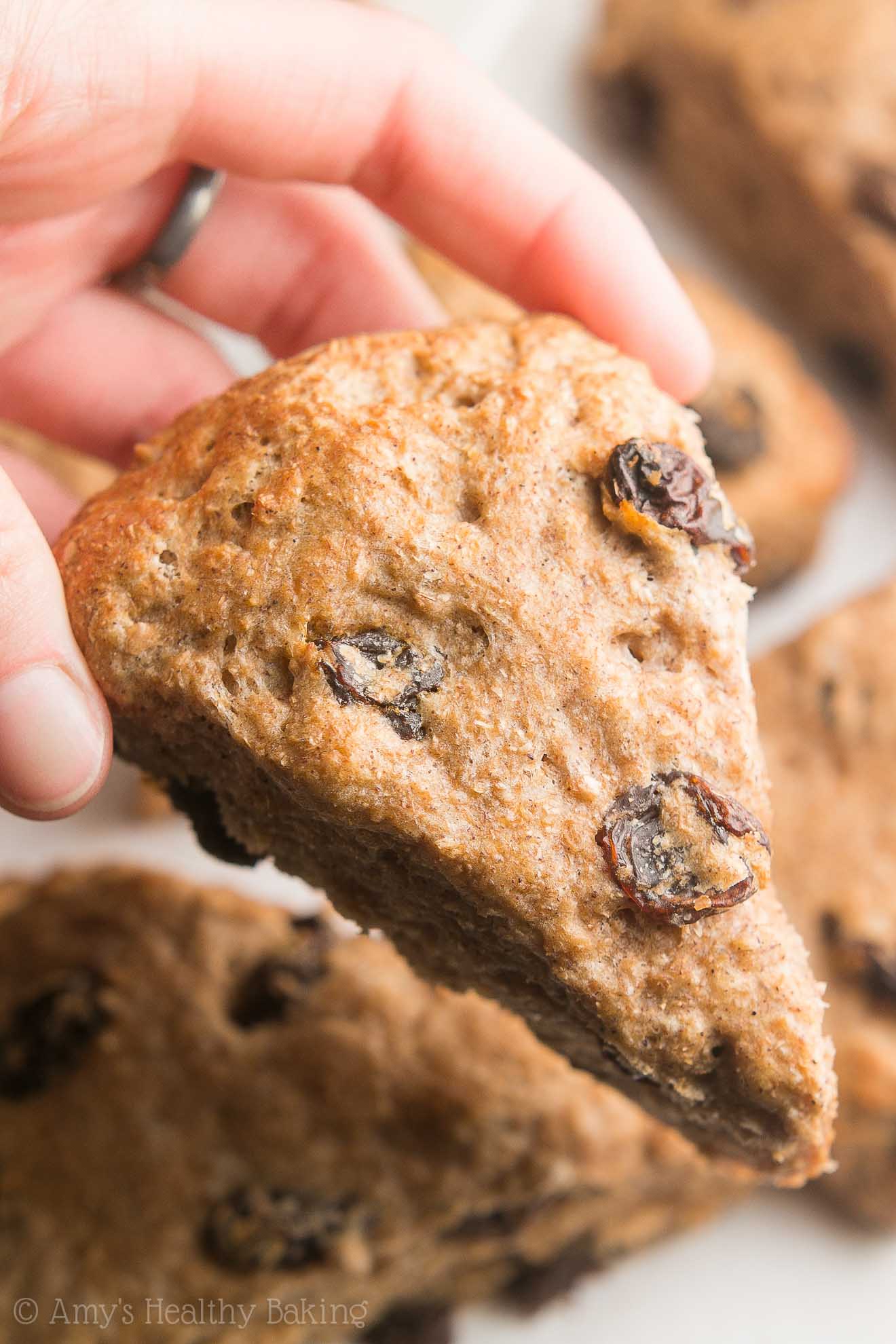 Ready for breakfast? And when you make your own, remember to snap a picture and share it on Instagram using #amyshealthybaking and tagging @amyshealthybaking IN the photo itself! (That guarantees I’ll see your picture! ?) I’d love to see your scones and feature them in my Sunday Spotlight series!

Click here to PIN the recipe and save it for later!
Yields: 8 scones
These tender scones are really easy to make, and their flavor reminds me of oatmeal raisin cookies! They’ll keep for at least a week if stored in an airtight container in the refrigerator.
Notes: White whole wheat flour, whole wheat pastry flour, or all-purpose flour may be substituted for the white whole wheat flour.

This cinnamon variety is my current favorite because it has a much stronger and more robust flavor compared to the red-lidded jars of cinnamon I grew up with.

It’s very important that your butter is cold, straight from the fridge. (Freezing it isn’t necessary for this recipe!) With very cold butter, it won’t heat up until you put the scones in the extremely hot oven, and it will create little air pockets and a very tender crumb when it melts.

Honey or agave may be substituted in place of the pure maple syrup.

In a pinch, coconut oil may be substituted for the butter, but the texture of the scones will be affected. Very cold butter is required to achieve their tender texture, and since coconut oil melts at a much lower temperature, the results will not be the same.

The Healthier Chocolate Treats cookbook is perfect for any and all chocolate lovers. Whether you enjoy chocolate occasionally or every single day (that’d be me!), there are plenty of goodies inside for you! Healthier Chocolate Treats contains 50+ brand new healthier recipes. These recipes have never been seen before or appeared on my blog. You won’t find them anywhere else! And yes—every single one contains some form of chocolate. Whether you prefer milk, dark or white, there are lots of treats inside for you!     What Inspired You to Write Healthier Chocolate Treats? I have always loved chocolate. Every Halloween throughout my childhood, I inverted the entire contents of my bright … END_OF_DOCUMENT_TOKEN_TO_BE_REPLACED