A much healthier recipe for pull-apart bread with a sweet cinnamon-spiced caramely coating. Secretly guilt-free & only 120 calories! 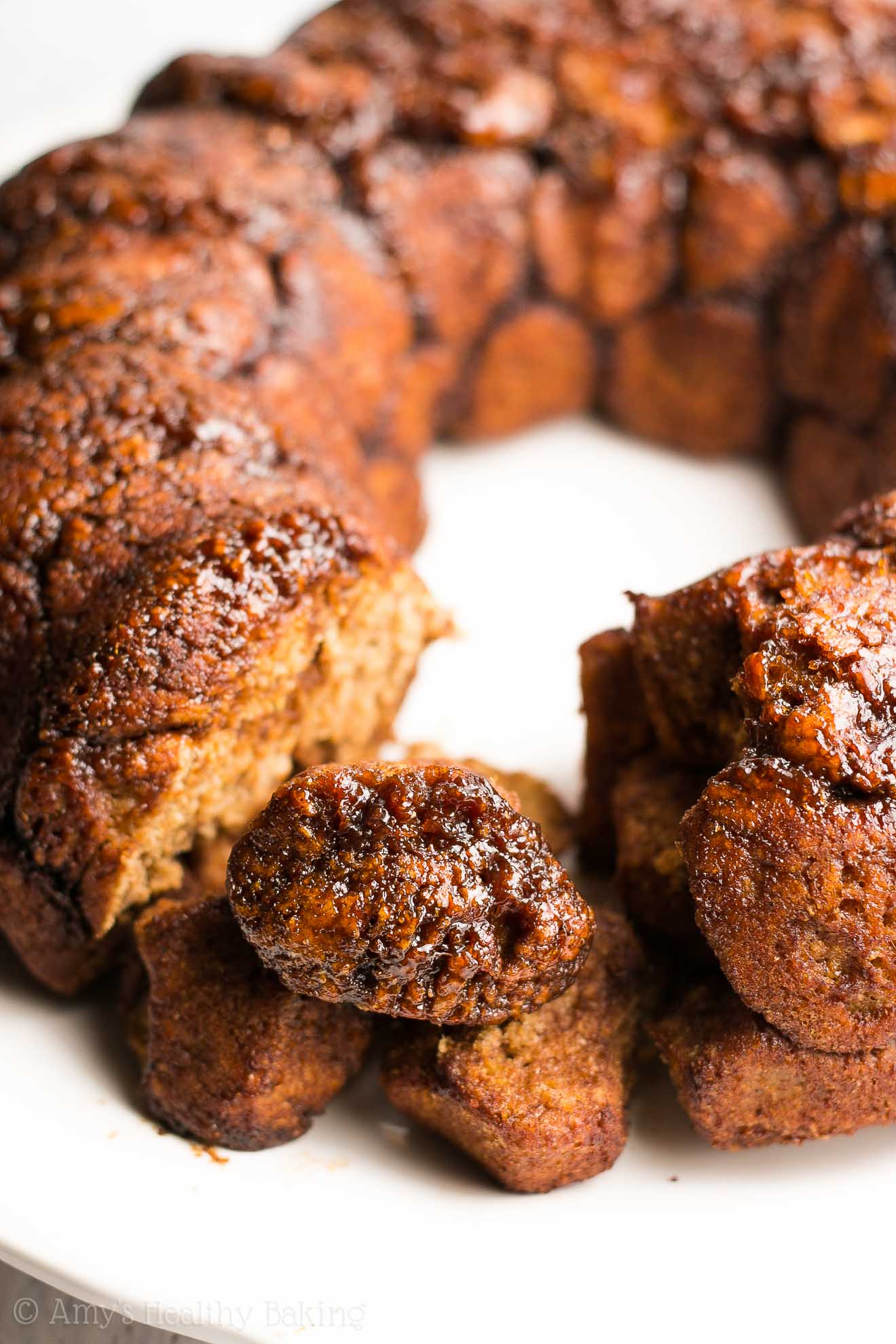 On Christmas mornings throughout my childhood, after about half of the presents had disappeared from underneath the tree, their festive reindeer- and Santa-adorned wrapping paper carelessly strewn about the floor instead of wadded up and tucked inside of the designated garbage bag, and an almost equal number of chocolate wrappers from our stockings tossed aside on end tables, Mom proclaimed that we should take a short break.

While she grabbed the phone and dialed her sister, followed by our grandparents, in other cities to wish them a Merry Christmas (and then handed over the receiver to my brother and me to thank each family for our new gifts), another adult headed into the kitchen to whip up a coffee cake for us to enjoy after unwrapping the second half of the presents. 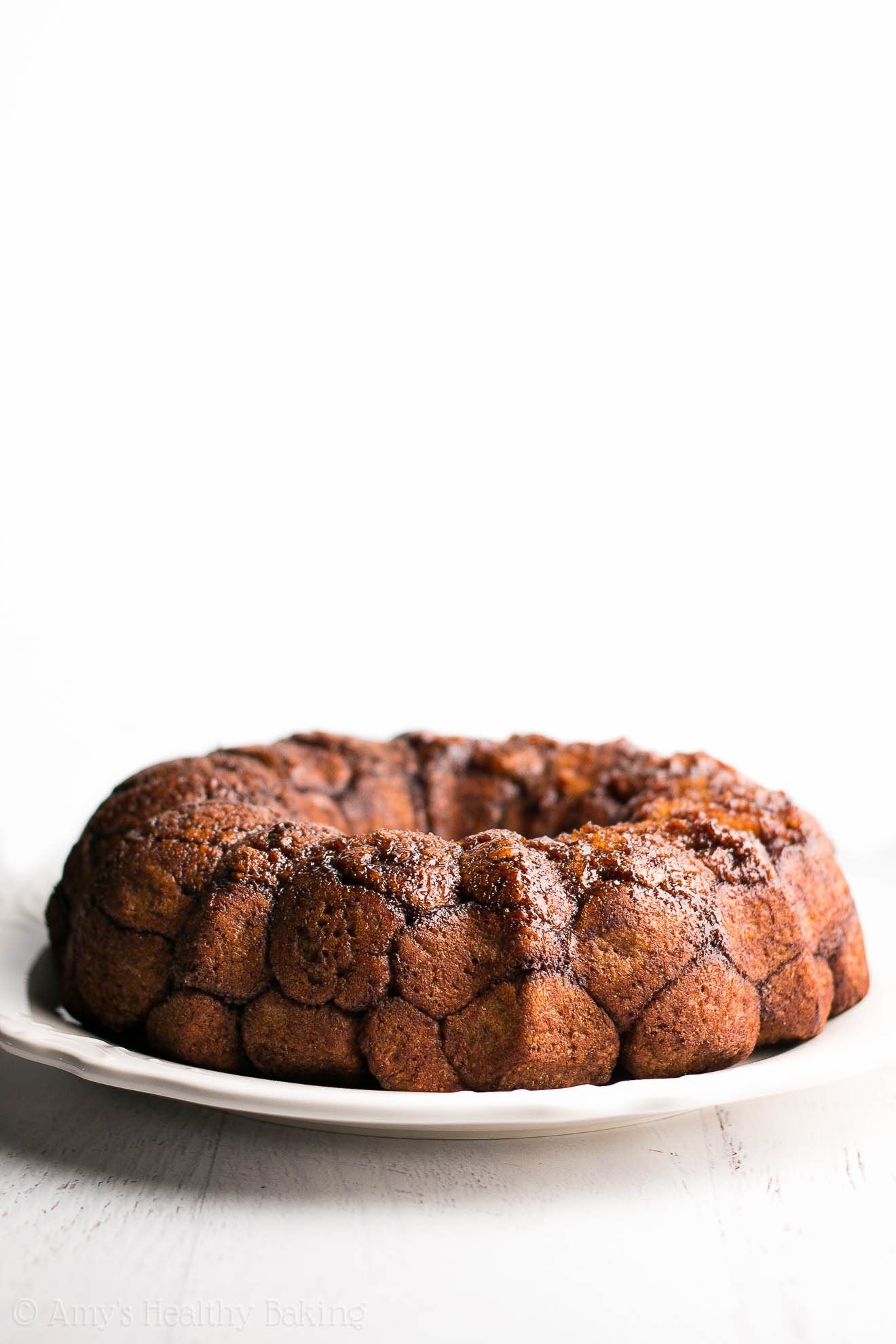 Typically, Grandpa did the honors and baked his famous Cowboy Coffee Cake, studded with rainbow-colored flecks of our favorite cereal (that was his secret ingredient!). With a thick layer of cinnamon streusel on top, we looked forward to big sky-high slices of that special treat almost as much as K’NEX roller coasters and Harry Potter LEGO sets!

But every once in a while, we convinced Grandma to bake her raspberry coffee cake instead. Whereas Grandpa’s looked like a traditional cake and was baked in a square pan, Grandma’s recipe called for rolling the dough into a large rectangle on a cookie sheet, slicing each of the long sides into skinny strips, and braiding them across the raspberry jam filling she carefully painted down the center. It took much more time and effort to make, but that buttery pastry was worth every minute of waiting! 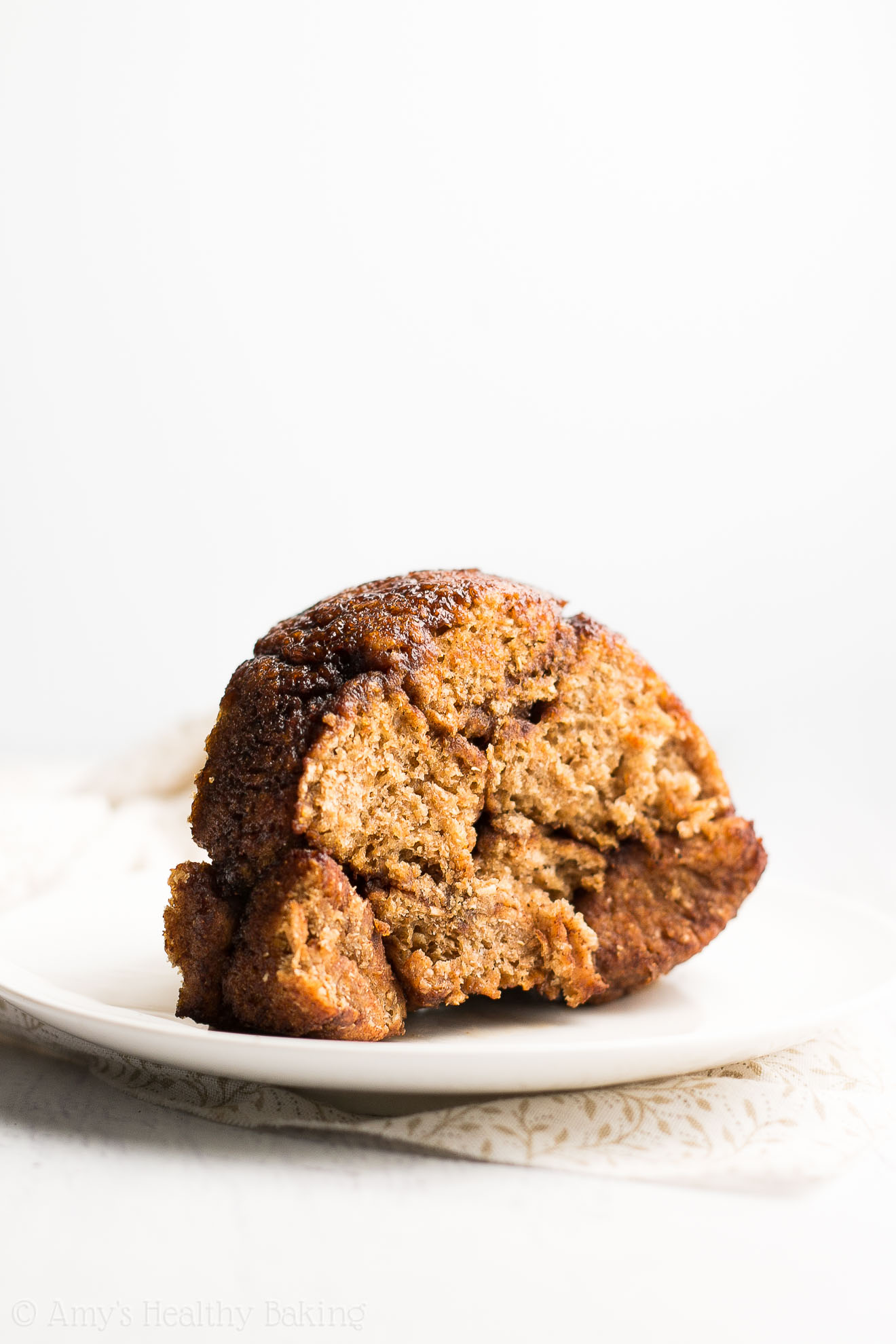 Even when my grandparents stopped baking, we still enjoyed coffee cake on Christmas morning, courtesy of our favorite local brunch restaurant. They sold big sheet-cake-sized pans of their famous blueberry coffee cake, an extremely tender sour cream cake bursting with juicy berries and finished with a thick layer of cinnamon streusel (just like Grandpa’s!), which we picked up the day before on Christmas Eve.

So until a few years ago, I never realized that monkey bread was a traditional Christmas breakfast for many families. In fact, I didn’t even know what monkey bread was! I originally envisioned some sort of banana bread (monkeys… bananas… it makes sense, right??), but when I searched the internet, I nearly gasped. All of that butter and sugar… It looked absolutely irresistible—and so decadent! 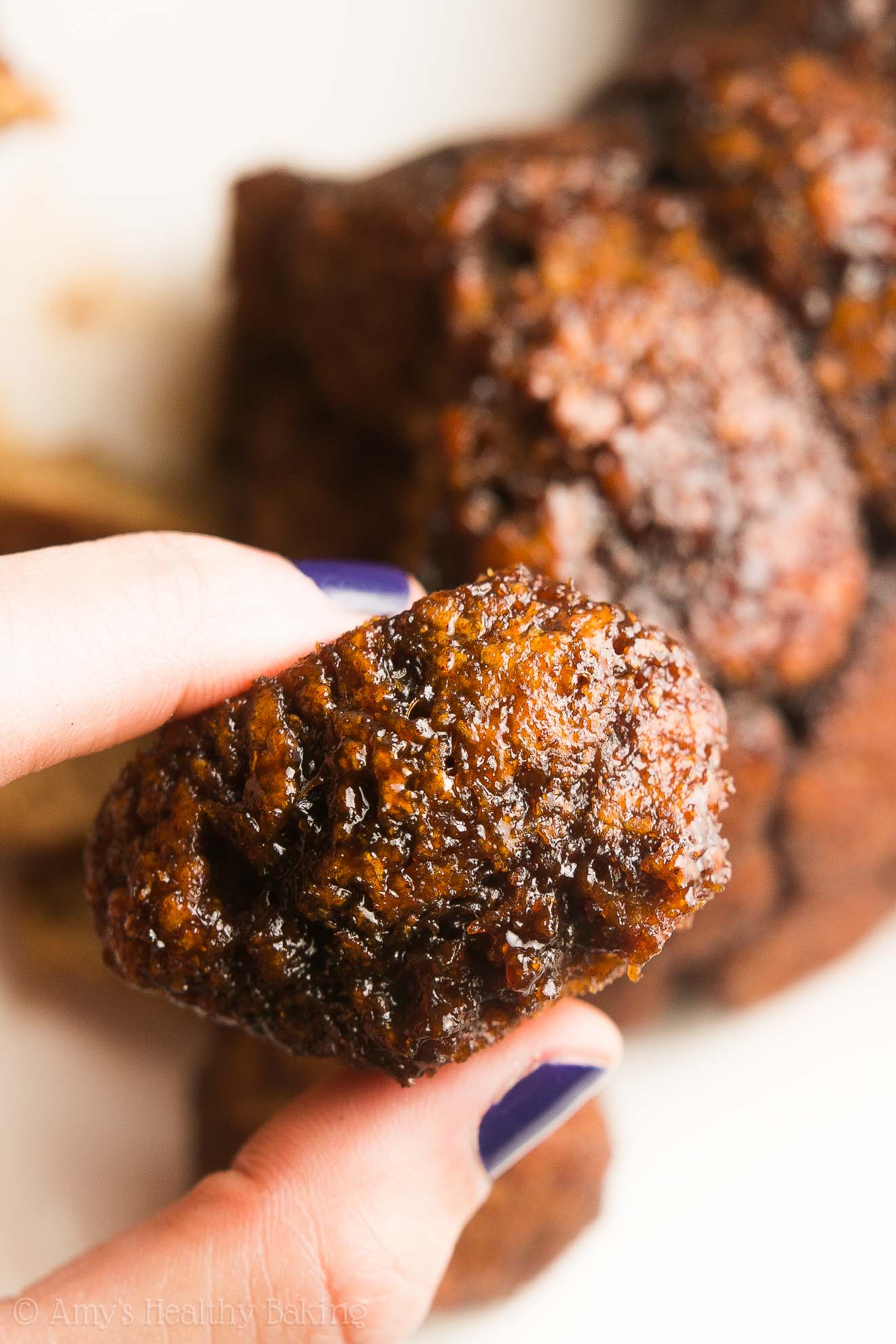 Yet after lots of testing and tweaking, I finally perfected this recipe: The Ultimate Healthy Monkey Bread! With merely a fraction of the calories and absolutely no refined flour or sugar, it’s a treat that comes with the same irresistible flavors but none of the guilt!

And when my dad took most of one batch to work one day, he reported that it disappeared in minutes.… And that everyone gave it not just one, not just two, but three thumbs up! 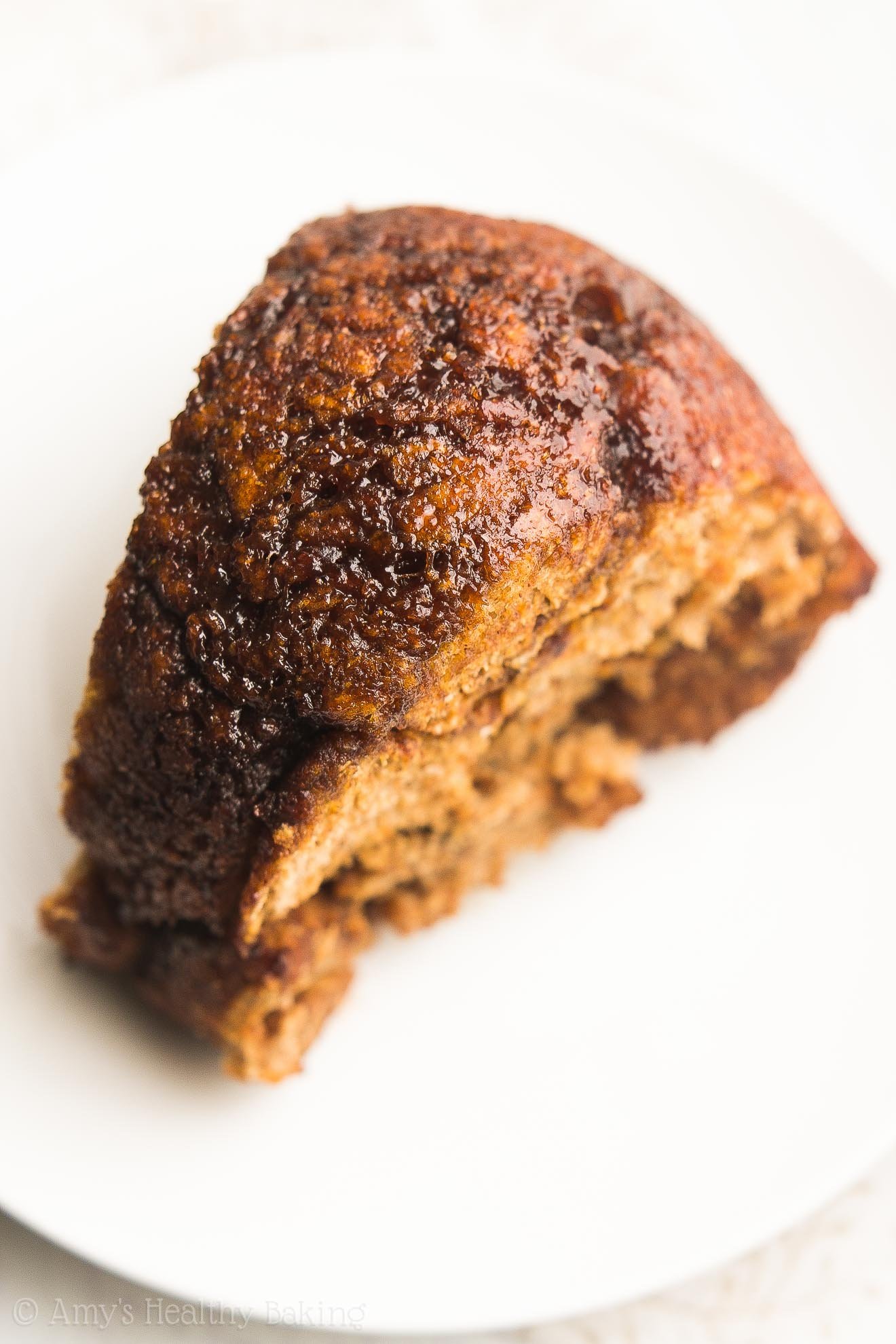 Just in case you’re unfamiliar with monkey bread, let’s briefly go over what it is before diving into the recipe! Traditional recipes consist of small balls of dough (often store-bought canned biscuit dough, as a shortcut!) coated in cinnamon sugar and layered in a bundt cake pan, then drizzled with a mixture consisting of a lots of melted butter and more sugar. After baking and inverting the pan onto a platter, that mixture of melted butter and sugar turns caramel-like, and the dough balls easily pull apart.

As for how it earned its name… Nobody seems to agree! The most likely explanation is that the pieces of monkey bread are meant to be pulled apart and eaten with your fingers, just like monkeys eat with their fingers. If you know of the real answer, let me know in the comments section! ? 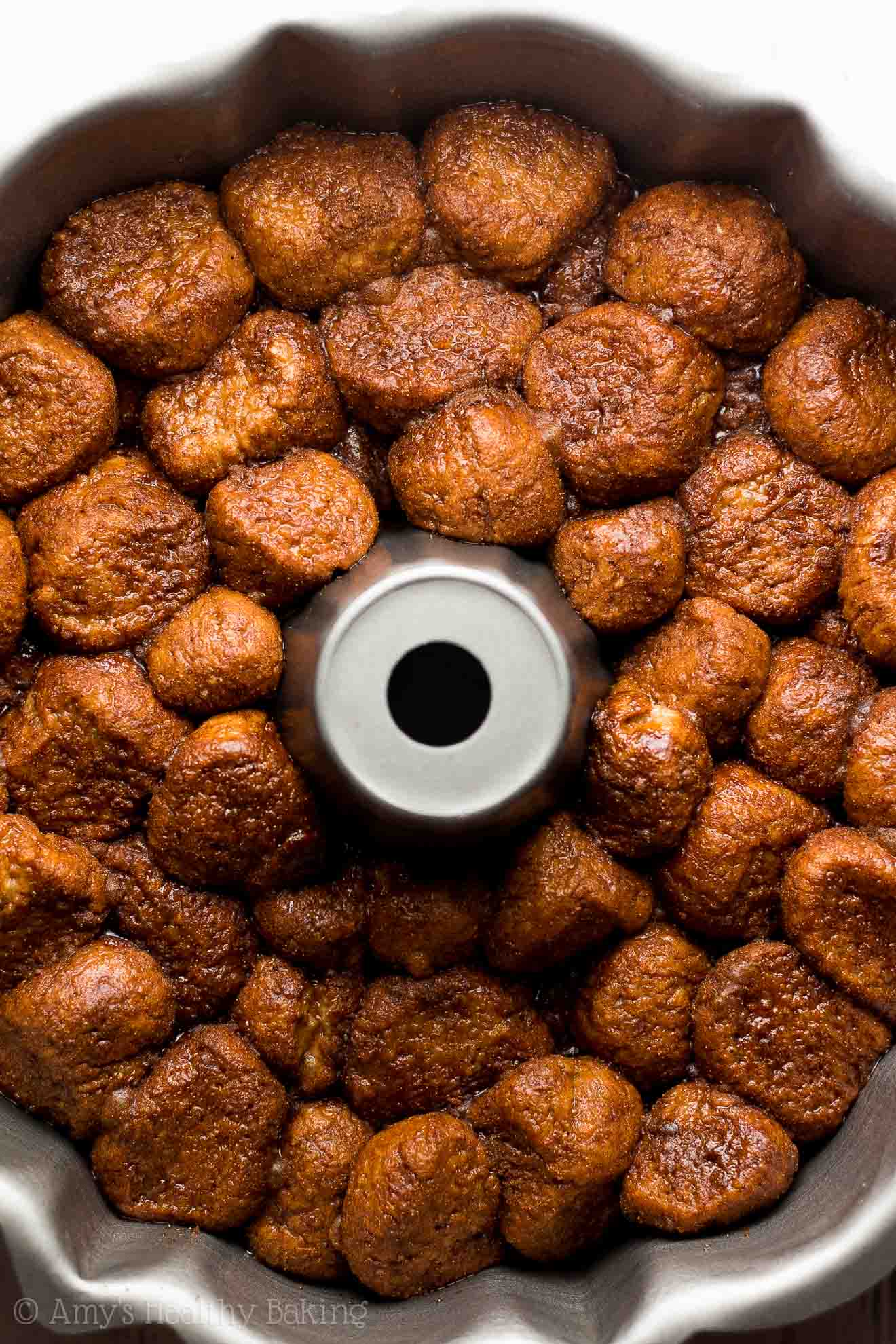 To make this healthy version, you’ll skip the store-bought canned biscuits and make your own dough. It’s a basic yeast-based whole wheat dough. Don’t be afraid of yeast! I started baking yeast breads as an eight-year-old, and if I could do it as a little girl, I know you can do it now. I have faith in you!

For the dough, you’ll need a handful of ingredients: whole wheat flour, yeast, warm milk, melted butter (just a tiny bit!), coconut sugar (instead of refined granulated sugar!), and salt. For the whole wheat flour, I highly recommend this brand. It performs the best in yeast-based recipes out of any type that I’ve tried! It rises taller and has a more tender texture, which makes it perfect for this monkey bread. 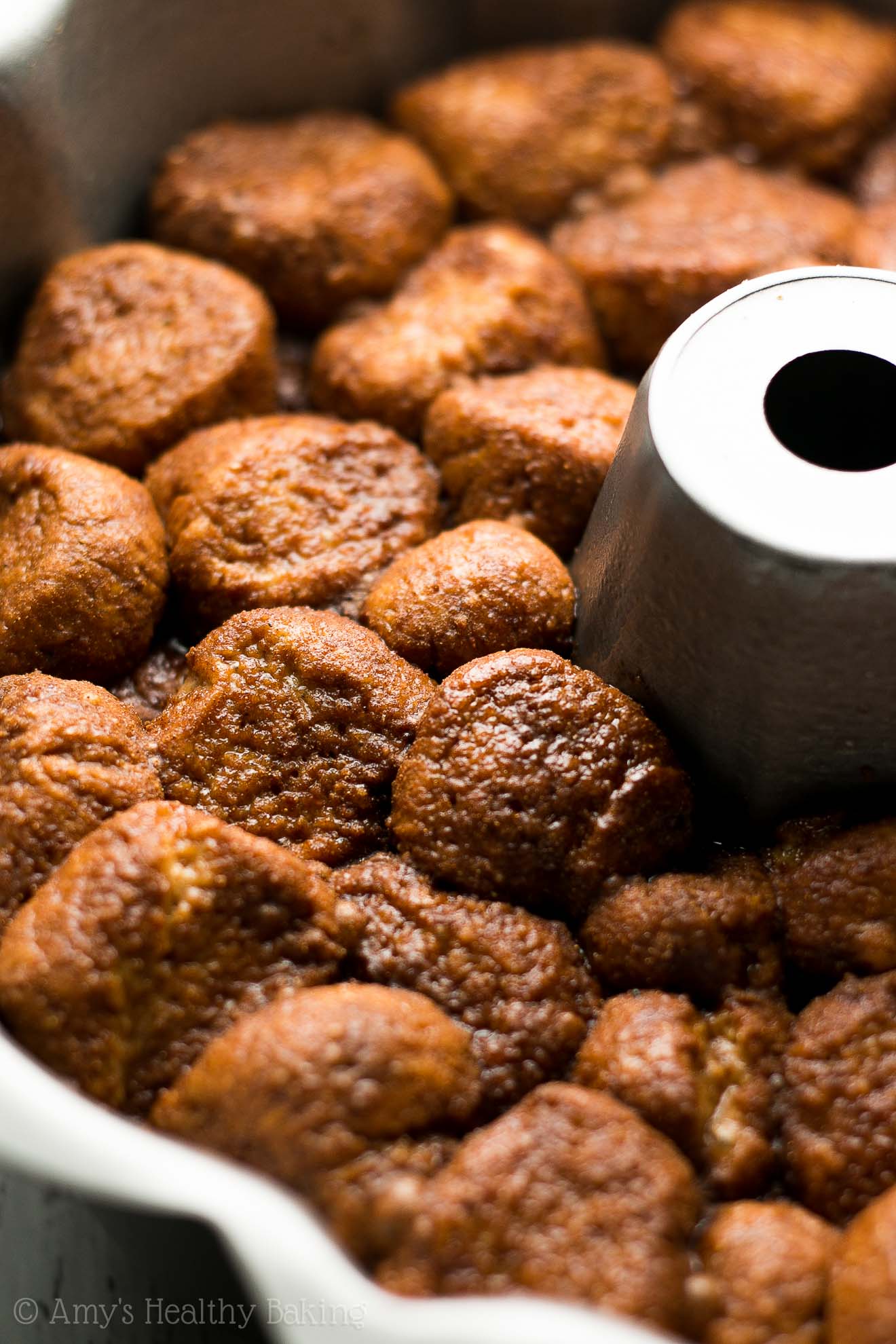 When it comes to yeast, I absolutely love Red Star Yeast! It’s the best yeast of any type I’ve tried, and it always ensures my bread, cinnamon rolls, and even this monkey bread turns out perfectly every time. I prefer their “Quick Rise” yeast, but their regular active dry yeast works just fine too. I can’t always find their yeasts at the grocery stores near my house, so I buy it online here.

Once you’ve made and kneaded the dough (I’ve found kneading by hand results in a more tender texture, and I also love how soothing that process can be!), you’ll divide it into 80+ little pieces. I recommend using a small serrated knife to do this! Cut the dough in half… Then half again… Then half again… Then half one more time… To get 16 segments! Roll each of those segments into a short rope, and cut each rope into 5 equal-sized pieces. That will yield exactly 80 small balls! 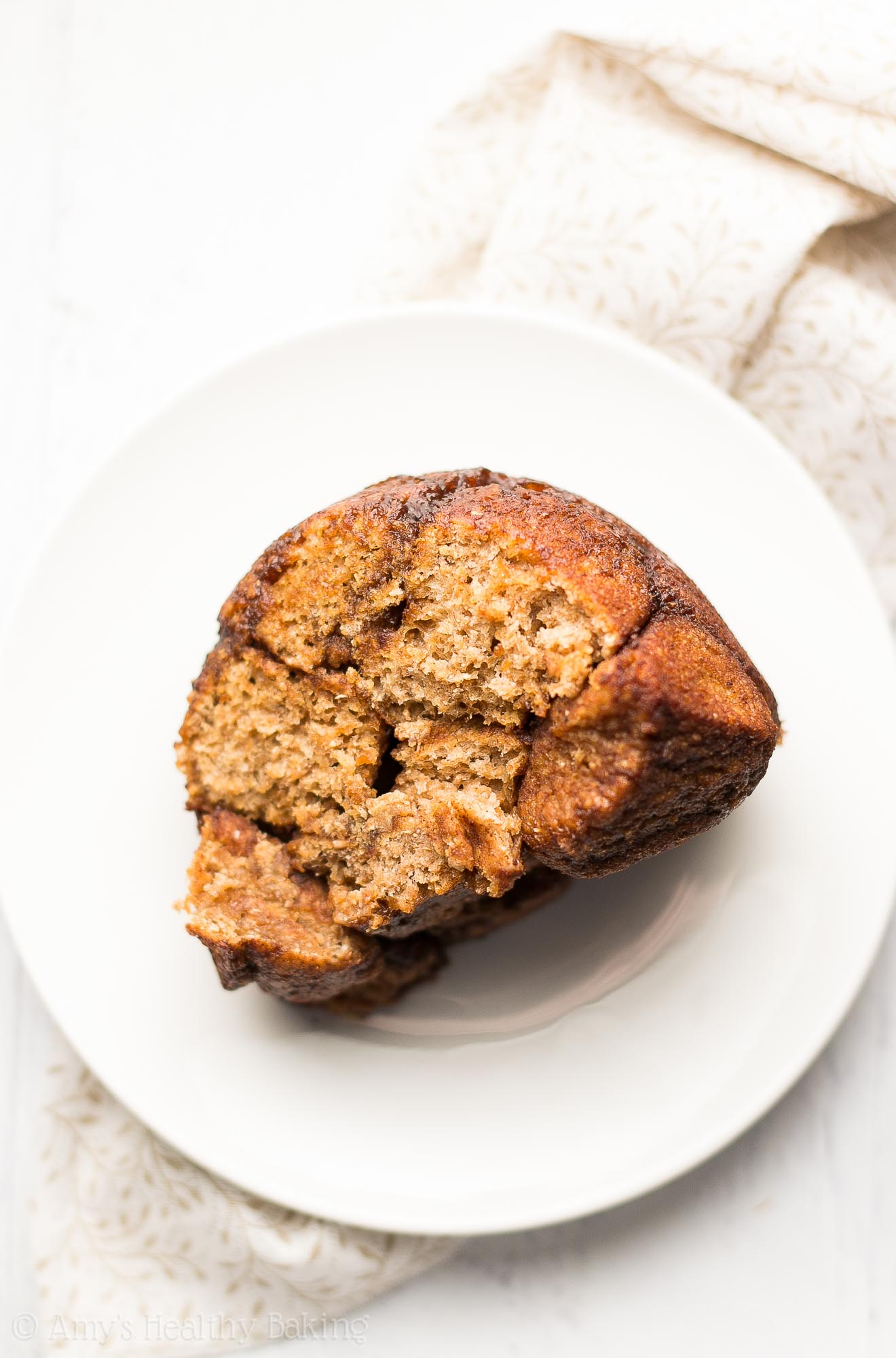 Before layering them in the pan, you’ll dip each dough ball into a mixture of warm milk and a tiny bit of melted butter. (This is how you’ll cut out lots of calories compared to the traditional recipes!) Let the excess drip off; then roll the ball into another mixture of cinnamon and coconut sugar. Set it in the bundt pan, and repeat with the remaining balls.

Tip: Use one hand for the milk and melted butter bowl and your other hand for the cinnamon and coconut sugar!

Now it’s time to let the dough rise until it fills at least ¾ of the bundt pan or looks about double in size. That should take around 30-45 minutes. Then pop the pan in the oven, set a timer, and just a few minutes after it rings… 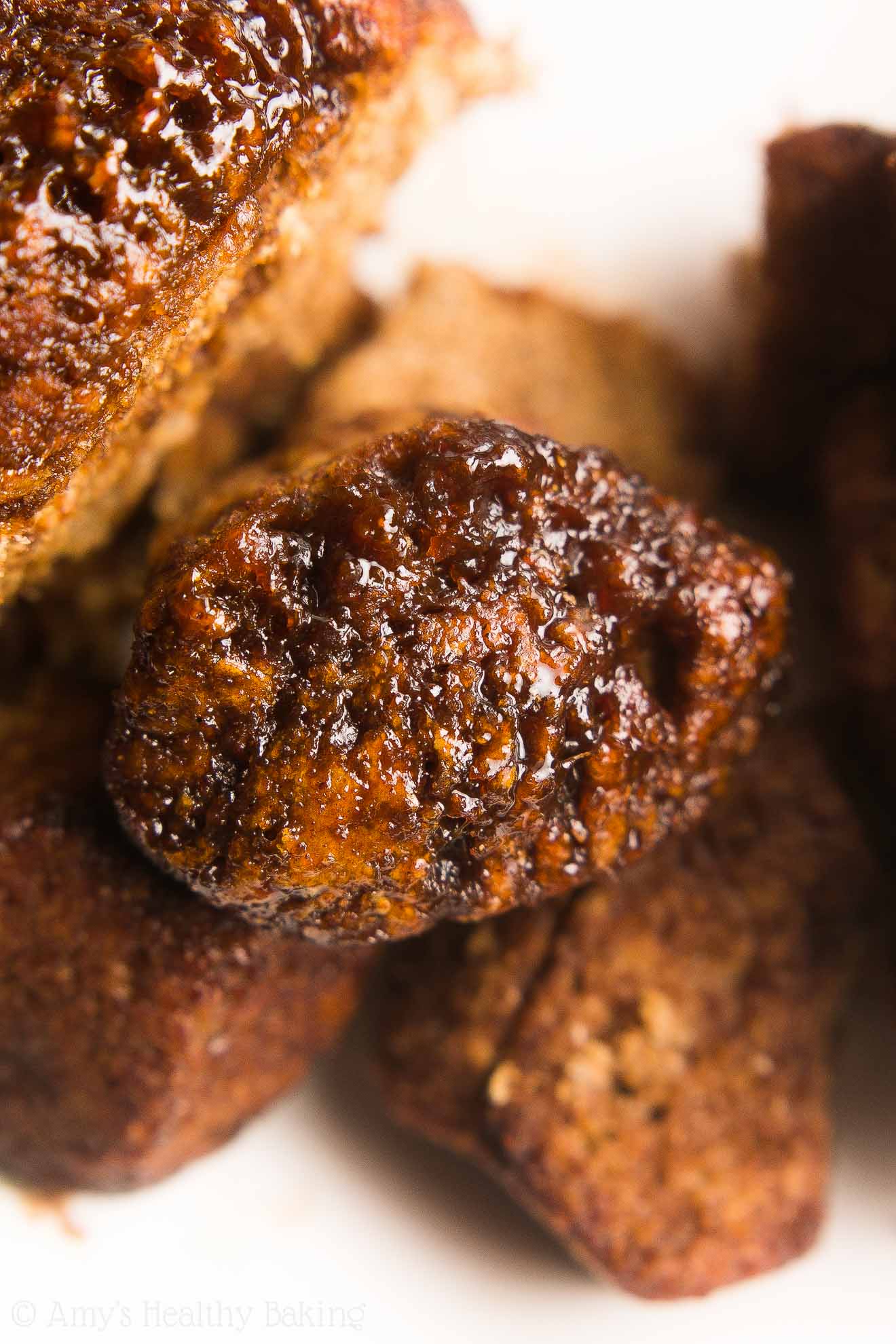 Invert the pan onto a plate and enjoy! Just look at that sweet gooey caramel… Doesn’t it look amazing?? ?? And when you make your own, remember to snap a picture and share it on Instagram using #amyshealthybaking and tagging @amyshealthybaking IN the photo itself! (That guarantees I’ll see your picture! ?) I’d love to see your monkey bread and feature it in my Sunday Spotlight series!

Click here to PIN the recipe and save it for later!
Yields: 20 servings
This recipe for pull-apart “monkey bread” is much healthier than traditional ones, but it tastes just as delicious! The cinnamon-spiced caramel-like coating is absolutely irresistible! Although it’s best if eaten the same day it’s made, leftovers will keep for at least three days at room temperature if lightly covered with plastic wrap—if they last that long!
Notes: For a vegan version, substitute your favorite non-dairy milk and Earth Balance buttery sticks (for the best flavor) or coconut oil in place of the butter.

Brown or granulated sugar may be substituted for the coconut sugar, but the monkey bread will no longer be clean-eating friendly. I do not recommend using any liquid sweeteners (i.e. honey, pure maple syrup, or agave) or stevia.

I highly recommend Red Star Yeast! Their yeast works the best out of any yeast I’ve tried, and I absolutely love their “Quick Rise” yeast. Active dry yeast, rapid or quick rise yeast, and bread machine yeast will all work.

I have not found a good gluten-free flour blend or gluten-free substitute that will work in this recipe.

When allowing the dough to rise, I prefer to start preheating the oven to its lowest temperature (typically around 150°F) for about 3-4 minutes. When the inside of the oven feels warm (similar to the temperature you’d feel if you stood underneath a heating vent!), turn off the oven, place the towel-topped pan into the center of the oven, and shut the oven door completely.

The Healthier Chocolate Treats cookbook is perfect for any and all chocolate lovers. Whether you enjoy chocolate occasionally or every single day (that’d be me!), there are plenty of goodies inside for you! Healthier Chocolate Treats contains 50+ brand new healthier recipes. These recipes have never been seen before or appeared on my blog. You won’t find them anywhere else! And yes—every single one contains some form of chocolate. Whether you prefer milk, dark or white, there are lots of treats inside for you!     What Inspired You to Write Healthier Chocolate Treats? I have always loved chocolate. Every Halloween throughout my childhood, I inverted the entire contents of my bright … END_OF_DOCUMENT_TOKEN_TO_BE_REPLACED