Learn how to make sweet cinnamon cookie bars with cream cheese frosting—entirely from scratch! They taste like cinnamon rolls! Only 82 calories!
Click here to PIN the recipe and save it for later!

A couple of years ago, I flew to Michigan for a retreat with other food bloggers. We started in Grand Rapids and spent our first 24 hours exploring the city before driving out to Lake Michigan for a long weekend.

On our first morning in Grand Rapids, we walked a few blocks away from our hotel to a cute café for brunch. The interior was decorated like a charming French bistro, including brick walls and pillars covered in mosaics.

After looking over the menu for a long time, we each placed our brunch order. Shortly after, the waiter brought over our drinks, and he also set a gigantic cinnamon roll on the table as a breakfast “appetizer” on the house. 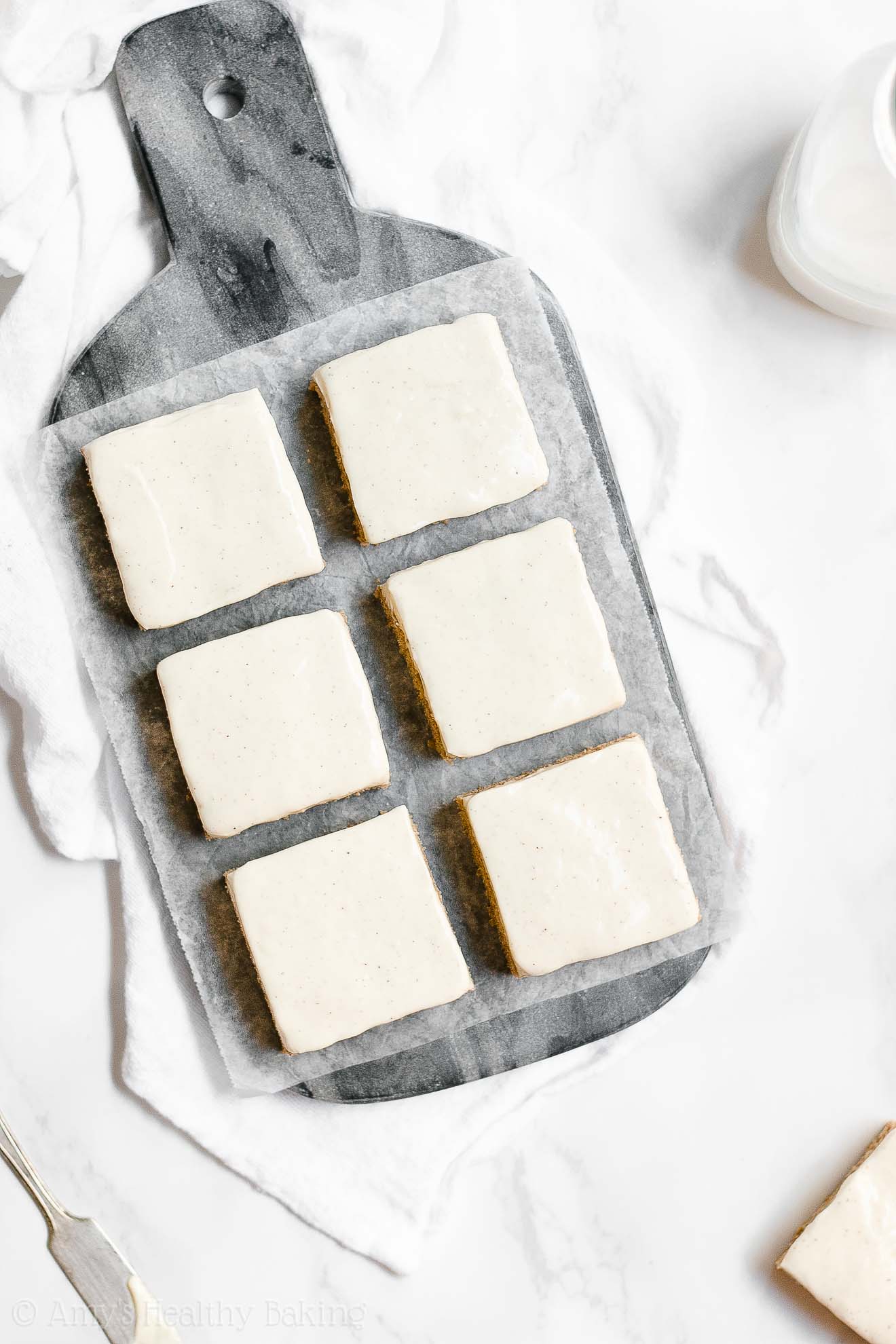 I had never seen a cinnamon roll so big! At least three inches tall and five inches wide, it came in a black skillet topped with another inch or two of cream cheese frosting piled on top. We had to use a fork and knife to cut slices to pass around the table!

After everyone around me took their first bites, it was unanimous: that cinnamon roll was amazing! Warm, cozy, sweet, gooey, doughy… True cinnamon roll perfection. Yet we all agreed an entire one would be a little too much sugar first thing in the morning—and should probably count as dessert instead! 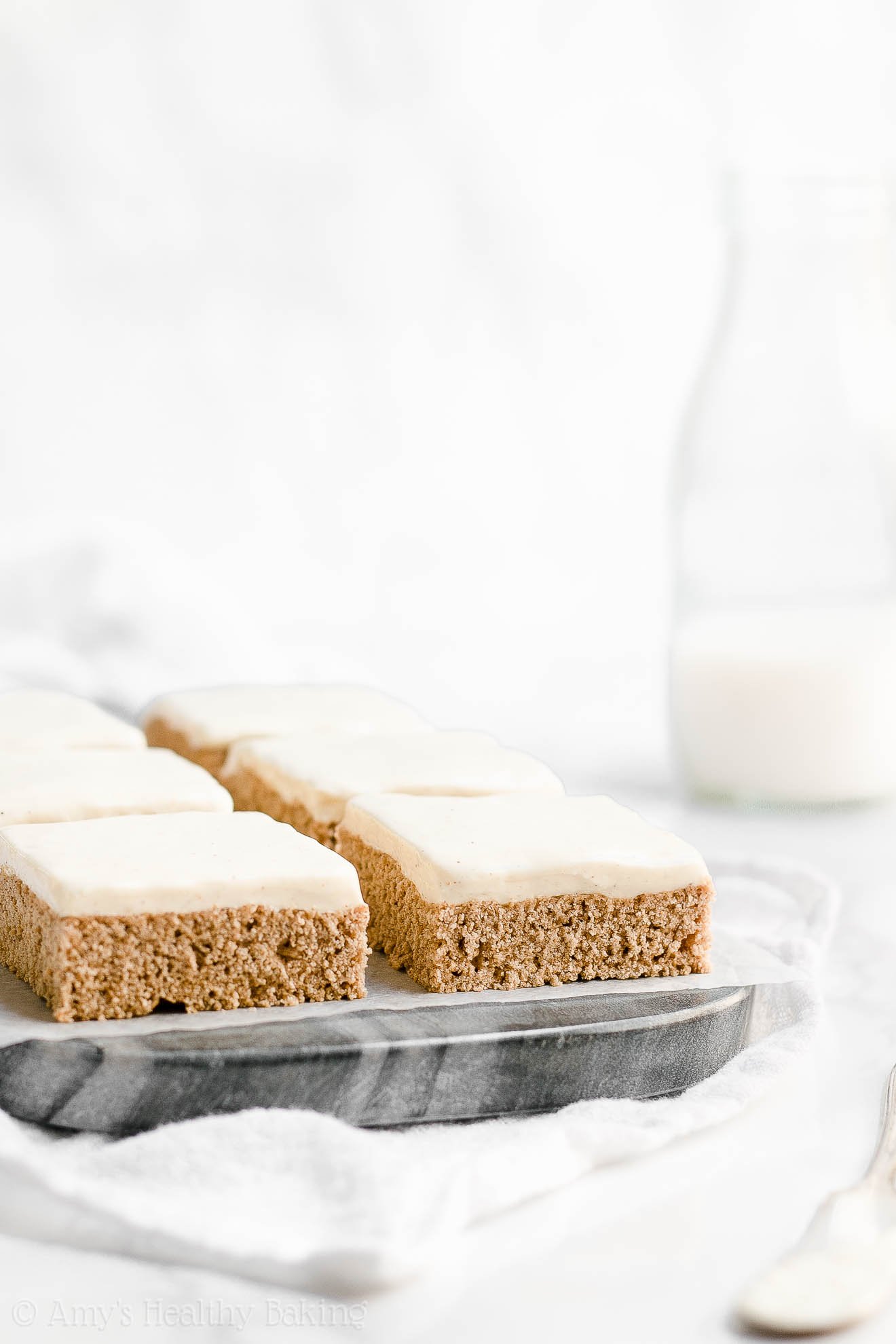 So I took those same sweet cinnamon roll flavors and turned them into these Healthy Cinnamon Roll Cookie Bars! The chewy sugar cookie base has lots of cozy cinnamon, and the sweet cream cheese frosting is the perfect finishing touch.

Yet unlike that original cinnamon roll… These healthy cookie bars contain no refined flour or sugar, and they’re just 82 calories!

So maybe… Eat these healthy cinnamon roll cookie bars for breakfast and save that gigantic Cinnabon-style cinnamon roll with its extra frosting for dessert instead?… ? 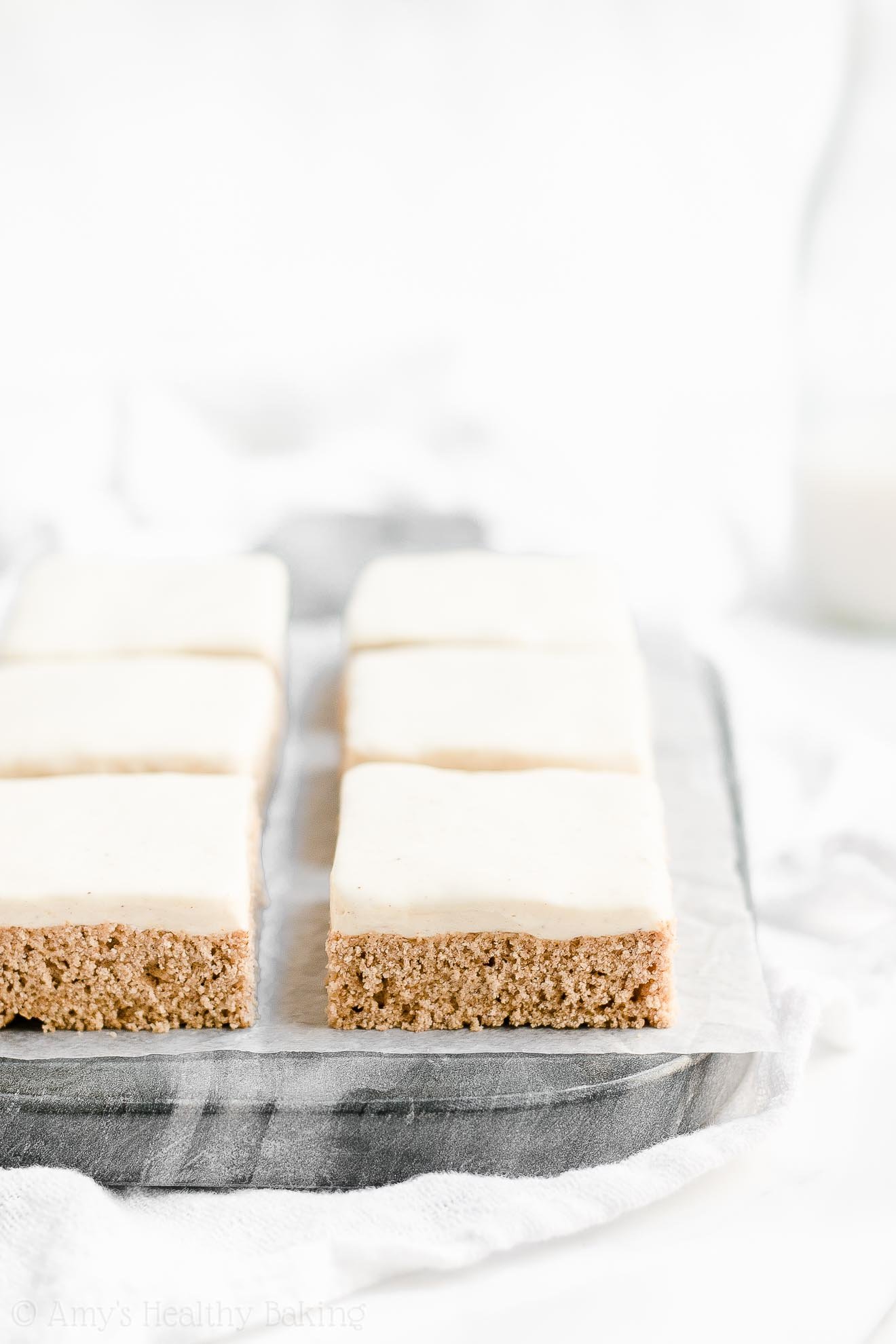 Let’s go over how to make these healthy cinnamon roll cookie bars!

Hint: I’ve also included a gluten-free option in the Notes section, if you prefer!

To make these healthy cinnamon roll cookie bars taste like cinnamon rolls, you’ll also whisk lots of cinnamon into the flour. This is my favorite type of cinnamon. It’s the only one I use in my baking now! It has a stronger, fuller, and slightly sweeter flavor than regular cinnamon. I highly recommend it! 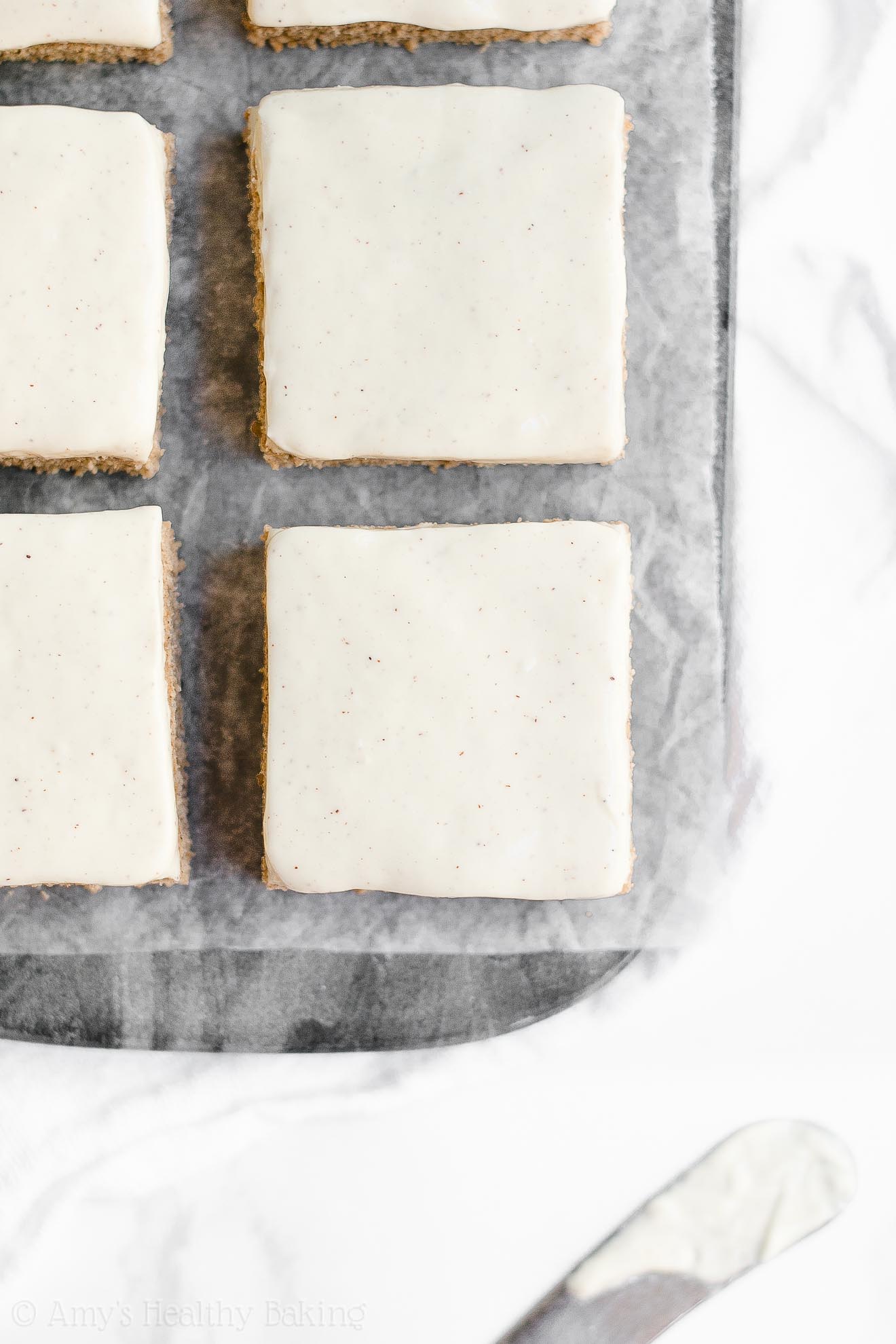 Whereas many traditional recipes call for a full stick or two of butter, these healthy cinnamon roll cookie bars only require 2 tablespoons of butter. Yes, that’s it! That really helps keep these low in calories! ? 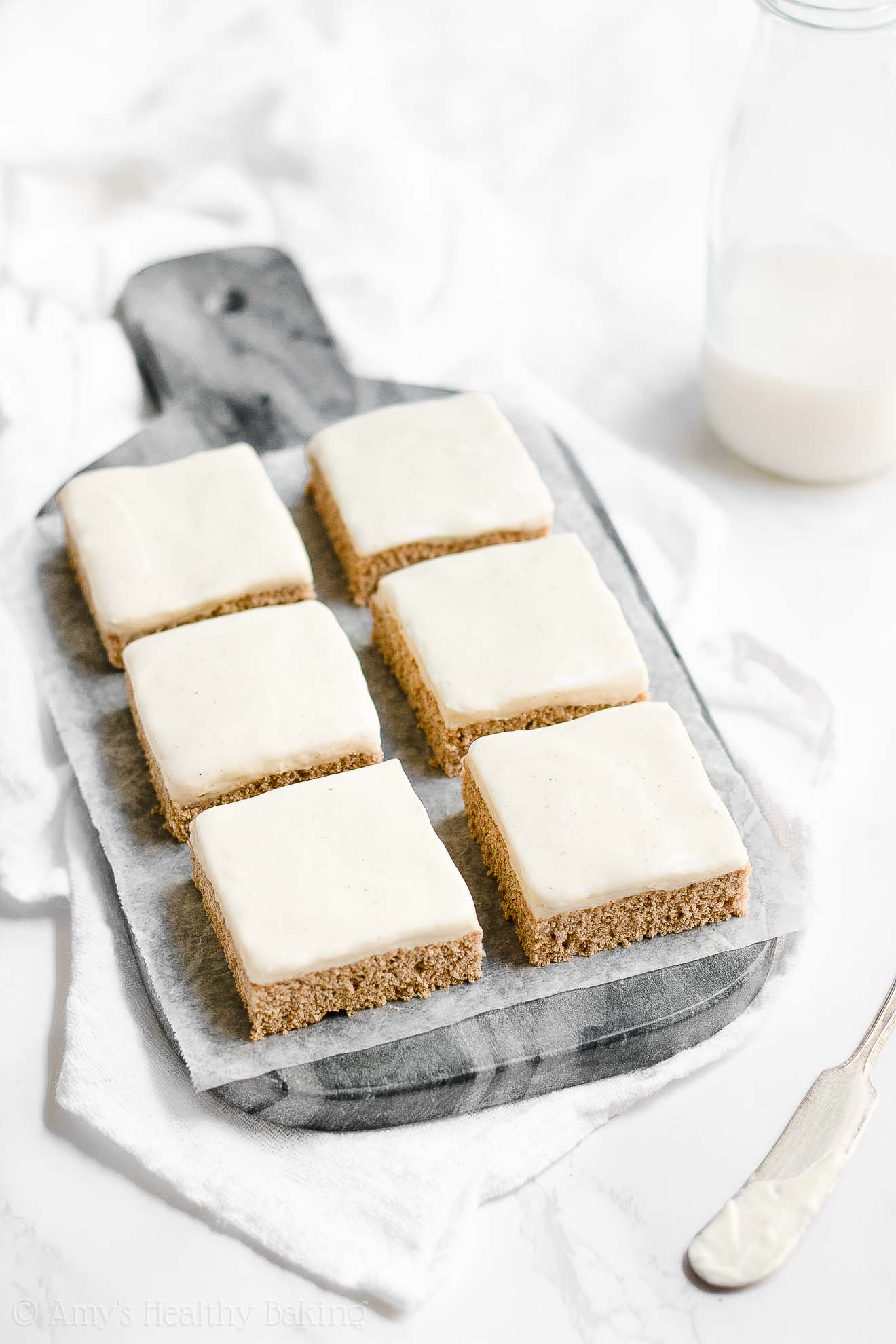 To sweeten your healthy cinnamon roll cookie bars, you’ll use a combination of honey and vanilla stevia (this kind!). If you only used honey, that would add too much liquid to your cookie dough… And your cookie bars would taste bready or cakey instead of chewy!

So that’s why you’ll use half honey and half stevia! Stevia is a plant-based, no-calorie sweetener that contains nothing refined or artificial (aka it’s clean eating friendly). It’s also highly concentrated. You just need 1 teaspoon for these cookie bars—and that definitely prevents you from adding too much liquid to your cookie dough!

This is the vanilla stevia that I use because I love its warm flavor and don’t notice any strange aftertaste like with some other stevia products. Although you can find it at many health-oriented grocery stores, I buy mine online here because that’s the best price I’ve found. (And you’ll use it in all of these recipes of mine, too!) 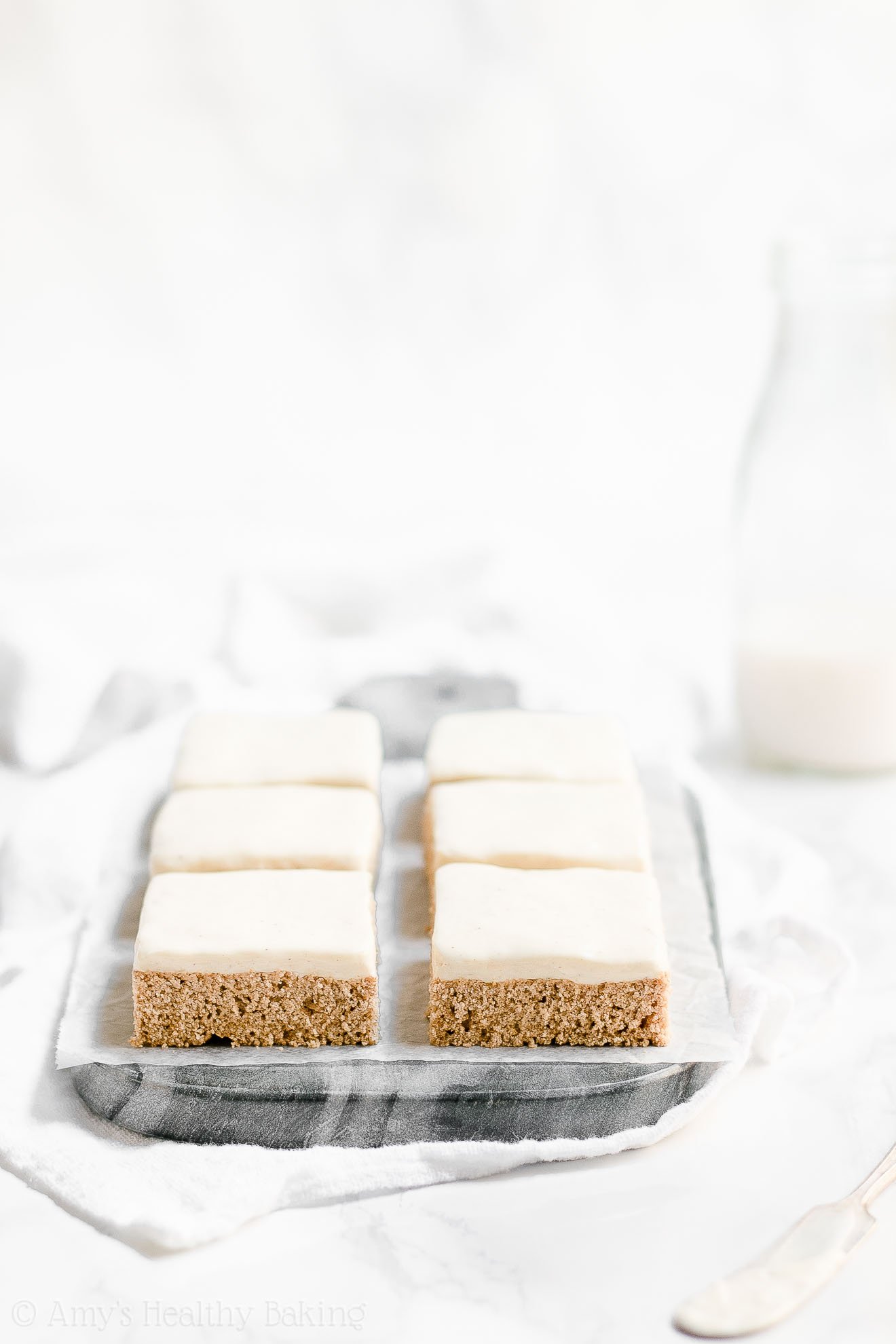 Once you’ve spread your cookie dough into the pan and popped that in the oven, it’s time to make your healthy cream cheese frosting! You’ll need Greek yogurt, light cream cheese, instant pudding mix (this kind!), a bit more vanilla stevia (this one!), and a hint of cinnamon (remember, this is my favorite!).

Then all that’s left to do is frost your healthy cinnamon roll cookie bars, slice them into squares, and… 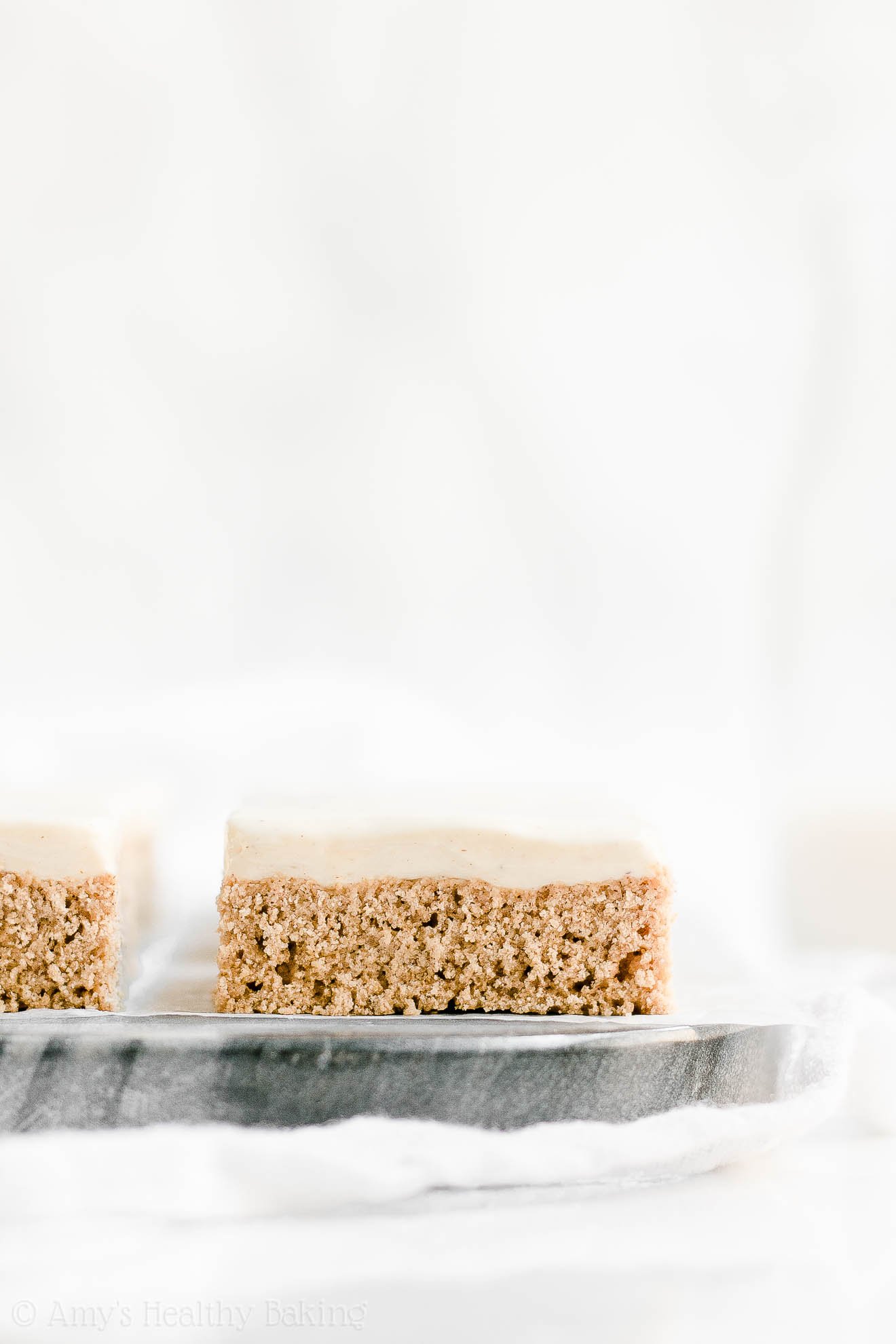 Enjoy! And when you make your own, remember to snap a picture and share it on Instagram using #amyshealthybaking and tagging @amyshealthybaking IN the photo itself! (That guarantees I’ll see your picture! ?) I’d love to see your healthy cinnamon roll cookie bars!

Click here to PIN the recipe and save it for later!
Yields: 16 cookie bars
These sugar cookie bars truly taste like cinnamon rolls! There’s plenty of cinnamon in the chewy cookie bar base, and the sweet cream cheese frosting adds the perfect flavor complement. These cookie bars will keep for at least 3 days if stored in an airtight container in the refrigerator.
Notes: For the gluten-free option, use store-bought gluten-free flour blends (like this one!) and measure them like this.

Be very careful when measuring the flour! Use this method or a kitchen scale. (← That’s the one I own and love!) Too much flour will make your cookie bars turn out dry or cakey, rather than soft and chewy.

Any milk may be substituted for the unsweetened nonfat milk.

This is the vanilla stevia that I use (and you'll also use it in all of these recipes of mine!). I buy mine online here because that's the best price I've found.

You cannot substitute additional honey for the vanilla stevia because the cookies require a precise balance of wet and dry ingredients. However, you may substitute ¾ cup (144g) coconut sugar (or brown sugar or granulated sugar, if you aren’t concerned about keeping these cookies clean eating friendly) for both the honey and stevia, but the cookies will appear “speckled” if using coconut sugar because it doesn’t dissolve as well.

If you prefer not to use the vanilla stevia in the frosting, then substitute 1 teaspoon of this powdered stevia OR 2-3 tablespoons of Truvia or granulated sugar.

The Healthier Chocolate Treats cookbook is perfect for any and all chocolate lovers. Whether you enjoy chocolate occasionally or every single day (that’d be me!), there are plenty of goodies inside for you! Healthier Chocolate Treats contains 50+ brand new healthier recipes. These recipes have never been seen before or appeared on my blog. You won’t find them anywhere else! And yes—every single one contains some form of chocolate. Whether you prefer milk, dark or white, there are lots of treats inside for you!     What Inspired You to Write Healthier Chocolate Treats? I have always loved chocolate. Every Halloween throughout my childhood, I inverted the entire contents of my bright … END_OF_DOCUMENT_TOKEN_TO_BE_REPLACED