Learn how to make these extra fudgy brownies from scratch! They taste so rich and decadent! Only 77 calories and just as easy to make as a box mix!
Click here to PIN the recipe and save it for later! 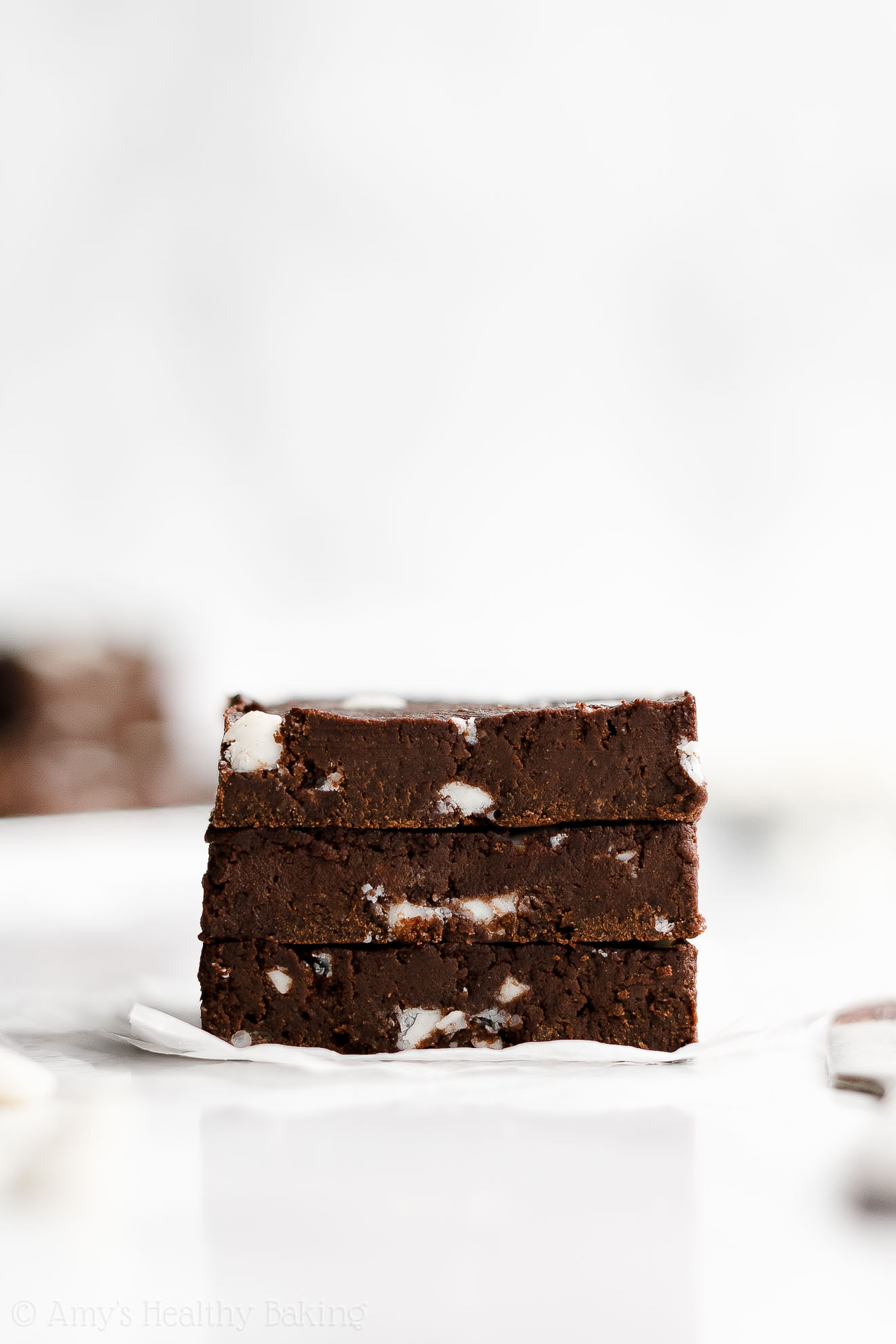 For three years during high school, our marching band director scheduled a competition trip for us in December during the second half of winter break. Just a few days after Christmas, we packed our suitcases, met in the school parking lot, and loaded our luggage and instruments onto five big charter buses before settling back into the plush seats as the drivers eased us onto the freeway, headed for Southern California.

After finishing the field show competitions, our band director also organized a parade in Disneyland, usually shortly after lunch on January 1st. A park employee led us backstage through Toontown, where we changed into our uniforms, walked us around the backside of Tomorrowland, and brought us out through the side gates right at the start of Main Street to perform popular Christmas songs in a holiday-themed parade. 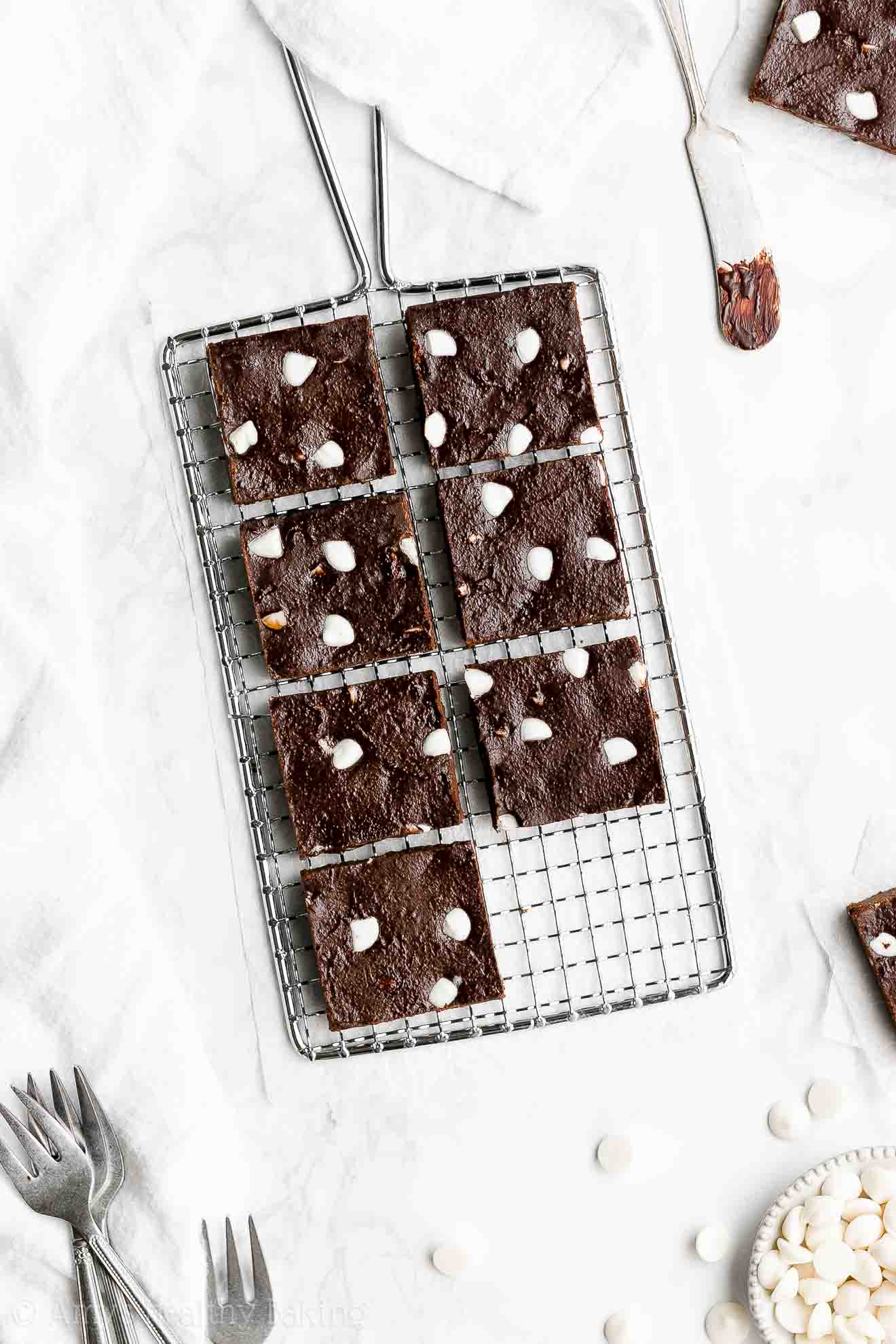 But before and after the parade, we ran all around the park, enjoying the rides and snapping pictures with the characters just like regular Disneyland visitors. We especially loved that January 1st morning… We had the park almost entirely to ourselves because most other people seemed to sleep in after staying up late for New Year’s Eve, so there were virtually no lines, even at the most popular rides like the Matterhorn, Space Mountain, and Indiana Jones!

In between rides, my friends and I usually stopped by our favorite Disneyland restaurant, Pizza Port in Tomorrowland, for dinner. The slices they served were bigger than my head, so I often split one with someone else to save room for dessert.

And of course, my favorite treat was something really chocolaty… The oversized, completely gigantic, extra rich and fudgy brownies! If Pizza Port ran out by the time we arrived, I slipped into one of the sweets shops on Main Street right before exiting the park to get my chocolate fix before hopping back on the buses. 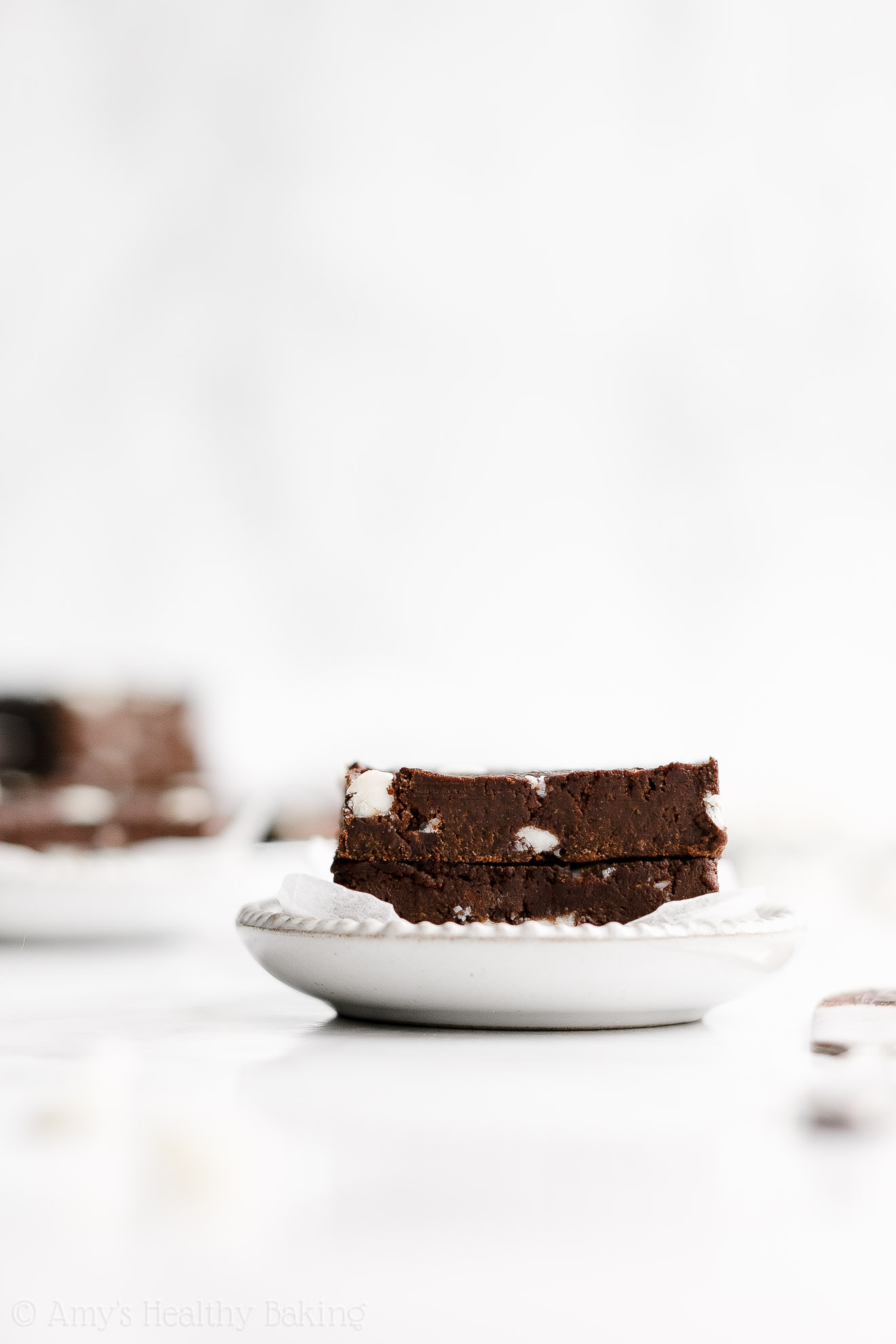 Although it’s been many years since my last Disneyland brownie, the memories are still just as strong as their rich chocolate flavor. Since I probably won’t get a chance to go back this Christmas, I decided to bake these Healthy Fudgy White Chocolate Chip Brownies to satisfy my winter break brownie cravings!

They’re supremely decadent and fudgy, just like the ones from Disneyland, but these contain no refined flour or added refined sugar… And they’re just 77 calories! 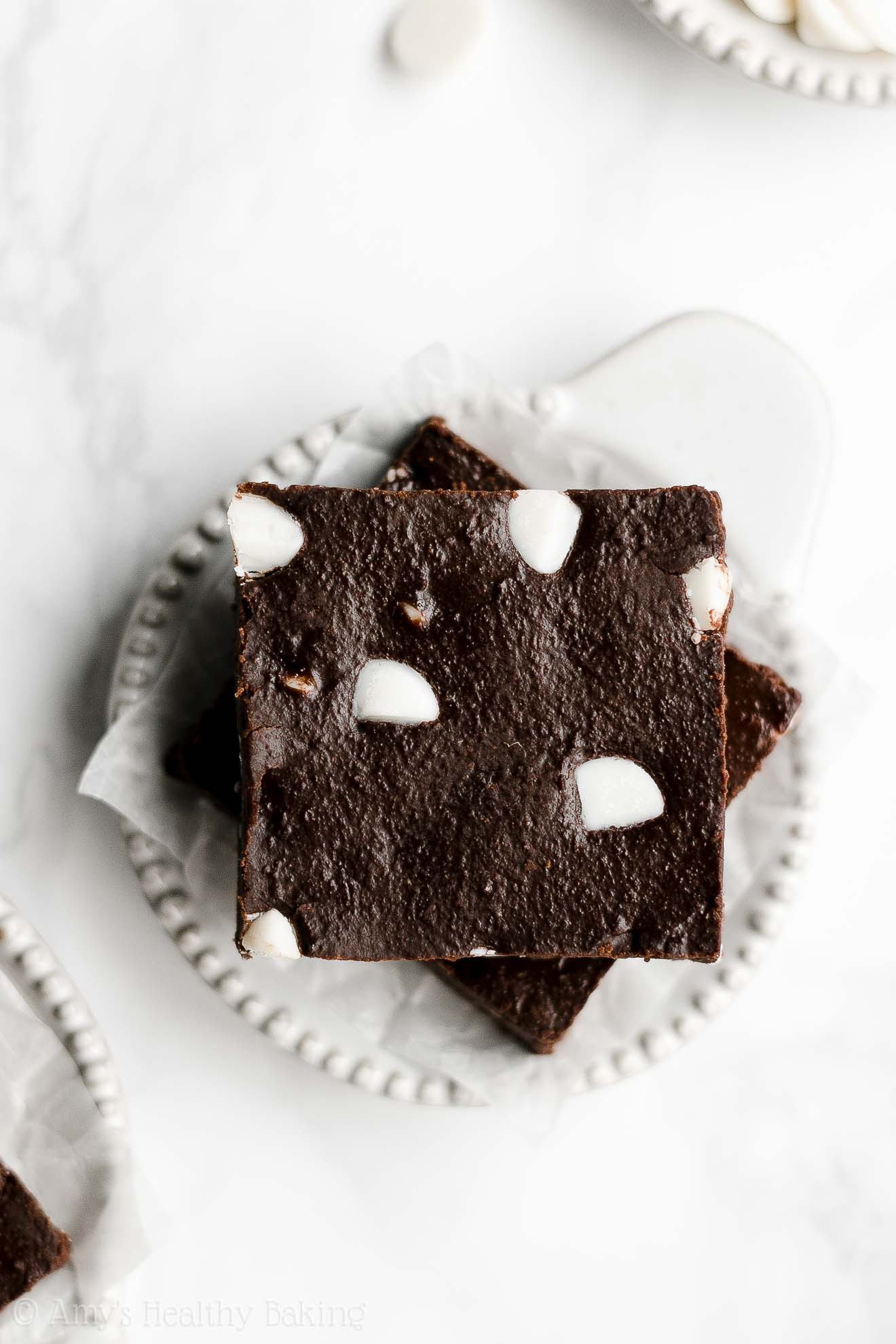 So let’s go over how to make these healthy fudgy white chocolate chip brownies!

Whole wheat pastry flour is a bit different than regular whole wheat flour. Although they both have the same health benefits, like extra fiber, whole wheat pastry flour is made by grinding soft white wheat extremely finely, which results in a much lighter taste and texture. And that, dear chocoholic, is what lets the extremely rich and fudgy flavors of your healthy white chocolate chip brownies truly shine! 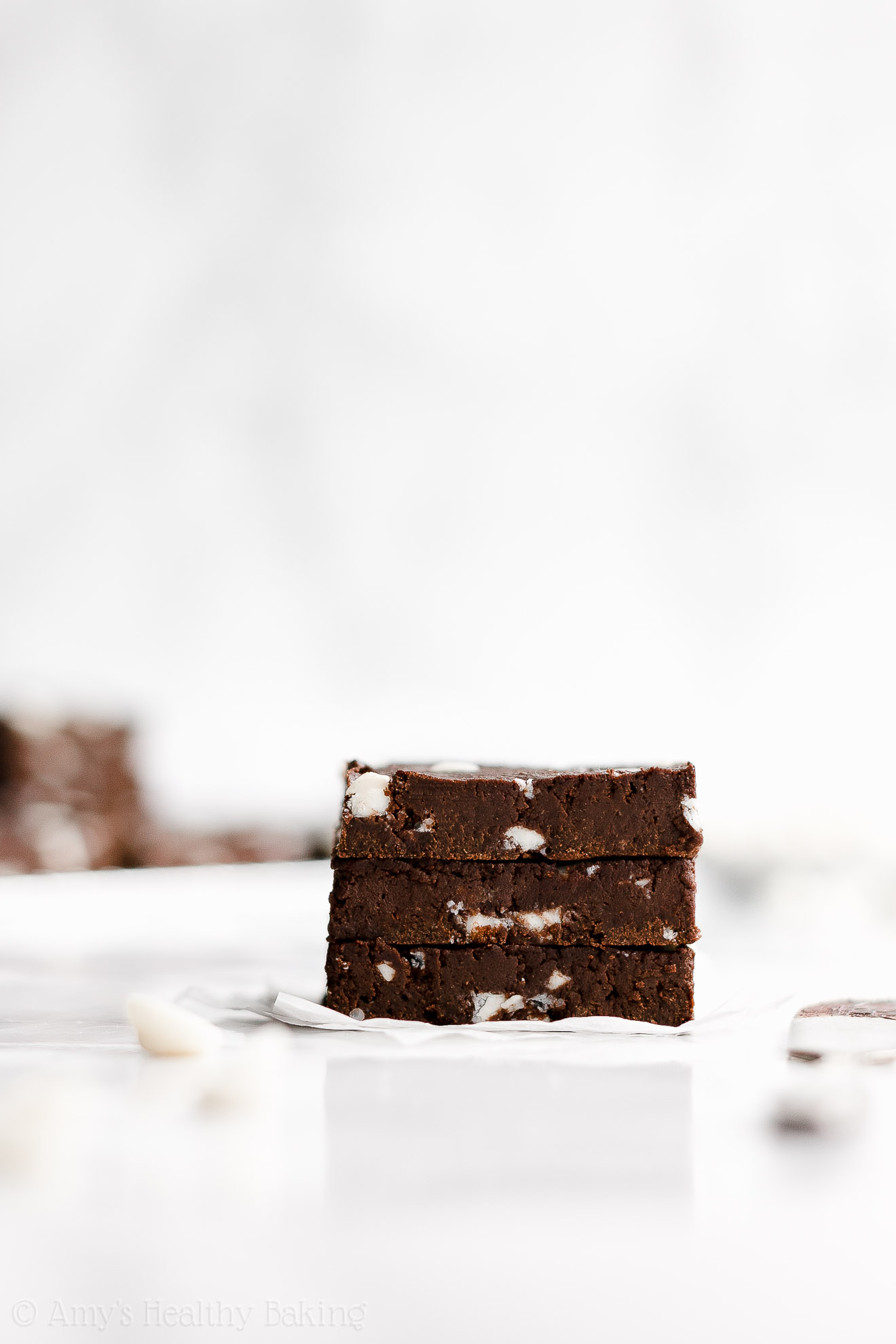 Unlike traditional brownie recipes that call for a full stick or two of melted butter (yikes!), these healthy white chocolate chip brownies only require 1 tablespoon. That definitely helps keep them low fat and low calorie!

Then the rest of their supremely moist and fudgy texture comes from one of my favorite ingredients: Greek yogurt! Greek yogurt adds the same moisture to your batter as extra butter or oil but for a fraction of the calories, and it gives your healthy white chocolate chip brownies a protein boost, too! 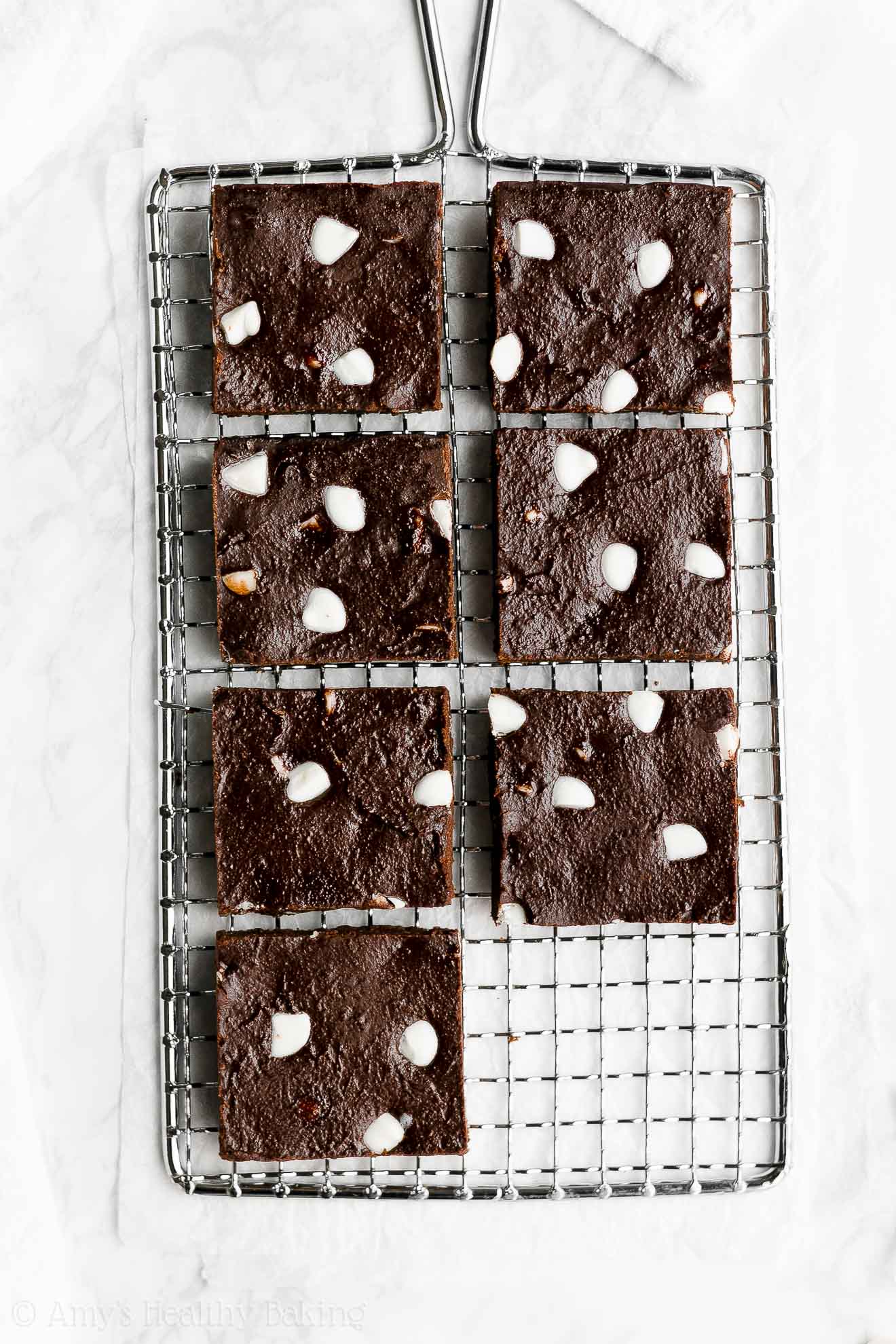 You’ll skip the refined granulated sugar and sweeten your brownies with coconut sugar instead. Coconut sugar is exactly what it sounds like: an unrefined sweetener that comes from coconuts! However, it does not actually taste like coconuts. It has a rich caramel-like flavor, similar to brown sugar, and you can usually find it on the baking aisle right next to the granulated sugar.

Since my family loved these secret ingredient cookies so much, I decided to mix chopped white chocolate into these fudgy brownies as well! That added a lovely sweetness and richness to the treats. I always save some of my chopped chocolate to press into the tops of my brownies. Doesn’t that make these healthy fudgy white chocolate chip brownies look so inviting and irresistible? 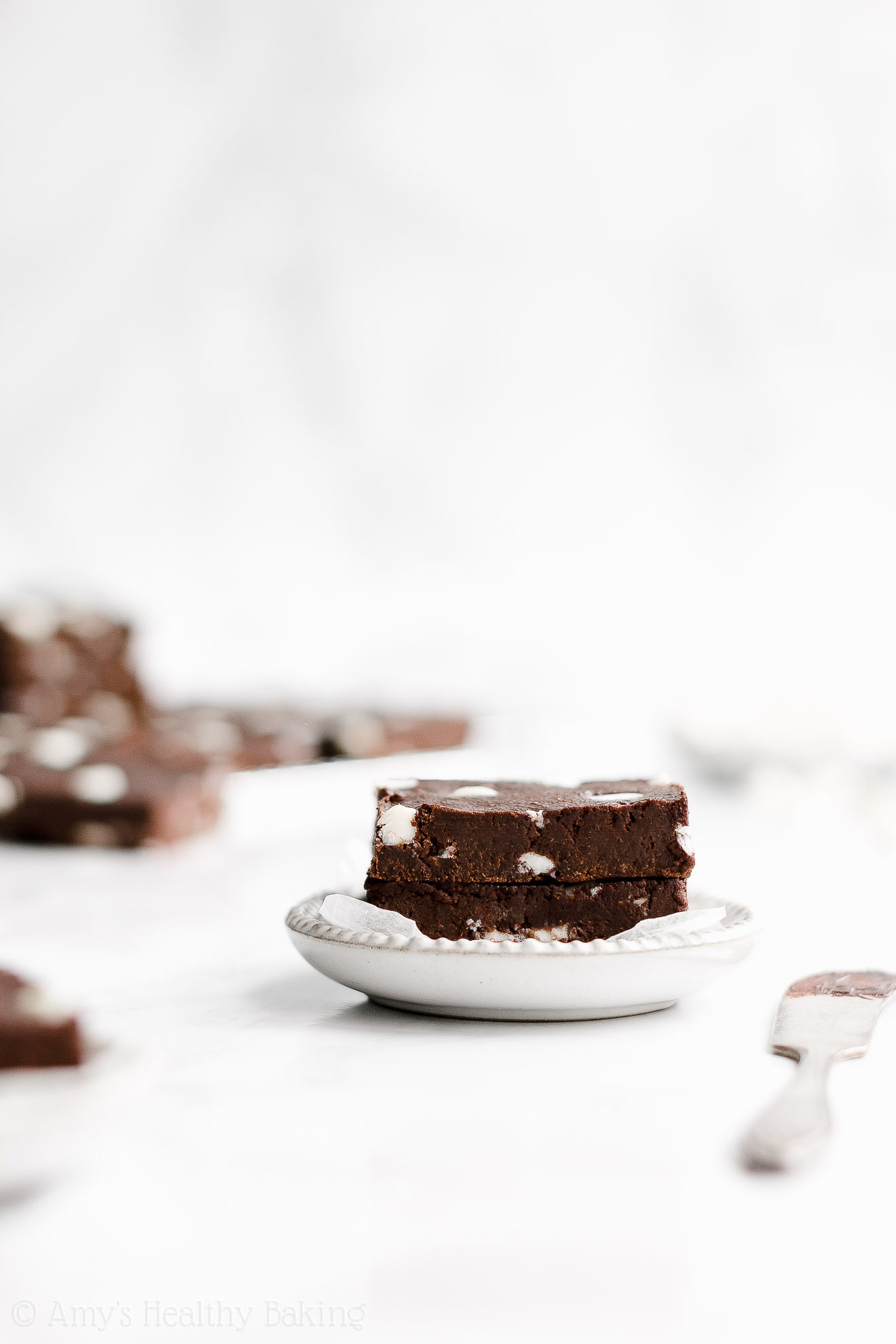 Time to bake! You’ll actually set your oven to just 300°F, rather than the usual 350°F for most baking recipes. This low temperature allows the center to cook through without the edges turning dry and crunchy.

However… Your brownies actually finish baking relatively quickly, after just 15 minutes! The center will still look glossy and underdone when it’s time to remove them from the oven. That’s a good thing! The center will continue to cook all the way through in the warm pan as you let them cool completely to room temperature.

One last thing! I know it feels like pure torture, but you must wait at least 6 hours once your brownies have reached room temperature before slicing and serving. The brownies turn fudgier over time. It’s like magic! If you slice into them while they’re still warm from the oven, or even as soon as they’re at room temperature, they’ll have a cakier texture. But if you let them rest for at least 6 hours once they’re at room temperature (not just 6 hours after you remove them from the oven!), they’ll be supremely fudgy—literally like oversized squares of fudge! 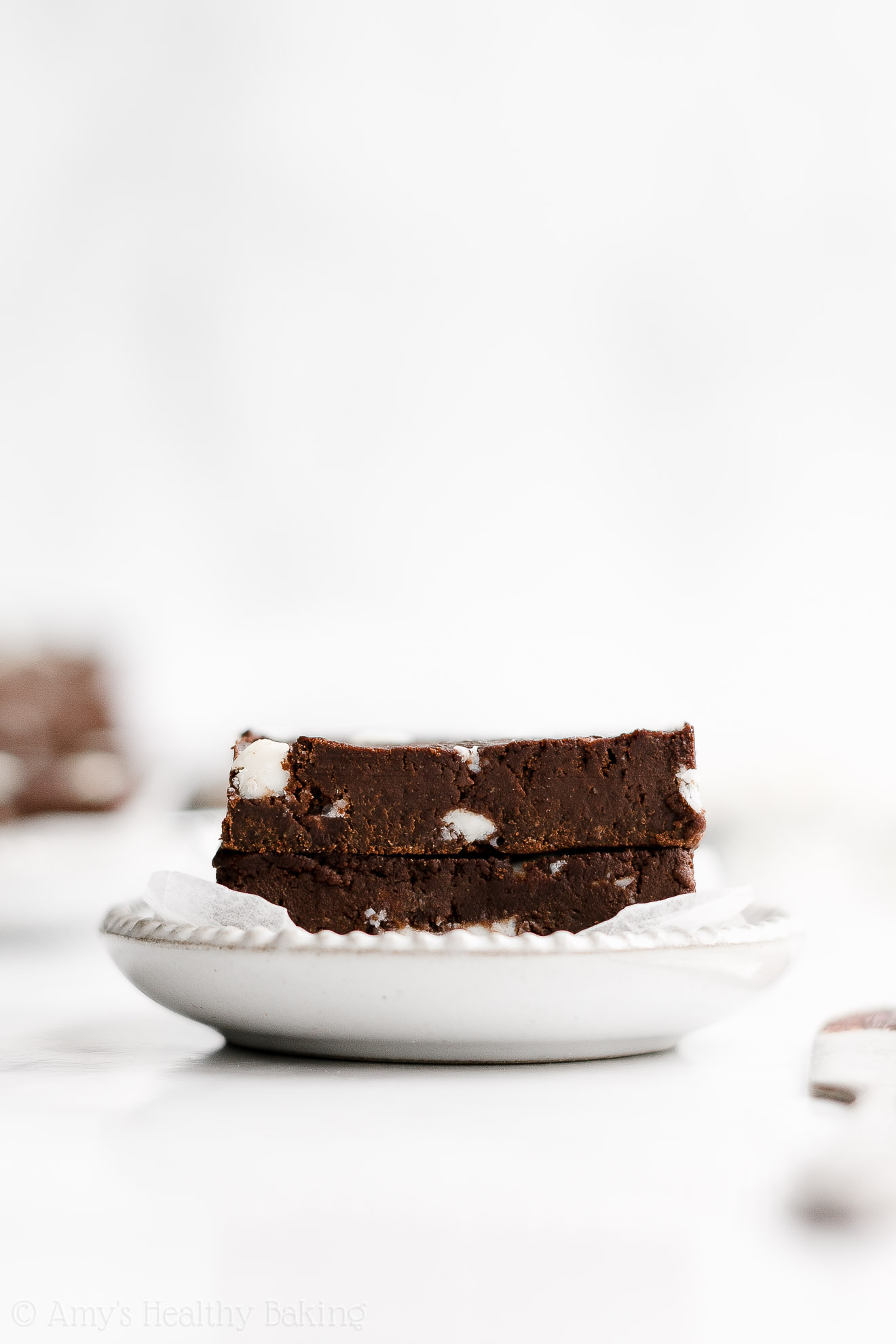 And I’m definitely a huge fan of extra fudgy brownies! ? And when you make your own, remember to snap a picture and share it on Instagram using #amyshealthybaking and tagging @amyshealthybaking IN the photo itself! (That guarantees I’ll see your picture! ?) I’d love to see your healthy fudgy white chocolate chip brownies!

Click here to PIN the recipe and save it for later!
Yields: 16 brownies
These brownies are supremely rich and fudgy, and they’re just as easy as a box mix to make! They taste similar to 72% dark chocolate, just perfect for anyone who loves decadent chocolate treats. Leftovers will keep for at least one week if stored in an airtight container in the refrigerator, and they freeze well, too!
Notes: For the gluten-free flour, use as follows: ½ cup (60g) millet flour, 2 tablespoons (15g) brown rice flour, 2 tablespoons (15g) tapioca flour, and ½ teaspoon xanthan gum. Most store-bought gluten-free flour blends (like this one!) will work as well, if measured like this.

For the fudgiest texture, you must wait 6+ hours after your brownies reach room temperature before slicing and serving! If you cut into them while warm, they’ll taste cakey instead of fudgy. The brownies turn fudgier the longer they rest on the counter. I promise it’s worth the wait!

The Healthier Chocolate Treats cookbook is perfect for any and all chocolate lovers. Whether you enjoy chocolate occasionally or every single day (that’d be me!), there are plenty of goodies inside for you! Healthier Chocolate Treats contains 50+ brand new healthier recipes. These recipes have never been seen before or appeared on my blog. You won’t find them anywhere else! And yes—every single one contains some form of chocolate. Whether you prefer milk, dark or white, there are lots of treats inside for you!     What Inspired You to Write Healthier Chocolate Treats? I have always loved chocolate. Every Halloween throughout my childhood, I inverted the entire contents of my bright … END_OF_DOCUMENT_TOKEN_TO_BE_REPLACED