An easy, no-mixer-required recipe for extra fudgy brownies full of bright orange and rich chocolaty flavors. No butter, refined flour or sugar & only 75 calories!
Click here to PIN the recipe and save it for later! 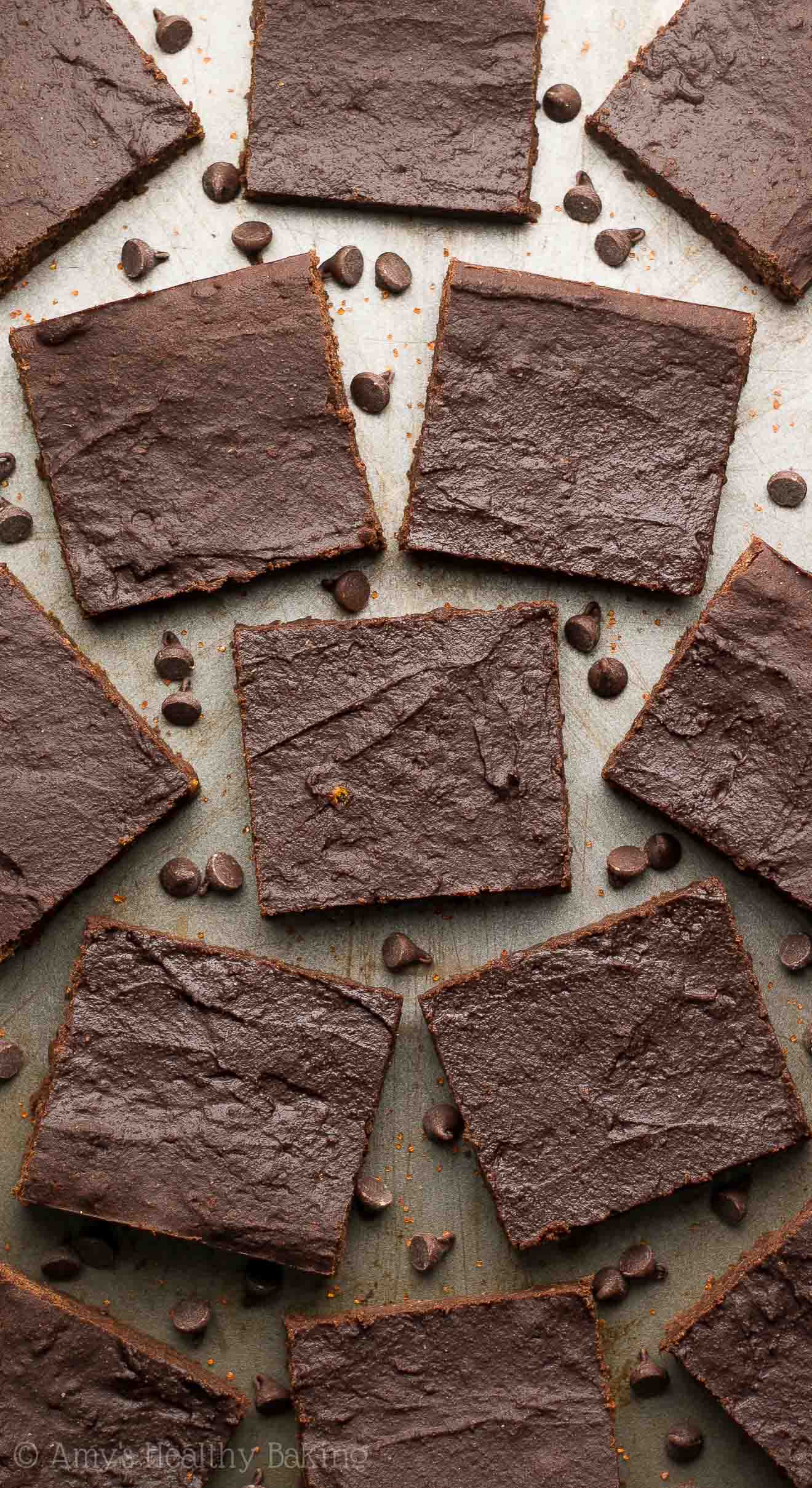 This past weekend, something exciting happened… Something that I’ve been waiting for {rather impatiently!} since November… Spring Training baseball games finally started!

My dad and I are huge baseball fans, and we’re in the process of visiting all 30 Major League stadiums together. (We’ve been to 22 so far!) After I listened to games on my MLB app radio on Sunday, we began tossing around travel dates for this year’s stadiums—and Mom decided to join in too! 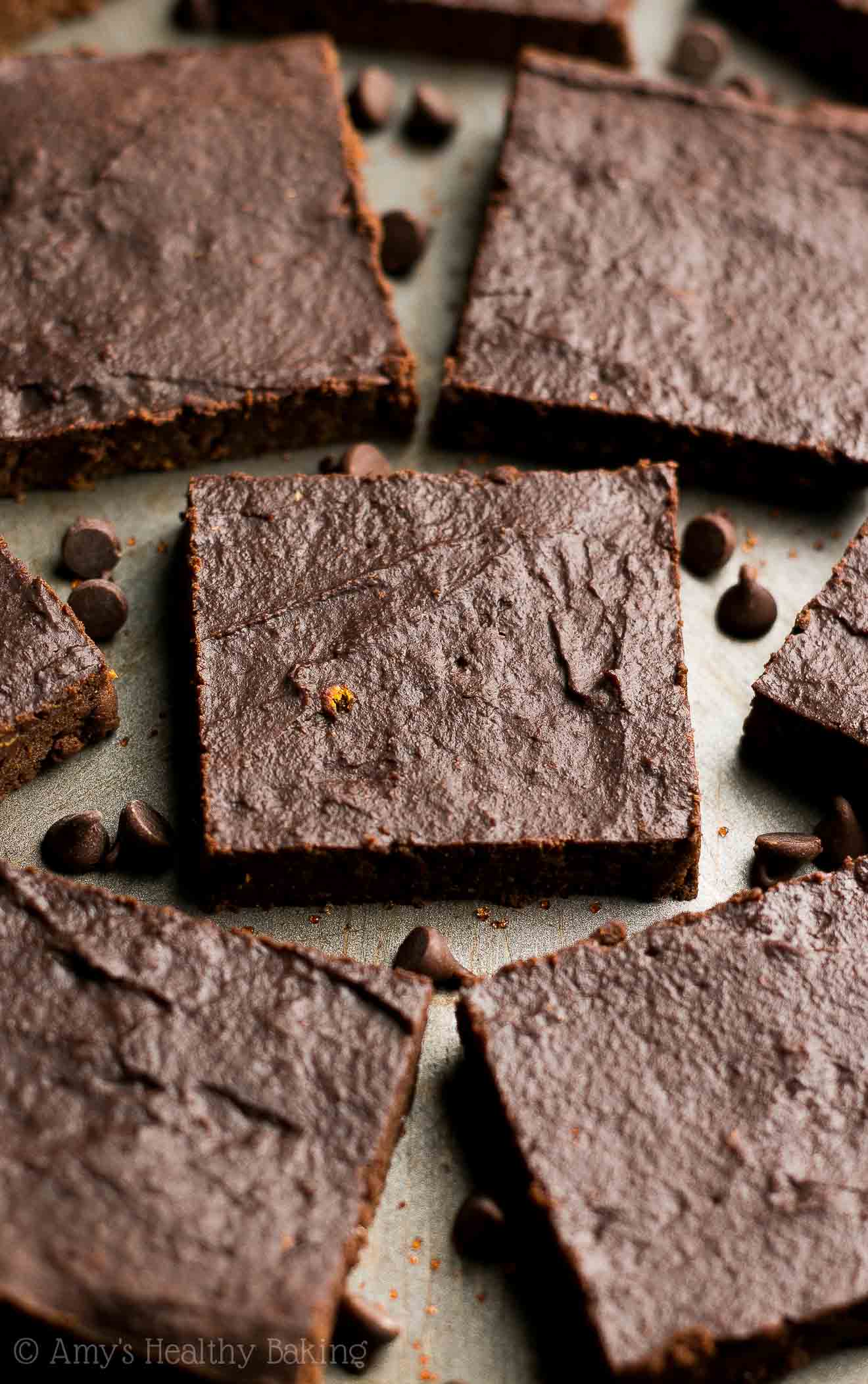 That evening, we booked flights to the Midwest to see Kansas City and St. Louis, and we tentatively set aside dates to head back to New York City. Although we checked off Shea and the old Yankee stadium from our list during my teenage years, we still haven’t visited either of the new NY stadiums!

Then, realizing how often Mom flies back to Arizona to check in on my grandparents, we thought about squeezing in another Diamondbacks game. Despite visiting Chase Field (previously Bank One Ballpark, aka the BOB!) multiple times already, it’s still one of our favorite stadiums. It even has a pool for fans behind the right field fence!

With how much excitement is bubbling up inside of me, I may end up packing my suitcases before the regular season even starts in April… ? 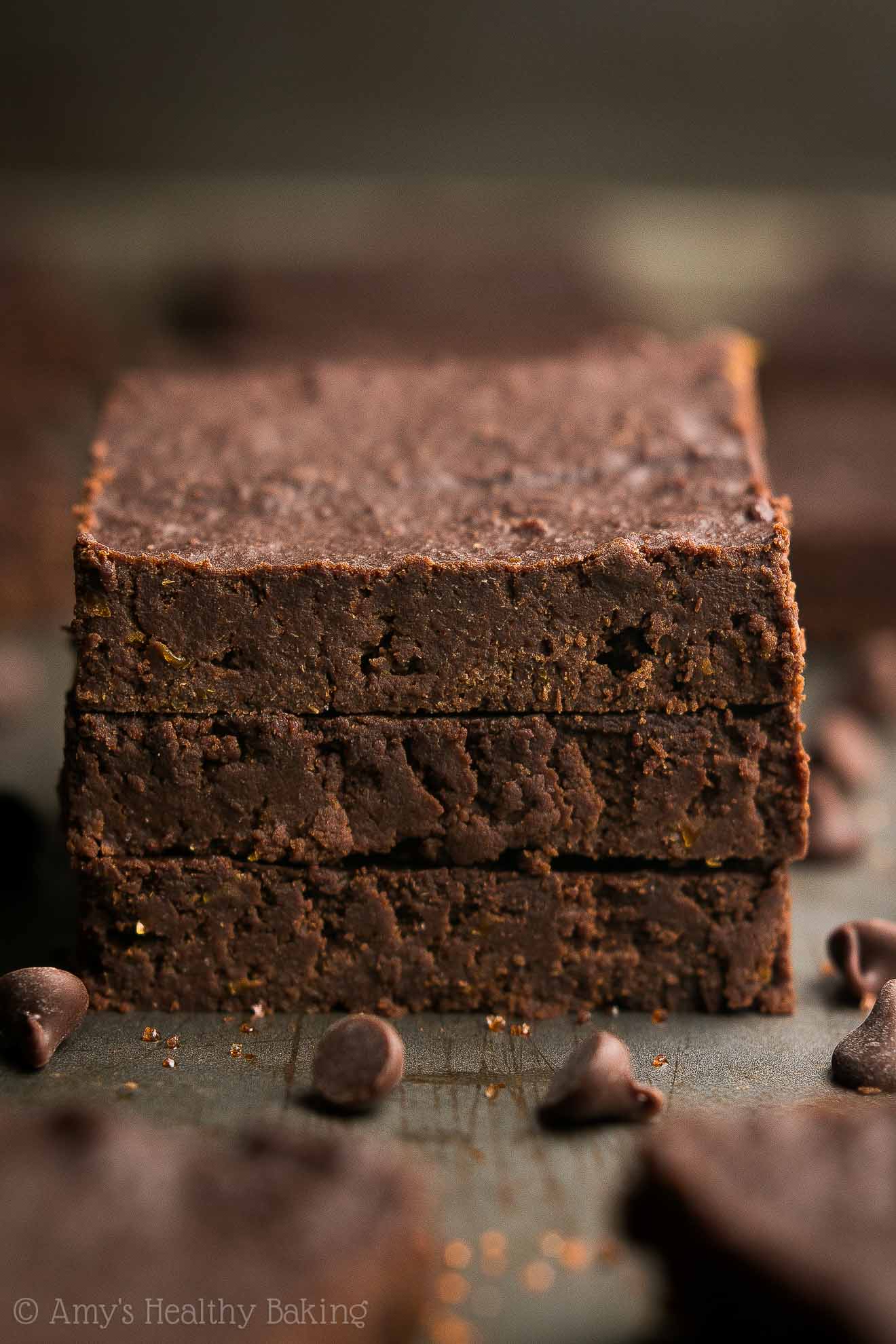 At the very least, this first weekend of baseball inspired me to bake one of my favorite desserts, yet with a fun sunshiny flavor twist as bright and happy as my heart felt after listening to games and finalizing travel plans… Which resulted in these Healthy Fudgy Dark Chocolate Orange Brownies! (Yes, brownies are basically my all-time favorite dessert!) This easy, no-mixer-required recipe contains no butter, refined flour or sugar—and just 75 calories! 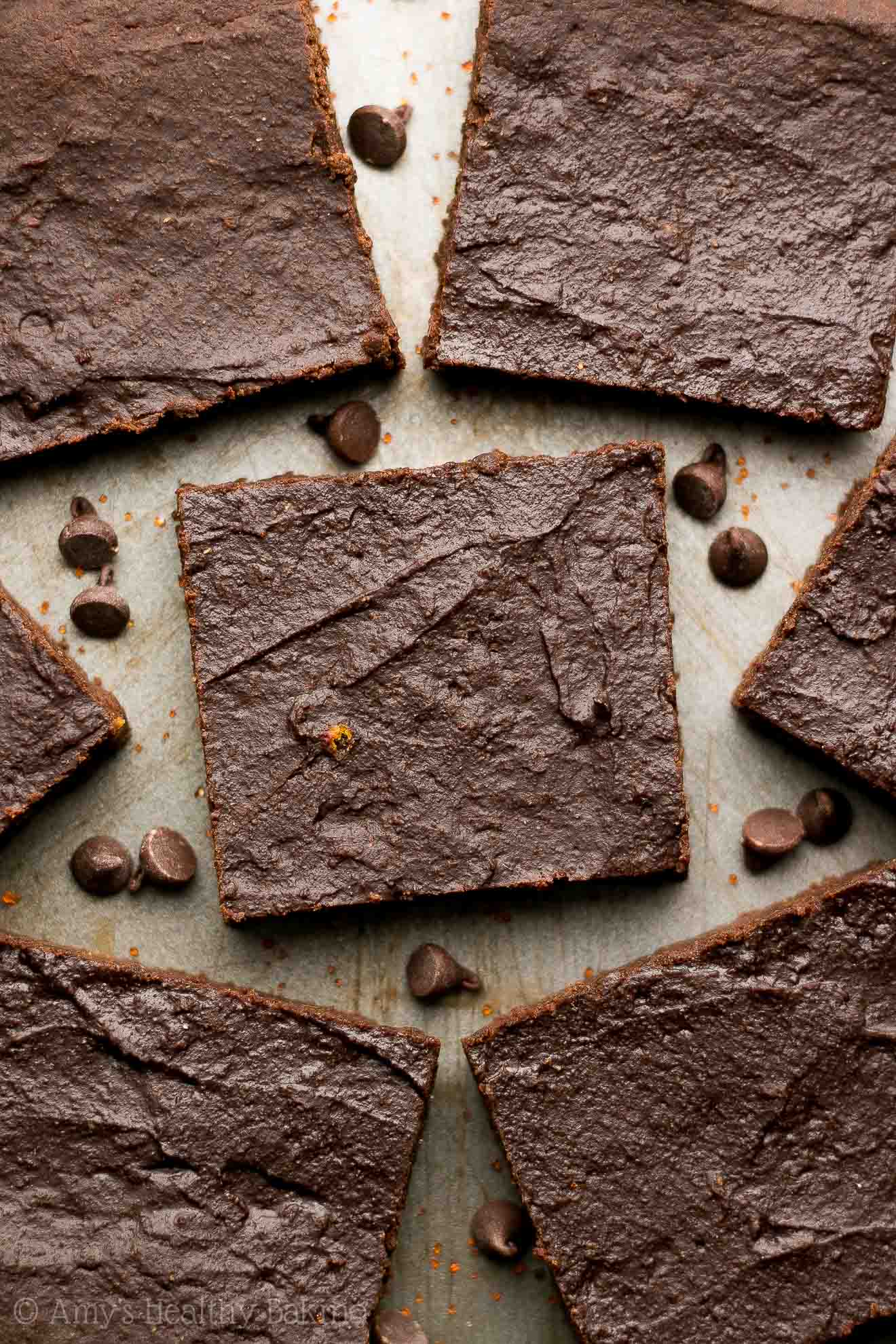 Note: I’ve included my favorite gluten-free flour options in the Notes section underneath the recipe Instructions, if you prefer!

As for the second ingredient, just use regular ol’ unsweetened cocoa powder. You’re adding the same amount of cocoa powder as you are flour, so the brownies already taste exceptionally rich and chocolaty without Dutched or special dark cocoa powder. Just make sure you measure it correctly, using this method or a kitchen scale (← that’s the one I own and LOVE!), because too much cocoa powder will dry out your brownies and give them a bitter flavor. 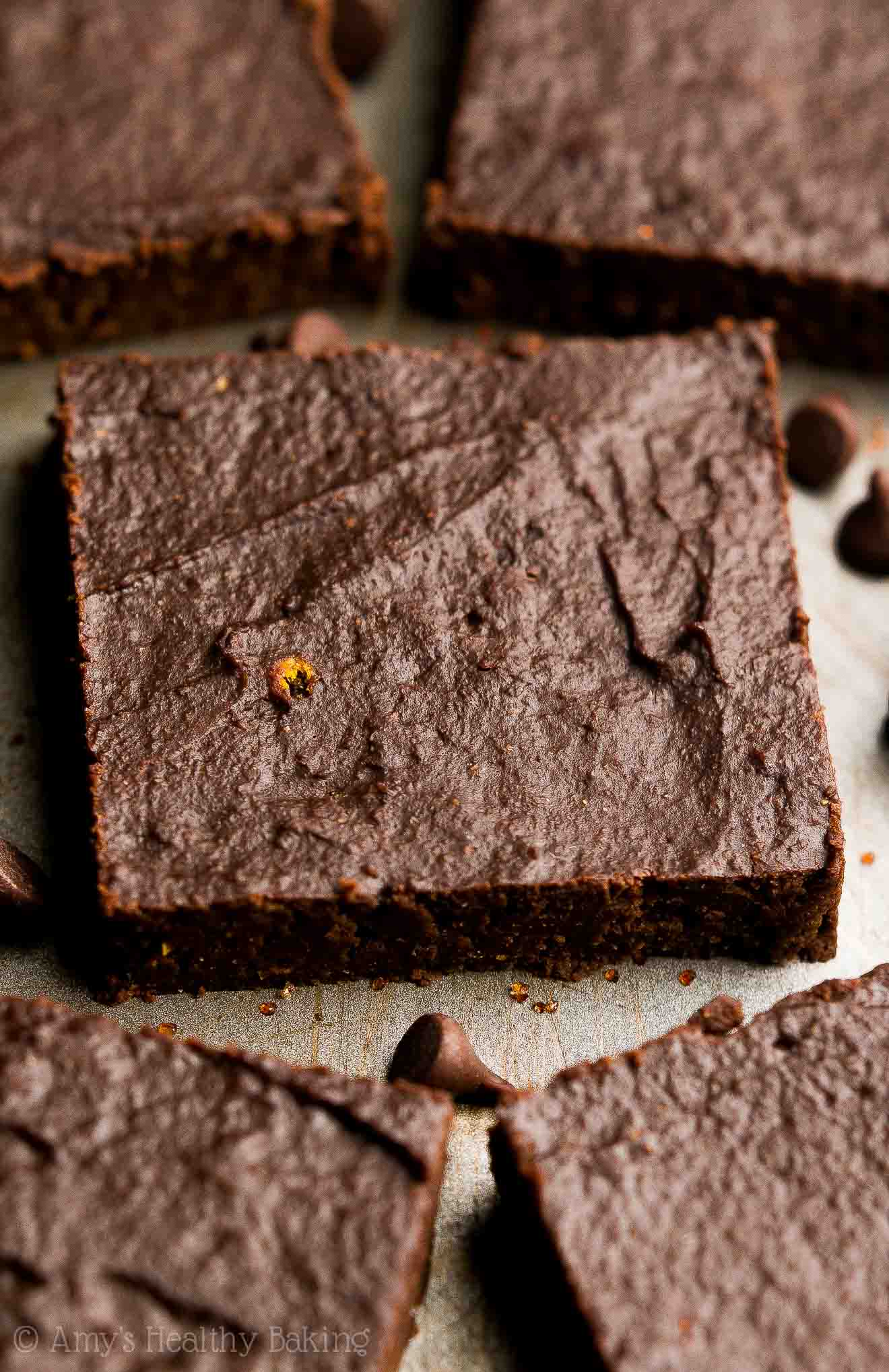 To keep these brownies fudgy and tender without two sticks of butter or a cup of oil, you’ll use one of my favorite ingredients in healthier baking: Greek yogurt! Greek yogurt adds the same moisture as extra butter or oil for a fraction of the calories, and it gives your brownies a protein boost, too.

To sweeten your brownies, you’ll skip the granulated sugar and use coconut sugar instead! Coconut sugar is exactly what it sounds like: an unrefined sweetener that comes from coconuts. However, it does NOT actually taste like coconuts! It has a rich, caramel-like flavor, similar to brown sugar, and you can find it at many grocery stores near the regular sugars. (Or online here!)

For the fruity flavor, you’ll use both orange juice and orange zest. Don’t skip the latter! The zest actually provides the majority of the orange flavor because the citrus taste is highly concentrated in the orange peel. I promise it’s worth the extra effort of finding (and then washing!) your zester! 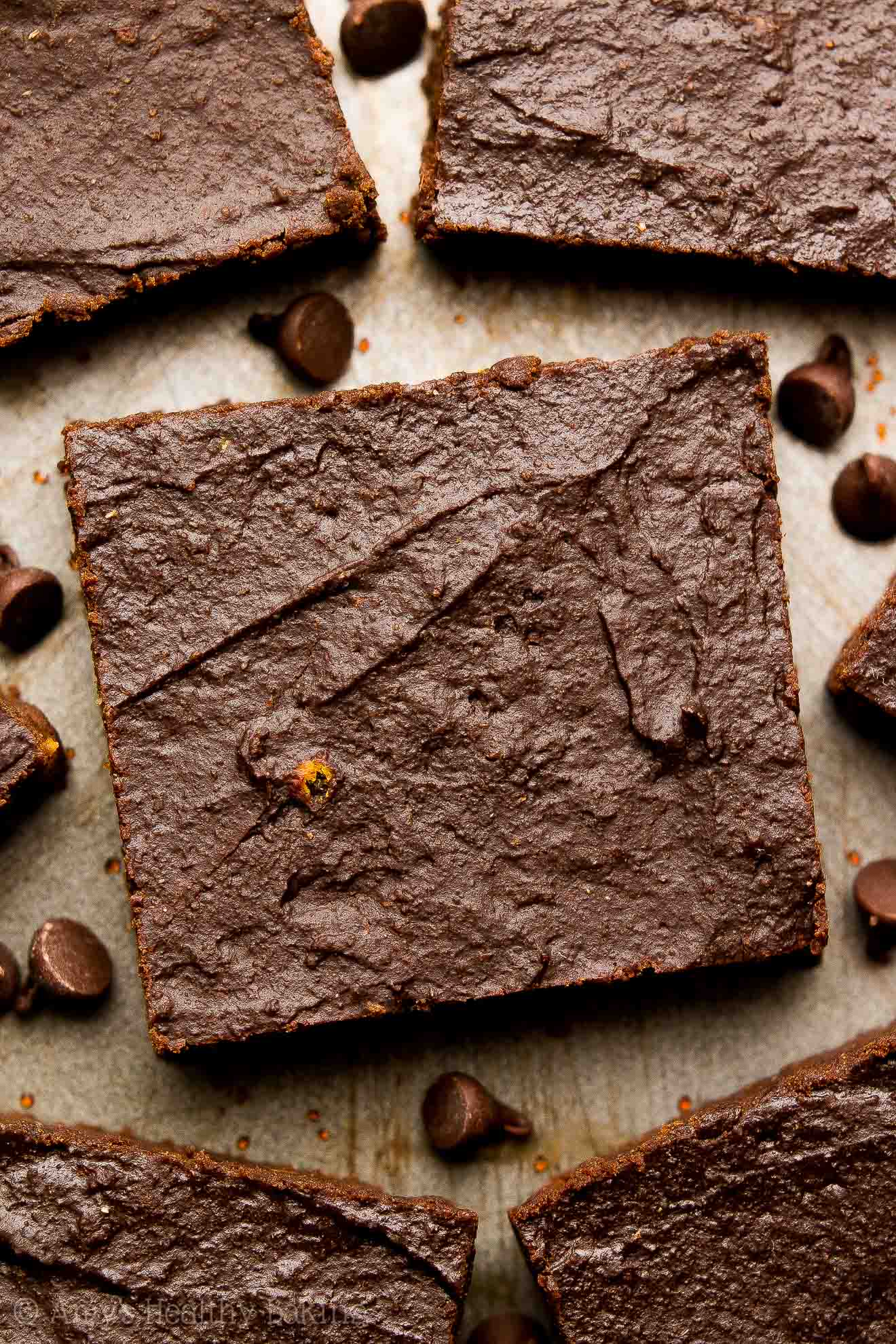 Ready for an extra chocolaty dessert? ? And when you make your own, remember to snap a picture and share it on Instagram using #amyshealthybaking and tagging @amyshealthybaking IN the photo itself! (That guarantees I’ll see your picture! ?) I’d love to see your brownies and feature them in my Sunday Spotlight series!

Click here to PIN the recipe and save it for later!
Yields: 16 brownies
These fudgy brownies are always a huge hit! With my family, around my friends, at a potluck… Everyone raves about them after the first bite! They’re supremely fudgy and perfect for chocoholics. The brownies will keep for at least a week if stored in an airtight container in the refrigerator.
Notes: For the gluten-free flour, use as follows: ½ cup (60g) millet flour, 2 tablespoons (15g) brown rice flour, 2 tablespoons (15g) tapioca flour, and ½ teaspoon xanthan gum. Most store-bought gluten-free flour blends will work as well, if measured like this.

The Healthier Chocolate Treats cookbook is perfect for any and all chocolate lovers. Whether you enjoy chocolate occasionally or every single day (that’d be me!), there are plenty of goodies inside for you! Healthier Chocolate Treats contains 50+ brand new healthier recipes. These recipes have never been seen before or appeared on my blog. You won’t find them anywhere else! And yes—every single one contains some form of chocolate. Whether you prefer milk, dark or white, there are lots of treats inside for you!     What Inspired You to Write Healthier Chocolate Treats? I have always loved chocolate. Every Halloween throughout my childhood, I inverted the entire contents of my bright … END_OF_DOCUMENT_TOKEN_TO_BE_REPLACED