A quick one-bowl recipe for supremely rich and fudgy brownies. They’re as easy as a box mix to make, but they’re just 68 calories with no refined flour or sugar!
Click here to PIN the recipe and save it for later! 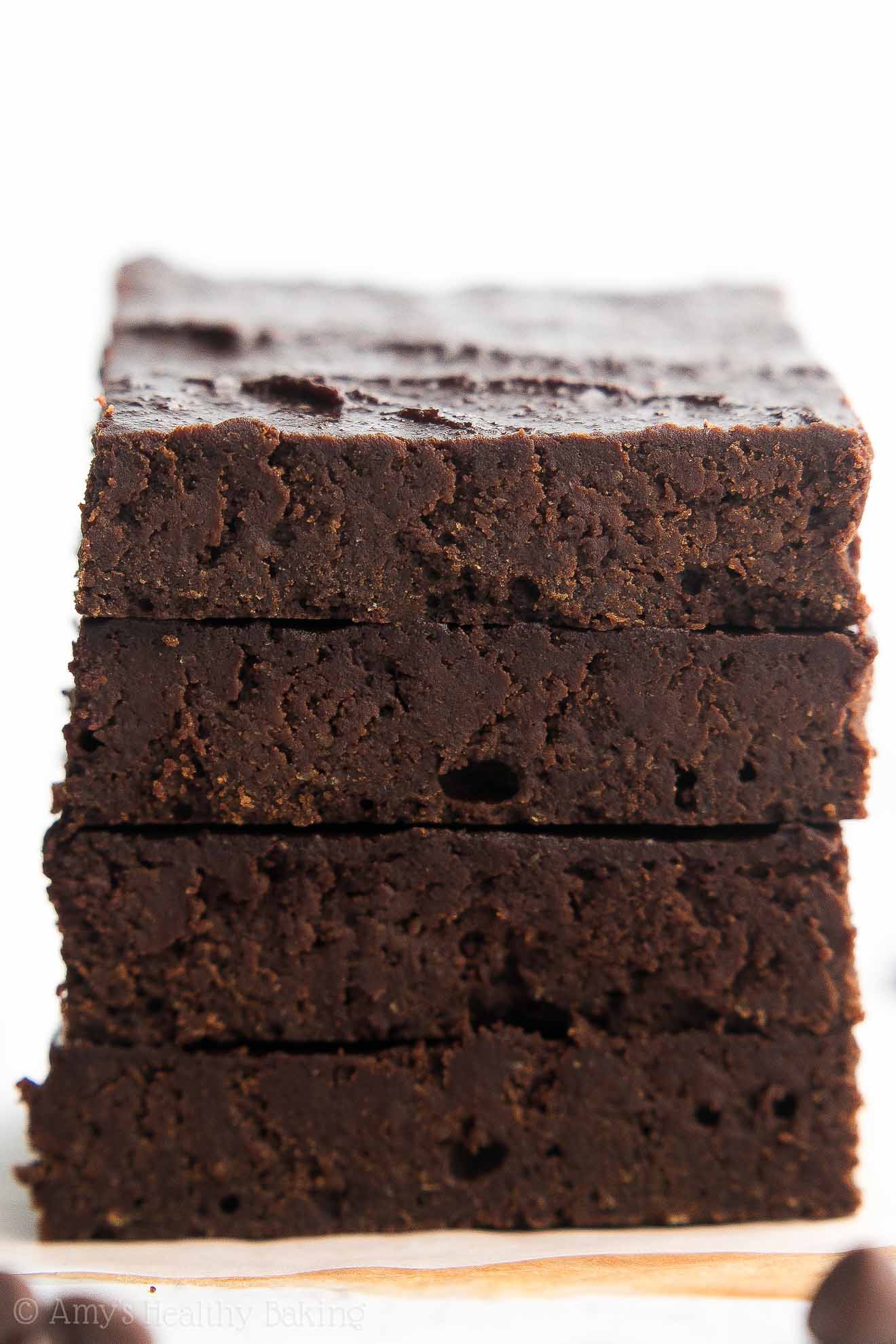 During our Michigan food blogger retreat, Liz organized us into small groups to prepare breakfasts, lunches, and dinners. Each group took on two meals during the trip, and we cooked recipes from our own blogs to share with everyone else.

Tasked with dinner on the second evening, I partnered with Trevor to bake his wife Jennifer’s one-bowl brownies while the rest of our team whipped up the entrée and sides. As a chocoholic, I loved that “assignment!” 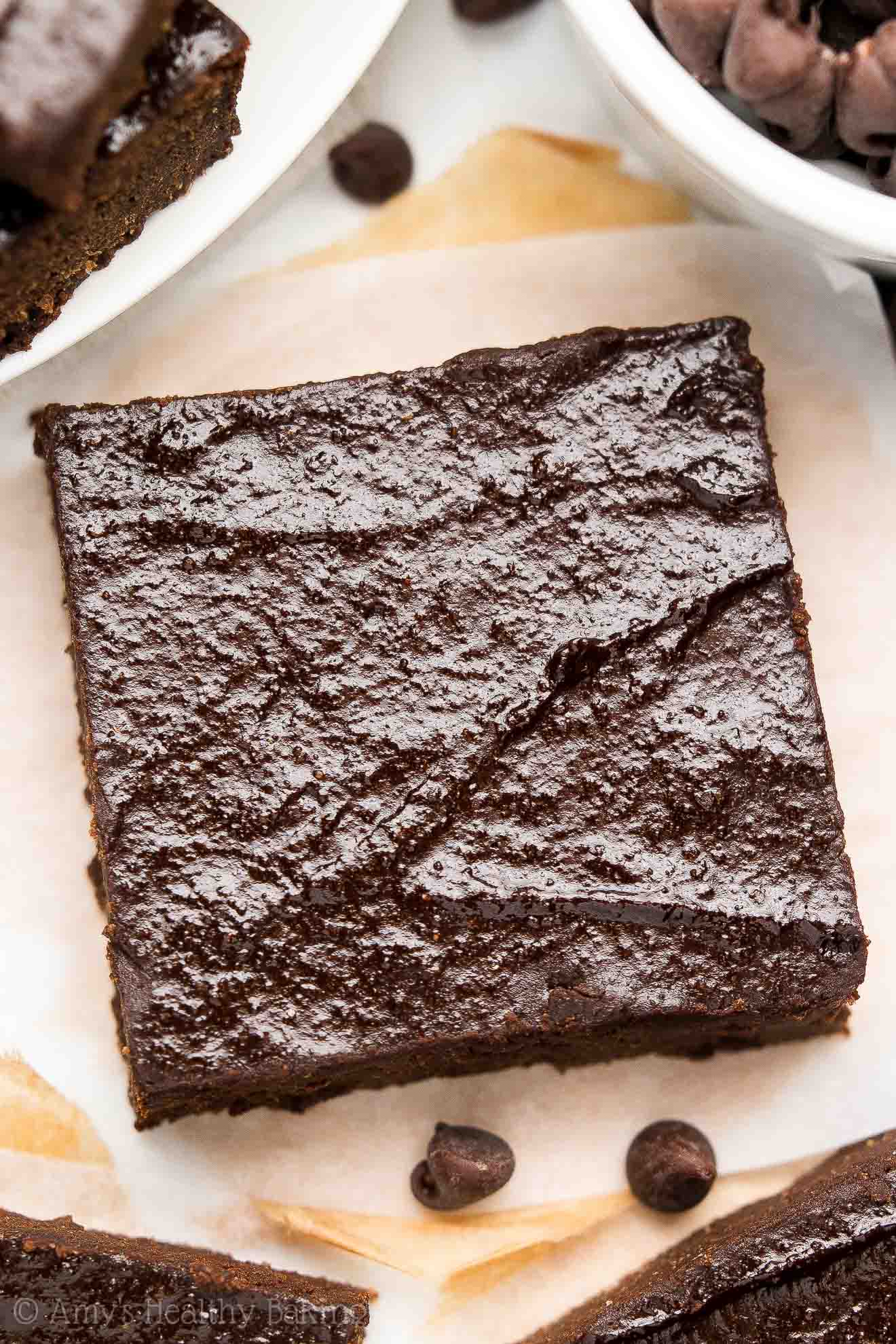 We made a few minor tweaks since the pantry lacked a few ingredients—melted butter instead of vegetable oil, chopped Ghirardelli chocolate bars instead of chocolate chips—and we baked the brownies in the only rectangular pan in the kitchen, which ended up being smaller and deeper than a traditional 9×13” cake pan…

But that resulted in extra fudgy and decadent brownies—always a plus in my book! When Trevor and I set out the pan after dinner, everyone excitedly dug in, and even Jennifer was amazed at how rich and irresistible they turned out! 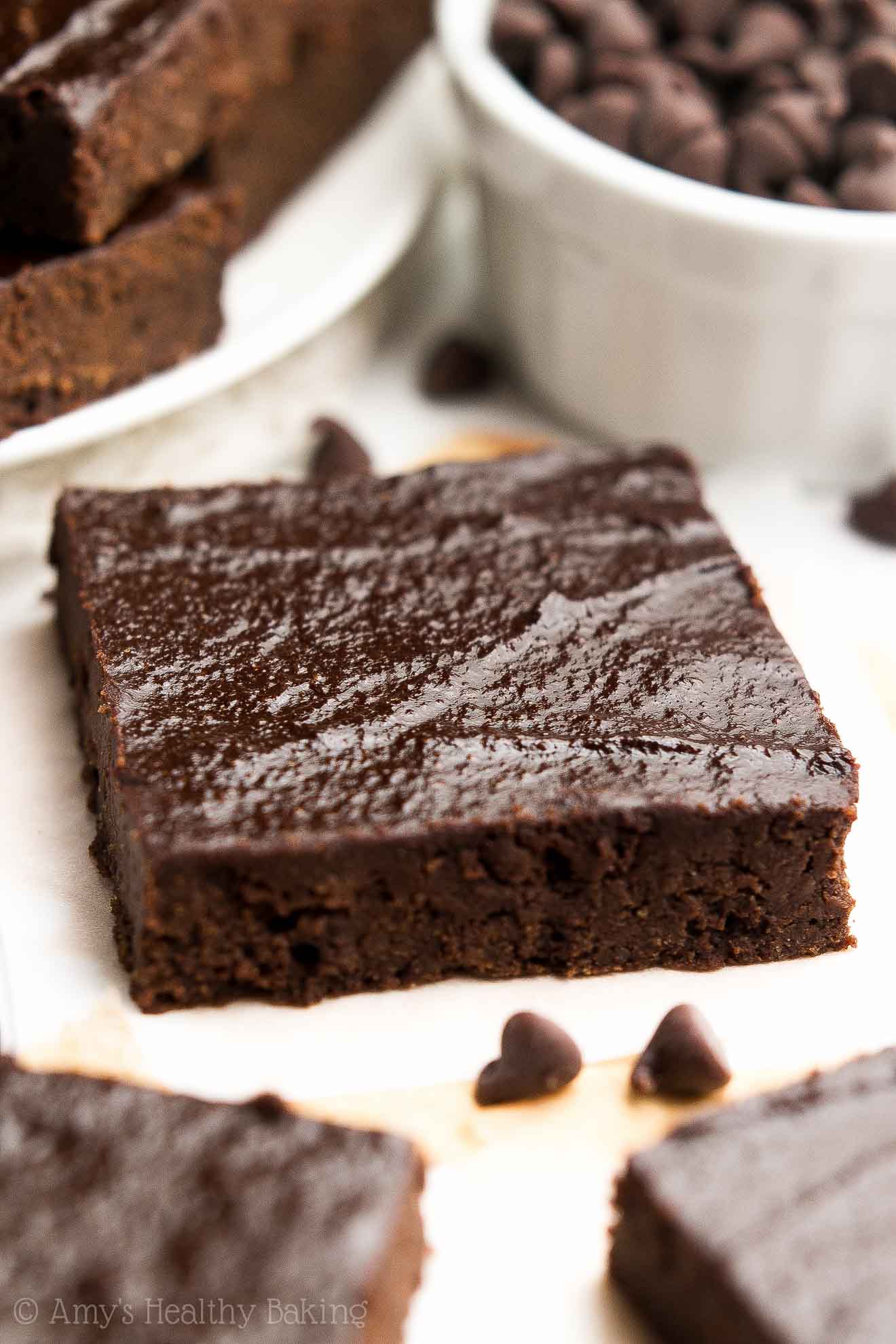 With the idea of a healthier version of those brownies rolling around in my head since that trip, I finally perfected my recipe. These Healthy One-Bowl Fudgy Brownies are just as incredible (and easy!) as the ones Trevor and I made! Supremely fudgy, extremely rich, extra chocolaty… But just 68 calories!

In other words… My chocoholic heart’s dream come true! 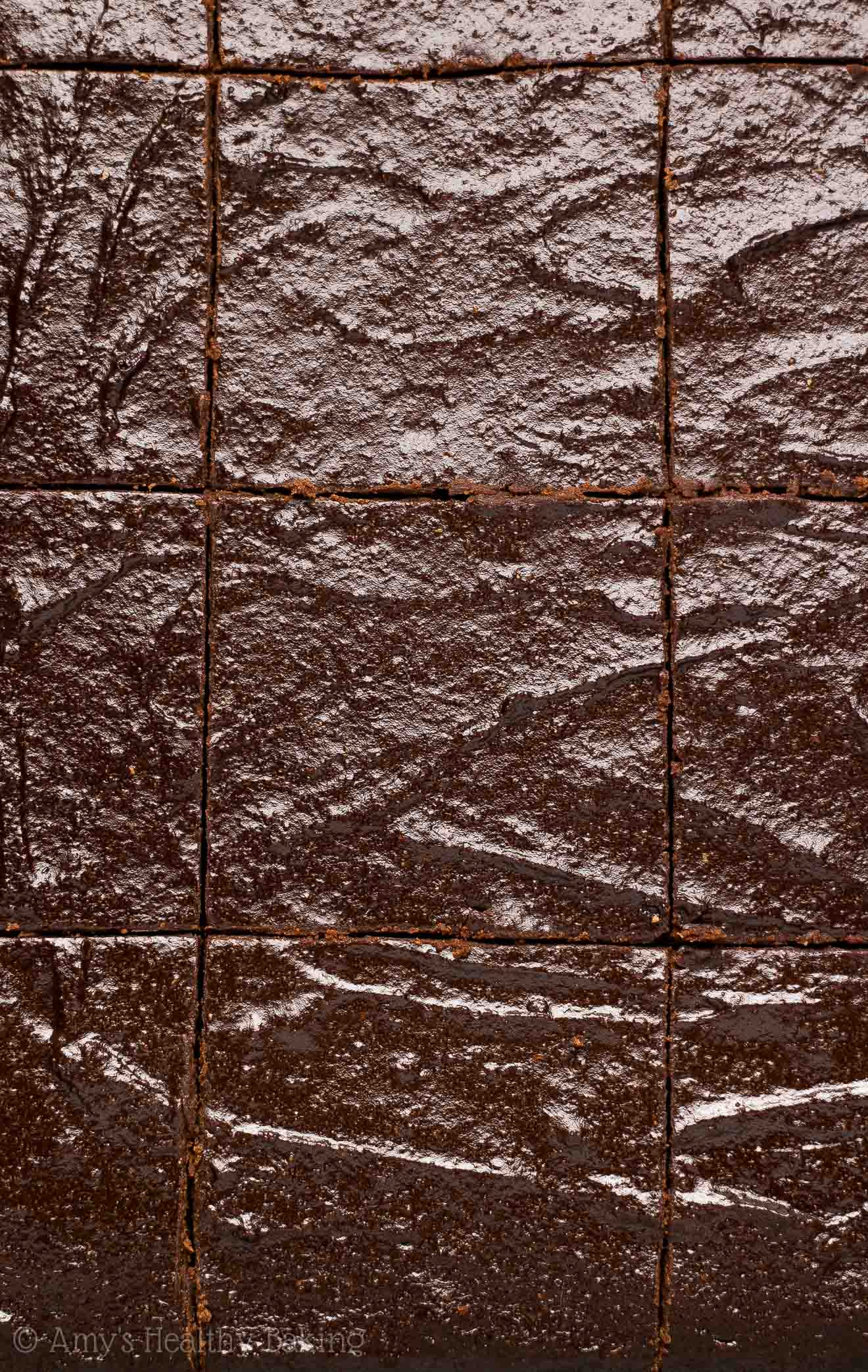 For the decadent chocolate flavor, you’ll use cocoa powder (like this!). Yup, that’s it! No chocolate to melt (or extra dishes to wash!) in this easy recipe. Can you tell I’m doing a little happy dance about fewer dishes? ? And for the supremely fudgy factor, you’ll mix in Greek yogurt instead of extra butter or oil. It adds the same moisture to your batter, and it gives your brownies a protein boost, too! 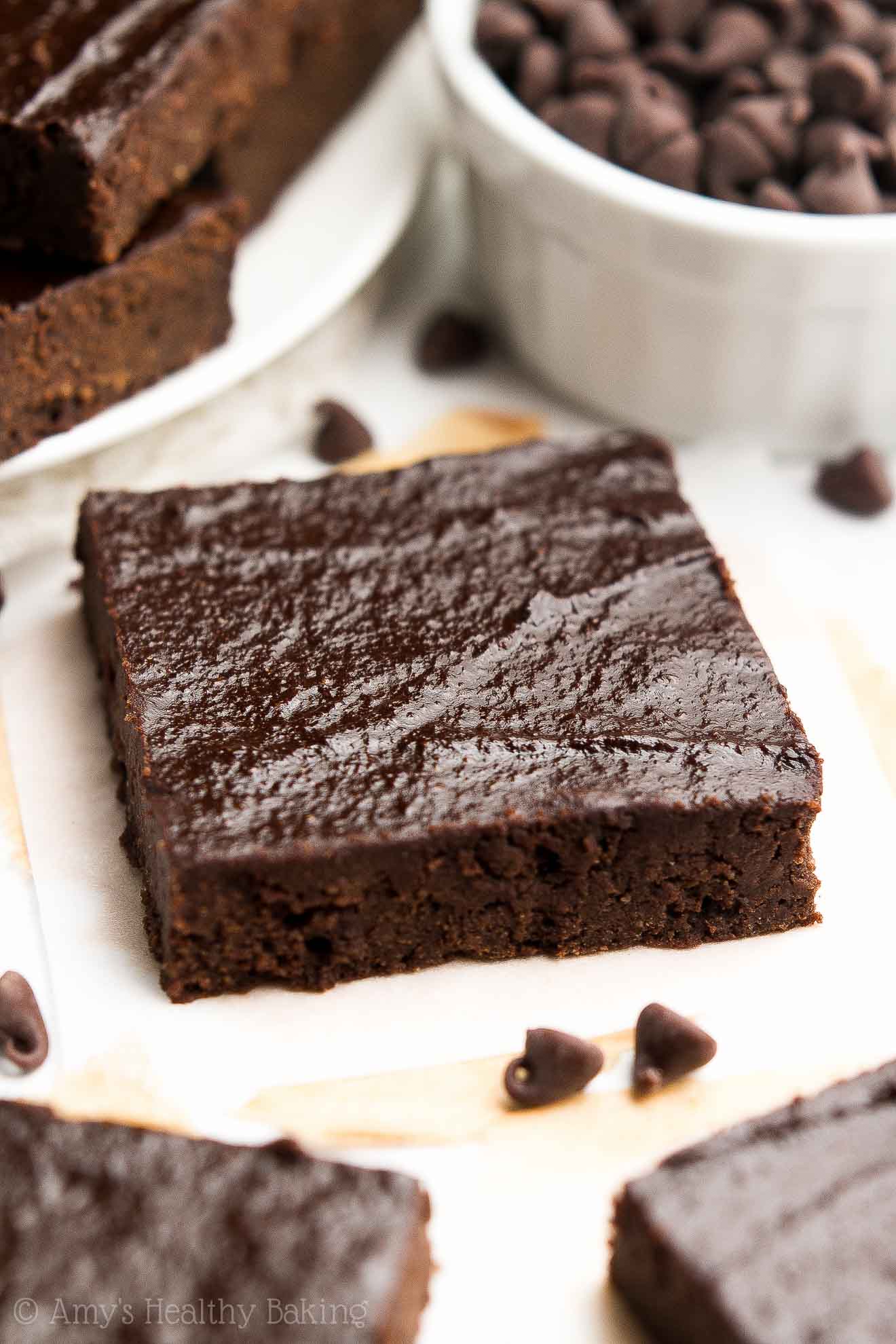 One last very important tip… It’s crucial that you follow the instructions precisely, especially with the ingredients’ order of addition. This recipe won’t turn out right if you just dump everything into the mixing bowl and stir. As much as I wish it were otherwise…

So add the ingredients in the order instructed (just like in my recipe video below!), stir with a fork (no mixer required, aka yet another thing you don’t have to wash!), wait for at least 6 hours for the fudgiest brownie texture, and… 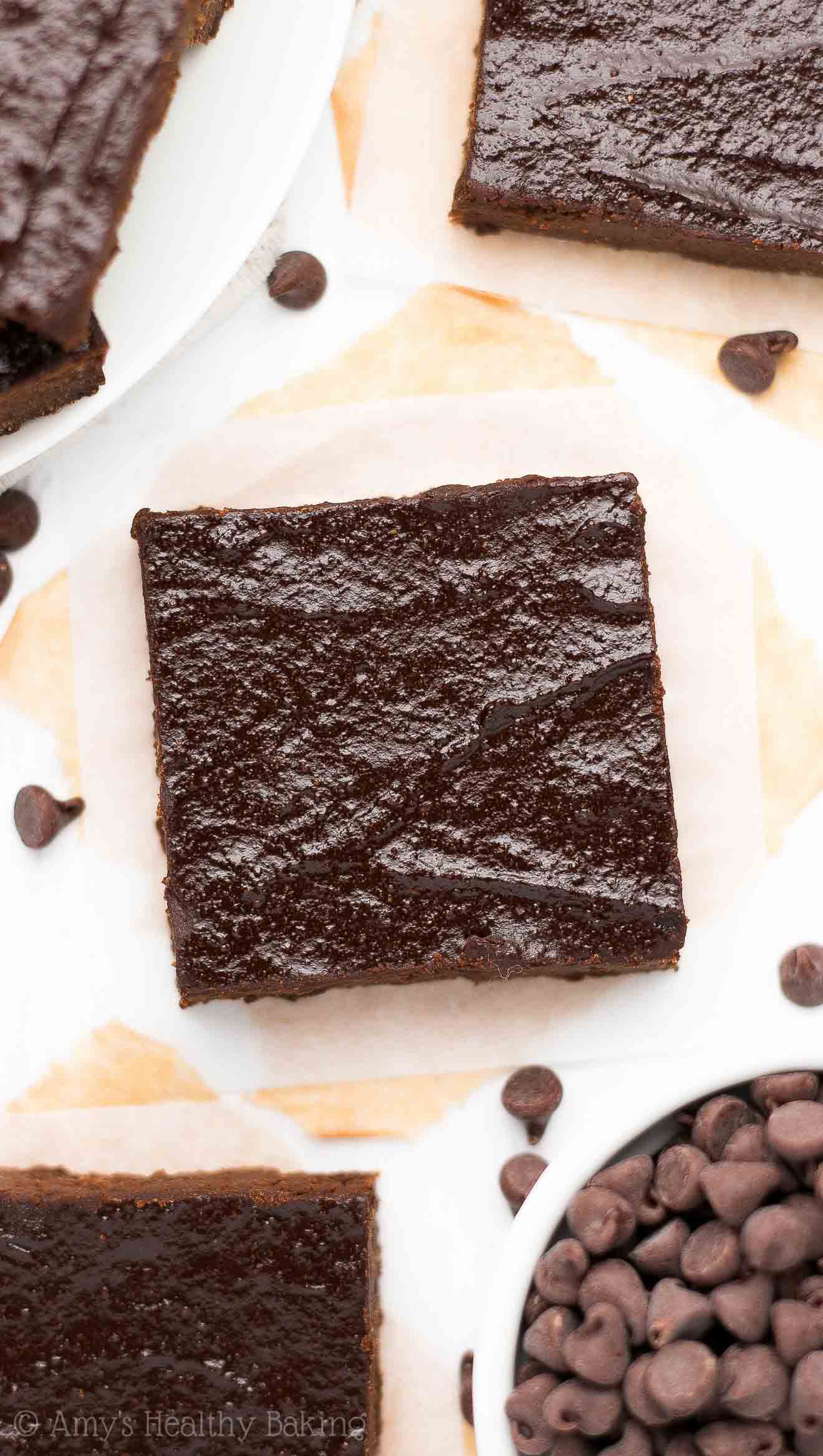 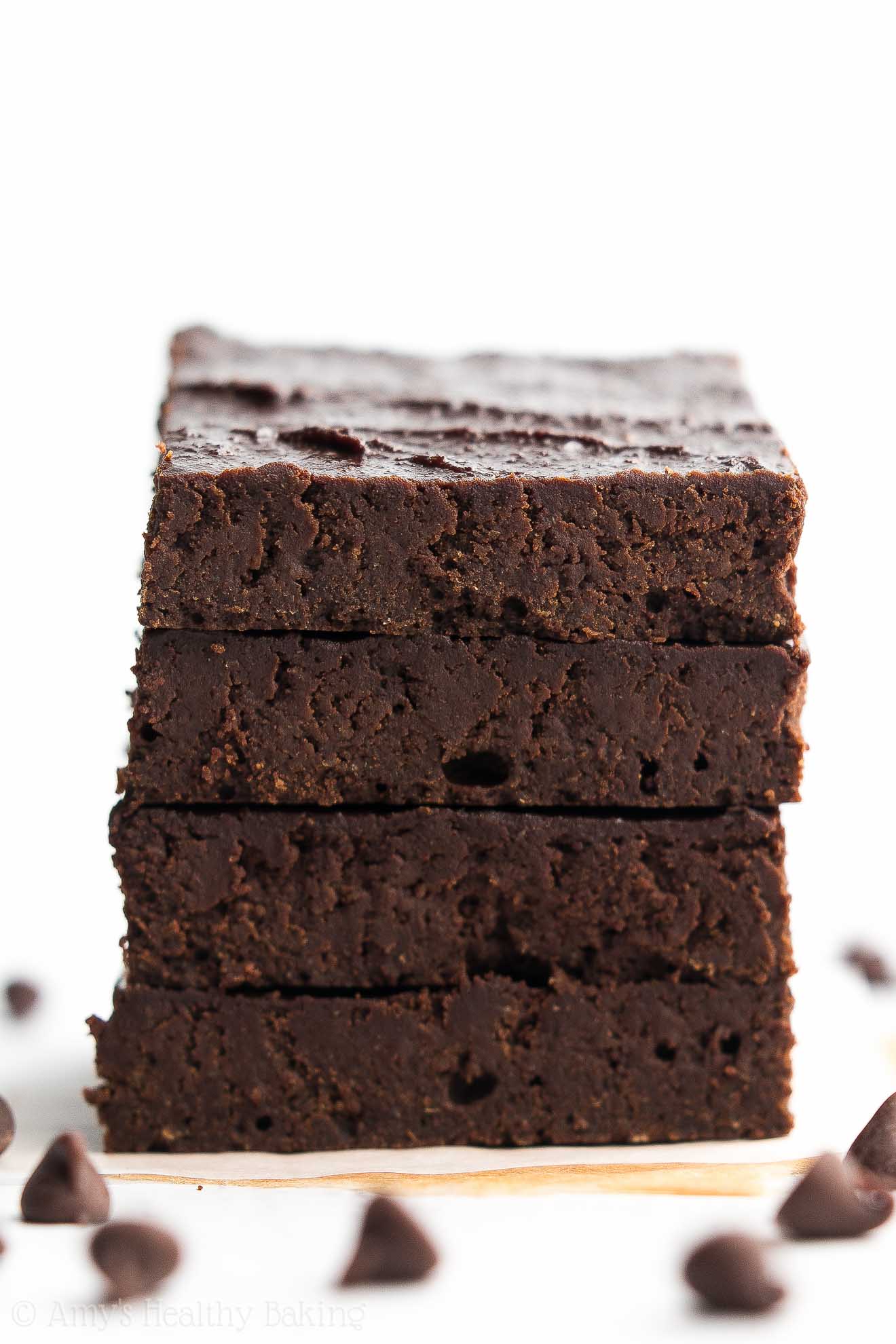 Enjoy your supremely fudgy and chocolaty dessert! And when you make your own, remember to snap a picture and share it on Instagram using #amyshealthybaking and tagging @amyshealthybaking IN the photo itself! (That guarantees I’ll see your picture! ?) I’d love to see your brownies and feature them in my Sunday Spotlight series!

Click here to PIN the recipe and save it for later!
These brownies are a chocoholic’s dream come true! They’re supremely rich and fudgy, with a deep dark chocolate flavor (similar to 72% dark chocolate). They’ll keep for at least one week if stored in an airtight container in the refrigerator.
Notes: Follow the instructions precisely for the best results! The order of addition and order of mixing together ingredients is very important. Do not use a stand or electric mixer! Use a whisk where instructed and a fork for everything else.

If you’d prefer, ½ cup (120mL) of pure maple syrup, honey, or agave may be substituted for the coconut sugar and ¼ cup of the milk. (You still need to add that 1 final tablespoon of milk!)

The Healthier Chocolate Treats cookbook is perfect for any and all chocolate lovers. Whether you enjoy chocolate occasionally or every single day (that’d be me!), there are plenty of goodies inside for you! Healthier Chocolate Treats contains 50+ brand new healthier recipes. These recipes have never been seen before or appeared on my blog. You won’t find them anywhere else! And yes—every single one contains some form of chocolate. Whether you prefer milk, dark or white, there are lots of treats inside for you!     What Inspired You to Write Healthier Chocolate Treats? I have always loved chocolate. Every Halloween throughout my childhood, I inverted the entire contents of my bright orange jack-o-lantern bucket … END_OF_DOCUMENT_TOKEN_TO_BE_REPLACED