Tender cinnamon rolls with gooey spirals of cozy cinnamon filling. Sweet, satisfying & completely guilt-free with just 56 calories! The BEST you’ll ever have!
Click here to PIN the recipe and save it for later! 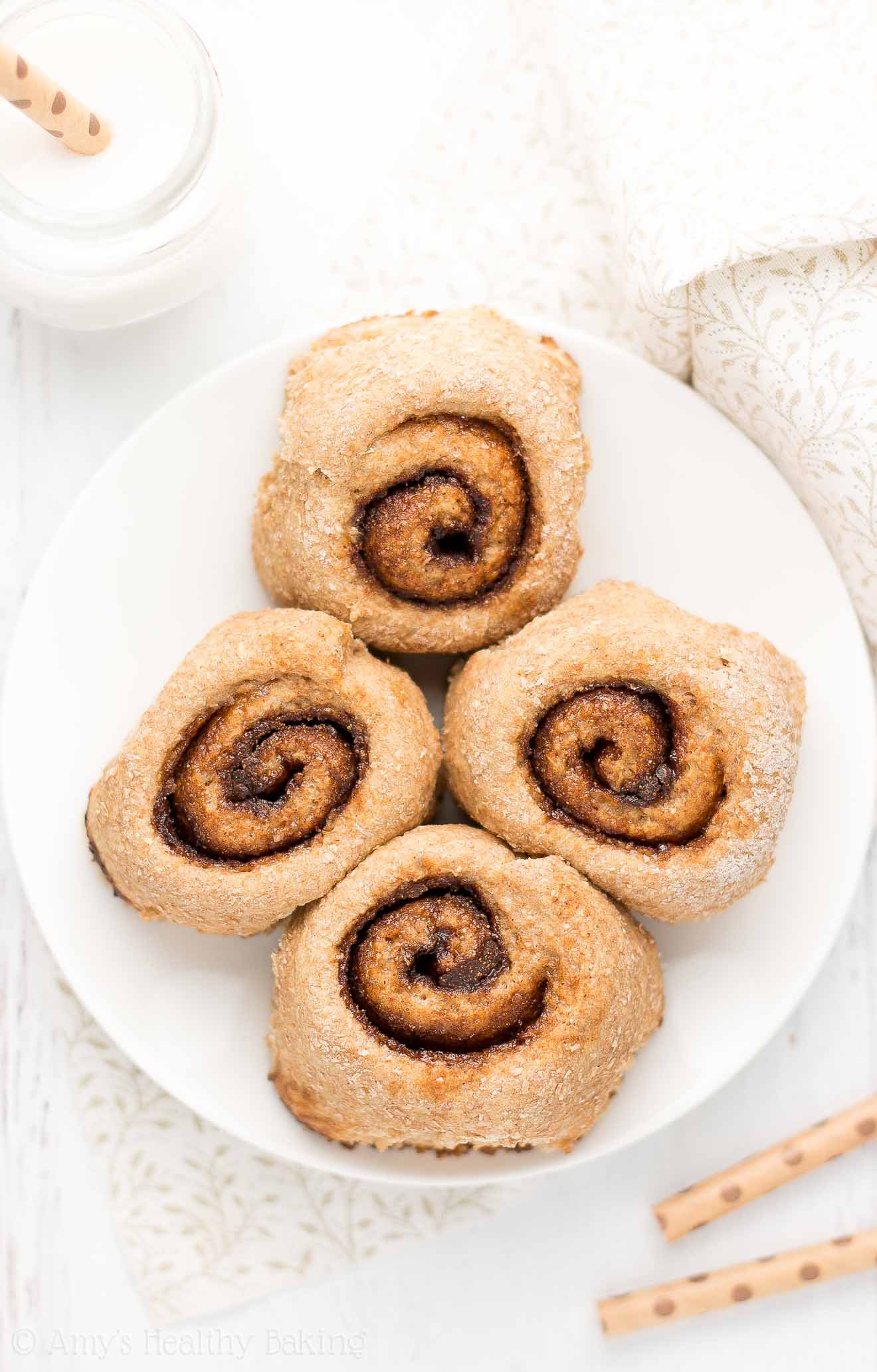 For a couple of years, my parents purchased a mini season ticket package to the Oakland A’s games, so any weekend the team played at home, we divvied up the baseball tickets. My parents usually went to at least two of the three games themselves, and sometimes they offered the third game to me—or bought an extra ticket so all three of us could go!

Although easy to drive to, the stadium only offered the basic ballpark foods: hot dogs, peanuts, popcorn, nachos, pizza… And not much else. I quickly learned to pack my own snacks if I wanted to eat anything healthy during the games! 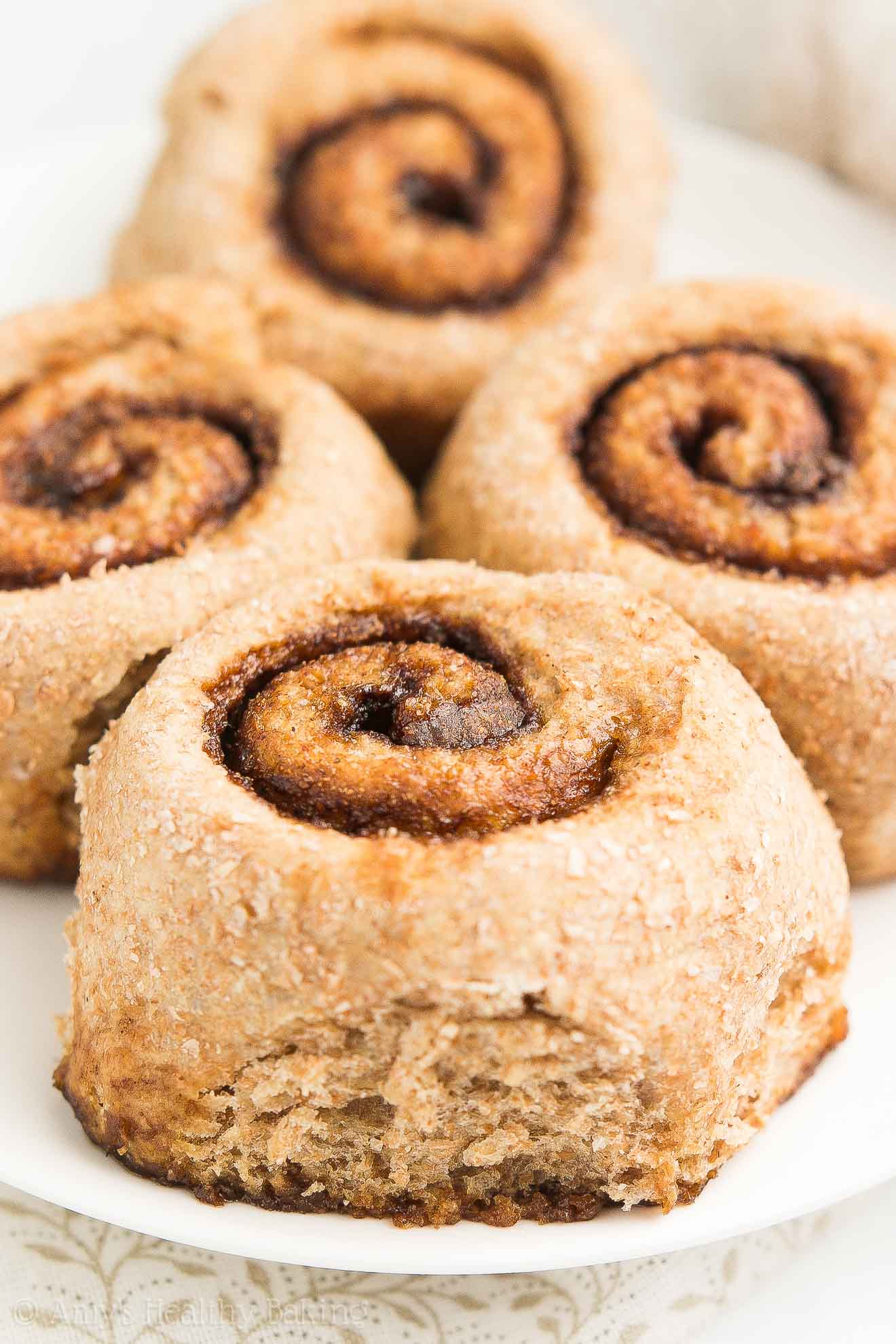 Yet my parents didn’t mind the limited options. Dad always headed straight for the sausage stand as soon as we entered the ballpark to get his favorite “atomic hot link” topped with plenty of bell peppers and onions, and Mom usually opted for plain nachos or a kids’ meal with a hot dog, chips, and a small soda.

Partway through the season, Mom realized the Round Table Pizza stall offered other options besides personal-sized pizzas, including mini cinnamon twists… Dough coated with cinnamon sugar, twisted into corkscrew spirals, baked, and served with a side of vanilla icing.

She swore they tasted like cinnamon rolls, and she waited in that Round Table line to buy some almost every single game! 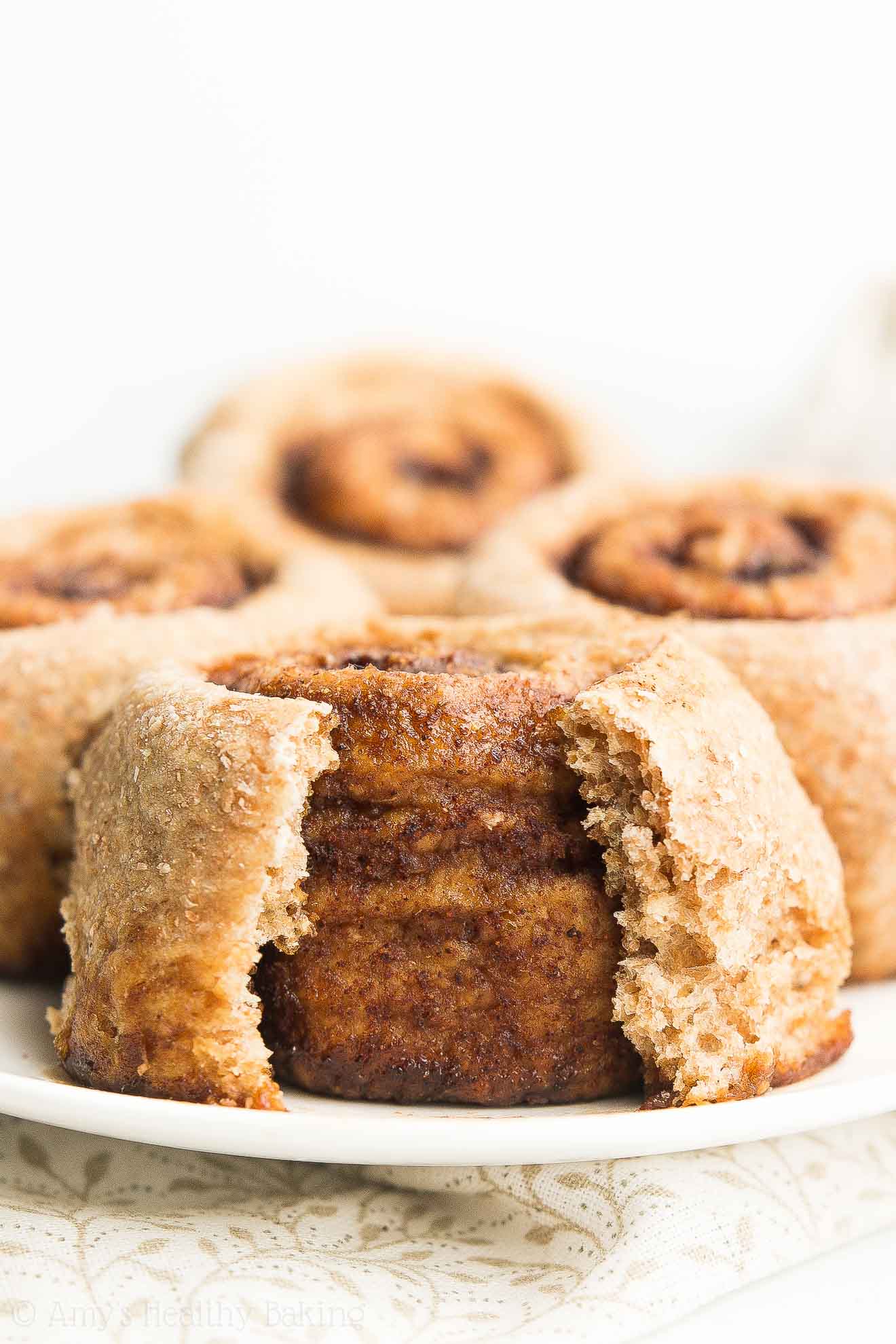 With Spring Training baseball just a month away, we’ve already started talking about what games to attend this year, which means I’m already thinking about ballpark food… So in honor of Mom’s favorite stadium treat, I baked a batch of these Ultimate Healthy Mini Cinnamon Rolls!

They’re light and fluffy with gooey spirals of cozy cinnamon filling, yet unlike those ballpark twists, these contain no refined flour or sugar. And they’re just 56 calories!

I have a feeling I may bake plenty of batches of these this upcoming baseball season! ? 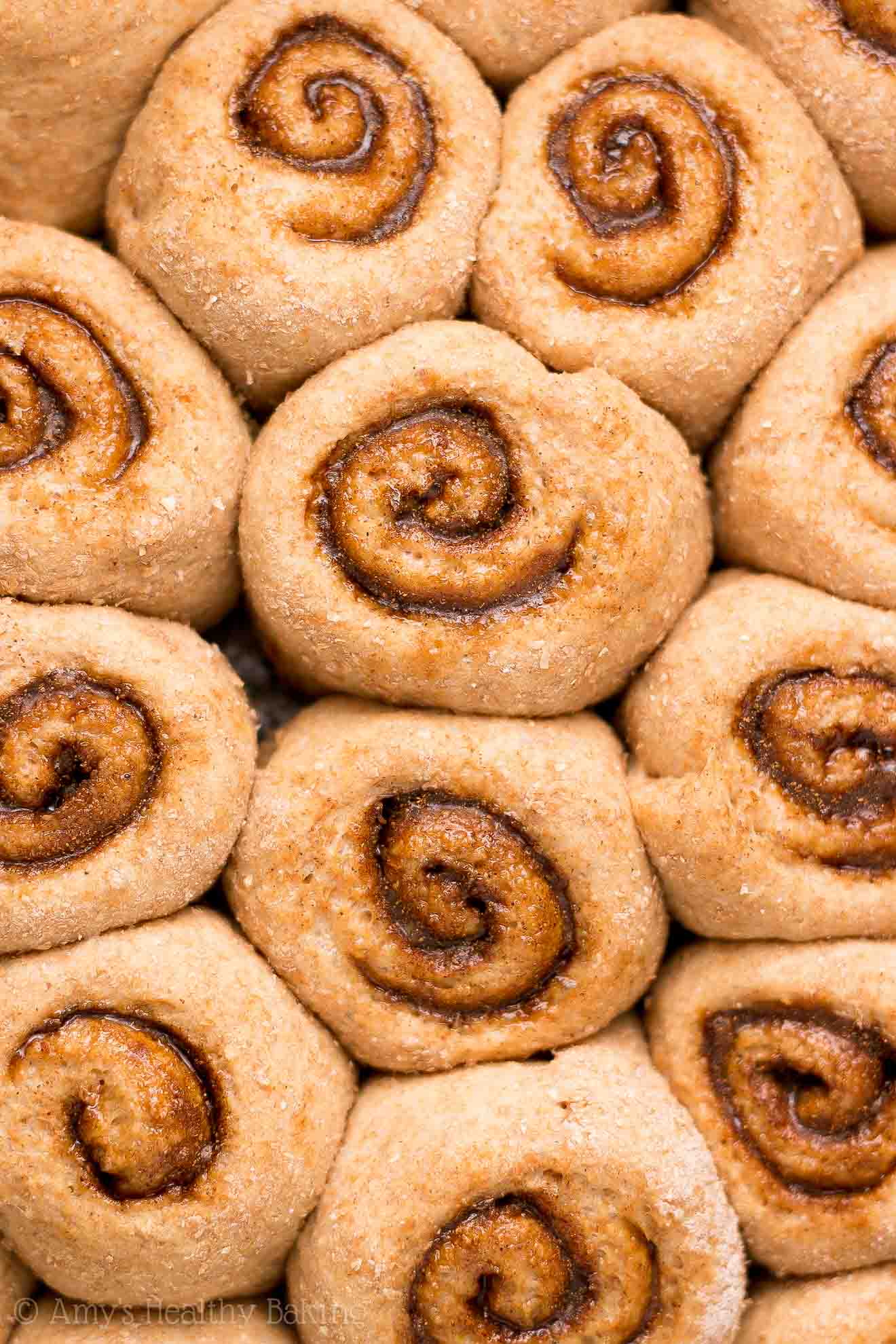 To make these, you’ll start with a few key ingredients…

♡ Yeast. I always use Red Star Yeast because it performs the best out of any yeast I’ve tried, and it makes my cinnamon rolls rise twice as tall! Other yeasts don’t rise nearly as much. Their quick rise yeast, active dry yeast, and platinum yeast all work equally well.

♡ Warm milk. Not hot—you don’t want to kill the yeast! Stick your pinky finger into the milk. If it feels like a hot tub, but not scalding, that’s the right temperature. 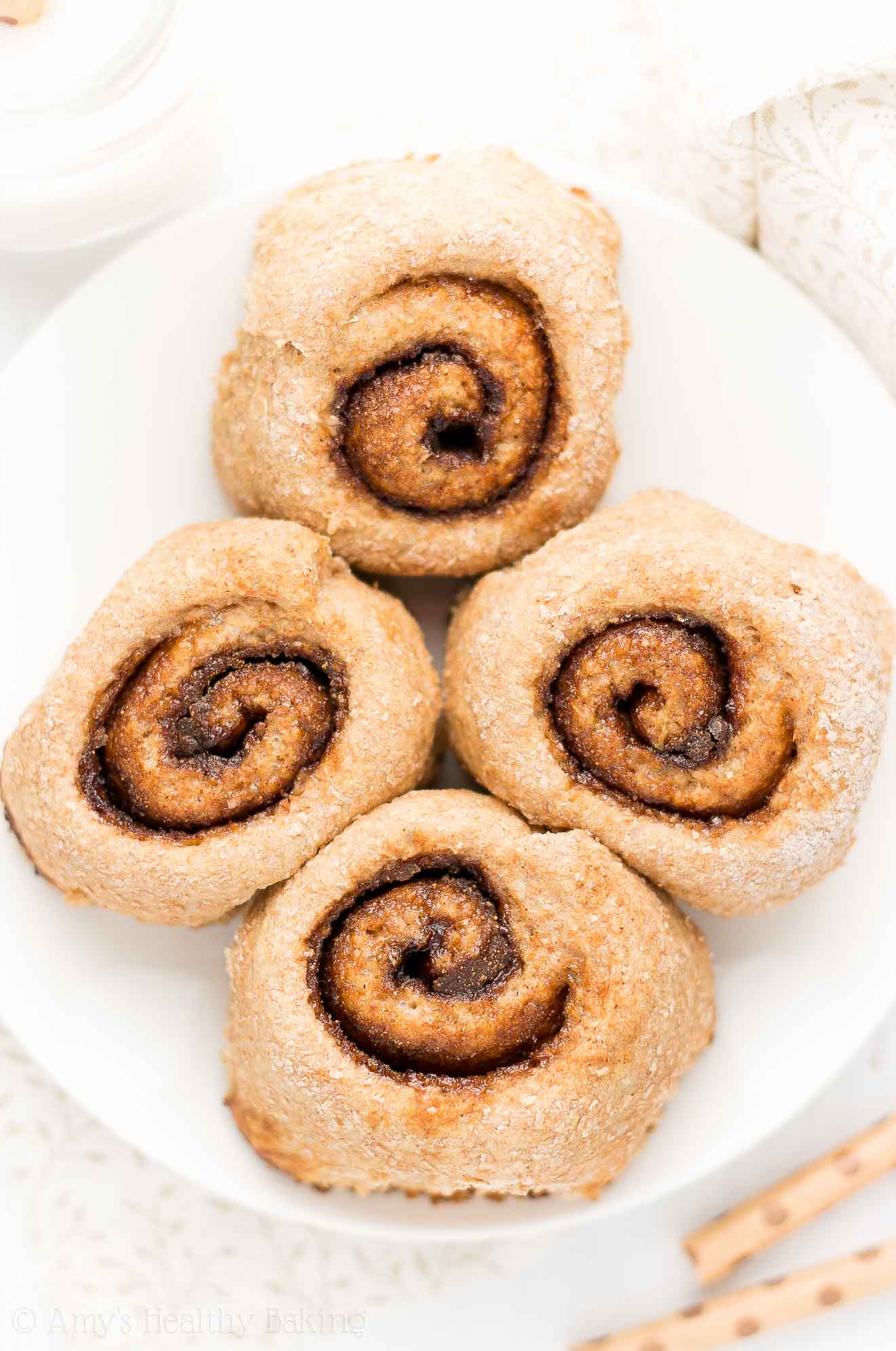 ♡ Coconut sugar. It’s exactly what it sounds like… An unrefined sweetener that comes from coconuts! However, coconut sugar (like this!) does not actually taste like coconut. It has a caramel-like flavor very similar to brown sugar!

♡ Salt. To balance the flavors… But also to play a role in the yeast’s activation! 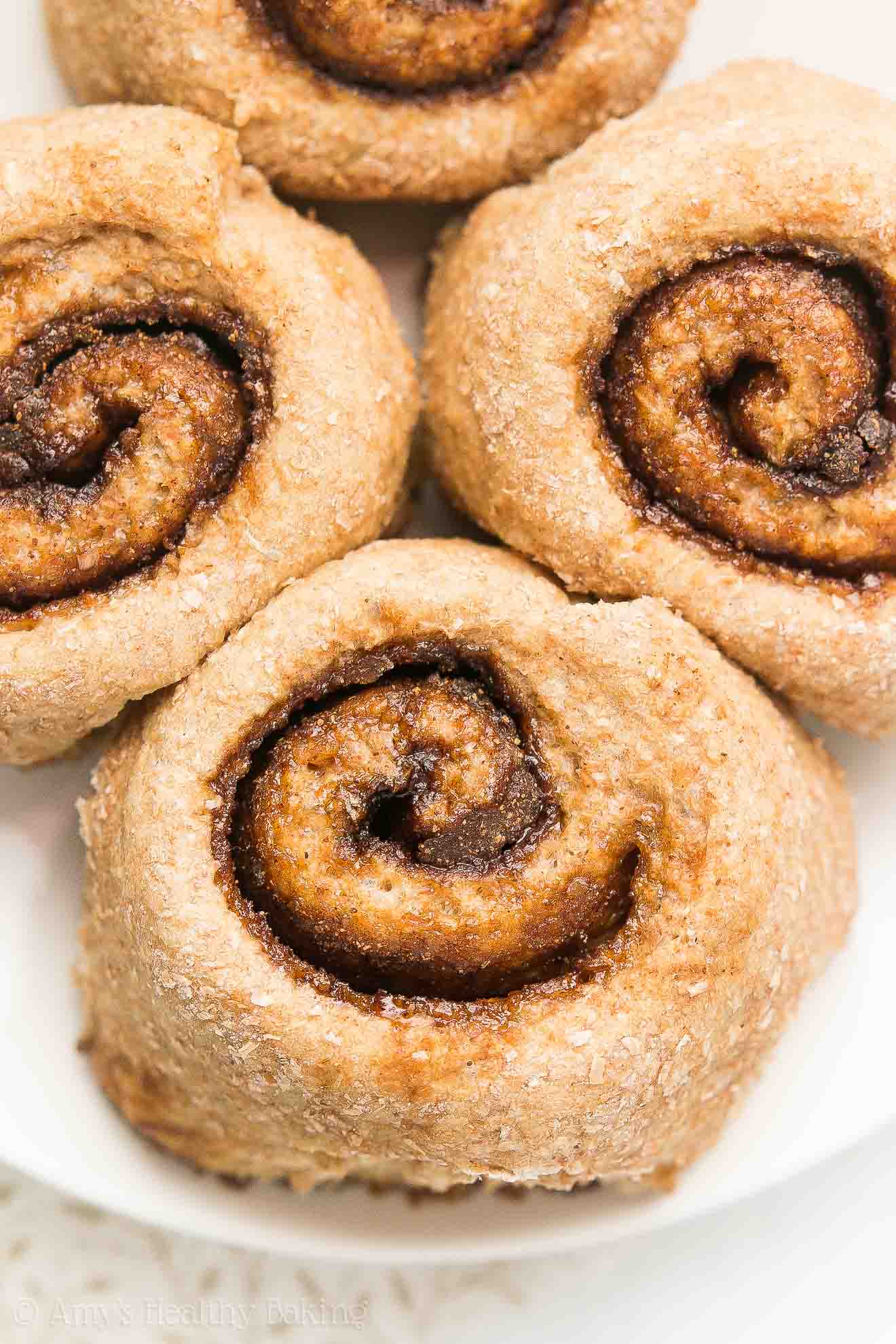 Once you’ve mixed those into a dough, it’s time to knead! I always knead by hand. It’s so relaxing and soothing, and I love the feeling of dough beneath my palms. You can watch my video here, located just above the recipe, to see my tips and how I knead!

Then roll out your dough into a large rectangle, and cut the rectangle in half so you end up with two long and really skinny rectangles. Brush each half with a tiny bit more melted butter, and sprinkle with the coconut sugar + cinnamon filling (I’m obsessed with this cinnamon… it has such a deep, rich, slightly sweeter flavor, and it’s really inexpensive!). Roll each half into a log, and pinch the ends to seal. 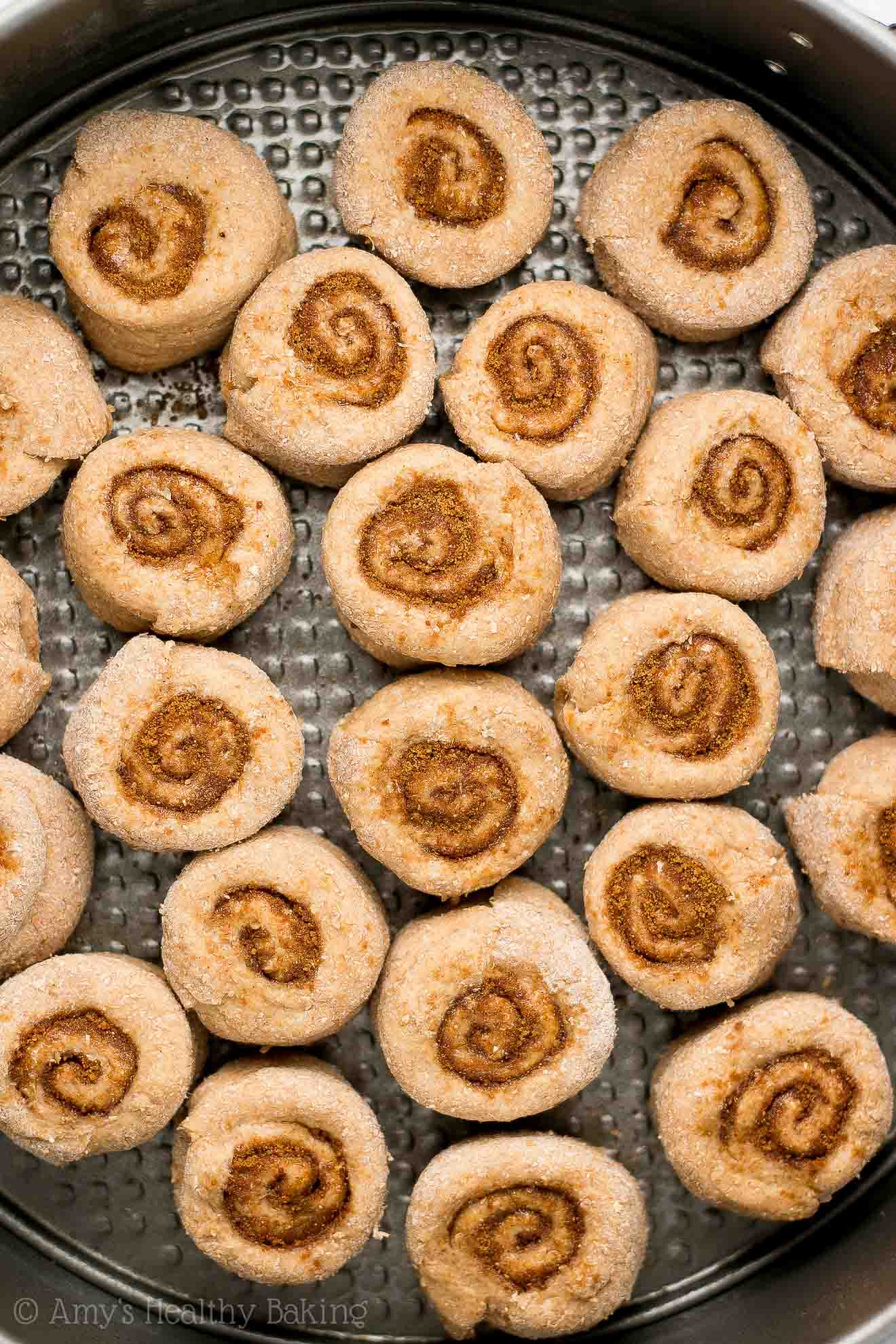 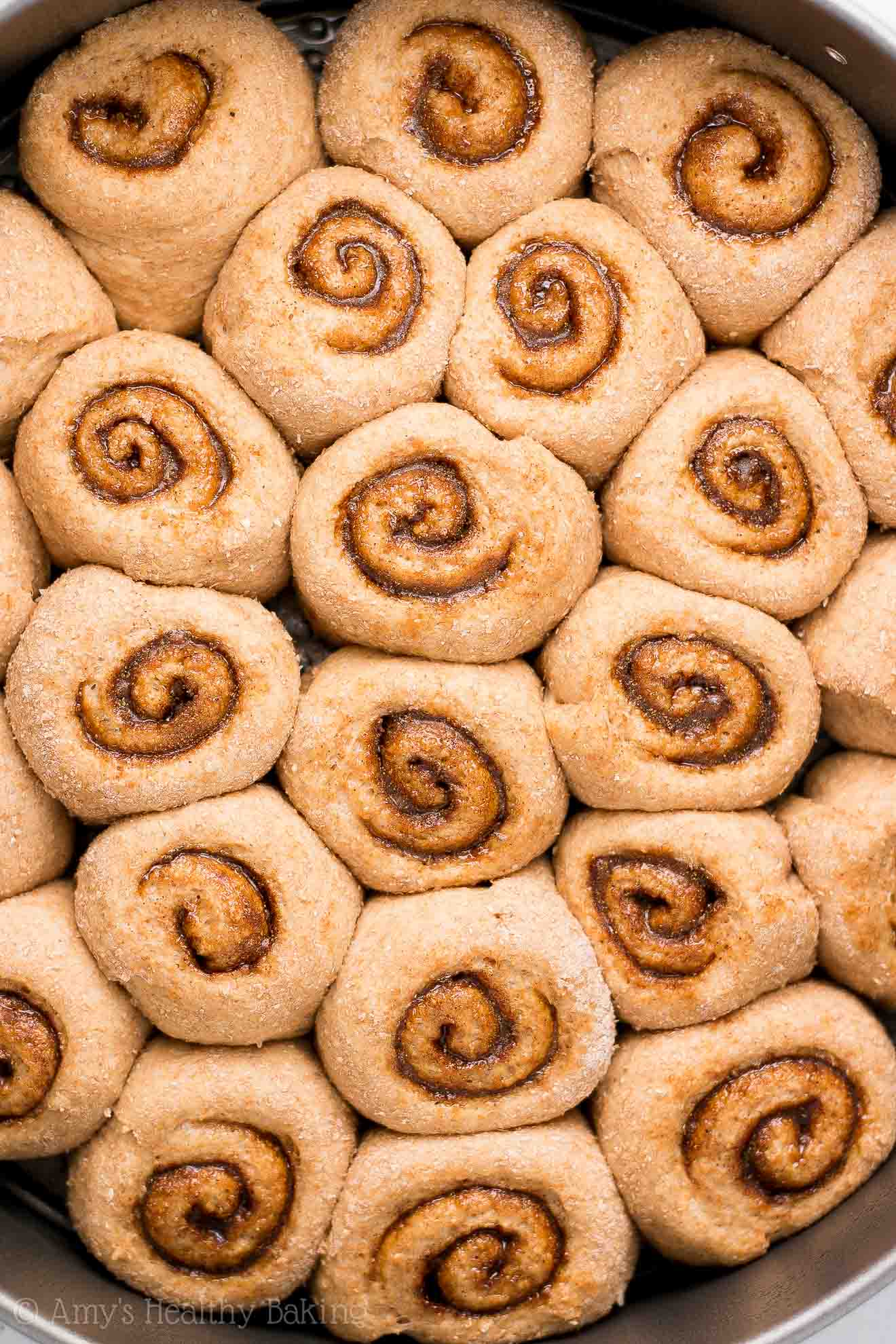 Once you’ve placed your little cinnamon rolls in the pan, cover the top with a dry towel, and place them in a warm spot to double in size. It’s like magic when you come back 45 minutes later and see how much they’ve grown! Then after a quick trip into the oven… 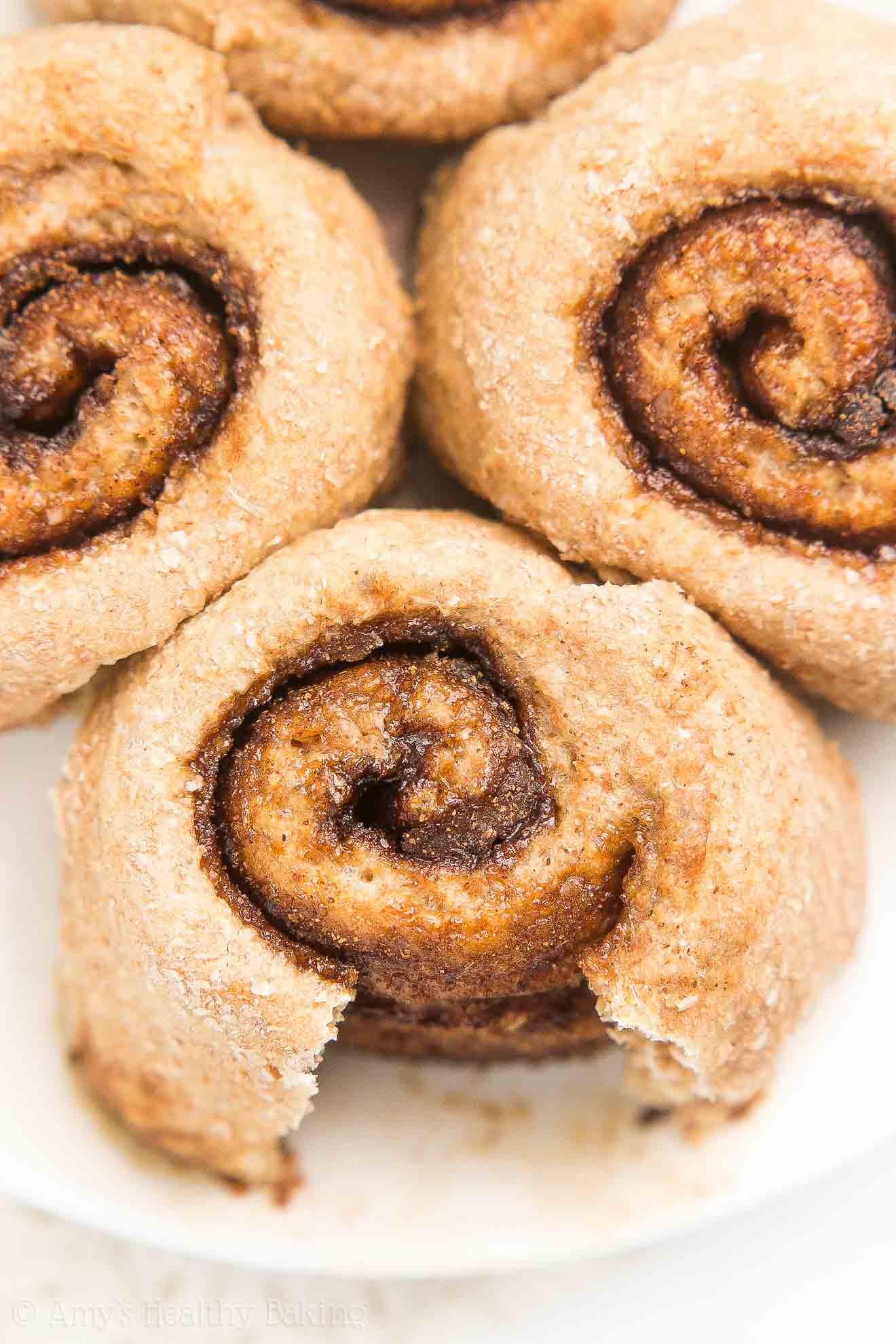 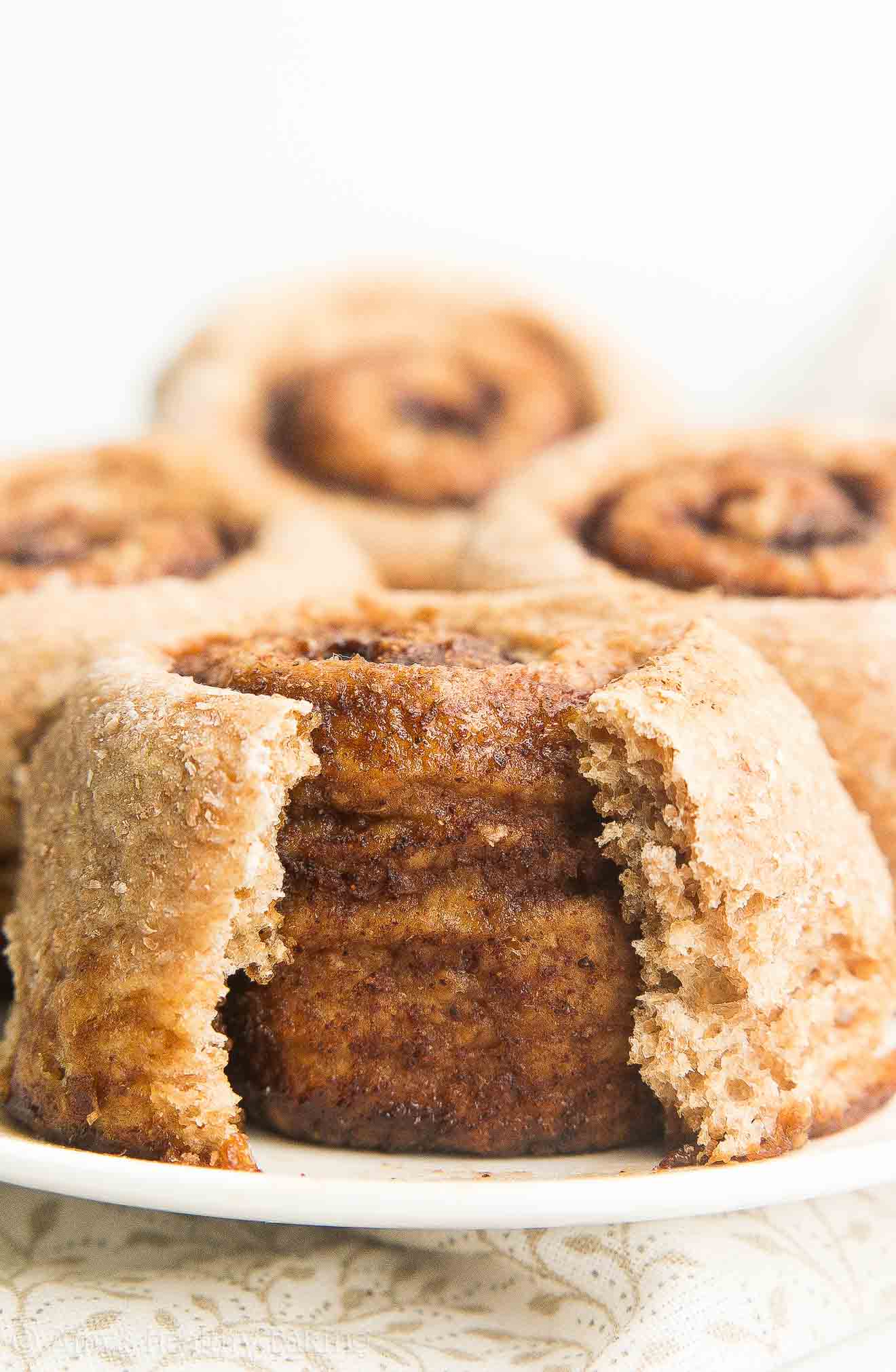 Time to eat! ?? And when you make your own, remember to snap a picture and share it on Instagram using #amyshealthybaking and tagging @amyshealthybaking IN the photo itself! (That guarantees I’ll see your picture! ?) I’d love to see your mini cinnamon rolls!

Click here to PIN the recipe and save it for later!
Yields: 24 mini cinnamon rolls
These little cinnamon rolls taste heavenly! They’re light and fluffy with gooey spirals of cozy cinnamon filling. Leftovers will keep for at least three days if stored in an airtight container on the counter or one week if stored in an airtight container in the refrigerator.
Notes: I highly recommend using a 10”-round springform pan, like this! Springform pans have taller sides than most traditional cake pans, so this allows your cinnamon rolls to rise properly without touching the top of the towel in Step 6. (If you don’t own a 10”-round pan, substitute a 9”-square pan instead.)

For the yeast, I used Red Star® Quick Rise Yeast. It performs the best out of any yeast I’ve used, so I highly recommend it! It always easy to find in grocery stores, so I buy mine online here. (Their rapid rise yeast, regular active dry yeast, and platinum yeast all work equally well!)

For an extra treat, I recommend this cinnamon! It has a warmer, fuller, slightly sweeter flavor than regular cinnamon. (And it's really affordable!)

If you prefer, you can make 12 regular-sized cinnamon rolls instead. Use a 9”-round pan (a springform pan like this is best!), and leave your dough as a 16x10” rectangle (do not cut into two 16x5” rectangles!) in Step 5. Bake at 350°F for 18-22 minutes or until the filling is bubbling and the sides feel firm.

To see how these cinnamon rolls are made, watch my video here (located just above the recipe).

The Healthier Chocolate Treats cookbook is perfect for any and all chocolate lovers. Whether you enjoy chocolate occasionally or every single day (that’d be me!), there are plenty of goodies inside for you! Healthier Chocolate Treats contains 50+ brand new healthier recipes. These recipes have never been seen before or appeared on my blog. You won’t find them anywhere else! And yes—every single one contains some form of chocolate. Whether you prefer milk, dark or white, there are lots of treats inside for you!     What Inspired You to Write Healthier Chocolate Treats? I have always loved chocolate. Every Halloween throughout my childhood, I inverted the entire contents of my bright orange jack-o-lantern bucket … END_OF_DOCUMENT_TOKEN_TO_BE_REPLACED